The Samsung 840 EVO is an mSATA SSD that is the first to hit the 1TB capacity point. Though it has a compact mSATA form factor, roughly a quarter of the size of a standard 2.5” SSD, it packs the performance punch of its larger siblings. Ultra-thin laptops have been limited in their storage capacity up until now. Taking advantage of Samsung’s advances in flash memory, the 840 EVO mSATA SSD will take portable computing capacity and speeds in ultra-thin computers that was previously unattainable. To get to the 1TB capacity point, Samsung uses a total of four flash memory packages, each having 16 dense layers of 128Gb TLC chips.

The Samsung 840 EVO is an mSATA SSD that is the first to hit the 1TB capacity point. Though it has a compact mSATA form factor, roughly a quarter of the size of a standard 2.5” SSD, it packs the performance punch of its larger siblings. Ultra-thin laptops have been limited in their storage capacity up until now. Taking advantage of Samsung’s advances in flash memory, the 840 EVO mSATA SSD will take portable computing capacity and speeds in ultra-thin computers that was previously unattainable. To get to the 1TB capacity point, Samsung uses a total of four flash memory packages, each having 16 dense layers of 128Gb TLC chips. 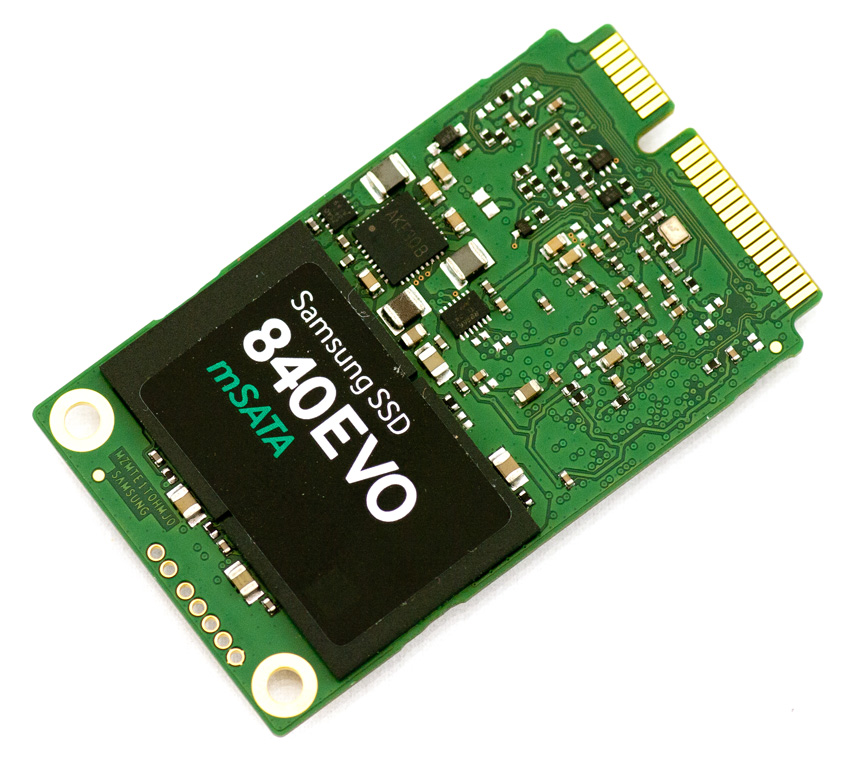 Another area where the 840 EVO mSATA SSD excels is security. Not only is the device self encrypting, like most SSDs, it also allows class 0 and eDrive to be enabled easily. The 840 EVO mSATA SSD is complaint with TCG Opal and IEEE 1667 standards. The drive is also compatible with the Samsung Magician drive management software suite, which is the most robust offering in the market. Lastly, it's worth noting that all core components come from Samsung themselves, including the drive controller, NAND and DRAM. This level of integration gives Samsung several advantages from drive design and support to pricing power in retail.

The Samsung 840 EVO mSATA SSD is about 40 percent smaller and 12 times lighter than the standard HDD or in other words about 1/3 the size of a standard business card. 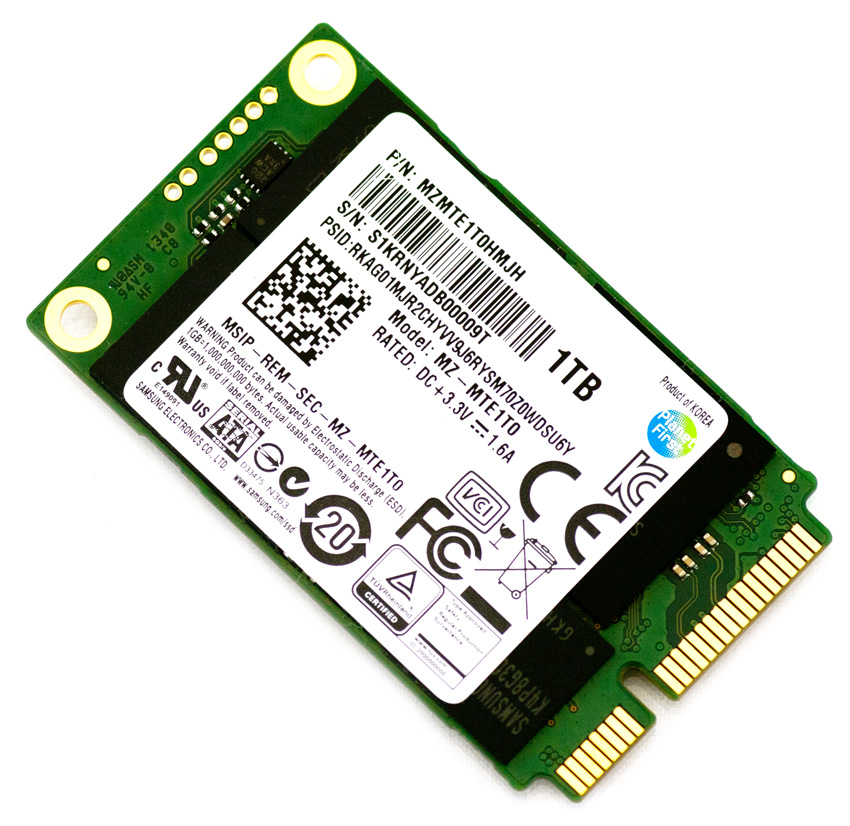 On the device itself is a large sticker that covers the components. Under the sticker hides the Samsung controller, DRAM cache, and two NAND packages. 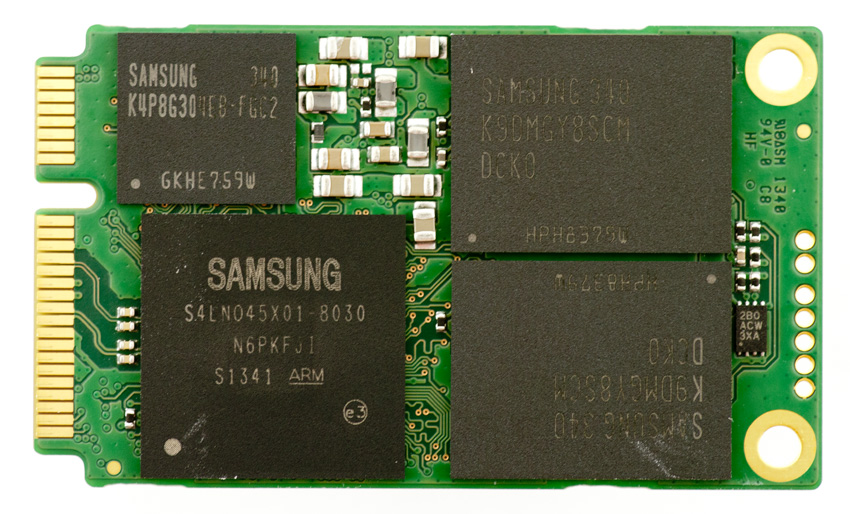 Flipping the device over reveals the other two NAND packages. All in all, squeezing 1TB of storage into this miniscule form factor is impressive engineering. 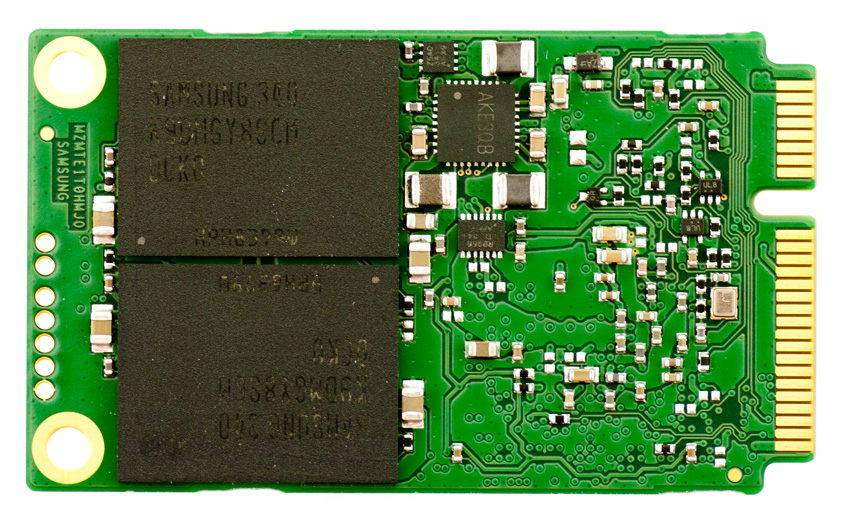 In our first benchmark we tested straight-line sequential performance using a 2MB transfer size. 840 EVO inched out the others to have a top read activity of 509 and a top write activity of 469 just ahead of the Intel 525 Repeating.

Our next test maintains the 2MB transfer size, but this time we are measuring random transfer speeds. This time the 840 EVO came in second to the Intel 525MB/s Repeating with read activity (measuring at 499MB/s and 504MB/s respectively) but came out on top with write activity with 484MB/s.

In our next test, we measure low queue depth random 4k read and write performance. Here, the 840 EVO came out on top with a little higher lead with 38.38MB/s read and 77.26MB/s write activity.

Next we measured random 4K throughput. The 840 EVO had quite the lead with read activity coming in with 9,826 IOPS (the next highest being the Intel 525 Repeating at 8143 IOPS). The 840 EVO was higher than the others with write activity as well at 19,780 IOPS.

Expanding our 4k test, we look at write latency of each SSD. Max latency is also important, although that number can change as the NAND experiences wear over time. We measured an average latency of 0.0500ms from the 840 EVO, which was the best of the group tested. However it’s max latency came in second at 5.914ms. 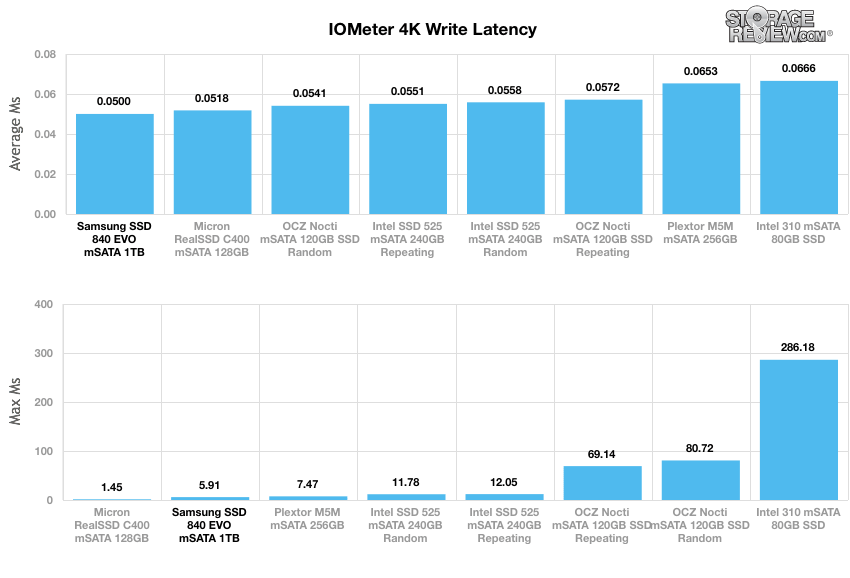 In our next test, we shift to a smaller 4k random workload with 100% read activity that scales from 1QD to 64QD. In this setting, the 840 EVO scaled from 9,958 IOPS up to 99,024 IOPS maintaining the top spot throughout the test. Shifting focus to write activity, the 840 EVO started out high but dropped slightly behind the Intel 525 (both repeating and random) and then pulled ahead in higher queue depths. The 840 EVO scaled from 20,156 IOPS and peaked at 90,072 IOPS before dropping down to 89,589 IOPS. 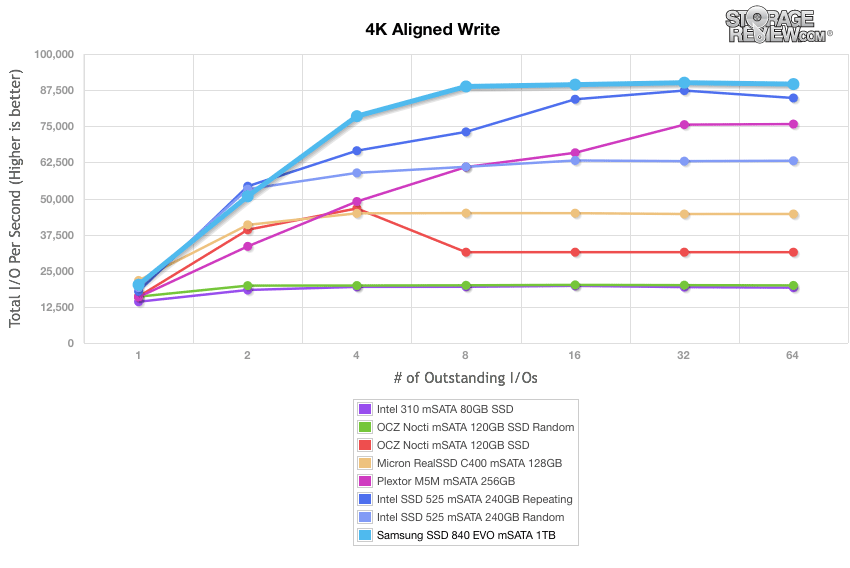 Our last series of synthetic benchmarks compare the hard drives in a series of server mixed-workloads with a queue depth of ranging from 1 to 128. Each of our server profile tests has a strong preference towards read activity, ranging from 67% read with our database profile to 100% read in our web server profile. In all of our mixed workloads, the Samsung 840 EVO ranked near the top of the pack running close with the Intel 525 Repeating.

The first is our database profile; with a 67% read and 33% write workload mix primarily centered on 8K transfer sizes. In the test, the 840 EVO was trading the top performer with the Intel 525 Repeating. Both peaked at Q64 with 45,277 IOPS and 45,286 IOPS respectively. 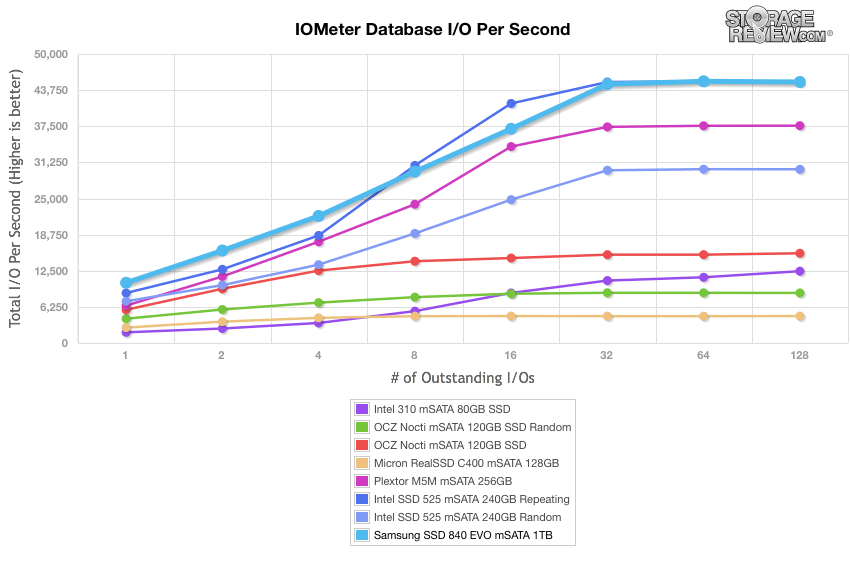 Our web server profile is read-only with a spread of transfer sizes from 512-byte to 512KB. The 830 EVO out performed all other drives from beginning to end. 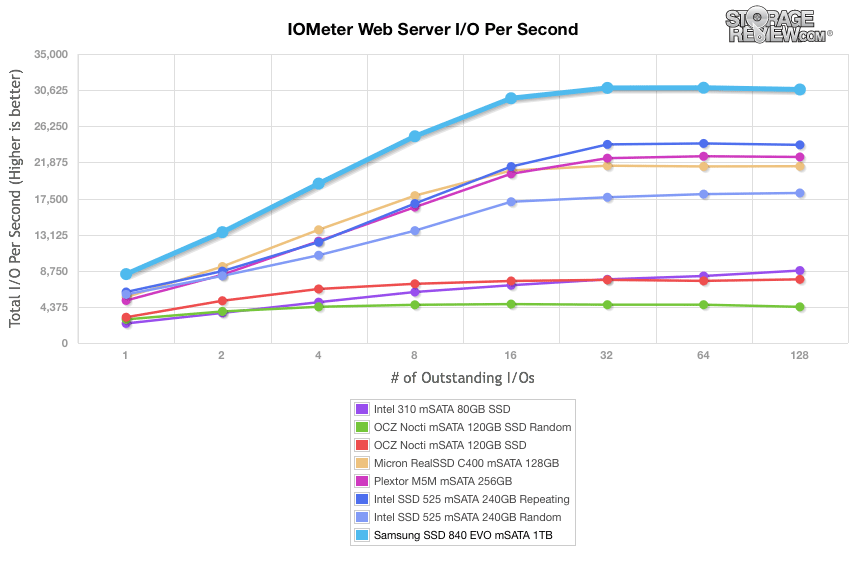 The next profile looks at a file server, with 80% read and 20% write workload spread out over multiple transfer sizes ranging from 512-byte to 64KB. The 840 EVO started off high but again began to trade the top spot with the Intel 525 Repeating. However it does finish on top peaking at 35,257 IOPS. The last profile looks at workstation activity, with a 20% write and 80% read mixture using 8K transfers. The 840 EVO started strong and was able to maintain its lead throughout. 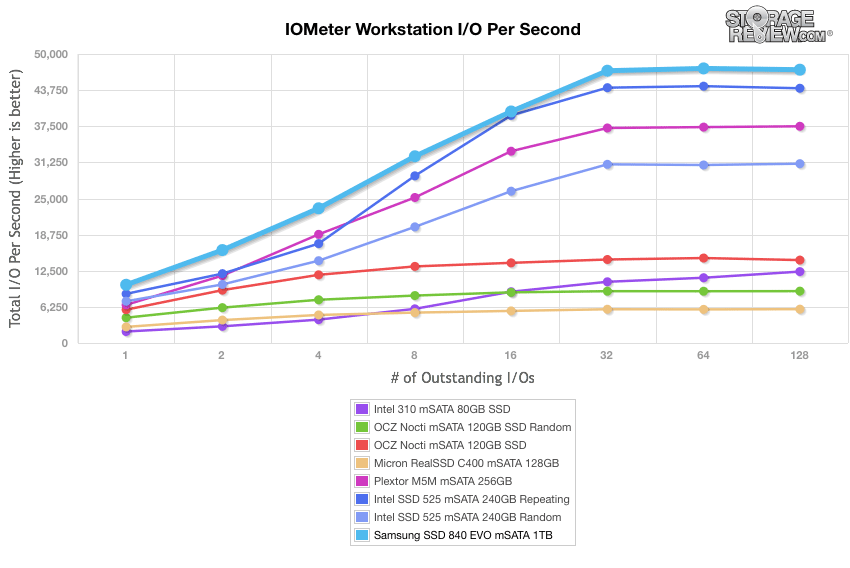 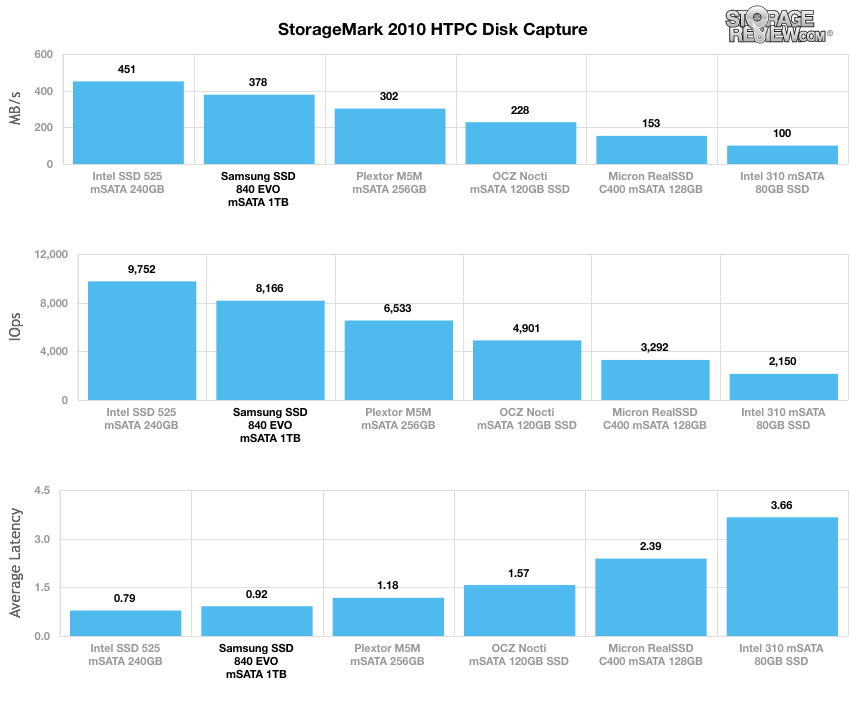 The 840 EVO came in second with each test being beat out only by the Intel 525. The 840 EVO again came out on top in throughput and latency, just beating the Intel 525.

In our tests, we measured great idle power consumption from the Samsung 840 EVO at 0.44W. During write activity it scored 3.69W. Its read and random read scores were 4.32W and 2.31W respectively. And it had a start up consumption of 2.01W.

The Samsung 840 EVO mSATA SSD is the first 1TB mSATA SSD to hit the market. It packs a powerful punch in performance and capacity for such a small form factor. Not only does it carry a lot of capacity through its unique design it also has strong security features to keep your data secure and leverages the Magician software package for drive management. For ultra-thin form factors, the EVO mSATA provides much-needed headroom for those needing larger in-system capacity options without giving up performance needs.

From a performance perspective, the Samsung 840 EVO is highlighted by its strong showing in our real-world workloads, ranking second in our HTPC trace. In Productivity and Gaming traces it came out on top of the pack in both instances showing excellent throughput and latency. Measuring single workloads, the 840 EVO was either the top or the second performer in 2MB sequential read speeds and remained that way in 4K random write speeds. Looking at mixed workload performance in our server profiles, the 840 EVO again out performed the other drives being tested. Overall, the Samsung 840 EVO proved itself to be a strong competitor in all of our consumer-focused workloads compared to other top-performing consumer SSDs along with much more capacity than the others.

The Samsung 840 EVO mSATA SSD 1TB delivers class-leading performance and capacity to those wanting the absolute best of both worlds for their ultraportable device.