﻿The OWC Express 4M2 is a Thunderbolt 3 external enclosure for up to four NVMe M.2 drives. Configurable in a variety of RAID options via OWC’s SoftRAID XT software (which is included as a $100 add-on), this external enclosure packs some serious performance in a small package. In this review, I’ll be looking at this device and how it fits into my workflow as a Digital Imaging Technician in the motion picture industry.

The OWC Express 4M2 is a Thunderbolt 3 external enclosure for up to four NVMe M.2 drives. Configurable in a variety of RAID options via OWC’s SoftRAID XT software (which is included as a $100 add-on), this external enclosure packs some serious performance in a small package. In this review, I’ll be looking at this device and how it fits into my workflow as a Digital Imaging Technician in the motion picture industry. 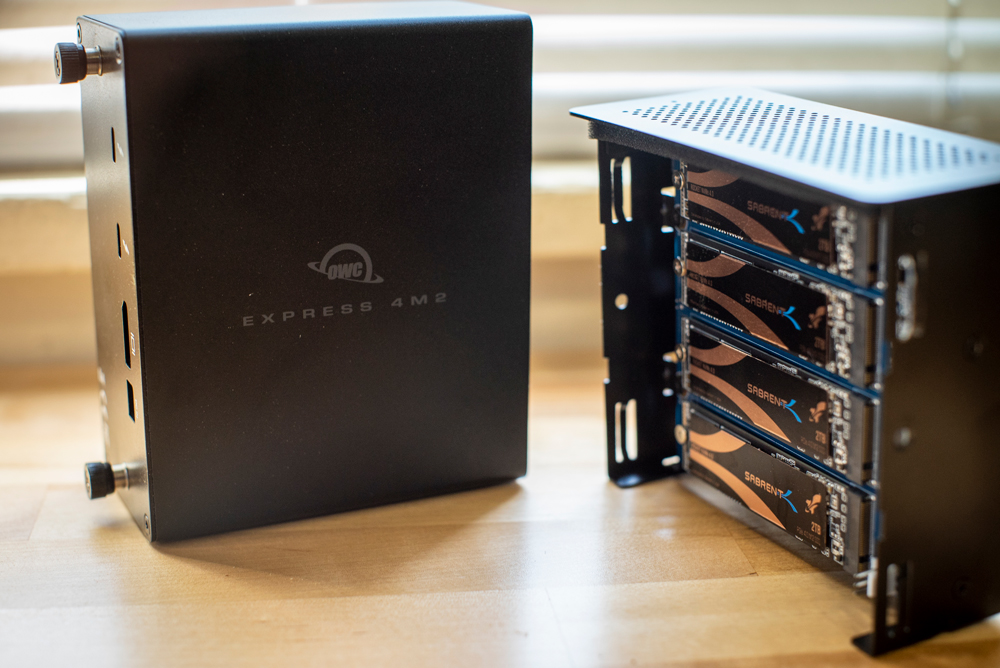 For this review, I have the Express 4M2 configured with four 2TB Sabrent Rocket NVMe 4.0 drives in RAID0. These drives are definitely overkill for this setup, as they’re PCIe Gen4 and can do up to 5GB/s read and 4.4GB/s write each, but they’re what I had on hand. Even in this PCIe Gen3 configuration and limited by Thunderbolt 3’s 40Gb/s interface, they’re still great options for their sustained performance and better-than-average write endurance of 3600TBW, with a claimed 1.7 million hours mean time between failures. The 5-year warranty is also a nice-to-have for something I use professionally. Oh, and they look pretty cool, too.

Let’s take a look at the specification sheet for the OWC Express 4M2, which doesn’t come with drives: 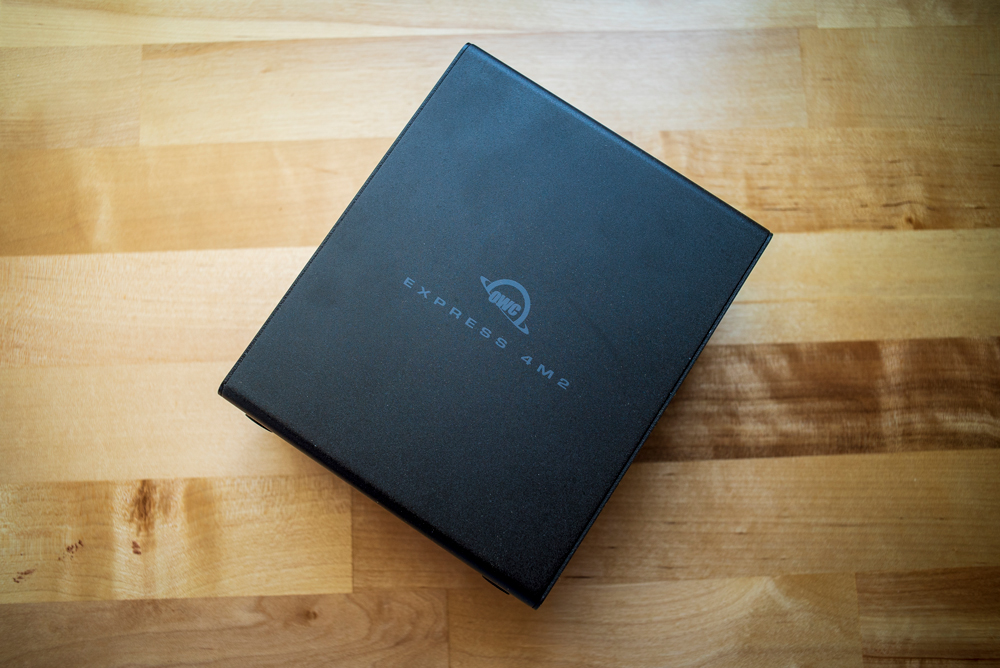 The OWC Express 4M2 is a really compact external enclosure, built out of extruded aluminum and anodized in black. Its longest dimension is just 5.4 inches and can easily fit on a rack shelf or backpack for easy transport. Its basic design is forgettable, but that’s sort of the point; it’s function over form without being offensive. The only source of light in this box is an internal LED that you can barely see, but lets you know it’s on and functioning. Also worth mentioning that OWC includes a certified ~2ft Thunderbolt 3 cable in the box, which is immensely appreciated.

To get into the device, there are two captive thumbscrews to slide the internal components out of the shell. While cool, it’s kind of a weird choice, since the only reason to open the device is to install or remove drives, which requires a screwdriver. The 60mm fan is configured as exhaust and the front intake grill has a non-removable filter to keep dust and debris out. The fan is definitely needed as under load, the drives get a bit toasty, but not alarmingly hot, and the fan remains quiet enough that you’ll only really notice it in the quietest of rooms. For my uses inside a rack case with a ton of other components that make some noise, it’s completely inaudible. It is worth mentioning, though, so if your workflow requires a really quiet room, be aware that you will hear the fan unless you bury it in a shelf somewhere. 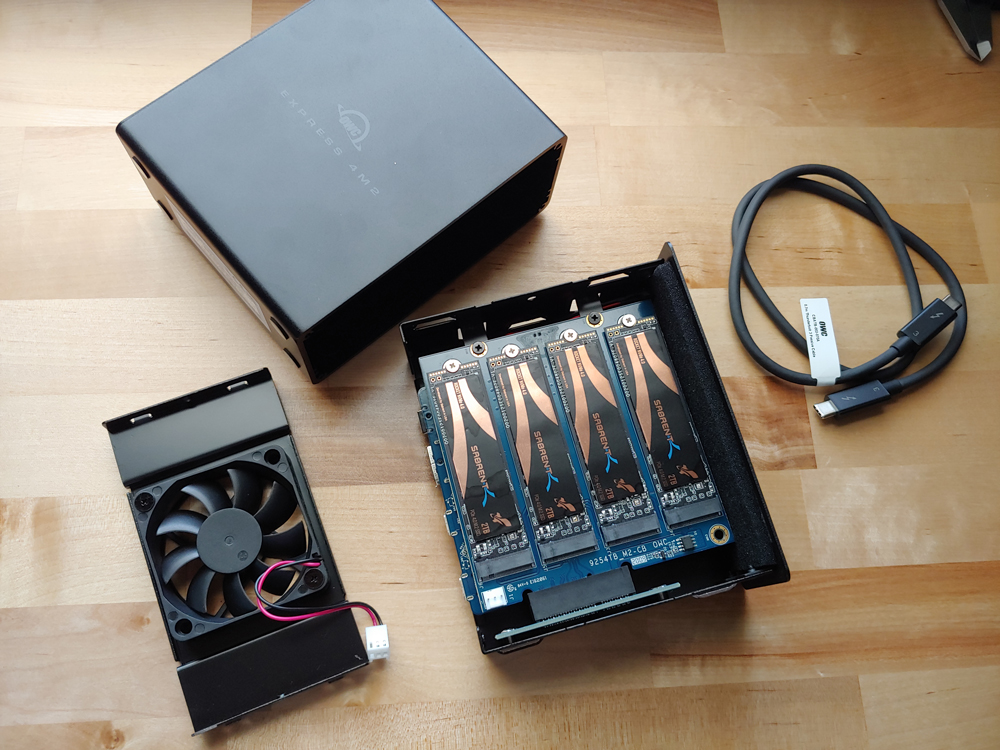 Ports-wise, the Express 4M2 is equipped with two Thunderbolt 3 ports, allowing you to daisy chain devices, as well as a DisplayPort port if you want to hook up an additional monitor. The only other port is the DC barrel plug, which takes 12 volts from an external power brick. I understand the constraints on space, but I think if OWC ever does a version 2, an internal power supply would be a nice option, though the external brick does provide flexibility if you run the rest of your equipment off 12V DC; there are considerations for both options.

The OWC Express 4M2 is truly a powerhouse and with a claimed rating of 2800MB/s from OWC, my expectations were pretty high coming in; they were kind of, sort of met. It’s by no stretch of the imagination slow, but performance is limited by Thunderbolt 3’s 40Gb/s interface and by the limitations of software RAID. These evaluations were done with four 2TB Sabrent Rocket NVMe 4.0 drives in RAID0 hooked up to a 2018 Mac mini. 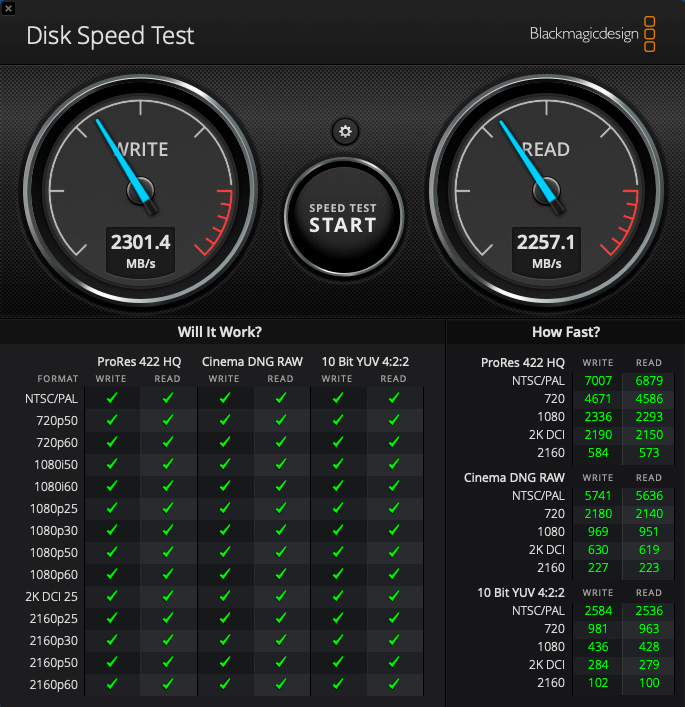 In Blackmagic Design’s Disk Speed test I saw about 2300MB/s write and 2260MB/s read. While this is well below the maximum theoretical performance, it’s by no means slow. Performance numbers will vary greatly depending on your configuration and drive choice, of course, but this gives you an idea of what to expect. For my workflow, sustained performance is important and this drive definitely delivers; it’s way faster than any memory card I’d be offloading footage from. Simultaneous read and write performance is also important, since I often offload and transcode footage at the same time, sometimes from multiple cards simultaneously, and this box doesn’t skip a beat.

In the screenshot of Pomfort Silverstack XT below, you can see that I’m offloading a card, verifying checksums of another card, and transcoding footage all at the same time with no impact on performance on any of the operations (note that the offload operation is limited to about 1GB/s because of the other drives, not the 4M2). 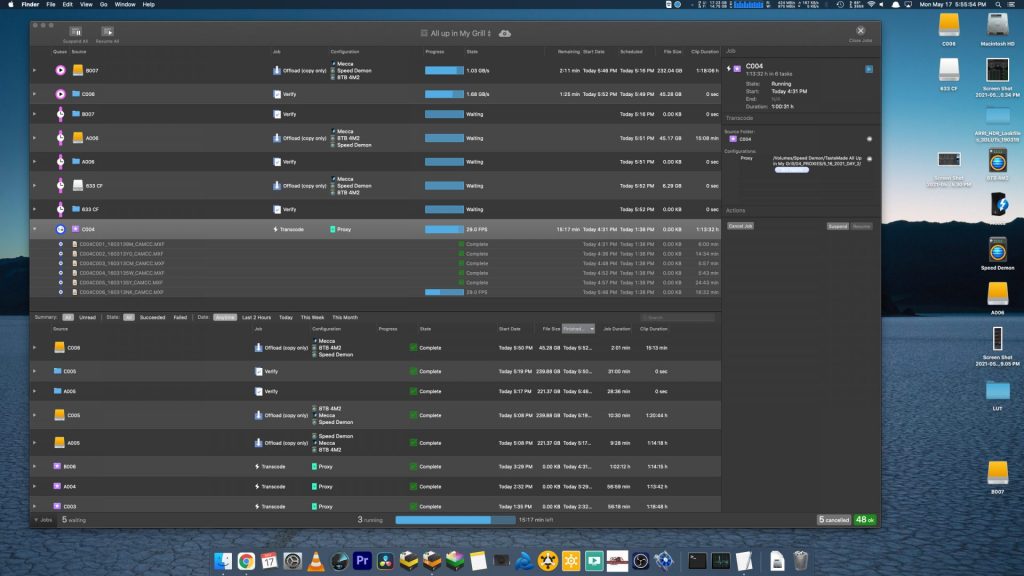 I wanted to touch briefly on the software RAID. While there are certainly arguments for both camps of hardware versus software RAID, OWC’s implementation in SoftRAID is pretty good, offering neat features like the ability to span a RAID across multiple discrete devices, e.g. two Express 4M2’s. It also acts as a volume manager once you’ve configured the device how you like. It offers parity validation and monitors RAID health to help prevent data loss and can lock volumes to prevent accidental deletion. Setup took less than 5 minutes the first time and the interface is overall very user-friendly but has a handful of power user options if you want them, such as setting the default allocation size. 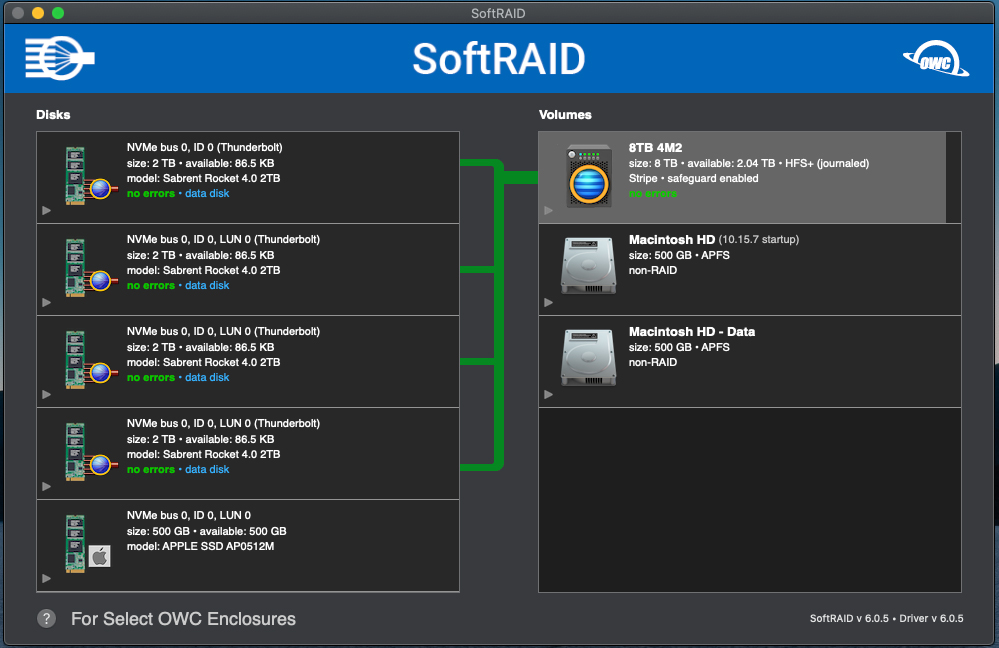 Of course, being software RAID, SoftRAID needs to be installed on whatever system you have the drive plugged into, but switching between computers is not a typical use case for a device like this. If you did want to swap between macOS and Windows, SoftRAID comes bundled with MacDrive, so your macOS formatted drives will work in Windows with no issues. This does, however, mean that the drive requires some setup when moving to new machines and it isn’t plug and play. You’ll also need to migrate the license that comes with the drive when you switch computers. It sounds obnoxious, but in practice, this type of device typically lives on one machine and isn’t something I find myself moving around often, if ever.

The OWC Express 4M2 has earned a prime position in my kit. Its performance is unrivaled in its size class, and at just $349 when bundled with SoftRAID XT, or $249 if you already own an OWC device and a SoftRAID license, the price is right. The Sabrent Rocket NVMe 4.0 drives are great drives, too, and I plan on continuing to use them. If you need recommendations for what you can put in the 4M2, hit us up on our social channels and we’ll be happy to help. In general, avoid QLC drives for this device to avoid slowdowns on sustained workloads, and avoid Gen4 drives since they’ll be overkill for a device running on Gen3 (do as I say, not as a do). The Samsung 970 Pro, though old now, is never a bad option. 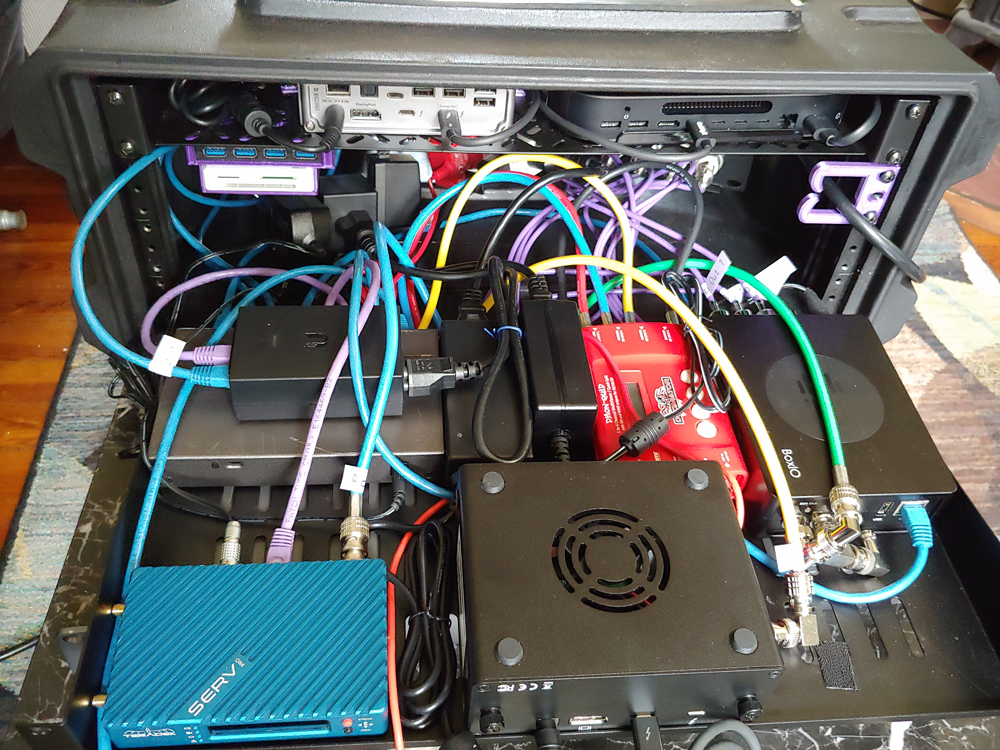 My only complaints with this device are minor ones. The fan could be quieter, and there’s room for the more ubiquitous 80mm fan size which would be quieter and provide even better cooling. The thumbscrews are kind of pointless and I wish the power brick were smaller. I’m grasping at straws here, in case it wasn’t obvious; there’s not much to complain about.

If you’re a creative professional and have a need for high-speed storage, I highly recommend the OWC Express 4M2. I especially recommend it if you need a storage device that can handle multiple operations at a time and physical space is not a luxury. Given that it’s just an enclosure, this device will outlive the drives it holds for a long time, and for the price, there’s no competition.