We’ve reviewed OWC’s perpetually growing line of Apple MacBook Air SSDs a few times, most recently the 240GB capacity of their Mercury Aura Pro Express 6G, which bested the SSDs Apple includes with the MacBook Air in every single benchmark we ran and in one case the OWC drubbed the Apple offerings by 10 times. Until recently 240GB was the top end capacity for the Mercury Aura Pro Express 6G, but in January OWC started producing a 480GB capacity, which we look at today.

We’ve reviewed OWC’s perpetually growing line of Apple MacBook Air SSDs a few times, most recently the 240GB capacity of their Mercury Aura Pro Express 6G, which bested the SSDs Apple includes with the MacBook Air in every single benchmark we ran and in one case the OWC drubbed the Apple offerings by 10 times. Until recently 240GB was the top end capacity for the Mercury Aura Pro Express 6G, but in January OWC started producing a 480GB capacity, which we look at today.

The 480GB Mercury Aura Pro Express 6G looks and acts nearly alike to the lower capacity models. It offers a SandForce SF-2281 controller with Toshiba Toggle NAND and a SATA 6 Gb/s interface, which is the big performance driver when compared to the stock 3 Gb/s SSDs. OWC quotes 511 MB/s read speeds and 448 MB/s writes.

OWC is shipping the 480GB drive now with a three year warranty and MSRP of $1129. 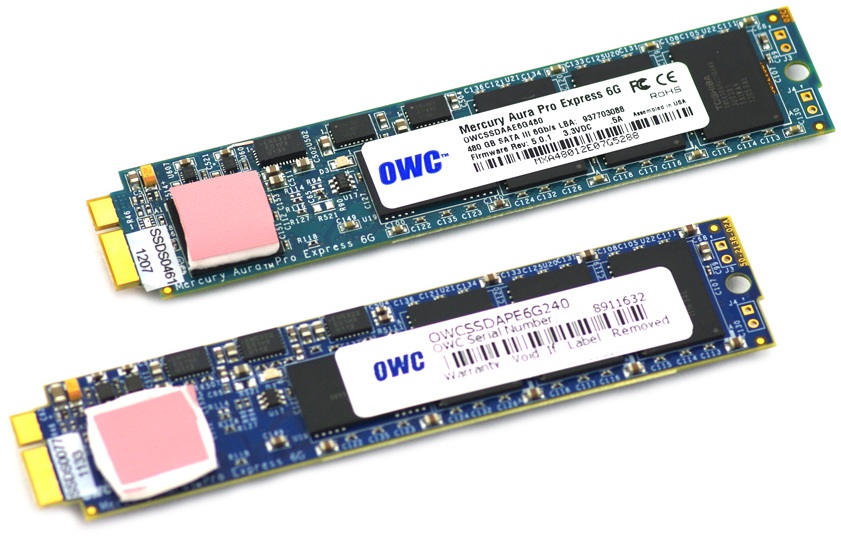 The Aura Pro Express 6G uses an identical stick of gum design to the Toshiba and Samsung SSDs Apple includes with the MacBook Air. The slim blue PCB bares all, from the SandForce SF-2281 processor with thermal pad affixed to the eight 64GB Toshiba TH58TEG9D2HBA89 NAND pieces.

The design of the Express 6G is very minimalistic, with only essential electronics soldered on with nearly no free space left on the PCB. The layout is similar to the previous generation model, with four NAND pieces on the top and four on the bottom. This compares to just four NAND pieces on the top of the stock 128GB Apple SSDs, with the bottom having a small thermal strip only.

A big change from how we benchmarked the original Aura Pro Express and the Aura Pro Express 6G is OWC’s creation of an adaptor card that takes the drive from Apple’s proprietary interface and converts it to a standard SATA connection. This means we’re able to run the Express 6G through our litany of tests and benchmarks in a “clean” manner, that is, without having to operate through Boot Camp or use benchmarks that have wild swings in result accuracy.

For this review, we put the OWC Mercury Aura Pro Express 6G head to head with 240GB 6G as well as the stock MacBook Air SSDs. These include a Toshiba-controlled 128GB model as well as a Samsung-controlled 128GB SSD, both which ship inside the newer notebooks, although you don’t get to pick a preference on which one you get. Below you will clearly see why this is such a big deal, as one is significantly faster than the other, with the new OWC Aura Pro Express 6G being faster still.

Being a product centered around an Apple MacBook Air, and in-system benchmark using Xbench seemed only fitting to include.

The first IOMeter test we look at shows the best-case scenario using a sequential 2MB transfer, which in the case of most SSDs is a test of how fast the interface is.

The new 480GB Mercury Aura Pro Express 6G came across with fairly impressive speeds. with compressible or repeating data it measured 509MB/s read and 470MB/s write, which dropped to 505MB/s read and 303MB/s write. In both cases speeds improved over the 240GB capacity.

In our next test we look at a 2MB random transfer test, which for most SSDs should offer similar results to the sequential test since there are no internal moving parts to slow down transfer.

The next area we look at is small 4K random transfers to see how well the SSDs perform with moving around tons of small files.

Compared to the 240GB Mercury Aura Pro Express 6G, the 480GB model offered excellent 4K read speeds, measuring 9,032 IOPS read at a queue depth of 1, compared to 6,216 IOPS from the smaller capacity. Write speeds dropped though, going from 20,372 IOPS at a queue depth of 1 to 8,236 IOPS. Similar drops were seen comparing incompressible performance as well.

The next test is an off-shoot of our 4K random write test, which looks at the average and peak latency recorded during the benchmark. Drives with higher 4K write speeds work out lower average times, with peak latency numbers noted for drives which may occasionally stutter or pause from hitting a block of bad NAND or other issues. The 480GB OWC Mercury Aura Express 6G SSD had higher response times than the 240GB model, measuring 0.121ms with repeating data and 0.201ms with randomized data. In terms of peak latency, the highest capacity model offered fantastic times, measuring between 15 and 16ms. 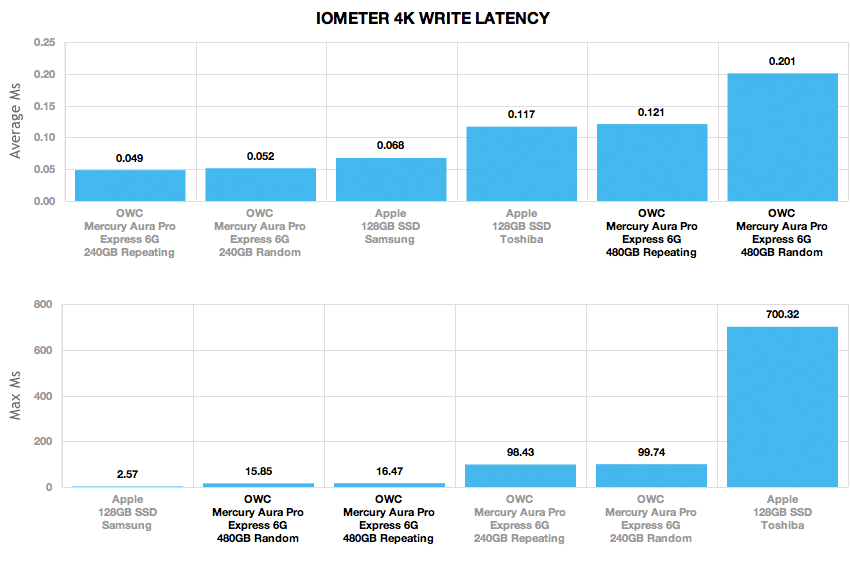 Using CrystalDiskMark to benchmark each drive with a random dataset, we measured transfer speeds very close to what we found using IOMeter. The final part of our Synthetic benchmark section covers our industry standard IOMeter server profiles; including Database, Webserver, Workstation, and Fileserver scenarios. All but the Webserver profile include a mixed read/write load, with the Webserver being read-only. In terms of what most users will notice or feel in their own system, scroll down to the Workstation graph and see just how much the OWC Mercury Aura Pro Express 6G dominates the stock Apple SSDs. In a best case scenario with fully repeating data, the OWC SSD performed 10.3x faster, dropping to “just” 6x faster in a worst case setting with incompressible data. It really is no contest comparing the OWC offering against the stock Apple MacBook Air SSDs. 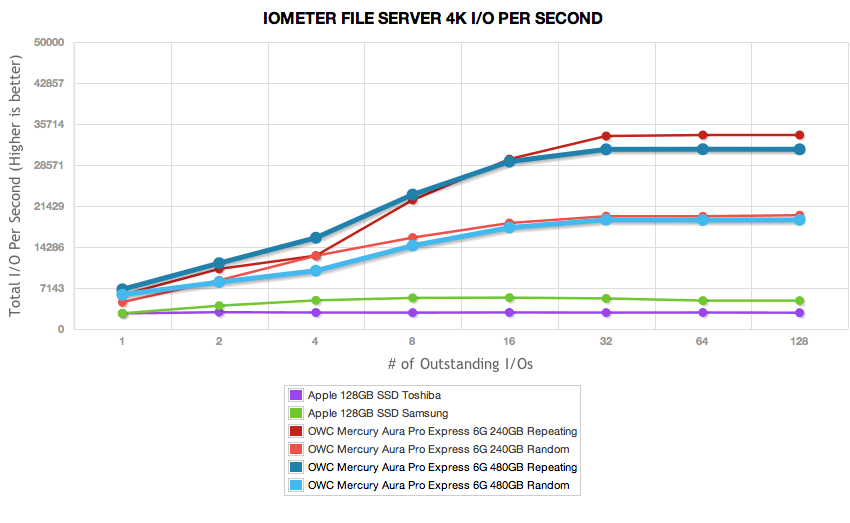 If you are new to StorageReview, one thing we try to focus on is how any given drive might perform under real-world conditions. For the average user, trying to translate high random 4K write speeds into an everyday situation is pretty difficult. It also doesn’t make sense to assume that a drive with very high sequential speeds is going to perform great in the real-world if it can’t cope with mixed random activity. To really see how drives perform under normal work-loads you need to record the exact traffic being passed to and from the device, and then use that to compare drives against one another. For this reason we turned to our StorageMark 2010 traces, which include HTPC, Productivity, and Gaming scenarios to help our readers find out how well a drive might perform under their conditions. Switching to a Productivity setting, the new 480GB Express 6G led the pack, measuring 338MB/s average compared to 327MB/s from the 240GB model. Like the 240GB capacity before it, the 480GB OWC Mercury Aura Pro Express 6G simply thrashes both stock SSDs Apple offers with the MacBook Air. The 480GB capacity does well in all of our real world benchmarks, coming in a tad behind the 240GB drive except in the productivity trace where the 480GB excels, which closely mirrors the way most MacBook Airs get used. The 480GB also shows strong 2MB read and write performance, both in sequential and random transfers.

If the SSD shows any weakness, it’s in the 4K area. While 4K reads are strong, the writes are where it falls behind its 240GB brother, and even the two stock Apple SSDs. Average 4K write latency is also the lesser of the bunch as a result, even though peak latency numbers were great. The 4K write weakness though doesn’t appear to hamper the real world performance though, as seen in the group-leading productivity benchmark. For nearly every SandForce-equipped SSD we have seen to date, 240GB seems to be the sweet spot in terms of performance, where lower or higher capacities seem to start dropping off with a bell-curve pattern.

Overall, even with one or two weak areas in performance, the OWC Mercury Aura Pro Express 6G still offers a massive bang for the buck in performance over the stock Apple Macbook Air SSDs. For users requiring more capacity than what’s offered by Apple, having the option of swapping in a 480GB version, compared to 256GB max stock, is a big deal.

For those who love their MacBook Air but want more performance and bigger capacity options than stock SSDs, thanks to OWC there’s a solution. The Mercury Aura Pro Express 6G with the new 480GB capacity offers the best of both worlds – delivering top real world benchmark scores with twice the maximum SSD capacity offered by Apple.