OWC has offered the OWC Mercury Elite Pro Qx2 for a while now, but over time they’ve managed to update the unit with compelling features and now, with support for up the 16TB of storage via four Hitachi Deskstar 5K4000 hard drives. The four-bay OWC Mercury Elite Pro Qx2 is highlighted by its all metal body, quad interface (eSATA, USB 2.0, FireWire 400/800) and on-board RAID that can be switched with the press of a button.

OWC has offered the OWC Mercury Elite Pro Qx2 for a while now, but over time they’ve managed to update the unit with compelling features and now, with support for up the 16TB of storage via four Hitachi Deskstar 5K4000 hard drives. The four-bay OWC Mercury Elite Pro Qx2 is highlighted by its all metal body, quad interface (eSATA, USB 2.0, FireWire 400/800) and on-board RAID that can be switched with the press of a button.

The quad interface and RAID options make the unit ideal for those looking for a combination of performance, data redundancy and big storage capacity out of a direct attached storage option. OWC offers the Mercury Elite Pro Qx2 in a variety of hard drive iterations, featuring either client or enterprise drives. The unit is also available diskless. Prices start at $280 diskless and range up from there depending on configuration. All Mercury Elite Pro Qx2 solutions come with a three year warranty. 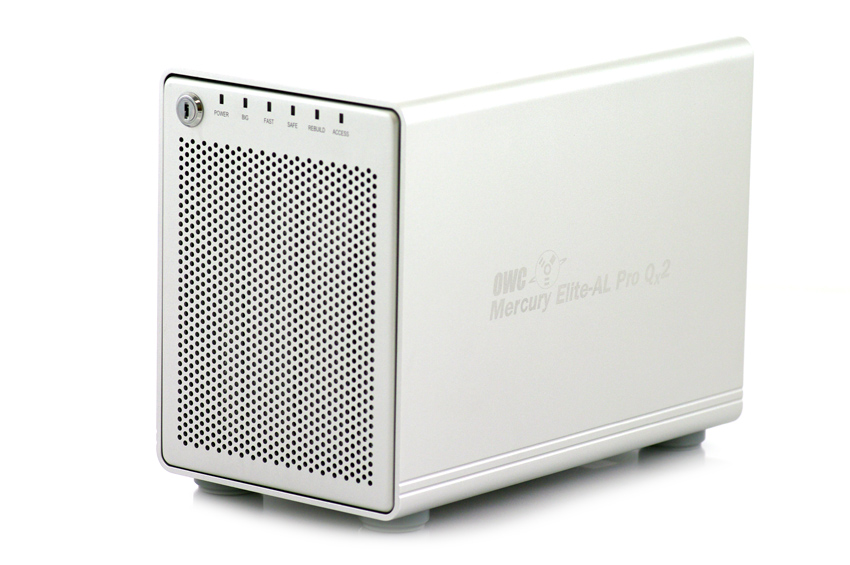 The OWC Mercury Elite Pro Qx2 has a solid and rugged feel, with a body comprised of metal alloy. The outer shell doesn’t flex under pressure and feels sturdy enough to handle being transported in a business environment. Professionals stationed at remote locations won’t have to worry about the case not holding up to other devices being stacked on it or items being dropped on it. As with many OWC products, the finish is bright silver with a clean and attractive matte finish.

The Mercury Elite Pro Qx2 has a quad interface, supporting USB 2.0, Firewire 400, Firewire 800, an eSATA. The fastest connections are FW800 and eSATA, with the latter topping out at around 250MB/s in the real world. Outside of picking the best connection for your application, the Mercury Elite Pro Qx2 is designed to just work out of the box. For users this means plug in data and power, flip the power switch and go. When running the system is fairly quiet, although some fan noise and drive noise can be heard if it is sitting nearby. 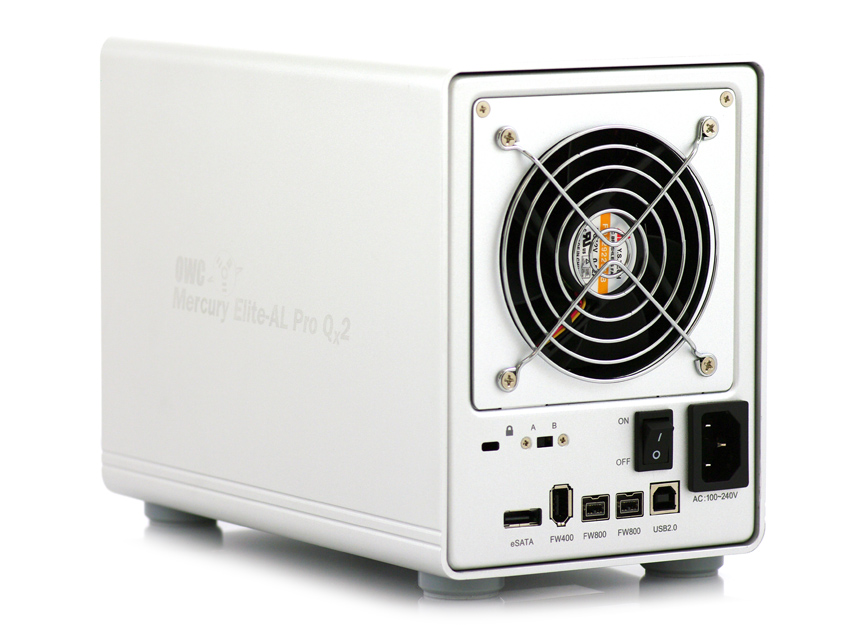 If you buy the Mercury Elite Pro Qx2 loaded with hard drives preinstalled, OWC includes four drives to support each capacity point. For example a 2TB model includes four 500GB drives while the 16TB model we are viewing includes four 4TB drives. Each model, except the 16TB version includes 7,200RPM drives, while the 16TB model uses 5400RPM. Since the 4TB Hitachi Deskstar 5K4000 hard drive is the only bare 4TB model on the market, it is no big surprise to see this limitation for now. For each 4-drive equipped model, OWC preconfigures each unit for RAID5 support, although Span, RAID0, RAID1, and RAID10 are also options.

Buyers can adjust the RAID setting and install or swap out hard drives be removing the front cover latched shut with a key lock. With the cover removed the four drive bays are exposed, as well as a screw adjustment for RAID modes. The system supports hot-swap capabilities, to allow users to replace a faulty drive without taking the system offline. 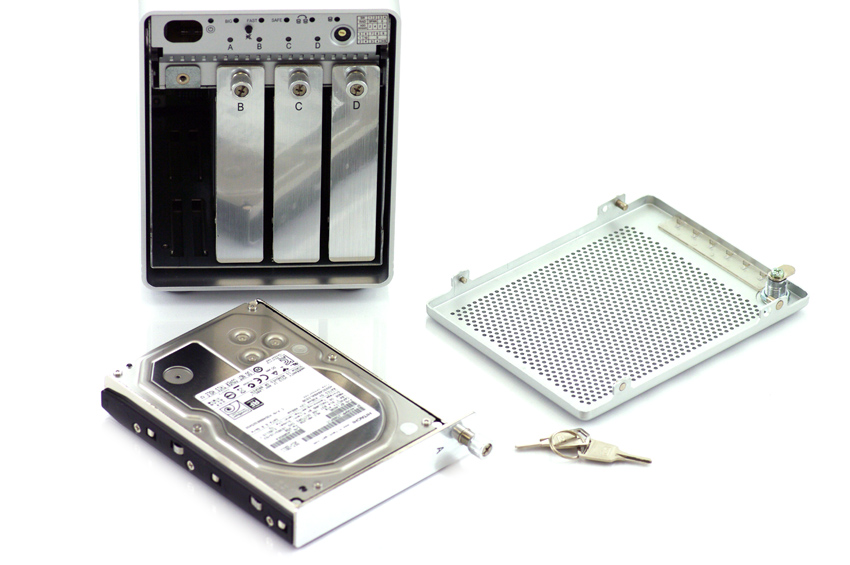 For most buyers interested in a external storage devices, the primary need is large amounts of storage that can be accessed quickly. Trying to fill up even 2TB of space, let alone 16TB, can be a time consuming process without a fast interface. To offer the perfect blend of compatibility and performance, OWC offers four interfaces on the Mercury Elite Pro Qx2, ranging from USB 2.0 and FireWire 400 on the slower side to FireWire 800 and eSATA 3Gb/s on the faster side.

The OWC Mercury Elite Pro Qx2 has always been a flexible direct attached storage system, which gets a big capacity upgrade with this latest model supporting 16TB via four Hitachi Deskstar 5K4000 hard drives. For professionals needing big capacity with redundancy options, the unit is quite capable. Offering a wide range of connection options with eSATA being the fastest, it is capable of being a high-capacity scratch disk for large projects, transporting vast amounts of data between locations, or just being a location to backup media from your notebook or desktop.

The OWC Mercury Elite Pro Qx2 offers a wide range of connectivity options, can be configured up to 16TB, and supports hardware RAID options covering performance with RAID0 to data integrity with RAID5. For professionals or home users looking for a large storage array that’s simple to use, the Mercury Elite Pro Qx2 is a solid option.