The OWC miniStack STX is Other World Computing’s latest iteration of their miniStack line, which has been pairing itself with the Mac mini since 2005. This latest version brings a 3.5-inch hard drive bay, a 2210 M.2 NVMe slot, and a Thunderbolt dock, which gives you three extra Thunderbolt 4 ports. These ports are where it gets its name; Storage and Thunderbolt eXpansion. This feature is especially welcome on the new 2020 M1-equipped Mac mini, which is only available with two Thunderbolt 4 ports.

The OWC miniStack STX is Other World Computing’s latest iteration of their miniStack line, which has been pairing itself with the Mac mini since 2005. This latest version brings a 3.5-inch hard drive bay, a 2210 M.2 NVMe slot, and a Thunderbolt dock, which gives you three extra Thunderbolt 4 ports. These ports are where it gets its name; Storage and Thunderbolt eXpansion. This feature is especially welcome on the new 2020 M1-equipped Mac mini, which is only available with two Thunderbolt 4 ports. 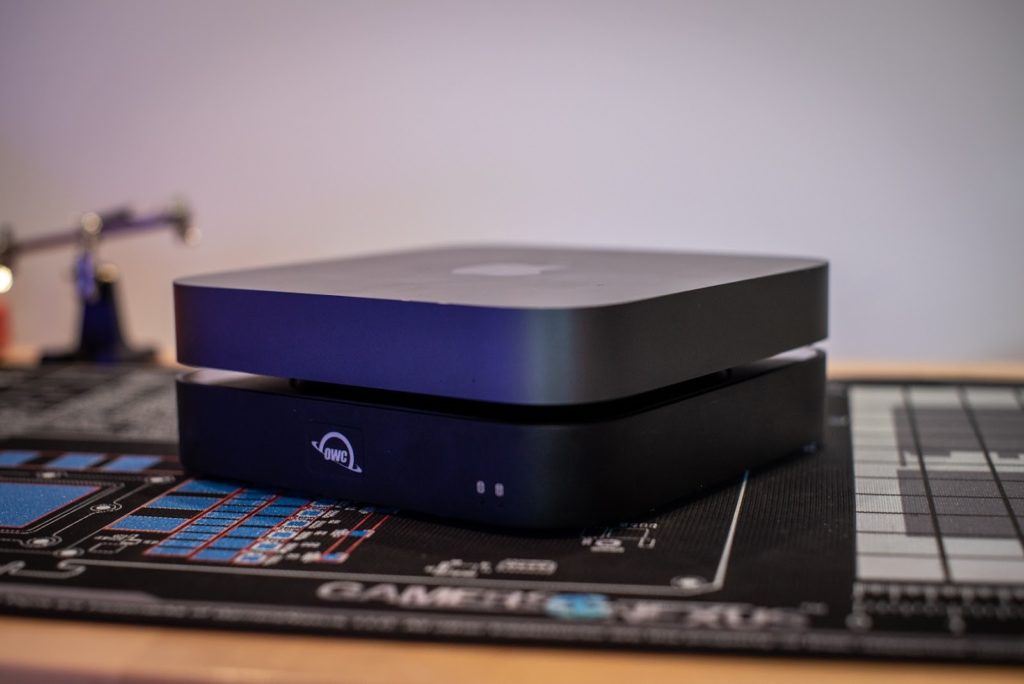 There’s not a lot to the device itself, but the world’s your oyster when it comes to how you can use this. I’ll take a look at some Creative Professional uses, as well general purpose uses such as a Plex media server, or a Time Machine backup target.

For this review, I’ll be pairing it with my former work system, a 2018 Mac mini, equipped an Intel i7-8700B, 32GB of RAM, and 10GbE. One of the Thunderbolt controllers on this machine is fried, so while certainly not a scenario applicable to everyone, the Thunderbolt expansion has been a great way to get some functionality back and give the machine a more comfortable life in retirement. 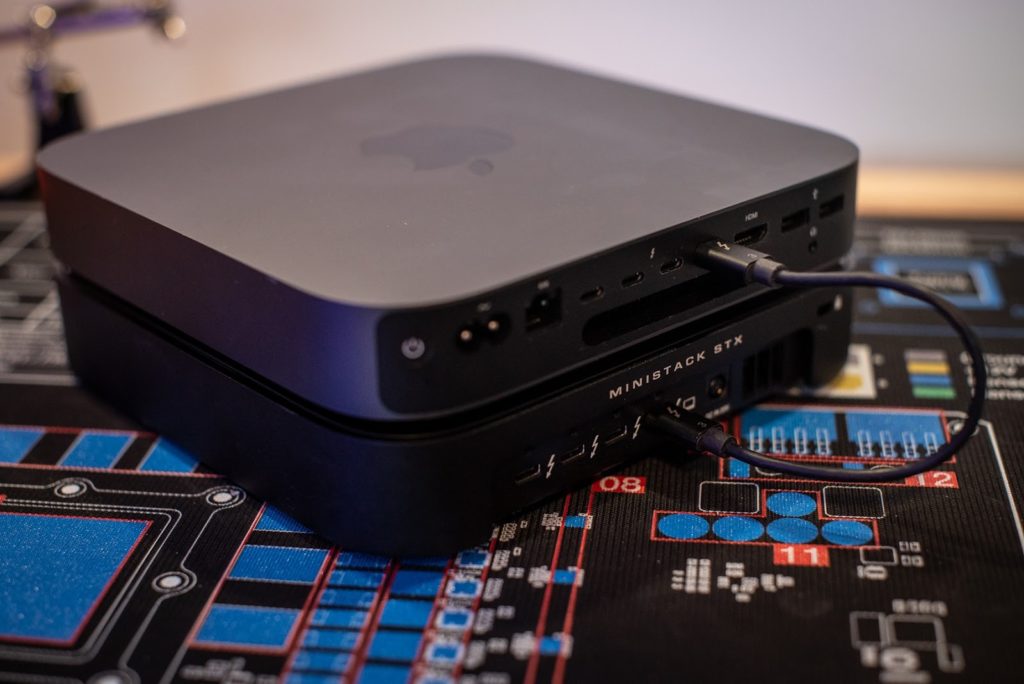 The OWC miniStack STX is sold bare starting at $299. OWC will also configure the STX with HDD and flash if you like.

The next thing is just the versatility of this device that becomes apparent looking at the OS compatibility. It is, of course, designed primarily to coexist with a Mac mini, but at the end of the day, it’s just a Thunderbolt 4 dock with storage built-in. You can use it with anything with a USB-C port or it can be a desktop dock for a laptop, which would be able to utilize its 60W of power delivery. I also would like to commend OWC for including a Thunderbolt 4 cable with this device; it seems minor, but that type of attention to detail is what makes OWC’s products stand out and this is no exception.

As mentioned above, the miniStack STX is nearly the exact same dimensions as a Mac mini. It’s not quite the same shape, but in general, it’ll fit where you need it. As opposed to OWC’s previous miniStack which was all silver, the STX features textured matte black on all sides, and a gloss black top (visit our socials to see a very satisfying plastic peel). It’s a good-looking device and won’t feel out of place on a desktop underneath a Space Gray Mac mini. 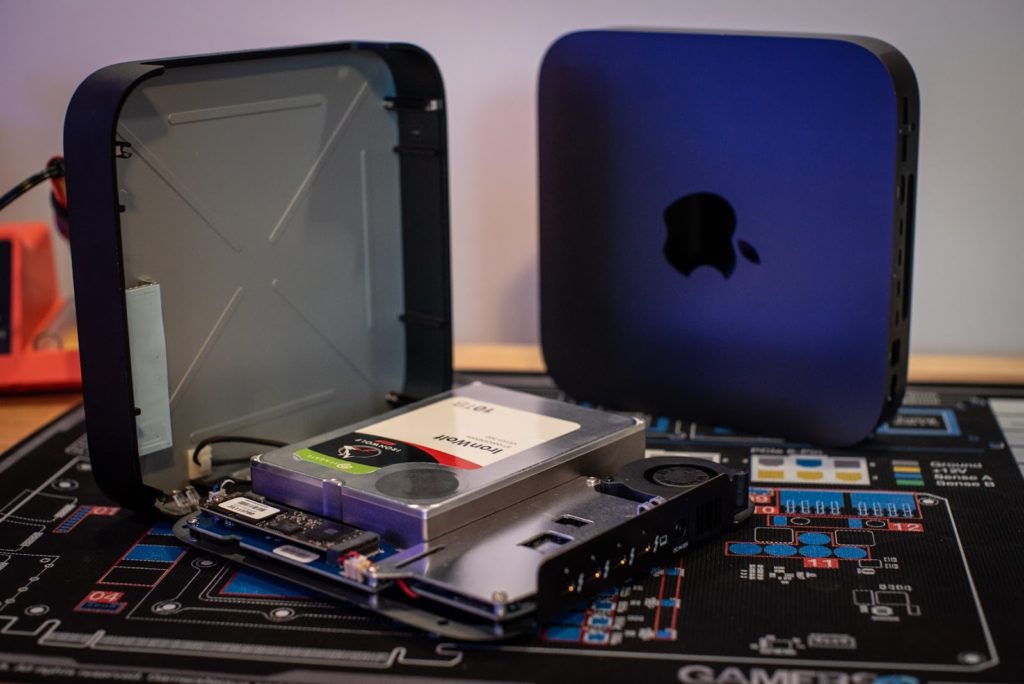 As far as getting access to the insides, OWC has done a great job making accessibility easy, with just four Phillips screws to remove the top, where the 3.5-inch SATA tray and the M.2 NVMe slot are easily accessible for future upgrades, or for installing your own drives if you bought just an enclosure. Additionally, the fan is easily accessible without doing any serious dissection so it can be replaced if it ever fails.

For those who aren’t a fan of the LED on the front, unplugging it is trivial once inside. It’s also worth noting the top is made of steel and acts as a heatsink for the NVMe drive, with a thermal pad located on the top to help keep your storage cool.

The miniStack STX won’t blow your socks off with speed, but it’s got it where it counts and it’s no slouch. The hard drive speeds will vary greatly depending on the model and capacity you go with, but there is no scenario in which the miniStack will be the bottleneck for a mechanical drive or SATA SSD.

On the 10TB IronWolf NAS drive I installed, I observed the full throughput of 246MB/s read and 206MB/s write doing 4GiB of sequential data at a queue depth of 8. The NVMe drive that came preloaded in this 2TB review unit is OWC’s Aura Pro IV and I saw 845MB/s read and 724MB/s write in the same 4GiB sequential test, coming right in line with OWC’s own claim of 770MB/s of “real world” performance.

You may be thinking that this seems like low numbers for a device equipped with a bunch of 40Gbps Thunderbolt 4 ports, but I see this is a good thing. It leaves plenty of bandwidth for whatever other peripherals you may hook up. 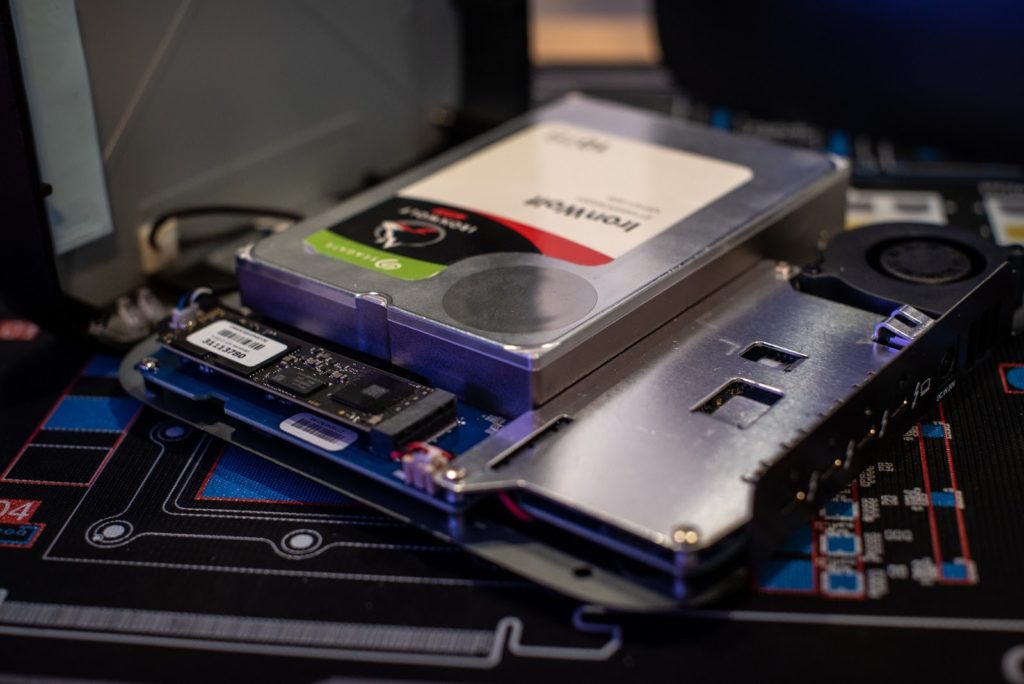 As far as expandability goes, you can buy this as just an enclosure for $299 MSRP and load it up with as much or as little storage as you’d like. You could also leave it empty and use it as a Mac mini-shaped Thunderbolt hub, though if that’s your intention I recommend going with OWC’s Thunderbolt Hub, which is ostensibly this device without the storage.

You could load this up with an 8TB NVMe M.2 SSD and a 20TB hard drive for 28TB of raw storage. Did I mention all of that would be in something the same size as a Mac mini? The storage density and versatility of the miniStack STX is where it really shines.

There are several different use cases for the miniStack STX in creative applications. The extra Thunderbolt ports are great for hooking up additional peripherals, whether that be video or audio capture devices, like the Blackmagic Design UltraStudio series or the Universal Audio Apollo series. The extra ports are especially nice when connecting “dead-end” Thunderbolt devices that don’t have passthrough. You could also attach an external PCIe chassis and at that point, the world’s your oyster for expansion cards. 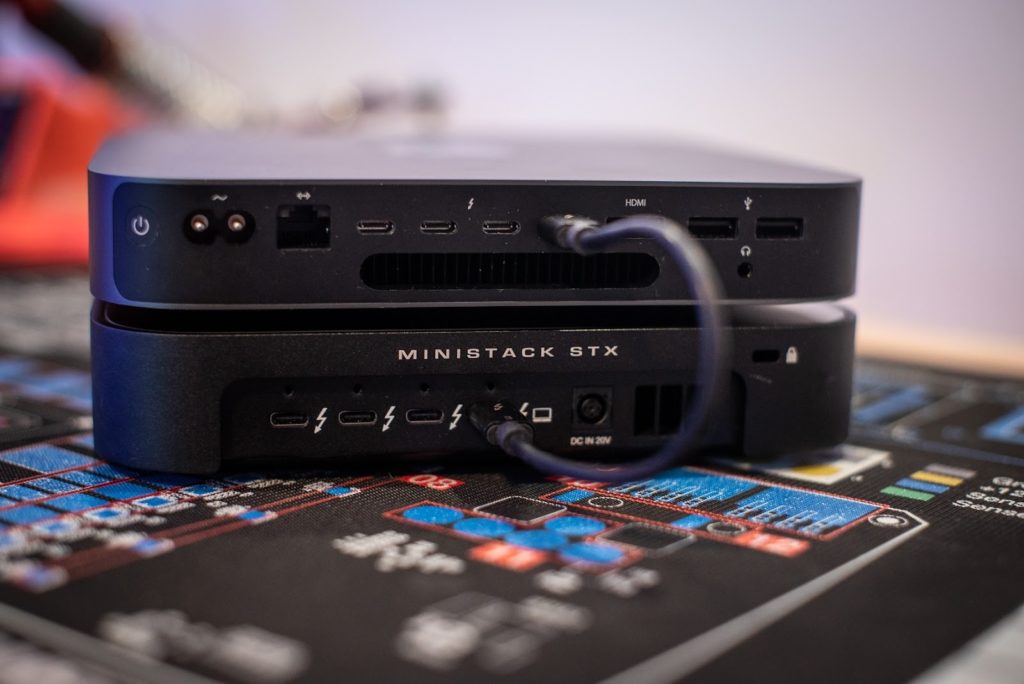 The miniStack having storage built-in also frees up some ports as it eliminates the need for additional external storage (though you should always have a backup, and you could always add even more storage). With up to 20TB of hard drive capacity for bulk storage of media and assets, and up to 8TB of NVMe flash to work as a cache, or a place to keep what you’re working on right now, the miniStack should fill whatever your creative needs require.

If you’re not a creative professional (or you are and have an older Mac mini you want to put to good use like me), there are plenty of other great use cases for this device. One of my personal favorite uses of this has been setting it up as a Plex server.

I use the 10TB hard drive I installed to store all the movies, television shows, music, and podcasts I could want. I use the 2TB NVMe drive as the transcode watch folder to transcode and ingest new content without interrupting playback on files I can stream directly from the hard drive. Setting up Plex took just minutes and adding the miniStack STX’s volumes during the setup was a breeze. OWC themselves even wrote a guide on how to set up the miniStack for Plex. 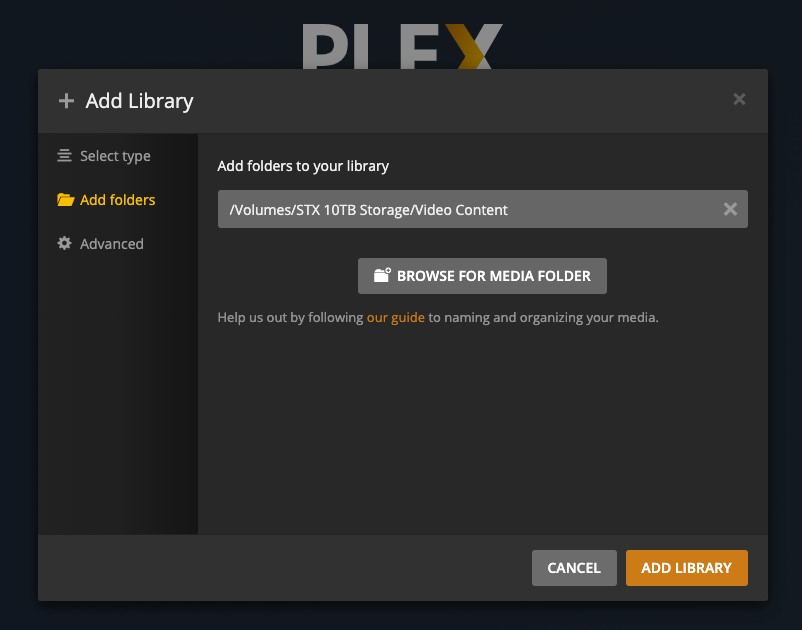 Another option is using macOS’s built-in media sharing service, which allows you to share the Mac mini’s iTunes library over your network to other devices, including an Apple TV. This is a good alternative to Plex if you’ve purchased or rented content, whether it be movies or music, through iTunes. It’s a little more limited than Plex, with the content being limited to your local network only, but still a good option for those who already have a substantial iTunes library or use an Apple TV as their television’s smart device. 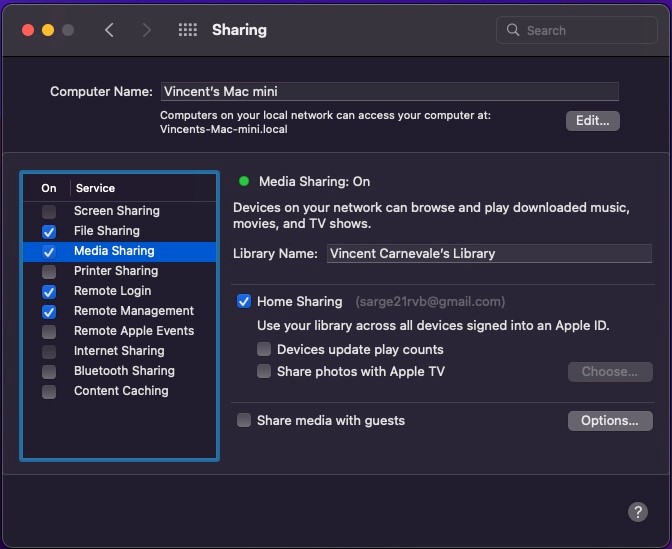 The possibilities are endless, but the last one I’ll talk about here is using a Mac mini and the miniStack STX as a Time Machine backup target. You can view Apple’s own guide on how to set this up. It’s very easy and straightforward, and also lets you just do general file sharing if you want to use it as a file server. If your Mac mini doesn’t have 10GbE built-in, the miniStack STX’s additional Thunderbolt ports can be used to hook up a 10GbE adapter and have high-speed network storage in a neat package. 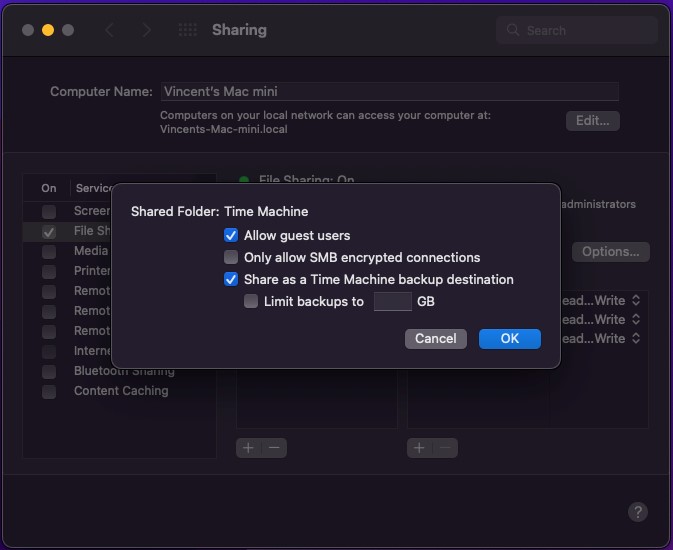 Speaking of packaging, because the OWC miniStack STX is more or less the exact same size as a Mac mini, it’ll fit anywhere a Mac mini does. For my setup, I purchased a Sonnet RackMac mini 1U chassis which let me mount my 10GbE-equipped Mac mini and miniStack STX side-by-side. This set-up ostensibly gives me a high-speed, energy-efficient, and quiet file server, Plex server, media server, and Time Machine server, all in just 1U of rack space.

In any of the above configurations, I recommend enabling remote management and remote login under the same “Sharing” system preference window. It’s an easy thing to do and lets you run the Mac mini in a pseudo “headless” mode, where you can get access without the need to plug in any peripherals. 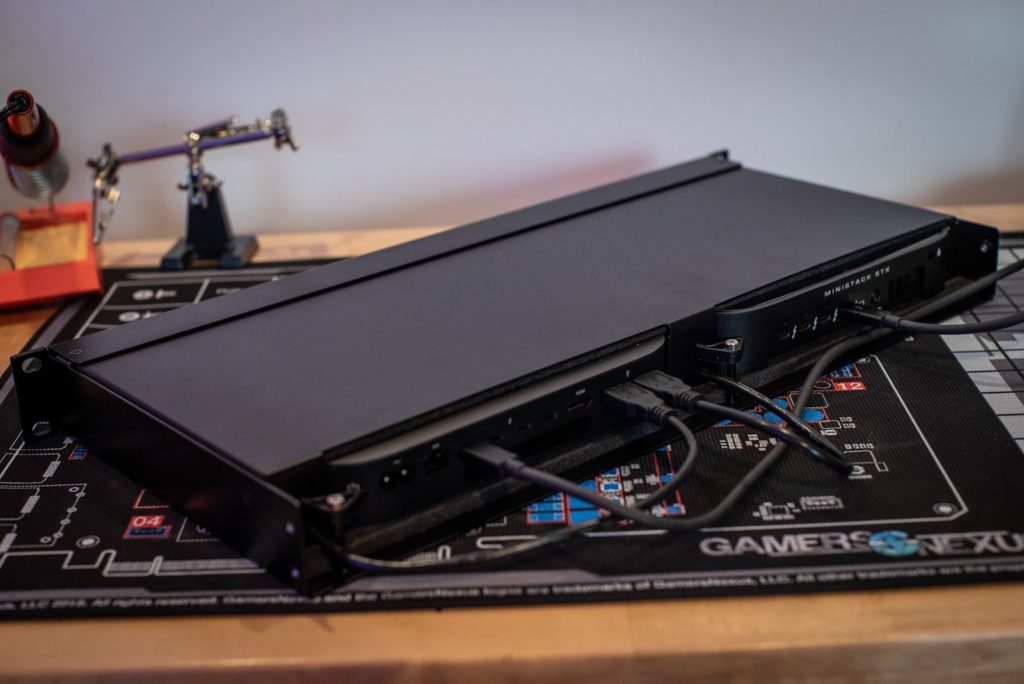 If you feel like the “TX” of the STX is superfluous in this configuration, you could go crazy with it and add something like the Sonnet Echo III Rackmount to your rack for all the PCIe expansion you can think of. You could add a 10GbE network adapter (or multiple, for fun), or create a huge storage pool with a Thunderbolt 3 JBOD. Or you could do all of the above!

There are so many more things that could be done with the OWC miniStack STX that I wasn’t able to explore in this review, but that’s the beauty of a device like this; it’s a blank slate to add life back to an old machine or to enable new possibilities on a new one. As with most of OWC’s other products, it’s designed well and comes with everything you need in the box. By its nature, it can be expanded and upgraded for years to come and configured for, however, your use cases change. 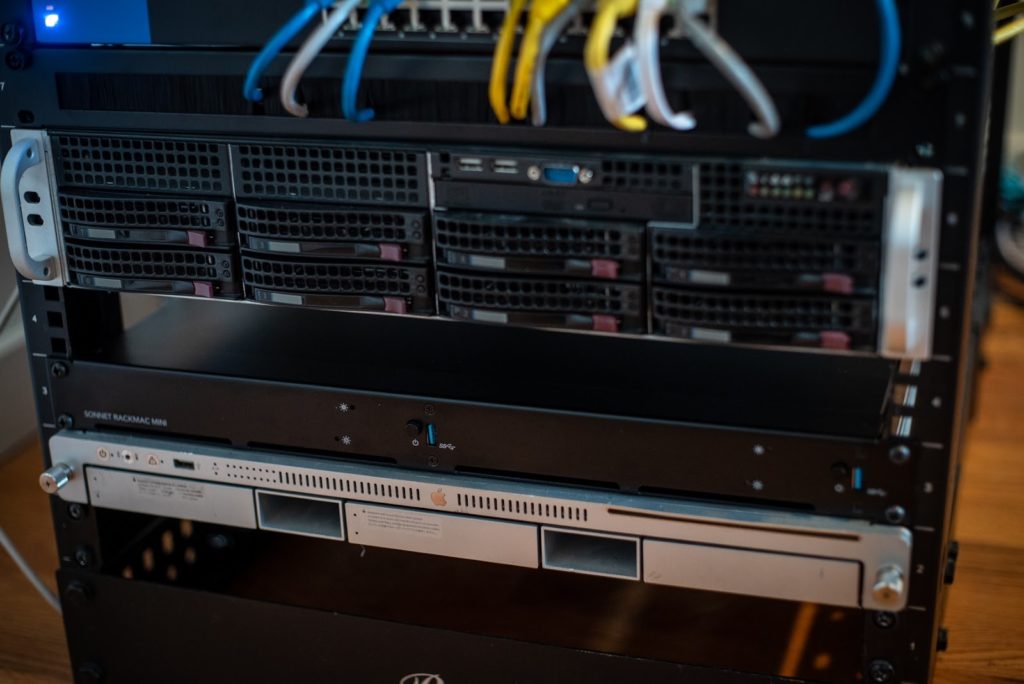 Whether you’re a creative professional who needs more Thunderbolt ports out of their Mac mini to connect peripherals, or a cinephile with a massive film library primed for a Plex server, or just someone with an old Mac mini they want to do something with, the OWC miniStack STX provides the versatility for all those needs. At $299 for an empty enclosure, it’s not a terribly expensive way to do what you want, especially if you already have unused storage lying around. It checks a lot of boxes for a lot of uses, and I look forward to seeing what else I can come up with.

Marvell Doubles Down On FC-NVMe