SandForce solid state drives seem to be the hotness in the market right now, and why wouldn’t they be? The SandForce controllers are popular pieces of technology for a reason: their design allows for dispensing with drive cache, and they perform awfully fast. It’s no surprise many manufacturers have produced drives based on SandForce hardware, and today we have the 120GB Patriot Inferno SSD (PI120GS25SSDR) on the bench.

SandForce solid state drives seem to be the hotness in the market right now, and why wouldn’t they be? The SandForce controllers are popular pieces of technology for a reason: their design allows for dispensing with drive cache, and they perform awfully fast. It’s no surprise many manufacturers have produced drives based on SandForce hardware, and today we have the 120GB Patriot Inferno SSD (PI120GS25SSDR) on the bench.

The Patriot Inferno SSD ships in capacities of 60GB (PI60GS25SSDR), 120GB, and 240GB (PI240GS25SSDR). Specifications list the SandForce controller as the SF-1222; people used to seeing SandForce controllers noted simply as “SF-1200” might be excused for thinking this is new silicon, but it’s basically the same controller being used in all consumer-grade SandForce-based drives.

Since there’s such a healthy number of SF-1200-based drives on the market, we’ll be looking both at Patriot’s implementation of the controller along with what the Inferno brings to the table against the competition. 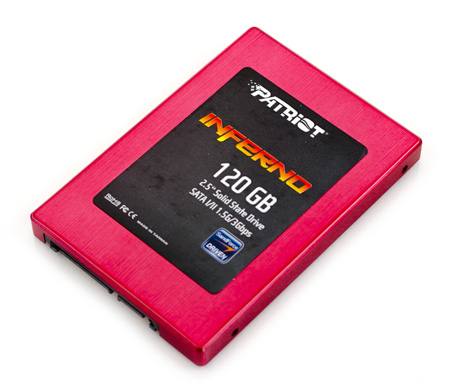 Mostly appropriate to its “Inferno” nomenclature, the Patriot Inferno SSD ships in a wine-colored shroud with a basic black label on the top noting the model and capacity. The bottom of the drive is a basic silver plate held in place with Philips-head screws covered by warranty stickers to deter disassembly. The unit is solid, aided by the all-metal casing. 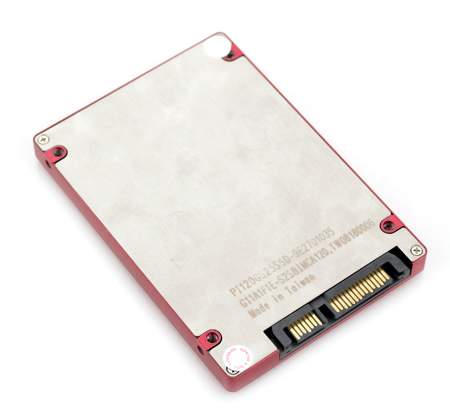 As with all SSDs we disassembled the unit to get a better look. The inside of the Patriot Inferno is about what one would expect for a SandForce-based SSD, with the SF-1222 controller sitting in the center of eight 8GB flash modules; astute viewers will note the Patriot Inferno uses the same flash the recently reviewed OWC Mercury Extreme Pro SSD does. In fact, the board layout is extremely similar to the OWC’s.

The flipside of the single PCB has the other eight 8GB modules. These are Intel 29F65G08CAMDB modules; as mentioned before, these are consistent with the rest of the SandForce SSDs we’ve reviewed. 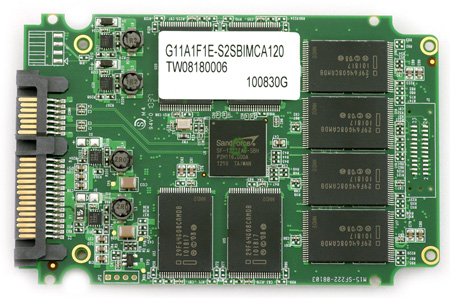 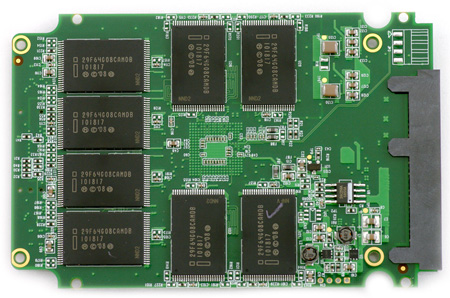 We start out with synthetic benchmarks, employing IOMeter and CrystalDiskMark to get a general feel for drive performance. When testing SSDs, we use the standard 512-byte test alongside a 4K test.

Our first test is IOMeter’s 2MB sequential transfer test; this test is helpful in seeing how well the drives can hit their advertised transfer speeds, and can prove that not all SF-1200 implementations are equal. 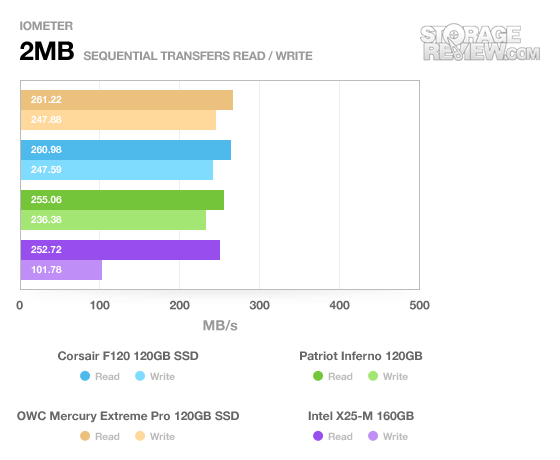 Out of the gate, the Inferno’s speeds are acceptable, but they lag behind the other implementations, especially in write speed. The differences aren’t huge, but the Inferno still sits at the back of the pack. It’s only when faced with Intel’s traditionally middling write speed or the Marvell-controller-based Crucial RealSSD that it can eke out a win. 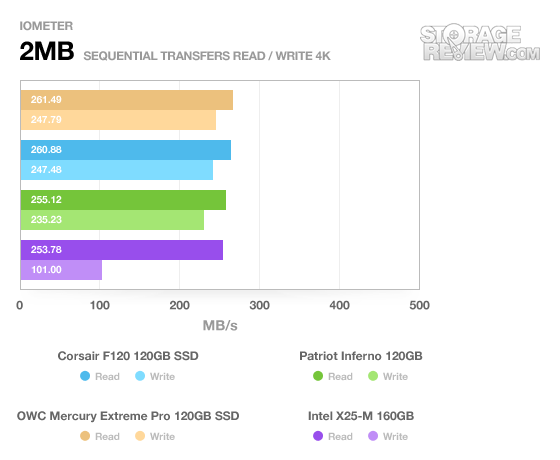 The 4K load tells the same story. The Inferno is fast, but it’s not as fast as the other SandForce-based drives. 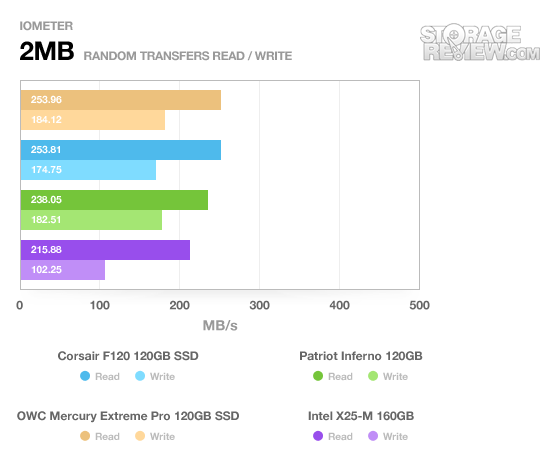 Moving to a random read/write doesn’t seem to help the Inferno too much. It’s still able to pull a solid win on the Intel X25-M, but its read speed is a chunk below the other drives. Random write speed fares better, but not enough to unseat the OWC Mercury Extreme Pro. 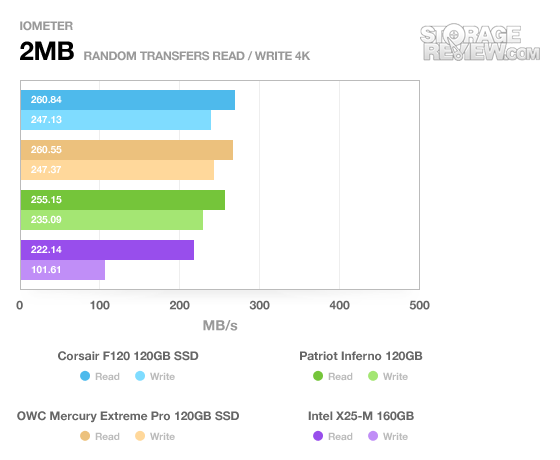 And just like that, the 4K load brings the Inferno back in line behind the other SandForce drives. 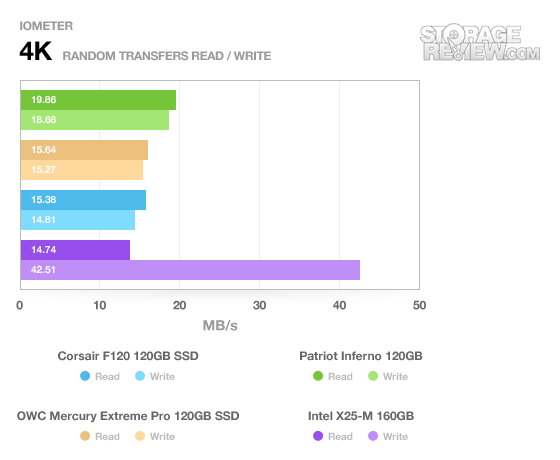 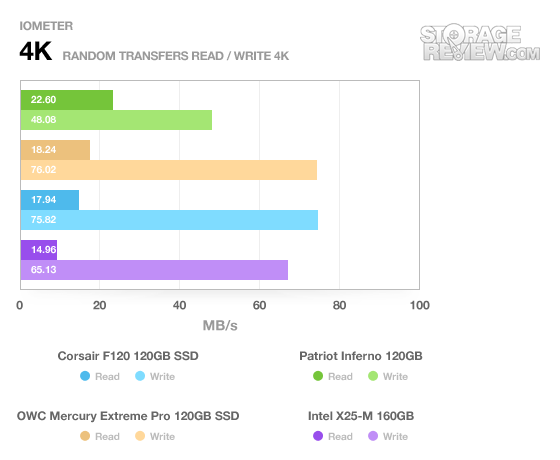 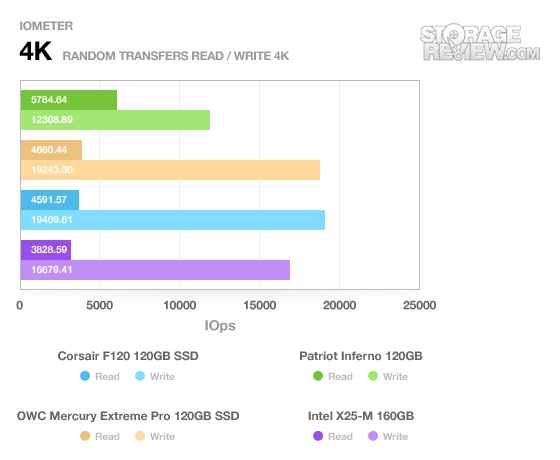 The 4K-alignment still favors the Inferno on read speed, but writes go through the floor, with the Inferno dead last by a long shot. 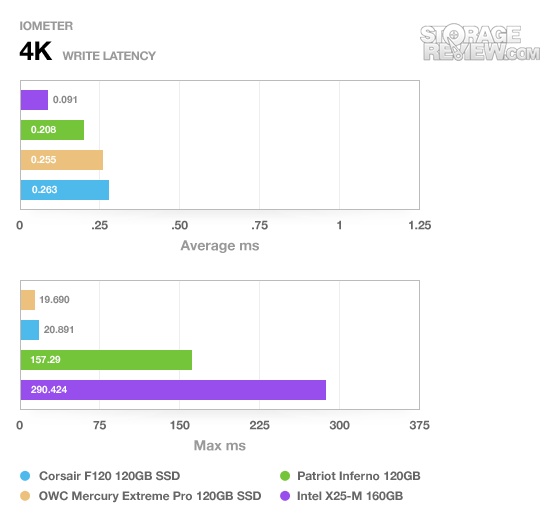 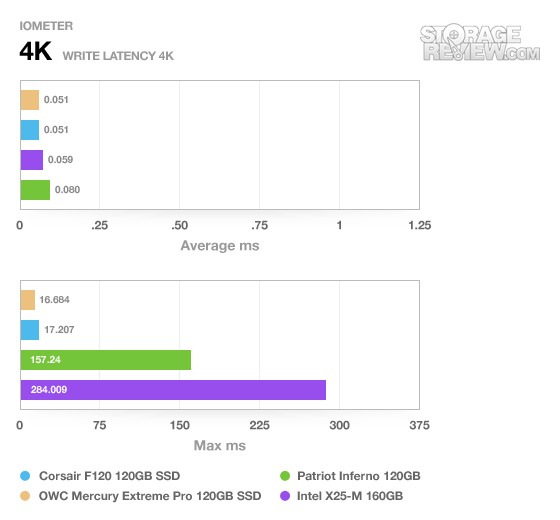 Drive latency on the Inferno is excellent for reads, but in both 512-byte and 4K-alignments the write performance is dismal compared to the other SandForce drives. 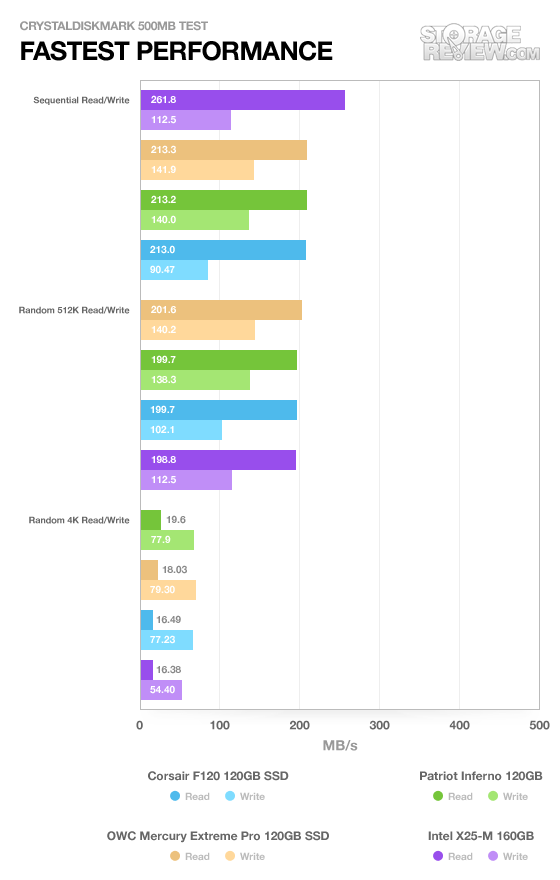 The “Fastest Performance Test” in CrystalDiskMark is much kinder to the Inferno, with it placing consistently at the top of the heap against its competition; Intel’s venerable X25-M is only able to earn a win in sequential read speed.

Next, we’ll take a look at how well the Patriot Inferno copes with simulated workloads in IOMeter. 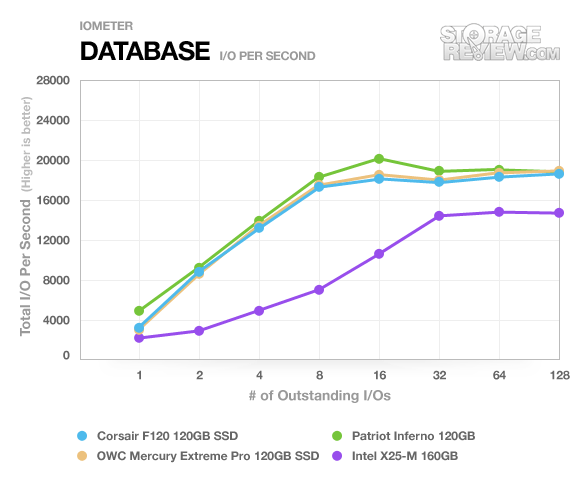 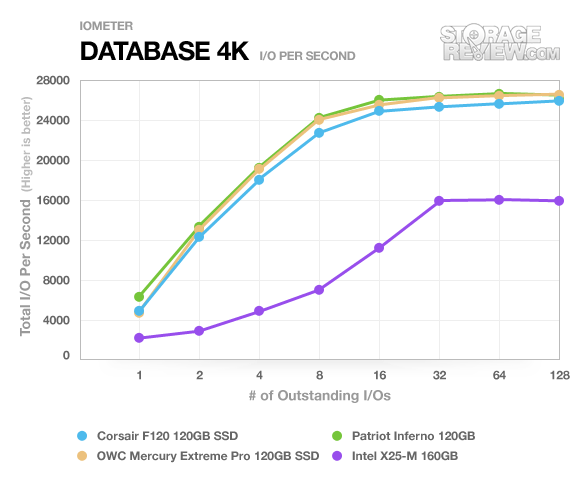 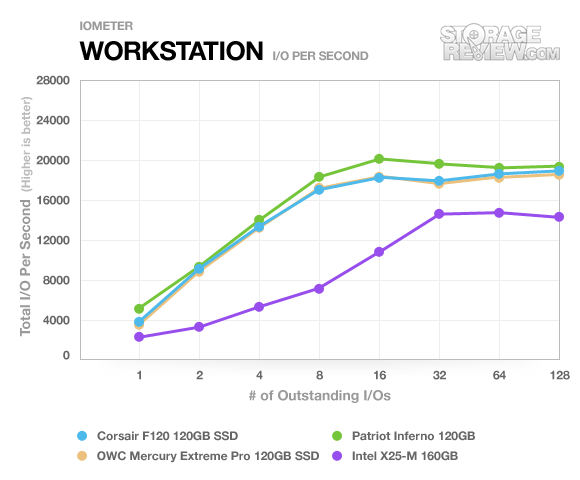 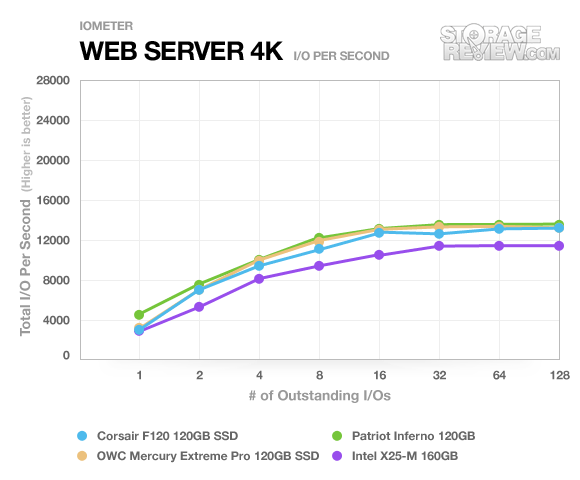 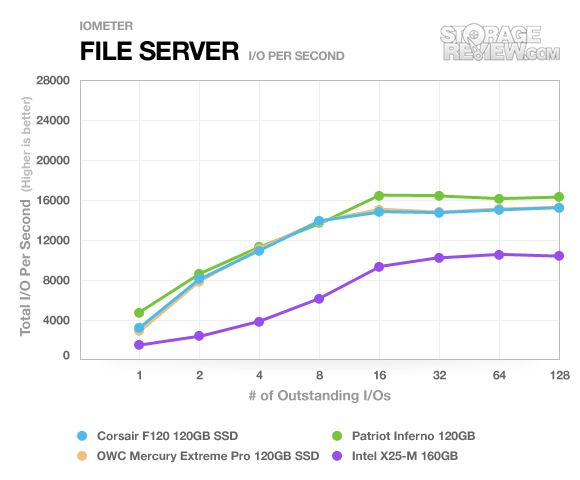 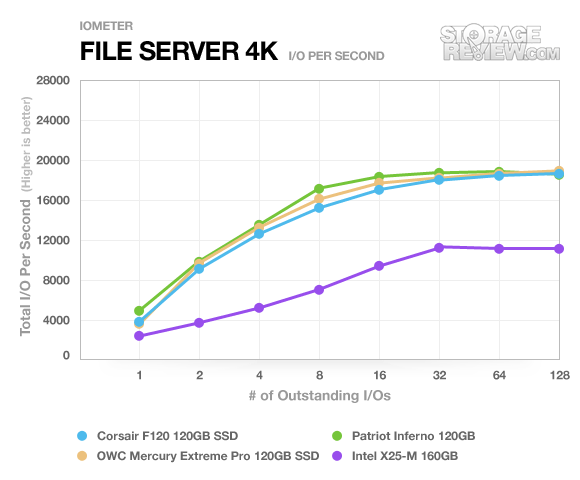 In most cases, the Patriot Inferno maintains a moderate lead over the competition, though it does seem to tail off at around 16-32 outstanding I/O’s instead of showing a steady climb. Still, even with this drop the Inferno performs admirably.

Now that we’ve gone through the synthetic tests, we have some sense of how the Patriot Inferno performs compared to other SandForce-based drives as well as Intel’s venerable X25-M. Transfer speeds are a bit lower in general, but the Inferno seems to excel under server loads. Synthetics don’t tell the whole tale, though: for that, we need to trace the drive’s performance under more realistic workloads.

We use custom StorageMark 2010 traces to get a feel for how the drive will function in day-to-day operation. Our first is the “HTPC” test, which includes playing one 720p HD movie in Media Player Classic, playing one 480p SD movie in VLC, downloading three movies simultaneously through iTunes, and recording one 1080i HDTV stream through Windows Media Center over a fifteen minute period. 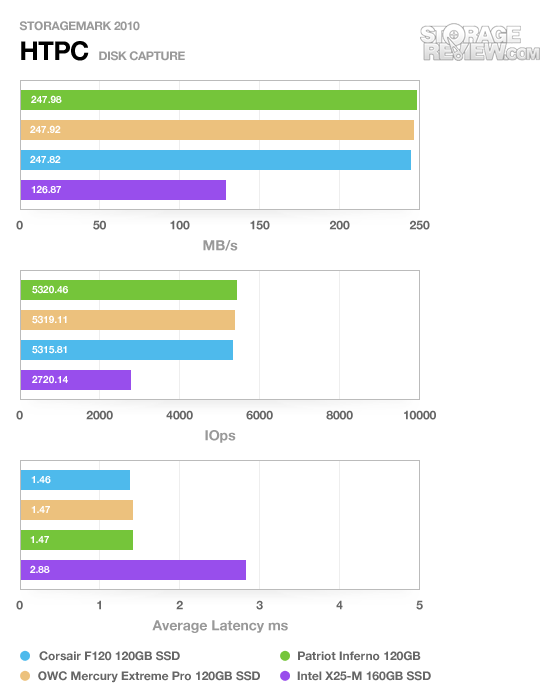 Under our HTPC bench, the three SandForce-based drives are nigh indistinguishable. The only drive that struggles is the Intel X25-M, which winds up being almost exactly half as fast.

The next test is our “Productivity” test, which consists of: a three hour period operating with 32-bit Vista running Outlook 2007 and connected to an Exchange server, browsing the internet with both Google Chrome and Internet Explorer 8, editing files in Office 2007, viewing PDFs in Adobe Reader, an hour of local music playback, and then two additional hours of streaming online music from Pandora. Under our “Productivity” suite the OWC Mercury Extreme Pro seems to shine a little more, while the Patriot Inferno hangs alongside the Corsair F120. Again, the Intel X25-M is about half as fast as the competing SandForce drives. The Inferno would likely be indistinguishable in use from the other two. Again, no real difference between the SandForce drives, but the Intel drive doesn’t come out looking quite as bad as it did during the other tests where it was hamstrung by comparatively poor write performance.

SandForce-based drives traditionally have excellent power consumption characteristics. Drives based around the SandForce controller don’t include an external memory buffer, which substaintially drops power consumption compared to SSDs like the Crucial RealSSD C300 or the Intel X25-M. The Inferno draws more power than the other SandForce drives, but otherwise is still pretty low. Intel’s X25-M seems positively gluttonous in certain respects compared to the other drives, but these numbers are still well below traditional mechanical hard disks.

The Patriot Inferno SSD comes with the industry-standard three year warranty. This warranty is comparable to ones offered by OCZ, Intel, Corsair, OWC, and Western Digital.

Though it excelled in many of our synthetic tests, the Patriot Inferno SSD doesn’t distinguish itself much in practice from the existing SandForce drives. This isn’t a bad thing though: these drives are all very fast, so it’s not like you can really lose by picking any one of them. By the same token, none of them offer that much over each other, even in our real-world tests. That said, the Inferno gets the job done and only falls down a little bit in power consumption area.

The 120GB Patriot Inferno SSD not only looks good, but it performs well too; handling all three of our real world scenarios as well as or better than comparable drives in addition to finding top of its class positions in our IOMeter server tests.