When we think about performance storage in the consumer space, most of us skip quickly to the enthusiast-grade SSDs, and for most usage scenarios, that makes sense. But there are cases when even the fastest SSDs don’t provide enough throughput – enter RAM disks. Storage devices built around volatile RAM have been in use for some time, but with RAM getting both faster and less expensive, there’s an increasingly viable case to be made for using RAM as a semi-permanent storage solution. In this case, we take a look at Patriot Memory’s Viper XTreme Division 4 RAM as used in a RAM disk scenario.

When we think about performance storage in the consumer space, most of us skip quickly to the enthusiast-grade SSDs, and for most usage scenarios, that makes sense. But there are cases when even the fastest SSDs don’t provide enough throughput – enter RAM disks. Storage devices built around volatile RAM have been in use for some time, but with RAM getting both faster and less expensive, there’s an increasingly viable case to be made for using RAM as a semi-permanent storage solution. In this case, we take a look at Patriot Memory’s Viper XTreme Division 4 RAM as used in a RAM disk scenario.

Patriot’s Viper Xtreme Division 4 Series memory kits are specifically engineered for Intel’s X79 platform and 2nd generation Core processors. Targeted for performance and overclocking, the kits include copper and aluminum heat shields for thermal protection. Kits come in 8GB and 16GB configurations, designed to run at PC3-12800 (1600MHz) speeds at 8-9-8-24 timings. Our review kit is the 16GB version, with 4 x 4GB sticks and carries a street price of about $100.

The Patriot Viper Xtreme Division 4 DDR3 is designed with overclocking in mind, featuring generous heat spreaders covering both sides of the memory stick. The heat spreaders are made of aluminum and copper to help with pulling heat from the RAM pieces and passively shedding the heat into the case with minimal airflow over the RAM. 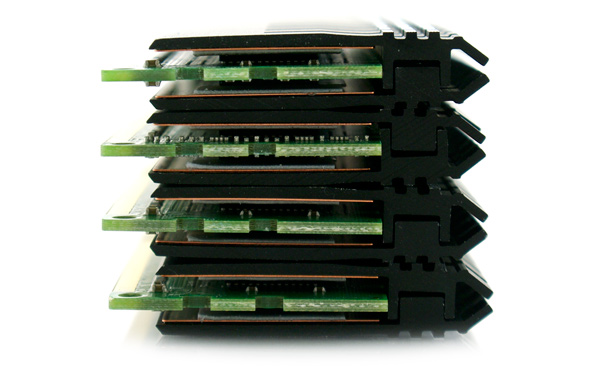 This design keeps the RAM functioning reliably overtime without the concern of voltage increases needed for overclocking pushing the thermal boundaries of the RAM itself.

In our RAM disk testing, we use RAMDisk software from Dataram ($15) for setup and configuration of the disk. With this RAM specifically targeting the new Intel X79 platform, we figured the best way to test it was on our new StorageReview Intel Core i7 3960X-powered test rig.

To test the speed of the Patriot RAM, we turned to our trusty and versatile IOMeter benchmark suite and scaled it up to be relevant in testing the much faster DDR3 memory. We used the same testing profiles, but adjusted for multiple managers and multiple workers to simulate an intensive multi-threaded working environment. Limited to 16GB of total system memory, we segmented off 8GB of RAM for the RAMDisk. For timing and RAM speed, we kept stock timings for each product as seen by the Intel DX79SI motherboard.

When looking at the performance of DRAM, it is important to understand the differences between it and fast enterprise storage solutions like a Fusion-io ioDrive, LSI WarpDrive, or OCZ Z-Drive R4. While some straight-line benchmarks could be comparable or in some cases faster than their multi-thousand dollar counterparts, the RAM disk solution is much more expensive per GB and limited in total capacity. In the case of this review we are working with 16GB of DDR3 memory, in a system with eight total RAM slots. Generally speaking the highest capacity easily-acquired  consumer RAM tops at 8GB per stick, putting a maximum limit of 64GB in our system. Compare that to 300GB on the LSI WarpDrive, 1.6TB on the OCZ Z-Drive R4, or 640GB on the Fusion-io ioDrive and you start to realize RAM can’t come close to competing in like capacities.

A big difference between DRAM and NAND Flash is its performance over time. Flash will progressively slow in performance until it reaches its steady-state level, while DRAM will maintain roughly the same speed 2 minutes in as it would 40 hours in. It also doesn’t have the same limited lifecycle of NAND, which progressively drops as the manufacturing processes shrink. So while you get incredibly high speeds with unlimited write cycles, you are still limited by capacity, especially in the client space.

Our first test looks at the speed in a sequential write environment with large block transfers. This particular test uses a 2MB transfer size with IOMeter, with 4k sector alignment and measures performance with a queue depth of 4.

The Patriot viper Xtreme Series Division 4 DDR3 RAM had no trouble throwing down some of the highest IOMeter figures we have seen to date. It measured 7,033MB/s read and 5893MB/s write over the duration of our test.

Speeds slowed slightly compared to the sequential large-block transfer test previously, but the DDR3 memory still had no trouble staying about 5,000MB/s in each test. It measured 5,232MB/s read and 5,668MB/s write.

Moving to an even smaller random access transfer size of 4K, we get closer to the packet size that might be found in a heavy random access environment. In the first test we look at expanded 4K read performance and how it scales from a queue depth of 1 to a maximum of 64. 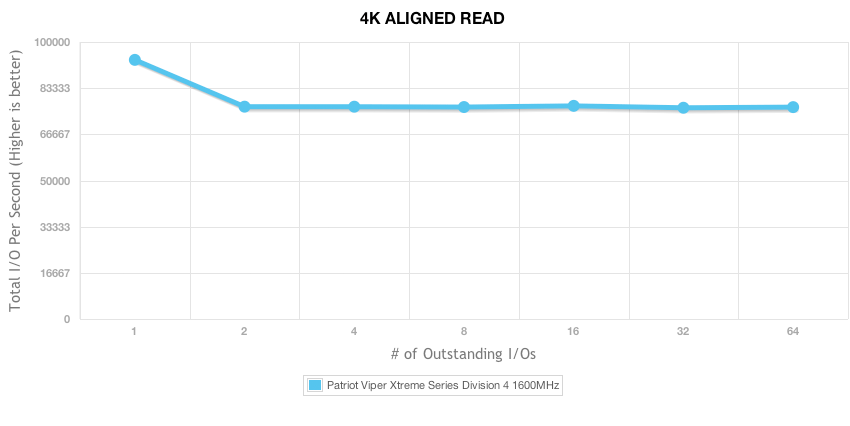 The Patriot RAM started off high at 93,548 IOPS, and tapered off to roughly 76,500 IOPS at higher queue depths.

Our next test looks at 4K random write performance at a static queue depth of 32 and results are recorded and averaged once the drives have reached steady-state. In the case of DRAM, steady was reached moments after the test began. While IOPS performance is a good metric to measure steady-state performance, another key area of interest is around average and peak latency. Higher peak latency figures can mean certain requests can backed up under heavy continuous access. 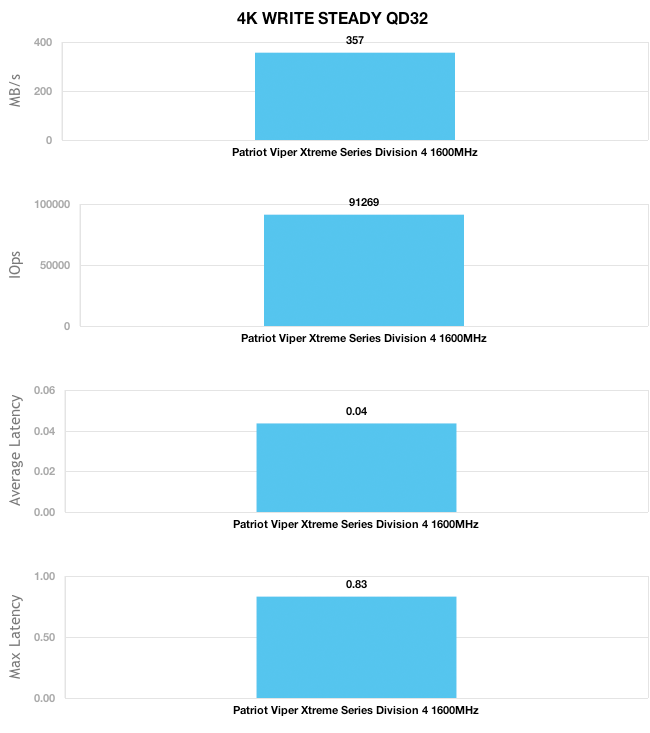 The 4K random write speeds are probably the most interesting test from this review. Not only did the RAM average a random write speed of 91,269 IOPS and 357MB/s, but it did so without even causing a blip on the maximum latency time. It had an average access time of 0.04ms with a peak of 0.83ms.

Our last series of synthetic benchmarks compare both enterprise drives in a series of server mixed-workloads with a static queue depth of 32. Like the synthetic benchmarks at the start of this review, these tests are also measured in steady state. Each of our server profile tests has a string preference towards read activity, ranging from 67% read with our database profile to 100% read in our web server profile.

The high performance of the Patriot Viper Xtreme Division 4 DDR3 memory translated well in our mixed load server profile benchmarks. It would be safe to say that any server running in a 100% DRAM environment would never have to worry about I/O becoming a bottleneck for day to day operations. Getting it up to the capacity needed for a server though is an entirely different problem though. 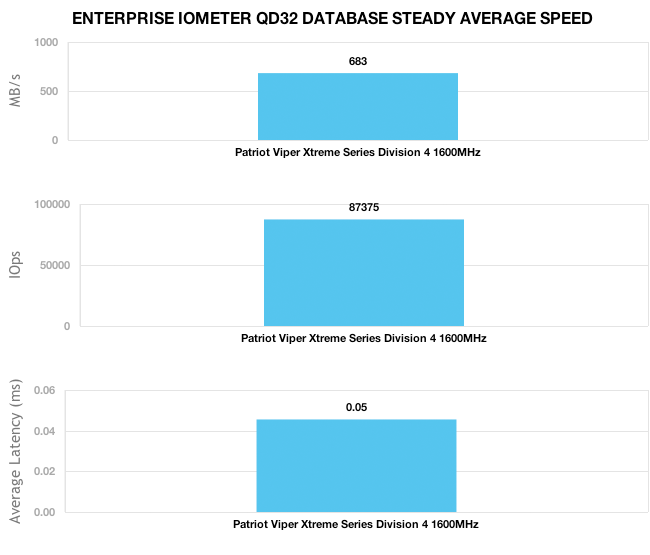 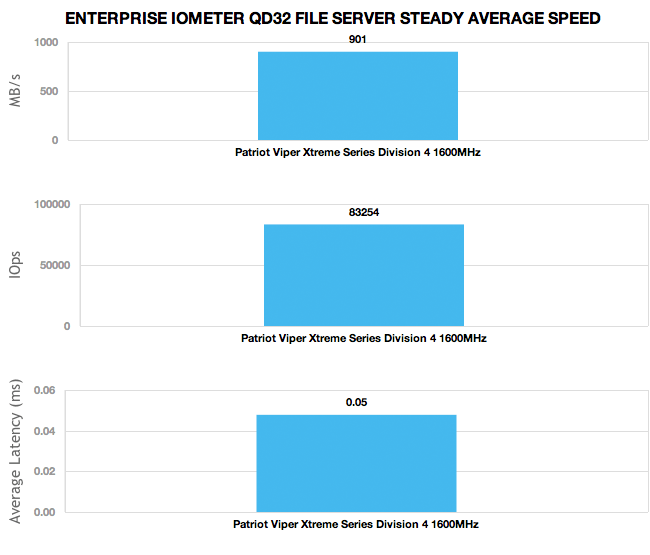 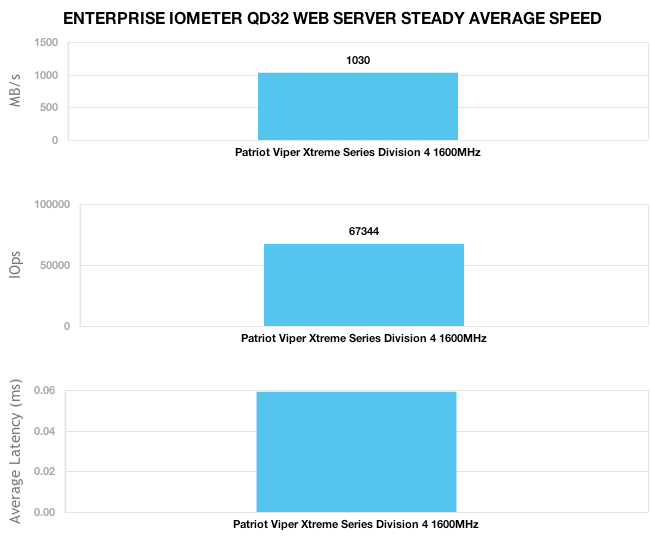 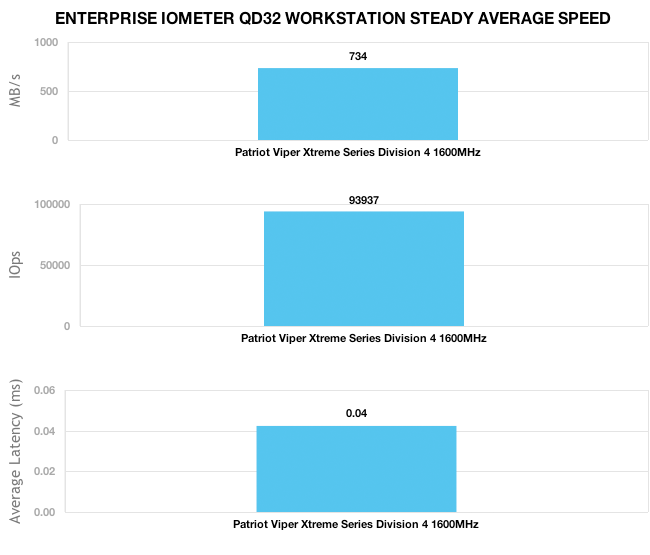 While far from practical in every case, for those who need a small amount of storage with an incredibly high level of performance a RAM disk solution might be worth considering. With a 16GB kit price of around $100, the performance the Patriot Viper XTreme Series Division 4 delivers is well beyond even the fastest consumer SSD. Depending on the system use profile, you could easily load specific projects into a large segment of RAM to remove the storage platform as the I/O bottleneck. This could apply to video production teams looking to render video faster, gamers looking for faster load times, programmers reducing the time needed for hourly/daily code builds, or even graphic designers looking to speed up image manipulation times. Different scenarios are out there where users need a smaller segment of storage with near unlimited performance that currently flash storage options can’t touch in speed or endurance. In those cases time is money, and RAM offers an attractive storage solution.

Patriot Memory’s Viper XTreme Division 4 RAM kit is one of the more cost effective on the market, making it an ideal match for a RAM disk project. 76,500 IOPS even over a small capacity is impressive and the kind of throughput that could save time and money for those who need rapid storage that doesn’t slow down under pressure.