The PhotoFast i-FlashDrive HD is a portable storage device compatible with all Apple iPods, iPads and iPhones using the included 30-pin connector and Lightning to 30-pin adapter that enable users to expand the capacity of their iOS devices by 8GB, 16GB, 32GB or 64GB. Those capacity steps optimize the i-FlashDrive HD for users who require portable storage, those with existing devices who need more capacity but aren’t quite ready to shell out for an upgrade, and for those who simply need more capacity than Apple products natively feature. Enhancing its strengths, the i-FlashDrive HD is the only two-way storage device between iOS devices and Mac/PC utilizing dual connectors.

The PhotoFast i-FlashDrive HD is a portable storage device compatible with all Apple iPods, iPads and iPhones using the included 30-pin connector and Lightning to 30-pin adapter that enable users to expand the capacity of their iOS devices by 8GB, 16GB, 32GB or 64GB. Those capacity steps optimize the i-FlashDrive HD for users who require portable storage, those with existing devices who need more capacity but aren’t quite ready to shell out for an upgrade, and for those who simply need more capacity than Apple products natively feature. Enhancing its strengths, the i-FlashDrive HD is the only two-way storage device between iOS devices and Mac/PC utilizing dual connectors. 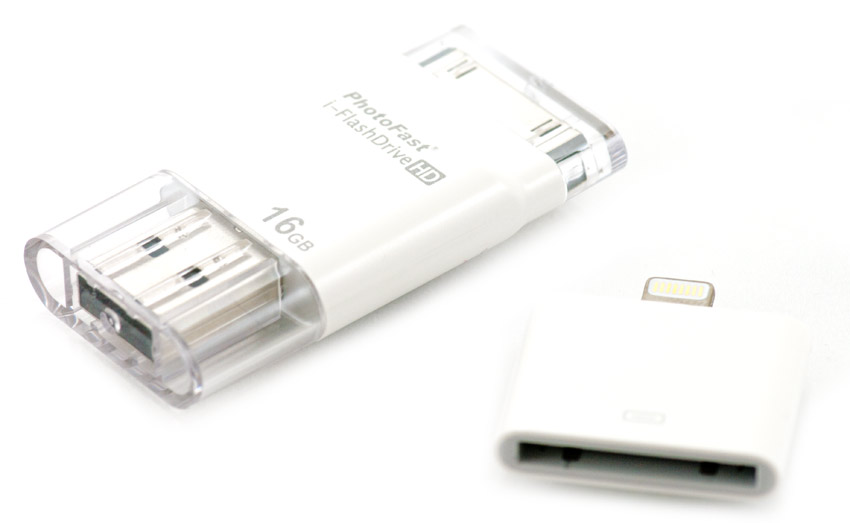 The PhotoFast i-FlashDrive HD includes several features to make the experience simple. Of great significance is that unlike portable storage solutions that are HDD-based, the i-FlashDrive doesn’t require a rechargeable battery or a network to setup and operate. While many new HDD-wireless options now produce their own networks, the i-FlashDrive eliminates the hassle of using a wireless network and of considering battery life. Additionally, this device includes a free app from the App Store so that users can gain access to a few features including: secure file encryption to keep files safe, direct Airplay streaming, direct Dropbox link, easy document viewing and playback of audio/video files.

The PhotoFast i-FlashDrive looks like a flash drive with its USB plug, just with a 30-pin connector on the other end. The device features an all-white color scheme that blends well with Apple products. On top of that, the plastic that composes the body feels strong. Adding protection, the i-FlashDrive includes two protective caps – one for the 30 pin connector and one for the USB plug. However, there wasn’t a cap for the lightning adapter tip.

The included lightning adapter is the same one designed and sold by Apple that normally runs $29.00 at the Apple Store. The final design note is that during activity, a blue LED indicator light inside of the i-FlashDrive blinks.

Setting up the i-FlashDrive is really simple. It offers plug-in, drag-and-drop for computers, and upon first installation on an iOS device, users are automatically guided to the App Store to download the corresponding app. Once this is completed, users can start moving files around and accessing content right away. There’s also a tutorial on the flash drive to get users going on all available functions.

The interface is clean and appears to have taken a lot of its design notes from the iOS interface to create a seamless integration with iOS products. 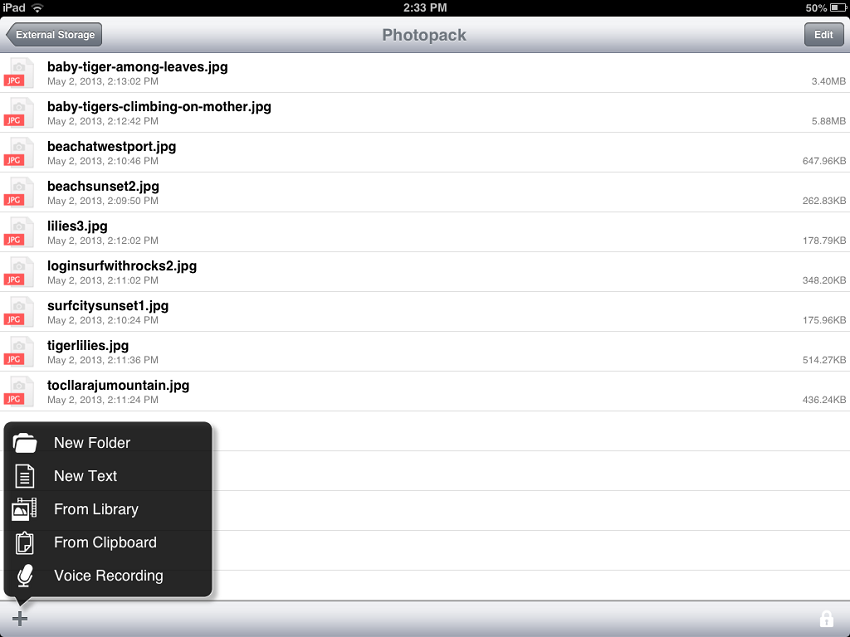 The main function of the app is to act as a file manager for content. (Users should keep in mind that the app only accepts files natively supported by iOS.) The i-FlashDrive HD app home screen shows four options: contact backup, local storage, external storage, and Dropbox. Additionally, tapping the gear icon in the bottom left allows users to change settings and view the video tutorial.

Diving into the functionality, tapping contact backup yields single push backup and restore of contacts. The two storage options (local and external) provide views of user files and folders. Users can click on music and videos to play them just like they would using the native Apple environment. Users can also tap the plus icon at the bottom left of the screen to add folders, create a .txt file, make a voice recording, move information from the clipboard, and transfer photos from the device to the i-FlashDrive and vice versa. Transferring the Photo Stream is a breeze by clicking individual files or tapping all to move them all at once. When selecting to move photos, users can also select the quality as well as the photo size. 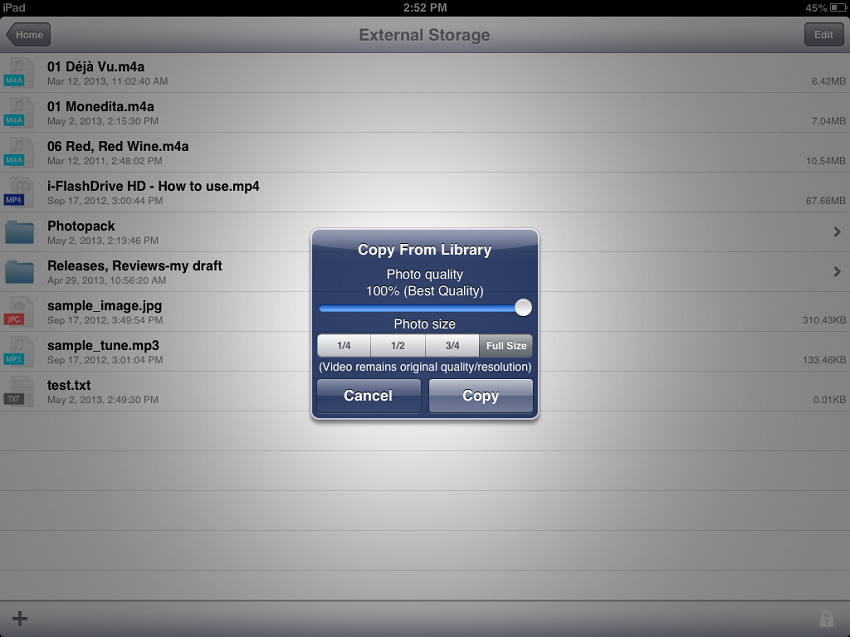 Users can also select to encrypt their files to protect them by tapping the padlock icon in the bottom right. From there, they tap lock or unlock, and then choose to which files to apply the action. The encryption process does take several minutes to complete for files in the 50-100MB range, though files such as text documents under 1MB can perform the same task quickly. We found that also moving large files from folder to folder takes quite a bit of time. Overall though, the process is very easy to complete, with all of the icons and actions intuitively designed.

Rounding out the app features, users can also log-in to their Dropbox account directly through the app. This provides another form of capacity expansion right from within the app. Users without a Dropbox account can register for a free 2GB account. In the app, users just need to use their log-in credentials, and from there they can use the same functions to move and edit files that they can elsewhere in the app.

For general photo sharing, we tested the i-FlashDrive by moving 20 photos (~17MB) from the i-FlashDrive to our iPad which took 15 seconds. We also transferred them from the iPad back to the i-FlashDrive which took 3 times as long at 45 seconds. For more precise measurement of the flash drive itself, we used our Consumer Testing Platform to measure transfer speeds from the PhotoFast i-FlashDrive utilizing its USB 2.0 interface. 2MB sequential read and write speeds came in at 19.16MB/s and 5.05MB/s respectively, while random large-block transfers measured 19.07MB/s read and 1.71MB/s write. The speeds certainly aren’t terribly impressive on the face, but this product is more about giving your iOS device more storage space than the speed. Couple that with the interface limitations on the iOS devices themselves and the drive does what it needs to do, even if we’re generally expecting faster transfer speeds with USB flash devices.

The PhotoFast i-FlashDrive HD is a flash drive that provides up to 64GB of additional storage for iPods, iPads and iPhones using the included 30-pin connector or the included Lighning to 30-pin adapter. The i-FlashDrive connects right into desktops and notebooks just like any other flash drive, but going beyond traditional flash drives, it has dual connectors to make plug-ins simple. The device has a specific audience in mind; it targets those who require additional storage but don’t want to use wireless hard drives that require recharging or other bulkier types of storage to increase their capacity. The i-FlashDrive is super portable with its lightweight, compact design and works well across multiple iOS devices.

All of this accounted for, the PhotoFast i-FlashDrive is well-featured, yet on the other hand, the device is very expensive for what it is. At the same price point, users could essentially just go up a tier and pay more to Apple to gain access to increased native storage with no external device necessary. Additionally, the i-FlashDrive provides mediocre transfer rates when connected to a computer as it uses USB 2.0. However, the device is still appropriate for users who already own an Apple device and need to upgrade their storage, or for users who need more storage than Apple natively provides (which is 128GB on the newest iPad).

The PhotoFast i-FlashDrive isn’t for everyone, but with a well-designed app and the ability to increase native Apple storage, it will woo some consumers who want additional storage flexibility with their iOS devices.