Available in both 2.5 inch and M.2 form factors, the release of the Plextor M7V Series SSD marks the company’s first venture into TLC NAND. Traditionally, this type of NAND is featured in budget drives, as it is less expensive than other NAND technology and is thus making it much more affordable for consumers. TLC comes with technical limitations, however, as endurance and performance are much lower than higher-class MLC-based SSDs. Plextor boldly claims that the M7V Series will change that, indicating it exceeds the current TLC SSD’s key technical limits and has the ability to reach a P/E cycle of up to 2,000 times.

Available in both 2.5 inch and M.2 form factors, the release of the Plextor M7V Series SSD marks the company’s first venture into TLC NAND. Traditionally, this type of NAND is featured in budget drives, as it is less expensive than other NAND technology and is thus making it much more affordable for consumers. TLC comes with technical limitations, however, as endurance and performance are much lower than higher-class MLC-based SSDs. Plextor boldly claims that the M7V Series will change that, indicating it exceeds the current TLC SSD’s key technical limits and has the ability to reach a P/E cycle of up to 2,000 times. 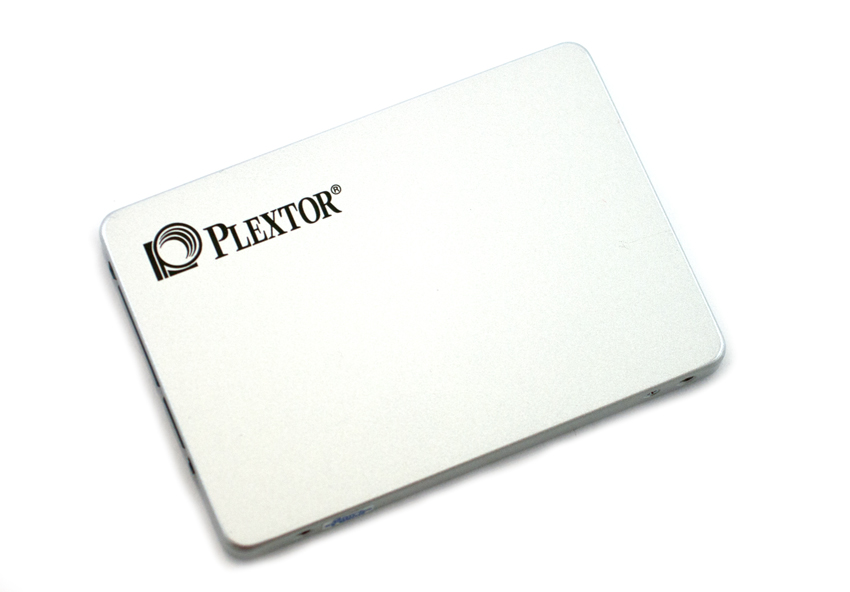 Leveraging the “industry’s highest-grade components,” along with advanced firmware, the TLC-based M7V is equipped with a Marvell controller, coupled with Toshiba’s latest 15 nm process TLC NAND flash memory. In addition, the M7V Series uses exclusive technologies specifically built for the drive. These include: PlexNitro (a customized write acceleration technology), the Low Density Parity Check (a troubleshooting technology which boasts three times the average rate), and PlexTurbo (a software that applies system memory to lower the amount of reading and writing).

With these technologies combined, Plextor quotes the M7V with sequential read and write speeds of 560MB/s and 530MB/s, respectively, while claiming 98,000 and 84,000 IOPS in random reads and writes.

The M7V series also comes with the proprietary software, PlexCompressor and PlexVault. PlexCompressor compresses rarely used files without affecting the SSD’s efficiency; as a result, this provides more storage space for users. PlexVault sets up an exclusive space for sensitive information by simply using a few hot keys. This provides users with convenient access to secure and private data.

Both the look and feel of the Plextor M7V series is in line with other Plextor SSDs, all of which focus on a minimalistic design. The M7V’s enclosure is comprised of a smooth, metal build, with just the Plextor branding located on the top left of the drive. Its small 2.5-inch form factor allows it to support a plethora of use cases. 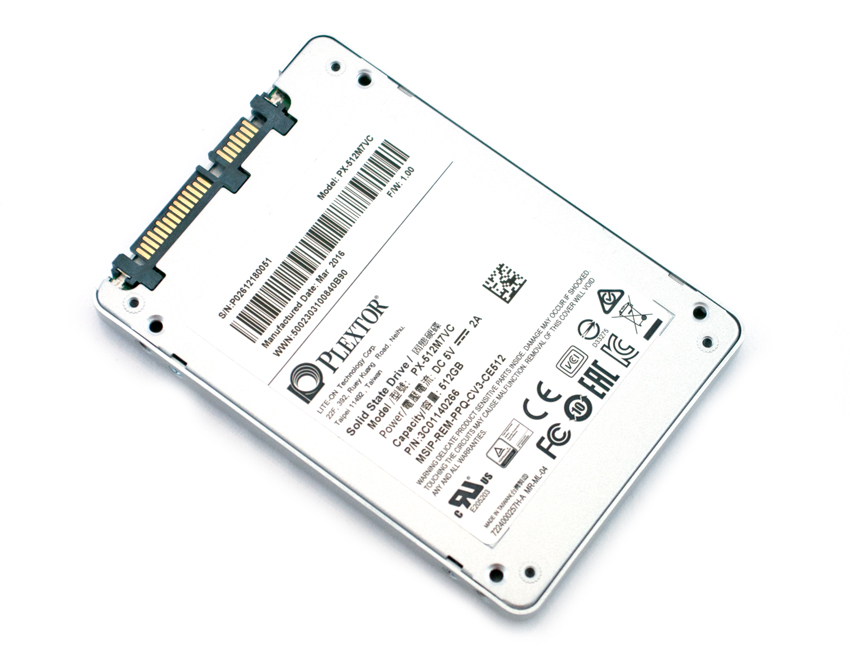 Turning the drive over shows a label that displays important information about the drive (certifications, model number, serial number, etc.). As is the case with most SSDs, the side profiles also come with four screw holes for easy mounting. 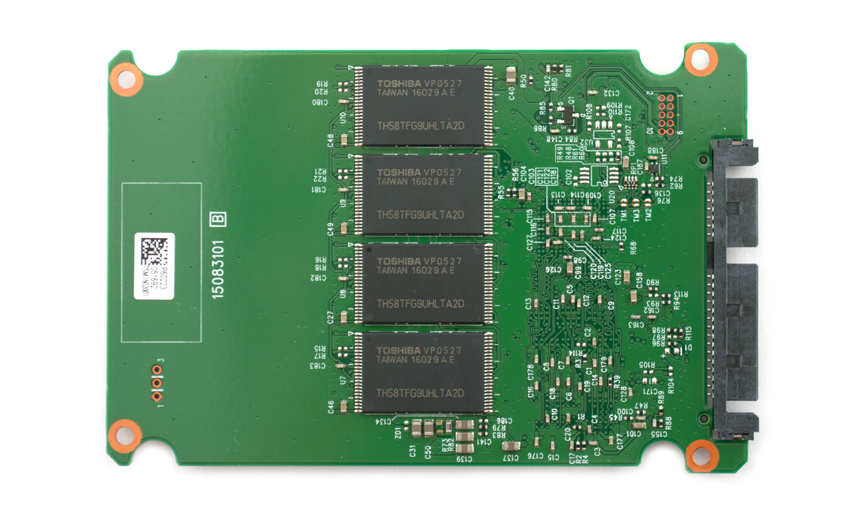 Once the cover is removed, you will see the very compact PCB board. Visible is the Toshiba 15nm TLC and the Marvell 88SS1074B1. 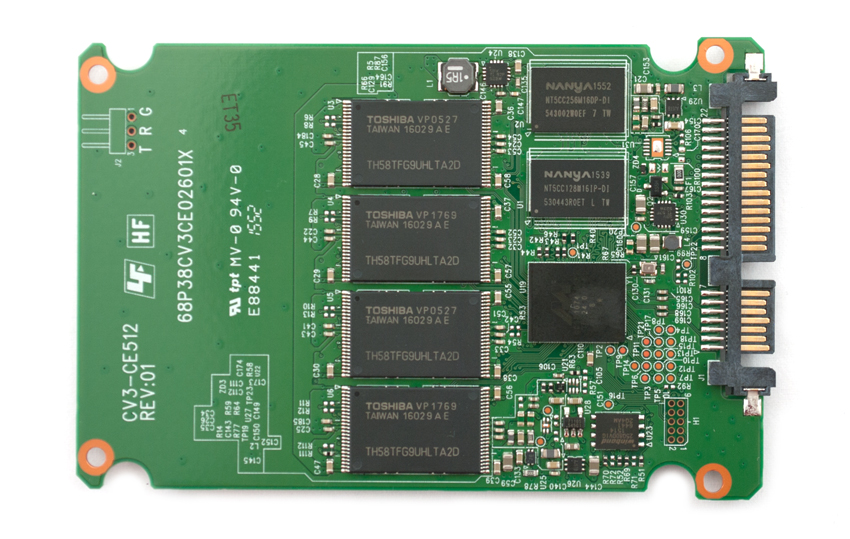 The Plextor M7V supports the normal SATA 6Gb/s interface; however, it is also backwards compatible with both SATA 3Gb/s and SATA 1.5Gb/s (though the M.2 form factor only supports SATA 6Gb/s).

All consumer SSD benchmarks are conducted with the StorageReview HP Z620 Workstation. We compared the Plextor M7V with the following drives:

In our first test, we measured 2MB sequential performance. Here, M7V had a good showing with a good 493.06MB/s read and 428.16MB/s write, placing it just behind the Samsung 850 EVO.

When looking at random performance of the same test, the M7V saw a significant drop as it posted just 230.82MB/s and 225.57MB/s for reads and writes respectively. This was well behind the next best drive (SanDisk X400) taking last place.

Looking at MB/s performance during the same test told a similar story. Here, the M7V posted results that placed it at the bottom of the pack, with 28.04MB/s read and 73.8MB/s write. Again, the top performing drive was the Samsung 850 EVO 2TB with 40.18MB/s read and 116.20MB/s write.

The 4K write latency benchmark looks at both the average and maximum readings. In this workload, the M7V posted an average latency of 0.0527ms with 688.18ms in maximum latency. Again, these results (particularly its maximum latency) placed the Plextor drive at the bottom of the pack. 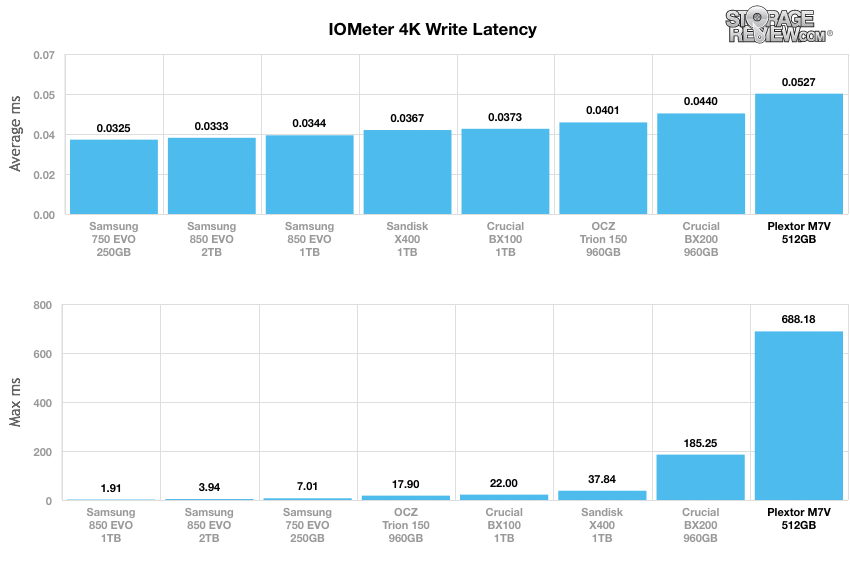 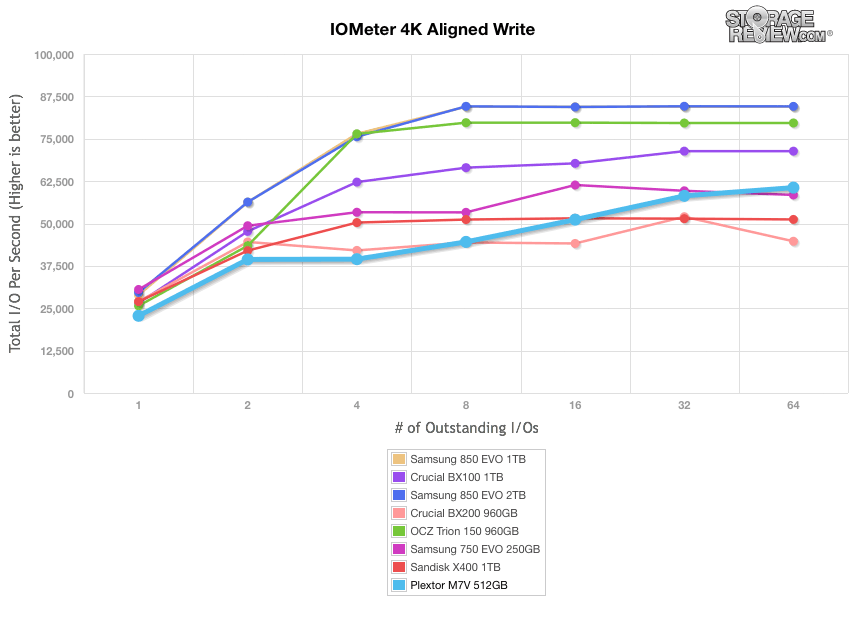 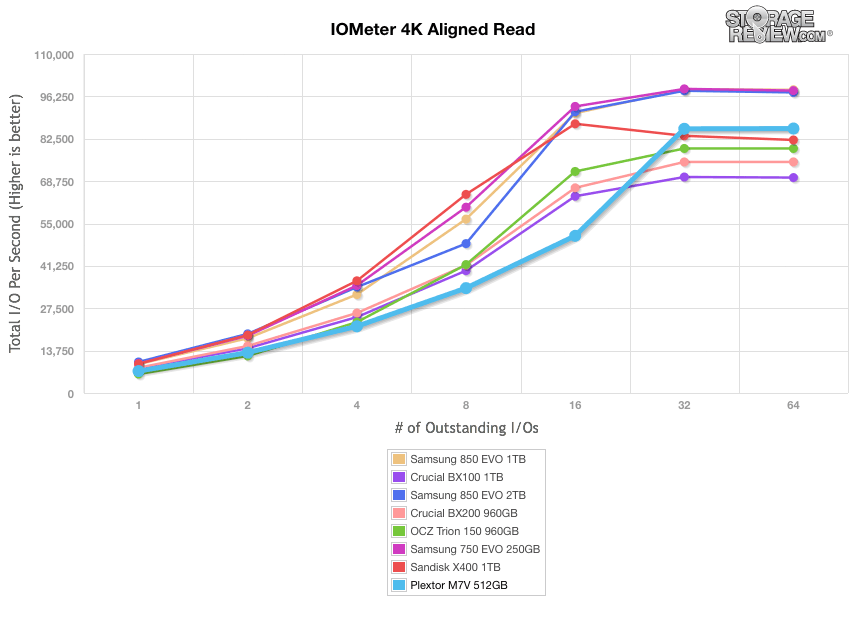 The first is our database profile, which consists of a 67% read and 33% write workload mix primarily centered on 8K transfer sizes. Here, the Plextor drive continued its middle-of-the-pack performance with an IOPS of 7,087.66 in burst with 32,842.71 in the terminal. This was good enough for 3rd place. 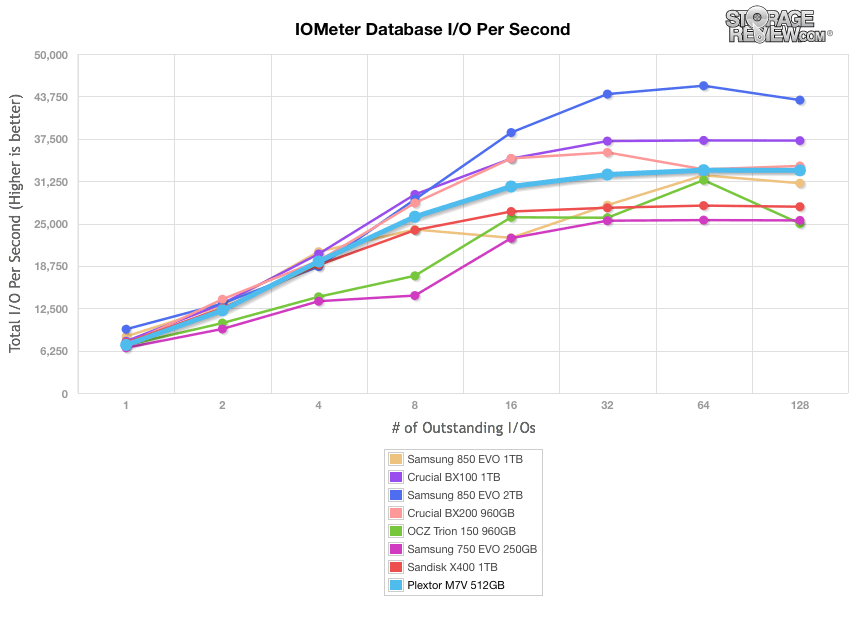 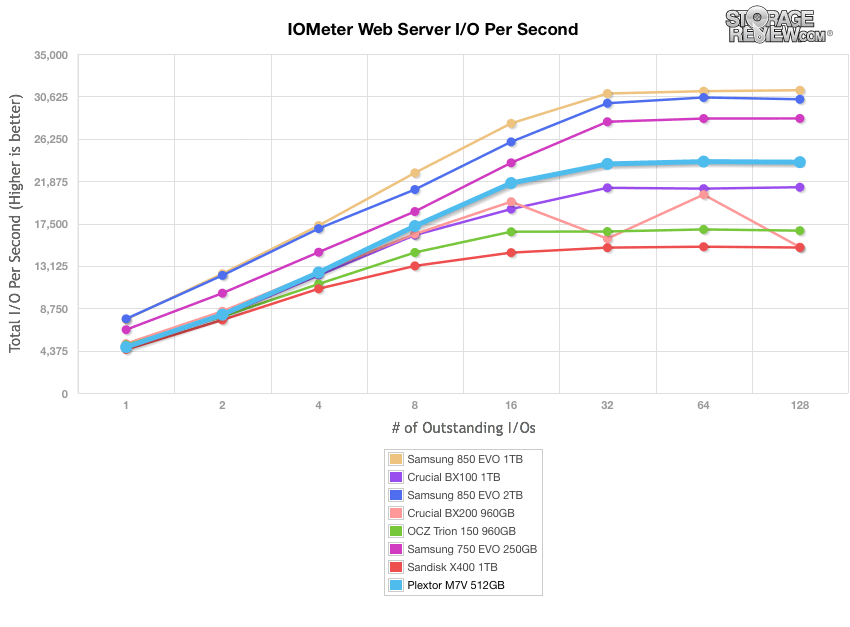 The next profile looks at a file server, with 80% read and 20% write workload spread out over multiple transfer sizes ranging from 512-byte to 64KB. Here, the Plextor SSD boasted a range of 5,176.24 IOPS and 25,870.10 IOPS for third place among the leaderboard. 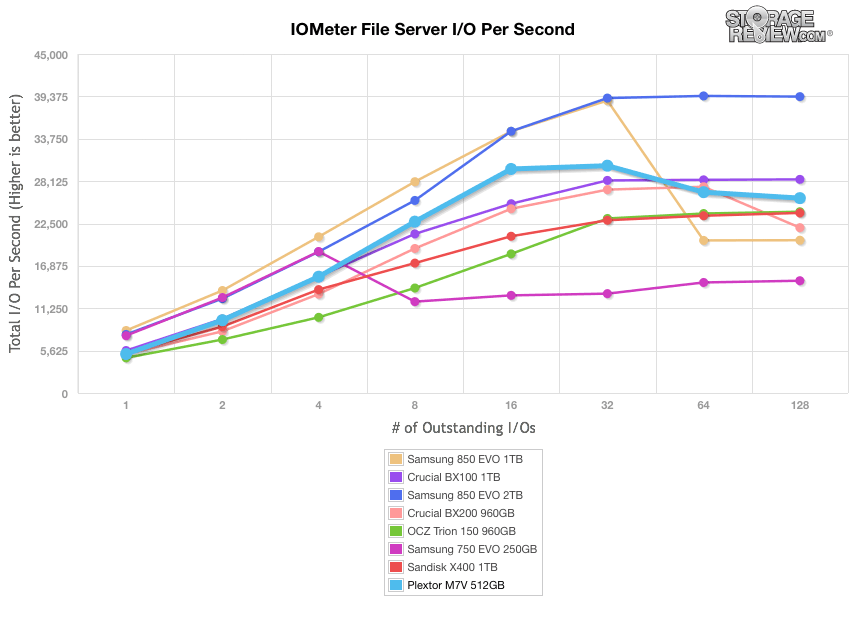 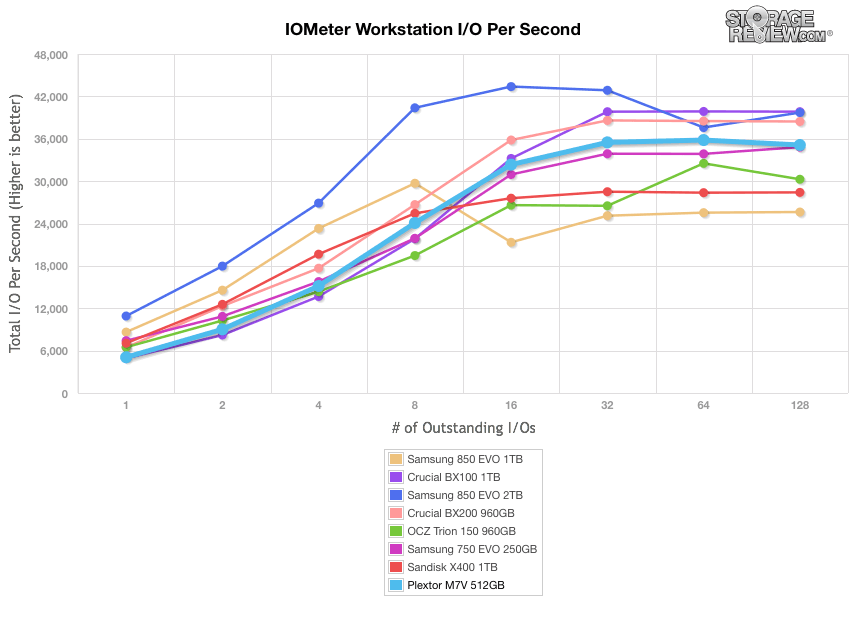 For the average consumer, trying to translate random 4K write speeds into an everyday situation is pretty difficult. It helps when comparing drives in every setting possible, but it doesn’t exactly translate into faster everyday usage or better game loading times. For this reason we turned to our StorageMark 2010 traces, which include HTPC, Productivity, and Gaming traces to help readers find out how a drive might rank under these conditions. 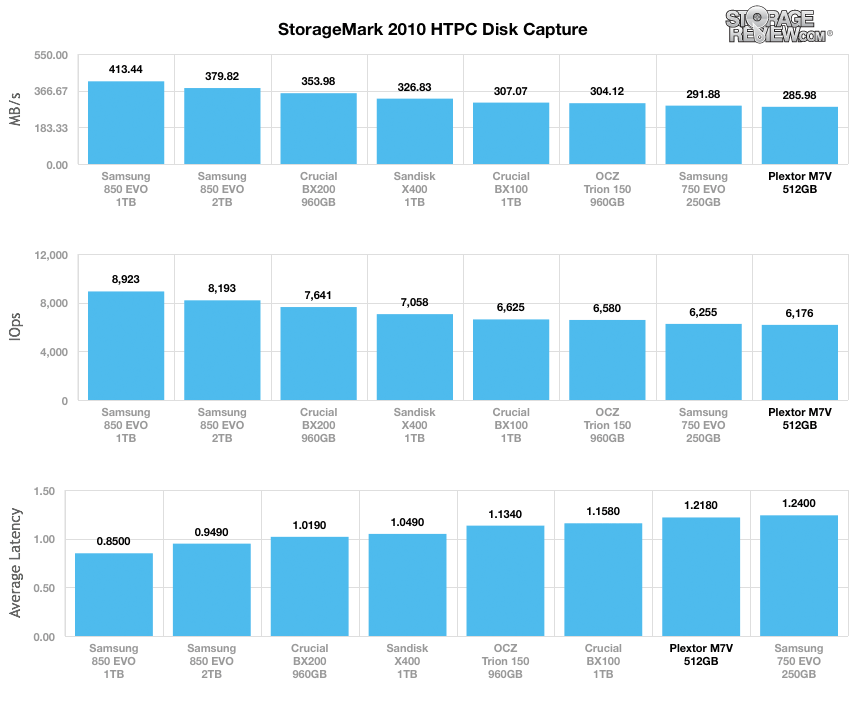 Our second real-life test covers disk activity in a productivity scenario. For all intents and purposes, this test shows drive performance under normal daily activity for most users. This test includes: a three hour period operating in an office productivity environment with 32-bit Vista running Outlook 2007 connected to an Exchange server, web browsing using Chrome and IE8, editing files within Office 2007, viewing PDFs in Adobe Reader, and an hour of local music playback with two hours of additional online music via Pandora. In this trace, we recorded 4,830MB being written to the drive and 2,758MB being read.

In our Productivity trace, the Plextor M7V picked up its performance with 292.80MB/s, 10,015 IOPS, and 0.77ms in average latency. This was good enough for 3rd place among the comparables, though still well behind the Samsung 850 EVO. 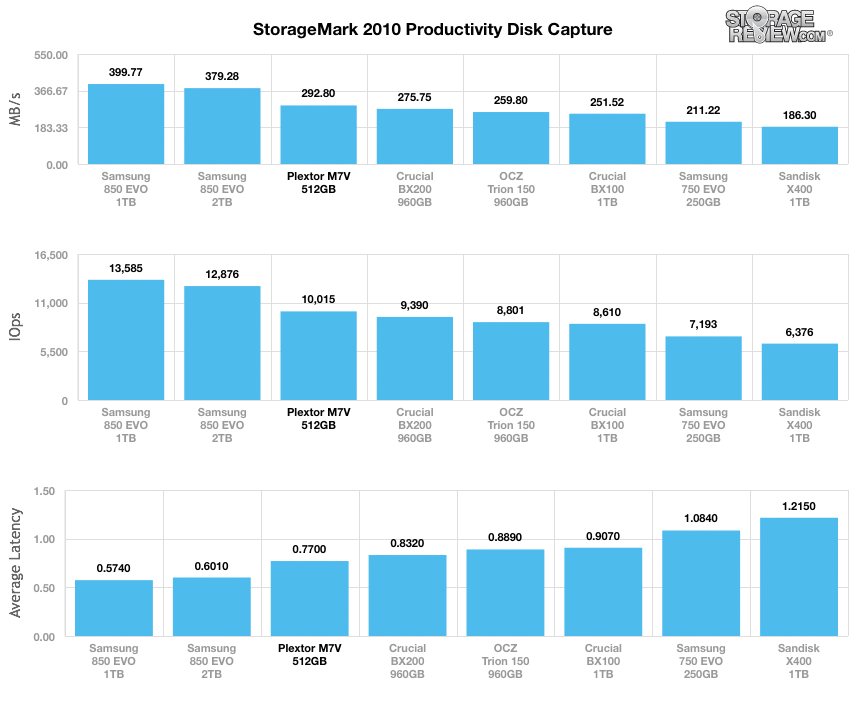 Our third and last real-life test covers disk activity in a gaming environment. Unlike the HTPC or Productivity trace, this one relies heavily on the read performance of a drive. To give a simple breakdown of read/write percentages, the HTPC test is 64% write and 36% read, the Productivity test is 59% write and 41% read, while the gaming trace is 6% write and 94% read. The test consists of a Windows 7 Ultimate 64-bit system pre-configured with Steam, with Grand Theft Auto 4, Left 4 Dead 2, and Mass Effect 2 already downloaded and installed. The trace captures the heavy read activity of each game loading from the start, as well as textures as the game progresses. In this trace, we recorded 426MB being written to the drive and 7,235MB being read. 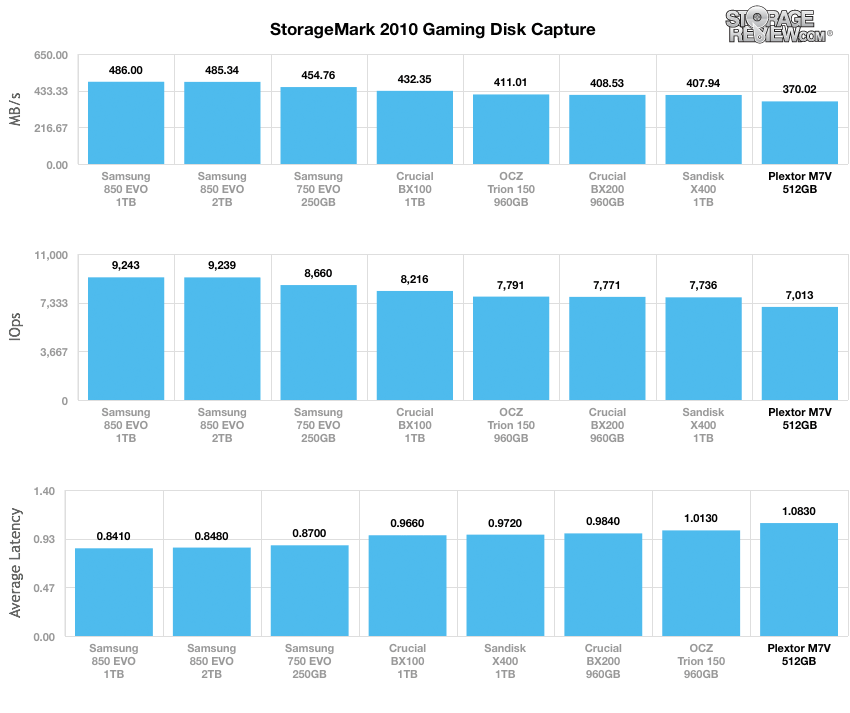 The Plextor M7V series is the company’s first line SSDs to leverage TLC NAND, specifically Toshiba’s latest 15nm technology. The M7V SSDs come equipped with a new generation Marvell control chip and use exclusive technologies that have been specifically designed for the drive. These include the company’s customized write-acceleration technology, PlexNitro and PlexTurbo software, which applies system memory to lower the amount of reading and writing. As far as performance goes, Plextor claimed that their new drive had been designed in such a way that it would overcome endurance and performance shortcomings that are inherent in the inexpensive TLC NAND. Results, however, were a mixed bag.

During our 2MB sequential benchmark, the M7V boasted fairly good results with 493.06MB/s read and 428.16MB/s write, placing it just behind the Samsung 850 EVO. In random results of the same test, the M7V took a serious turn in performance, as it posted just 230.82MB/s and 225.57MB/s for reads and writes respectively, and well behind the next best drive for last place. This trend continued during our consumer synthetic benchmarks, as it landed at the bottom of our leaderboards for our smaller 4K random transfer and latency benchmarks. During our 4K aligned read and write workloads, the M7V improved significantly, as it scaled from 22,767.78 IOPS up to 60,585.10 IOPS and 7,110.18 IOPS to 85,811.47 IOPS, respectively. These results placed the Plextor drive in the middle of the pack. Our series of server mixed-workloads told a similar story, as it consistently placed in the upper middle tier of the leaderboard as well.

Ultimately, the Plextor M7V’s story isn’t about performance. Its incredibly low price tag at just $50 for the 128GB makes it one of the most inexpensive SSDs on the market as far as price-per-GB goes. Because of this, the Plextor M7V will certainly be an attractive option for those looking for an inexpensive HDD alternative, even with its mixed performance profile.

Despite its modest performance profile, the Plextor M7V series is an inexpensive SSD and a viable option for those looking to upgrade their HDD rigs to solid-state technology.