The DS3615xs is Synology’s top-performing and highest-capacity DiskStation (tower form factor), with reported transfer speeds of 2,214MB/s (read) and up to 288TB of raw storage (with two DX1215 expansion units). This NAS was designed to serve large-scale businesses that want to set up a comprehensive server while retaining the option of expanding their storage capabilities in the future. As it is a constituent of Synology’s XS Series, the DS3615xs leverages top-of-the-line hardware, including a 3.4GHz CPU and 4GB of DDR3 ECC RAM (with the ability to expand to 32GB of RAM). As with all of their DiskStation units, the DS3615xs makes use of Synology’s DiskStation Manager (DSM) interface, as well as all of the features and applications therein.

The DS3615xs is Synology’s top-performing and highest-capacity DiskStation (tower form factor), with reported transfer speeds of 2,214MB/s (read) and up to 288TB of raw storage (with two DX1215 expansion units). This NAS was designed to serve large-scale businesses that want to set up a comprehensive server while retaining the option of expanding their storage capabilities in the future. As it is a constituent of Synology’s XS Series, the DS3615xs leverages top-of-the-line hardware, including a 3.4GHz CPU and 4GB of DDR3 ECC RAM (with the ability to expand to 32GB of RAM). As with all of their DiskStation units, the DS3615xs makes use of Synology’s DiskStation Manager (DSM) interface, as well as all of the features and applications therein. 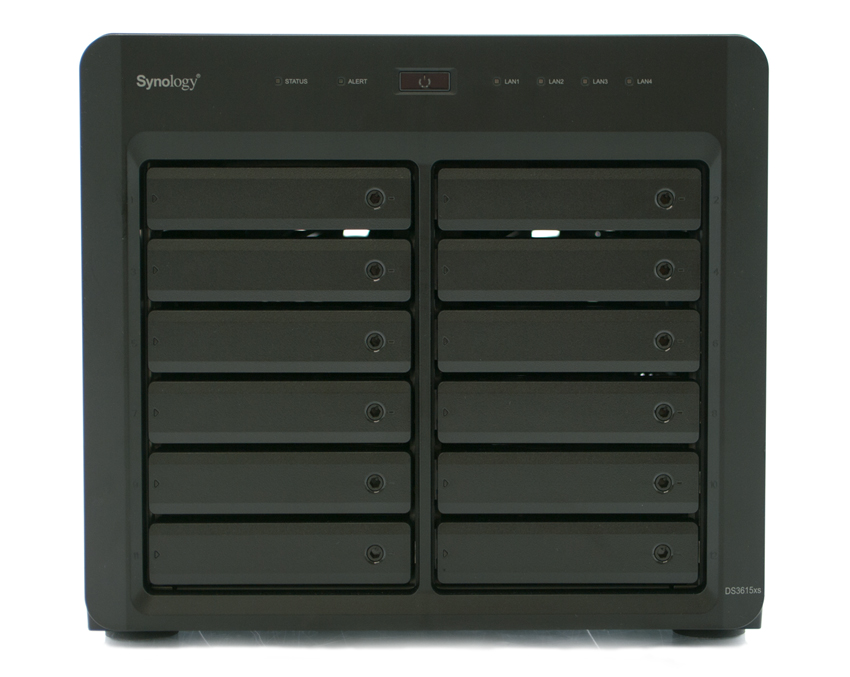 Synology emphasizes security in all of their DiskStations, with applications and contingencies that prevent unauthorized file access and maintain system integrity in the event of hardware failure. Security Advisor and AppArmor are built-in programs that work to maintain server security by scanning system settings for potential security holes, removing malware, and blocking unauthorized programs from accessing system resources. The DS3615xs also supports Antivirus packages, firewall, and AES encryption. The hardware encryption engine that comes standard in the DS3615xs is capable of encrypting files on the fly and delivering them at only a slight reduction in transfer speed (reported 2,182MB/s). Synology High Availability (SHA) minimizes downtime by combining active and passive DiskStation servers into one cluster with mirroring. Shared Folder Sync replicates data in real-time and stores it to the offshore passive server. In the event of network failure, the passive server takes over automatically. Synology offers efficient backups with the DS3615xs through LUN Backup, LUN Snapshot, and LUN Clone. These applications support iSCSI LUN backup and allow administrators to create snapshots without much storage usage (snapshots only amount to 1/1000th of the original volume).

A key feature of the DS3615xs is its scalability, both in terms of raw storage capacity and RAM. Since there are two expansion ports, two 12-bay DX1215 expansion units can be added to expand the total raw storage capacity to 288TB. Although the DS3615xs comes with 4GB of RAM, there are four memory slots available, allowing users to expand system memory to 32GB with four 8GB memory modules. The DS3615xs comes with one PCIe 3.0 x8 slot, so that 10GbE Network Interface Cards (NIC) can be installed to expand from the default 4 Gigabit ports. Synology’s SSD cache technology accommodates read/write-optimized SSDs for performance-focused businesses; users can more or less customize the specifications and functionality of the DS3615xs according to their specific needs.

With 12 bays and two 120mm fans, the DS3615xs is one of the larger NAS units we have reviewed. The drives (arranged in two columns of six) are accessed from the face of the device. Each bay is numbered and has a corresponding status LED and hex lock. 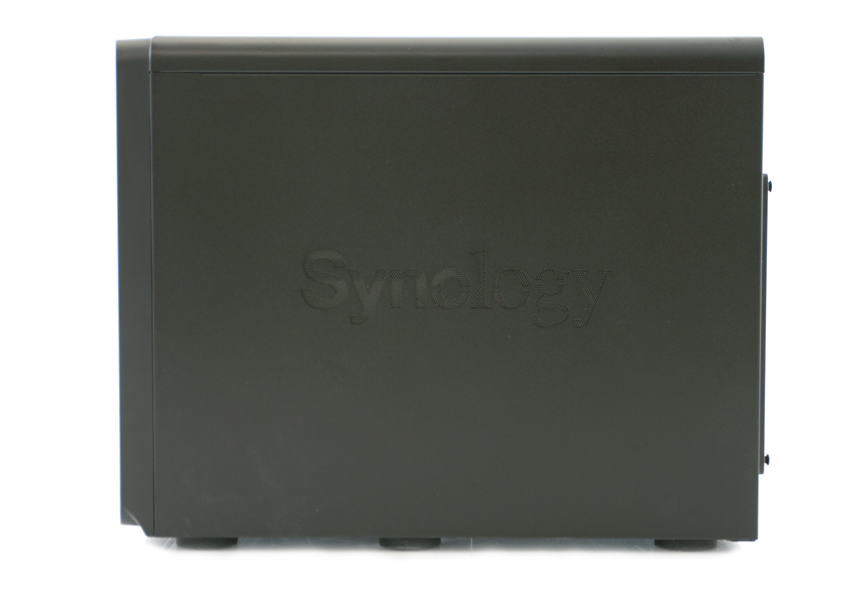 The power button is also located on the face of the DS3615xs, along with a system status LED, alert LED, and the four LAN LEDs. The face and sides of the DS3615xs chassis are mostly plain black other than some simplistic branding. 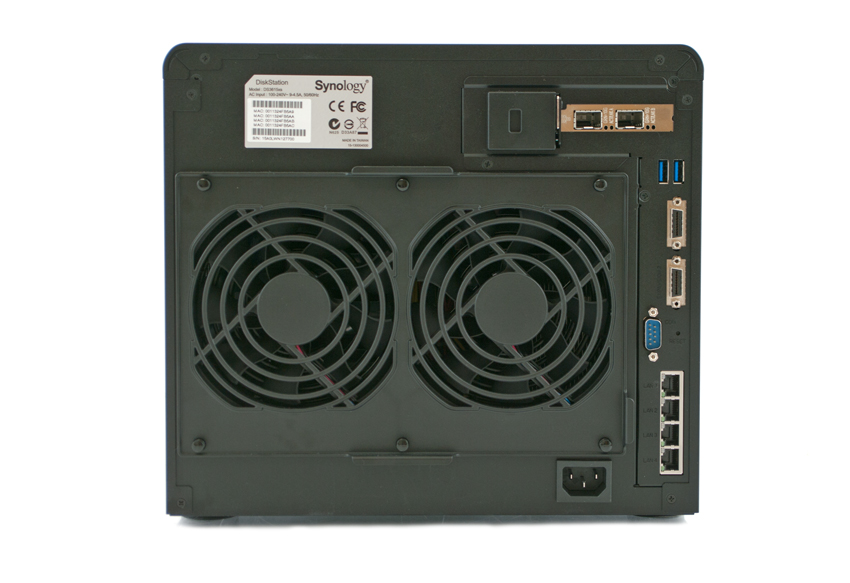 The two system fans take up most of the back of the DS3615xs, which has a simple layout overall. The various ports and reset button are aligned vertically to the right of the fans (10GbE expansion slot, two USB 3.0 ports, two DX1215 expansion slots, one serial port, four LAN ports, and the AC power adaptor).

Our first set of tests for the DS3615xs is the Sysbench benchmark, which measures average MySQL TPS (Transactions Per Second), average latency, as well as average 99th percentile latency at a peak load of 32 threads in our TPC-C workload. In this test, we leveraged an all-flash configuration using 12 Toshiba HK3R2 SSDs in RAID10.

The DS3615xs performed well in terms of average TPS (3,406 IOPS). Compared to other enterprise NAS servers that we have tested in the past, this transaction rate is fairly competitive.

The DS3615xs reached an average latency of 75.4ms in our sysbench test, which is acceptable but somewhat slow.

In the first of our enterprise workloads, we measured a long sample of random 4k performance with 100% write and 100% read activity using the CIFS protocol. The drives performed better when configured in iSCSI for the most part. In this configuration, the Seagate HDDs posted 3,423 IOPS and 2,148 IOPS (read and write, respectively), and the Toshiba SSDs posted 105,667 IOPS and 101,678 IOPS, respectively.

Results were similar in the average latency benchmark, with the SSDs outpacing the HDDs by several orders of magnitude (with read and write latency as low as 2.42ms and 2.51ms respectively), which is expected. Once again, iSCSI was the ideal configuration.

In terms of standard deviation, iSCSI was the ideal configuration for the Toshiba SSDs (3.05ms read and 2.14ms write). For the Seagate HDDs, write functions were slightly more consistent when configured in CIFS (85.58ms). Read functions for the HDDs were still better in iSCSI (58.08ms).

In our next benchmark, we doubled the transfer size to 8K. There was a less drastic difference between HDD and SSD performance in this test, although the Toshiba SSDs were still faster. For the Toshiba SSDs, there was a noticeable improvement in performance in iSCSI vs. CIFS (94,958 IOPS and 84,153 IOPS vs. 92,123 IOPS and 63,174 IOPS in read and write, respectively). Read performance was more or less the same, regardless of configuration for the Seagate HDDs (around 75,000 IOPS), but write performance was stronger in CIFS (53,838 IOPS versus the 15,053 IOPS of iSCSI).

The next four charts are based on a protocol consisting of 70% read operations and 30% write operations with an 8k transfer size. The workload is then varied from 2 threads and a queue depth of 2 up to 16 threads and 16 queue. The Toshiba SSDs configured in iSCSI outclassed all of the other drive configurations, although it exhibited a relatively erratic performance. The Seagate HDDs configured in iSCSI sat right below the CIFS Toshiba SSDs, but posted higher numbers than the CIFS Seagate drives. 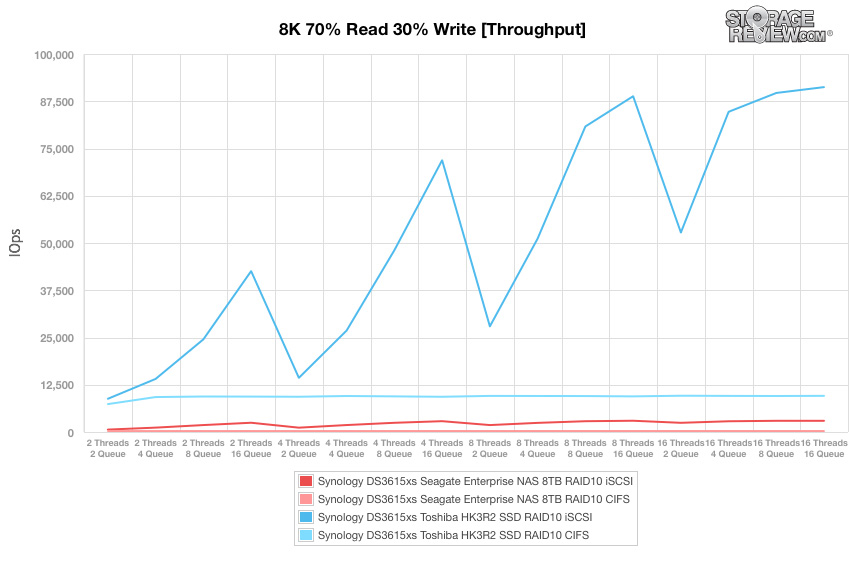 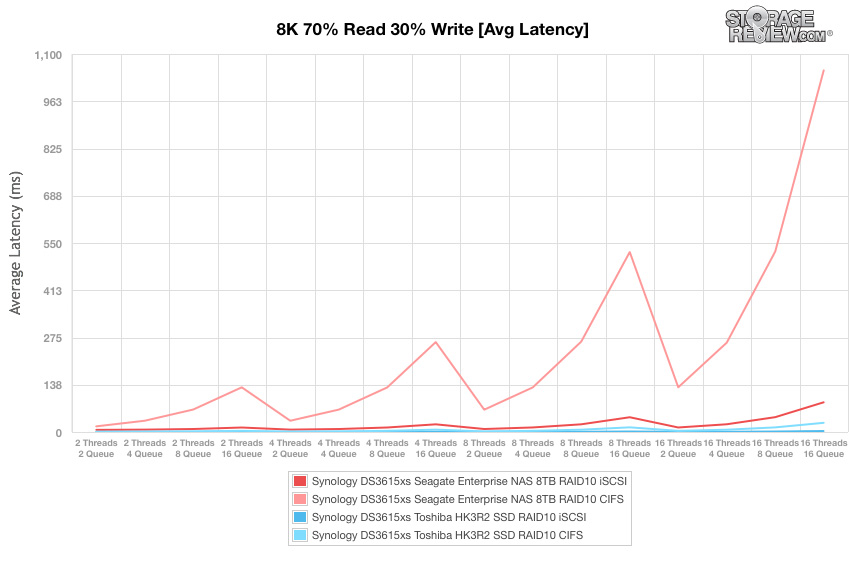 The standings were less clear in our max latency profile; performance differences between the two configurations were marginal. But as with most of our benchmarks, the Toshiba SSDs still handily outperformed the Seagate HDDs. 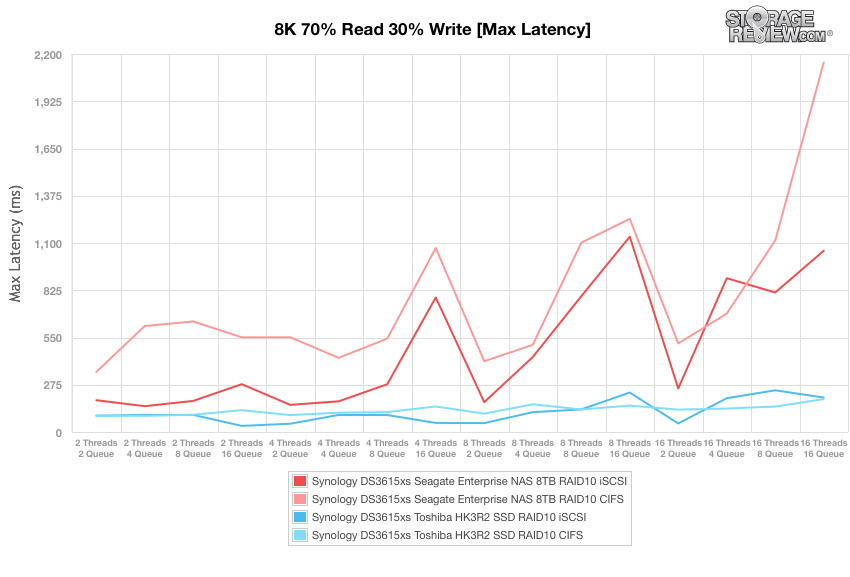 The standings were back to normal in our standard deviation benchmark, with a clear preference for iSCSI in both types of drives. This performance profile closely resembles that of our average latency benchmark. 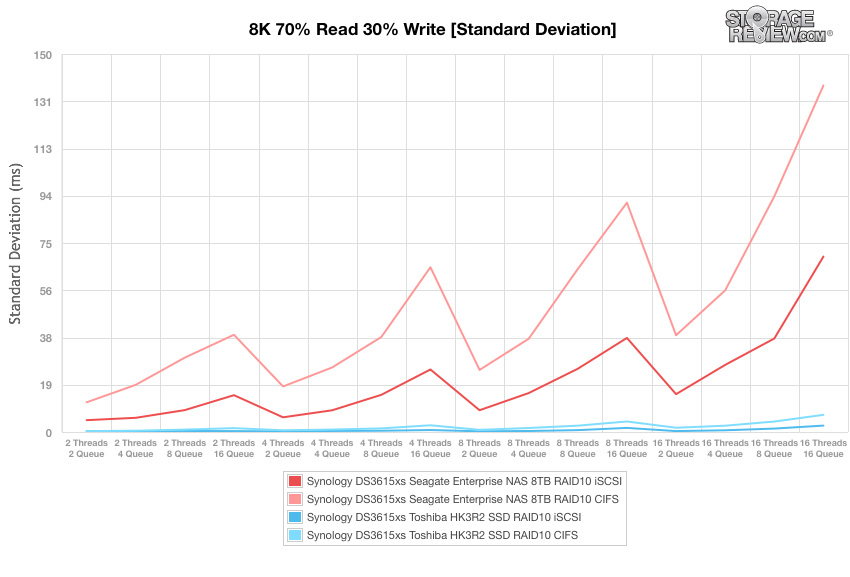 The final synthetic benchmark utilizes much larger 128k transfer sizes with 100% read and 100% write operations. The overall fastest configuration for this benchmark was the iSCSI Toshiba SSD, with 1,091,789KB/s read and 964,978KB/s write. The second-fastest in terms of read operations was the iSCSI Seagate HDD (983,320KB/s) and the second-fastest in terms of write operations was the CIFS Seagate HDD (730,067KB/s), both of which were around 10,000KB/s higher than the CIFS Toshiba SSD.

Synology’s DS3615xs was designed to be an all-inclusive NAS that can fit the needs of growing businesses. The DS3615xs is Synology’s top-of-the-line desktop NAS, providing users with their largest available raw capacity (288TB with two DX1215 expansion units) as well as the best hardware components that they offer (most notably a 3.4GHz CPU and up to 32GB of DDR3 ECC RAM) without moving to a rackmount system. Synology’s DSM connects users to their enterprise-grade storage solution through an intuitive interface, which helps business owners without an IT background get the most out of their server.

Based on our performance benchmarks, the DS3615xs is one of the top-performing desktop NASs on the market. In our Sysbench test hitting the DS3615xs with 8 MySQL databases, it gave us a combined throughput of 3,406 TPS, average latency of 75.4ms, and worst-case MySQL latency scenario (99th percentile latency) of 179.82ms. In our synthetic benchmarks we saw great results (using SSDs in iSCSI) in our 4K tests with throughput numbers as high as 105,667 IOPS read and 101,678 IOPS write and very low latency at 2.42ms read and 2.51ms write. Our 8K throughput was also impressive (once again using SSDs in iSCSI) with 94,958 IOPS read and 84,153 IOPS write. In our large block sequential tests the SSDs in iSCSI gave us transfer speed of 1.1GB/s read and 965MB/s write.

It is worth noting that the DS3615xs’s performance, as with any other NAS, is heavily dependent on drive selection. Users that are looking for a less-expensive (per GB), high-capacity server should use HDDs. A fully equipped DS3615xs, with two expansion units and 36 8TB HDDs total, would provide a maximum raw capacity of 288TB. For comparison, one could use SSDs to build a lightning-fast 12-drive tier with a much lower capacity (24TB if 2TB SSDs are used). In total though, the system provides a great deal of flexibility and performance thanks to the internals and 10GbE support.

Synology built the 12-bay DS3615xs with their highest-quality components, making it the largest and fastest DiskStation they offer. Its expandability and performance makes the DS3615xs one of the best NAS servers on the market in a tower form factor.