The Pogoplug Series 4 is the latest effort to bring the personal cloud to the masses in a simple, cost effect manner. Series 4 takes over the flagship position for Pogoplug, adding several features to the entry-level Pogoplug Mobile. Like the Mobile, Series 4 offers users remote access to their data stored on an SD card or USB device through all major web browsers and apps for the iOS and Android platforms. The big updates for the Series 4 though include USB 3.0 support as well as straight SATA support for docking a 2.5" hard drive or SSD in the unit.

The Pogoplug Series 4 is the latest effort to bring the personal cloud to the masses in a simple, cost effect manner. Series 4 takes over the flagship position for Pogoplug, adding several features to the entry-level Pogoplug Mobile. Like the Mobile, Series 4 offers users remote access to their data stored on an SD card or USB device through all major web browsers and apps for the iOS and Android platforms. The big updates for the Series 4 though include USB 3.0 support as well as straight SATA support for docking a 2.5" hard drive or SSD in the unit.

For those unfamiliar with the Pogoplug concept, the general idea is that the Pogoplug unit is connected via Ethernet port to the Internet, and the devices connected to it are easily accessible via app or browser from any other Internet connected device. The Pogoplug devices create their own tunnel for access, making them very easy to configure once you create a Pogoplug account. In the case of the Series 4, this means users can remotely access data on an SD card, three USB devices and a natively connected 2.5" SATA drive.

Pogoplug Series 4 is available in the US with an MSRP of $99.99, EU and UK support is expected soon. There are no service fees or other costs to use the Pogoplug service, though Pogoplug does offer hosted cloud services that are separate from what the Series 4 offers. 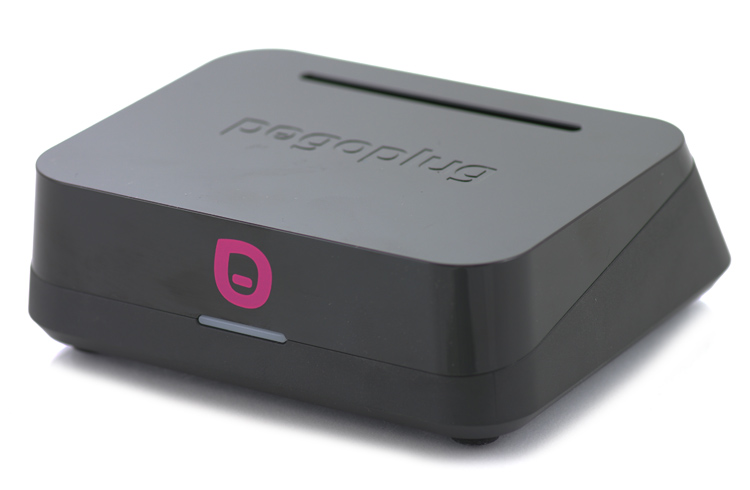 The Pogoplug Series 4 connects to the Internet via Gigabit Ethernet on the back of the unit, creating a tunnel for access anywhere in the world. Its mechanism for getting online means there’s almost not setup or configuration, just power on the device, connect the Ethernet cord and it’s up and running. All that’s left is creating an account with Pogoplug.

The Series 4 unit is rather small, not much bigger than some home theater media players such as a WD TV or Roku. The main design element is that it is very small and easy to hide away if needed or just sit on your desk without taking up a lot of space. The front has a red Pogoplug logo and access light. While it shares the same shape and footprint of the Mobile, the Pogoplug Series 4 has a few features hidden underneath the glossy black cover on top. With a bit of effort the cover pops off exposing a full 2.5-inch SATA connector and docking port for connecting a notebook-sized hard drive. It also exposes an additional USB 2.0 port for connecting thumbdrives to the top. 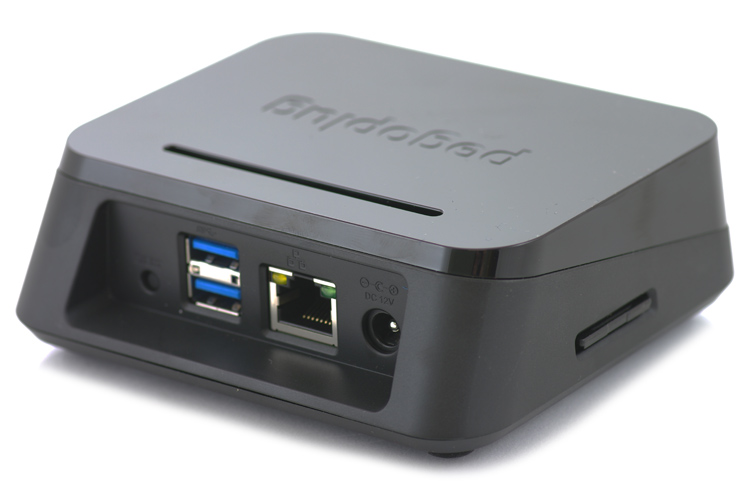 The hard drive connection is super simple for any user to install a hard drive, although the drive will wobble slightly when fully inserted. We tested both 9.5mm and 12.5mm 2.5-inch models inside the Pogoplug Series 4 without any issues. 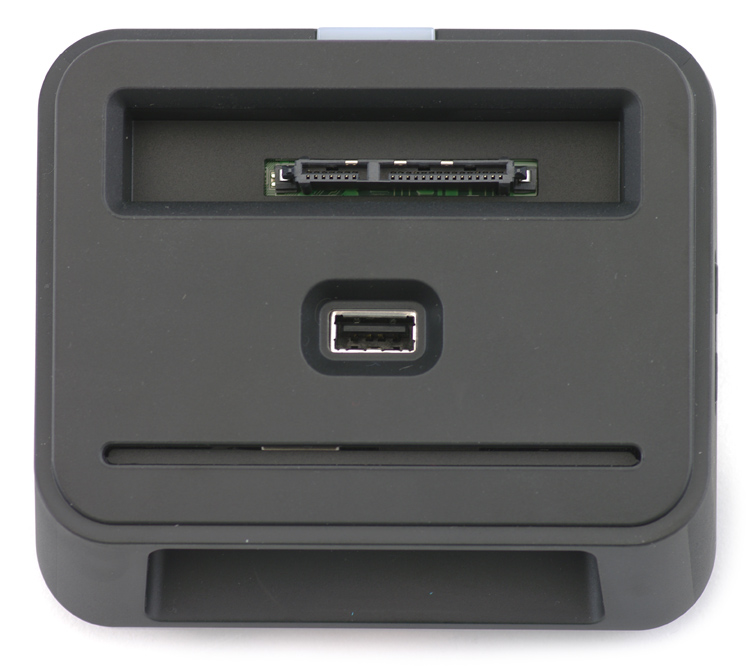 On the left side of the Series 4 there’s still a SD card slot, which when the card is inserted, sits flush with the side. The back houses the 1Gb Ethernet port, two USB 3.0 ports, power plug and reset pin… making this another one of the most simple NAS devices we have ever reviewed.

With the added connectivity options, we tested the Pogoplug Series 4 through the two fastest connection options over our office’s gigabit Ethernet network. This included a USB 3.0 connected hard drive consisting of a supplied Seagate 1TB FreeAgent GoFlex as well as a 500GB Hitachi Travelstar 7K500 notebook hard drive for the on-board SATA connection. 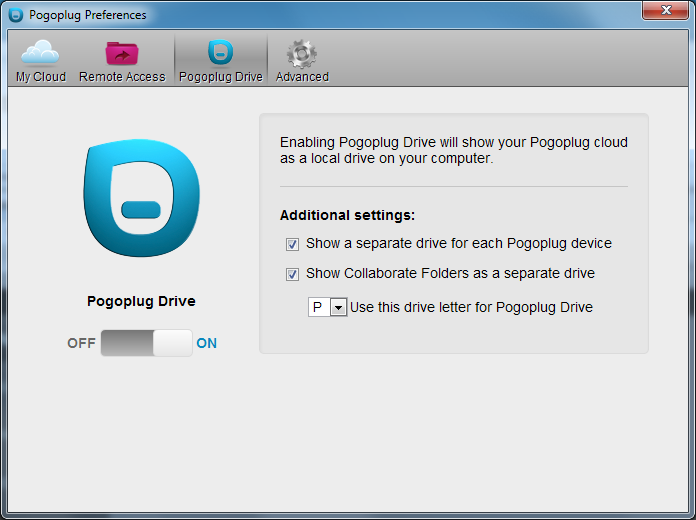 Overall the speeds were a modest improvement over the original Pogoplug Mobile, which was limited to USB 2.0 speeds topping at 30MB/s. While it won’t be breaking any speed records, it would be more than fast enough for sharing media around a household or quickly getting photos and video online to share with friends and family. 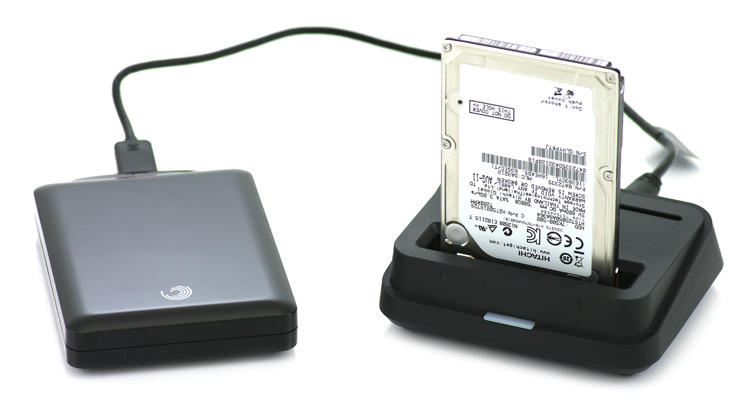 Pogoplug offers an iOS and Android interface, with gives a pretty basic interface with the device when you have it up and running. The main focus of the software is being able to stream media content, including music, images and video without much hassle. Below are screenshots from the app on an Apple iPhone 4S. 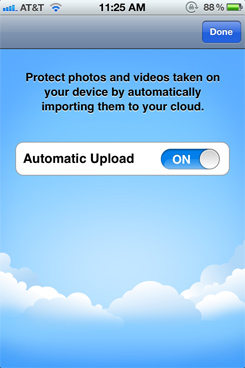 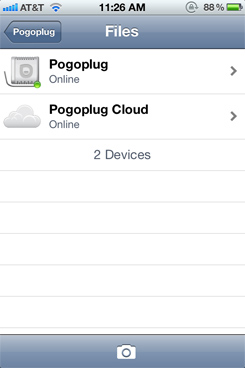 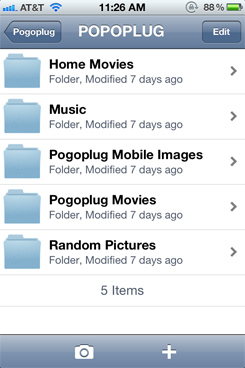 Another cool feature for those looking at ways to easily backup their pictures and videos to a private cloud, is an auto-upload feature inside the Pogoplug software. Similar to the iCloud software built into iOS 5, the Pogoplug client will automatically upload your images and movies to your Pogoplug back and home instead of Apple servers.

Pogoplug has historically delivered very simple to use devices; the Series 4 is no different. While more of a progressive update to the Mobile, the Series 4 offers USB 3.0 support as well as native SATA support for a single 2.5" hard drive or SSD. Those are in addition to the SD card slot, for a total of five directly connected content sources. For many, the faster connectivity options seals the deal, for everyone else, the Mobile is still a very good option.

The Pogoplug Series 4 is by no means a home office or small business NAS, but for home users the faster gigabit transfer speeds will help as they move large files between computers and the Pogoplug. Compared to the Pogoplug Mobile, the Series 4 adds roughly 10-12MB/s to the top sequential transfer speeds. This brings up the limit set from the USB 2.0 connection on the Mobile to a CPU-constrained 40-43MB/s speed over gigabit LAN on the Series 4. For users looking for a simple way to share media between a household of wirelessly connected devices and friends and family, the Pogoplug Series 4 offers nearly every connectivity option you could want.

The Series 4 also continues to be simple to configure and access content on just about any remote device including computers and Android and iOS devices. We had the Series 4 connected and interfacing through our Pogoplug account setup previously for the Mobile in about two minutes after unboxing it and plugging it into our office network. With auto-discovery through the internet and no ports to forward it is still one of the few devices you can just plug in and start using immediately.

The Pogoplug Series 4 offers class-leading simplicity for configuration and ease of use, giving consumers access to a variety of connected devices from SD cards, to USB drives and even a direct attached SATA hard drive or SSD. With no service fees and a variety of options to connect remotely, anyone looking for a low-cost personal cloud option should be looking at the line of Pogoplug solutions.