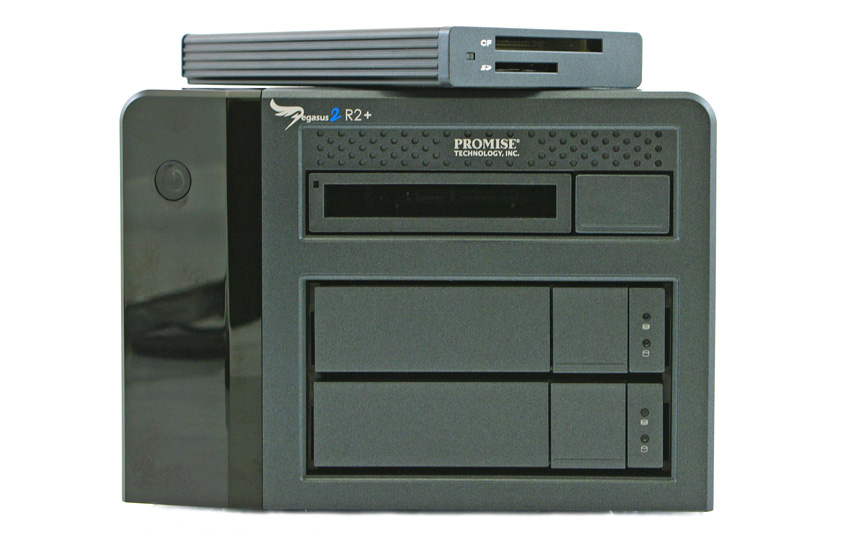 For added versatility, R2+ also provides users with several add-on ‘pod’ options including two SD/CF CardReaders (which are included) and both a 1TB HDD and a SSD reader pod, all of which come with USB 3.0 Micro-B for independent access. These certainly make the device quite flexible, as it gives media professionals access multiple different media formats. In addition, the DAS uses backwards compatible Thunderbolt 2 technology with two channels of 20Gb/s throughput in both directions simultaneously. It also supports up to six high-speed peripheral devices in daisy-chaining, which include external hard drives, video capture devices, and a Mini DisplayPort monitor.

The Pegasus2 R2+ is available for a street price of roughly $700. In our configuration, we populated the R2+ with 256GB Samsung 850 Pro SSDs though we did not use or test any of the pods.

At only 5.3 inches in height and roughly 10 inches in length, the Pegasus2 R2+ is a fairly compact device. Promise even goes as far as saying that it can be taken with you almost anywhere, though it’s certainly not as portable as an external hard drive. The look of the R2+ consists of a basic no-frills design, featuring an all-black plastic chassis with branding at the top portion of the device. The device itself feels very sturdy and will sit firmly where ever you place it due to the rubber pads underneath. 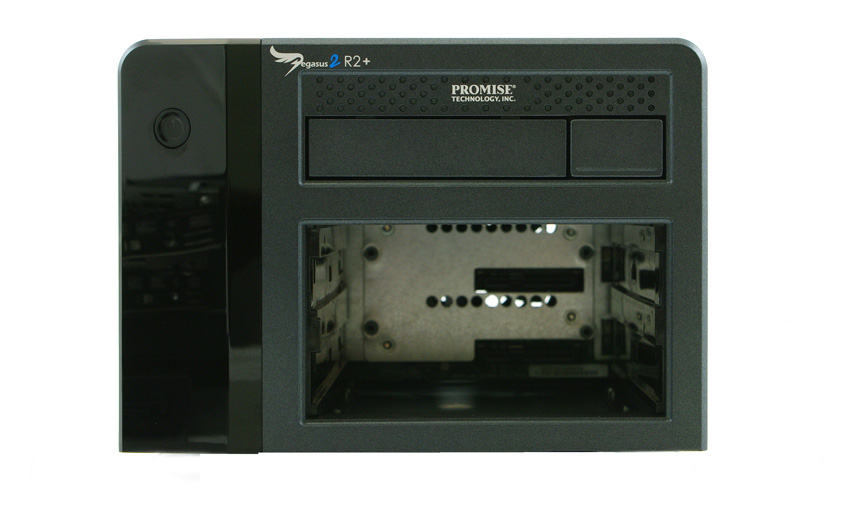 The front panel is equipped with a host functionality and status indicators, though it will differ slightly depending on the type of Media Pods that are inserted in the Media Bay. On the left side of the R2+ is the Power button (red indicates a serious problem such as RAID failure or failed hard disk drive) as well as the System Status, USB connection and Thunderbolt connection LEDs. 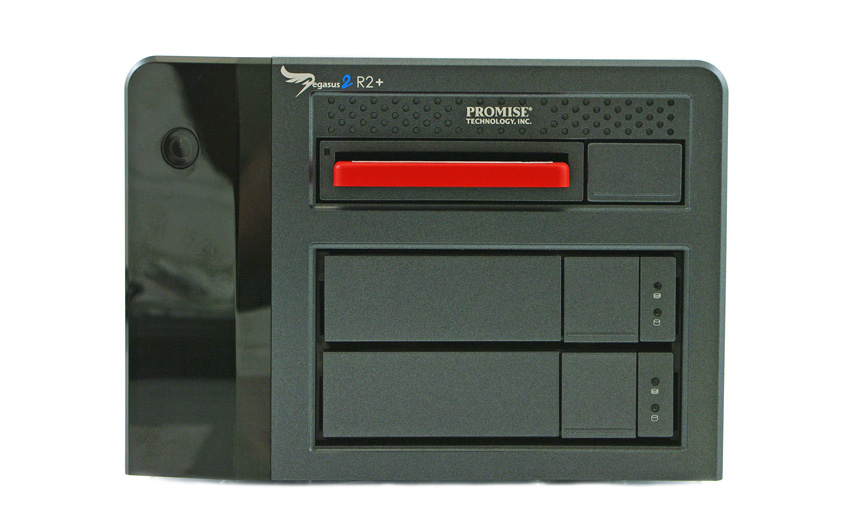 The drive carriers and media pods are located on the right of the front panel, which can be removed simply by pushing the eject button (the small horizontal line). Both hard disk drive carrier bays have a drive status and drive activity LED indicator, which gives useful information about the both drives. The Drive Status LED is blue when the disk tray is inserted, even if even if it isn’t populated with a drive. When red, there is likely a problem with the physical drive or an issue with the RAID configuration, while amber LED indicates the RAID is degraded somehow. 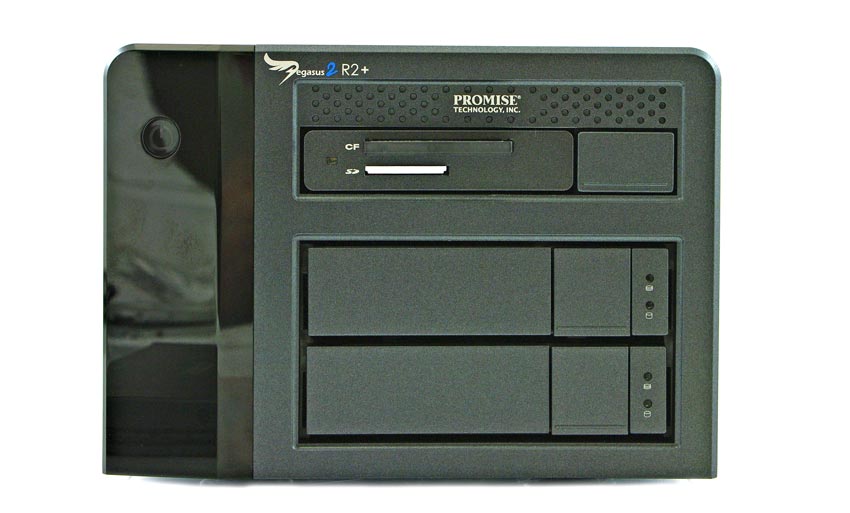 The ventilation for the system cooling fan takes up most of the back panel, showing that proper air flow is taken care of; however, the cooling fan is unfortunately not field-replaceable, so users need to contact technical support in the event of a failure. Also located on the back are the two Thunderbolt ports, a USB 3.0 port, and the power receptacle. 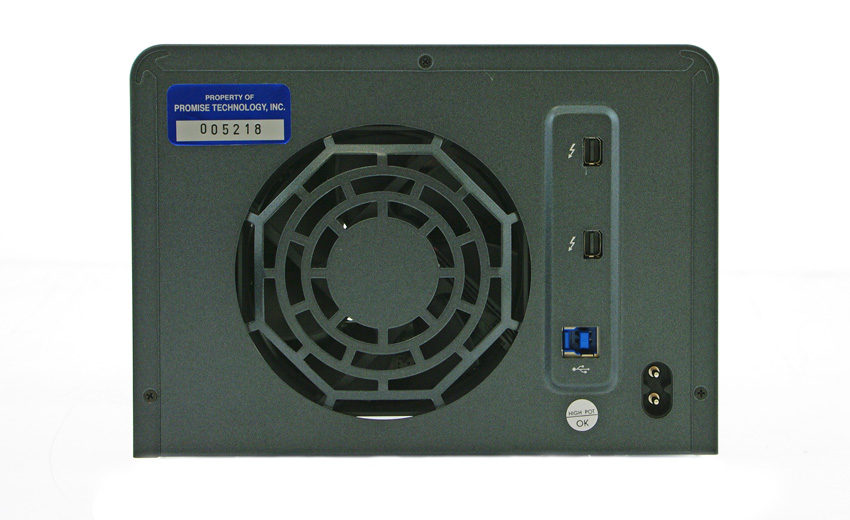 To test the performance of the Pegasus2 R2+, we measured transfer speeds in both RAID0 and single drive configurations using the Blackmagic Disk Speed Test with a 5GB test file connected to a current generation Thunderbolt 2 compatible MacBook Pro. We populated the R2+ with 2x 256GB Samsung 850 Pro SSDs.

In our single drive configuration, we measured reads and writes from the Pegasus2 R2+ with 261.1MB/s and 213.7MB/s, respectively. 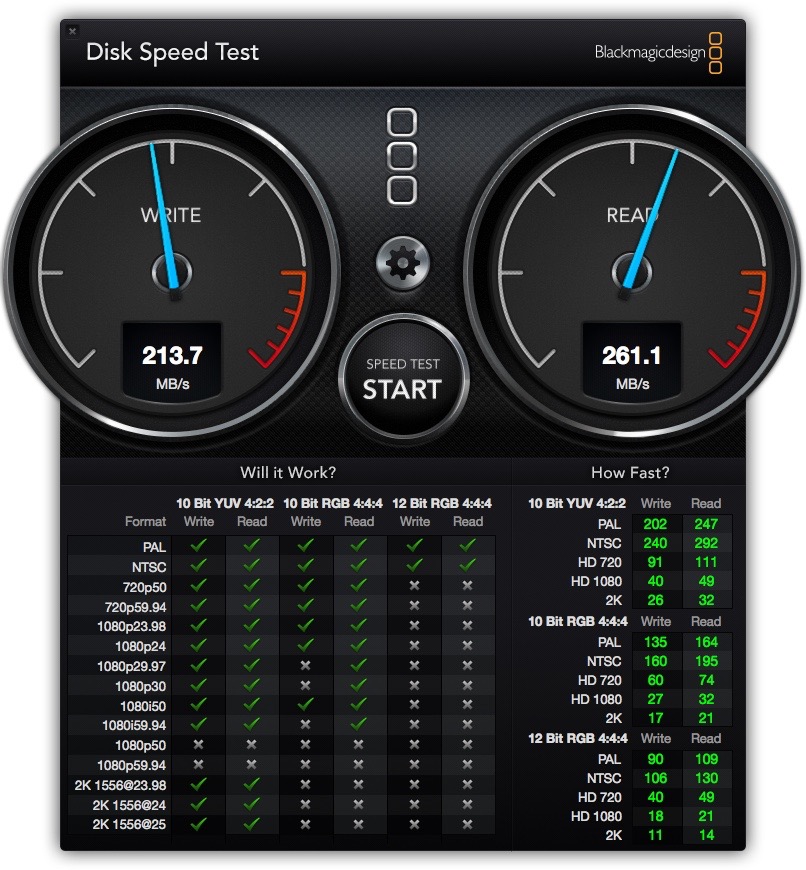 When configured in RAID0, the R2+ recorded 440.8MB/s in read activity and surprisingly just 217.0MB/s in write activity. 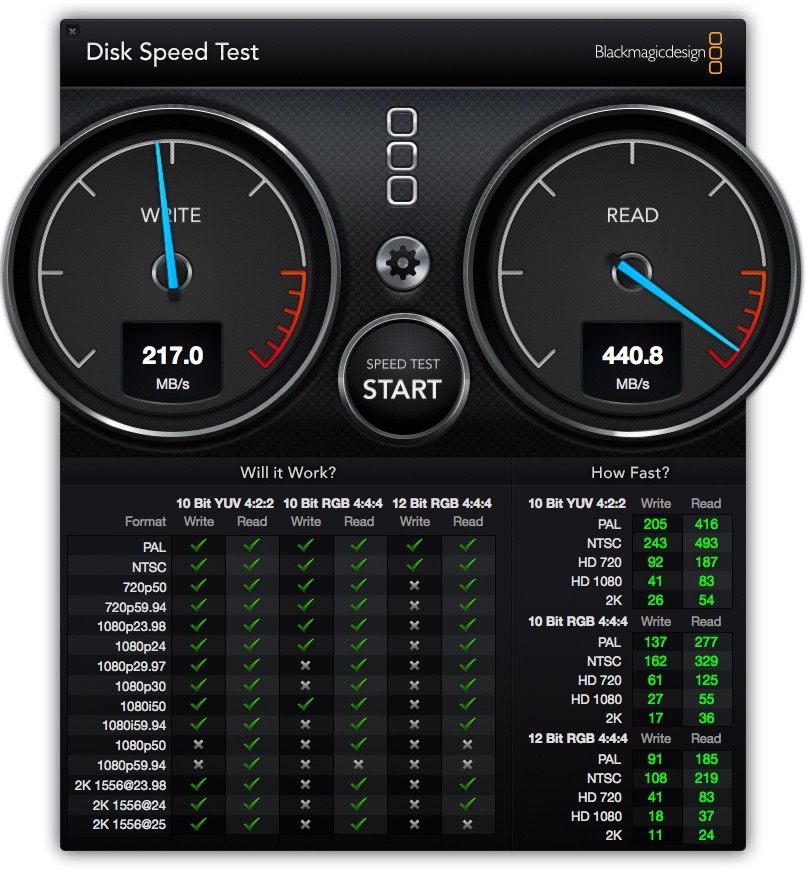 Catering towards smaller businesses, SOHO users, and media professionals, the 2-bay Pegasus2 R2+ Thunderbolt 2 DAS is PROMISE’s smallest DAS storage solution, though it packs a pretty big punch for its size. The R2+ is configurable in both RAID0 (spreading data evenly across two or more disks) and RAID1 (mirroring data on two disks) using hot-swappable technology. In addition, R2+ also comes equipped with add-on ‘pods’ that use a USB 3.0 Micro-B connection. These pods consist of a bundled SD/CF CardReader and both a 1TB HDD and a SSD reader pod, which are sold separately. This certainly adds to its flexibility.

To test its performance, we measured speeds from the Pegasus2 R2+ using a both single drive and RAID0 configuration populated with 256GB Samsung 850 Pro SSDs. For the former, the R2+ boasted 261.1MB/s read and 213.7MB/s write, while recording RAID0 read and writes of 440.8MB/s and 217.0MB/s, respectively. We aren’t too sure what the cause was poor write performance when configured in RAID0; however, reads were fairly impressive.

With the ability to support up to 6TB in raw storage, coupled with its decent overall performance, the PROMISE Pegasus2 R2+ is a worthy storage companion for media professionals and SOHO users that primarily use Thunderbolt 2-compatible Mac platforms.