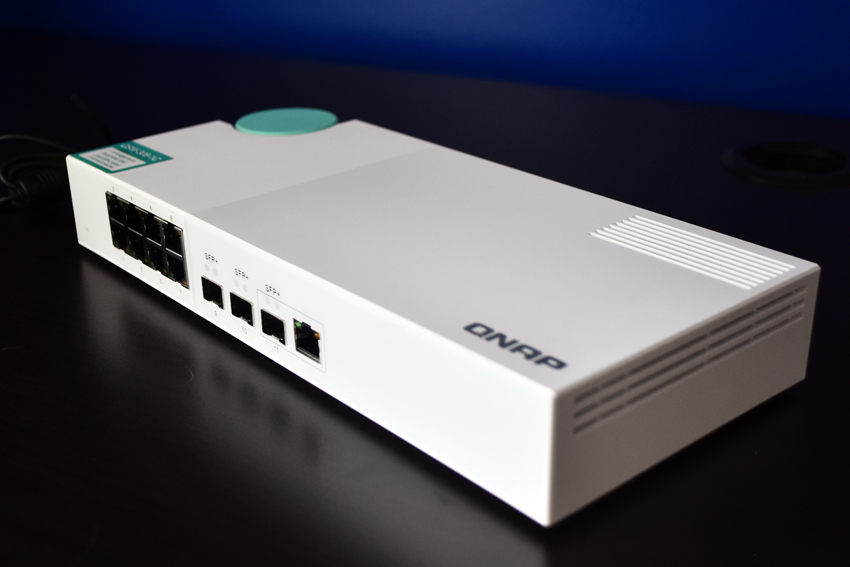 The little switch is compact and fanless, meaning it would be fine sitting on a desk and not causing much of an issue. The amount of ports provided can connect and speed up smaller offices and homes. The switch supports auto-negotiation for optimal speed as well as duplex detection for different devices. It comes unmanaged and these features help users rest easy knowing it needs no management. The switch can use existing cables for 10GbE and NBASE-T technologies (though the cable must be less than 45 meters and at a CAT 6e, 6A, or CAT 7).

The QNAP QSW-308-1C Unmanaged Switch comes with a two-year warranty and can be picked up for $160.

The QNAP QSW-308-1C is a small little switch that can easily be moved one-handed. The overall design in white with a green power supply that swivels around for easy powering. The front of the device has 8 1GbE (RJ45) ports, 3 x 10GbE SPF+ ports, and a 2.5/5/10GbE SFP+/RJ45 combo Port. There is a power indicator LED in the bottom left corner.

The top of the switch has QNAP Branding, ventilation, and a sticker with pertinent information on it. 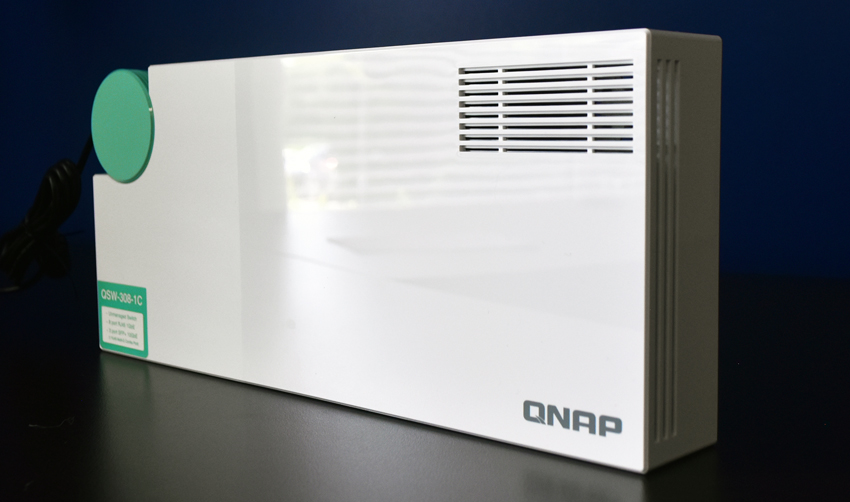 The rear of the device has the power connection on one side and some ventilation on the other.

Setup was as easy as plugging in power, plugging in networking and connecting devices. We ran a 10G uplink from our main switch to the QSW-308-1C. From there we did our normal NAS benchmarks (on a QNAP TS-453D with 4x Toshiba 480GB SSDs in RAID10) using both a single 1G port and a single 2.5G port to see the difference. This isn’t our full review of the QNAP TS-453D, that will be coming down the pipeline shortly.

With 4K average latency we saw similar improvements in iSCSI seeing reads go from 8.99ms with 1G to 3.76ms with 2.5G.

The QNAP QSW-308-1C Unmanaged Switch is an easy way to add higher connectivity to a small or home office. The switch is compact and quiet and can be placed anywhere near devices that need to be connected. The switch comes with eleven ports and up to 5 speeds. It can work with CAT5e/CAT6 and SFP+ cables. QNAP sells several other adapters and expansion cards so users can hook up most of their existing equipment that is ready for higher speeds. No management is needed as the switch auto-detects speeds and negotiates what is needed. It comes right out of the box ready to work and increase networking speed.

The biggest benefit to the QNAP QSW-308-1C Unmanaged Switch is adding faster networking speeds. Particularly here is QNAP’s push to add more device with 2.5GbE connection such as their TS-453D NAS. The switch didn’t add higher performance across the board but there were several areas where we saw a jump in performance in several cases over 2x that of the 1GbE. For instance, we saw 4K throughput for read jump over 38K IOPS in iSCSI. Average latency 4K reads for iSCSI dropped over half from about 9ms to less than 4ms. And our 128K large block sequential benchmark saw speeds jump over double in both configurations and read and writes.