The Seagate FireCuda 120 is purpose-built SSD for the gaming demographic, focusing on endurance and capacity. The FireCuda family also comes in two NVMe M.2 models, the FireCuda 510 and 520, the latter which leverages the new PCIe 4.0 interface.

The Seagate FireCuda 120 is purpose-built SSD for the gaming demographic, focusing on endurance and capacity. The FireCuda family also comes in two NVMe M.2 models, the FireCuda 510 and 520, the latter which leverages the new PCIe 4.0 interface. 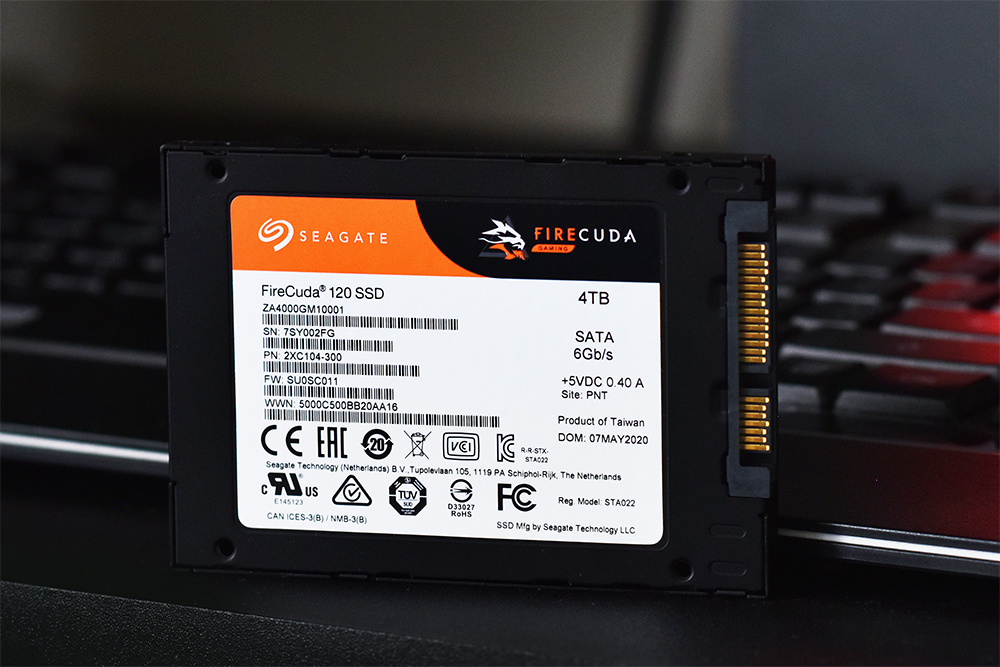 The FireCuda 120 SSD is the 2.5-inch SATA model of the bunch and features performance specs we usually see with 6Gb/s SSDs. AS such, it is quoted to deliver sequential speeds up to 560MB/s read and 540MB/s write, while random speeds are slated to deliver 100,000 IOPS read and 90,000 IOPS write for all capacities. 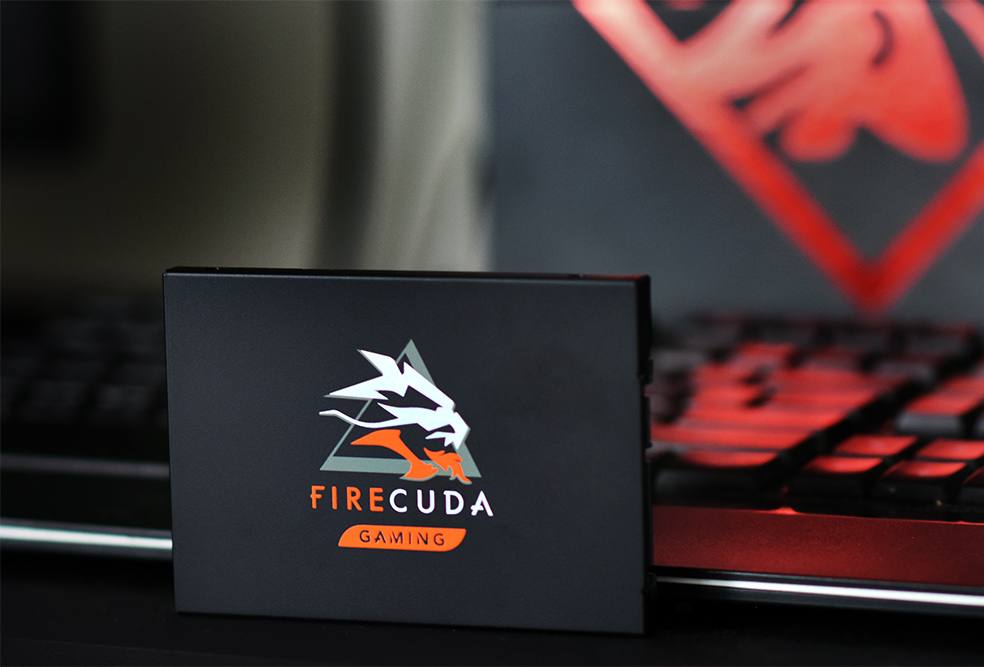 For reliability, the FireCuda 120 is quoted at the usual 1.8M hours MTBF , though its Total Bytes Written is speced at a maximum of 5600TB, which is a noticeably higher than we usually see for consumer-grade drives such as these (thanks in large part to the 4TB capacity). The Seagate FireCuda 120 line also supports the company’s SeaTools SSD. This is the company’s handy drive-management software that offers a range of useful tools such as drive health monitoring, drive performance monitoring, and firmware and software updates.

The Seagate FireCuda 120 SSD is backed by a 5-year warranty and comes in 500GB, 1TB, 2TB and 4TB capacities (the smallest model can be picked up for roughly $100). For this review, we will be looking at the 4TB.

With random 4K write, FireCuda held the top spot with a peak score of at 64,013 IOPS with a latency of 2007µs, slightly better than the OWC drive.

Switching over to sequential workloads, the FireCuda placed first in 64K read (again, slightly better than the OWC drive) with a peak performance of 7,602 IOPS or 473MB/s at a latency of 2,101µs

Our 64K write test saw the FireCuda recoding identical speeds to the OWC, though it was ever so slightly being edged out in transfer speed at the very end of the test. The FireCuda peaked at 6,644 IOPS (or 416MB/s) at a latency of 2,382ms vs. 417MB/s and 2,385ms for the OWC drive.

Next, we looked at our VDI benchmarks, which are designed to tax the drives even further. These tests include Boot, Initial Login, and Monday Login. Looking at the Boot test, the Seagate FireCuda 120 SSD showed some serious spikes in performance near the latter part of the test as IOPS ramped up. It ended up peaking at 28,781 IOPS with 1,182µs.

VDI Initial Login, the FireCuda showed big spikes in latency and IOPS, peaking of 10,333 IOPS with a latency of 2,453µs before taking its last hit at the very end.

Finally, VDI Monday Login saw the FireCuda with uneven performance (the only two stable drives were the OWC and Samsung) with a peak score of 9,294 IOPS at a latency of 1,380µs before dropping off again

The Seagate FireCuda 120 is a 2.5-inch SATA consumer-grade SSD catered towards gamers looking to upgrade their HDD-based system. The Seagate drive comes in range of capacities, including a generous 4TB model, and is quoted to deliver sequential speeds up to 560MB/s read and 540MB/s write. It is also speced with the standard 1.8M hours MTBF and an impressive maximum TBW of 5,600TB for the largest capacity model. 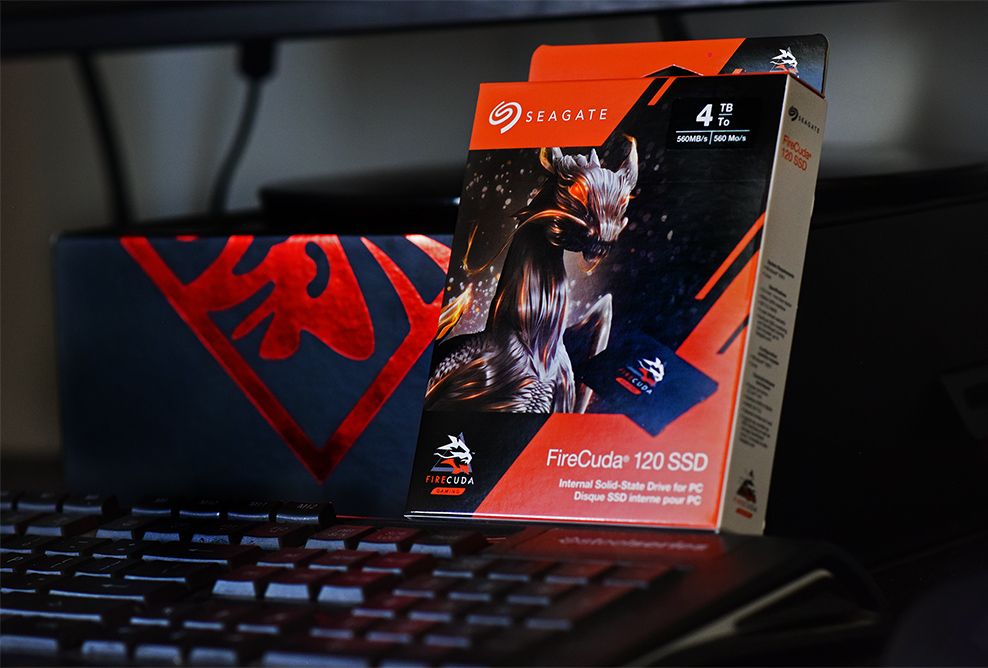 For performance, we compared the FireCuda to a range of similarly-classed client 2.5-inch SATA SSDs. In our 4K and sequential tests, the FireCuda took the top spot throughout (with the exception of the sequential writes where it was just a hair below the OWC), though it didn’t quite reach Seagate’s quoted numbers indicated above. Nonetheless, our VDBench the highlights include 80,233 IOPS for 4K read, 64,013 IOPS IOPS for 4K write, 473MB/s read in 64K, and 416MB/s write in 64K. In our VDI benchmarks, results were much more uneven, as we recorded some serious spikes during the later parts of the tests. As such, it showed peaks of 28,781 IOPS in boot, 10,333 IOPS in initial login, and 9,294 IOPS in Monday login.

That said, the FireCuda 120 is solid release by Seagate with price tag roughly the same as other SSD in its class. For example, the 2TB goes for $340 while the 4TB is currently $620, both of which are on par with the Samsung 860 EVO pricing. With a high TBW, good overall performance, and slick branding (which can be important to prosumers), the Seagate FireCuda 120 is a great choice for gamers or simply those looking for a high-capacity SATA SSD.