The QNAP TS-131K single-bay NAS is compact, sporting a quad-core Alpine AL214 ARM Cortex A15 CPU and 1GB RAM. Personally, I typically glaze over one bay NAS enclosures as single-bay solutions offer absolutely no data redundancy. However, with the low cost ($165 in Feb 2021 for the bare NAS) this upgrade to the TS-131 doubles the system RAM (512MB to 1GB) and by doing so enables many QTS applications that would have been difficult to run otherwise.

The QNAP TS-131K single-bay NAS is compact, sporting a quad-core Alpine AL214 ARM Cortex A15 CPU and 1GB RAM. Personally, I typically glaze over one bay NAS enclosures as single-bay solutions offer absolutely no data redundancy. However, with the low cost ($165 in Feb 2021 for the bare NAS) this upgrade to the TS-131 doubles the system RAM (512MB to 1GB) and by doing so enables many QTS applications that would have been difficult to run otherwise. 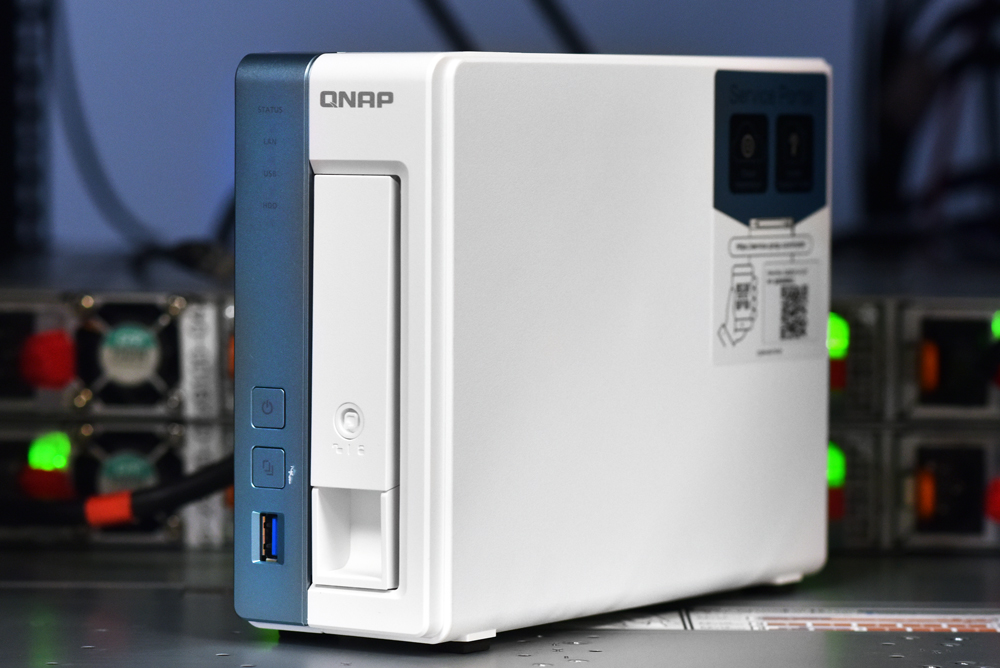 This little gem has found an absolutely fantastic use case for the business that may have several people “working from home”. Security camera (NVR capability) through Surveillance Station makes adds value’ and Yes, you can even run a media server locally. And then there’s the cloud.

Users looking at the performance of a single bay NAS probably aren’t expecting huge numbers, but when filled with a single SSD we were excited to find out the little TS-131K was able to handle itself quite well. From a bandwidth perspective, you are still limited to whatever can come across a single 1GbE connection, but throughput for small-block I/O has a lot of headroom.

Being a single-bay NAS, the QNAP TS-131K is quite compact. The NAS has a minimalist design with white and blue colors. The front has access to the drive bay, the power button, a USB 3.2 port, and the USB auto copy button along with indicator LEDs near the top. 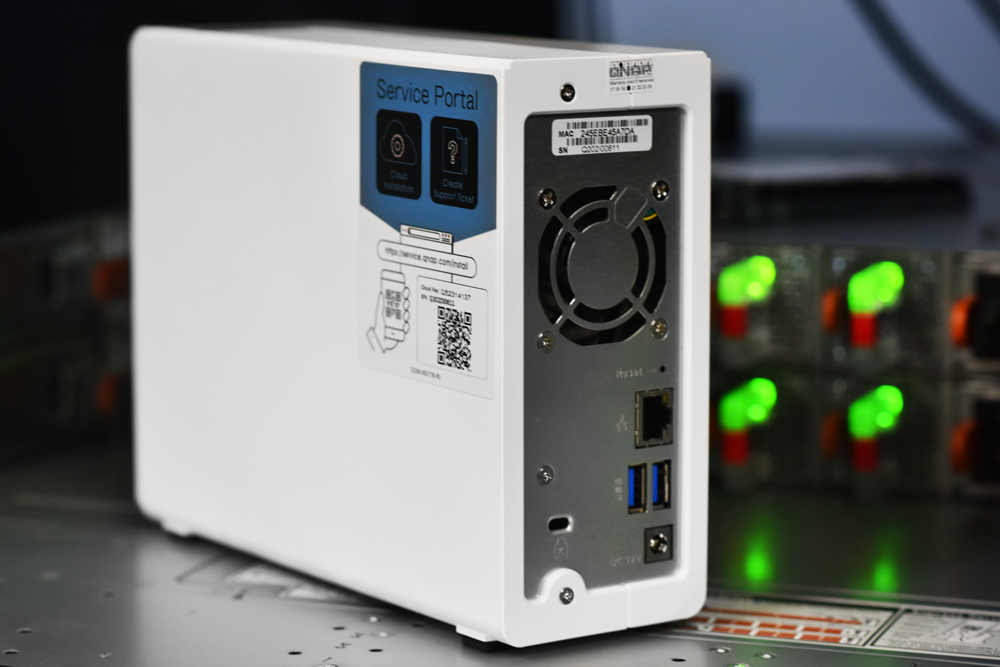 The Rear of the device sees the fan take up the top half. The bottom half has the LAN port, two more USB 3.2 ports, a reset button, Kensington Slot, and a power port. 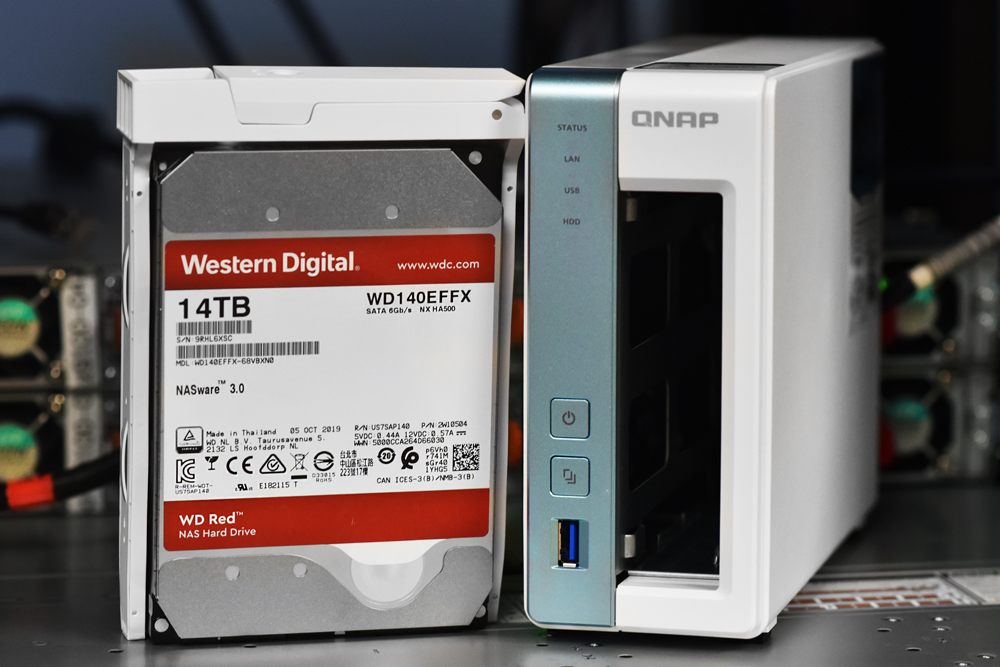 In our testing using two SMB shares to our 1TB WD Red SSD (despite the photo above), we found large-block sequential performance in our 128K transfer test measuring 115MB/s read and 115MB/s write. Keeping the sequential pattern but lowering to an 8K block-size we measured 8,343 IOPS read and 7,792 IOPS write. These are fairly respectable numbers considering the budget-oriented CPU.

Switching to a random workload with a 4K transfer size, we measured 7,613 IOPS read and 7,153 IOPS write. Again, we’ve seen bigger numbers, but for a single-bay platform, this was pretty good.

A one-bay NAS of this nature isn’t about performance though, it’s the additional apps that make this worthy of consideration. Hybridmount easily allows cloud services and remote volumes to be mounted and shared locally.

After installing Hybridmount, all you need to do in order to set up local replication is add the account and open the share.

Hybrid mount comes with licenses for 2 “Cloud Services” (Additional licenses can be purchased from the QNAP store). 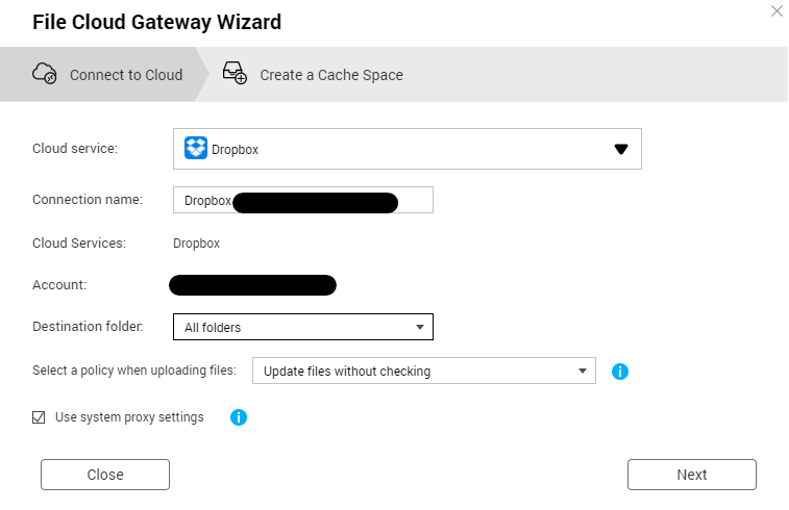 You will be asked where you wish to locate the cache – It is literally set it and forget it.

Once the mount is complete, it will appear in File Station –

This is great as if you are setting up file access for a home office or a branch office, you can setup shares to the cloud volume and this allows you to “Cache” commonly used files locally and eliminate most of the latency that comes from sharing files to the cloud.

QNAPs myQNAPcloud service allows for remote access into the NAS (Free) – allowing you to set up web shares and do a remote backup with the NAS as the target. Further, this is just one application, there are many others that can make a single-bay NAS more extensible than most people realize.

While not lightning in a bottle due to gigabit ethernet speeds and limited RAM (1GB) – the QNAP TS-131K can be upgraded with QNAPs new 5Gb USB adapter (QNA-UC5G1T) if speed is found to be a bottleneck. Pairing this with a SATA SSD makes for a great network share and basic backup box on a budget. With three USB 3.2 (Gen 1), this NAS supports QNAPs expansion with the TR-002 or TR-004 – or any USB HDD.

Single-bay NAS can be a bit of a head-scratcher as to how to best leverage. However, as one can see from the above, the QNAP TS-131K lends itself to a few good use cases with a pretty low initial investment.