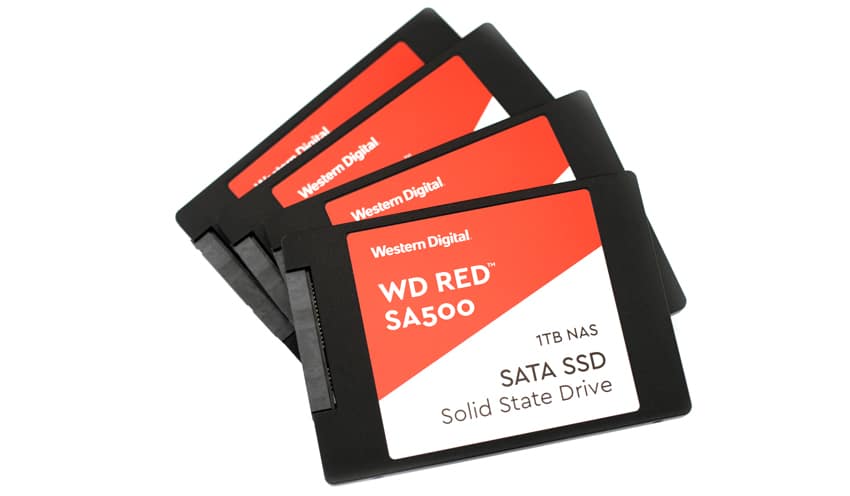 Looking at the purpose-built design WD designed this drive utilizing the SATA standard as opposed to NVMe PCIe due to the fact that most CPUs and controllers that are in use in the majority of the NAS industry are SATA based. Meaning most NAS CPUs and controllers can’t physically or technically take advantage of NVMe, leading WD to purpose-build a SATA SSD for the NAS market. Looking at form factor this drive offers two options, a standard 2.5” drive with a 7mm z-height and M.2 2280. With these form factors, the WD Red NAS SSD will fit in most modern NAS slots.

The WD Red SA500 SSD comes with a five-year warranty. It can be picked up for as little as $83 for the 500GB up to $560 for the 4TB at the time of this review. For this review we will be looking at the 1TB capacity.

In this review, we take a bit of a different approach in our testing. For the WD Red AS500 SSDs, we use our QNAP TS-1685 NAS for testing and comparing the data to the Seagate IronWolf 110 240GB.  We will be looking at 4 samples of the WD Red SA500 SSDs, which we configured in RAID5. We use our Dell PowerEdge R730 with a Windows S2012 R2 VM as a load generator. In addition we will also be looking at each drive individually inside our Dell EMC PowerEdge R740xd Test Platform, where we look at synthetic performance utilizing VDbench.

In 4K average latency, the WD Red had the same placement against the Seagate as above. In read performance the WD hit 4.45ms in CIFS and 972µs in iSCSI. For write, it hit 8.97ms CIFS and 9.01ms iSCSI.

The next benchmark tests the drives under 100% read/write activity, but this time at 8K sequential throughput. Here the WD Red did better in CIFS read (62,926 IOPS) and better in write performance for both configurations, 43,644 IOPS in CIFS and 130,224 IOPS in iSCSI. For iSCSI read the WD Red was just behind the Seagate with 223,121 IOPS.

Our next test shifts focus from a pure 8K sequential 100% read/write scenario to a mixed 8K 70/30 workload, where we will show how performance scales in a setting from 2T/2Q up to 16T/16Q. The WD Red had a slight advantage in CIFS starting at 16,955 IOPS and staying ahead of the Seagate throughout ending at 26,777 IOPS. The reverse was the case in iSCSI as the Seagate was able to stay on top the whole time though the WD Red finished at 41,593 IOPS. 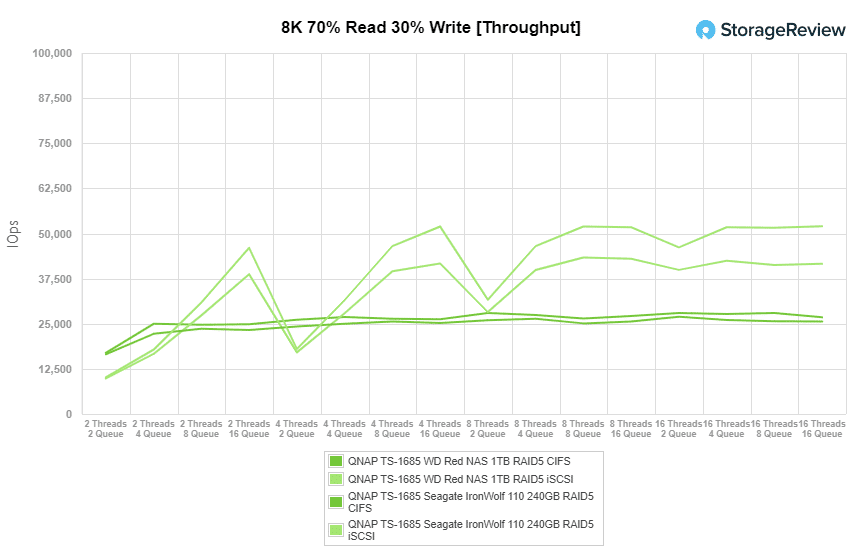 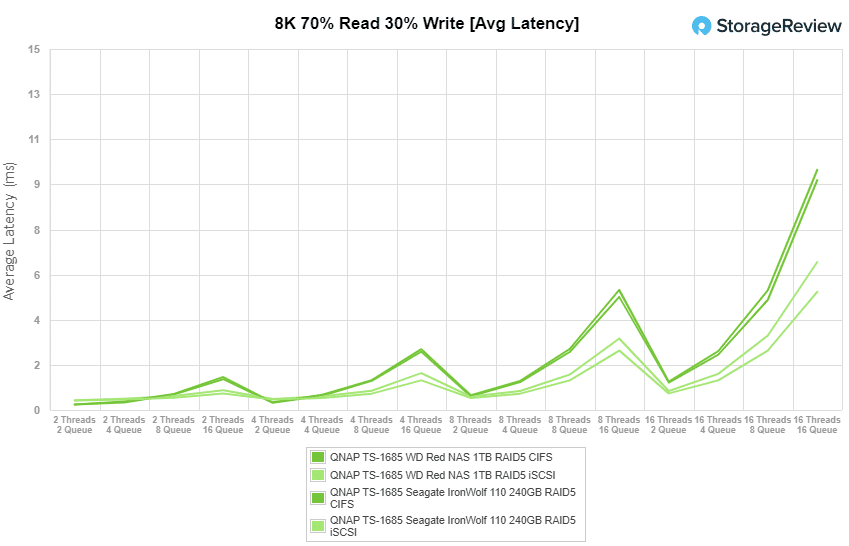 In maximum latency, the WD Red once again fell behind the Seagate. The WD finished with 28.8ms in CIFS and 133.38ms in iSCSI. 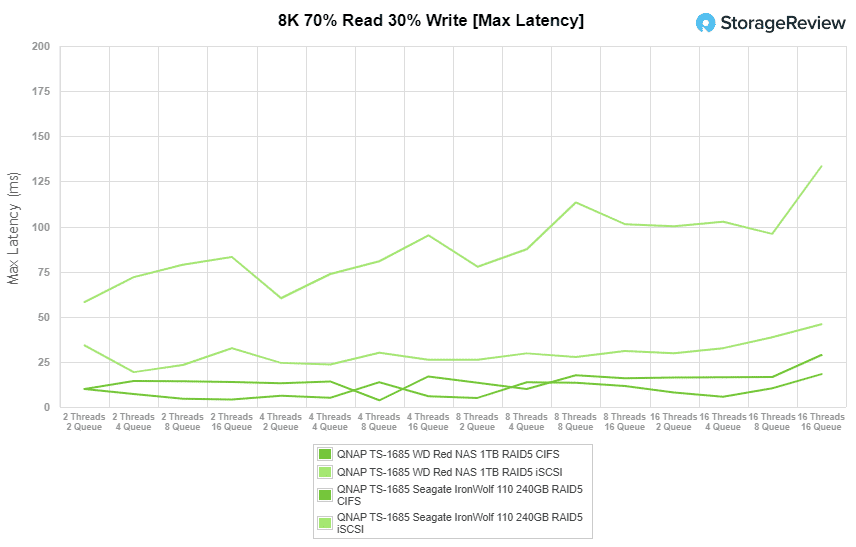 Standard deviation for 8K 70/30 showed the same placement as Max Latency with the WD Red finishing with 1.12ms in CIS and 9.47ms in iSCSI. 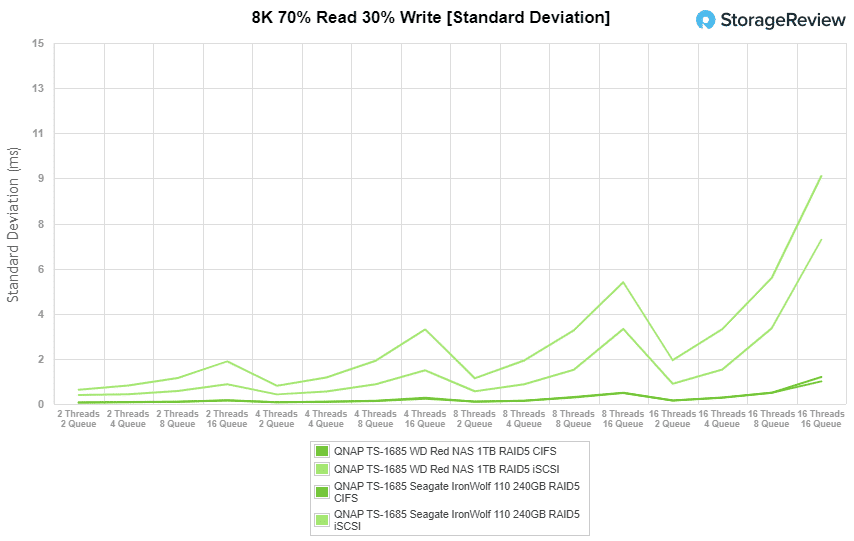 While the new WD Red SSD is designed for NAS environments we also wanted to see how it would do in our normal barrage of SSD testing. Here we leveraged bare metal VDBench and compared the drive to the Seagate IronWolf 110, both 240GB and 3.84TB versions.

In random 4K read performance the WD surpassed the other two drives to take the top spot with a peak performance of about 73K IOPS at 1.4ms before dropping off slightly.

4K random write showed the opposite with the WD placing last with a peak performance of 37,920 IOPS at a latency of 3.37ms.

Looking at sequential workloads, again the WD Red was the top read performer with 7,408 IOPS or 463MB/s at a latency of 2.2ms.

64K write had the WD Red in the middle with a peak performance of 5,081 IOPS or 318MB/s at 3.2ms latency before dropping off some.

As NAS devices are becoming more and more prevalent in SOHO and SMBs, users are looking for ways to leverage them but adding a nice performance bump. Those NAS devices that support SSD tiering or caching will benefit from SSDs designed for NAS usage such as the WD Red AS500. The drive comes in two form factors (M.2 and 2.5”) and capacities up to 4TB. The Red SSD promises the endurance needed for 24/7 NAS use, according to WD, while also providing a performance bump over HDDs. 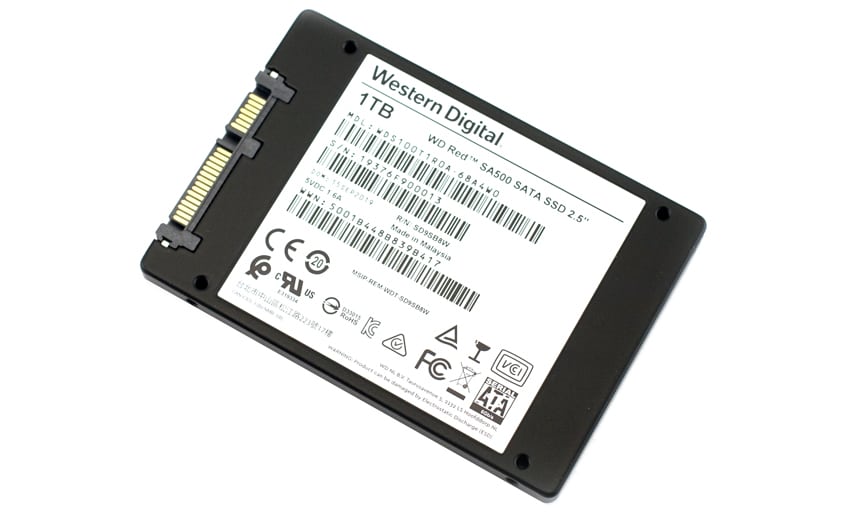 For performance we tested the WD Red SA500’s in both a NAS device and a server as a stand-alone SSD to give a well-rounded picture of its performance. In the NAS, the SA500 did tend to have better read performance compared to the Seagate IronWolf 110 (another popular SATA SSD marketed for NAS usage). The Seagate tended to perform better in writes. Highlights Of the Reds include 4K random throughput of 263K IOPS read in iSCSI and 28K IOPS write in both configurations. 4K latency saw 972µs read in iSCSI and 8.97ms write in CIFS for average with max latency being 43.57ms read in CIFS and 78.47ms in iSCSI. Standard deviation saw an uptick in comparative performance with the SA500 having 1.13ms read in iSCSI and 6.17ms write in CIFS. For 100% read/write 8K throughput the SA500 hit 223K IPS read and 130K IOPS write both in in iSCSI. For large block sequential the SA500 was able to hit highs of 2.31GB/s read in CIFS and 1.87GB/s write in iSCSI.

The WD Red SA500 SSD is a cost-effective method for boosting performance in a NAS device either as a flash volume or in front of hard drives as a cache/tier. Comparatively, the WD Red SSD has better read performance than the Seagate, which will most likely work well for the intended use cases. To be fair though, the Seagate drive has roughly 3X the endurance rating for their drive (~.96 DWPD in the 1TB). WD is betting however that they have enough endurnace (~.33 DWPD in the 1TB) and that consumers will prefer the lower cost of the WD and the lean toward read performance. Ultimately understanding your use case and workload needs will be important here as the balance of endurance, performance and cost is very different between the two leading contenders.