The QNAP TS-251D is an entry-level 2-bay NAS  that targets home users looking to set up a multimedia entertainment solution (4K media transcoding and streaming) and those who just need a device to secure their data via their own personal cloud. Released back in January, the QNAP NAS comes in two models: TS-251D-4G and TS-251D-2G. Though the 2G ships with 2GB of RAM and the 4G with 4GB, they both can be expanded to a maximum of 8GB using the two DIMM slots.

The QNAP TS-251D is an entry-level 2-bay NAS  that targets home users looking to set up a multimedia entertainment solution (4K media transcoding and streaming) and those who just need a device to secure their data via their own personal cloud. Released back in January, the QNAP NAS comes in two models: TS-251D-4G and TS-251D-2G. Though the 2G ships with 2GB of RAM and the 4G with 4GB, they both can be expanded to a maximum of 8GB using the two DIMM slots. 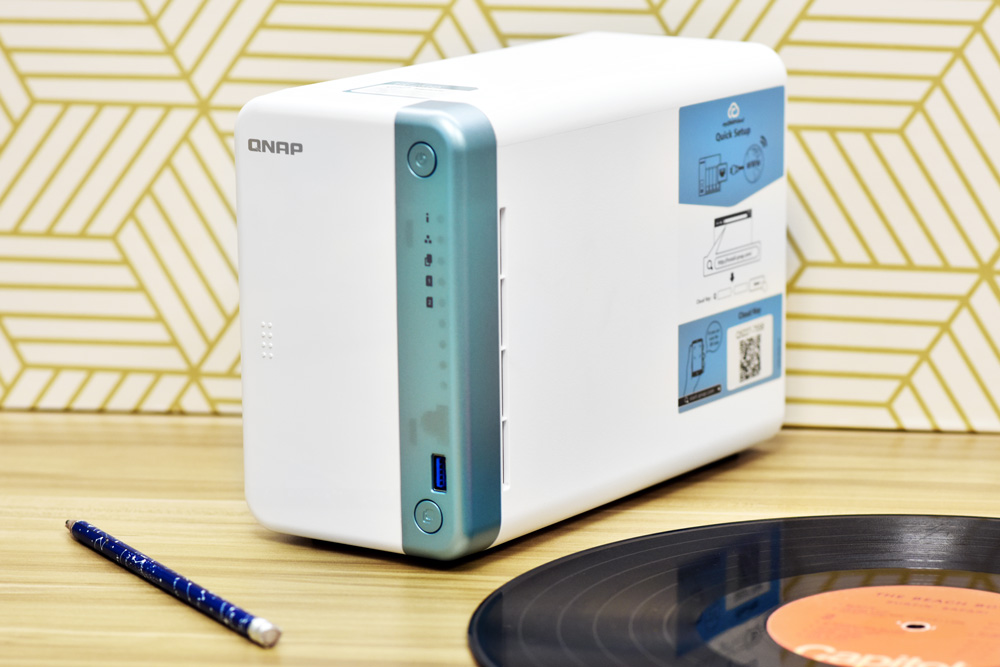 Overall, the TS-251D is another familiar release from QNAP (which is a good thing), with specs and features you normally find with their consumer-grade NAS solutions. As such, it comes with an Intel Celeron J4005 dual-core 2.0GHz processor (with burst up to 2.7 GHz), up to 8GB of DDR4 RAM as we mentioned above, one 1-Gigabit LAN port, and supports both 2.5/3.5-inch HDDs and SSDs. It also comes equipped with two USB 3.0 ports, three USB 2.0 ports, an HDMI port, and a GbE RJ45 Ethernet port. It also comes with QNAP’s USB One Touch Copy button, which copies data from a USB device to the NAS and vice versa.

The PCIe expansion is the most important component of the NAS, as it allows users to add some flexibility to to the NAS and expand of its functionality. With it, users can add a QNAP QXG – 10GbE/5GbE network expansion card for a high-speed network environment; an M.2 SSD for caching; a compatible wireless adapter; or a USB 3.1 Gen 2 (10Gbps) card for speedy file transmission. 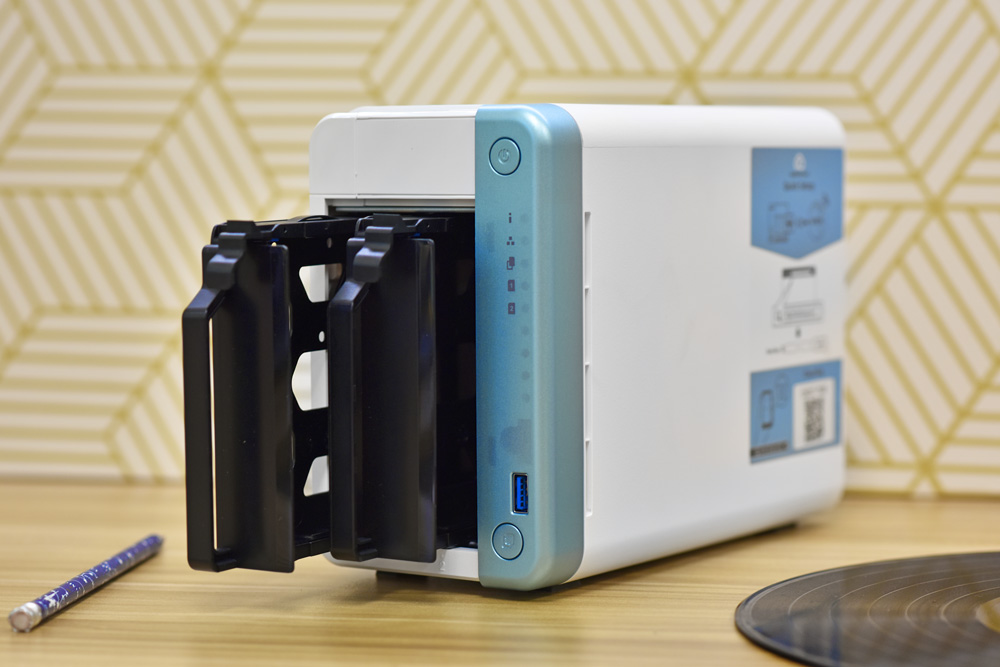 Like all QNAP devices, the TS-251D also features Intel AES-NI 256 hardware-accelerated encryption and snapshot support, the latter which allows for quick recovery of data when files accidentally get deleted, modified or altered due to a ransomware attack. Moreover, QuMagie, the company’s smart AI photo management application, groups similar photos together in albums using the technology’s integrated AI image recognition. This is certainly ideal for those who will be using the TS-251D as a file management system for all their media.

The TS-251D features a really nice design with its teal and white color scheme, which is quite different than the all-black and less rounded TS-251+ model. It uses a plastic enclosure, which is common for consumer-grade NAS solutions, and will sit firmly on a desk next a workstation. 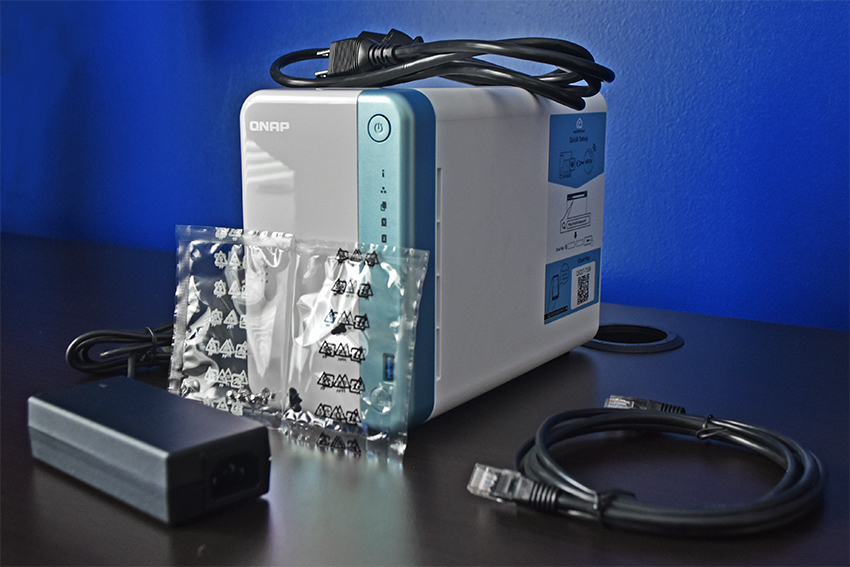 On the front panel is the power button at the top right, with the status, LAN, USB One Touch Copy, and drive LEDs just below. At the bottom right is the USB One Touch Copy button USB 3.0 port and button, which allows users to easily transfer data two and from the NAS and USB device. 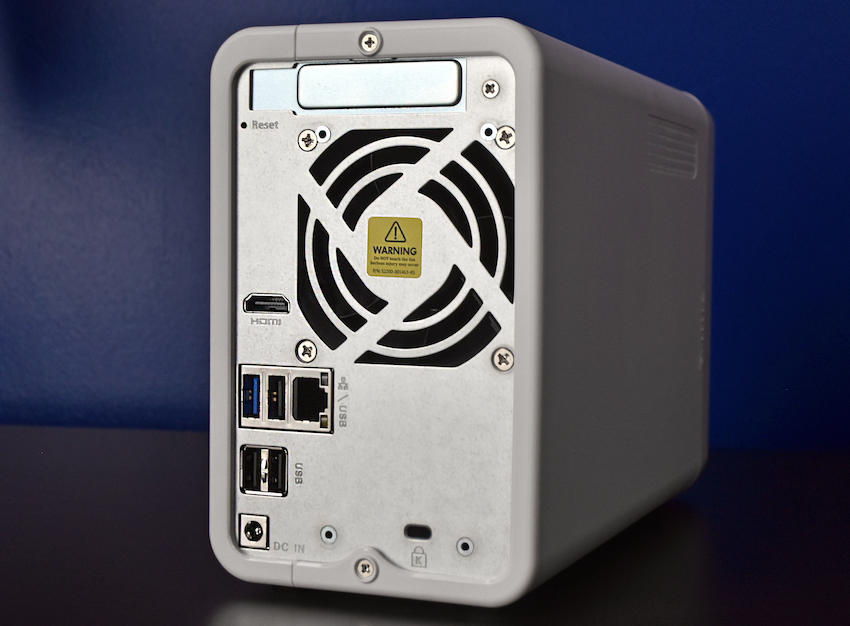 Turning the TS-251D around reveals the rest of the connectivity and button functionality: the Ethernet Port (RJ45), power input, USB 3.0 Type-A port, three USB 2.0 Type-A ports, an HDMI 2.0 port, the Kensington security slot, and the button. 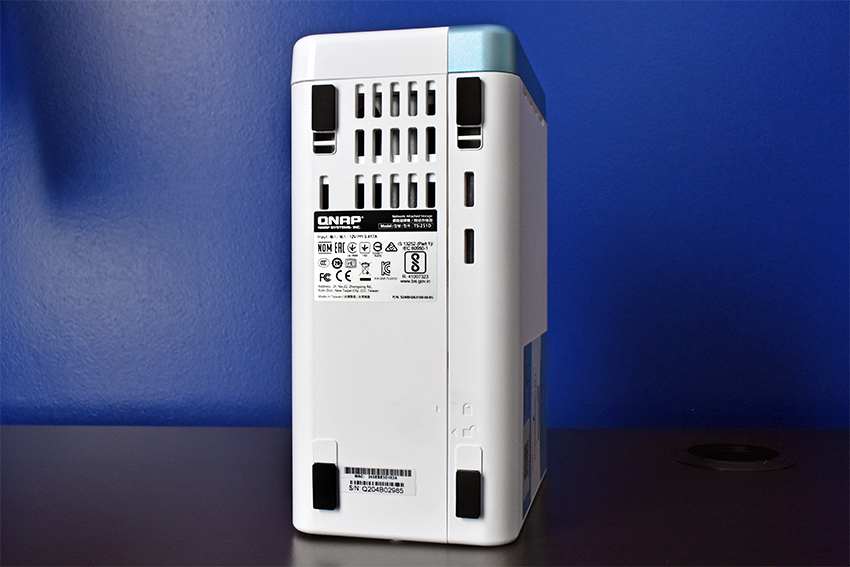 To open up the NAS, simply slide the case locking mechanism down (on the side of the NAS) to release the front cover. 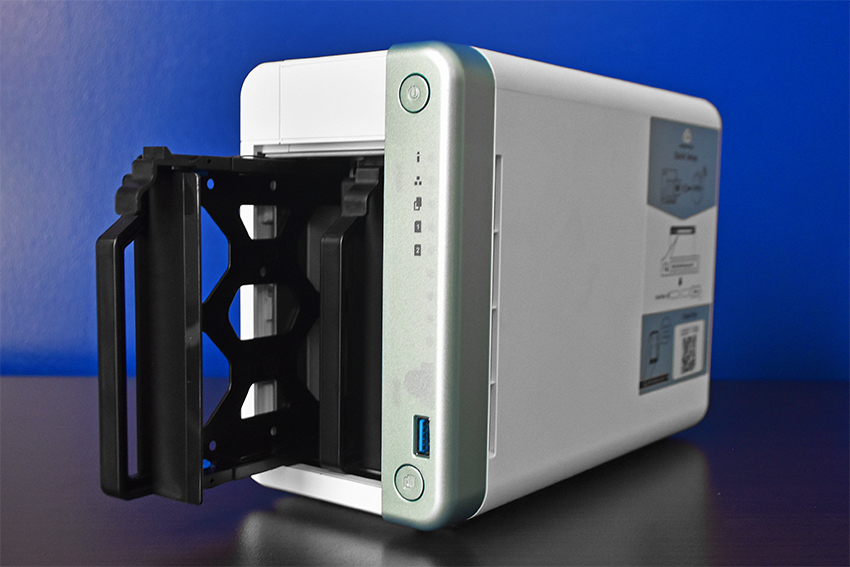 Opening the TS-251D up to install and remove drives is also easy: Slide it off to the left and pull.

Next, just press the drive tray latch and pull it away. This gives access to the drive bays, which are removed by simply pulling them out of their slot. Remove the fastening panels, place the drive in the tray, attach the screws and you’re done.

For our testing, we configured the QNAP TS-251D in RAID1 using two WD Red HDDs.

Compared to the fixed 16 thread, 16 queue max workload we performed in the 100% 4K write test, our mixed workload profiles scale the performance across a wide range of thread/queue combinations. In these tests, we span workload intensity from 2 thread/2 queue up to 16 thread/16 queue. In throughput, the QNAP TS-251D posted a range of 369 IOPS to 1,051 IOPS in iSCSI and 160 IOPS to 153 IOPS in CIFS. 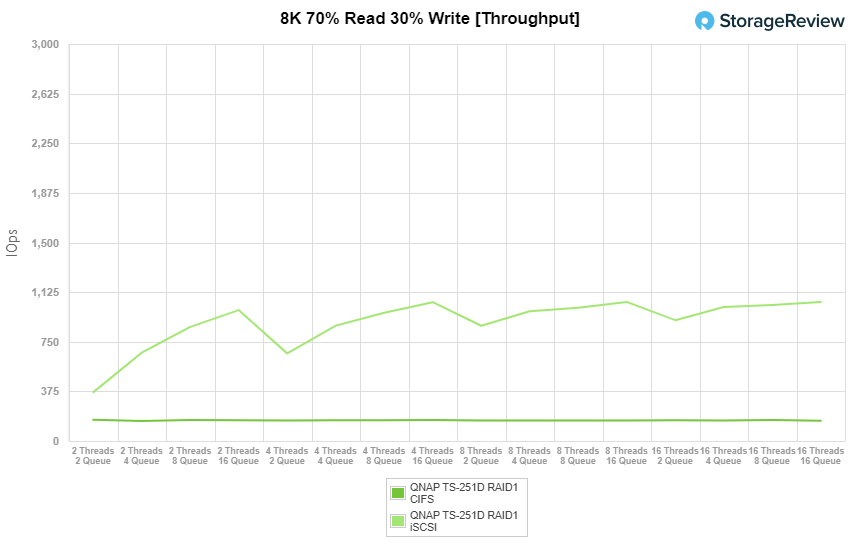 Looking at average latency performance, iSCSI continued to significantly outperform CIFS. Here, the QNAP NAS showed 24.78ms at burst and finished at 1,668.56ms, while iSCSI showed 10.82ms at burst and ended at 243.27ms. 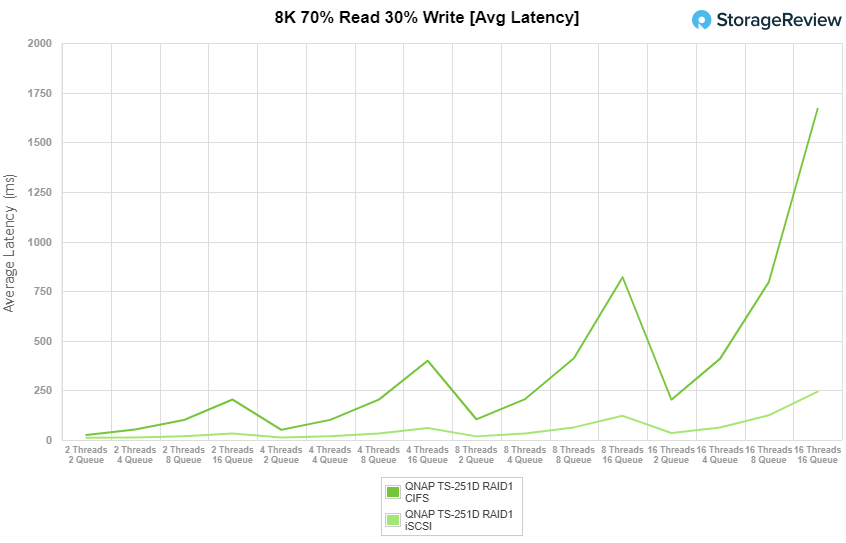 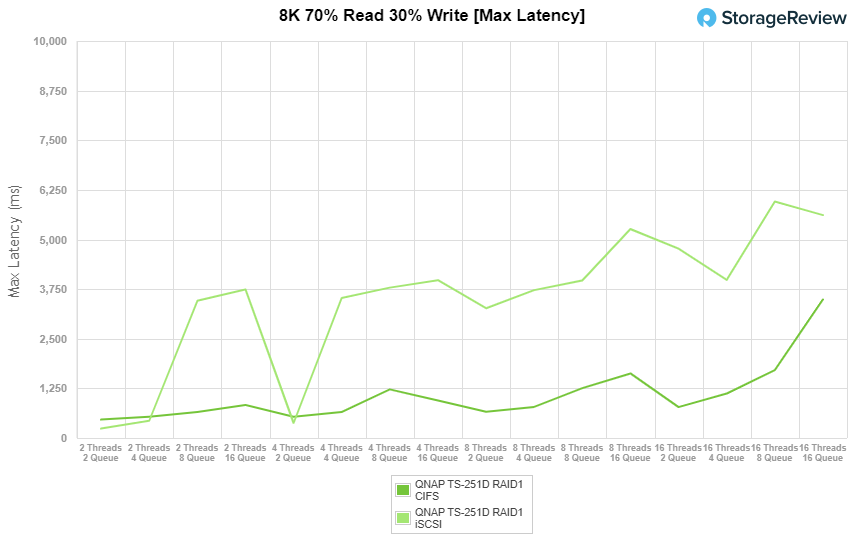 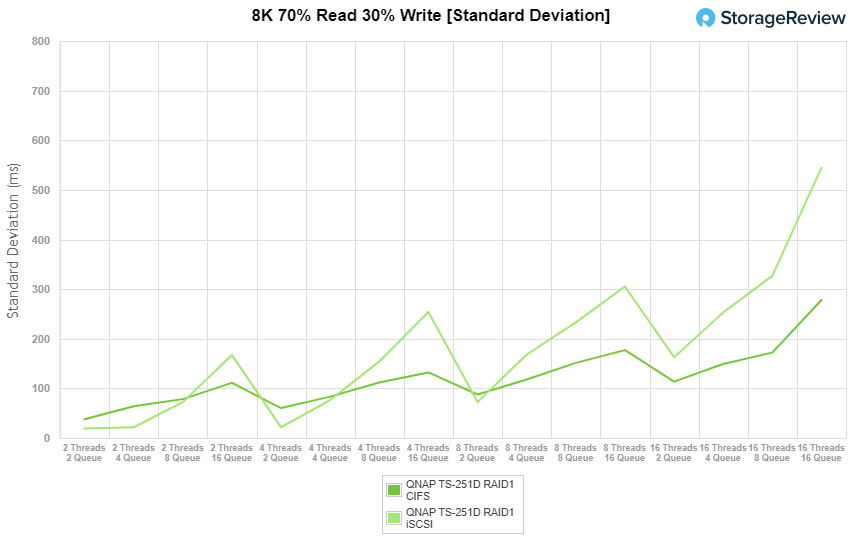 Unsurprisingly, the TS-251D is another solid 2-bay NAS release from QNAP. Though specced similarly to the TS-251+, it has some notable differences: it has more flash memory, uses DDR4 RAM, and comes equipped with a PCIe Gen 2 x4 slot. The latter option allows users to expand the functionality of the NAS, such as adding a QM2 card, which can be outfitted with an M.2 SSD for caching or 10GbE card for high-speed connectivity; a compatible wireless adapter; or a USB 3.1 Gen 2 (10Gbps) card to increase file transmission speeds. It also has some pretty decent performance, which is made possible via its Intel Celeron J4005 dual-core 2.0GHz processor (with burst up to 2.7 GHz), up to 8GB of DDR4 RAM, and 1-Gigabit LAN port.

Overall, the TS-251D is a great option for those who need a personal cloud/back up solution at home or for users looking to set up small multimedia center. And at $360 for the (diskless) 4GB RAM model, consumers can do this for a relatively affordable price point too.