The Sabrent USB 3.2 Tool-Free Enclosure (EC-TFNE) allows users to create a high-speed external storage solution with an external NVMe SSD. As its name indicates, the enclosure is highlighted by its tool-less design, allowing users to easily swap out M.2 NVMe drives. It supports NVMe M-Key M.2 SSDs (PCIe-based) sizes 2230, 2242, 2260 and 2280. The Sabrent enclosure also comes bundled with USB-C and USB-C to USB-A cables, indicating that it supports both PC and Mac systems.

The Sabrent USB 3.2 Tool-Free Enclosure (EC-TFNE) allows users to create a high-speed external storage solution with an external NVMe SSD. As its name indicates, the enclosure is highlighted by its tool-less design, allowing users to easily swap out M.2 NVMe drives. It supports NVMe M-Key M.2 SSDs (PCIe-based) sizes 2230, 2242, 2260 and 2280. The Sabrent enclosure also comes bundled with USB-C and USB-C to USB-A cables, indicating that it supports both PC and Mac systems. 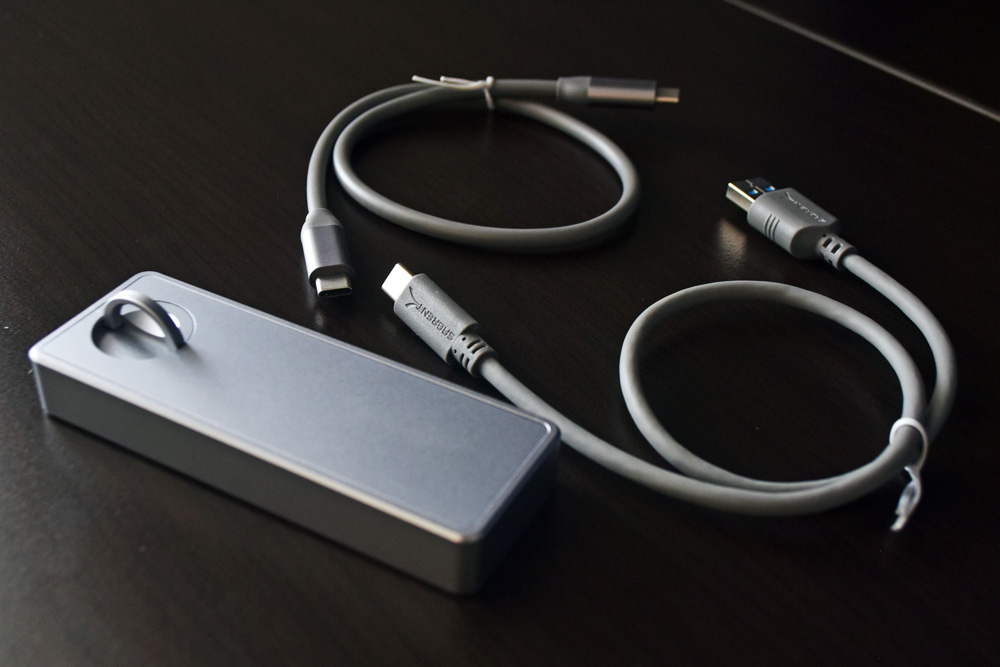 Its USB 3.2 connectivity controller, which supports data transfer speeds up to 10Gbps, is very useful because it allows the attached NVMe SSDs to take full advantage of its the speedy interface’s transfer rates. Though the enclosure is still compatible with both USB 3.1 and USB 3.0 connections, you would will certainly see a significant drop in performance if you are using them.

At 4.23 inches in length and 1 and a half inches in width, the compact Sabrent USB 3.2 Tool-Free Enclosure can easily fit in a normal-sized pocket making it a highly portable storage solution. It features a durable aluminum sandblasted shell that weighs in at 7 ounces and is solid enough to be used as a blunt weapon, though this isn’t recommended by the manufacturer.

This build makes it inherently optimized for heat dissipation without the need of a fan. Coupling this with zero moving parts, this is a very silent, reliable device that can take a beating while remaining cool on heavy usage.

To install an M.2 SSD, turn the device to the side with the circle key ring then lift, turn it counter clock-wise and pull. The ring is a bit heavy for its use case, so you really have to put some force into it. It would have been nice if the latch was a light and easy to maneuver. 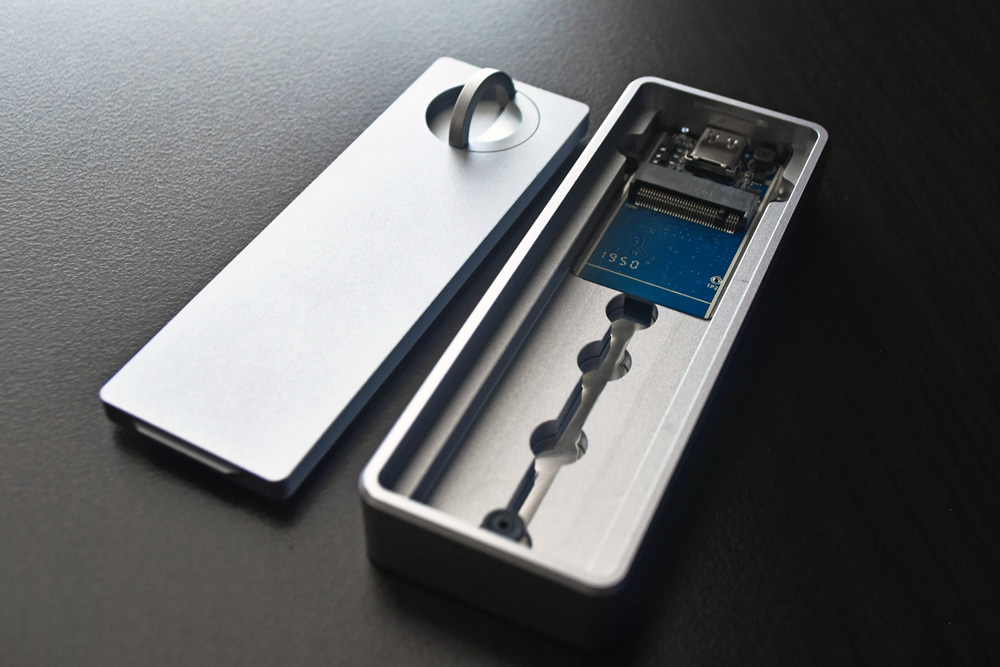 Once open, you’ll see thermal tape with protection film on the inside of the cover, so be sure to remove the film before you put the cover back on. 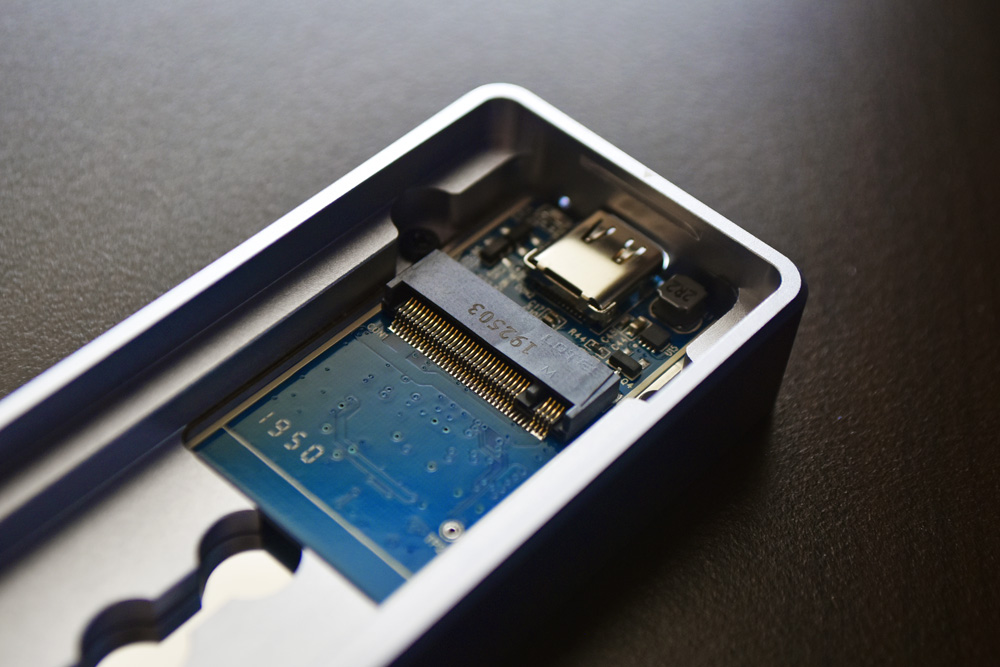 The enclosure features a handy magnetic screw that sits firmly in place when securing the M.2 NVMe SSD on the enclosure. You can easily move it to four different slots, depending on the size of your SSD.  Unfortunately (in our case, anyway), we had to unscrew the entire board because whoever assembled it placed it too far back and thus the USB-C connector wouldn’t connect fully. One of the main lures of this enclosure is the tool-less design for quick and easy installation, so we were disappointed with this extra assembly step we had to take in order to get it to work. 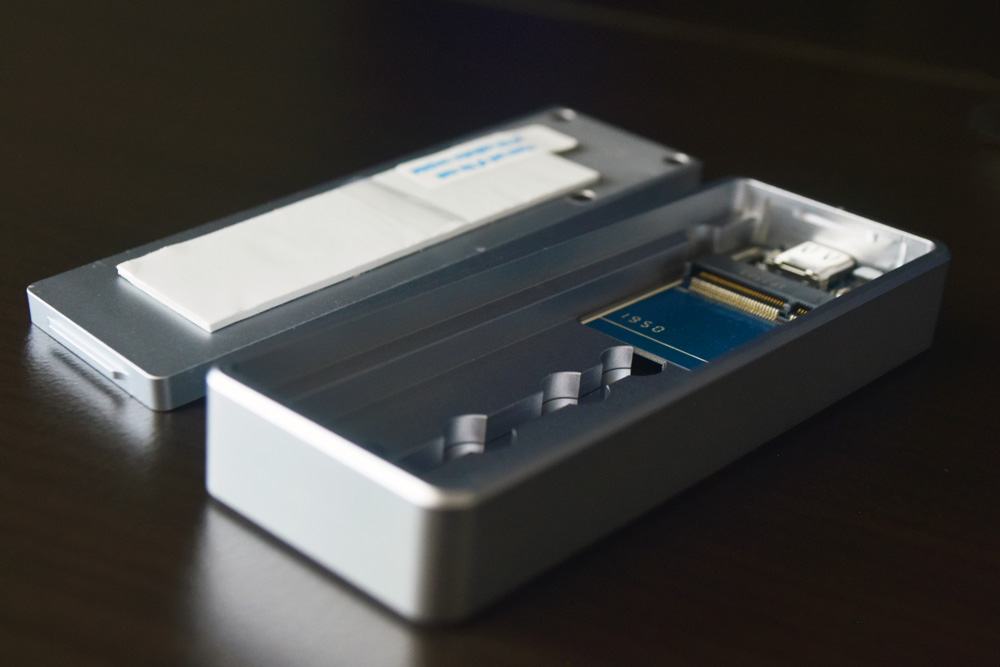 Nonetheless, once the SSD is secured in place, put the cover back on, twist the circle key, and your good to go.

To test the performance of the Sabrent enclosure, we installed the company’s 2TB Rocket NVMe PCIe SSD and will look at IOMeter on an Lenovo ThinkCentre M90n.

We compared the Sabrent enclosure to the following USB 3.2 portable drives:

We were also going to use the BlackMagic benchmarking software for testing; however, we were unable to get the enclosure working on our 2019 MacBook Pro. Sabrent indicates that their enclosure fully supports Mac OS, but we had no luck getting it to work after trying everything for several hours (even after contacting support). This might be due to insufficient compatibility testing before it hit the market.

The Sabrent USB 3.2 Tool-Free Enclosure for NVMe PCIe M.2 SSDs is highlighted by its solid and extremely rugged aluminum build. It also features a neat method to securing SSDs in place via magnets, which can easily be moved into different slots depending on which M.2 size your drive is (2230, 2242, 2260 or 2280). It worked very well.

Though it performed well in our tests, we did find a few issues that are worth mentioning. Sabrent indicated that this is a tool-less enclosure when adding and removing drives; however, we had to literally unscrew the board and move it into a position so we could fully connect the SSD to the pins. We’re not sure if we just got unlucky and it’s just an issue with only our review model, or if this is an oversight with the entire production. In addition, Sabrent indicated that it supported Mac computers, but we were unable to get it to work with our new MacBook Pro (we used their in-house SSD, so there shouldn’t be compatibility issues). We will certainly update this review if are are able to get it working.

Other than these problems, we really liked the Sabrent enclosure. It is built extremely tough and the equipped drive performed very well.