The QNAP TS-332X is the second model of the company’s multifaceted 3-bay NAS family, featuring three M.2 SSD slots and support for RAID5. Like all QNAP consumer devices, the TS-332X seems simple on the outside. However, the new NAS comes equipped with a comprehensive range of useful features. This includes SSD Caching, Auto Tiering, a 10GbE SFP+ port and three M.2 SATA 6Gb/s SSD slots, all of which help to make this an integrable device for new businesses and SMB environments looking for a NAS solution.

The QNAP TS-332X is the second model of the company’s multifaceted 3-bay NAS family, featuring three M.2 SSD slots and support for RAID5. Like all QNAP consumer devices, the TS-332X seems simple on the outside. However, the new NAS comes equipped with a comprehensive range of useful features. This includes SSD Caching, Auto Tiering, a 10GbE SFP+ port and three M.2 SATA 6Gb/s SSD slots, all of which help to make this an integrable device for new businesses and SMB environments looking for a NAS solution. 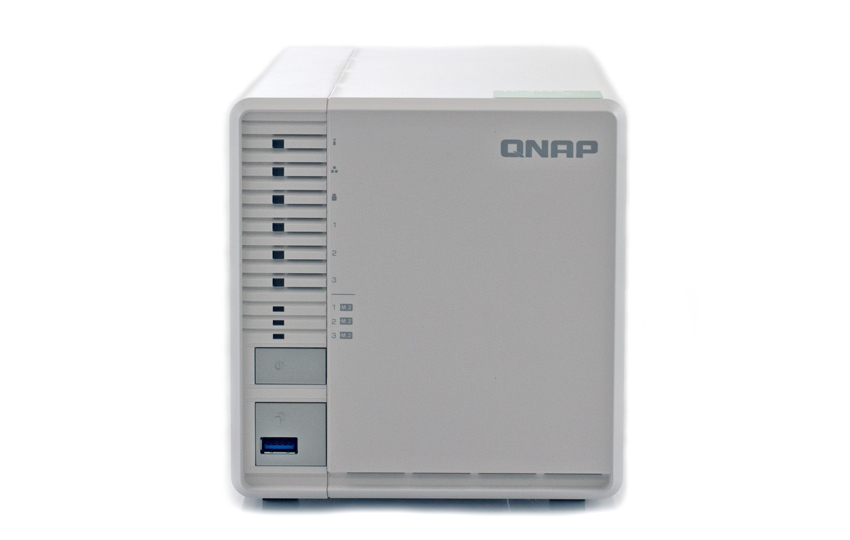 As we mentioned above, the TS-332X can utilize SSD caching/tiering or flash volumes via its three native SATA 6Gb/s M.2 SSD slots (2280 form factor) to further drive speedy performance for IOPS-intensive applications. This combination of drives in a small footprint gives users a balance of capacity, performance, and protection with a modest price tag.

The TS-322X looks a bit different than what we’re used to seeing with QNAP NAS solutions, though it’s still ruggedly built. It features a plastic white enclosure around the sides and back with a white face plate in the front.

At the top left (stacked vertically) are the system LEDs, which include the Status LED, LAN LED, USB LED, Drive 1 through 3 LEDs, and M.2 SSD 1 through 3 LEDs. Also on the left are the Power button USB One Touch Copy button and port. 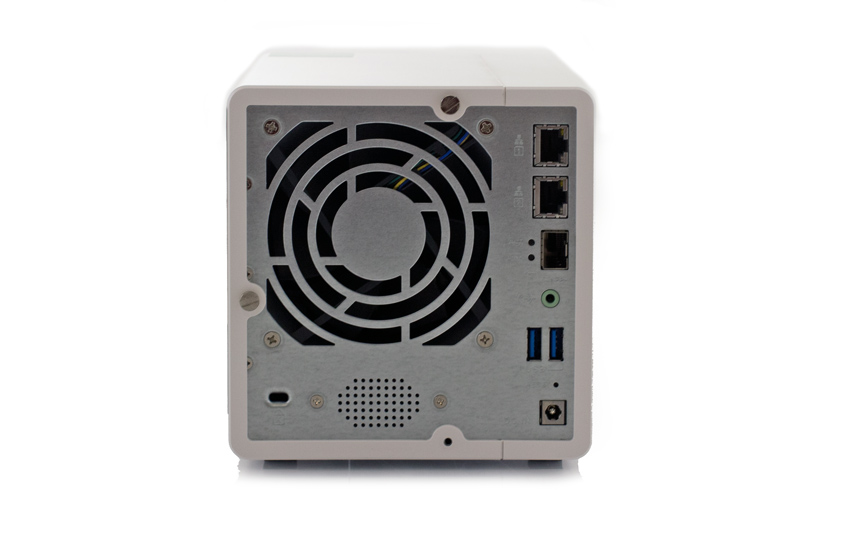 On the back of the NAS is the Gigabit Ethernet RJ45 ports, power input, 10 Gigabit Ethernet SFP+ port, speaker, 3.5 mm line-out jack, Kensington security slot, USB 3.0 Type-A ports, reset button and a smart fan, the latter which takes up most of the back panel’s real estate.

The TS-332X is compatible with both 3.5-inch and 2.5-inch HDDs as well as 2.5-inch SSDs and M.2 SSDs (native to the PCB). To install these drives, you will need to completely remove the case cover by removing the three screws on the back. Simply then slide the cover off to detach it from the chassis to access the drive trays.

Our standard StorageReview Enterprise Test Lab regimen runs the device through its paces with a battery of varying performance levels and throughput activity workloads. For the TS-332X, the following profiles were utilized to compare performance between different RAID configurations and different networking standard protocols (SMB and iSCSI):

Our first benchmark measures the performance of random 4k transfers comprised of 100% write and 100% read activity. In this environment, the TS-332X posted its best read throughput under a iSCSI (block-level) configuration with 1,391 IOPS, though it had a slightly slower write performance with 201 IOPS. Using CIFS (file level), the TS-332X hit 224 IOPS write and 164 IOPS read.

In maximum latency, we see the TS-332X’s best read performance in iSCSI once again with 1,369.4ms. The CIFS file-level test showed much higher read latency at 3,099ms read, though it had much better write performance compared to iSCSI.

In our standard deviation section of the 4k test gives us a good visualization in terms of consistency. Here, the TS-332X posted 242.88ms write and 111.09ms read during CIFS connectivity, while iSCSI showed 1115.13ms write and 127.265ms read.

Compared to the fixed 16 thread, 16 queue max workload we performed in the 100% 4k write test, our mixed workload profiles scale the performance across a wide range of thread/queue combinations. In these tests, we span workload intensity from 2 threads and 2 queue up to 16 threads and 16 queue. First we are looking at throughout, where the TS-332X showed its best performance in the iSCSI configuration with a range of 318 IOPS in burst and 420IOPS in the terminal (16 Threads, 16 Queue).

Looking at max latencies, the TS-332X posted its best performance in iSCSI again, posting a range of 758.56ms through 2,980.36ms. CIFS showed major spikes in the later queue depths, ending up with 4,793.6ms.

Our last workload in our small NAS Synthetic Workload testing consists of the 128k test, which is a large block sequential test that shows the highest sequential transfer speed. When looking at the 128k performance of 100% write and 100% read activity, the TS-332X posted its top read and write speeds of 1.04GB/s and 494MB/s, respectively, with iSCSI. CIFS wasn’t far behind with posted 1.02GB/s read and 426MB/s write.

Powered by an AnnapurnaLabs Alpine AL-324 1.7 GHz Cortex-A57 processor up to 16GB of RAM, the TS-332X is a solid entry into QNAP’s new 3-bay NAS family. It comes equipped with three M.2 SSD slots, supports RAID5 and has diverse range of useful features SMBs and ROBOs need to get their server going, whether it’s for private cloud, backup, sharing, and disaster recovery use cases.

To measure its performance, we tested the TS-332X in both CIFS (file-level) and iSCSI (block-level) storage connectivity configurations using Toshiba 8TB HDDs. Results were overall pretty good and as expected. In our random 4K access benchmark, the TS-332X showed its best read performance under the iSCSI configuration with 1391 IOPS, while CIFS showed the best write speeds with 224 IOPS. When looking at 100% 8K sequential throughput, which uses a 16T/16Q load in 100% read and 100% write operations, the QNAP NAS recorded 41,126 IOPS write and 91,222 IOPS read in iSCSI (CIFS performance was much lower). Lastly, during our 128k test, large block sequential test, the TS-332X posted read and write speeds of 1.04GB/s and 494MB/s, respectively, with iSCSI with CIFS hitting a close 1.02GB/s read and 426MB/s write.

With a starting price of a little less than $400, the TS-322X provides good value, flexibility and performance, thanks to the additional SATA M.2 bays and 10GbE port.