The Lenovo ThinkSystem SR850 is a 2U server that offers a lot of flexibility under the hood that can lead to massive performance for demanding applications. Announced earlier this year, the S850 is set to go leaps and bounds over previous Lenovo servers with 233% more cores with the addition of up to four Intel Xeon Scalable CPUs, 400% more memory, and 76% faster performance. The SR850 is built for general business use cases, but with all of that performance, it can also handle the most demanding database, virtualization and artificial intelligence workloads.

The Lenovo ThinkSystem SR850 is a 2U server that offers a lot of flexibility under the hood that can lead to massive performance for demanding applications. Announced earlier this year, the S850 is set to go leaps and bounds over previous Lenovo servers with 233% more cores with the addition of up to four Intel Xeon Scalable CPUs, 400% more memory, and 76% faster performance. The SR850 is built for general business use cases, but with all of that performance, it can also handle the most demanding database, virtualization and artificial intelligence workloads.

Future-proofing is a large concern for many when evaluating the purchase of new hardware. With the ThinkSystem SR850, Lenovo has future-proofing built in. Using a mezzanine design, users can add two additional CPUs to the original two, bringing the total to four. The SR850 can be outfitted with a whopping 6TB of RAM. And Lenovo AnyBay drive bays can fit SAS, SATA, and NVMe drives in the same bay, which is somewhat novel in this class of server. In the case where users need to upgrade performance or switch to a different storage media, the SR850 will be ready. 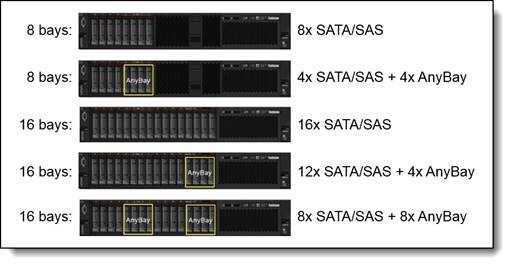 The Lenovo ThinkSystem SR850 has the same overall design as other 2U Lenovo servers. The front of the device has sixteen 2.5” drive bays that take up most of the real estate on the left, and USB ports and status lights on the right. The front drive bays can be swapped or upgraded by the end user, which StorageReview did when enabling the system for NVMe SSDs. We swapped out the SAS/SATA backplane with one that supports NVMe SSDs in four out of the eight slots, and added the appropriate CPI cabling to the upper and lower motherboards.

Moving around to the rear of the device, we see two hot-swap PSUs on the right. The server can have up to nine PCIe slots depending on how many CPUs are leveraged. It also has NMI, Ethernet port for XCC, Serial port, two USB 3.0 ports, and an ID button and LEDs running along the bottom.

Opening up the server, one can see the expansion tray with the additional CPUs and DIMM sockets. 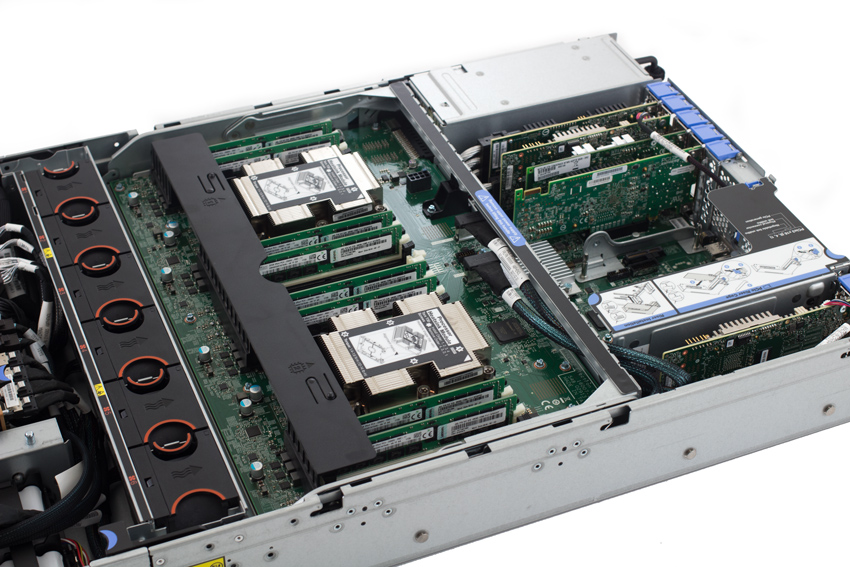 Removing the tray, one can see the main CPUs. 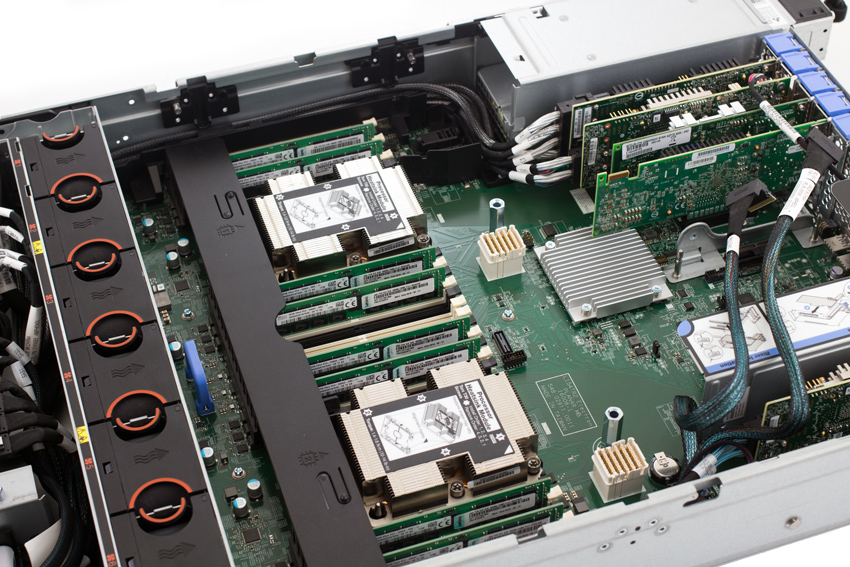 On the main screen XClarity lays everything out for users to see quickly and easily. There are five main windows that show a Health Summary (that breaks down various hardware components), Quick access (for actions such as turning the system on or off), a Remote Console Preview, System Information and Setting, and Power Utilization. Down the right side of the screen are main tabs including: Home, Events, Inventory, Utilization, Remote Console, Firmware Update, Server Configuration, and BMC Configuration. 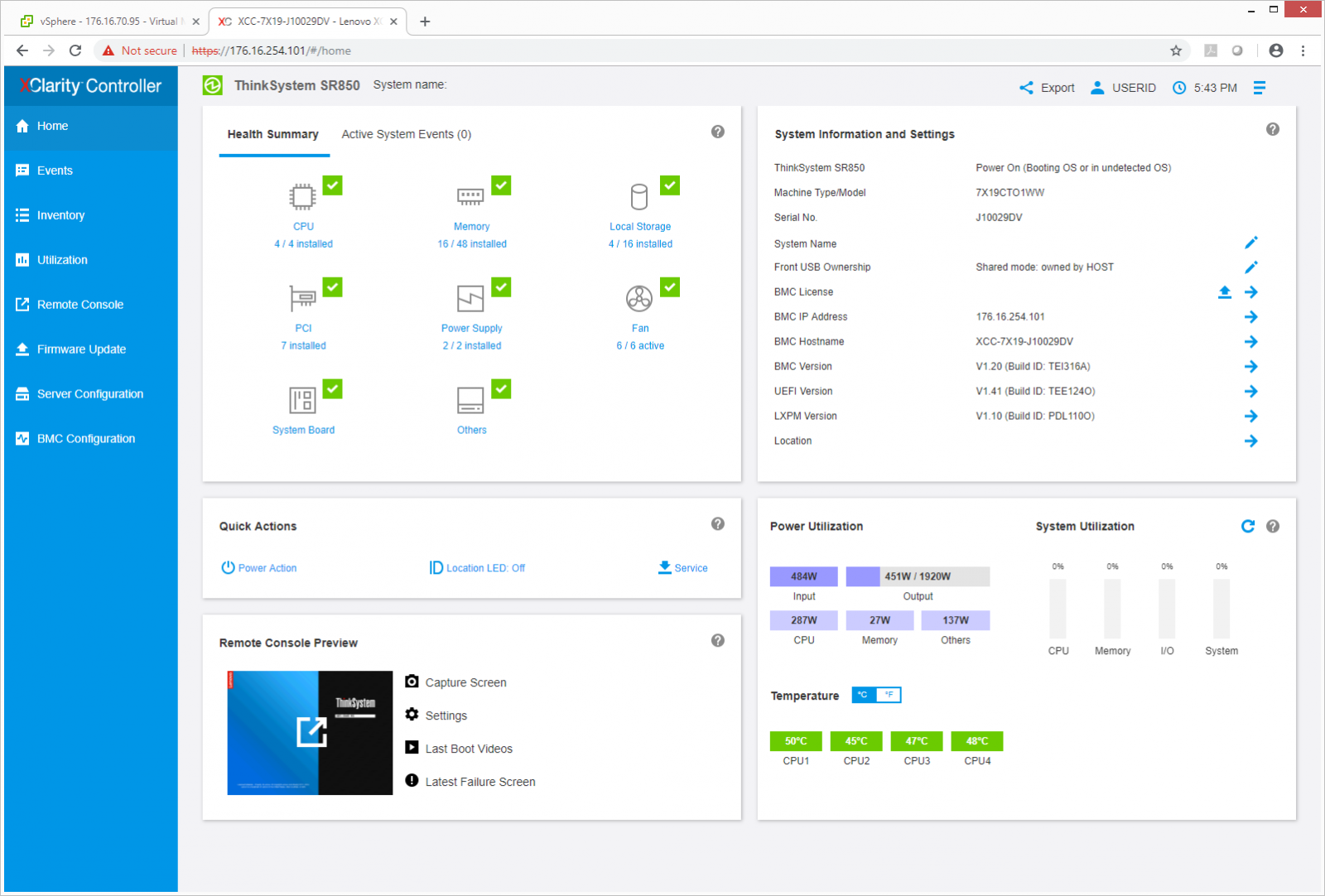 The Inventory tab lists the various hardware components of the server and gives a basic description, i.e. how many cores per CPU or the capacity of RAM. 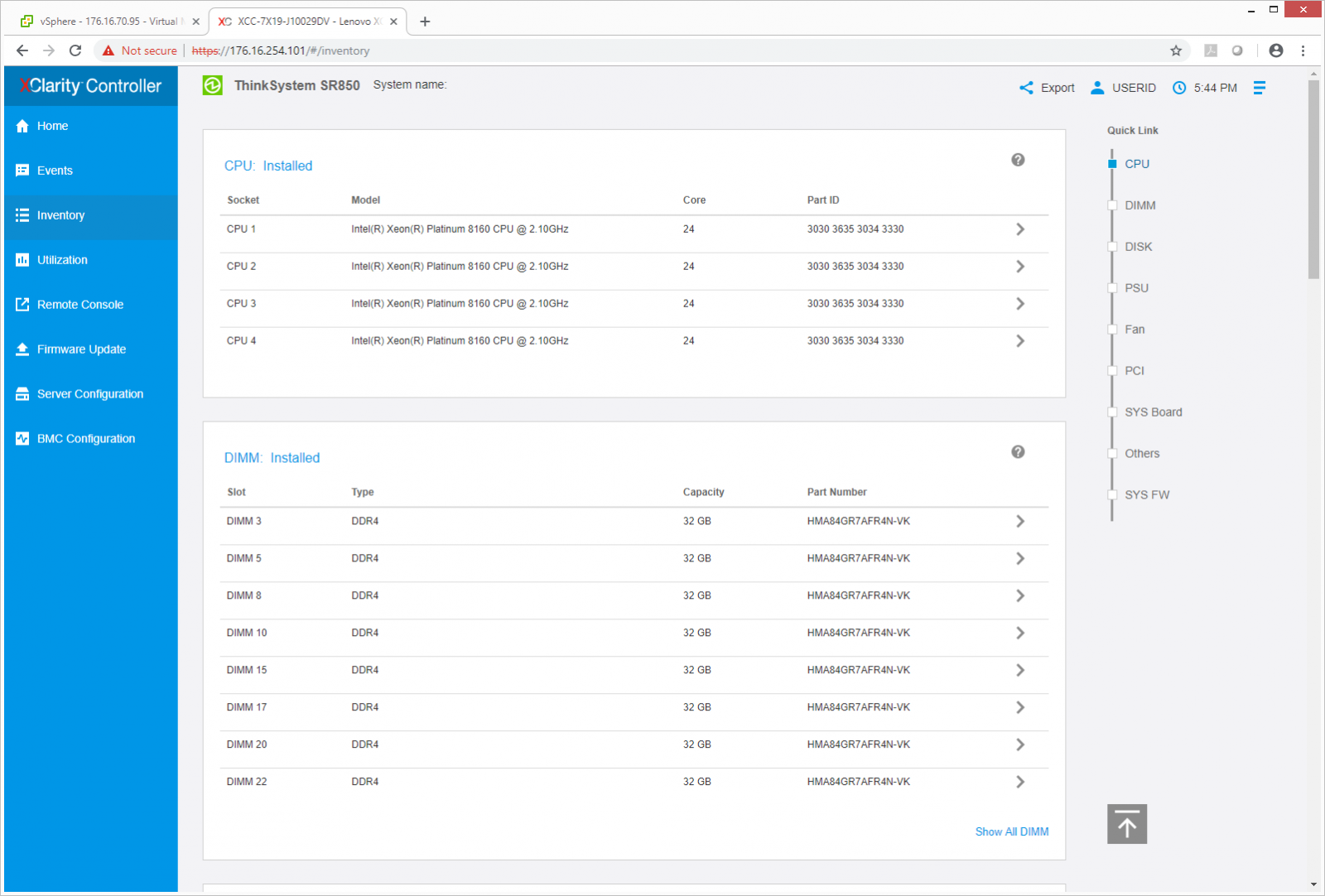 The Utilization tab shows what resources and how much of those said resources are being used by the server and offers either graphical or a table view. 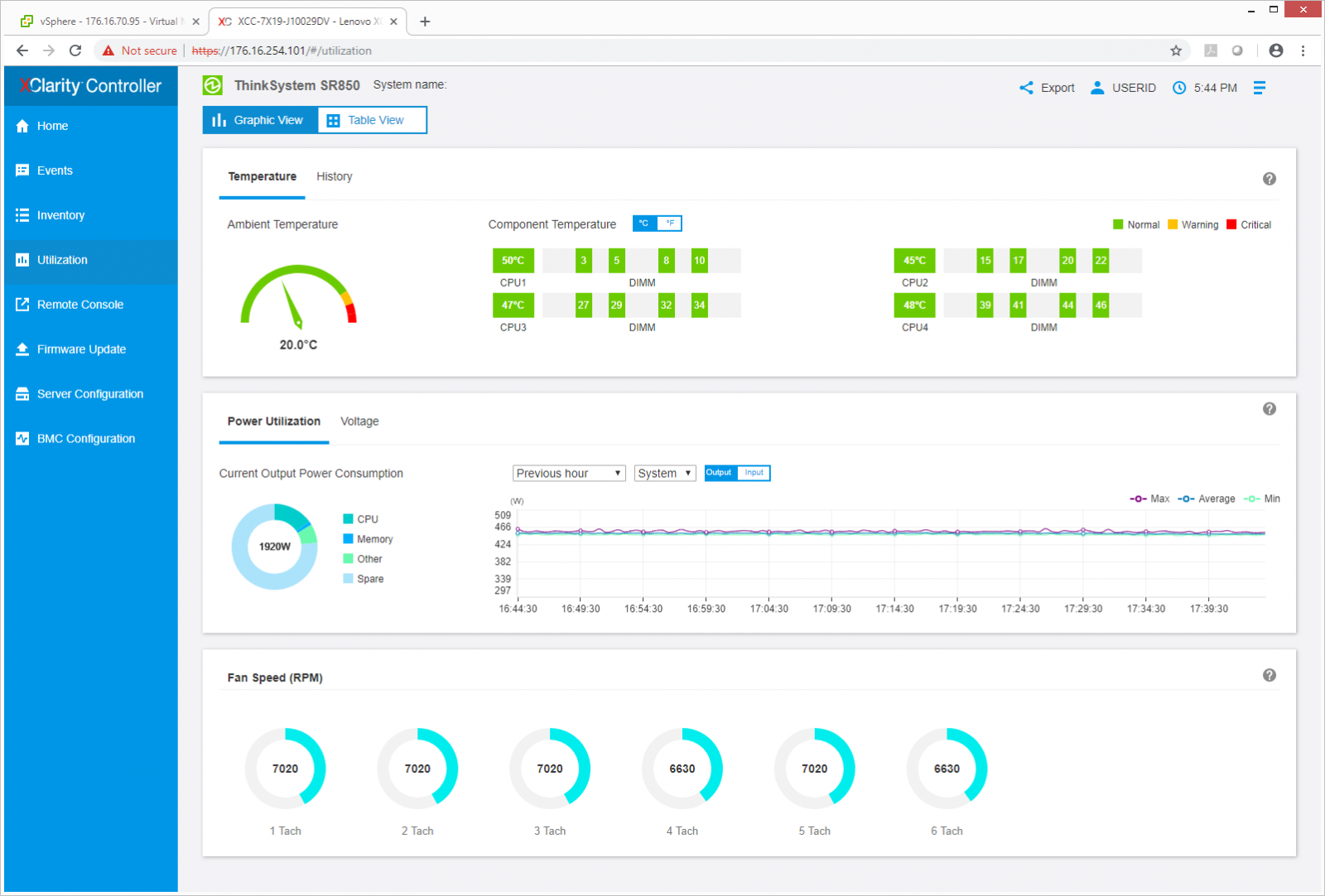 The Remote Console tab shows a review of what a remote console would look like as well as allowing users to configure their remote consoles. 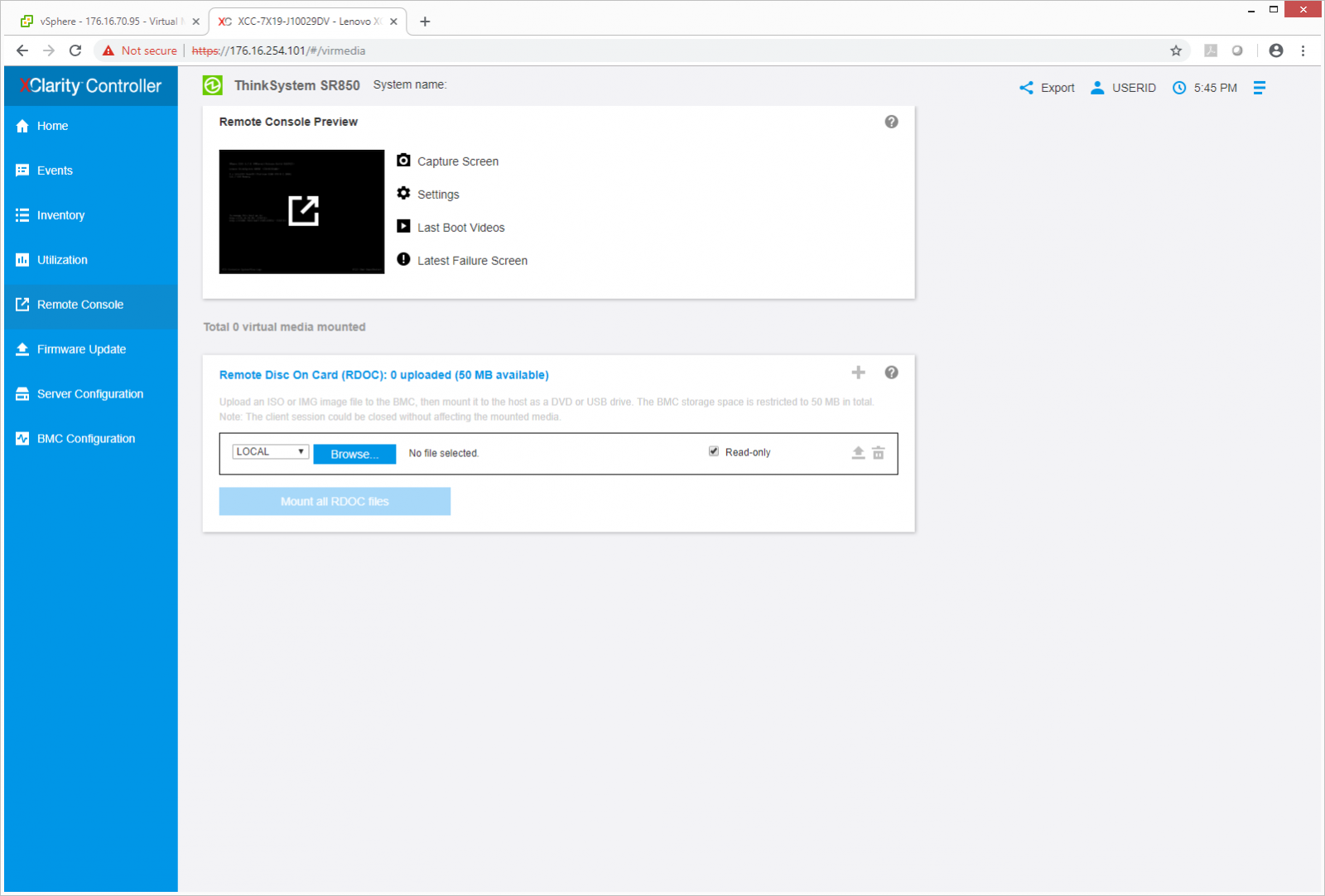 With the Firmware Update tab, admins can see system and/or adaptor firmware updates that are available and manually update them. 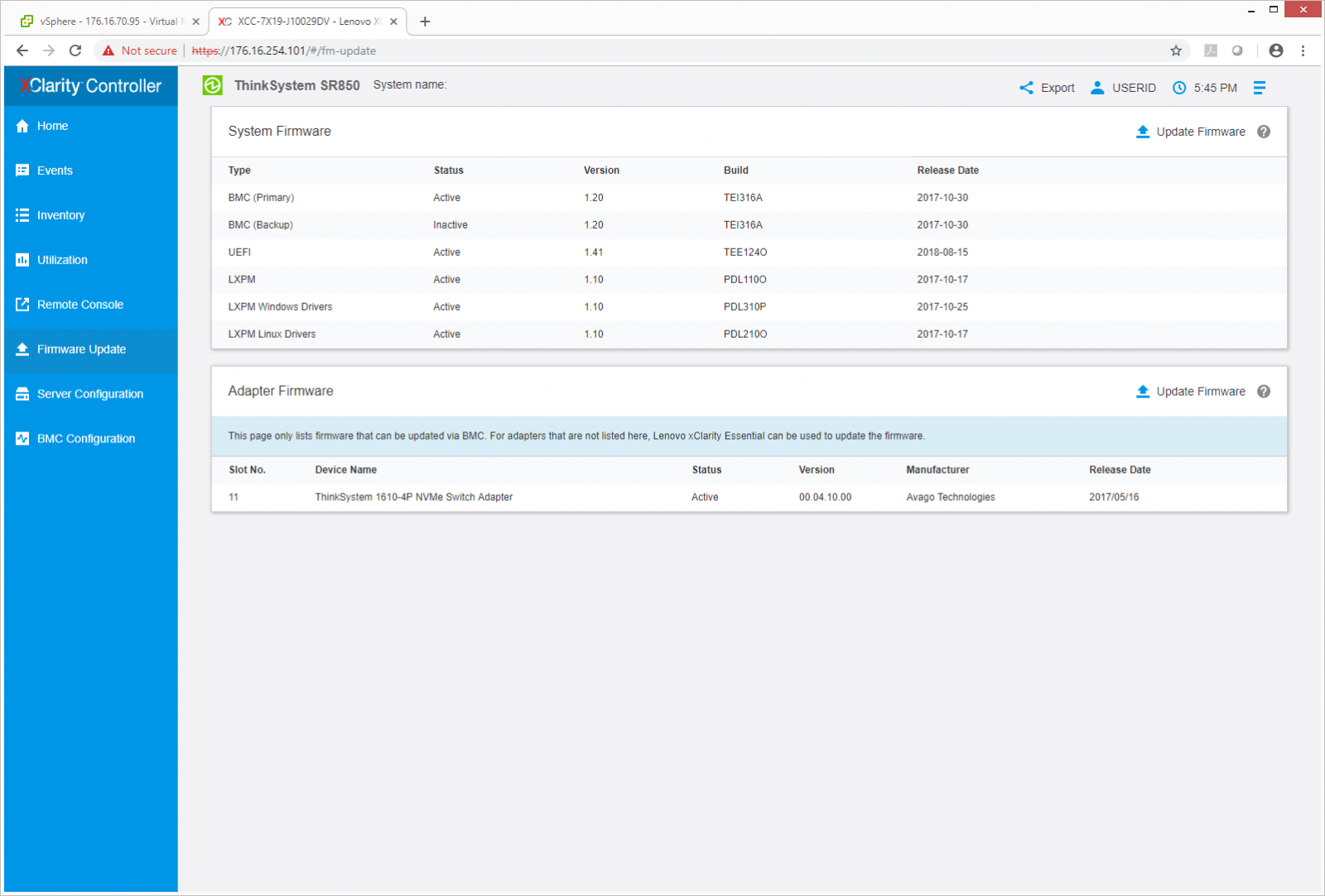 The next main tab is Server Configuration with several sub tabs including Adapters, Boot Options, Power Policy, RAID Setup, and Sever Properties. As far as Boot Options go, admins can setup either UEFI boot or Legacy boot, decide the boot order and device used, as well as set up a one time boot device. 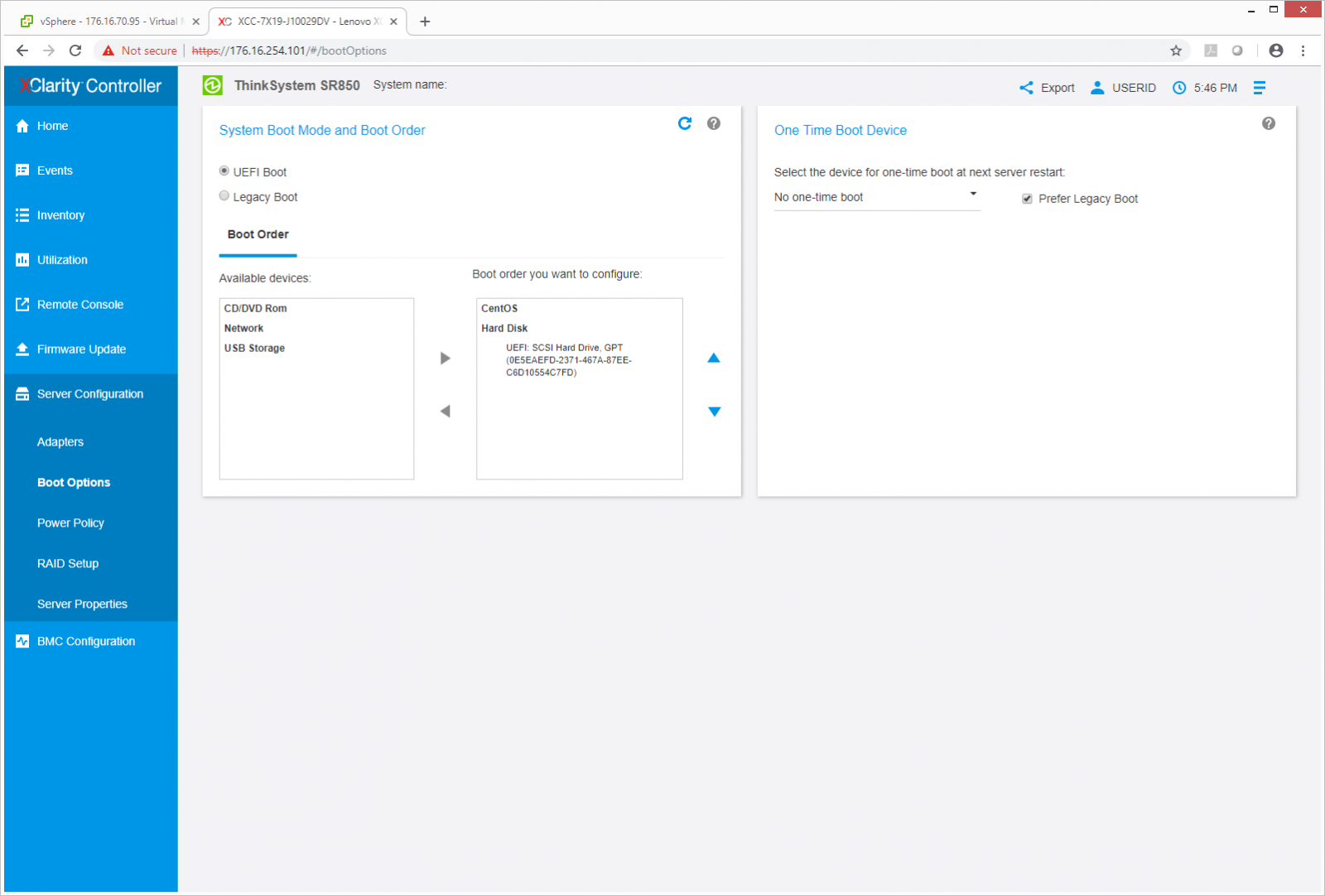 The Power Policy allows admins to set up either redundant or non-redundant as well as set the power restore policy: setting it to stay off, on, or revert to the previous settings after a power restore. 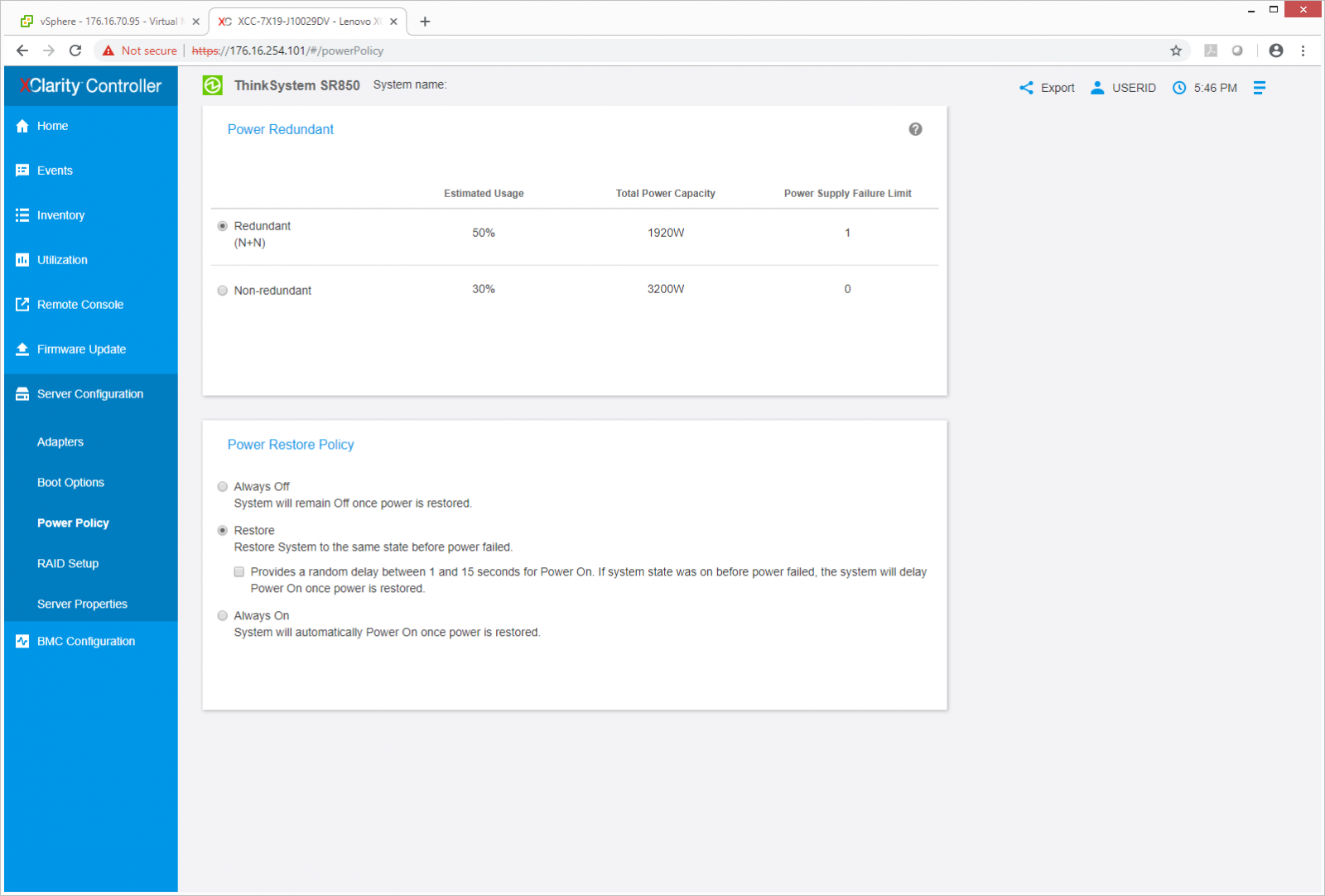 RAID setup lets admins set RAID at the array level per controller or at the storage level. 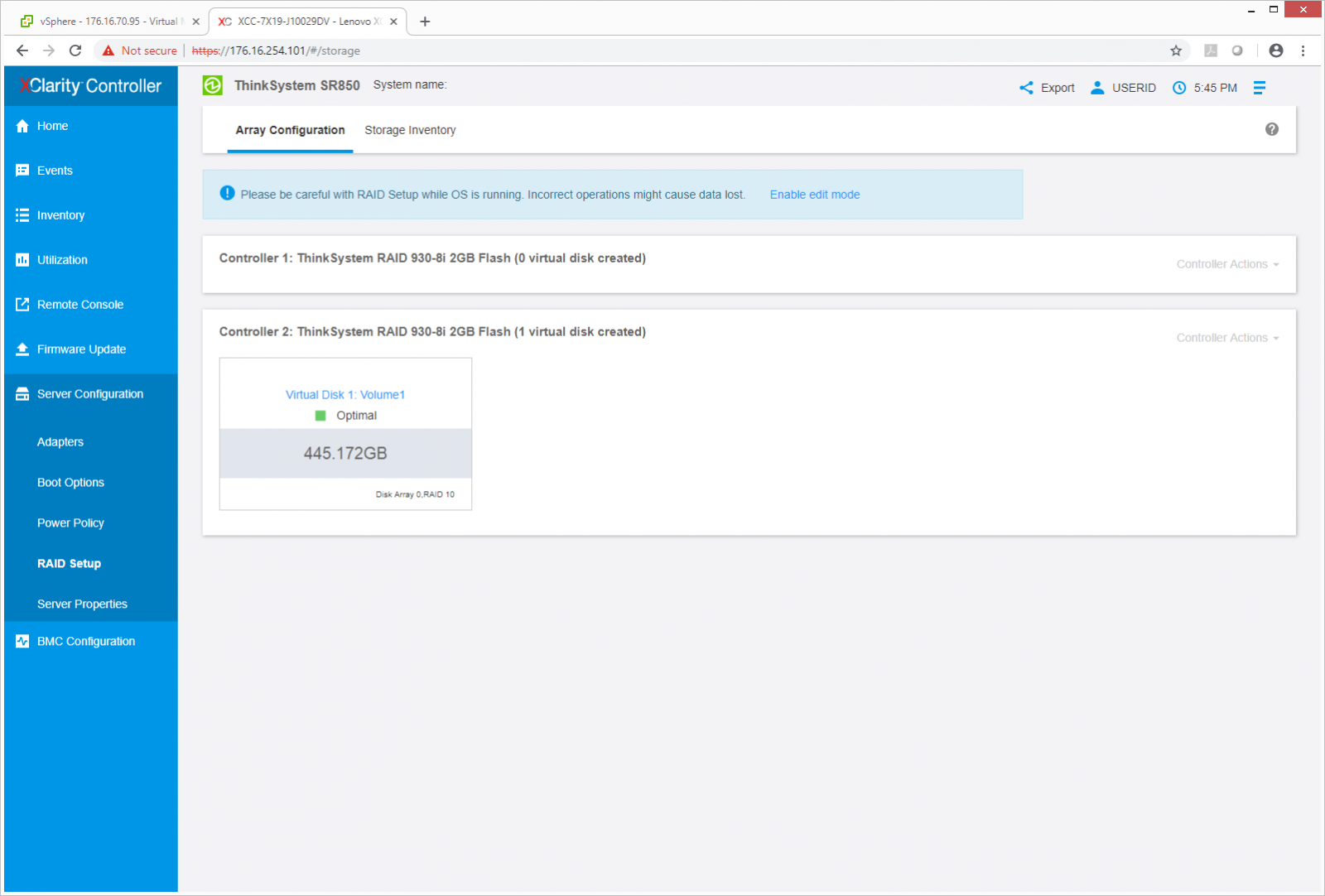 With Baseboard Management Controller (BMC) Configuration, admins can set their BMC Configuration, back it up, restore it from the backup, or reset it to factory defaults. 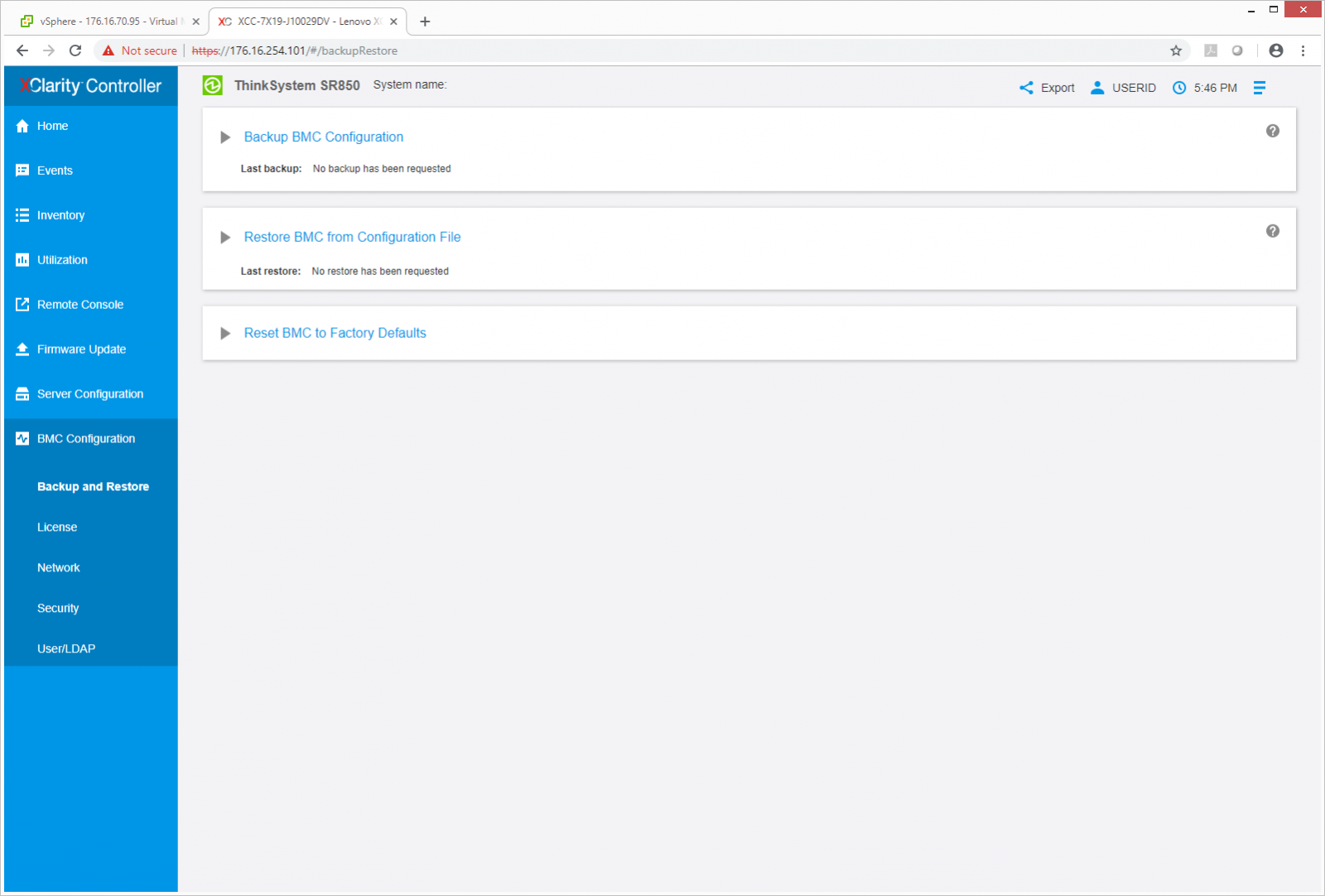 Overall the XClarity Controller looks nice and is generally intuitive to use. There are a few rough spots though and some of the reporting isn’t as nice as other top-tier server brands. To be fair, we did not explore XClarity Administrator where some of the issues we ran into may be addressed there.

To measure performance and storage potential of the Lenovo ThinkSystem SR850, we utilized a bare-metal scenario operating on a CentOS 7.4 platform, as well as virtualized Sysbench MySQL performance across 8 and 16 VMs with VMware installed. In our bare-metal configuration, we focused on synthetic performance as measured with VDbench, and in our virtualized environment, we ran eight and sixteen MySQL VMs operating inside of ESXi 6.5.

In both scenarios, we leveraged a full NVMe storage backend leveraging Memblaze PBlaze5 4TB SSDs. These drivers offer tremendous performance and allow us to saturate compute performance before running out of storage potential. In terms of compute power, the system is configured with four Intel 8160 CPUs, which offer a 2.1GHz clock speed and 24 cores each, and 512GB of DDR4 memory. In total, that gives us 96 cores and 201.6GHz of compute power.

Our last section of local performance testing focuses in on synthetic-workload performance. In this area, we leveraged eight NVMe SSDs in CentOS 7.4, measuring combined performance of the 8 NVMe SSDs partitioned to 25% utilization. This type of test is useful to show what real-world storage metrics look like across different workloads.

Looking at peak read performance, the SR850 was able to maintain sub-millisecond latency performance throughout with a peak performance of 4,094,070 IOPS with a latency of 195μs.

With our SQL workloads, we again saw sub-millisecond latency throughout our testing. In SQL we saw a peak performance of 1,793,443 IOPS with a latency of only 139μs.

Our Oracle workloads showed the Lenovo SR850 continue to do well with a peak performance of 1,370,497 IOPS with a latency of 175μs.

The Lenovo SR850 is a mainstream 2U server that seriously steps up its compute game from its predecessors. The SR850 can house up to 4 Intel Xeon Scalable CPUs and up to 6TB of RAM, again, all within a 2U footprint. To top that off, the server comes with Lenovo AnyBay drives, allowing users to use SAS, SATA, or NVMe (though it can house fewer NVMe drives than the other two interfaces). While built for general business applications, it can run more powerful workloads by adding more CPUs and/or RAM. It also is designed to be inherently future-proof, as users can add more processors and RAM instead of replacing the entire server.

Overall the Lenovo ThinkSystem SR850 is a highly flexible system capable of handling both mainstream applications in a more modest configuration, or emerging workloads like big data and AI with the beefed up quad-CPU and high RAM footprint. The SR850 is also very tunable when it comes to storage. Thanks to AnyBay technology, the drive backplanes can be swapped so customers can buy a system configured on way today, then swap out to something more NVMe heavy, for instance, in the future.