Since Toshiba’s acquisition of OCZ back in early 2014, the company has turned the focus of OCZ’s line of SSDs to consumer-driven solutions. The Toshiba OCZ VX500 Series continues this trend as their newest mid-range family of SSDs designed for mainstream users looking to upgrade their PCs or notebooks to a solid state-based setup. The VX500 series is a direct successor to the Vector 180 line, and offers more or less the exact same features. Toshiba does claim, however, that the VX500 boasts higher endurance due to its MLC NAND and is designed specifically for write-intensive environments.

Since Toshiba’s acquisition of OCZ back in early 2014, the company has turned the focus of OCZ’s line of SSDs to consumer-driven solutions. The Toshiba OCZ VX500 Series continues this trend as their newest mid-range family of SSDs designed for mainstream users looking to upgrade their PCs or notebooks to a solid state-based setup. The VX500 series is a direct successor to the Vector 180 line, and offers more or less the exact same features. Toshiba does claim, however, that the VX500 boasts higher endurance due to its MLC NAND and is designed specifically for write-intensive environments. 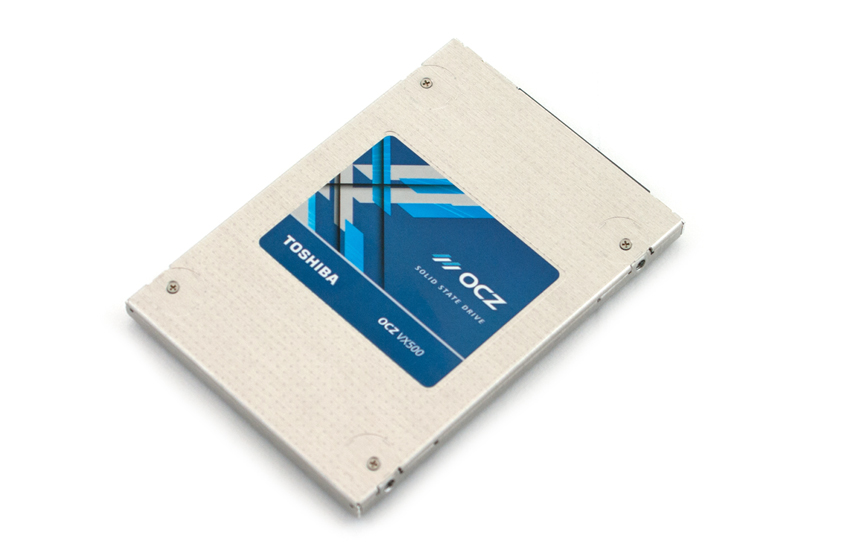 When it comes to the specifics of its performance, the OCZ VX500 is quoted with speeds that are slightly under the Vector 180 SSDs with sequential reads and writes up to 550MB/s and 515MB/s (compared to its predecessor’s 550MB/s read and 530MB/s write), respectively, while random read and write throughput are expected to reach 92,000 IOPS read and 65,000 IOPS write.

Like the recent OCZ drives before it, the VX500 also features the incomparable 5-year ShieldPlus warranty plan, which is designed to eliminate the headaches that are usually inherent of support and warranty claims. Users simply need to provide their serial number (no original purchase receipt required), and if that drive is deemed to be defective, they will receive a brand new VX500 SSD right away. There is really nothing quite like this plan as far as consumer SSDs go.

The VX500 sports a completely different design compared to previous OCZ consumer drives. Instead of the using the entire enclosure for the branding, the new SSD uses a smaller sticker placed in the center of the metal chassis, which has all the Toshiba and OCZ branding in addition to the product name. 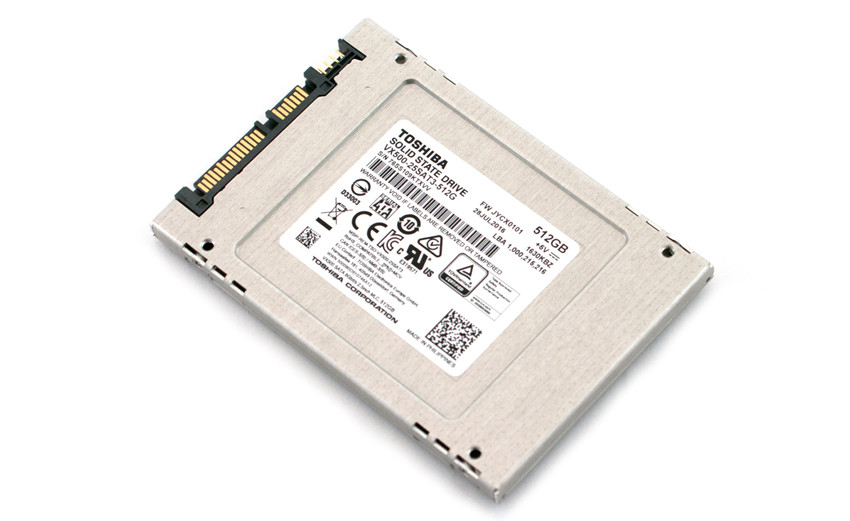 The VX500 also uses crisp edges rather than the smooth, rounded design that was used in the past. 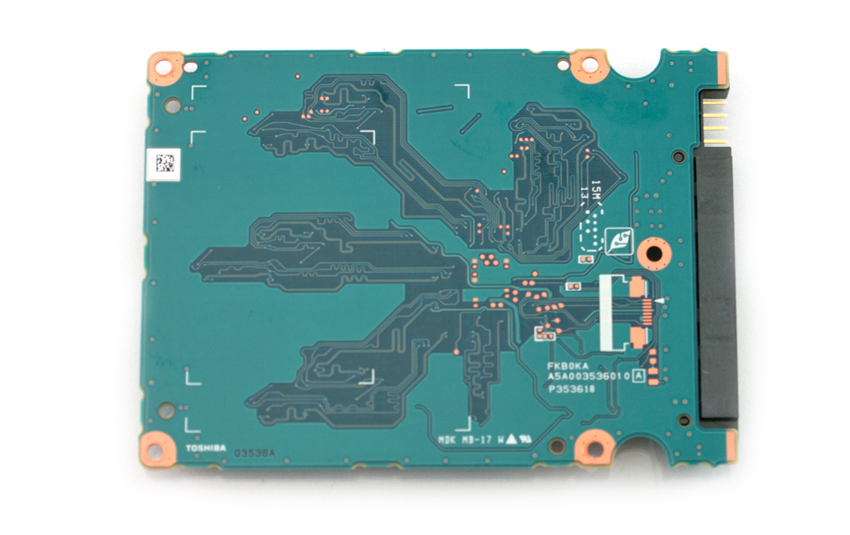 The VX500 leverages a 7mm 2.5-inch form-factor and can be used in a wide range of applications including notebooks and desktop PCs. The front of the drive has the standard SATA power and data interface while service and firmware upgrades are completed through the OCZ Toolbox. 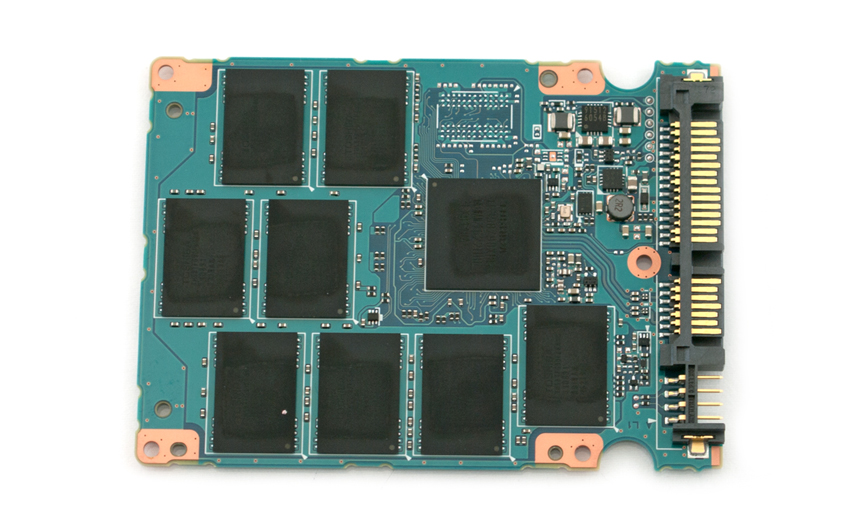 To open the cover, simply remove each of the four screws (located at the corners of the drive) and pry up the cover open revealing the singled-sided PCB. The VX500 is equipped with a Toshiba controller as well as eight pieces of Toshiba MLC NAND, which is tightly packed across the board.

All consumer SSD benchmarks are conducted with the StorageReview HP Z640 Workstation. We compared the Toshiba OCZ VX500 SSD to other high capacity consumer drives, the drive are the following:

When looking at 2MB random transfer performance, the OCZ VX500 fell behind a bit with 477.7MB/s read and 453.2MB/s, which placed it near the bottom of the pack.

Looking at 4K random transfers in MB/s told a similar story, as the OCZ VX500 found itself at the bottom of the leaderboard once again with reads and writes of 19.4MB/s and 102.4MB/s, respectively. 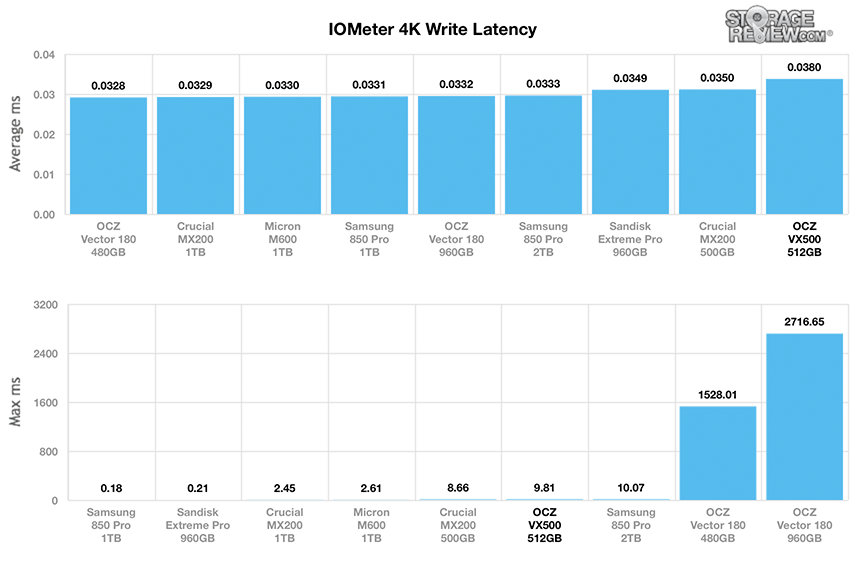 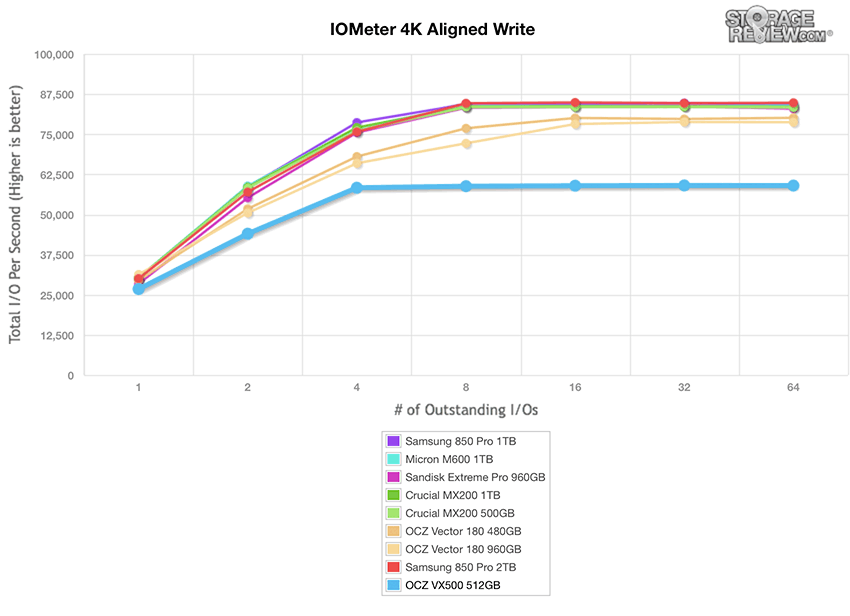 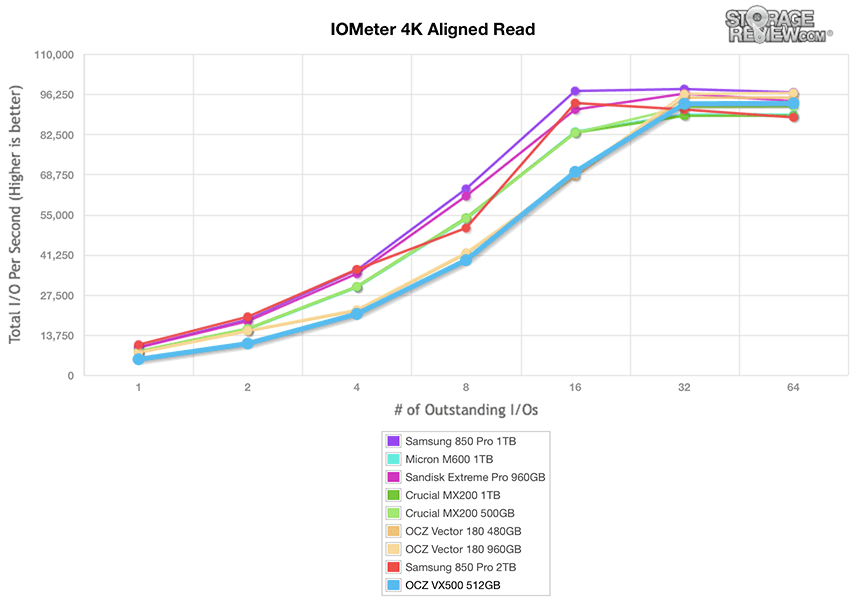 Our last series of synthetic benchmarks compare the hard drives in a series of server mixed-workloads with a queue depth of ranging from 1 to 128. Each of our server profile tests has a strong preference towards read activity, ranging from 67% read with our database profile to 100% read in our web server profile. In all of our mixed workloads, the VX500 drives performed very well.

The first is our database profile; with a 67% read and 33% write workload mix primarily centered on 8K transfer sizes. In the scenario, the VX500 showed some excellent performance in the terminal (Q128), with an IOPS of 53,473.40. These results placed it among the leaders. 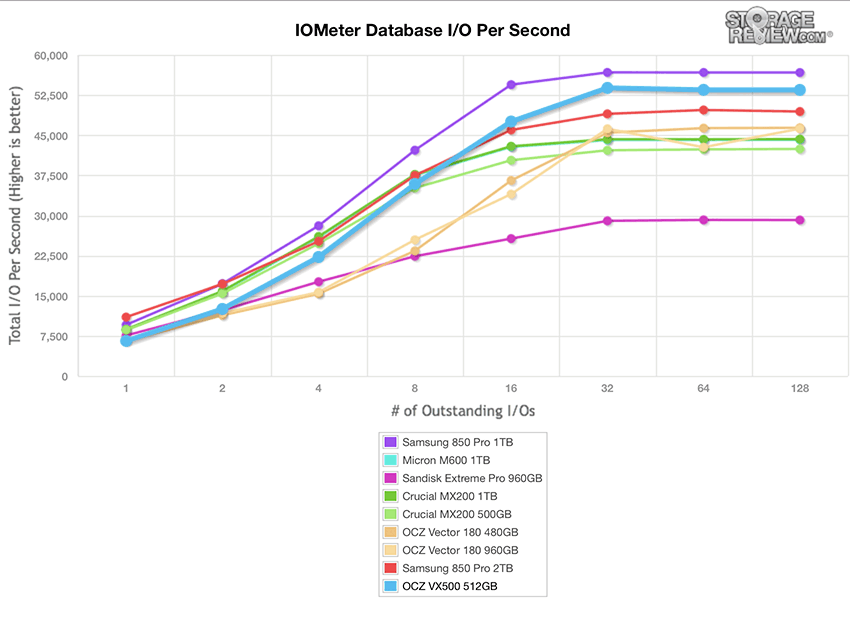 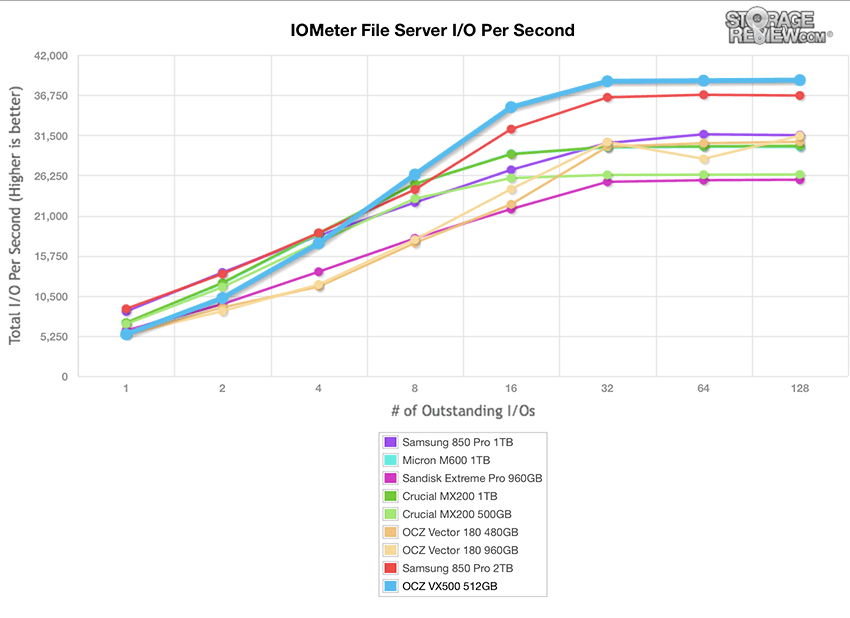 Our web server profile is read-only with a spread of transfer sizes from 512-byte to 512KB. The VX500 continued its excellent performance during our server mixed-workloads with an impressive range of 5,459.01 IOPS and 38,714.06, which was good enough for top spot among the leaderboard. 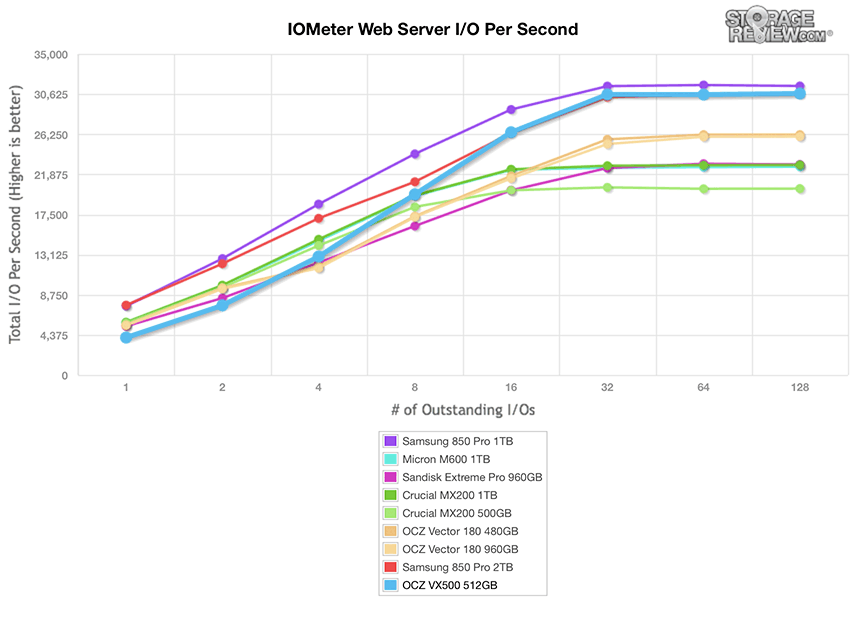 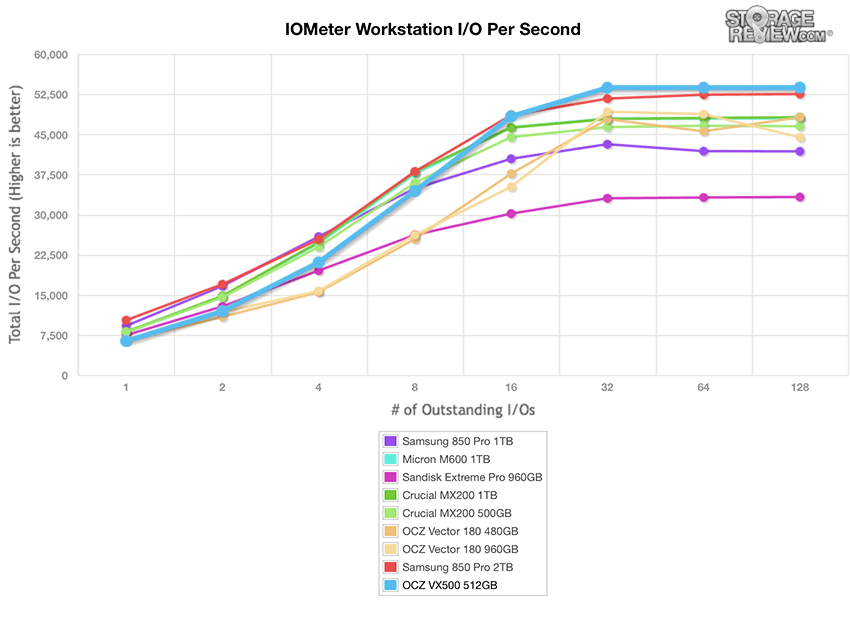 In our HTPC profile, the OCZ VX500 512GB outperformed the other tested consumer drives quite handedly with an impressive 8,902.27 IOPS, 411.6MB/s and 0.786ms in average latency. The next best drive was the SanDisk Extreme Pro 1TB, thought it didn’t really come close to catching OCZ’s new drive. 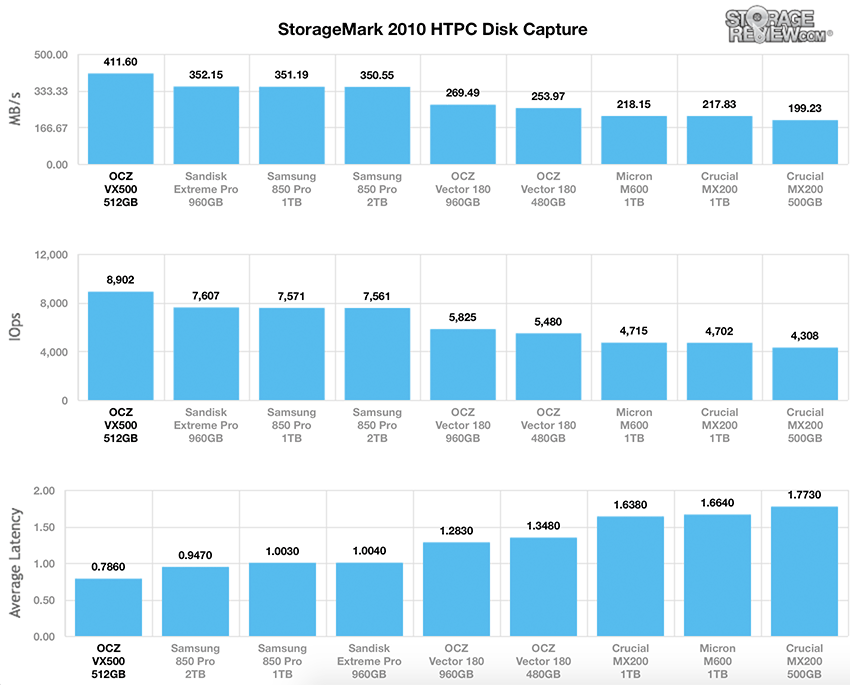 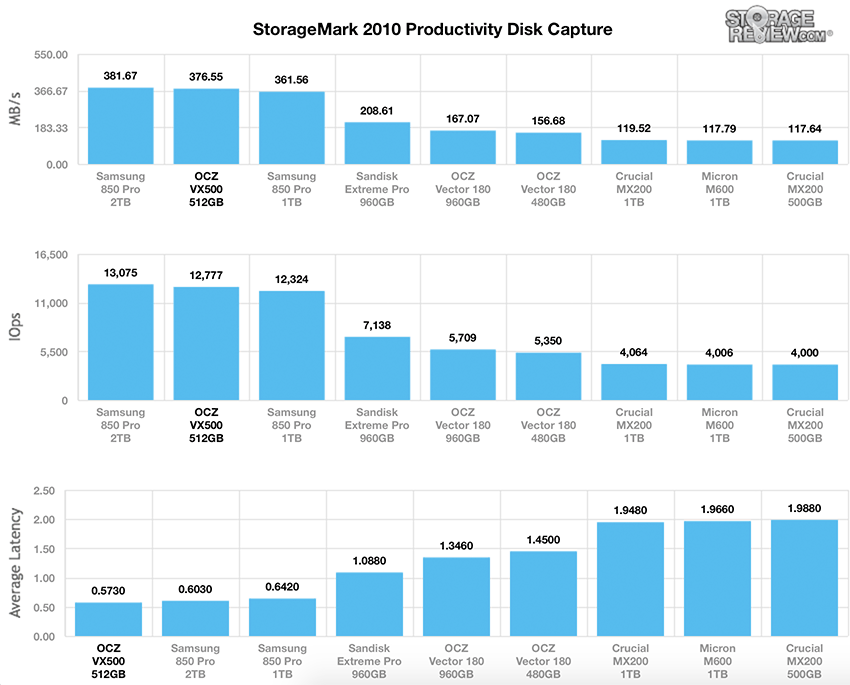 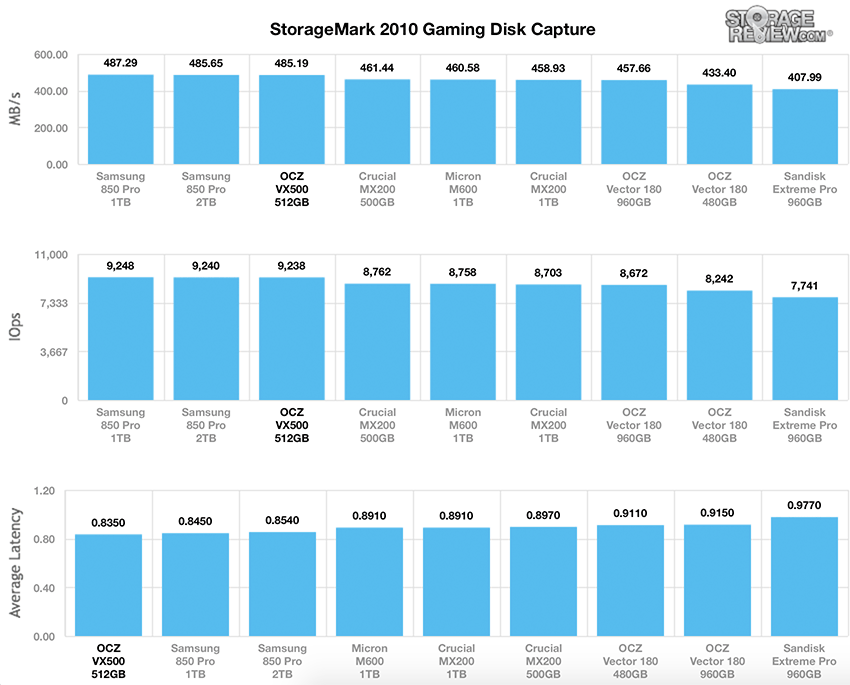 The Toshiba OCZ VX500 Series is a mid-range consumer SSD that offers users an effective and affordable way to upgrade their desktops or notebooks to solid-state technology without having to buy a lower performing entry-level drive. Touted as the direct replacement for their Vector 180 line, the VX500 offers good endurance coupled with a fantastic warranty plan. This competitively priced consumer SSD goes for a solid $0.30/GB for the 512GB offering, making the Toshiba’s VX500 a great addition to the OCZ portfolio of consumer drives. It certainly enables it to stand out in the crowded consumer SSD market.

Though its performance during our 4K tests was more or less forgettable (i.e. it was consistently near or at the bottom of the leaderboard), the VX500 certainly revealed itself as a powerhouse during our other benchmarks. This was highlighted by our server mixed-workloads, where it gave the best overall performance and was consistently the leader (or among the leaders). For example, in our database profile, the OCZ drive showed excellent results with an IOPS of 53,473.40 in the terminal, while delivering a range of 40,83.96 IOPS and 30,693.12 IOPS in our file server profile. Moreover, it finished very strong during our workstation activity benchmark, posting a range of 6,348.66 IOPS and 53,727.5 IOPS for top honors.

This excellent performance continued into our real-world consumer tests, which showed the drive at the top of our leaderboards in all three categories. During our HTPC workload, the OCZ VX500 easily outperformed the other tested drives with 8,902.27 IOPS, 411.6MB/s and 0.786ms in average latency. The OCZ VX500 showed another strong performance with our productivity trace, posting 12,776.79IOPS, 376.55MB/s and 0.573ms in average latency, while our read-intensive gaming trace recorded a notable 9,238.07 IOPS, 485.19MB/s and 0.835ms in average latency. This impressive real-world performance makes this a compelling choice for consumers looking to upgrade (even those who might already leverage SSD technology).

The Toshiba OCZ VX500 Series is a solid addition to the company’s line of consumer drives, offering a blend of affordable price tag, great performance, and the company’s incomparable Advanced Warranty program.