The QNAP TS-453D is a 4-bay NAS that is designed to take advantage of faster speeds from 2.5GbE connections and extend those benefits to the devices connected to it. QNAP has made several changes recently to push the networking speeds form 1GbE to 2.5GbE connections through NAS, switches, and AICs. The TS-453D is yet another device that will help users past the networking bottleneck to faster connectivity speeds.

The QNAP TS-453D is a 4-bay NAS that is designed to take advantage of faster speeds from 2.5GbE connections and extend those benefits to the devices connected to it. QNAP has made several changes recently to push the networking speeds form 1GbE to 2.5GbE connections through NAS, switches, and AICs. The TS-453D is yet another device that will help users past the networking bottleneck to faster connectivity speeds. 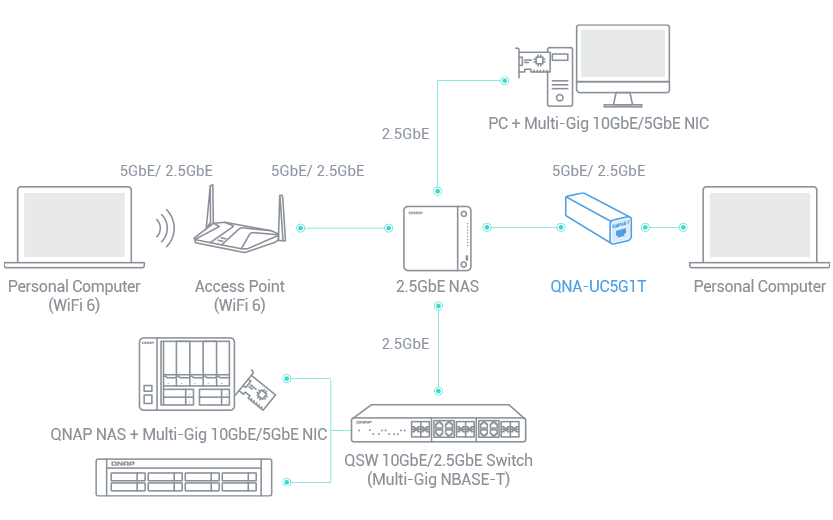 Looking first at networking, the QNAP TS-453D comes with two onboard 2.5GbE RJ45 LAN ports. Users can take their existing CAT5e cables and upgrade network connections from 1GbE to 2.5GbE. If 2.5GbE isn’t enough, through port trunking users can bump that up to 5GbE. To help hit those speeds, the NAS leverages an Intel Celeron J4125 quad-core 2.0 GHz processor. On top of that, the NAS can have up to 8GB of DDR4 memory for even faster performance. 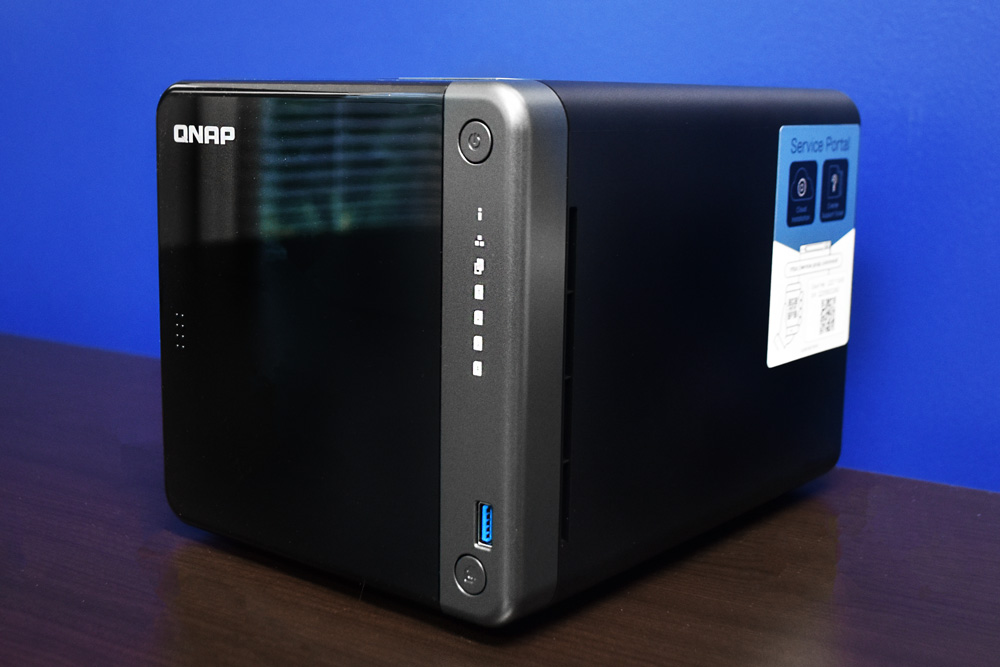 QNAP includes a PCIe expansion slot that can be used to add something like a 10GbE card for those looking to use the NAS for virtualization, fast backup and restores, and huge data transmissions. Faster connectivity lends itself well to Hybrid Backup Sync (HBS) to transfer data to local, remote or cloud storage spaces while using the company’s QuDedup, data reduction.

For storage the TS-453D has 4 3.5″ SATA bays. The NAS has an SSD caching capability, but to leverage it without giving up drive bays, users would need to utilize a PCIe adapter card for M.2 drives in the single PCIe slot. However, adding in SSDs can add several benefits such as flash volumes,  SSD cache acceleration, and Qtier auto-tiering for overall better performance. If the four bays aren’t enough, one can add more storage through a USB 3.2 Gen 2 port to provide fast JBOD expansions.

The QNAP TS-453D is a compact, tower form factor NAS. It is small enough to sit on a desk without being too intrusive. The front of the device has a shiny plastic cover with company branding that covers the drives bays. The cover slides off easily to access the toolless, hot-swap drives underneath. Along the right side is the power button at the top, the indicator LEDs running down the side, a USB 3.0 port and a USB copy button. 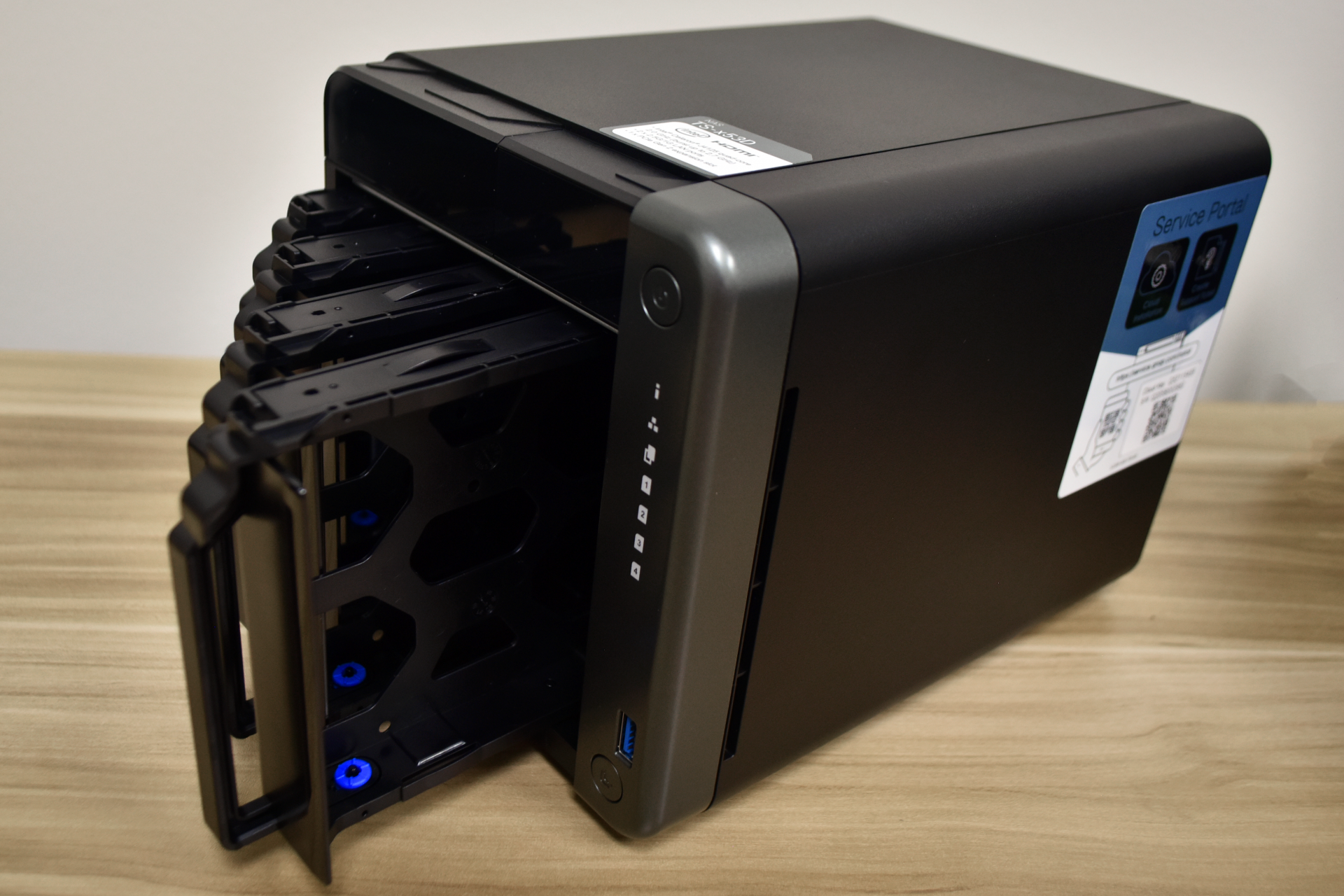 The rear of the device is mainly taken up by the fan. On the left side are the Kensington Security Slot, HDMI port, USB 3.2 Gen 2 port, three USB 2.0 ports, two 2.5 Gigabit Ethernet Ports, and the power connection. Right near the top is where the PCIe expansion slot is for adding cards. 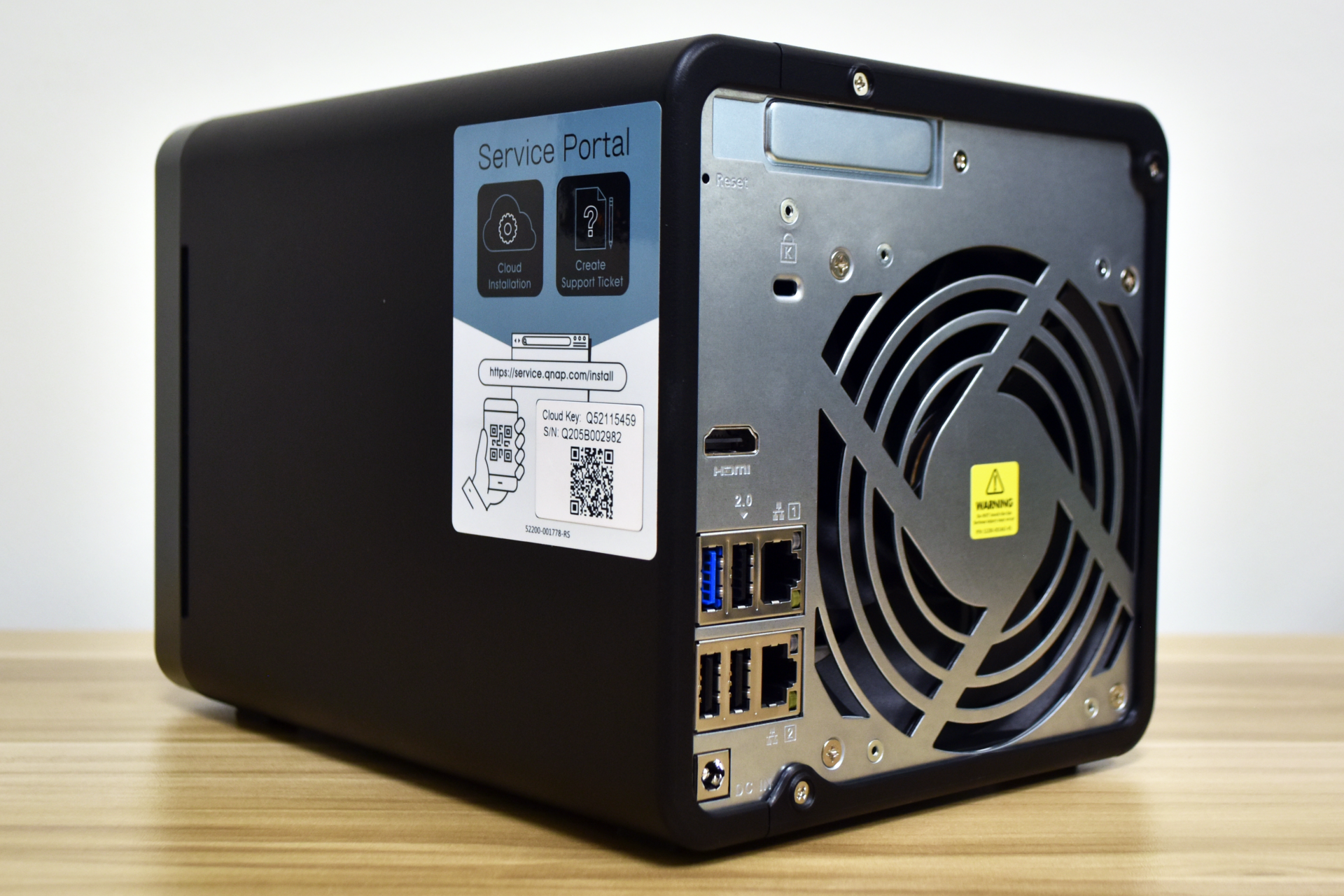 For our testing, we configured the QNAP TS-453D in RAID6 using four WD Red 14TB HDDs in both CIFS and iSCSI configurations. For networking, we leveraged the EnGenius Cloud ECS2512FP Multi-Gigabit Switch.

First up are the enterprise workloads, where we measured a long sample of random 4K performance with 100% write and 100% read activity. For IOPS, the NAS gave us CIFS scores of 292 IOPS read and 669 IOPS write. iSCSI hit 2,553 IOPS read and 444 IOPS write.

Compared to the fixed 16 thread, 16 queue max workload we performed in the 100% 4K write test, our mixed workload profiles scale the performance across a wide range of thread/queue combinations. In these tests, we span workload intensity from 2 thread/2 queue up to 16 thread/16 queues. In throughput, the QNAP was fairly flat in CIFS starting at 178 IOPS and ending at 174 IOPS. There was a big improvement from beginning to end in iSCSI with a start of 372 IOPS and an end at 1,325 IOPS. 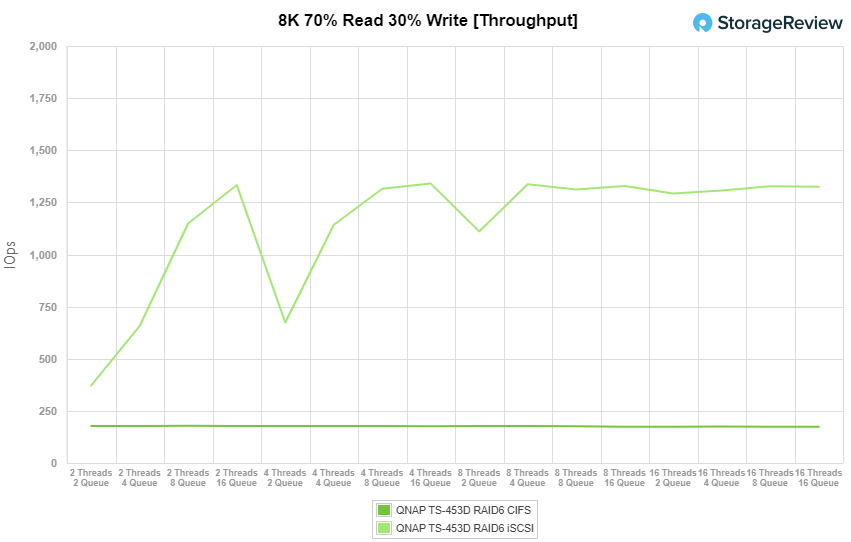 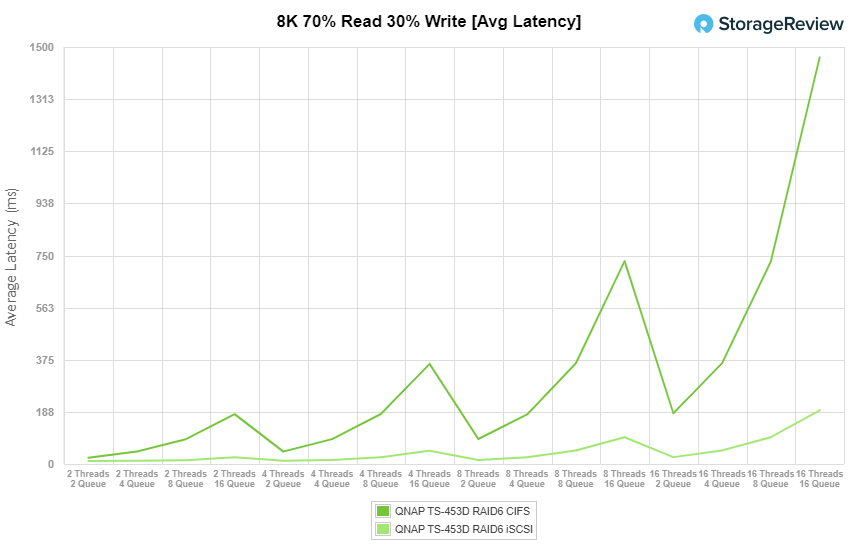 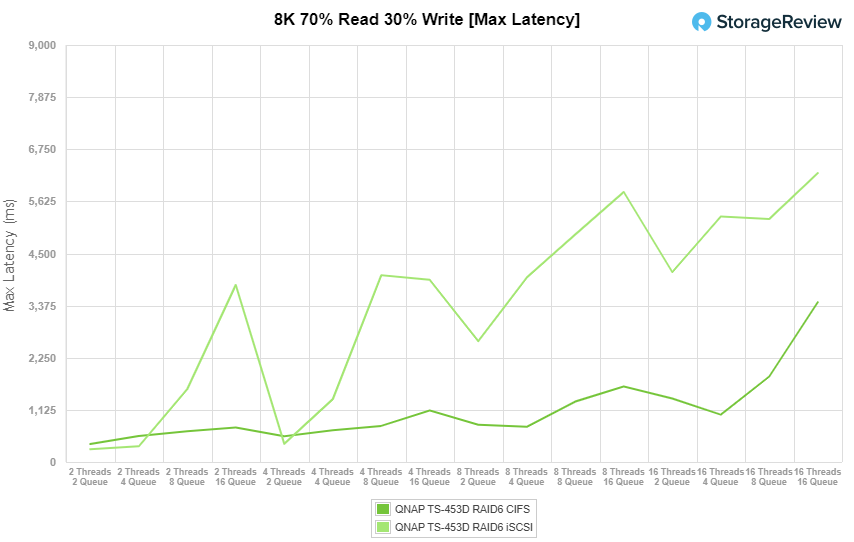 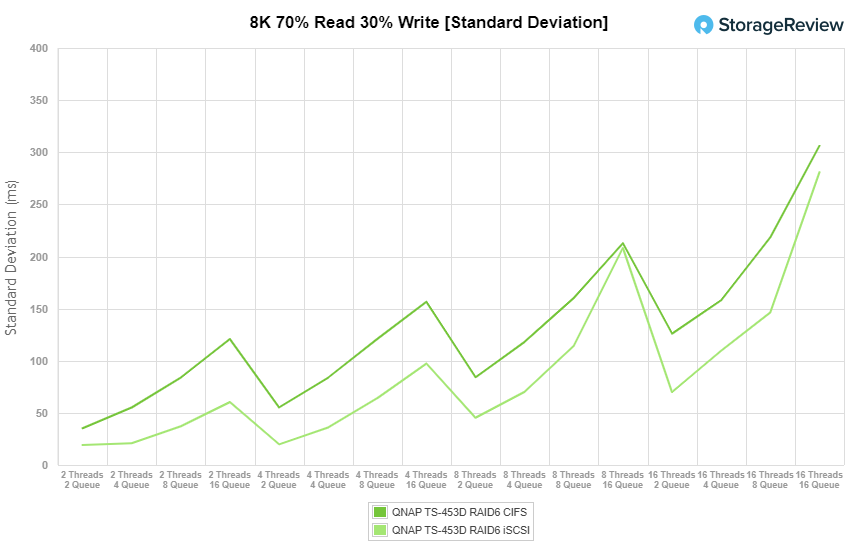 The QNAP TS-453D is a small tower NAS that is all about faster network connectivity. The NAS comes with two 2.5GbE LAN ports onboard with the ability to port trunk up to 5GbE or add a 5GbE or 10GbE port through the PCIe expansion slot. The NAS leverages an Intel Celeron J4125 quad-core 2.0 GHz processor and up to 8GB of DDR4 RAM. There are four, 3.5” storage bays running the capacity up to 72TB as well as a USB 3.2 Gen 2 port to expand to even more capacity. For caching, users can leverage two of the bays with SSDs or utilize the PCIe slot for M.2 flash storage.

2.5GbE connectivity can definitely add benefits to a NAS, particularly as we saw in 128K large block transfer. The QNAP TS-453D can remove the network bottleneck in NAS usage while providing ample features for most small to medium office users.