With the release of newer AMD Ryzen motherboards, PCIe Gen4 SSDs followed suit and gradually started to hit the market. It was only a matter of time before Samsung made its first appearance in this category, which they’ve done today. The Samsung 980 PRO PCIe 4.0 NVMe SSD, is a client SSD that features the company’s V-NAND 3bit MLC technology and a newly-developed, in-house Elpis SSD controller. The company’s first PCIe 4.0 drive is designed for high-end PCs, workstations, and game consoles, and is available in capacities ranging from 250GB to 2TB (though the largest model does not have a release date as of the publication of this review).

With the release of newer AMD Ryzen motherboards, PCIe Gen4 SSDs followed suit and gradually started to hit the market. It was only a matter of time before Samsung made its first appearance in this category, which they’ve done today. The Samsung 980 PRO PCIe 4.0 NVMe SSD, is a client SSD that features the company’s V-NAND 3bit MLC technology and a newly-developed, in-house Elpis SSD controller. The company’s first PCIe 4.0 drive is designed for high-end PCs, workstations, and game consoles, and is available in capacities ranging from 250GB to 2TB (though the largest model does not have a release date as of the publication of this review). 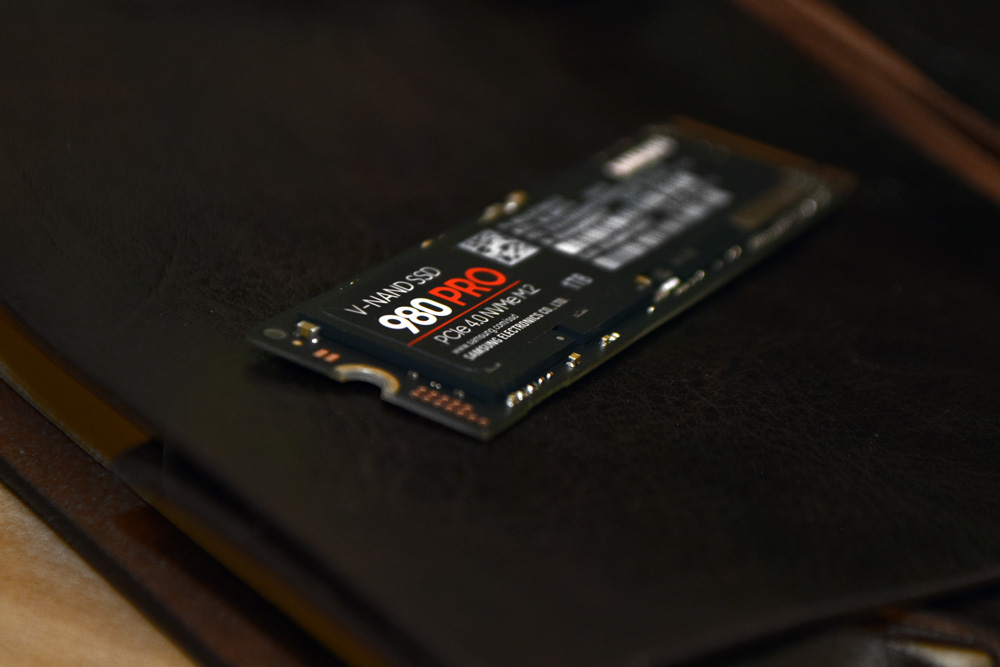 Like the few others we’ve reviewed, the new PCIe Gen4 x4 NVMe 1.3 interface is quoted to deliver some very impressive numbers. Samsung indicates that the 980 Pro can reach up to an unprecedented 7GB/s in sequential read and 5GB/s in sequential write. Random reads and writes have the potential to hit the million IOPS mark in throughput (at Q32T16).

Though this quoted performance from Samsung is very exciting, users will need a compatible system to reach these numbers. Moreover, both the Xbox Series X and PS5 will feature PCIe 4.0 compatibility for those who want the most out of their next-gen console. Hardcore gamers will certainly be looking for more options in the near future (specifically the PS5, which indicates support for 3rd-party NVMe PC drives). That said, consoles use custom hardware and components, so it’s really hard to anticipate how non-propriety drives will perform in these next-gen consoles. 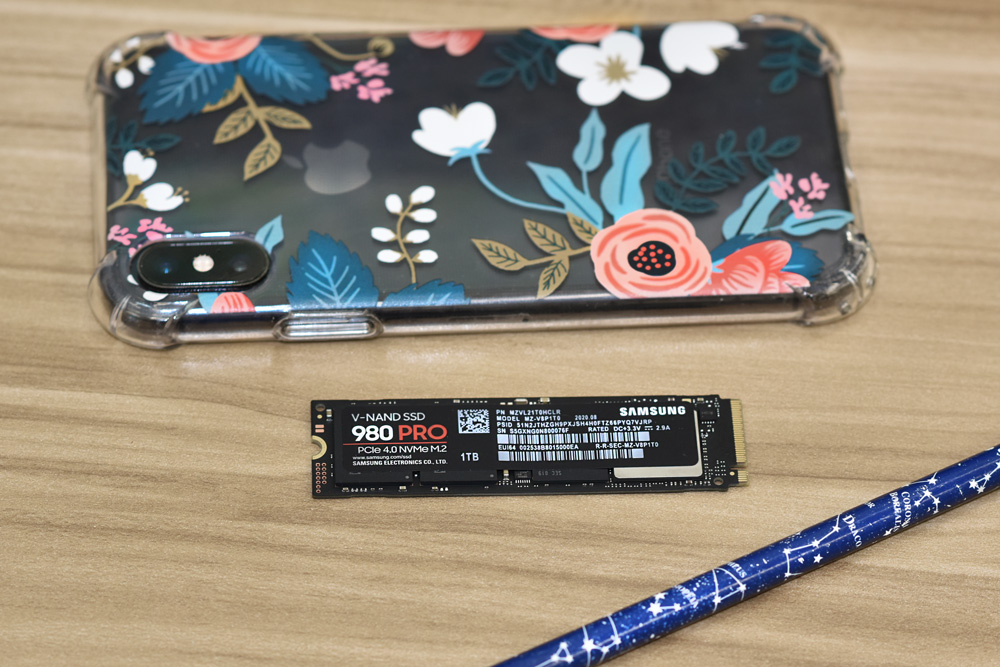 There are a few important and unique features of the Samsung 980 Pro that are worth mentioning. First is that the new drive uses the company’s sixth-generation V-NAND, which Samsung states as having a 40% increase in cells over the previous 9x-layer single-stack structure. This is due to its electrically conductive mold stack of more than 100 layers. Its vertically piercing cylindrical holes (from top to bottom) creates uniform 3D charge trap flash (CTF) cells.  In addition, the 6th gen NAND uses a “speed-optimized” circuit design, which translates to noticeably faster data transfer speeds compared to the 5th generation (i.e., less than 45μs for reads and less than 450μs for writes). This allows for 10% or more improvement in performance and a 15% reduction in power consumption.

The new Samsung drive is also equipped with a range of features focused on keeping it cool and running smoothly. For example, its built-in advanced thermal control solutions allow for the drive to perform well at cool temperatures, while its Dynamic Thermal Guard (DTG) technology proactively helps prevent overheating. Moreover, its heat spreader features an integrated thin copper film (and a nickel coating on the new Elpis controller), both of which promote fast heat dissipation during heavy workload use.

For data reliability, the Samsung 980 Pro is specced with endurance up to 1,200TB written (2TB capacity) and an MTBF of 1.5 million hours for all models. As seen below, Samsung figured the 600TBW available in the 1TB capacity will meet the needs of 99.7% of the users out there.

As we migrate into testing newer NVME Gen4 SSDs, it required a platform shift in our lab to support the newer interface. Lenovo has been out in the front of the pack with PCIe Gen4 support, including up to the front-mount U.2 bays, while others still only offer edge-card support. In our Gen4 reviews, we leverage the Lenovo ThinkSystem SR635 server, equipped with an AMD 7742 CPU and 512GB of 3200Mhz DDR4 memory. NVMe is tested natively through an M.2 to PCIe adapter card in the edge-card slot, while U.2 drives are loaded in the front. The methodology used better reflects end-user workflow with the consistency, scalability, and flexibility testing within a virtualized server offers. A large focus is put on drive latency across the entire load range of the drive, not just at the smallest QD1 (Queue-Depth 1) levels. We do this because many of the common consumer benchmarks don’t adequately capture end-user workload profiles. 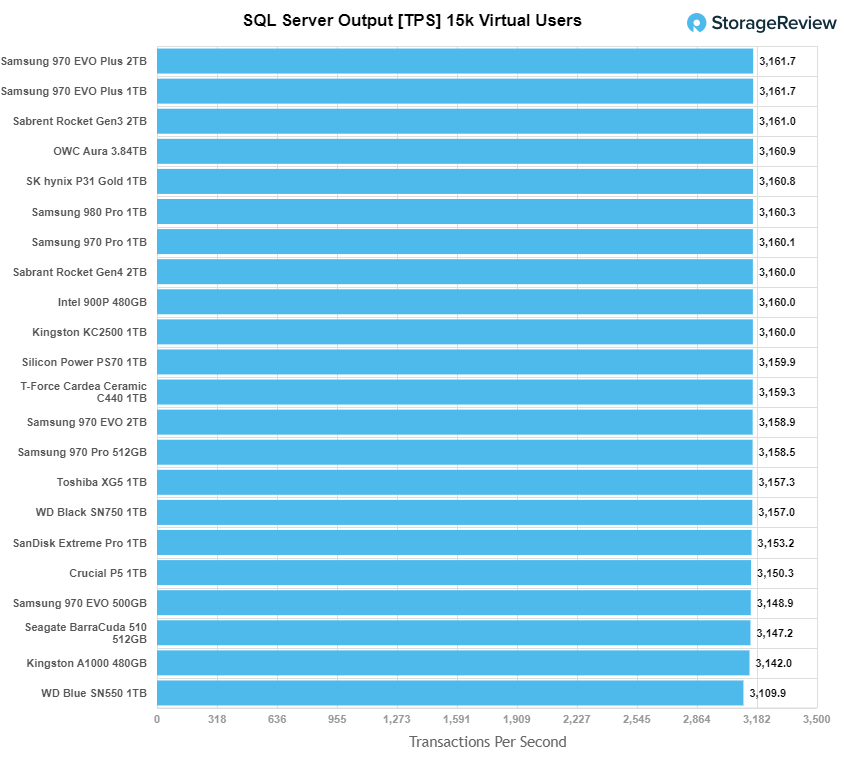 Moving on to latency, the Samsung 980 Pro drive posted just 3.0ms, which placed it at the top of the leader board alongside its predecessor, the 970 Pro. 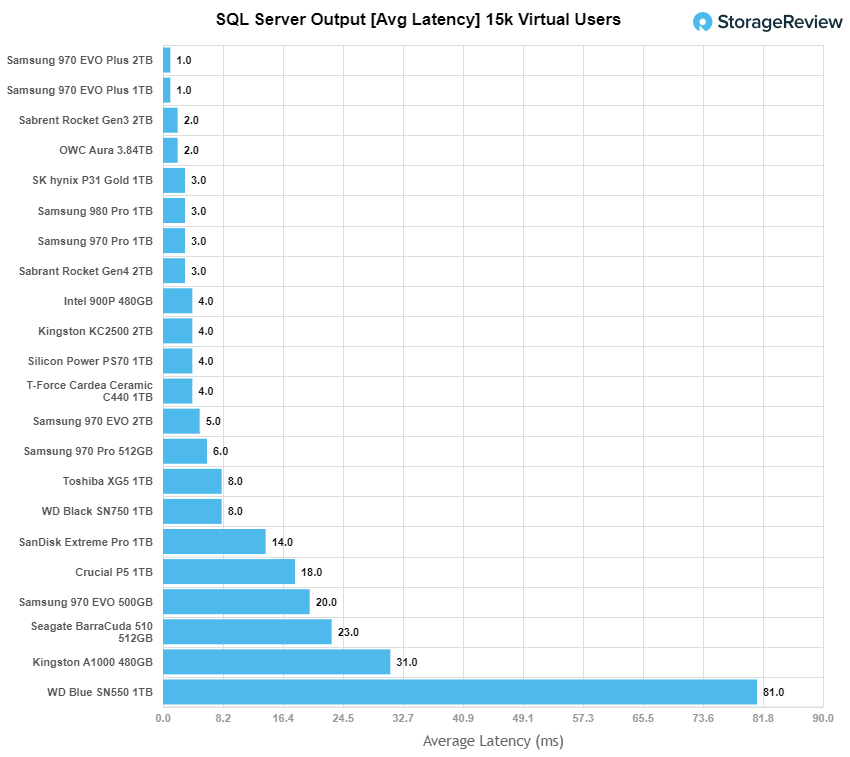 When it comes to benchmarking storage devices, application testing is best, and synthetic testing comes in second place. While not a perfect representation of actual workloads, synthetic tests do help to baseline storage devices with a repeatability factor that makes it easy to do apples-to-apples comparison between competing solutions. These workloads offer a range of different testing profiles ranging from “four corners” tests, common database transfer size tests, to trace captures from different VDI environments. All of these tests leverage the common vdBench workload generator, with a scripting engine to automate and capture results over a large compute testing cluster. This allows us to repeat the same workloads across a wide range of storage devices, including flash arrays and individual storage devices. Our testing process for these benchmarks fills the entire drive surface with data, then partitions a drive section equal to 5% of the drive capacity to simulate how the drive might respond to application workloads. This is different from full entropy tests which use 100% of the drive and take them into a steady state. As a result, these figures will reflect higher-sustained write speeds. Additionally, as VDBench operates with synchronous I/O in Linux versus asynchronous I/O, some of the performance data will differ between the data we collect and what is published in spec sheets. The important part to consumer though is that test data is comparable from the same test conditions, be it VDBench versus VDBench, IOMeter vs IOMeter, or FIO vs FIO.

In 4K random read, the Samsung 980 Pro was the best performer by a wide margin, posting a peak performance of 545,687 IOPS at a latency of 232.5µs before a slight spike at the end.

In 64K sequential writes, we again saw the new Samsung drive with significantly better results compared to the other PCIe Gen4 drives. Here, peak performance hit around the 27K IOPS mark (1.7GB/s) at 583.1µs (before falling off slightly at the end), which was essentially double the speed of the next best drive.

Next, we looked at our VDI benchmarks, which are designed to tax the drives even further. In Boot, the Samsung 980 Pro peaked at 132,962 IOPS with a latency of 358.6µs before it fell off slightly at the end.

Looking at our VDI Initial Login, the 980 Pro showed a big spike in performance around the 65K IOPS mark, though it evened out at the end with a peak of 82,015 IOPS and a latency of 361.8µs, easily take the top spot.

In our last test, VDI Monday Login, the 980 Pro showed a peak IOPS at 23,814 IOPS and 696.4µs in latency, which moved it back some on the leader board for the first time.

The Samsung SSD 980 Pro is the latest consumer-grade SSD to hit the PCIe Gen 4×4 market, featuring the company’s V-NAND 3bit MLC technology, an all-new Elpis controller, backward-compatibility with PCIe 3.0, and NVMe 1.3 support. The 980 Pro is targeted at gamers and professionals with high-end machines as well as prosumers looking to leverage the latest and greatest in SSD technology. 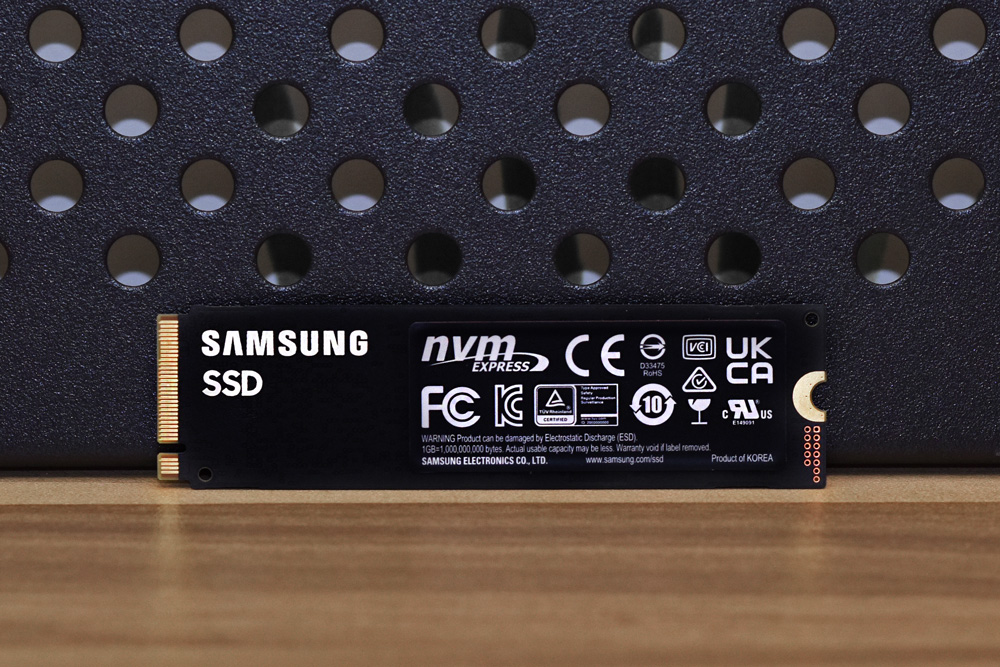 The new Samsung SSD uses the company’s sixth-generation V-NAND, which Samsung offers a 40% increase in cells over the previous 9x-layer single-stack structure. The SSD also leverages newly enhanced Intelligent TurboWrite 2.0 technology, which greatly increases the drive buffer size. As far as reliability goes, it features endurance up to 1,200TB written (for the 2TB capacity) and an MTBF of 1.5 million hours for all models. 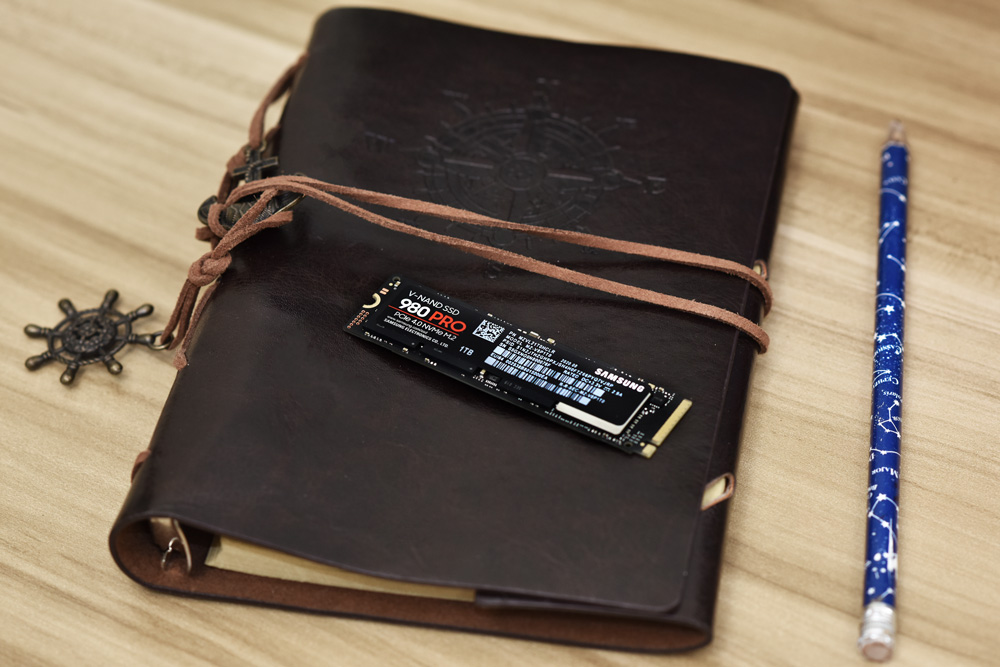 The Samsung SSD 980 Pro is the best-performing consumer drive we’ve tested to date, it more than doubled the numbers of its competitors in some areas. The largest gain over the competition we’ve tested so far in the Gen4 category is the Pro’s write performance, in both 64K sequential and 4K random. It will be interesting to see how the upcoming PlayStation 5 and the Xbox Series X/S will handle non-propriety PCIe 4.0 drives as well, as gamers are going to want to squash game loads with a drive like this. Of course in the PC world, new AMD systems are rolling out that will let creatives and other professionals take full advantage of the drive.

As far as pricing goes, the Samsung 980 Pro 1TB model goes for roughly $230 (and $150/$90 for the 500GB/250GB models), which is noticeably more than the $176 and $160 price tags for the 1TB Silicon Power US70 and Sabrent Rocket drive, respectively. Though the price gap is noticeable, you definitely get what you pay for in this instance. The 980 Pro is a must-buy premium drive and is certainly worth dishing out the extra ~$50, especially if for enthusiasts who have a system that supports the technology.