The QNAP TS-470 is a 4-bay NAS designed for SMB use (its sibling the TS-470 Pro is aimed at SOHO environments). Under the hood, the TS-470 offers high performance, powered by a dual-core Intel 2.6GHz processor and 2GB of DDR3 RAM (which can be expanded up to 16GB). Four Gigabit LAN ports (two single onboard and one dual-port gigabit Ethernet PCI-Express card) allow for maximum bandwidth efficiency; additionally, the dual-port NIC can be swapped out with a 10GbE adapter, greatly increasing IOPS throughput. With a mind toward scalability, the TS-470 offers a centralized storage solution for applications and environments with ever-growing storage needs, while also providing a full range of management applications and features through the QTS 4.0 operating system. Emphasis on data security, backup and retrieval, and antivirus also make the TS-470 an ideal choice for those who seek worry-free storage and safeguarding of increasing amounts of data.

The QNAP TS-470 is a 4-bay NAS designed for SMB use (its sibling the TS-470 Pro is aimed at SOHO environments). Under the hood, the TS-470 offers high performance, powered by a dual-core Intel 2.6GHz processor and 2GB of DDR3 RAM (which can be expanded up to 16GB). Four Gigabit LAN ports (two single onboard and one dual-port gigabit Ethernet PCI-Express card) allow for maximum bandwidth efficiency; additionally, the dual-port NIC can be swapped out with a 10GbE adapter, greatly increasing IOPS throughput. With a mind toward scalability, the TS-470 offers a centralized storage solution for applications and environments with ever-growing storage needs, while also providing a full range of management applications and features through the QTS 4.0 operating system. Emphasis on data security, backup and retrieval, and antivirus also make the TS-470 an ideal choice for those who seek worry-free storage and safeguarding of increasing amounts of data. 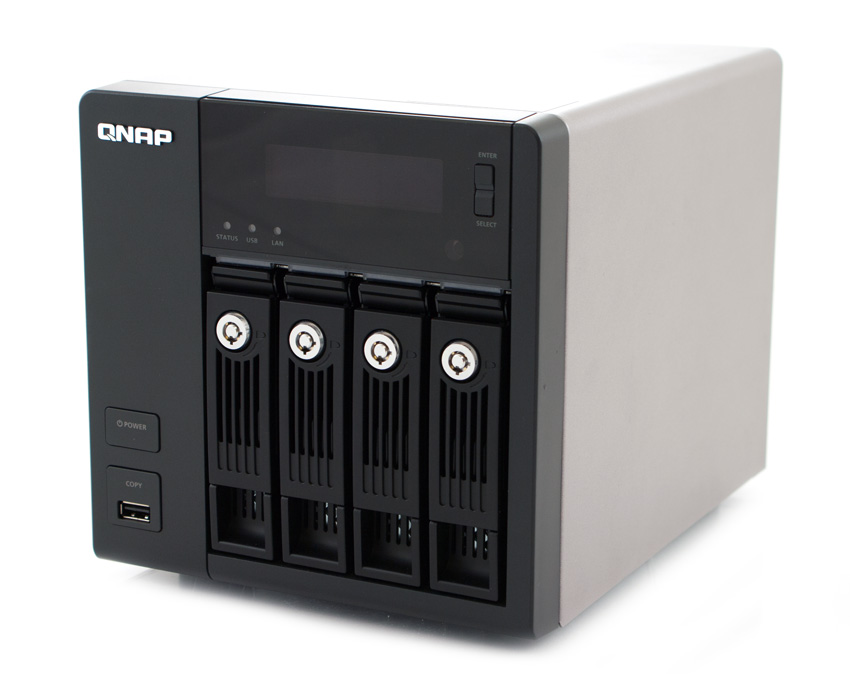 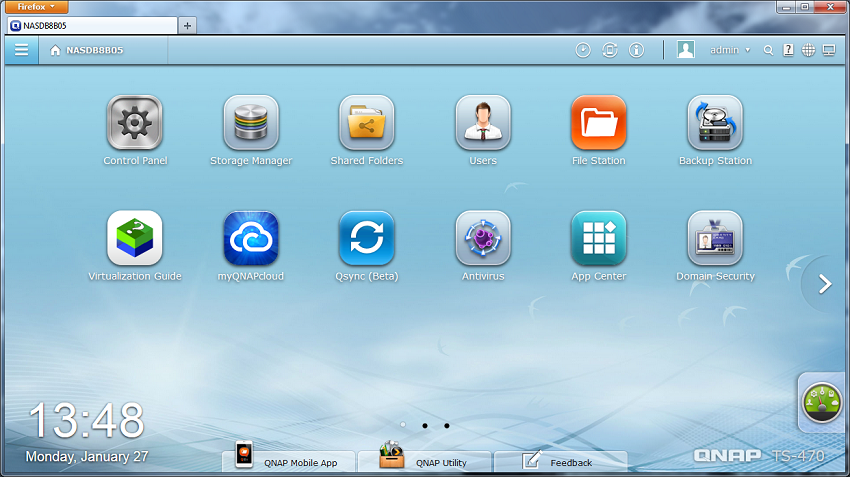 The TS-470 offers a suite of integrated apps right out of the box that make it a powerful and efficient provider of several important business services: built-in proxy and web servers, RADIUS server, VPN, print server, and system log collection. The TS-470’s software suite is just as expandable as its hardware capabilities through the App Center, allowing for the easy acquisition of a host of first-and third-party applications. Integrated IP camera software in the form of Surveillance Station Pro allow for easy management of site security, and is compatible with off-site monitoring on iOS and Android devices. 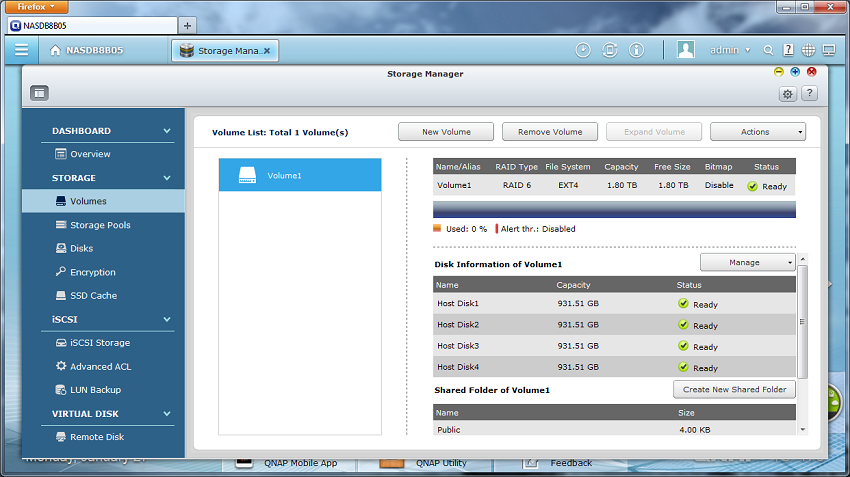 With support for multiple file-sharing protocols (SMB/CIFS, NFS, and AFP), the TS-470 is able to provide a storage solution for Windows, Mac, and Linux-based network environments. File permissions can be integrated fully from already-existing Windows Active Directory and LDAP servers, or created new using the TS-470’s integrated LDAP services application. Using “military-grade” FIPS 140-2 AES 256-bit encryption, the TS-470 offers a highly secure platform for safeguarding data, even in the unfortunate event of theft. These solutions, combined with the TS-470’s built-in antivirus feature, offer effective and efficient protection against intrusion or data loss.

For Windows users, a backup solution (both real-time and scheduled) is offered using the QNAP NetBack Replicator application, while the TS-470 offers Mac users native support for Apple Time Machine. Several third-party backup applications are also supported, including (but not limited to) Symantec Backup Exec and Acronis True Image. The TS-470’s Real-Time Remote Replication allows for data to be backed up on a regular basis to off-site TurboNAS/FTP servers, and cloud storage functionality is supported through Amazon S3, ElephantDrive, Symform, Google Drive, and Dropbox.

As a remote storage platform, the TS-470 comes equipped with the myQNAPcloud application, turning the NAS into a personal internet cloud-storage solution. VPN connections can be created with the TS-470 from anywhere in the world, and a suite of mobile phone applications allow for easy file access (Qfile) and monitoring (Qmanager).

The design of the TS-470 is similar to other 4-bay NAS units we’ve reviewed. Above the four drive bays (each with key lock) is an LCD screen for easy access to system status and notifications. Status LEDs line the space directly underneath the LCD screen, and to the left of the bays are the system power and copy buttons (with USB port for easy flash drive access). 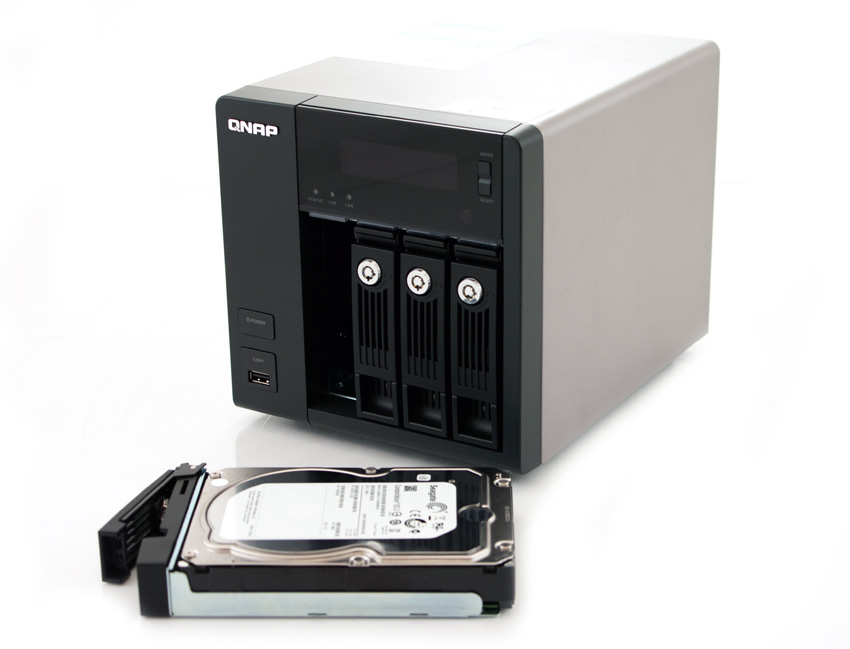 The rear of the unit features the four included Gigabit Ethernet connections — two of which are located in an expansion slot and can be switched out for a 10GbE card. The four USB ports are split between 2.0 and 3.0, and an HDMI port is included for easy display of media on a television, monitor, or projector. Also available are two eSATA ports and two analog audio in/out ports. 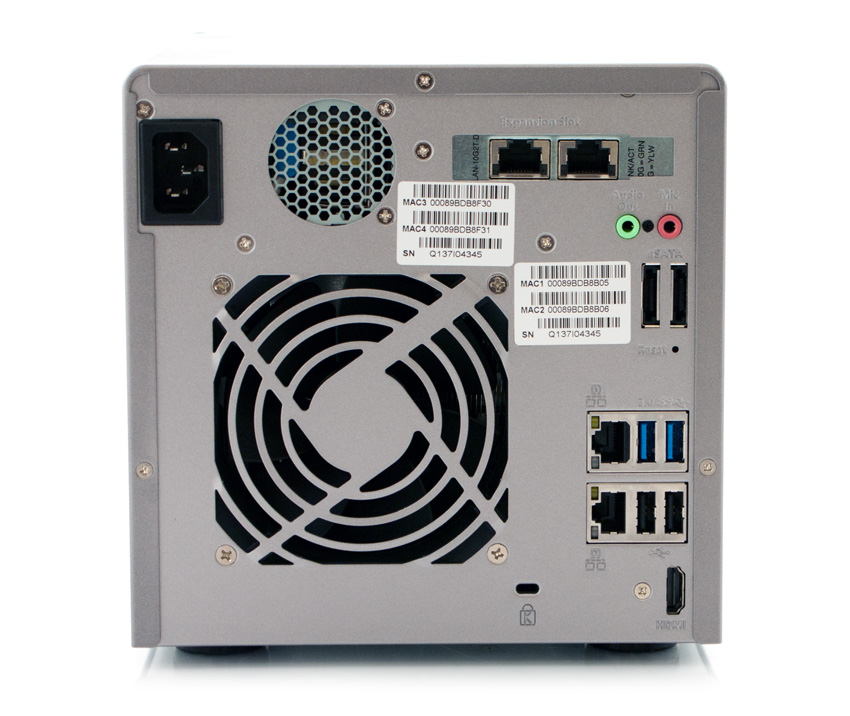 The first in our series of benchmarks measures 4K performance at 100% read/100% write activity. Overall, the TS-470 registered roughly uniform performance across the two drive comparables using both iSCSI and SMB configurations with the included 1GbE network port, reporting just over 300 IOps read/500 IOps write in most cases. The only exception was when we tested the TS-470 using the Seagate ES.3 HDD in iSCSI configuration, where there was a modest sacrifice in read performance (286 IOps) for the sake of greater write performance (803 IOps). Unsurprisingly, when we upgraded the network adapter to 10GbE and switched to a SSD, the performance increased exponentially, with the best performance to be found using iSCSI at 40581 IOps read/29362 IOps write.

The next test measures average latency under the same 100% read/write conditions as the previous benchmark. For our 1GbE comparables, the best read latency (by a narrow margin) goes to the Seagate ES.3 in SMB format at 786.27ms, though it comes at the cost of worst write latency at 495ms. Conversely, the ES.3 drive in iSCSI boasts the best write latency by a sizeable margin (318.46ms) while reporting the worst read latency at 895.2ms. Unsurprisingly, using the 10GbE network adapter with the Micron P400m SSD drive reports the best overall read/write average latency at 6.3ms/8.71ms respectively.

Using the same testing parameters (4k 100% read/write), the Seagate NAS drive using SMB posts the highest maximum write latency of the bunch by a wide margin at 29056ms. In comparison, the Seagate ES.3 in SMB reports slightly better max read latency, and vastly improved write latency at 3321.8ms. The benefit of upgrading to the 10GbE network card and solid-state storage is plain to see in these results, as maximum latency is reduced dramatically.

The next section compares the 100% 16 thread/16 queue workload with a mixed profile of 70% read/30% write across a wide range of thread/queue combinations, from 2/2 all the way to 16/16. In the first mixed profile test, the Seagate NAS drive in SMB configuration records the best overall performance at nearly every depth, though it remains only slightly ahead of the Seagate ES.3 SMB. Conversely, in iSCSI, the ES.3 handily outperforms the Seagate NAS. Looking at the 10GbE/SSD configuration, the Micron P400m NAS offers by far the best throughput in iSCSI, while SMB performance is very stable across all queue depths and still far ahead of the conventional drives. 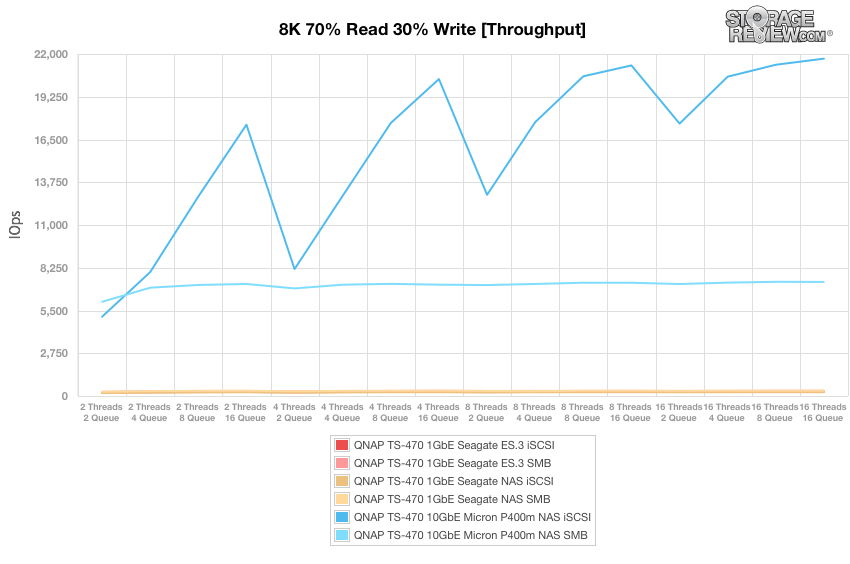 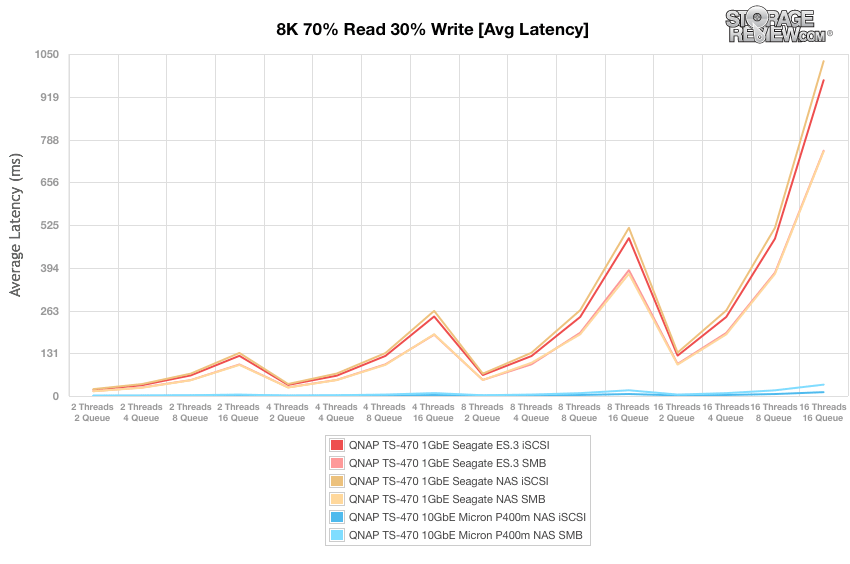 The maximum latency data across all comparables for the 8k 70%/30% benchmark is slightly more difficult to interpret, with the various drive configurations jockeying back and forth in terms of performance. Overall, among the conventional drives the Seagate NAS iSCSI offers the lowest maximum latency across the board, capping out at 4516.33ms at the 16T/16Q level. Notable is the Seagate ES.3, which recorded average performance for most of the test, but overtook the rest once the 16 Thread threshold was reached to come in last at 5345.52ms at 16T/16Q. 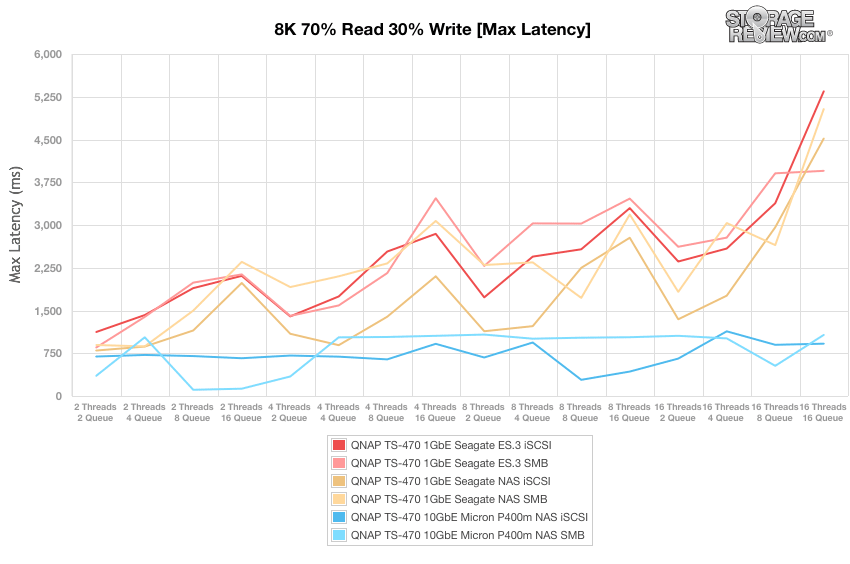 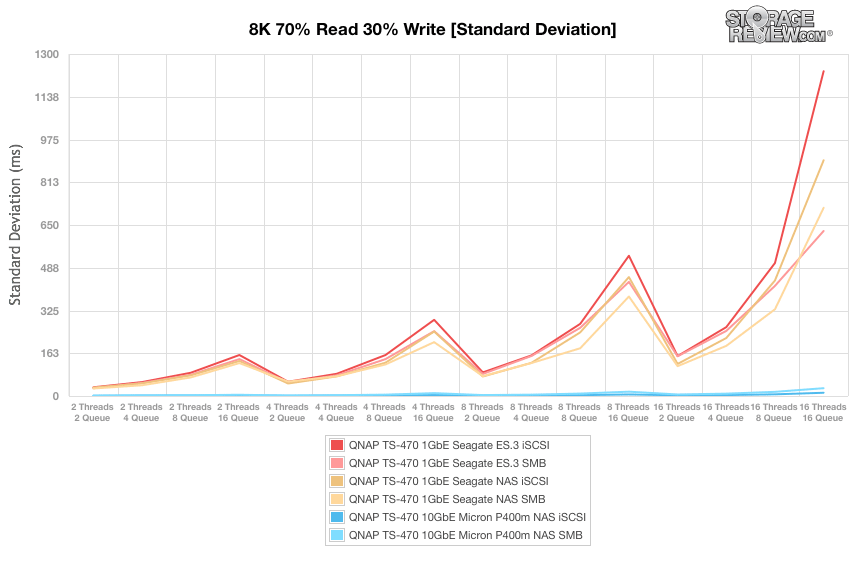 The next test again puts the drives under 100% read/write activity, this time at 8K sequential throughput. For this benchmark, the differences between SSD and HDD/1GbE and 10GbE are much less dramatic. While the Micron P400m NAS with 10GbE network connection is the top performer at 81715 IOps read/61832 IOps write, the difference is much less dramatic compared to the 4k benchmark. The two conventional drives using iSCSI record nearly identical performance, while the Seagate NAS beats all other drives using SMB, including the solid-state drive (50665 IOps read/40740 IOps write).

The final testing benchmark is the 128K transfer test, which aims to demonstrate the highest sequential transfer speed available. Here, the performance of the conventional HDDs is much more uniform compared to previous testing, with none really standing out as clearly superior. For the SSDs running at 10GbE, the Micron P400m NAS iSCSI offers the best bandwidth of all comparables, at 990132 KB/s read and 868750 KB/s write.

The QNAP TS-470 aims to provide a scalable, feature-rich solution for small office environments with ever-increasing storage requirements. With the ability to expand up to 144TB using QNAP’s RAID expansion enclosures, the TS-470 does a great job of addressing the need for growth; additionally, its rich suite of first- and third-party software provides extensive services that will be attractive to a smaller workplace without more complicated infrastructure. While the unit performs well as-is using conventional HDD’s, the addition of SSDs and the 10Gb Ethernet adapter dramatically increase the NAS’s performance and worth, particularly for workplaces that generate projects with hefty storage requirements (for example, video and multimedia editing and recording). The option to expand the unit with the 10GbE adapter means that the unit is fully scalable in terms of both raw storage space or speed (one expansion slot limits this device to either 10GbE or expansion shelf card, not both).

QNAP touts the unit as being designed for SOHO  users and this is reflected in its performance in most of our test results. QNAP’s internal testing also claims that the unit is capable of up to 450 MB/s read and 424 MB/s write, a claim that is confirmed by our own results. In some cases, the TS-470 performed even better than anticipated, recording 461 MB/s read and 457 MB/s write using the Seagate ES.3 in SMB tests over 1GbE. In our own testing, that transfer performance is nearly doubled when utilizing the Micron P400m SSD with QNAP’s optional 10GbE add-on card. With SSDs and a dual-port 10GbE connection, we were able to measure sequential speeds of 990MB/s read and 868MB/s write as well as random 4K speeds of 40.5k IOPS read and 29.3k IOPS write. This elevates the QNAP TS-470 up out of the consumer space and easily starts making it compete with larger enterprise units in terms of performance. Overall we were very impressed by this 4-bay QNAP model, which stands as the highest performing SOHO NAS we have reviewed to date.