Unitrends offers its backup solution in two options: a virtual appliance and a physical one. We already took a look at the physical appliance, in which we determined that it offers great value from an ROI perspective with its tremendous capacity per dollar ratio as well as a web-based interface that’s intuitive to use. For this review, we will be taking a look at Unitrends Enterprise Backup (UEB), an affordable heterogeneous, enterprise-class, scalable data protection software-only backup solution, which is available as a virtual appliance for Microsoft Hyper-V and VMware vSphere. Additionally, with Unitrends’ Simply Scalable technology, Unitrends Enterprise Backup gives companies an efficient and reliable way to automate regular backups and offers great protection for data and systems residing on virtual, physical and cloud-based infrastructure.

Unitrends offers its backup solution in two options: a virtual appliance and a physical one. We already took a look at the physical appliance, in which we determined that it offers great value from an ROI perspective with its tremendous capacity per dollar ratio as well as a web-based interface that’s intuitive to use. For this review, we will be taking a look at Unitrends Enterprise Backup (UEB), an affordable heterogeneous, enterprise-class, scalable data protection software-only backup solution, which is available as a virtual appliance for Microsoft Hyper-V and VMware vSphere. Additionally, with Unitrends’ Simply Scalable technology, Unitrends Enterprise Backup gives companies an efficient and reliable way to automate regular backups and offers great protection for data and systems residing on virtual, physical and cloud-based infrastructure. 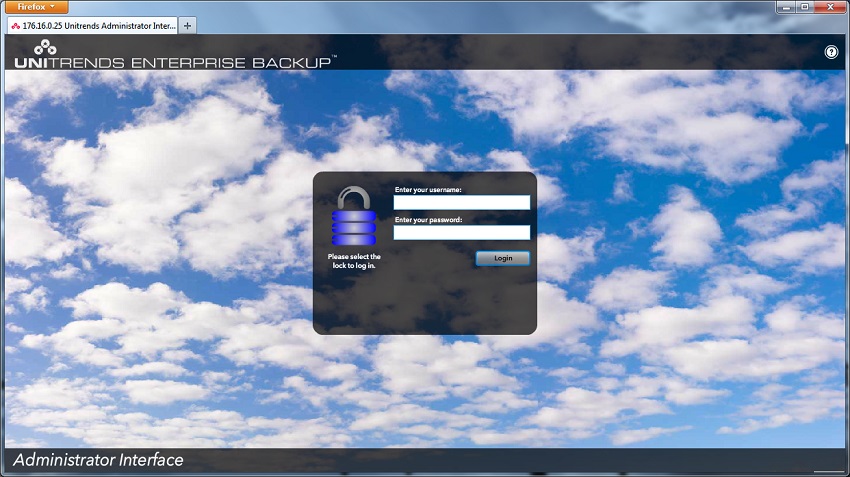 When Unitrends says they offer a heterogeneous solution, they really mean it. UEB supports over 100 versions of servers, storage, operating systems, hypervisors, and applications including NAS, SAN, Windows, Linux, Mac OS X, AIX, Solaris, iSeries, SQL, Exchange, Oracle, VMware, Hyper-V, along with many others. With the plethora of supported environments, optimal data protection has made way for a unique data protection architecture that supports agent-based and agentless protection as well as file- and image-level protection.

Unitrends offers a fully functioning free-edition for up to eight Microsoft Hyper-V and VMware vSphere virtual machines. This is not just trial software; the free-edition license lasts forever, which gives Unitrends a unique marketing ability to maintain a presence in the SMB market. Unitrends Enterprise Backup can be deployed in either Microsoft Hyper-V and VMware vSphere platforms, our review will focus on VMware version deployed in an ESXi 5.1 environment.

Not for Resale (NFR) Edition

We already mentioned one of its most unique features, which its ability to support over a 100 versions of Operating Systems and Applications. Other useful properties of Unitrends Enterprise Backup has includes instant and granular spin-up recovery. Additionally, dissimilar physical and virtual bare metal allows users to perform P2P, V2P, P2V, and V2V recovery. Backups can be performed by users as often as once every 60 seconds. Also featured is Incremental Forever, which will improve recovery point objectives. Users can achieve smaller backup windows and improved network bandwidth efficiency using Near-CDP with up to 10,000 snapshots per week.

With compression and deduplication storage potential can be maximized across multiple storage devices using Unitrends’ advanced storage virtualization and thin provisioning capabilities, which are built-in to their virtual appliances. Additionally, CBT (Change Block Tracking) is supported on both Microsoft and VMware hypervisors to eliminate redundant data.

Before deploying, the following requirements must be met:

While those minimum requirements are needed to perform basic operations, Unitrends does offer a knowledgebase article outlining recommendations for production environments. Some basic tips include monitoring the UEB system load statistics and increasing the CPU and RAM allocation as required. For large production environments allocating as many as 12 CPU cores or upwards of 64GB of RAM might be needed for smooth operation. In the StorageReview lab environment, the UEB implementation has 12 CPU cores and 16GB of RAM, which allows it to handle day to day incremental traffic, but keep up when large changes are made, like imaging new benchmarking suites. 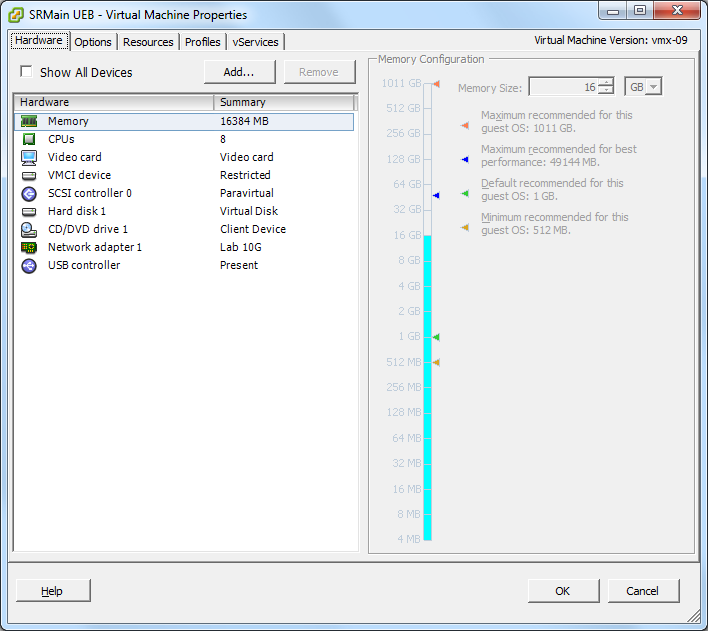 Getting the Unitrends UEB operational takes about 10-15 minutes. Start by downloading the newest pre-built OVA template, log into the ESXi environment through a vCenter client, and deploy the template. Once that is finished, power on the UEB for the first time, accessing it through an ESXi console to set the IP address, and then use a standard web browser for all future management needs. Note that SSH access is available for low-level activities. The first time the UEB is accessed through its WebGUI the user is prompted to name the system, configure storage as well as registering the UEB by applying for a license. During this time clients can also be added, including physical servers and vCenter servers to protect a virtualized environment. 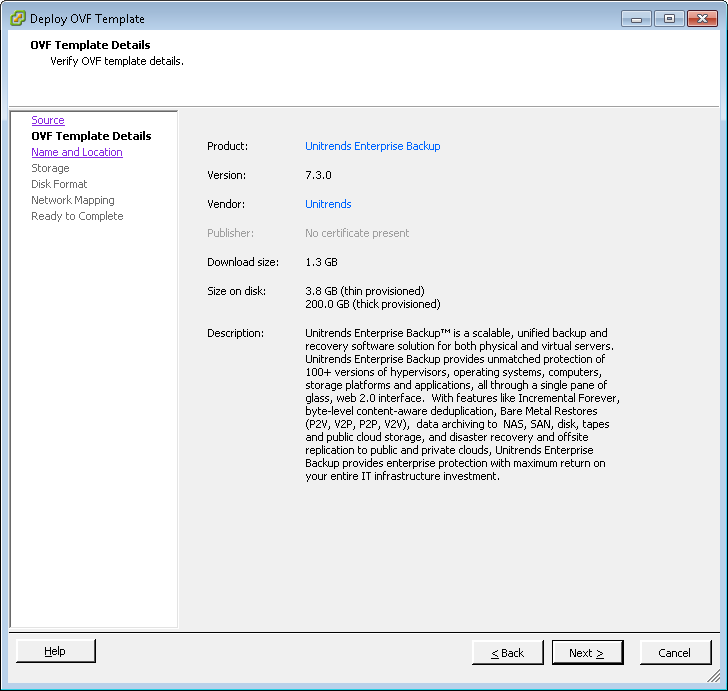 At this point the user can choose to start configuring backup schedules for connected systems or configure local vaulting storage or connections to secondary UEB deployments for replication. In this test configuration, we leveraged a primary UEB located in the enterprise test lab, as well as a replication UEB located in an off-site lab three miles away. The two UEB’s were linked by a 30/30Mb pipe to keep daily backups quickly synced between locations. One unique and very handy feature that Unitrends offers with their physical and virtual backup appliances is RapidSeed to quickly move data to an off-site location at the speed of an external HDD. When you consider that even a basic USB 2.0 port transfers data at ~30MB/s, which is equivalent to a 300Mb upload/download link. Changing that to an eSATA or USB 3.0 drive and it starts to compare to 1-3Gb/s internet links. For a small business getting an off-site replication server operational quickly and without breaking the budget, Unitrends’ RapidSeed capability is a fantastic option.

For the day to day operations of the UEB, all control is handled through a flash-based WebGUI. The interface is easy and intuitive; for both first time users and experienced veterans, the menu structure is simple to route through. The WebGUI is easy enough to get along with but being flash does create issues; RDP clients for some mobile devices can’t keep up with the flash interface. Design-wise the UI is a little dated too, but given where it sits in comparison to other backup solutions, it’s not bad, but it could be modernized. 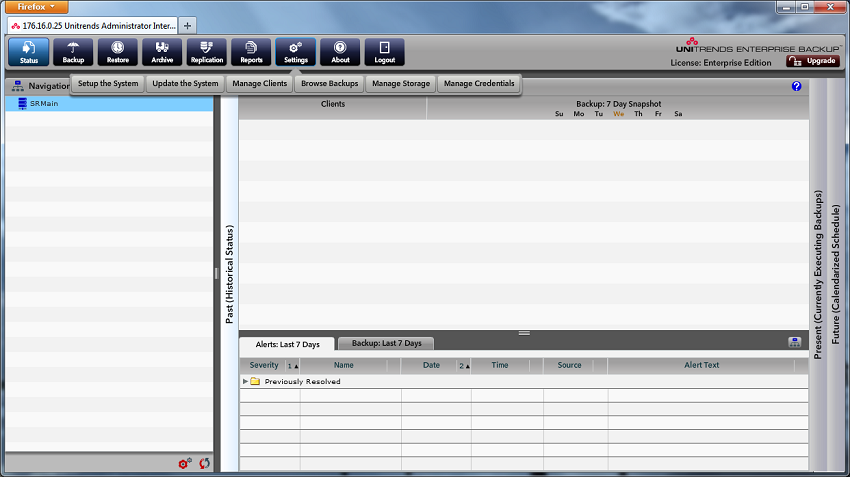 When first logging into the system the activity screen shows a historical view of all past activity, with a calendar heat-map ranging from green to red to indicate successful backups or problems to address. To perform daily tasks such as kicking off backups of new systems or maintaining the scheduling of different systems in the process of getting incremental backups, the process takes only a few clicks. 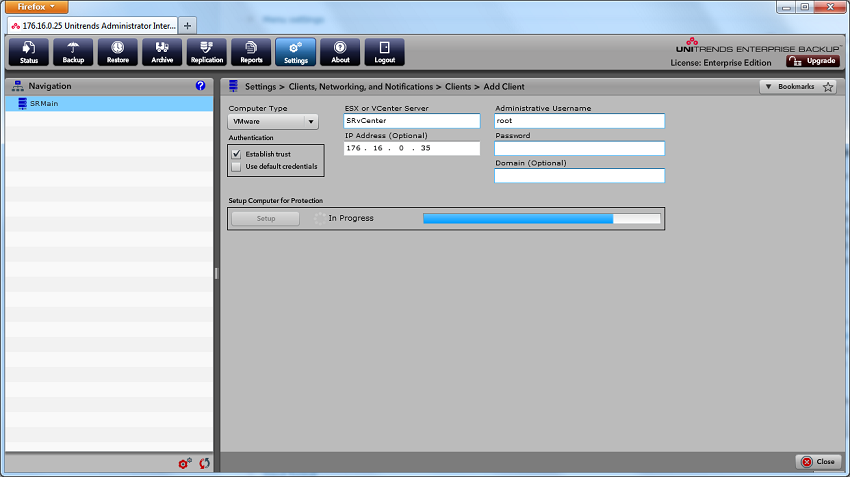 By hovering over the Backup button (or any other menu button) the user is prompted with common tasks for that category. In our case we route through creating a schedule for our Lab’s LoadGen VMs that perform synthetic tests on storage arrays in the lab. 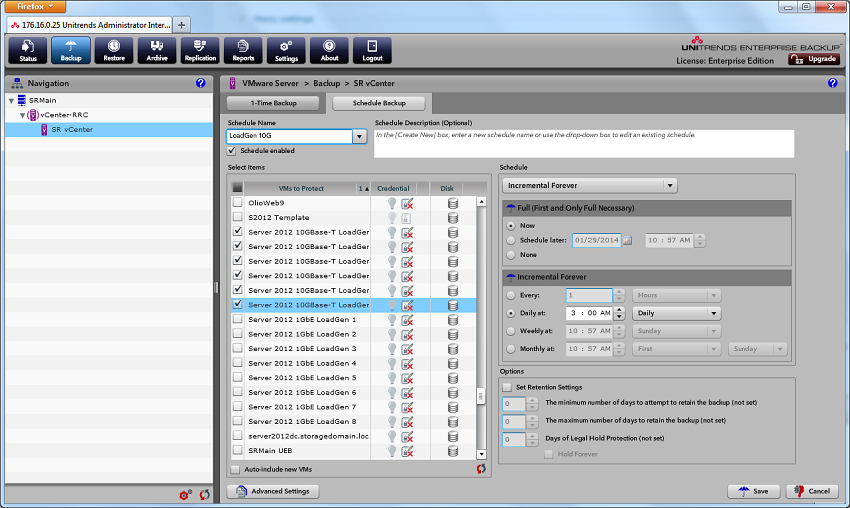 For these VMs, the schedule needed is a master backup at the start and incremental backups on a daily basis. After selecting the VMs in this group and the scheduling items needed, click save and the UEB takes care of the rest. From an IT perspective, the UEB does all the heavy lifting and the user can be the “administrator of many hats” and still keep the production environment safe in the event of a server going down or a storage array crashing.

The true test of any backup solution is how well it performs when it’s needed most; when part of a production environment goes offline. This can be caused by any number of conditions ranging from individual servers failing to a datacenter getting damaged from something as unexpected as an AC unit located above the ceiling flooding the room. In any of these situations IT administrator wants a current backup, and more importantly, a backup that restores successfully. In this test we simulated a SAN failure, taking out our entire local UEB… basically we deleted the entire VM and its datastores and turned to the off-site replication UEB for help. 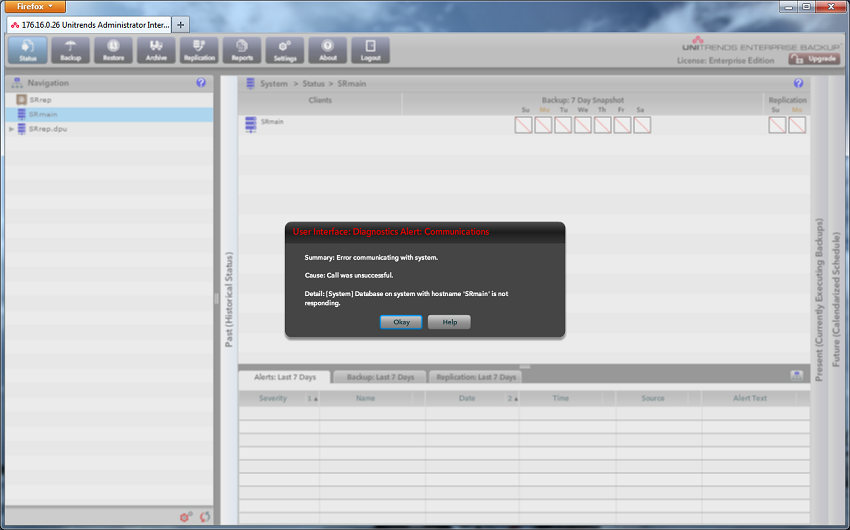 When logging into the replication UEB, the user is prompted with an error indicating the main UEB is down. To begin recovery, the user enables the “show replication view” option, which lets them access stored replicated backups. After this mode is enabled, you can browse the remote backups and restore them as if they were originally created on that server. 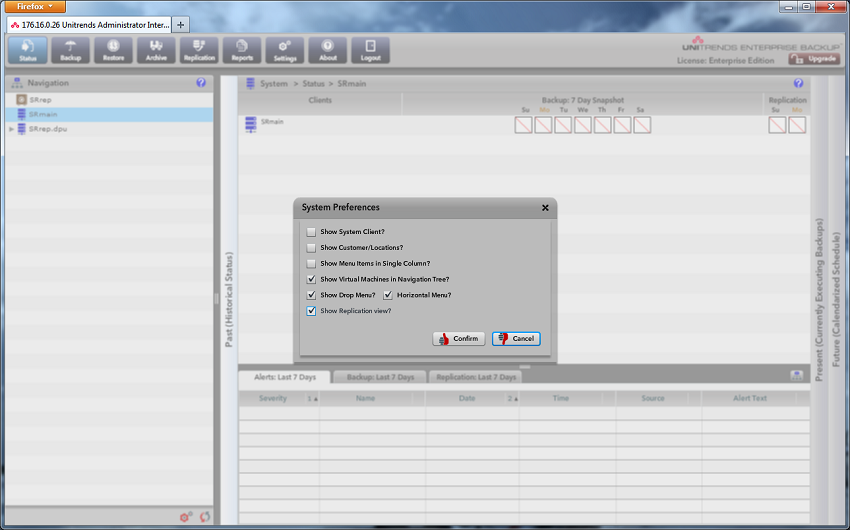 Once the desired server or VM is selected and the appropriate version, the next step is selecting the local server to restore it to. In our case we brought the off-site server into our main enterprise test lab and connected it to our ESXi cluster with available datastores to mount the VMs on. 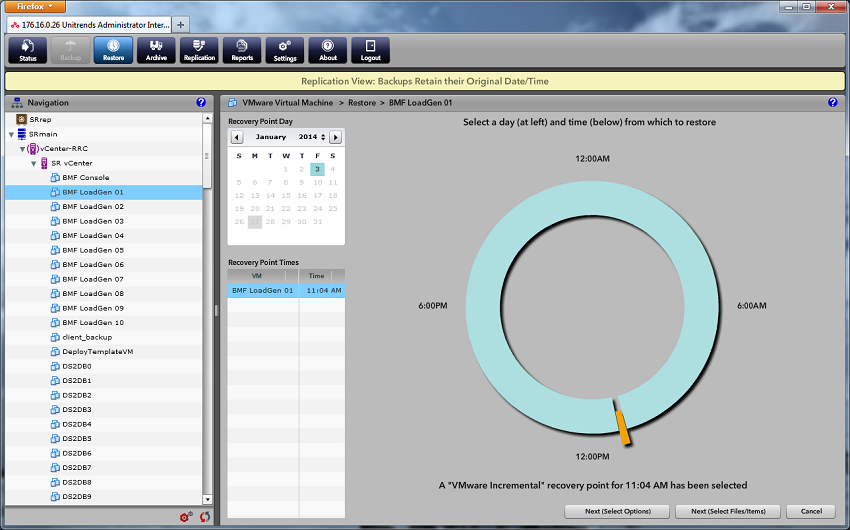 After that click restore and wait for the backup to be rehydrated and placed in your environment. For mission critical systems, Instant Recovery is also an option to spin up the VM immediately and Storage vMotion it from the replication site storage on the UEB to a selected production datastore. 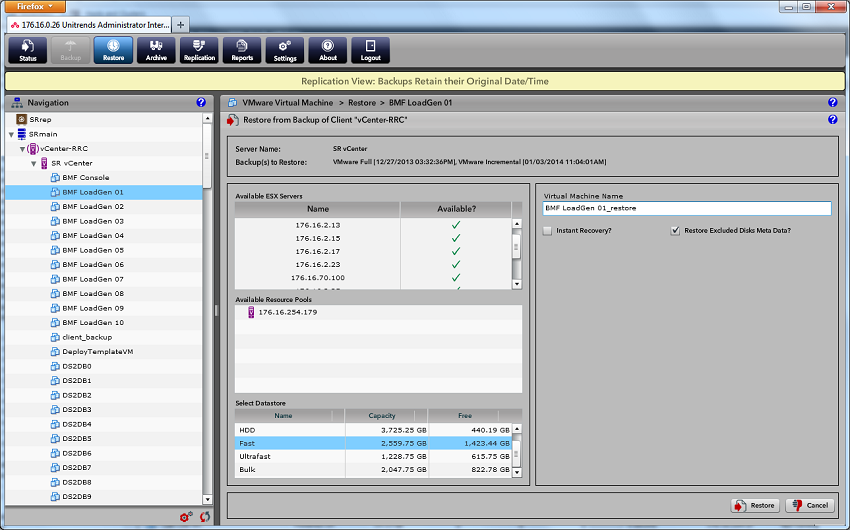 In this test scenario we were able to restore each VM without a problem at roughly the speed of the local datastore. In our case the mirrored 4TB 7k SAS storage the replication UEB was stored on was capable of about 50-60MB/s. With the UEB attached to faster backend storage, quicker restoration speeds would be expected. At the end of the day the Unitrends’ UEB did exactly what it was supposed to do, even in a catastrophic failure where the only item left is an off-site replication UEB. 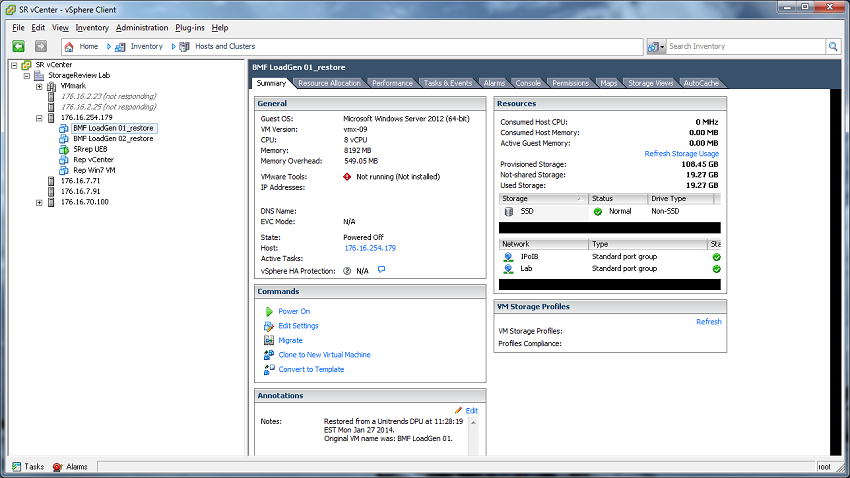 The Unitrends Enterprise Backup solution is about as easy as it gets when it comes to deploying enterprise-grade backup solutions. Once you figure out how and why the interface is laid out the way it is, you will find it much easier as well as more efficient than many other solutions. Another attractive feature Unitrends offers users is their variety of pricing solutions, which includes a handy licence per host and license per terabyte of backed up data. A free version is also available, which protects 8 VMs and an NFR version for VMware or Microsoft Certified Processionals. The Not for Resale (NFR) Edition protects 2 sockets and 2 physical servers as well as two application servers for as many VMs or files as a business needs.

For the SMB and midmarket where Unitrends largely plays, the hook is definitely the free virtual license, but Unitrends has more than just party tricks to retain customers. As mentioned the deployment is easy, but after that, it’s the rest of the core feature set and recoverability that makes UEB sing. To get more than just a cursory look at how UEB works, we deployed it in our lab for months, covering off our virtualized infrastructure both locally and remotely via off-site replication. Throughout the testing UEB never let us down and as is to be expected in a working lab, was called on more than a few times to recover a blown up or otherwise irreparably damaged VM. Taking the platform to its limits, we also simulated a complete data failure by deleting the local UEB and associated datastore to test recovering from our off-site replication UEB.

If we have much to complain about, the interface could use some modernization and because it leverages flash, sometimes remote management can be a little bit of a pain depending on your configuration. That’s certainly a fixable problem though, should Unitrends be hearing similar grumbling from their customers. It’s also easy to overlook given the fact that the solution works so well throughout and has all the requisite bells and whistles like compression (inline), dedupe (post) and instant recovery (boot the VM from the UEB).