Earlier this year, QSAN launched its first All-Flash SAN with the QSAN XCubeFAS XF2026D. As opposed to being a update to QSAN’s XCubeSAN line, the XCubeFAS XF2026D is an all new SAN product. The product is built on the foundations of being user-friendly, can be deployed and integrated into any environment, and is affordable regardless of the size of the company.

Earlier this year, QSAN launched its first All-Flash SAN with the QSAN XCubeFAS XF2026D. As opposed to being a update to QSAN’s XCubeSAN line, the XCubeFAS XF2026D is an all new SAN product. The product is built on the foundations of being user-friendly, can be deployed and integrated into any environment, and is affordable regardless of the size of the company.

The foundations laid out above are the main thrust of the QSAN XCubeFAS XF2026D. The company states the new SAN can be operated by all and managed through just a few clicks. QSAN states that features such as multiple volume creation, automatic remote replication, SSD monitoring, and performance analytics are easy to use. QSAN also states that the XF2026D can be deployed and integrated into any data environment whether they need high performance or certain features that are ideal for use cases like virtualization environments, big data analytics, and managing demanding applications. All of the above comes with the claims of affordability.

The QSAN XCubeFAS XF2026D is a 2U SAN that has a dual-active controller architecture. The SAN delivers high availability by designing everything with full redundancy. It also features automatic failover/failback mechanism, and cache mirroring through NTB (Non-Transparent Bridge) bus to achieve Active-Active functionality. With these features the XF2026D claims 99.9999% availability.

Another new feature that also improves data reliability is the Cache-to-Flash memory protection. This technology preserves cache data in the event of a power loss. The XF2026D leverages a battery backup module to transfer the data out of cache into an M.2 flash module assuring no data is lost and no inconsistencies occur.

As stated, the QSAN XCubeFAS XF2026D is a 2U SAN and the design stays in line with the rest of QSAN products. Across the front are the 26 2.5” drive bays with the signature green release button. On the right side of the front panel are the system power button, the UID (Unique Identifier) button, system access and system status LEDs and a USB port for the USB LCM module.

The rear of the device has the dual redundant power supplies, as well as the dual controllers. Each controller has onboard twin 10Gbase-T network connectivity, in addition to an out-of-band management interface. For additional connectivity, each controller has two host card slots, which can be loaded up with dual or quad port 8/16Gb cards, or dual or quad port 10Gb Ethernet cards. This gives users a wide range of options for attaching storage into a diverse datacenter environment. Expansion capabilities are also supported through two 12Gb/s SAS ports per controller, enabling SAS 3.0 expansion shelves. In the top left corner lies the Flash-to-Cache memory and battery module.

With this SAN comes a new management OS from QSAN, XEVO. This HTML5 GUI follows similar principles as the past QSAN models, specifically ease of use. The main page or dashboard has a quick view of anything an admin may need to know about right away. This includes hardware alerts, capacity used, system alerts, storage overview, and real-time performance. There are several tabs across the top that includes: Dashboard, Storage, Hosts, Protection, Analysis, System, and Messages. 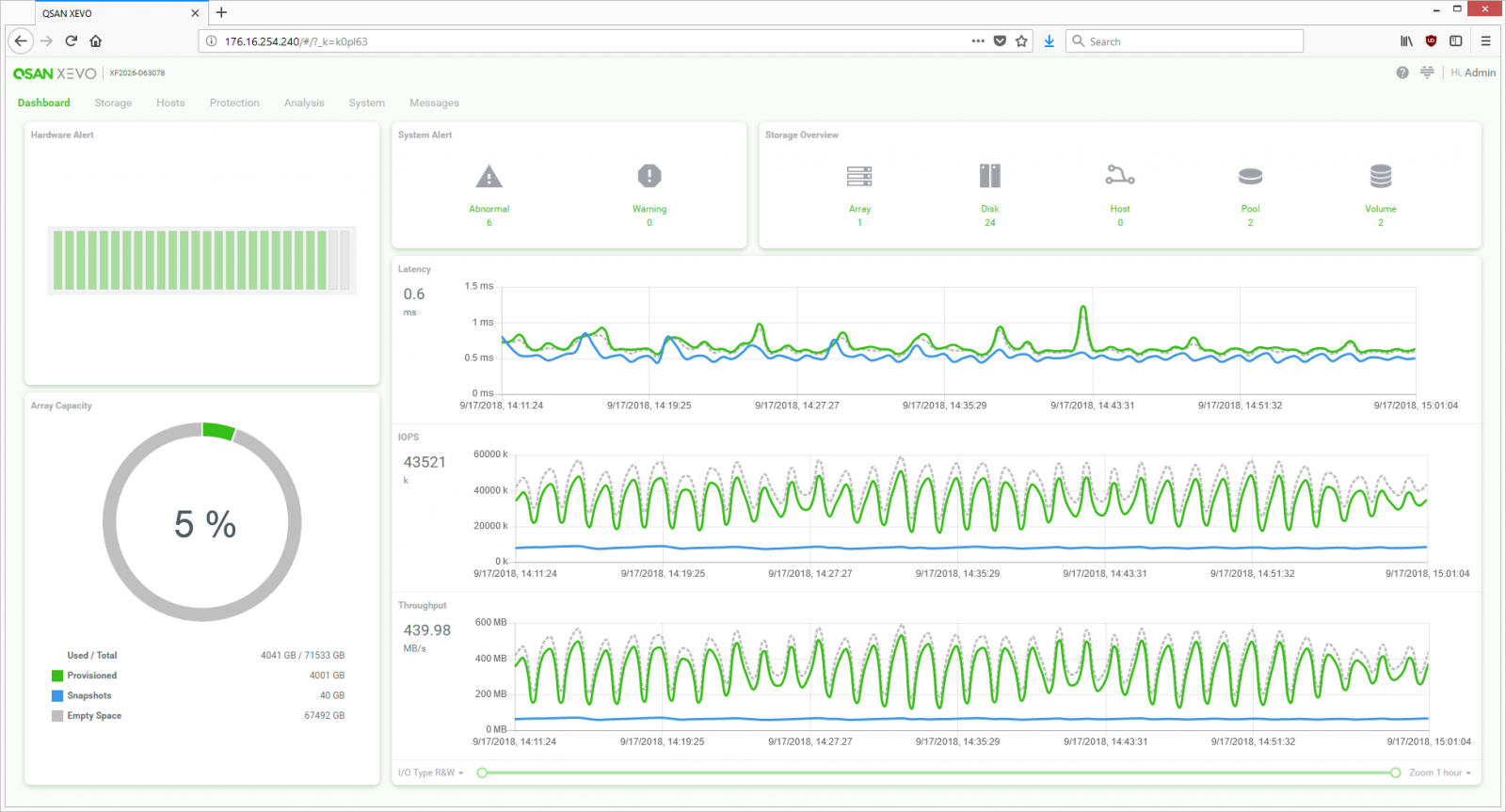 Under the Storage tab users can see the storage pools or create new ones. Within the pool they can see how much storage is used, the health and status of the storage, as well as the disk groups and volumes. 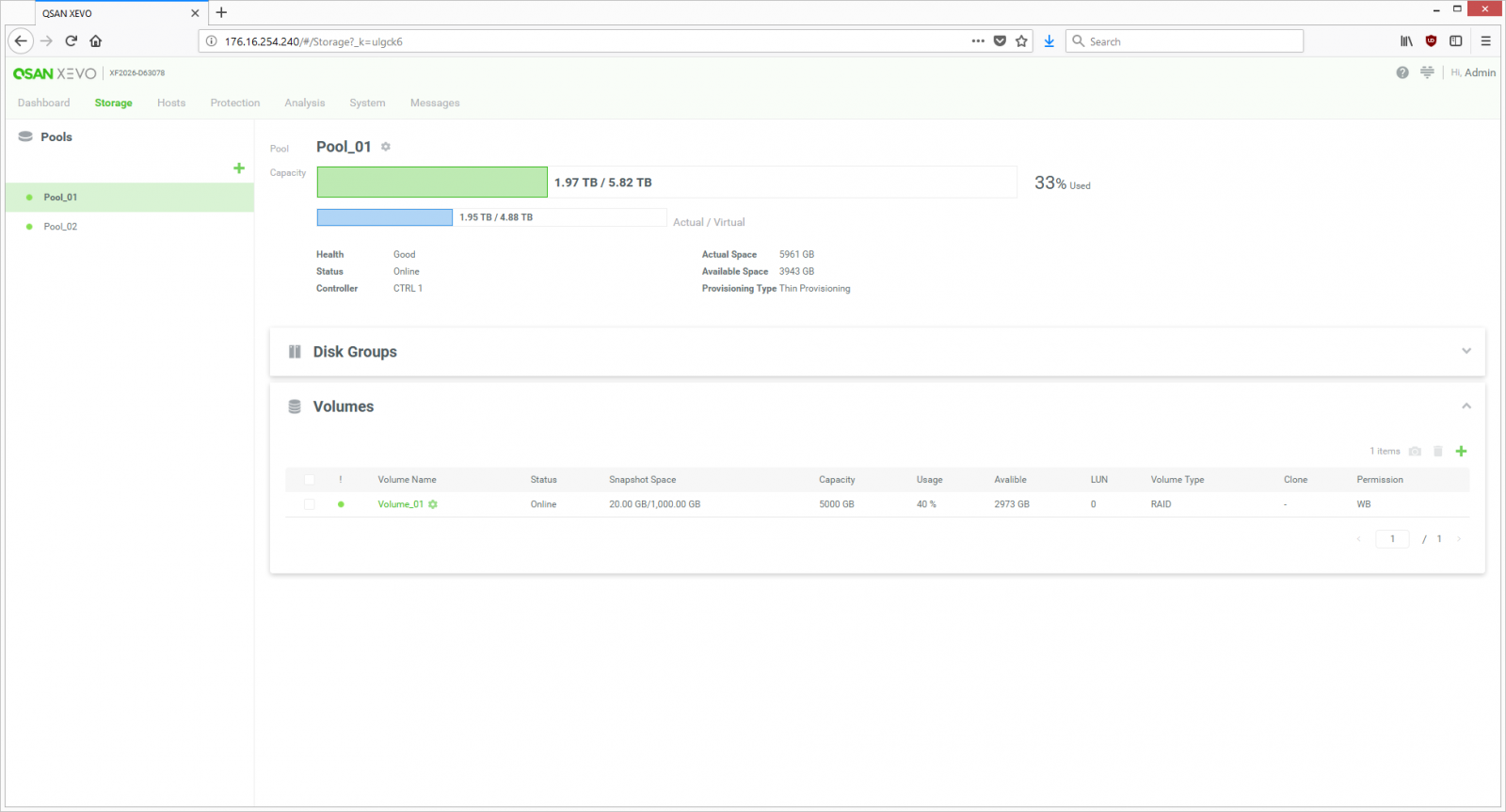 In the Analysis tab users can see important information such as performance of a volume (broken down into latency, IOPS, and throughput) as well as capacity usage of a volume. 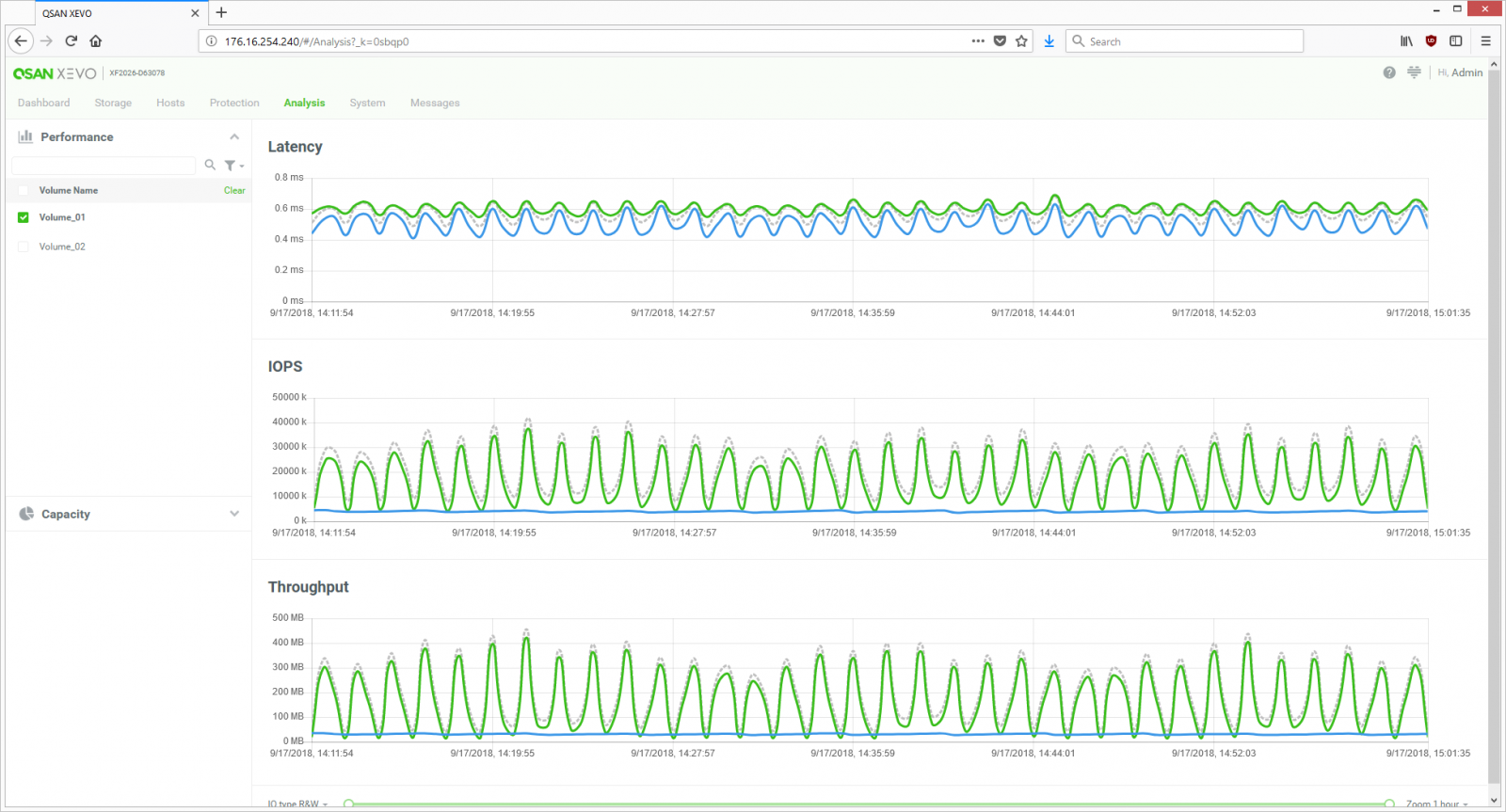 The System tab shows the hardware and what it is currently doing. Users can select between the sub-tabs of Arrays, Settings, Data Ports, and Maintenance. Under the Arrays sub-tab users can hover over things like the temperature icon to see the temperature for the host selected. 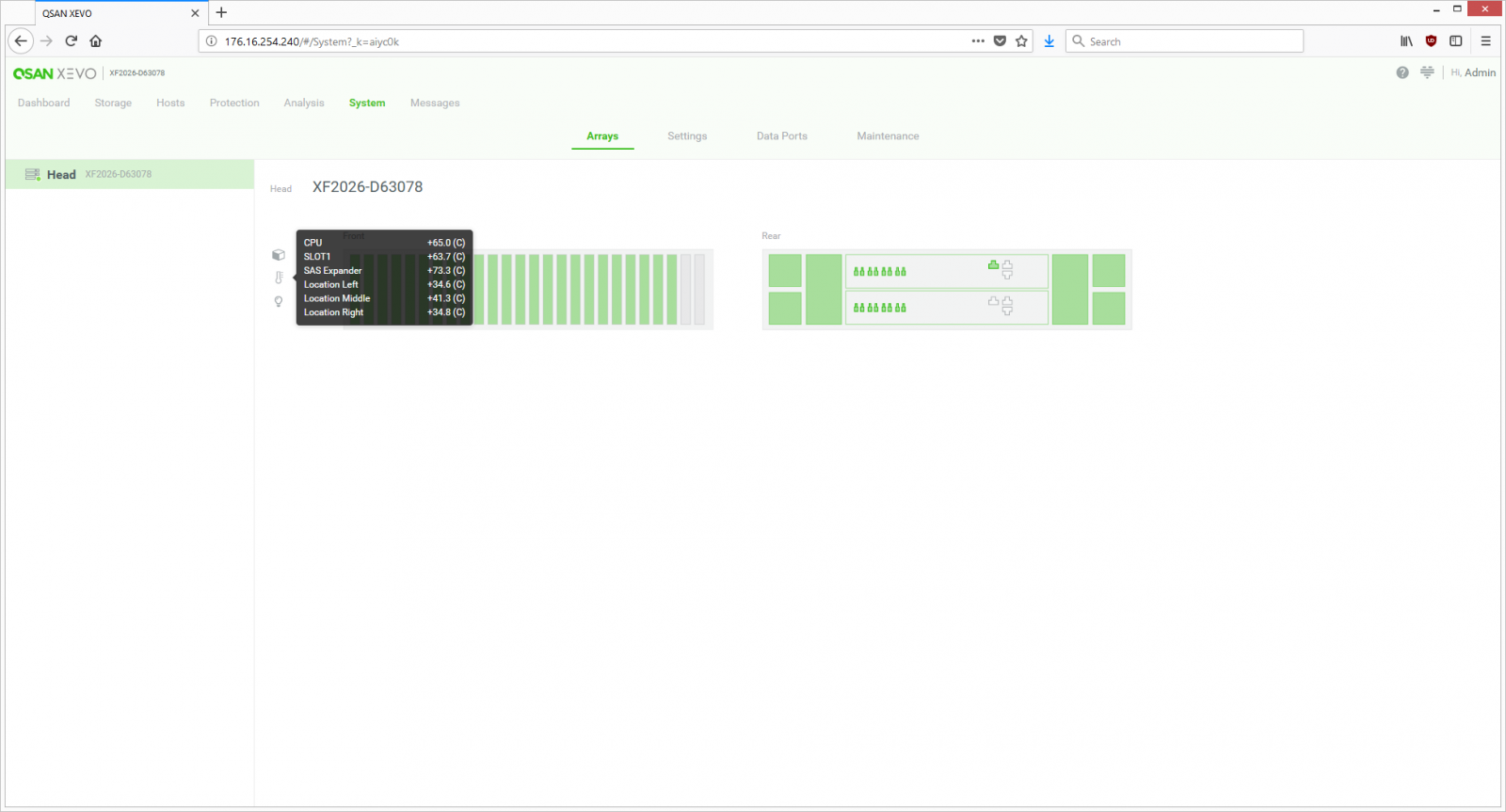 Users can also hover over a specific disk to see the type, temperature, status, and estimated remaining life. 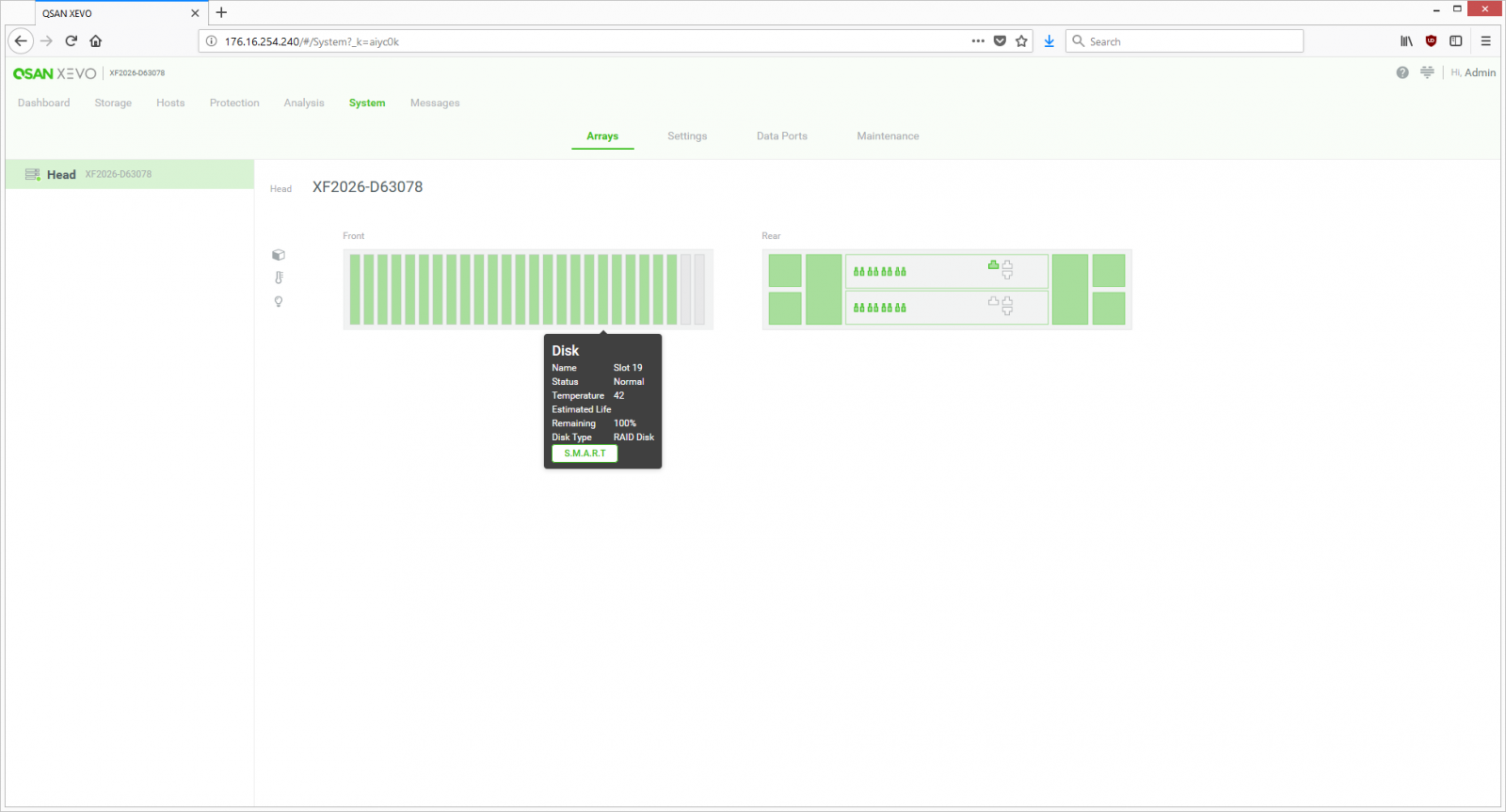 Overall the UI and management are a big step forward for QSAN. Prior systems weren’t difficult to manage but this look and feel is much better. In an era where a usable HTML5 interface is table stakes, QSAN checks off that box.

The application workload benchmarks for the QSAN XCubeSAN XF2026D consist of the MySQL OLTP performance via SysBench and Microsoft SQL Server OLTP performance with a simulated TPC-C workload. In each scenario, we had the array configured with 26 Toshiba PX04SV SAS 3.0 SSDs, configured in two 12-drive RAID10 disk groups, one pinned to each controller. This left 2 SSDs as spares. Two 5TB volumes were then created, one per disk group. In our testing environment, this created a balanced load for our SQL and Sysbench workloads.

This test uses SQL Server 2014 running on Windows Server 2012 R2 guest VMs, and is stressed by Quest’s Benchmark Factory for Databases. While our traditional usage of this benchmark has been to test large 3,000-scale databases on local or shared storage, in this iteration we focus on spreading out four 1,500-scale databases evenly across the QSAN XF2026D (two VMs per controller).

For SQL Server average latency the XF2026D had an aggregate score of 5.0ms.

Each Sysbench VM is configured with three vDisks, one for boot (~92GB), one with the pre-built database (~447GB), and the third for the database under test (270GB). From a system-resource perspective, we configured each VM with 16 vCPUs, 60GB of DRAM and leveraged the LSI Logic SAS SCSI controller. Load gen systems are Dell R740xd servers.

With 4K random writes we see an improvement in latency with the XF2026D maintaining sub-millisecond latency until about 250K IOPS and going on to peak at about 270K IOPS with 4.4ms latency before falling off some.

Switching over to 64K sequential, the XF2026D started off just a hair under 1ms in read before going over and then going on to peak just over 125K IOPS or 7.8GB/s with a latency of roughly 4.1ms before falling off slightly.

With 64K write we again see a better latency with the XF2026D maintaining sub-millisecond latency until about 64K IOPS or 4GB/s and going on to peak at 70,731 IOPS or 4.4GB/s with 3.6ms of latency.

The next batch of benchmarks is out Oracle workloads with the XF2026D staying under 1ms until about 125K IOPS and having a peak of 293,975 IOPS and a latency of 3.91ms.

Next, we switched over to our VDI clone tests, Full Clone (FC) and Linked Clone (LC). For VDI FC Boot, the XF2026D had sub-millisecond latency performance until just under 10oK IOPS with a peak of 247,710 IOPS and a latency of 3.84ms.

VDI FC Initial Login saw the XF2026D ride the 1ms line for some time with a peak of roughly 65K IOPS at a latency of 7.2ms before dropping off a bit.

With VDI FC Monday Login the XF2026D started off better latency-wise, staying under 1ms until about 48K IOS and hitting a peak of 72,224 IOPS at a latency of 4.73ms.

Switching over to Linked Clone (LC), we first looked at the boot test. In this scenario, the XF2026D had sub-millisecond latency performance until about 65K IOPS and peaked at 152,191 IOPS with 3.22ms for latency.

With VCI LC Initial Login we saw a stronger latency before with the XF2026D staying under 1ms until about 35K IOPS with a peak of 44,461 IOPS at 3.76ms latency.

Finally our VDI LC Monday Login had the XF2026D start just under 1ms and riding the 1ms line until 35K IOPS before going on to peak at about 46K IOPS with a latency of 5.4ms.

The QSAN XCubeFAS XF2026D is the company’s latest SAN and first all-flash SAN. The 2U SAN is built around high availability with redundancy built in and offers six 9’s of availability. The XF2026D has the Cache-to-Flash technology that moves cached data to an M.2 module in the case of a power outage. Overall the device is built to be simple to use and deploy, easy to integrate into any environment, and to be affordable regardless of the company’s size.