The Sabrent DS-UCTB is a 10-bay JBOD that allows users to create a flexible, high-capacity external storage solution. The DS-UCTB supports ten SATA 3.5” hard drives, sports an all-aluminum build for heat dissipation, and is configured with a USB 3.2 Gen2 Type-C port. The JBOD features a fully tray-less design along with independent power switches for each drive.

The Sabrent DS-UCTB is a 10-bay JBOD that allows users to create a flexible, high-capacity external storage solution. The DS-UCTB supports ten SATA 3.5” hard drives, sports an all-aluminum build for heat dissipation, and is configured with a USB 3.2 Gen2 Type-C port. The JBOD features a fully tray-less design along with independent power switches for each drive. 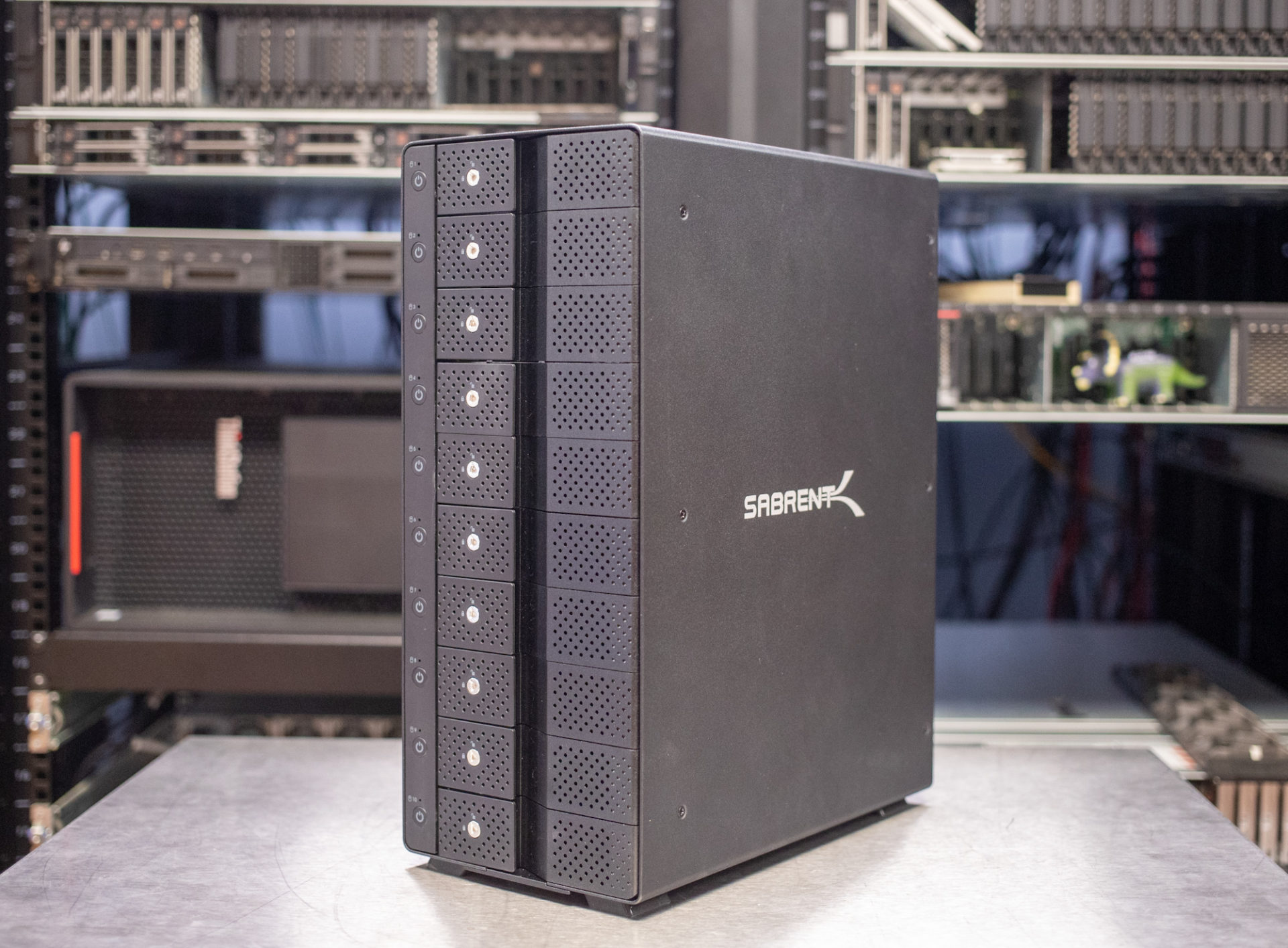 There are plenty of use cases for a JBOD such as this, especially depending on the types of drives that are installed. Some of the more notable uses would be a high-capacity backup to a small business that needs to house a ton of data, a place to store media for a plex server, or even offload large amounts of cloud data to have a physical backup of personal data. To use the DS-UCTB, it is as simple as plugging the host device into the DS-UCTB via the included USB-C to USB-C/A cable. Each drive bay is then individually controlled and addressed, so drives can be used individually as well as grouped together.

On an important note, the Sabrent DS-UCTB is designed to house storage and is not capable of doing anything else unless external software is used. This means that the DS-UCTB doesn’t have the capability of automatically creating RAID configurations like a NAS, so if this type of storage is wanted, you will need to use software for that. Fortunately, there are a ton of options out there for RAID configurations and are fairly easy to install and run.

Backed by a 1-year (extendable to 2 years), the Sabrent DS-UCTB currently goes for $599 on Amazon. There are also other storage options, like the 5-Bay DS-SC5B, which we reviewed about a year ago.

The Sabrent DS-UCTB comes in at 5.7 inches wide, 10.5 inches deep 13.4 inches tall. A fairly large JBOD that will need a decent amount of space whenever it will be deployed. Since there are a maximum of ten drives that can fit, the DS-UCTB can get pretty loud sometimes, so it is good to keep in mind where you want to set it up.

The enclosure features a nice all-aluminum build that feels solid and quite sturdy for a vertical stack of ten drives at maximum load. All drives are loaded from the front of the DS-UCTB via the ten slots or doors that take up the entire front panel. Combined with the aluminum build, the small ventilation holes on each slot door, and the two 120mm fans the DS-UCTB has the ability for heat dissipation to ensure the drives don’t overheat and cause reliability concerns. 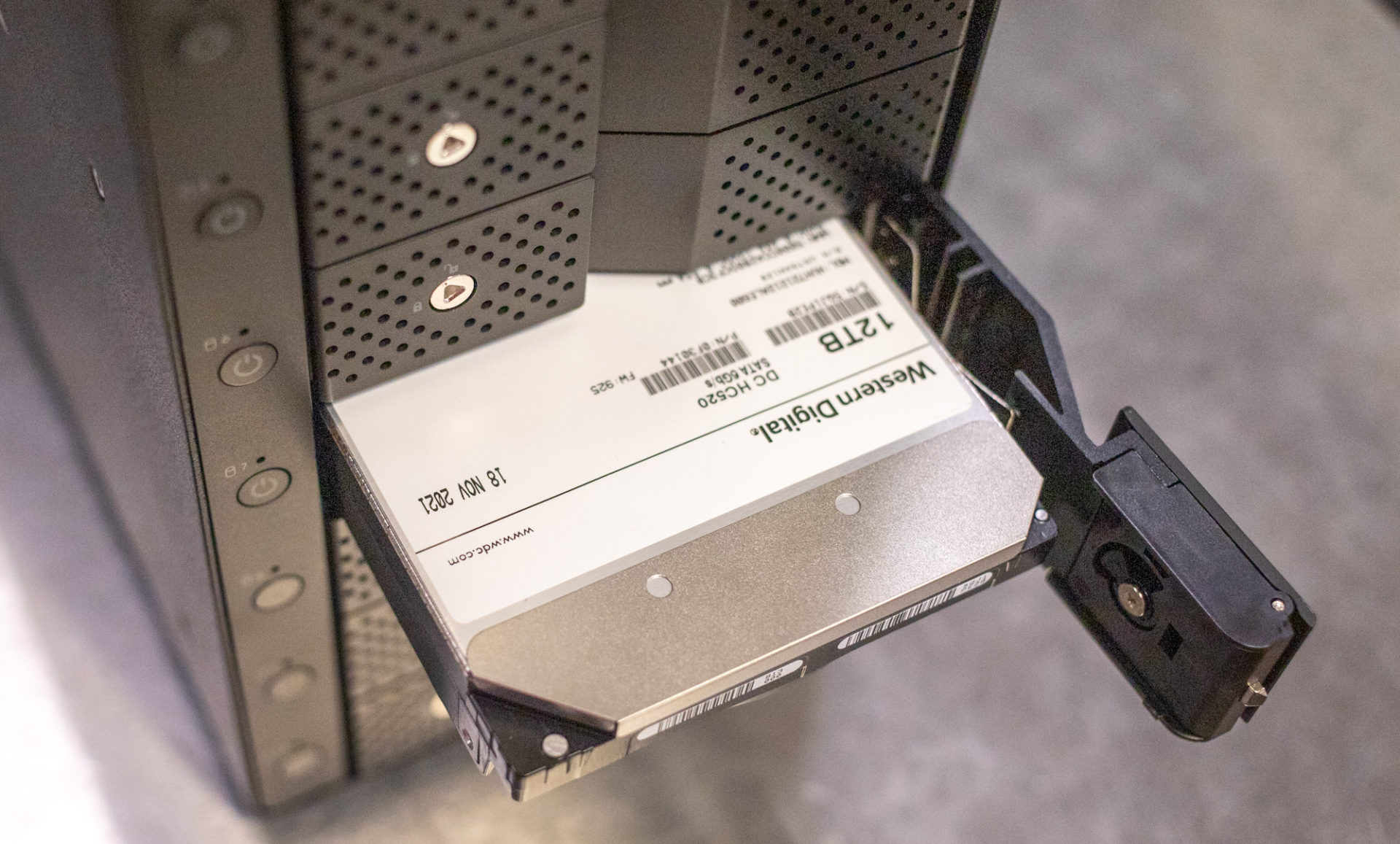 Sabrent has made the DS-UCTB completely tray-less which allows for quick and easy secure installation and removal of drives. Users can simply pull the latch, open the bay door, pop in the drive, and the slot is populated. The entire installation to fill the JBOD to the gills can be done in a few minutes.

For extra safety, there is also the lock mechanism which will lock the drives into place making sure the drives don’t accidentally move or get jostled around. This locking mechanism ensures that the drives don’t become dislodged and possible data corruption happens. 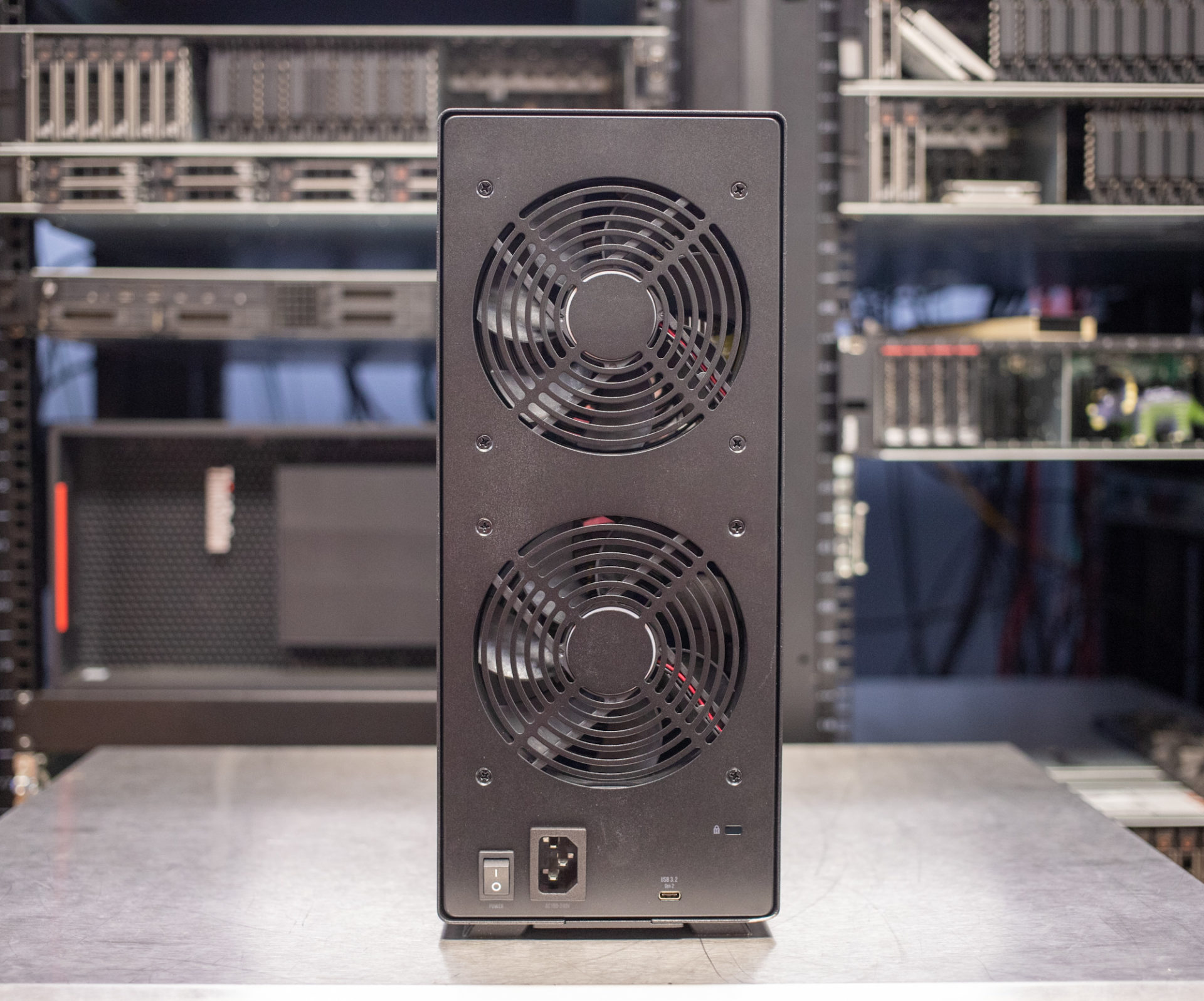 On the rear of the enclosure, there are two 120mm fans stacked vertically that take up nearly the entire backside. Both these fans aid in the thermals of the DS-UCTB, however, the downside is that fans make noise and can be annoying to hear at times if you work nearby the system. Under the fans are the power adapter port, on/off switch, the USB 3.2 Gen2 connection port, and the Kensington security slot.

To look at the performance of the Sabrent DS-UCTB 10-bay, we ran several tests populated with 10X 12TB WD drives and benchmarked it using the Blackmagic Design Disk Speed Test and the IOMeter speed test. For our Blackmagic Design test, we put all the ten HDDs into a Windows Storage Space Pool with their respective settings of simple, 2-way mirror, 3-way mirror, and a parity.

The first Blackmagic Design test was the simple test with all 10 drive bays populated. The DS-UCTB showed us 245.5MB/s write and 245.2MB/s read along with hitting many of the checkmarks in the “Will It Work?” section.  Though not the fastest speeds that we have seen from attached storage, getting consistent numbers in both the read and write is always good. 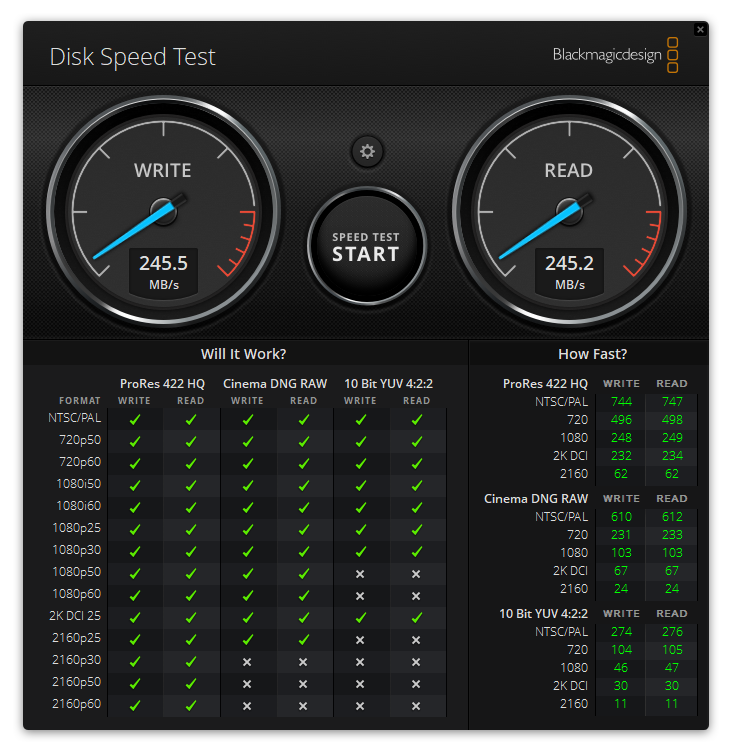 The next Blackmagic Design test was the 2-way mirror test with all ten drives. In this test, the DS-UCTB showed us 235.4MB/s write and 245.6MB/s read. The write speed was slightly lower than the simple test, and the read stayed right in line, along with a very similar “Will It Work” section. 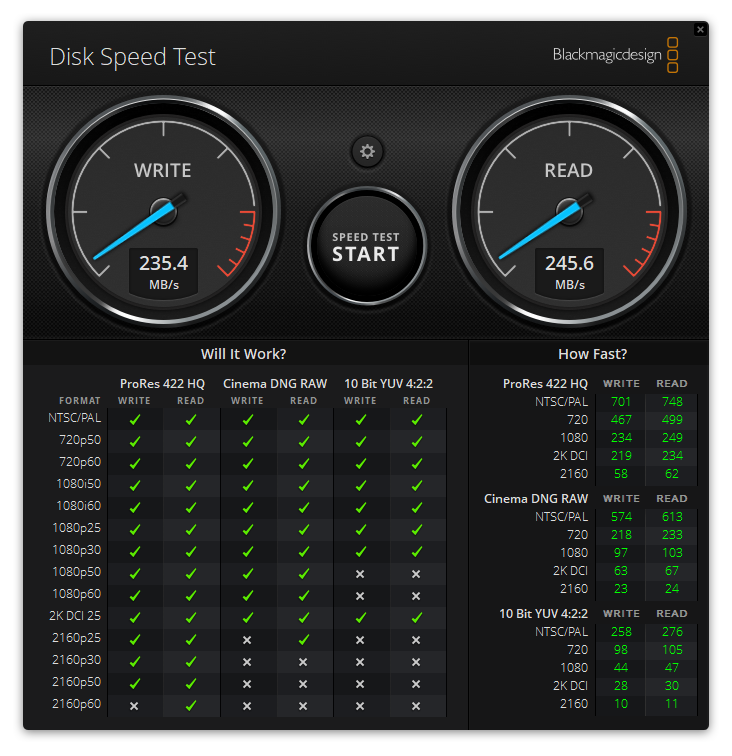 After the 2-way mirror, we ran a 3-way mirror test on the drives. In this case, the DS-UCTB again showed a lower number in the write speed and a relatively close number in the read. The DS-UCTB reached 206.8MB/s write and 243.8MB/s read. 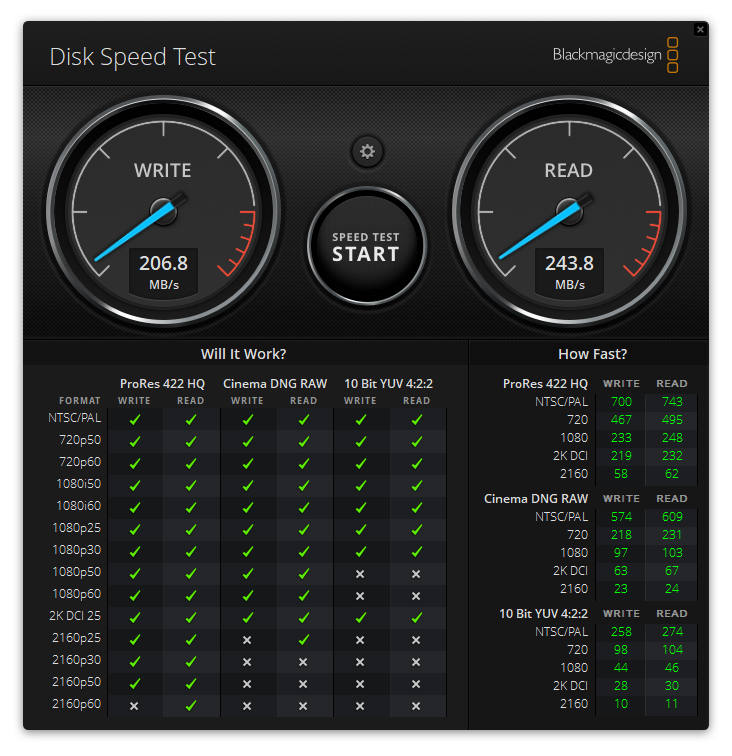 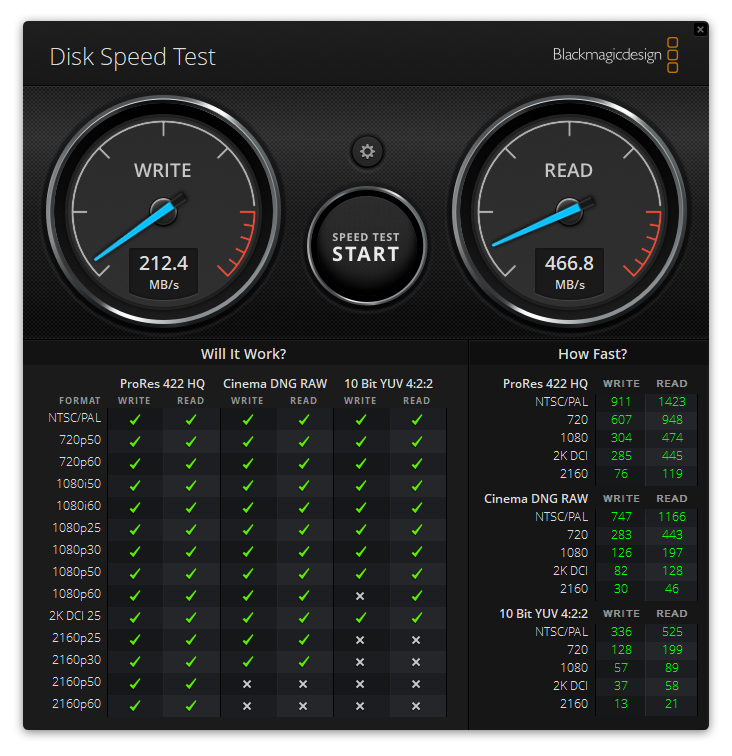 Using our lab’s XiTRON XT2640 power meter, we measured the power consumption of the Sabrent DS-UCTB over a handful of scenarios. These included initial 10-bay HDD spinup, power activity at idle and write activity, as well as standby power after the computer was shut down. 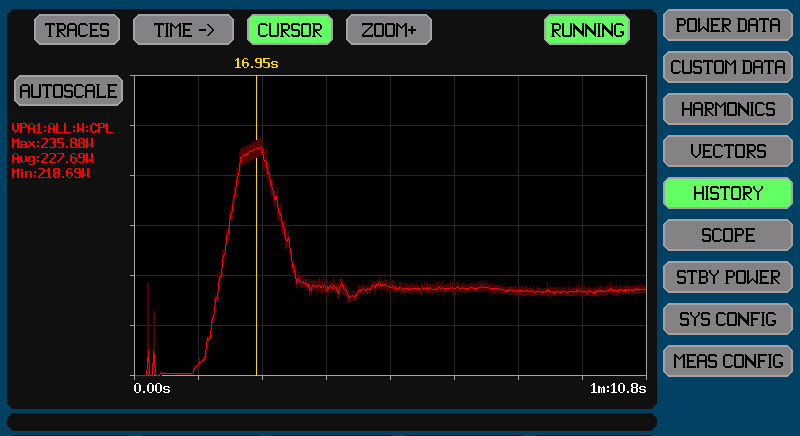 During the initial power-on process where each drive starts to spin up, we were looking for what the peak power draw from the 10-bay enclosure would be. We were able to measure a peak of around 235 watts, which then tapered down to an idle of 80-90 watts. 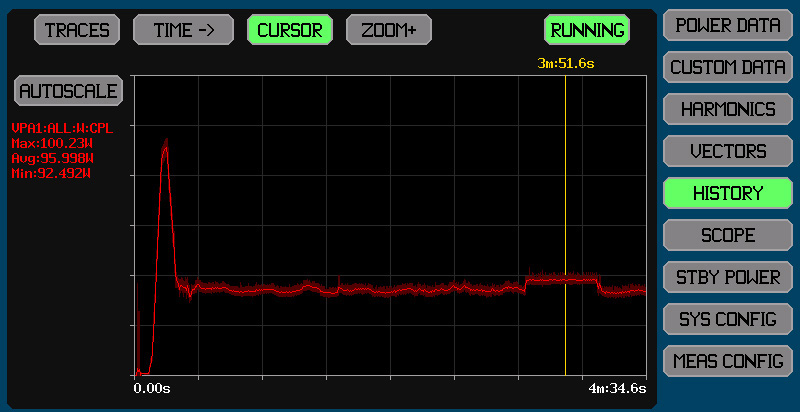 Once the hard drives were settled into there idle activity, we kicked off write activity on all 10 drives at the same time. This didn’t have a huge impact, raising the power draw from 80 watts to an average of 96 watts. 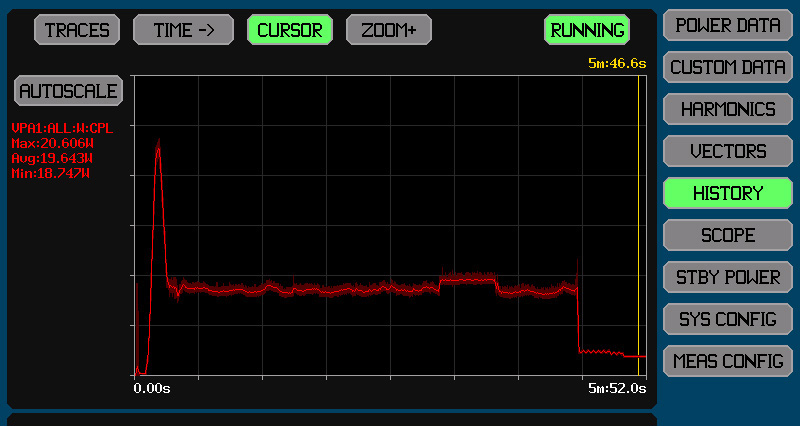 When the notebook connected to the 10-bay docking station was turned off, we were a bit surprised to see a significant power draw after all drives spun down. The DS-UCTB consumed about 20 watts off power in this state, even with the USB-C cable disconnected from the system.

The 10-bay Sabrent is a tray-less HDD enclosure offering consumers all the trays and open slots needed to create a high-capacity storage option for a multitude of use cases. The 10-bay DS-UCTB would work well for small-medium businesses that need to house a lot of data or even content creators that need to store a large number of video files.

Sabrent has also made setting up the DS-UCTB quite easy with the quick latch doors and not having to use a tray, it is as simple as pushing the drive straight in and closing the door. As for the compatibility of the drives, the DS-UCTB supports up to ten SATA 6Gbit/s 3.5” hard drives and features USB 3.2 Gen2 connectivity, allowing for up to 10Gbps. 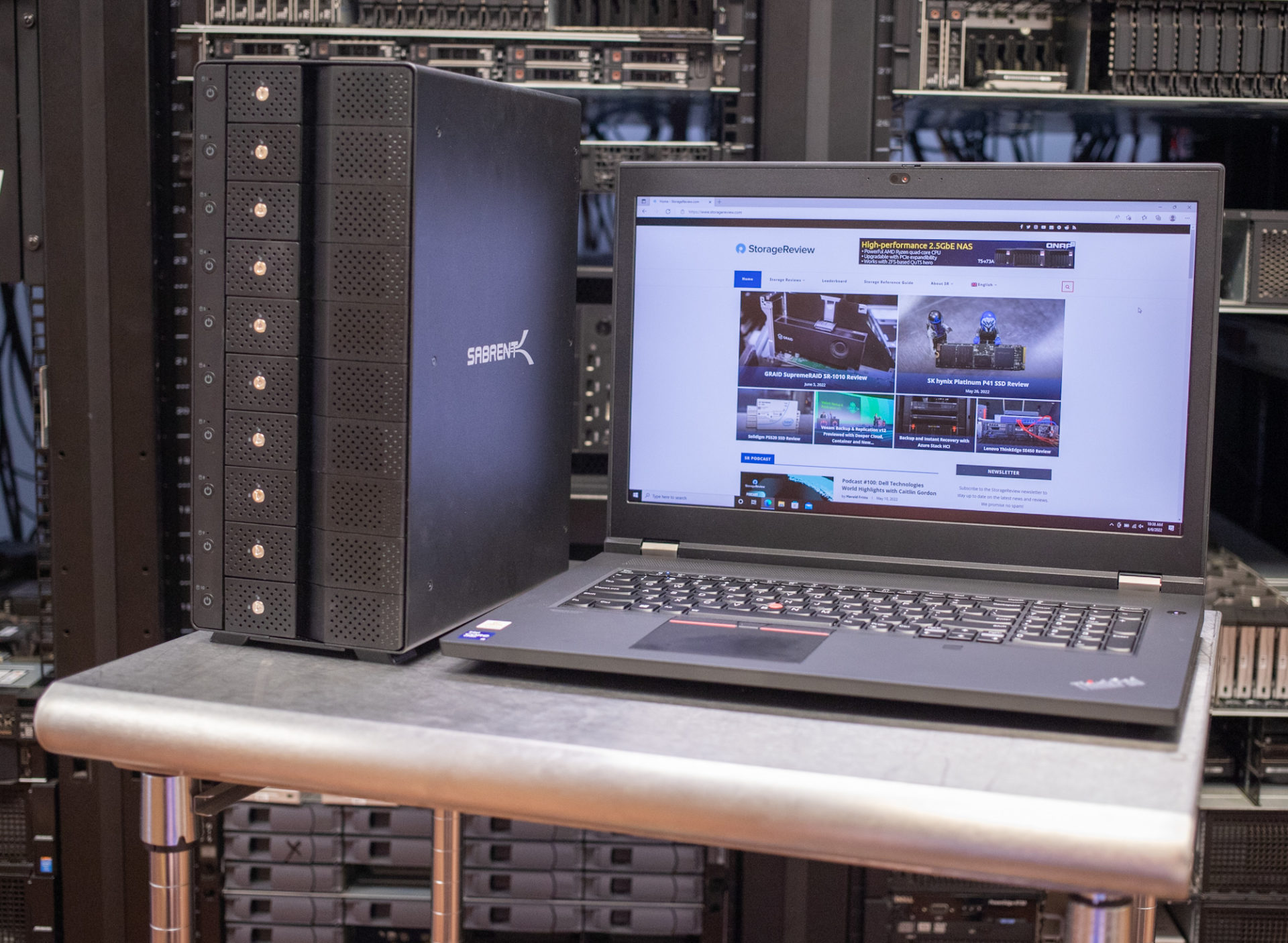 The DS-UCTB also features a single cable for all connectivity to the host device. This single cable is able to transfer all data between the DS-UCTB and the hose device. There are a couple of important things to also remember with this device. The first is that since the only form of connectivity is the USB Type-C port, there isn’t a way to physically put the DS-UCTB on a network, the only way to allow for network content is to make a shared folder, but it has to always be connected to a host device. The other important part is that the DS-UCTB doesn’t have built-in RAID configuration capabilities, so using third-party software will be necessary if a RAID configuration is wanted. It is a simple JBOD at the end of the day.

As for the performance of the DS-UCTB, we saw steady, but light, numbers from our Blackmagic Design benchmarks. Even though we test the DS-UCTB in four different states: simple, 2-way mirror, 3-way mirror, and parity, we still saw around 240MB/s in each test until we got to the parity test, in which we saw almost double the read speed at 466MB/s and lower write speed at 212MB/s.

Overall, the Sabrent DS-USCTB 10-bay enclosure offers users a ton of storage bays with broad USB compatibility. The DS-USCTB does have a decent price tag of $599.99 and combined with the ability to hot-swap new drives in and out, the Sabrent DS-UCTB is great for users that might need a lot of storage now or in the future.