Along with the Samsung 860 PRO that was announced at CES 2018 for high-end users, the company has also released a new 860 EVO. The EVO line is aimed for more mainstream uses for notebooks and desktops. Making improvements on the 850 EVO, the 860 EVO has six times the sustained performance of the 850 and has quoted speeds of 550MB/s read and 520MB/s write, which is only a hair over the quoted speeds of the 850 EVO on read and the same on write.

Along with the Samsung 860 PRO that was announced at CES 2018 for high-end users, the company has also released a new 860 EVO. The EVO line is aimed for more mainstream uses for notebooks and desktops. Making improvements on the 850 EVO, the 860 EVO has six times the sustained performance of the 850 and has quoted speeds of 550MB/s read and 520MB/s write, which is only a hair over the quoted speeds of the 850 EVO on read and the same on write. 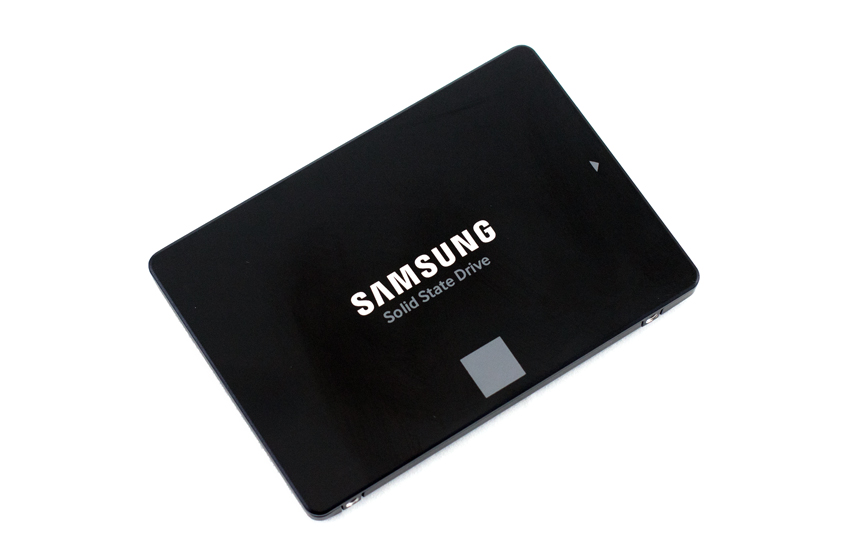 Like its predecessor, the 860 EVO comes in capacities as high as 4TB, however the lower end now stops at 250GB. The new 860 EVO leverages the same 3bit MLC 3D V-NAND as the 850 but comes with an updated Samsung MJX controller. One area were it sets itself apart from the 850 EVO is that the new version comes in an M.2 form factor with up to 2TB of capacity. This makes for a nice capacity and performance upgrade to ultra-thin notebooks.

Samsung has kept the overall design of previous models of the EVO with a black case and a light gray square on top of the drive under the Samsung branding. A large sticker that tells important information such as model and serial number as well as capacity takes up the flip side. 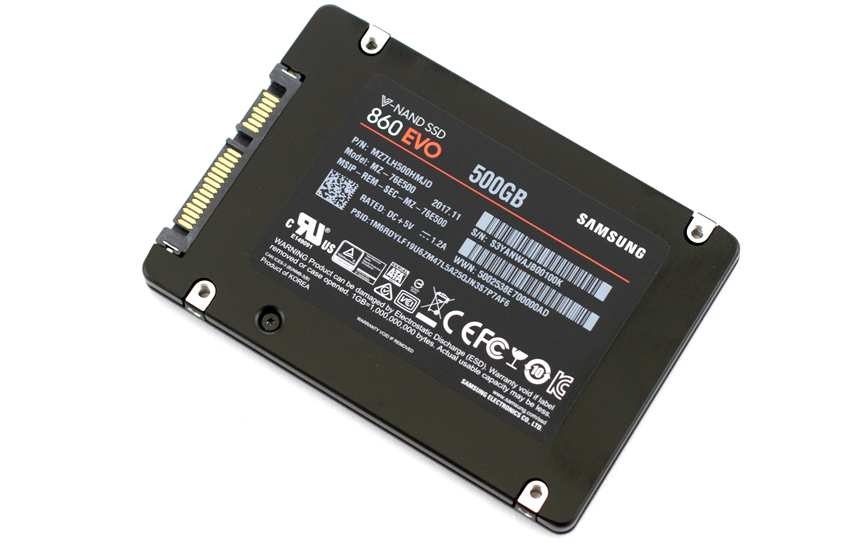 Opening up the drive one can see the new Samsung MJX controller, Samsung NAND pack, and DRAM on a stubby PCB. 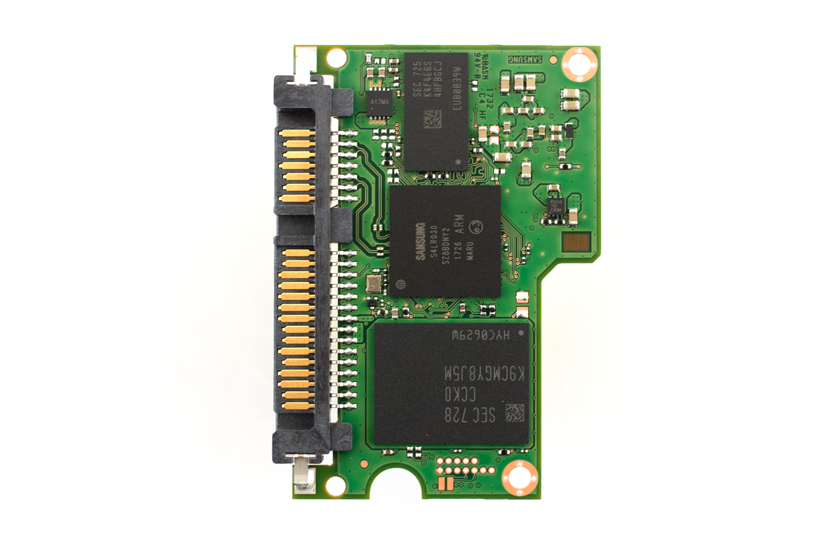 On other side of the PCB has the remaining NAND pack. 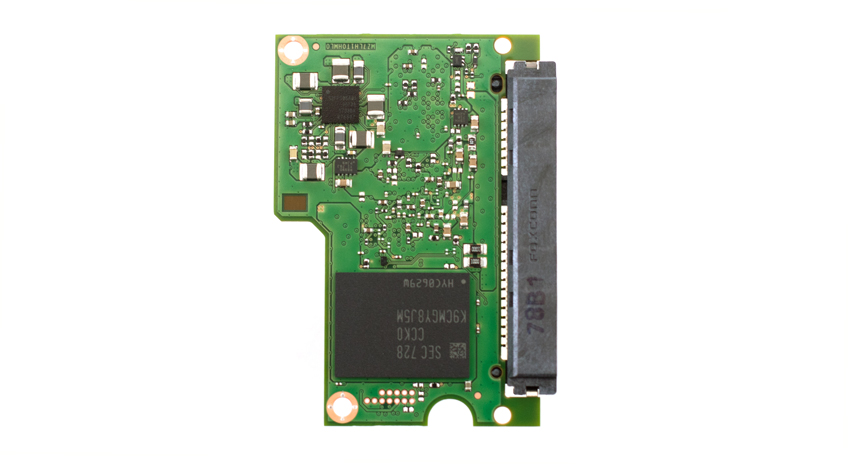 When looking at SQL Server Output, the new Samsung 860 EVO had a very poor showing on our transactional benchmark with only 353.6 TPS, where as the pro version hit 3,136.1 TPS.

StorageReview has rolled out an updated assortment of tests for end-user SSDs, which are designed to look more at IOPS or throughput in relationship to latency. These benchmarks have been honed at a much larger scale for enterprise drives; for client SSDs, we decrease the loads to more common workload sizes. Testing is done within VMware ESXi 6.5 with a 20GB test footprint, comprised of two 10GB vdisks that are placed onto a datastore presented off the SSD under load. The test platform leveraged in these tests is a Dell PowerEdge R740xd server. We measure performance through a Dell H730P RAID card inside this server, although with the card set in HBA mode only to disable the impact of RAID card cache. The methodology used better reflects end-user workflow with the consistency, scalability and flexibility testing within virtualized server offers.

For peak 4k write performance the EVO showed a much different performance profile than the 860 PRO. The drive started above 1ms (1.3ms) went to 10,876 IOPS at 4.3ms latency and then the drive shot up to 20.4ms in latency and dropped to 6,252 IOPS. The PRO on the other hand, had sub-millisecond performance throughput peaking at 47,241 IOPS and a latency of 161μs.

Samsung has updated its EVO line of mainstream SATA SSDs with the 860. The new SSD sees a very slight bump in performance and better endurance. The drive has a new controller and leverages intelligent TurboWrite technology to squeeze out quoted speeds of 550MB/s read and 520MB/s write. The 860 EVO comes in capacities ranging from 250GB to 4TB with the upper end model coming out at $100 USD less MSRP than the 850 EVO did a year ago.

Looking at performance, we see a rare misstep for Samsung. Generally speaking Samsung is a performance trend-setter in end-user computing, which has been the case with many of their SSDs. With the 860 EVO, although perhaps harder hit with the lower capacity version, the drive falls flat under performance-heavy workloads. In our test/dev SQL server benchmark the EVO only had 353.6 TPS and an average latency of 37,673ms. On our VDBench test the EVO had good performance in our 4k random read (sub-millisecond performance until 65K IOPS with a 72K IOPS peak and 3.53ms of latency) and 64k sequential read (sub-millisecond performance until 320MB/s with a peak of 447MB/s with a 4.4ms latency). The rest of the VDBench saw poor results often with spiking latency and unimpressive peak performance.

While our charts may be alarming at first glance, the 860 EVO will most likely be more than adequate for most typical desktop use cases with shallow queue depths. The bigger issue for potential buyers is whether they feel that the 860 EVO is worth opting for, or paying a premium for the 860 PRO that’s able to better handle itself under more demanding conditions.

A quick glance over the specs can show potential buyers that there isn’t much new here. The price for the 860 EVO is about even with the 850 EVO after a year, so going with the new model doesn’t take any more out of pocket. The lack of innovation here may have less to do with Samsung and its NAND and more to do with the SATA interface. This interface has been standard for some time now and has seen many innovations for it in terms of speed and capacity, but it is nearing the end of the road as to what can be done to improve the performance it can push. It wouldn’t be much of a surprise to start seeing 6TB or 8TB SATA SSDs in the near future but the speeds probably won’t improve too much.

The 500GB Samsung 860 EVO SSD fails to deliver in performance and comes at a premium price. For light users though, the EVO will probably get the job done and may be an option when pricing is more aggressive.