As Samsung updates its Data Center line of drives it is easy to get enamored by the fastest or largest drives that come along, namely NVMe drives. There is, however, still a large market for SATA interface drives. For this segment Samsung has released its new Samsung 883 DCT SATA SSD. The new drive is aimed at meeting the demands of server storage systems while giving the assurance of end-to-end data protection.

As Samsung updates its Data Center line of drives it is easy to get enamored by the fastest or largest drives that come along, namely NVMe drives. There is, however, still a large market for SATA interface drives. For this segment Samsung has released its new Samsung 883 DCT SATA SSD. The new drive is aimed at meeting the demands of server storage systems while giving the assurance of end-to-end data protection. 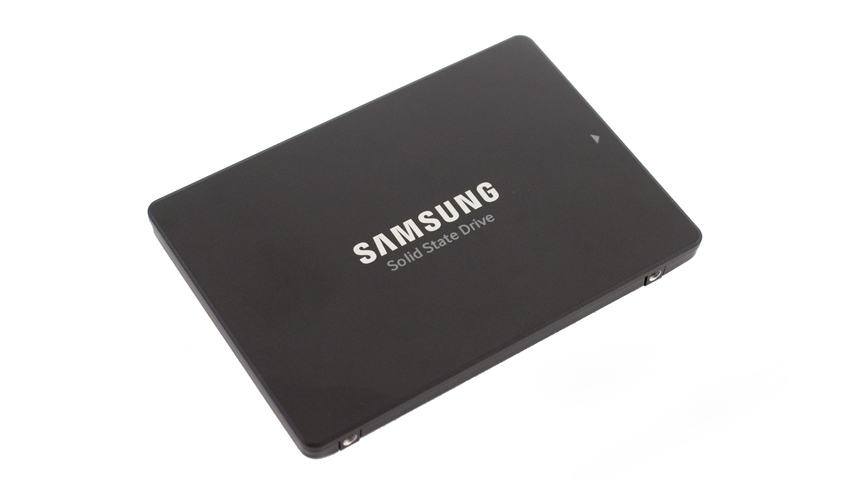 Built off of Samsung’s tried and true V-NAND, the 883 DCT comes with maximum performance of up to 560MB/s read, 520MB/s write, and throughput up to 98K IOPS read and 28K IOPS write. The drive is also optimized to hit a high level of QoS under the SATA interface. The drive comes in five capacities ranging from as low as 240GB to 3.84TB. 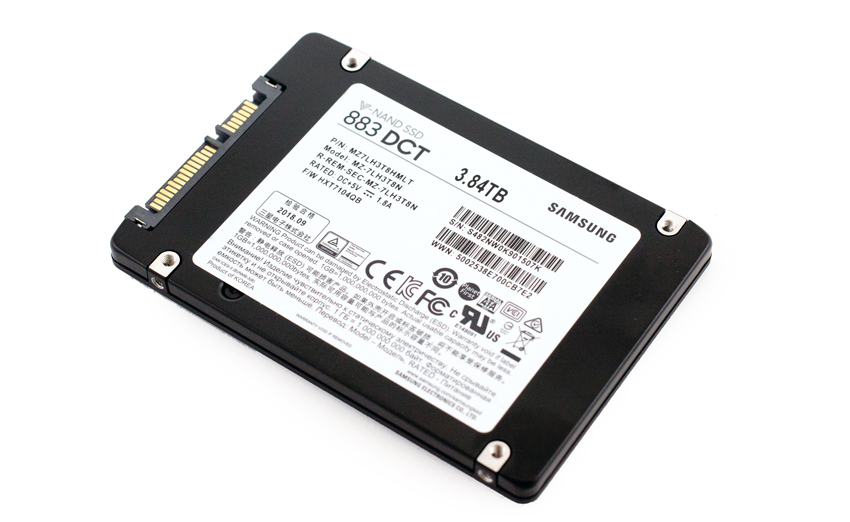 Data protection is of the utmost importance in the data center. With this in mind, Samsung states its 883 DCT is safeguarded with end-to-end data protection. The drive supports AES 256-bit encryption. And from an endurance perspective, has a mean time between failures of two million hours.

The Samsung 883 DCT SATA SSD comes with a 5-year limited or 0.8 DWPD warranty. For this review we will be looking at the 3.84TB capacity.

Our Enterprise SSD reviews leverage a  Dell PowerEdge R740xd for synthetic benchmarks. Synthetic tests that don't require a lot of CPU resources use the more traditional dual-processor server. In both cases, the intent is to showcase local storage in the best light possible that aligns with storage vendor maximum drive specs.

In order to understand the performance characteristics of enterprise storage devices, it is essential to model the infrastructure and the application workloads found in live-production environments. Our benchmarks for the Samsung 883 DCT are therefore the MySQL OLTP performance via SysBench and Microsoft SQL Server OLTP performance with a simulated TCP-C workload. For our application workloads, each drive will be running 2-4 identically configured VMs.

For our SQL Server transactional benchmark, the Samsung 883 DCT took the top spot with 6,291.8 TPS.

A better indication of SQL Server performance is latency compared to TPS. Here we see the 883 DCT have the lowest latency as well with only 25ms.

With the Sysbench transactional benchmark, the 883 DCT once again had the top performance by a fair margin with 2,181.1 TPS. 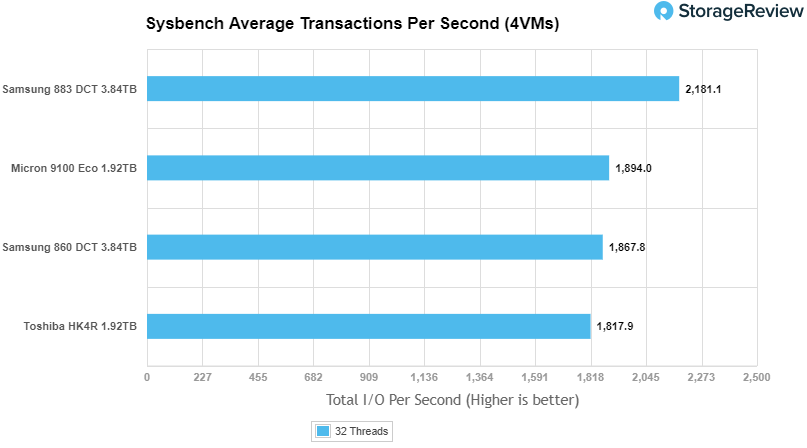 Sysbench average latency also had the 883 DCT in the lead with 58.7ms. 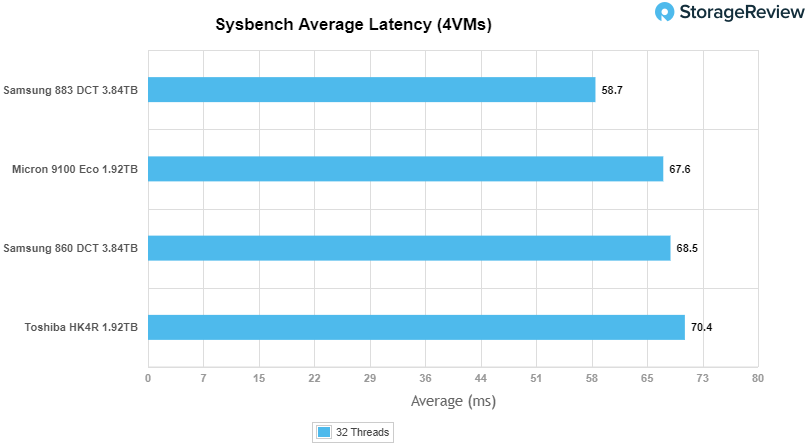 For our worst-case scenario latency (99th percentile) the 883 DCT once again took the top spot with only 103.5ms latency. 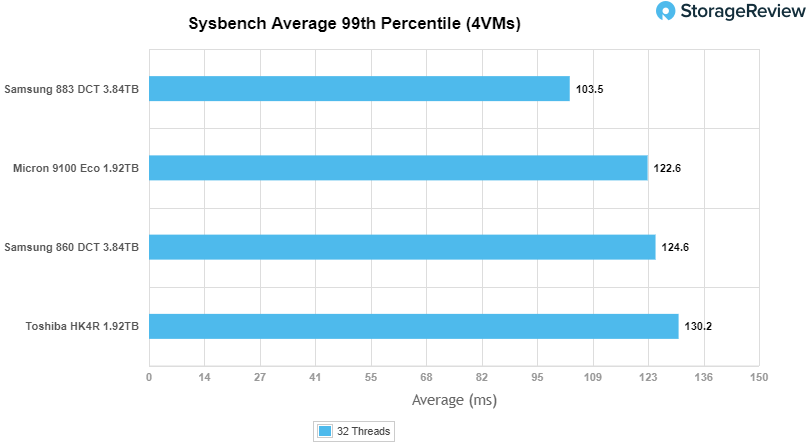 In our first VDBench Workload Analysis, Random 4K Read, the Samsung 883 DCT stayed under 1ms latency until about 72K IOPS and went on to have a peak performance of about 79K IOPS at 1.3ms latency before falling off some just behind the top performing Toshiba HK4R.

For 4K random write the 883 DCT had sub-millisecond latency performance until about 58K IOPS and tied with the 860 DCT at peak performance of 63,764 IOPS with a latency of 2ms.

Our next batch of benchmarks focus on SQL workloads. For the all the benchmarks the Samsung 883 DCT was able to deliver sub-millisecond latency performance throughout. The 883 DCT took the top spot with a peak performance of 48,472 IOPS with a latency of 657.6μs.

Moving onto Oracle Workloads once again we see the 883 DCT perform at sub-millisecond latencies for all tests. For the Oracle workload the 883 DCT peaked in the top spot at 42,262 IOPS and 726.2μs latency before dropping off slightly.

Next, we move on to our VDI clone test, Full and Linked. For VDI Full Clone Boot, the 883 DCT was the top performer with a latency that rode below 1ms almost until it peaked. Speaking of peak, the drive had a top score of 30,112 IOPS and a latency of 1.06ms.

For VDI FC Initial Login the 883 DCT saw another long stretch of sub-millisecond latency performance before peaking way out in the lead with 17,811 IOPS and 1.67ms for latency.

VDI FC Monday Login saw the 883 DCT as the top performer by a wide margin and the only drive to maintain sub-millisecond latency throughout with a peak score of 16,262 IOPS and a latency of 979.4μs.

For the VDI Linked Clone (LC) we start once again with the boot test. Here the 883 DCT maintained sub-millisecond latency throughout but just lost out in peak performance to the Toshiba HK4R. The 883 DCT’s peak score was 16,025 IOPS with a latency of 995μs.

In our VDI LC Initial Login, the 883 DCT took back the top spot and once again was the only drive to have sub-millisecond latency throughout. The drive peaked at 10,528 IOPS with a latency of 756.2μs.

Finally in the VDI LC Monday Login the 883 DCT was the top performer by a wide margin with a peak performance of 11,422 IOPS and a latency of 1.4ms.

Designed for severs and mixed workloads, the Samsung 883 DCT is a SATA interface SSD for data centers. The drive comes in multiple capacities: 240GB, 480GB, 960GB, 1.92TB, and 3.84TB. The 883 DCT leverages Samsung V-NAND with performance quoted as high as 560MB/s read and throughput as high as 98K IOPS. The drive has end-to-end data protection built in to deliver security to those that need it the most.

The Samsung 883 DCT is an ideal drive for those that leverage SATA and need reliable storage in their servers. Not only does the drive come in several capacities including a top capacity of 3.84TB, its performance is near or at the top of our SATA enterprise SSDs.