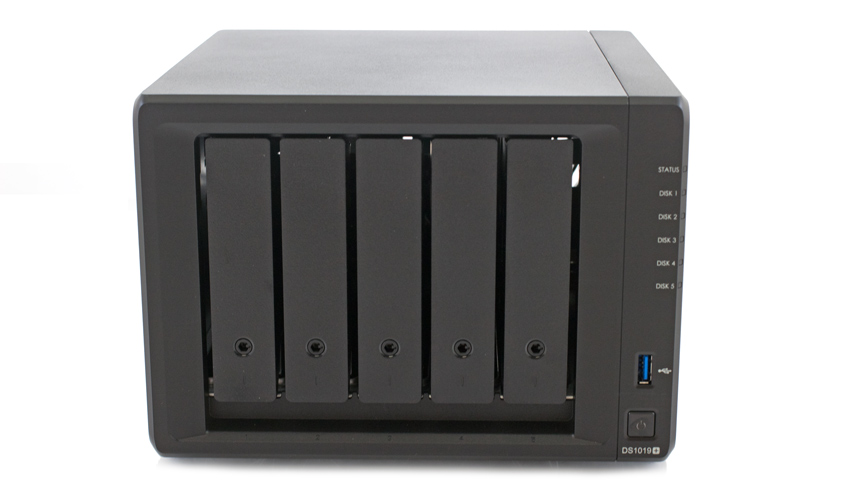 The DS1019+ comes with an Intel quad-core processor and up to 8GB of RAM. Synology states that this allows the NAS to deliver up to 225MB/s read and write even with data encryption on (the NAS supports AES-NI encryption). This makes the DS1019+ an ideal choice for real-time 4K video transcoding, the NAS supports this and comes with built-in applications for 4K video transcoding. For even faster performance, the DS1019+ has dual M.2 NVMe SSD slots to allow for SSD cache while not taking up some of the main bays.

As with all Synology NAS devices, the DS1019+ is powered by the company’s DSM OS. DSM is still one of the user friendliest and intuitive NAS OS’s on the market. While DSM has a plethora of applications (referred to as packages) there are a few that are specifically beneficial to use with the DS1019+. Theses include Video Station and Audio Station for those that wish to leverage the 2 channels of H.264/H.265 4K videos. And there are several backup applications for SOHO that need to backup important data and applications.

The Synology DiskStation 1019+ has a similar overall design to the other NAS devices released by the company. The device is small enough to fit on a desktop and has a matte black, plastic finish. Across the front are the five, hot-swappable drive bays that fit either 3.5” or 2.5” drives. On the right side is the power button, the LED indicator lights and a USB 3.0 port. 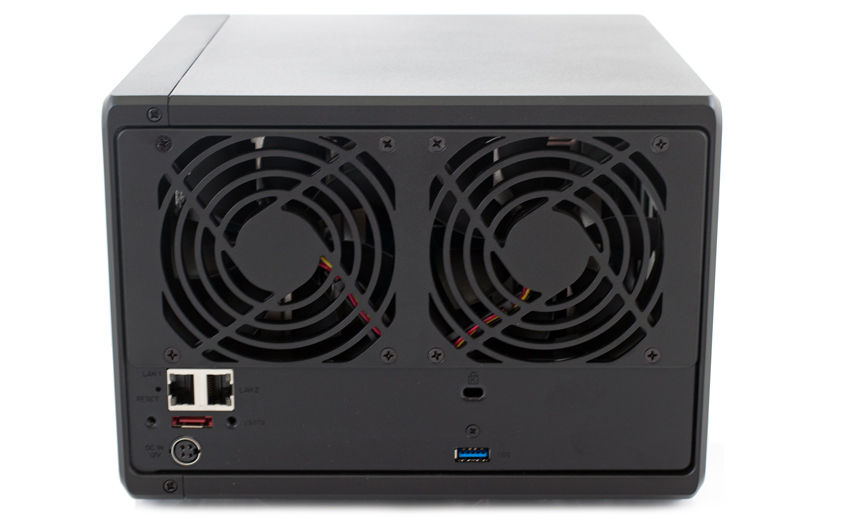 Flipping it over to the rear we see the two fans that take up the top two-thirds of the device. On the left are the two network ports, a reset button an eSATA port, and the power port. The right side has a Kensington Security Slot and another USB 3.0 port. 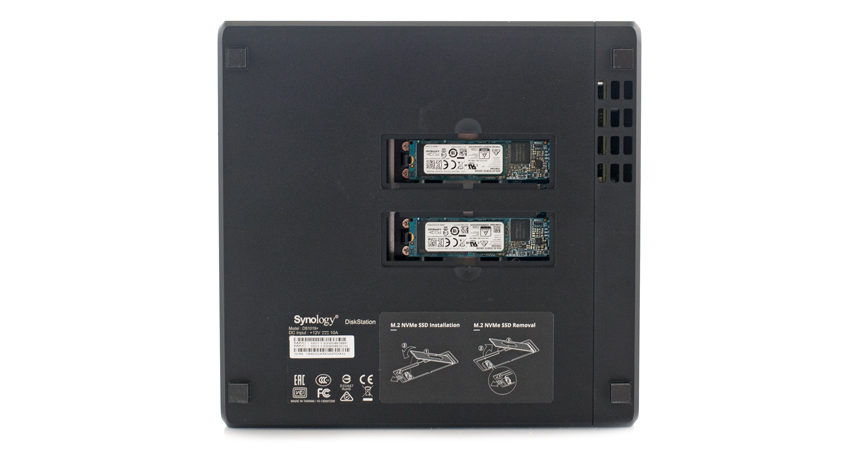 On the bottom of the device are the two M.2 NVMe slots.

In the past we have covered DSM in quite some depth. As the NAS devices change and incorporate new technology (such as M.2 drive slots), the OS updates to reflect this as well as continuing to support older models from several years back. 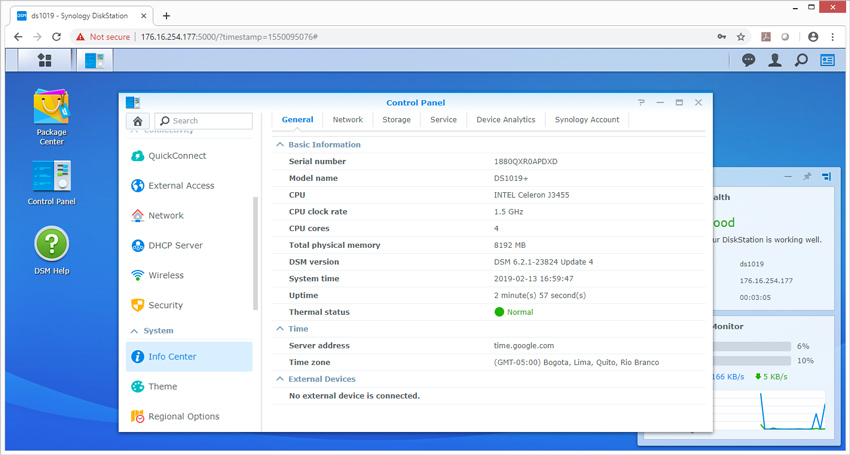 Something unique to the DS1019+ is the M.2 drive slots for SSD cache. While SSD cache is a feature that has been supported for some time, this is new as it allows for SSD cache to speed up workloads without taking up drive bays. The SSD cache screen gives users a quick run down on information such as where the cache is mounted, its mode type, RAID type, the ability to repair or remove it, the cache usage, read hit rate, and the ability to drill down into the SSD devices. 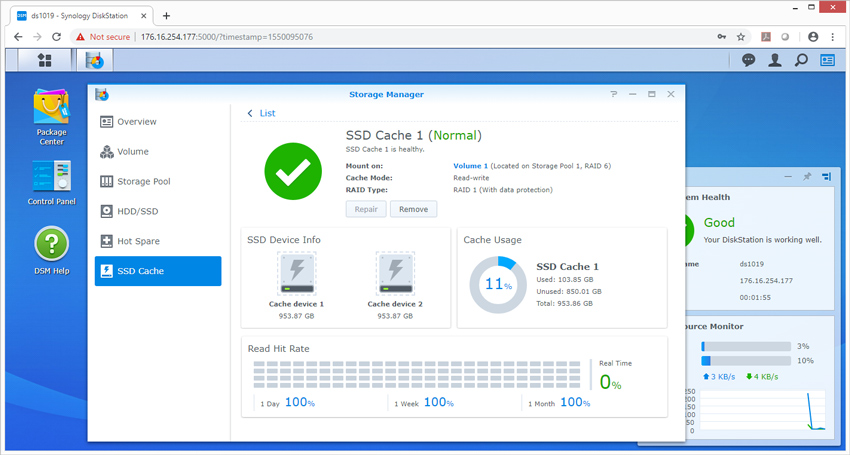 For our testing we configured the Synology DiskStation in RAID6 in both iSCSI and CIFS. We ran each test with the SSD cache off and on. For HDD we used Toshiba N300 NAS 8TB and for the SSD cache we used two Toshiba XG5 NVMe 1TB. This is not a comparison of the SSD cache on or off, the SSD cache will provide better performance. This reflects what to expect if users choice to leverage it or not.

Compared to the fixed 16 thread, 16 queue max workload we performed in the 100% 4K write test, our mixed workload profiles scale the performance across a wide range of thread/queue combinations. In these tests, we span workload intensity from 2 threads and 2 queue up to 16 threads and 16 queue. In throughput, CIFS double the performance in our SSD-cache configuration compared to iSCSI, posting a range of 10,232 IOPS through 10,452 IOPS. In our HDD configuration, iSCSI had the best performance with 455 IOPS to 1,656 IOPS. 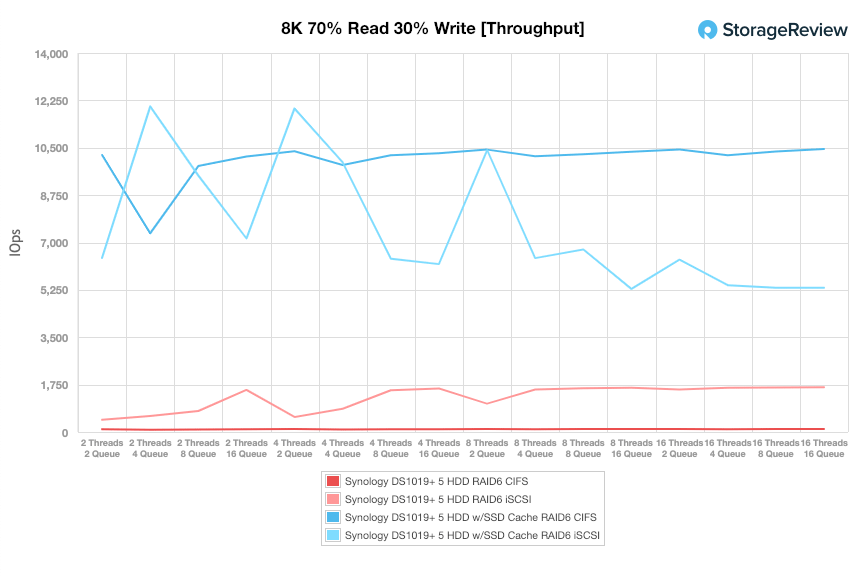 In average latency, CIFS connectivity showed the best performance in our SSD configuration (3.12ms to 12.24ms), while iSCSI was the best in our HDD set up, posting 8.78ms to 154.43ms. 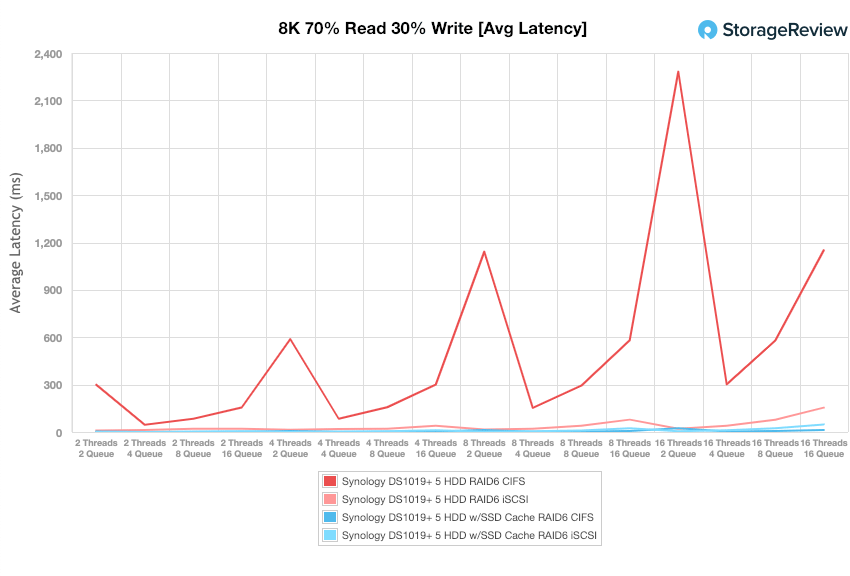 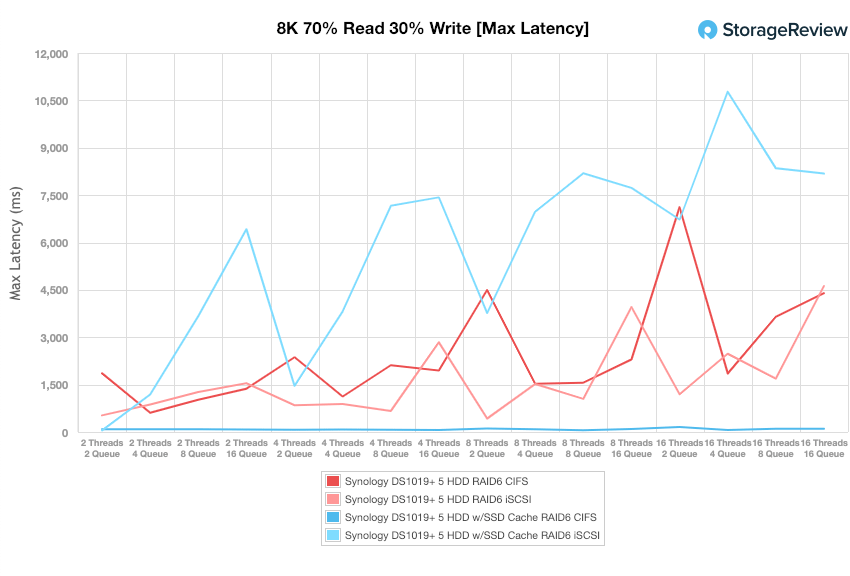 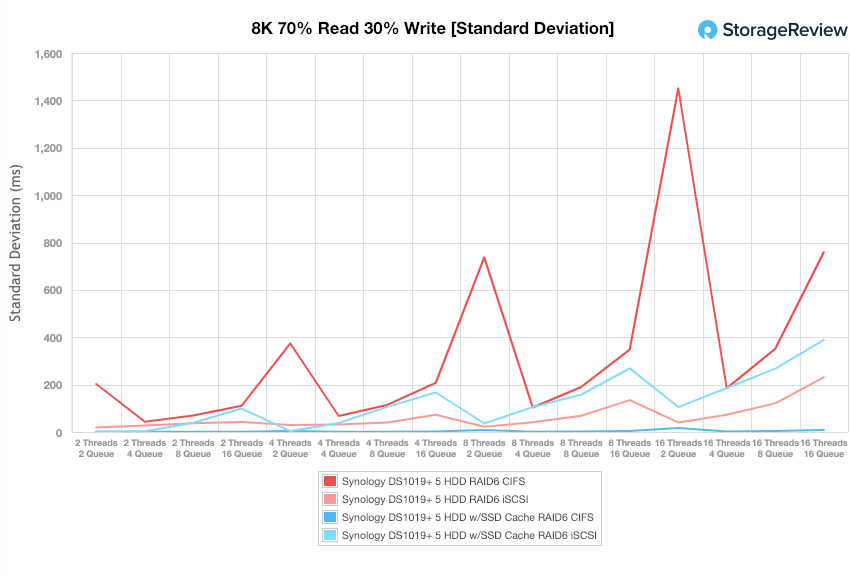 The Synology DiskStation DS1019+ is the newest edition to the company’s more performant Plus line. This 5-bay NAS is aimed at SOHO and home users that need a bit more of a performance kick. In fact, it is ideal for those that work with or need real-time 4K video transcoding. The hardware combined with built-in applications make this an ideal solution for 4K transcoding. The NAS leverages Synology’s award winning DiskStation Manager Operating System and is expandable to 10 bays through the DX517 expansion unit.

Enabling the SSD cache saw a performance improvement in most tests, making the most dramatic difference in CIFS configuration. For example, we saw IOPS increase from 69 to 10,474 in 4k while average latency dropped from 3,681.1ms read to 24.4ms read. However, there were a few cases where performance dropped slightly with the SSD cache enable such as 8K iSCSI and in large block 128K the read scores improved while the write scores dropped some.

The Synology DS1019+ is a small NAS that can bring the performance for small and home office, especially those that deal with video transcoding. The NVMe M.2 SSD cache on the bottom can bring certain workloads to much higher performance and lower latency.