Traditionally, 1.8 inch hard drives have mostly been relegated to service in media players and mobile applications. With increased interest in ultraportable laptop computers, however, drive manufacturers have been ramping up the level of innovation in small-footprint storage. In many ways, Samsung’s ultra-tiny, high-capacity external – the Samsung S1 Mini – is the direct beneficiary of these technological advances.

Traditionally, 1.8 inch hard drives have mostly been relegated to service in media players and mobile applications. With increased interest in ultraportable laptop computers, however, drive manufacturers have been ramping up the level of innovation in small-footprint storage. In many ways, Samsung’s ultra-tiny, high-capacity external – the Samsung S1 Mini – is the direct beneficiary of these technological advances. 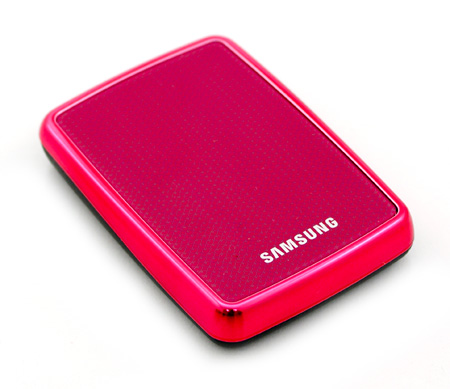 It’s been nearly a year since Samsung launched the 250GB, 1.8 inch SpinPoint N3U drive that powers the largest S1 Mini (the drive also comes in 120, 160, and 200GB variants). But when it comes to outright storage capacity, the 250GB N3U still stands with the leaders in this form factor. If you thought that 1.8 inch drives were only for "toys" like MP3 players, the S1’s serious file stashing capabilities are ready to challenge that assumption.

Simply put, the S1 Mini is tiny. An order of magnitude smaller than even the smallest 2.5 inch external drives, the S1 enclosure measures a scant 2.5 by 3.5 inches across, and around half an inch deep. Even encased in its included leather holster (think Blackberry), the S1 is smaller than a deck of cards or a mid-size cell phone. 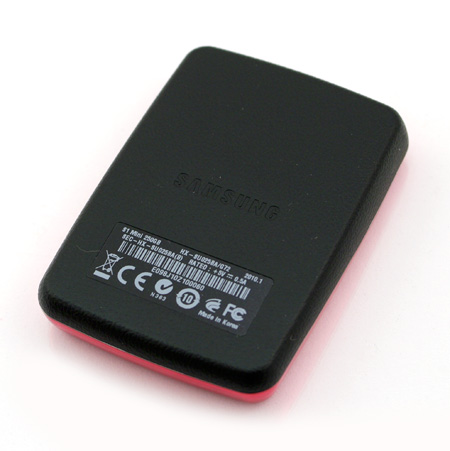 Keeping with the portability theme, Samsung supplies an ultra-short cable with the S1 as well – though using the included cable (more of a dongle, really) often leaves the drive itself hanging awkwardly from a USB port. If you’d rather tether your S1 with something more substantial, the enclosure’s standard mini-USB connection makes finding a longer cable simple enough.

If you feel the need to make a fashion statement with your external hard drive, the S1 will certainly oblige. The Mini’s composite enclosure, which comes in six texture/color combos, features a textured black plastic base joined to a chrome-and-gloss top cover. The S1’s aforementioned USB 2.0 mini-connector (which also supplies power from the host computer) and a recessed status LED are the only breaks in the drive’s lightly rounded, clean-line look. 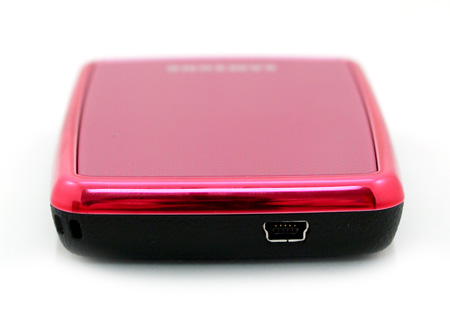 It’s a handsome device for sure, and a seemingly well-built one besides: In spite of its light weight, our test unit exhibited tight seams and a solid, thick shell. With its lineage in mobile devices, the SpinPoint drive within is also designed to withstand a 50-centimeter drop, according to Samsung – especially important for a device whose pocket-size profile may make it more likely to encounter rough handling.

The tightly sealed, fastener-free S1 enclosure is not conducive to dissection. Moreover, even if you could figure out a way to get inside the Mini S1, the use of Samsung’s aforementioned SpinPoint N3U drive makes this device even more of a "no user serviceable parts inside" black box than many compact externals. That’s because the N3U includes the bridge between the disk’s native PATA interface and the enclosure’s USB connection right on the drive unit itself. This space saving design arrangement means that unless you’re planning on dropping in another identical SpinPoint, drive-swapping isn’t really an option.

On paper, at least, the S1’s 250GB Samsung SpinPoint N3U drive is hardly a speed demon. The trade-off for packing 250GB (on a pair of 125GB platters, in this case) into credit-card-size spaces comes in the form of slower spindle speed. The N3U only spins up at 3600 RPM, leaving it a step behind its primary competitor in the 250GB/1.8 inch market – the Toshiba MK2529GSG.

While the comparison is in some ways not a fair fight, a lack of direct competitors in 1.8 form factor means that we’ve opted to chart the S1 Mini against some of the compact 2.5 inch externals that we’ve tested lately. Right from the start, the S1’s slight interface and speed handicaps make themselves known: The drive failed to reach USB-saturating transfer rates in our CrystalDiskMark tests, peaking at just over 30Mb/s under best possible conditions. 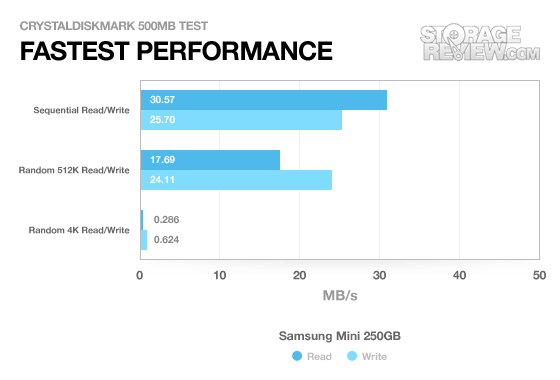 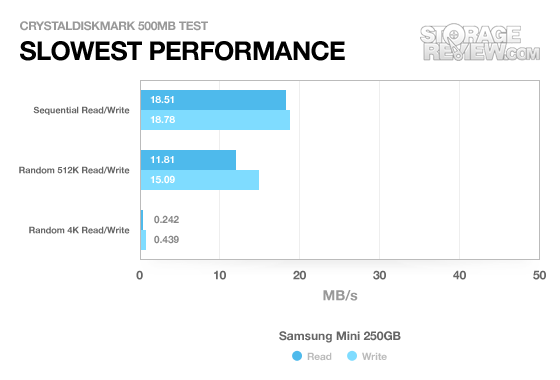 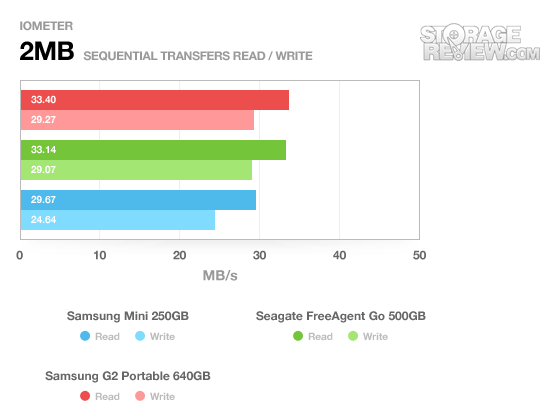 Not surprisingly, the SpinPoint drive also failed to produce class-leading numbers in the above IOMeter sequential transfer test. However, random transfer testing on both of our synthetic benchmarking platforms closed the performance gap somewhat. 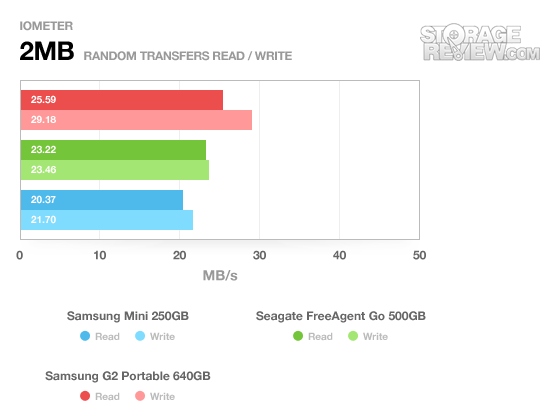 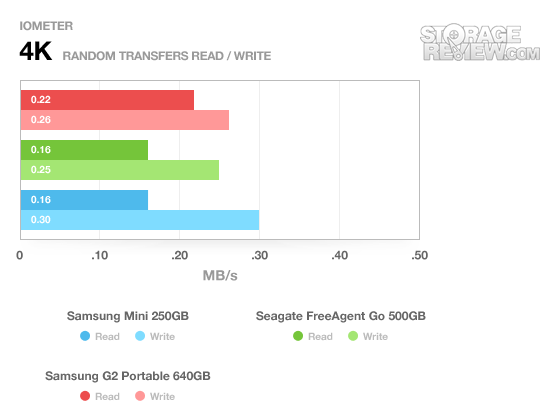 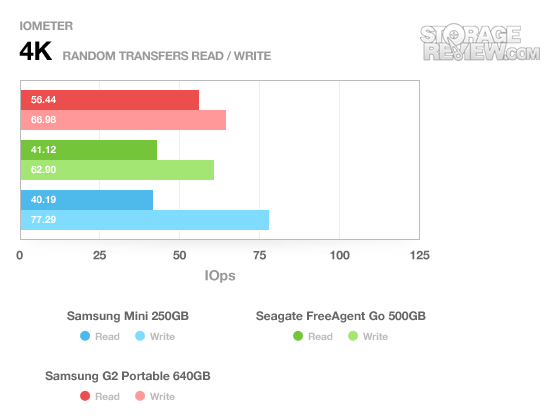 The above 4K tests in particular play to the dual-platter N3U’s strengths, with the drive besting its generally faster competitors in both write performance and operation volume. Likewise, the S1 proved quicker on the uptake than its larger peers, posting a small but substantive improvement in average write latency, and a truly impressive longest time of under 40ms. 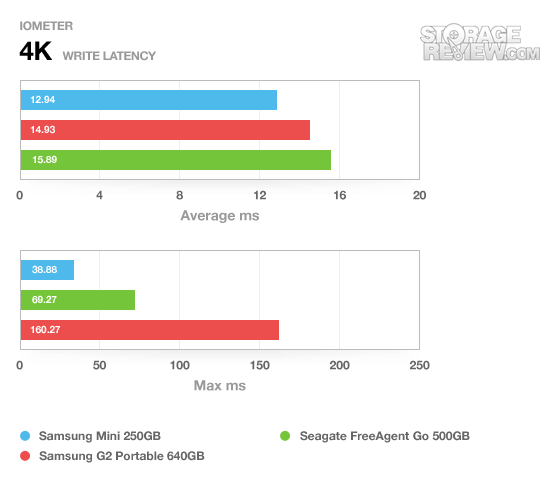 Samsung pre-loads the S1 with the same two pieces of software – Samsung Auto Backup, and the enigmatic SecretZone – that came with the recently reviewed Samsung G2, and our general experience with these two add-ons remains much the same. Auto Backup is a feature-rich data protection suite, though novice users can easily get overwhelmed by its many menu options. SecretZone is another matter: Designed for advanced users and (often) confusingly implemented, this virtual private drive creation tool will likely go right over the heads of most consumer users – and Samsung’s own documentation doesn’t provide much assistance. As we noted with the G2, the inclusion of SecretZone seems like an odd choice on a squarely consumer-focused device like the S1 Mini.

As an aside, the S1 Mini comes from the factory with platform-neutral FAT32 formatting, allowing both Mac and PC users to make use of the device without reformatting. While the drive itself is setup for cross-platform compatibility, though, Macintosh users should note that the supplied software is, as is so often the case, PC only.

Like other Samsung externals, the S1 Mini is covered under a three-year, non-transferable warranty.

Small external drives are certainly nothing new, but the S1 Mini does manage to break new ground in offering up a whole lot of storage in an unbelievably small device with a healthy dose of style. While it seems doubtful that the S1 meets a pressing need for even smaller high-capacity storage (the current crop of 2.5 inch external drives aren’t exactly bulky or difficult to transport), the concept remains novel. And while the S1 Mini commanded a hefty premium over its competitors when it first launched, this family of devices – although still at least 20% more than comparable 2.5 inch storage – continues to creep down in price.

For those willing to shell out a little extra cash for a small footprint, Samsung’s highest capacity S1 Mini provides a robust 250GB of storage and ample speed in a truly head-turning enclosure.