The 40GB X25-V is part of Intel’s new Value SSD line which aims to merge both performance and value for consumers who are starting to think about upgrading to a SSD, or want to use an SSD as a boot drive. Right now this new SSD has a retail price of $125, making it the cheapest Intel SSD, and half as much as the 80GB X25-M model. While advertised performance stats of 170MB/s read and 35MB/s write don’t exactly turn a lot of heads, should you consider picking one of these up? Read our review to find out.

The 40GB X25-V is part of Intel’s new Value SSD line which aims to merge both performance and value for consumers who are starting to think about upgrading to a SSD, or want to use an SSD as a boot drive. Right now this new SSD has a retail price of $125, making it the cheapest Intel SSD, and half as much as the 80GB X25-M model. While advertised performance stats of 170MB/s read and 35MB/s write don’t exactly turn a lot of heads, should you consider picking one of these up? Read our review to find out. 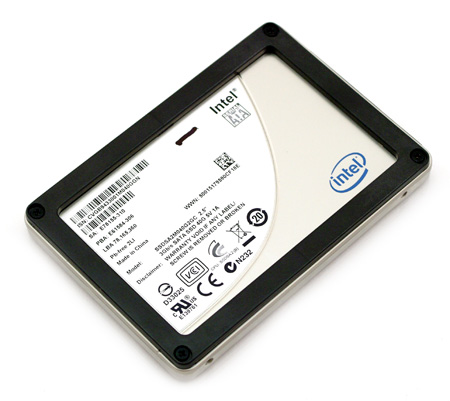 The Intel X25-V shares the same body as the popular X25-M which we reviewed last month, as such some parts are borrowed from that review. 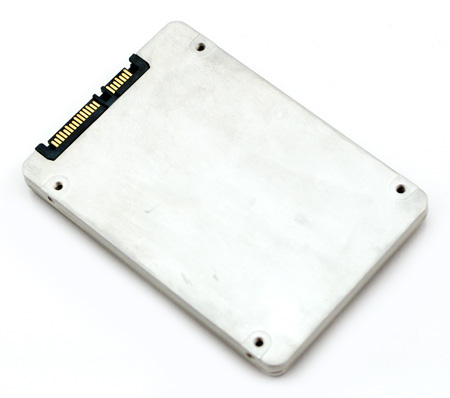 The Intel X25-V has a clean aluminum body with a plastic trim ring secured to the top border of the drive. The X25-V has a very basic OEM look to it without a lot of the flashy looks of other SSDs currently on the market. What it does offer is a down-to-earth design that looks sophisticated and durable.

Case durability is excellent and besides the SATA connector you could probably toss this drive at a wall and cause more damage to the wall than the X25-V. The case has no give at all and feels like a solid block of metal. The bumper ring around the top allows the drive to fit multiple form-factors depending on the requirements of the desktop or laptop it is being installed in. The drive height without the bumper is 7mm while the height with it installed is 9.5mm (standard notebook drive height).

The Intel X25-V is very easy to take apart after removing four Phillips head screws. The same screws that hold the 2.5mm shim to the body of the drive hold the two case halves together. Once those are removed the entire assembly pops apart. 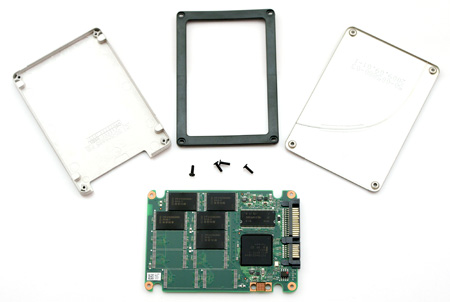 Inside we see the neatly designed circuit board that utilizes only a single side of the PCB. Intel uses their own pc29as21ba0 controller and 29f64g08camdl flash memory. The board is made up with five 8GB modules with a 32MB Micron DDR buffer. 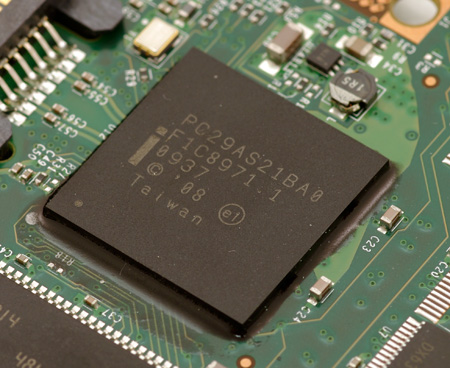 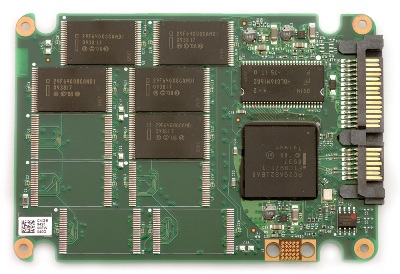 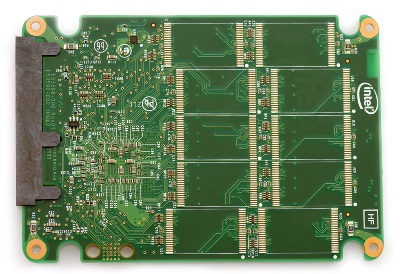 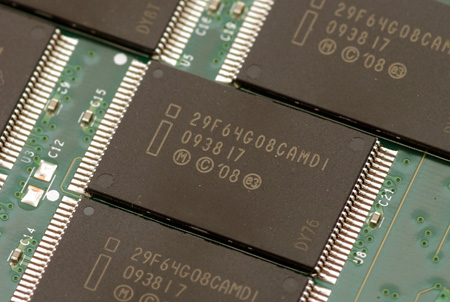 The Intel X25-V advertises the some of the lowest write speeds out of any other SSD on the market. When we first saw the press release on this drive with the 170MB/s read speed and 35MB/s write speed we were somewhat shocked that Intel of all places would release something this slow. In our 2MB sequential IOMeter test we measured a write speed of 40MB/s and a read speed of 183MB/s. Faster than the advertised speed but still pretty slow.

Random 2MB transfer tests showed slightly slower read speeds of 143MB/s and a small bump in write speeds bringing the amount to 41MB/s. Still not Earth-shattering by any means. 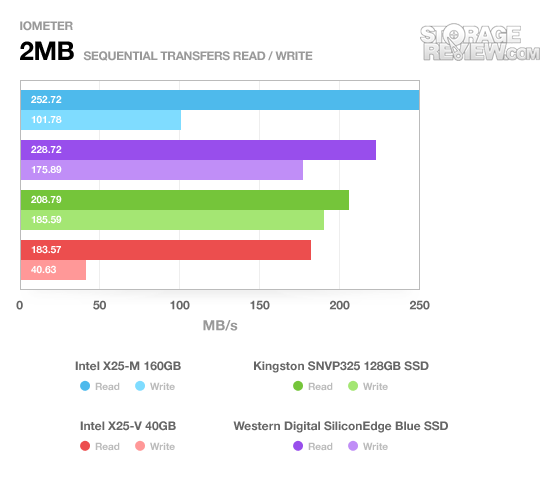 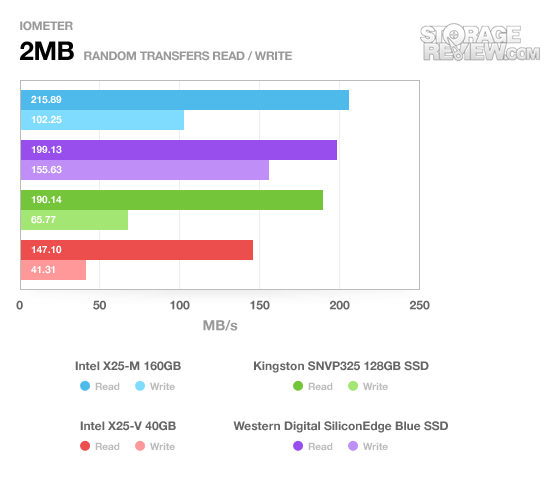 Our 4K random test is where the Intel X25-V’s performance starts to make us pay attention. It has a HUGE lead over the other mid-range SSDs and it’s just slightly under the 160GB X25-M. Just like its faster brother, the Intel X25-V has a huge advantage in other drives in random write performance. Random read performance is still very good and slides into second place under the X25-M. 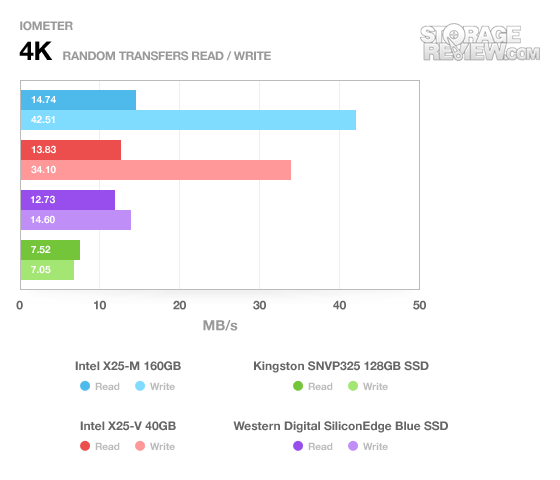 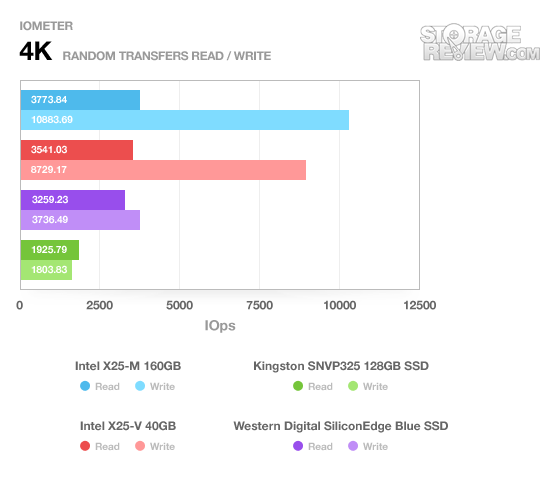 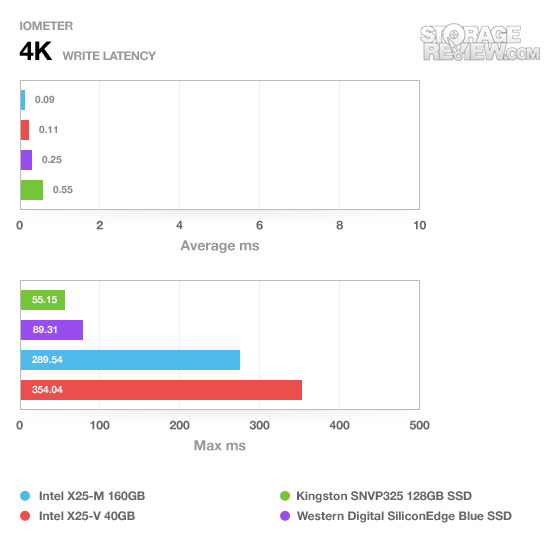 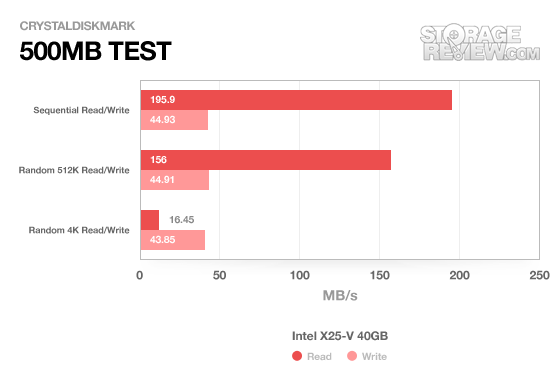 Our IOMeter server profile tests show the Intel X25-V as having excellent Native Command Queuing (NCQ) support. The X25-V ramps up quickly in I/O speed as the queue depth increases. 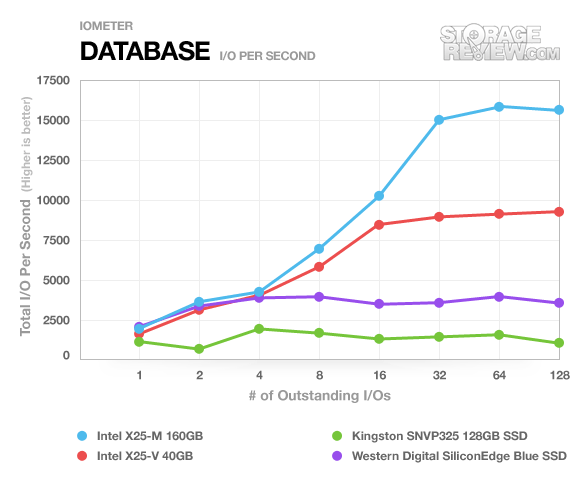 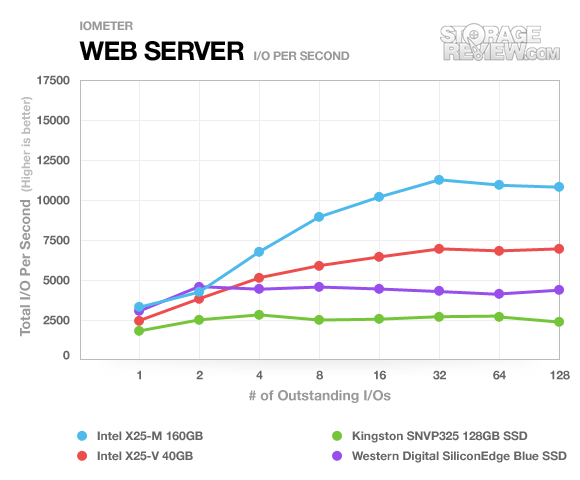 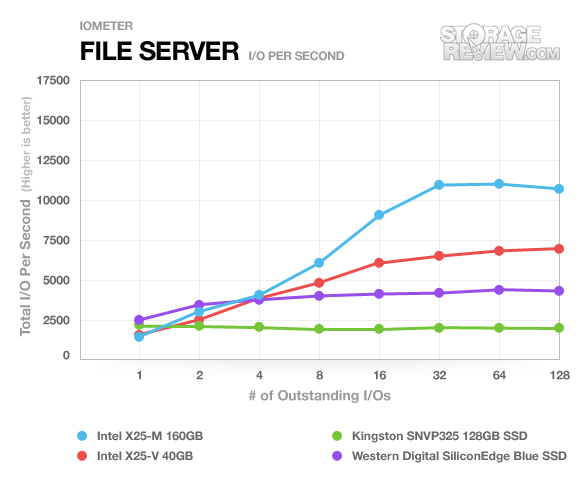 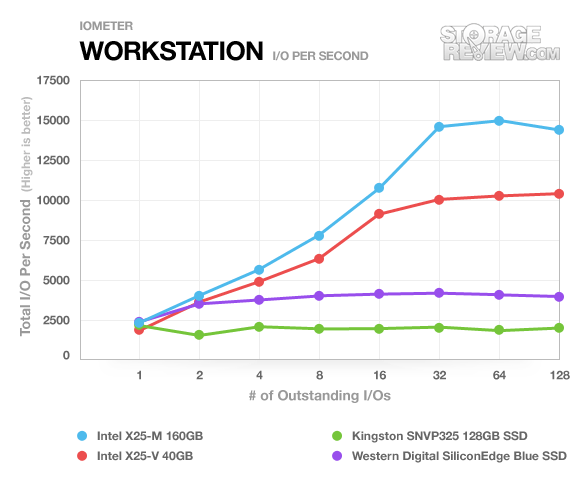 For the average reader looking at our reviews it might be hard to translate high transfer speeds or random 4K performance into real-world performance. In some cases we have seen drives perform exceptionally well in transfer speeds but plummet when it came to our real-world test. With our custom StorageMark 2010 traces we hope that no matter what, any reader can see how drives stack up against each other in everyday situations. 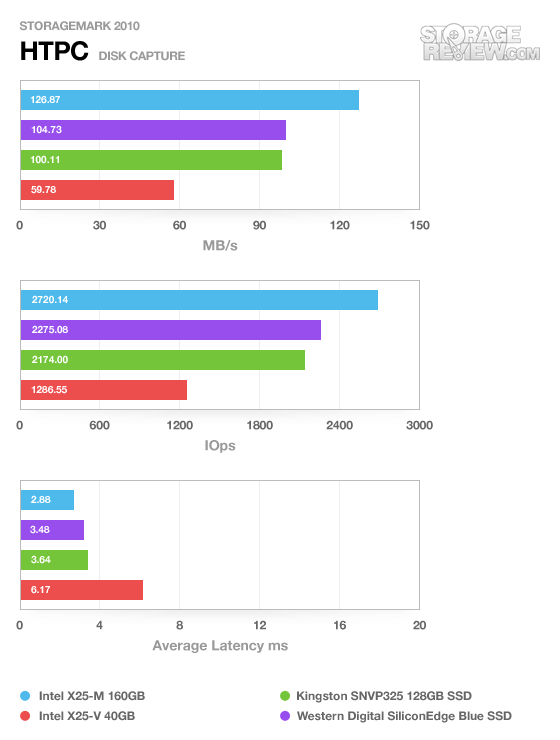 In our first HTPC test the slow sequential write speeds translated into poor performance in this test. All the drives that had significantly greater write speeds blew it away without much effort. Where most of the competing drives average 100MB/s transfer speeds and above, the X25-V scored around 60MB/s. 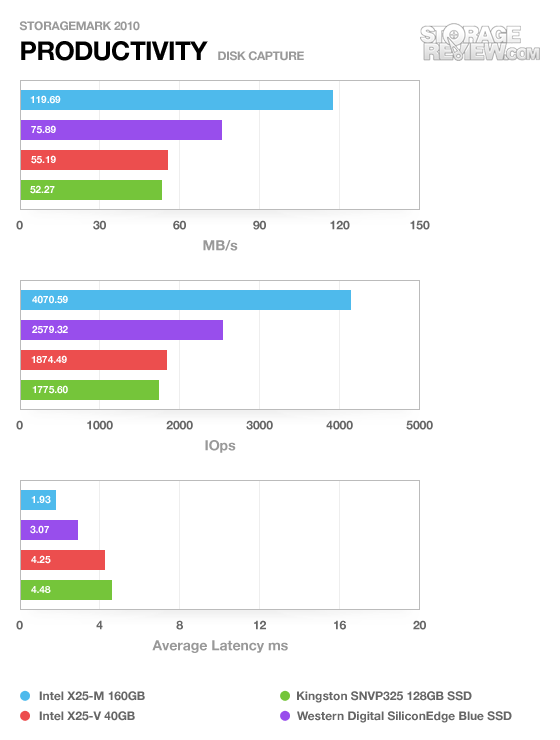 In this test the X25-V had a fighting chance and managed to stay inside the pack since its random write speed advantage played a larger role. While it wasn’t able to keep up with more expensive drives such as the Intel X25-M or the Western Digital SiliconEdge Blue, it was able to beat the mid-range Kingston SNVP325. 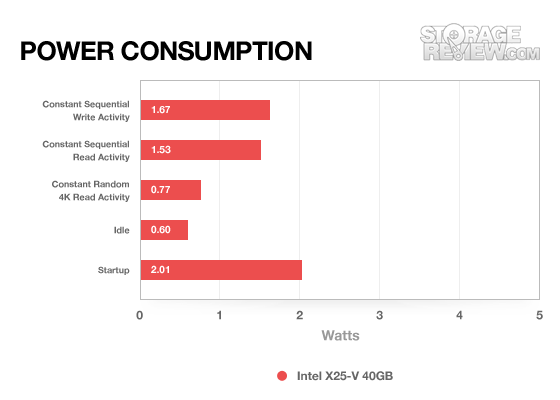 The Intel X25-V had very good power consumption, and with significantly less flash memory than its cousin the X25-M, showed less power draw while being accessed. TRIM activity on this drive wasn’t as prolonged on other drives and hard to measure, so we left it out of the chart. Since this drive will be sitting at idle frequently when used in a notebook or desktop, users should take notice of the low 0.60 watt idle power draw, which was identical to the X25-M.

Intel gives a three-year warranty on their current SSD models including the X25-M. Three years is currently the most offered by any SSD manufacturer and is also matched by Western Digital, Kingston, and others.

The Intel X25-V won’t win any outright transfer speed competitions, but unlike many of the starter SSD models currently on the market it packs a huge punch in random write performance. In our tests we found the X25-V to perform well in our StorageMark Productivity test, which is what we would like to see for drives targeted towards consumers as "boot drive upgrades". In this area we see a higher need for fast random access instead of high sequential read and write speed. If you are in the market for a cheap beginners SSD and don’t want to spend a ton of money, don’t let the Intel’s 35MB/s advertised write speed fool you into thinking the X25-V being some super slow SSD.

At the near $100 price-point the 40GB Intel X25-V is hard to pass up if you are looking to add a SSD boot-drive to your system.