Designed for ultra-slim notebook PCs and workstations, the Samsung SM951-NVMe is the industry’s first M.2 NVMe PCIe to hit the market. Samsung has been offering an AHCI-based PCIe 3.0 version of its SM951 line for several months now. With this new highly-anticipated NVMe edition, Samsung is adding a powerful and welcomed drive to its quality SSD portfolio all the while reinforcing its dominance in the flash memory market. Samsung also has indicated that it will be incorporating its 3D V-NAND technology into the SM951-NVMe sometime in the future, which will further increase the drive’s density as well as help it to boast even better performance.

Designed for ultra-slim notebook PCs and workstations, the Samsung SM951-NVMe is the industry’s first M.2 NVMe PCIe to hit the market. Samsung has been offering an AHCI-based PCIe 3.0 version of its SM951 line for several months now. With this new highly-anticipated NVMe edition, Samsung is adding a powerful and welcomed drive to its quality SSD portfolio all the while reinforcing its dominance in the flash memory market. Samsung also has indicated that it will be incorporating its 3D V-NAND technology into the SM951-NVMe sometime in the future, which will further increase the drive’s density as well as help it to boast even better performance. 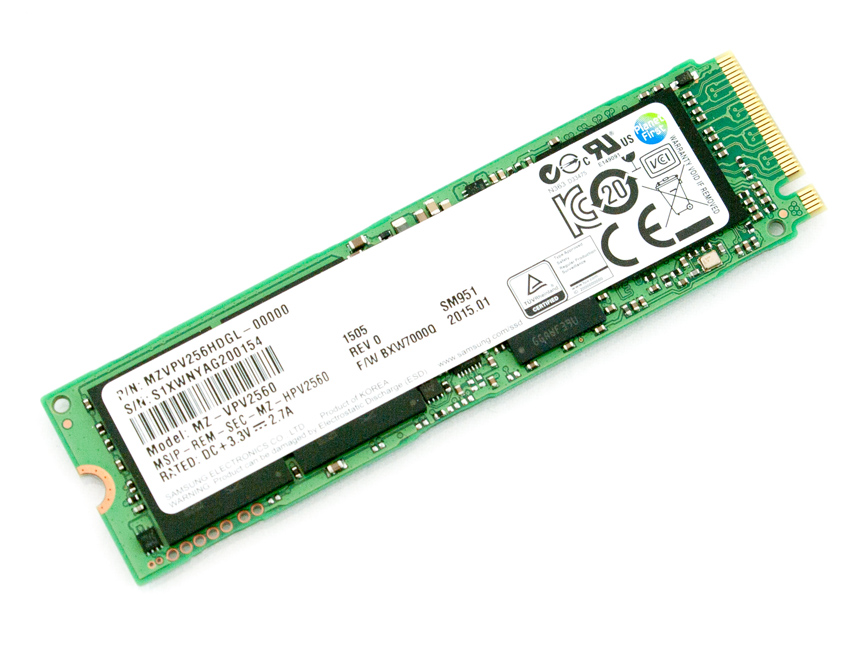 Because Samsung’s new drive uses the NVMe protocol, it brings various performance improvements. As such, looking at its potential performance, the new SM951-NVMe is quoted to reach sequential data read and write speeds up to 2,260MB/s and 1,600MB/s, respectively. These figures are slightly better than the PCIe 3.0 version, which touted a maximum of 2,150MB/s read and 1,500MB/s read for the 512GB model. Looking at its random read operations specifications, Samsung indicates that the SM951-NVMe can process 300,000 IOPS, which is more than twice the speed of the 130,000 IOPS rate of the PCIe version. Both models are equipped with Samsung’s UBX 3-Core controller technology. Even though SM951-NVMe packs a huge haymaker in the performance column, the drive’s thickness is roughly 3.73 millimeters when equipping chips on both sides of the board and weighs less than 7 grams. This tiny SSD will likely be a huge boost in performance in any scenario for anyone looking to upgrade their ultra-slim notebooks or PCs with an M.2 slot.

Like its AHCI-based equivalent, the SM951-NVMe uses the L1.2 low-power standby mode, allowing all high-speed circuits to be turned off when the host computer is in sleep mode or in hibernation. As a result, the overall power consumption SM951-NVMe is significantly reduced to under 2mW.

Samsung SM951-NVMe M.2 SSD is much smaller 2.5 inch SSD and offers a thickness of under 4mm. It looks virtually identical to its brethren, lacking any casing, which leaves its components exposed and vulnerable to damage. As a result, users must take care in transporting the device.

The front side of the drive comes with a sticker, which partially covers the NAND chips. This displays various information pertaining to the drive, including the model number and certifications. The side opposite of the connectors sports an M key notch to denote PCIe x4 and SATA compatibility. All capacities use the Samsung UBX 3-Core controller and Samsung 16nm MLC NAND.

We will be comparing the Samsung SM951-NVMe to the following drives in this review:

In our first test, we measured 2MB sequential performance from Samsung SM951-NVMe, which posted an impressive 1,820.4MB/s read and 1,191.9MB/s write. While the drive had better read activity compared to the PCIe model, it did record weaker write performance.

When looking at average write latency, the SM951-NVMe continued its dominance with an impressive average response time and peak latency at 0.0221ms and 0.5787ms, respectively. 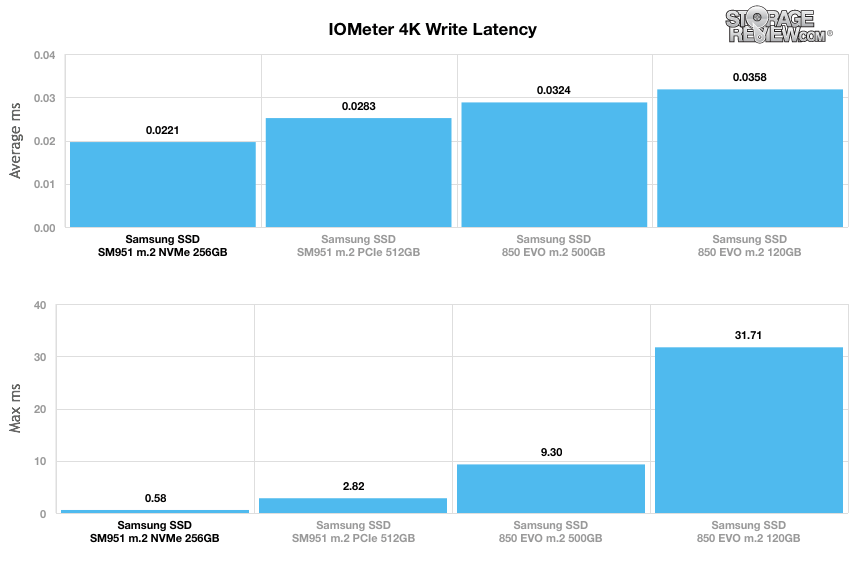 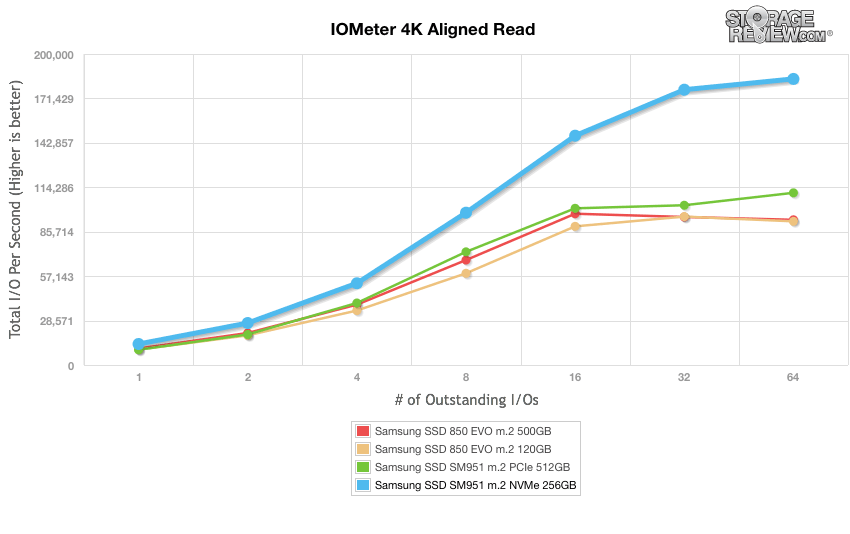 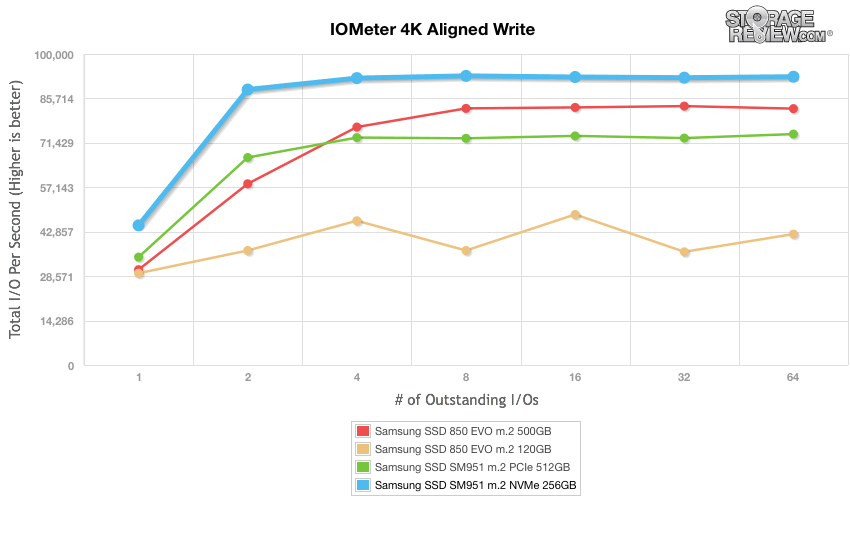 The first is our database profile, which consists of a 67% read and 33% write workload mix primarily centered on 8K transfer sizes. In this trace, we recorded the Samsung-NVMe with a range of 10,818.31 IOPS to an impressive 108,711.27 IOPS in the terminal queue depths, which was over 30,000 IOPS more than the PCIe version. 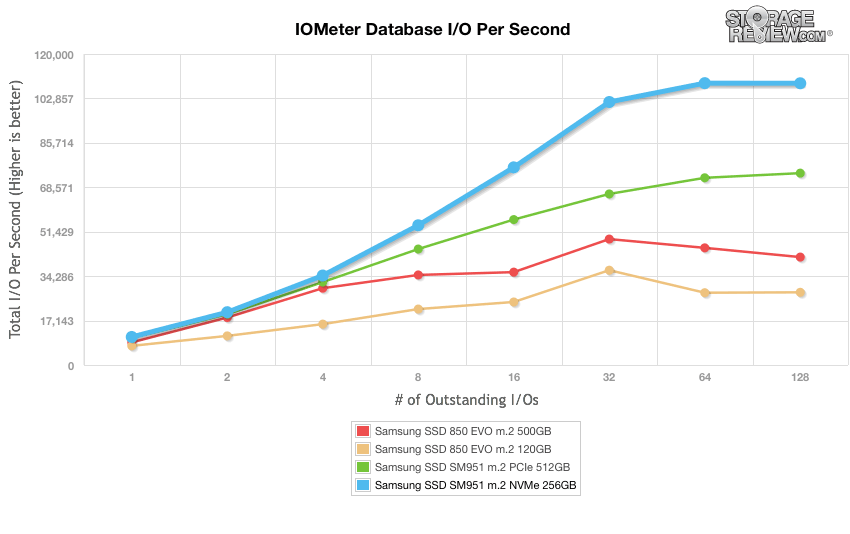 The next profile looks at a webserver, with 80% read and 20% write workload spread out over multiple transfer sizes ranging from 512-byte to 64KB. Here, the Samsung SM951-NVMe had an initial throughput of 9,802.45 IOPS and 93,649.20 IOPS in 128QD once again dominating the leaderboard with impressive results. 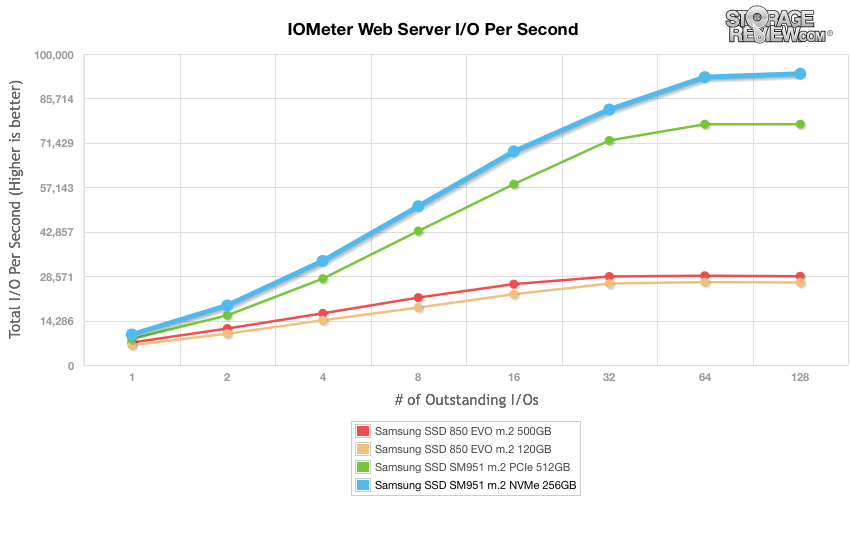 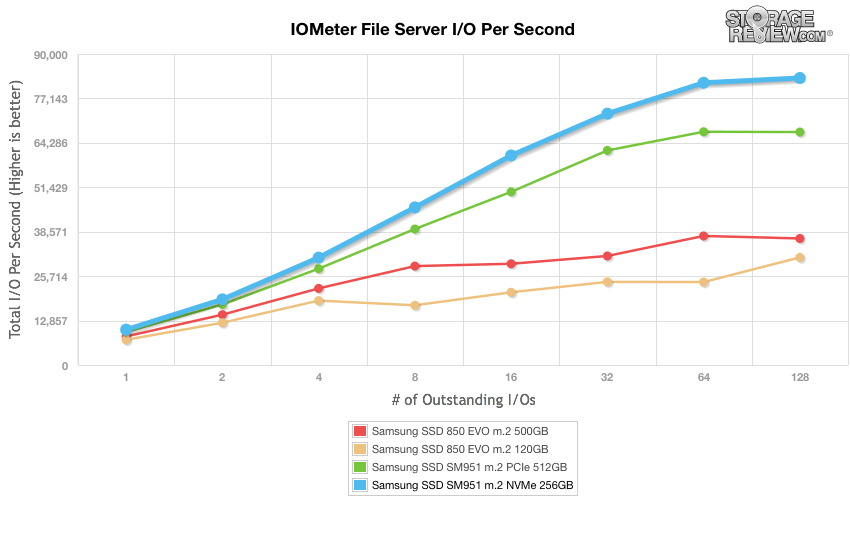 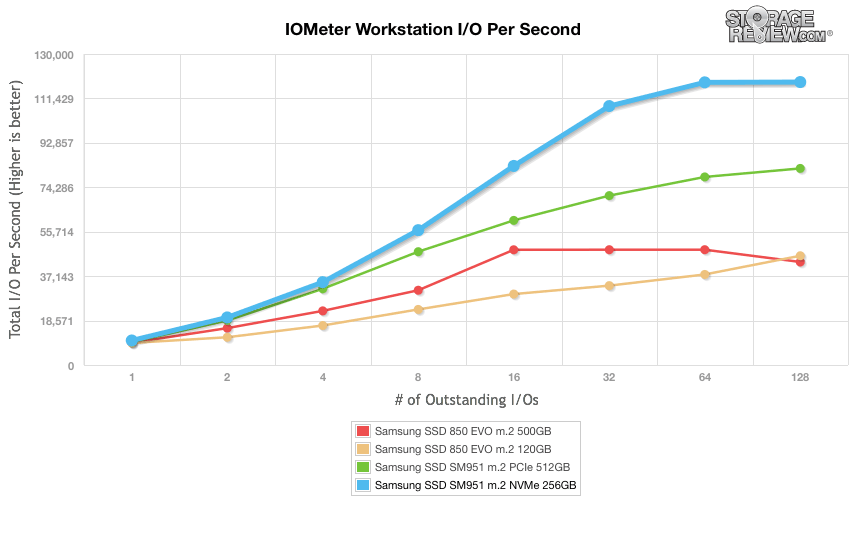 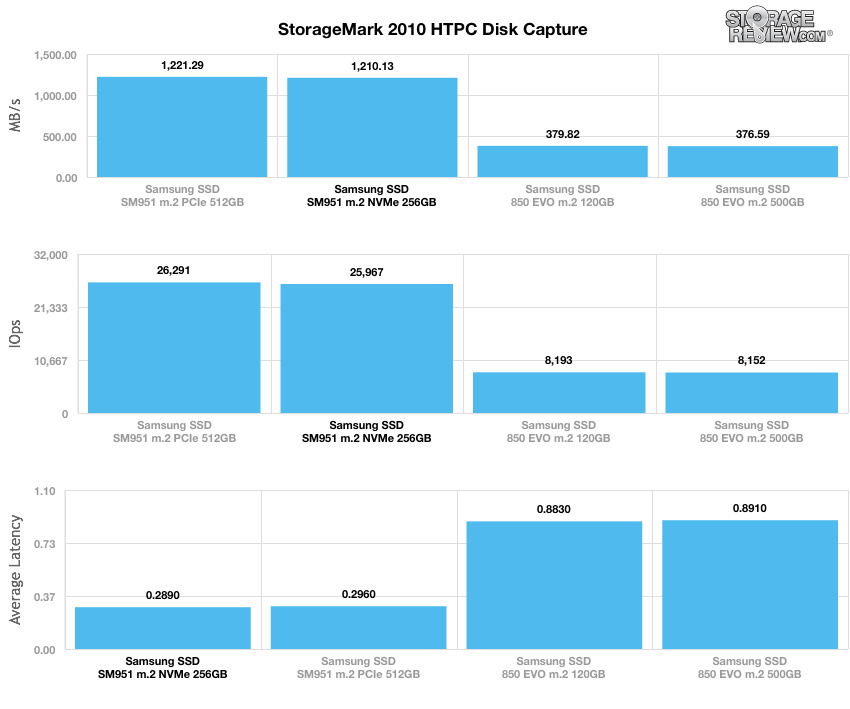 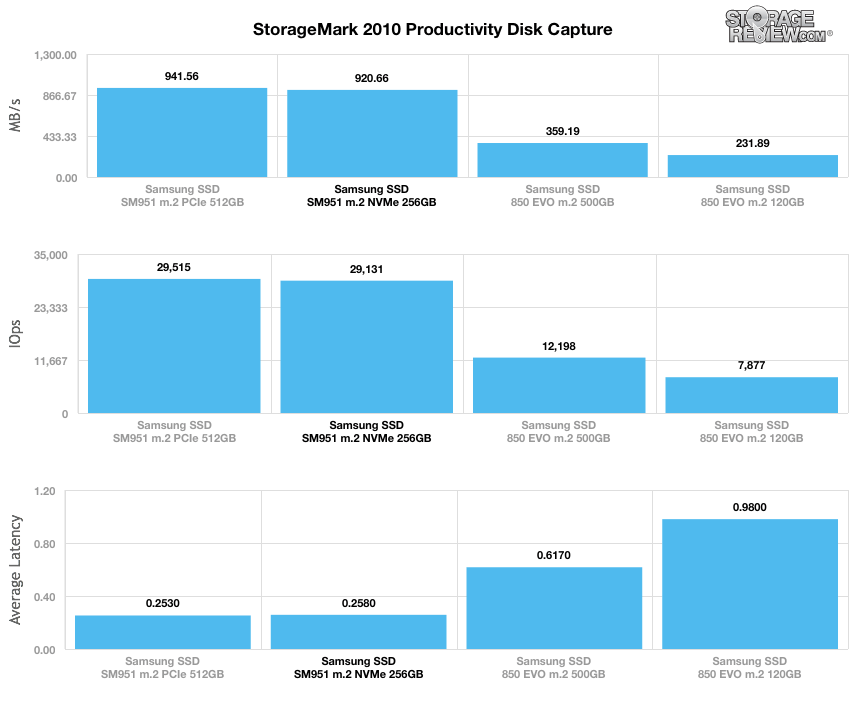 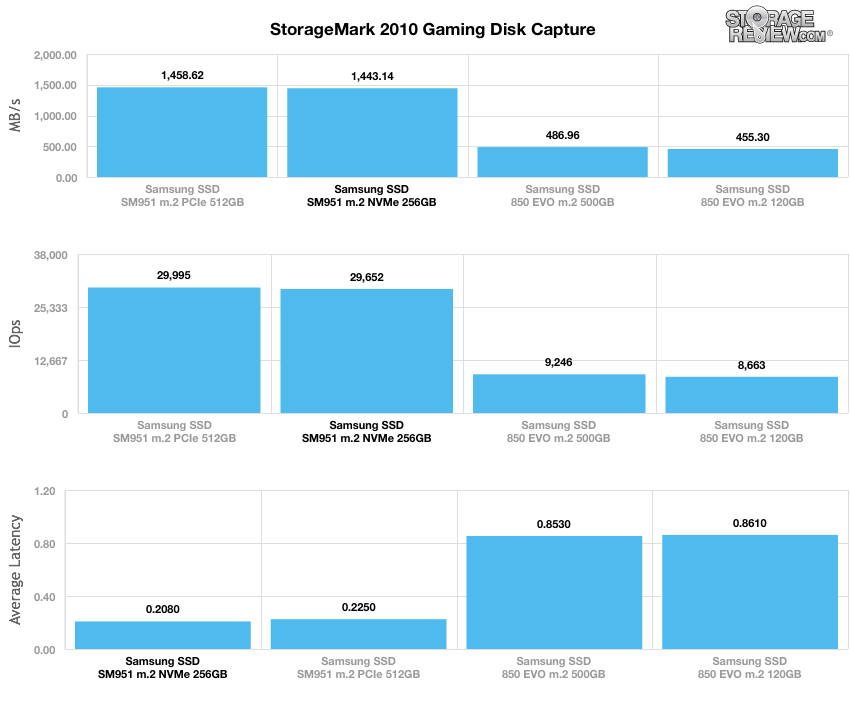 The highly anticipated Samsung SM951-NVMe M.2 PCIe SSD is quite a remarkable drive, impressing us with some pretty incredible throughput during our benchmarking tests. The drive is itself comes in capacities up to 512GB; however, like the PCIe model, we would have liked to see Samsung offer a 1TB model on top of the available capacities. Under the hood, the SM951-NVMe is equipped 16nm NAND as well as the same Samsung UBX 3-Core controller as its brethren. This hardware is neatly stored inside a tiny M.2 form factor that weighs less than seven grams, allowing enthusiasts to upgrade their compatible ultra-slim notebooks in a pretty substantial way. Samsung also designed the SM951-NVMe with the L1.2 low-power, extremely power efficient standby mode, which allows all of its high-speed circuits to be turned off when the host computer is in sleep mode or in hibernation.

When diving into its performance, the SM951-NVMe posted tremendous results overall, which was highlighted by our consumer synthetic benchmarks. To summarize, our 2MB sequential transfer test showed the SM951-NVMe with a top-in-class 1,820.4MB/s read and 1,191.9MB/s write, while our random workload recorded read and write activity at 1,417.9MB/s and 1,076.1MB/s, respectively. Moving to our smaller 4k random transfer benchmarks at QD1, the Samsung SM951 posted an incredible 13,497.5 IOPS read and 44,510.5 IOPS write, which easily beat out its comparables. The disparity between the two SM951 models really showed during our server mixed-workloads (with a queue depth of ranging from 1 to 128), where the SM951-NVMe recorded speeds that were by far the fastest we’ve seen for a consumer drive, beating out all of the other drives by a significant margin. Things slowed down a bit once we put it through our real-world benchmarks, however, with the PCIe version actually having slightly better results in all of our workloads with the exception of latency during our gaming trace. Nevertheless, the numbers we measured from the NVMe drive during the real-world tests were still incredibly impressive.

Because Windows 8.1 has built-in NVMe support, getting the SM951 up and running was a seamless process even though Samsung doesn’t offer any specific driver support; we simply connected the drive and it was ready to test. However, things might be a bit more complicated when using previous versions of Windows operating systems. Overall, this drive certainly has a lot to offer and is undoubtedly one of the fastest M.2 drives the industry has to offer; however, this performance comes at a premium price. That being said, because there is a very limited selection of M.2 options on the SSD market (especially remarkably high-performing ones like the SM951-NVMe), a lot of power users will find this release very exciting, with StorageReview being among them.

The Samsung SM951-NVMe is a very powerful M.2 SSD that will be attractive to OEMs looking to build high-performance laptops and workstations.