The Seagate’s Enterprise Performance 10K HDDs are eighth generation of Seagate’s Enterprise Performance line. The drive is a 2.5” form factor, 10K SAS 12Gb/s HDD coupled with the “TurboBoost” of 32GB of eMLC flash for faster read and write performance as well as 128MB multisegmented cache. The drive comes with a maximum capacity of 1.8TB, 50% more capacity of the previous generation. For buyers with data security in mind, there is also a secure model available with instant secure erase. The drive also comes in capacities of 300GB, 450GB, 600GB, 900GB, and 1.2TB.

The Seagate’s Enterprise Performance 10K HDDs are eighth generation of Seagate’s Enterprise Performance line. The drive is a 2.5” form factor, 10K SAS 12Gb/s HDD coupled with the “TurboBoost” of 32GB of eMLC flash for faster read and write performance as well as 128MB multisegmented cache. The drive comes with a maximum capacity of 1.8TB, 50% more capacity of the previous generation. For buyers with data security in mind, there is also a secure model available with instant secure erase. The drive also comes in capacities of 300GB, 450GB, 600GB, 900GB, and 1.2TB. 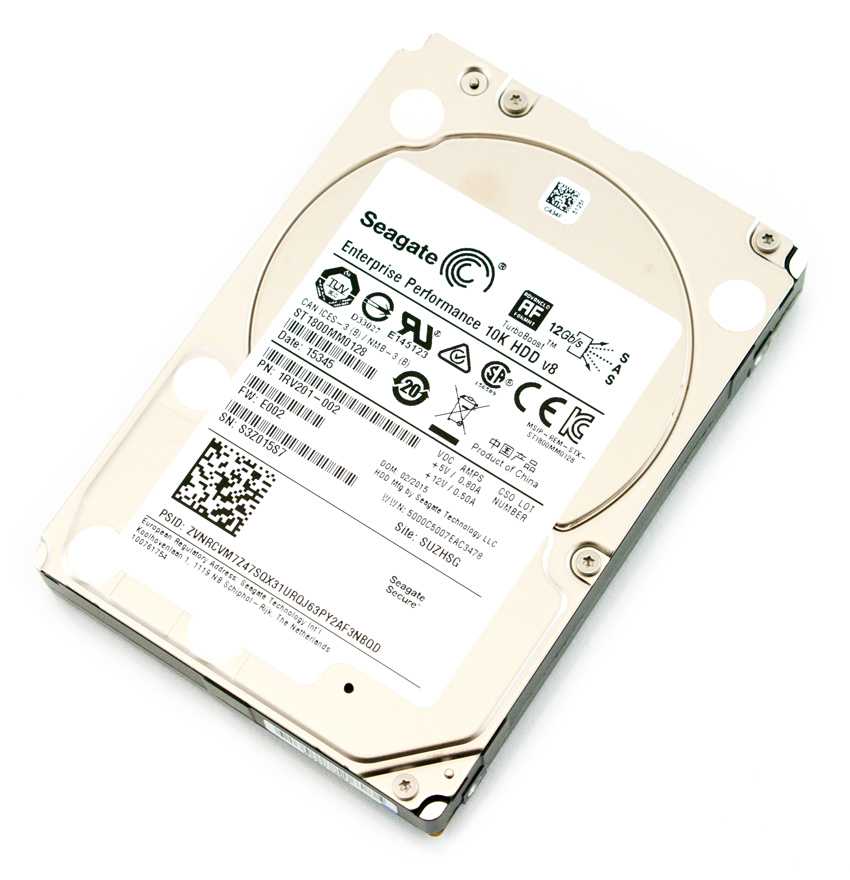 The Seagate Enterprise Performance 10Kv8 with TurboBoost comes with a 5-year warranty and has a street price of $735.

The Seagate Enterprise Performance 10k HDD with TurboBoost is a 2.5" form factor drive with a height of 15mm. The drive's design continues in the footsteps of its predecessors offering a near-identical appearance to the Seagate SSHD. The top features the product information label with the related specs such as capacity and interface. The sides of the drive provide four screw holes for simple mounting. The bottom of the drive is mostly black with the circuit board exposed. 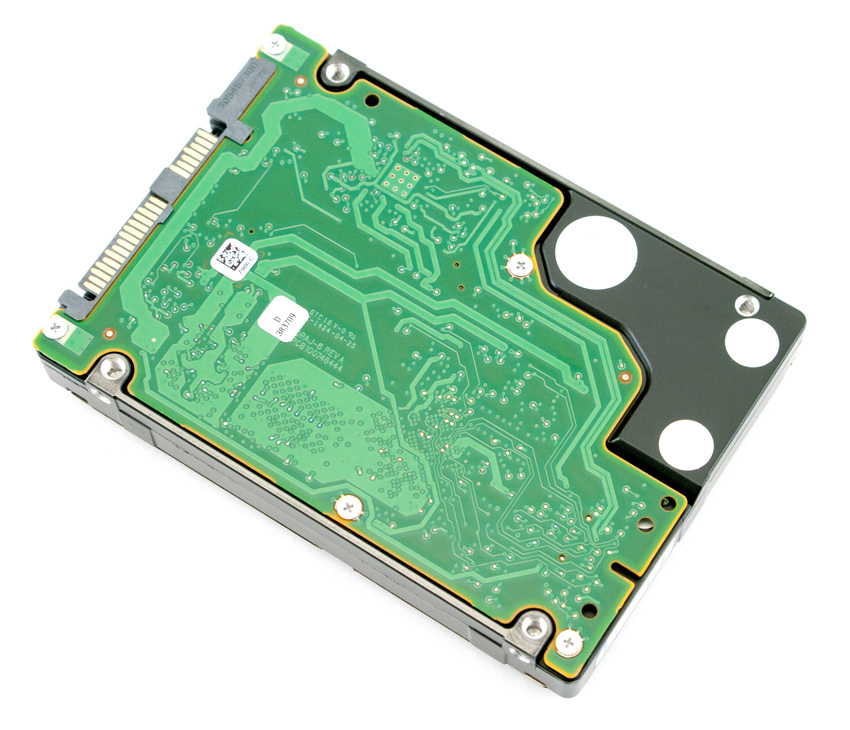 The front of the drive features a traditional SAS interface. 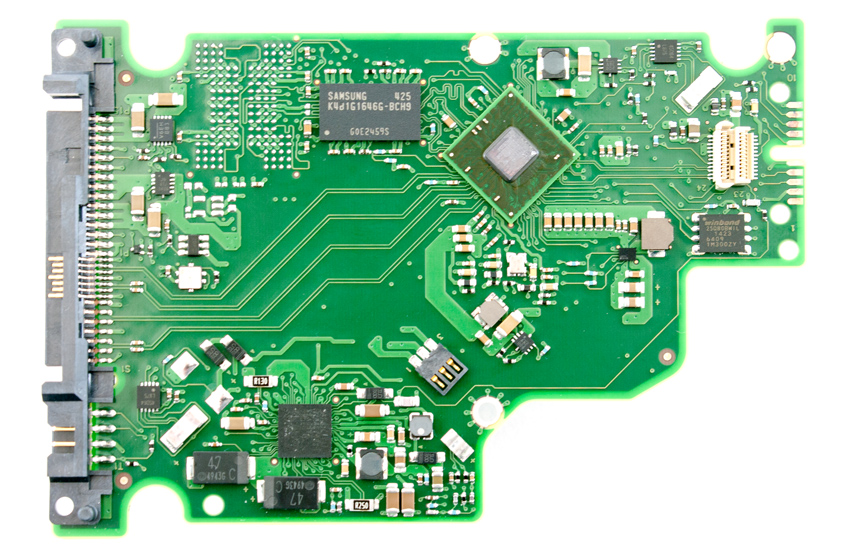 Inside the Seagate 10k with TurboBoost, the primary controller is a Avago-chipset with a Samsung DRAM package visible.

We will be comparing the Enterprise Performance 10k8 with the following drives for this review:

We are testing the drives on the Dot Hill AssuredSAN 4824.

In the enterprise market, there is a huge difference between how products claim to perform on paper and how they perform in a live production environment. We understand the importance of evaluating storage as a component of larger systems, most importantly how responsive storage is when interacting with key enterprise applications. To this end, we've rolled out application tests including our proprietary MySQL performance via SysBench, SQL Server performance via Benchmark Factory as well as VMmark virtualization performance by VMware.

The Percona MySQL database test via SysBench application test measures the performance of OLTP activity. In this testing configuration, we use a group of Lenovo ThinkServer RD630s and load a database environment onto a single SATA, SAS or PCIe drive or a group of HDDs using an LSI 9286-8e RAID card. This test measures average TPS (Transactions Per Second), average latency, as well as average 99th percentile latency over a range of 2 to 32 threads. Percona and MariaDB are using the Fusion-io flash-aware application APIs in the most recent releases of their databases, although for the purposes of this comparison we test each device in their "legacy" block-storage modes. 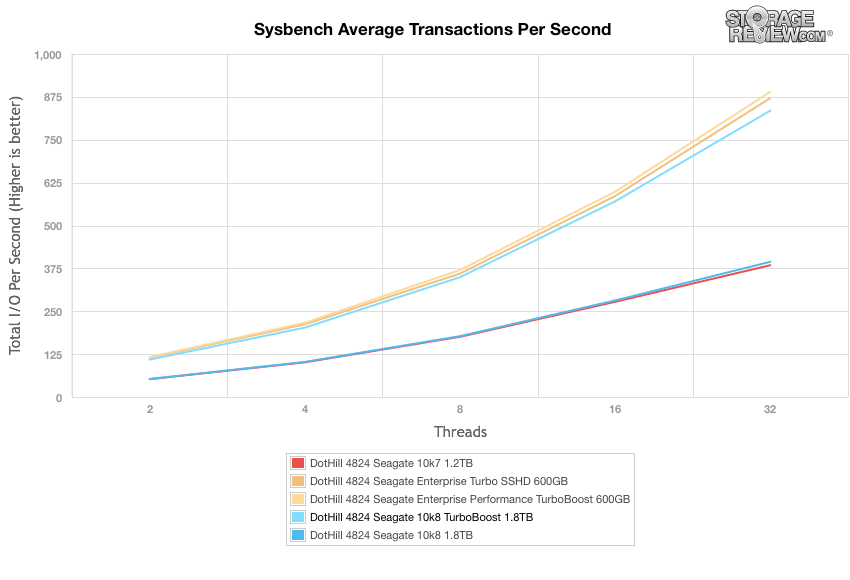 Moving on to average latency in our Sysbench MySQL test showed similar results. The 10Kv8 again landed in the middle of the pack this time fast on the heels of the 15K and hybrid. 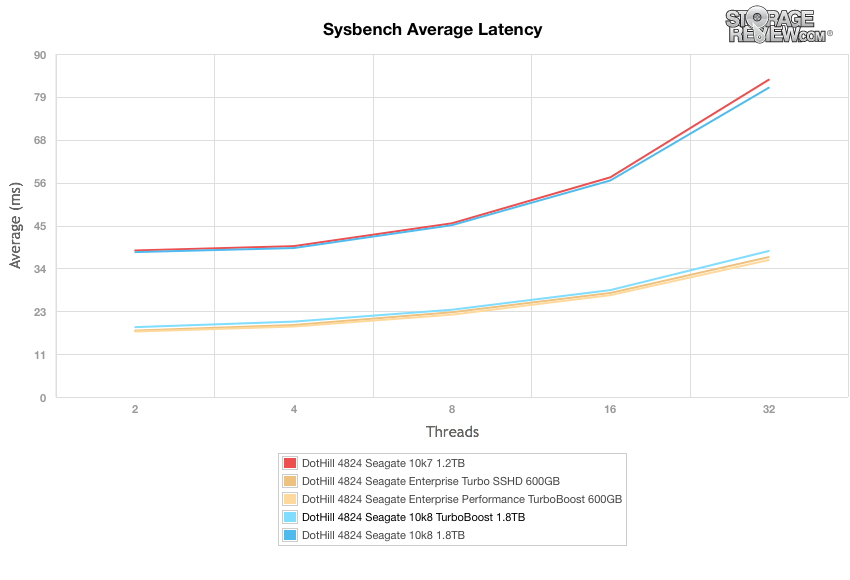 In terms of our worst-case MySQL latency scenario (99th percentile latency), the 10Kv8 with turbo maintained its spot in the middle falling a little farther behind the SSHD and the 15K 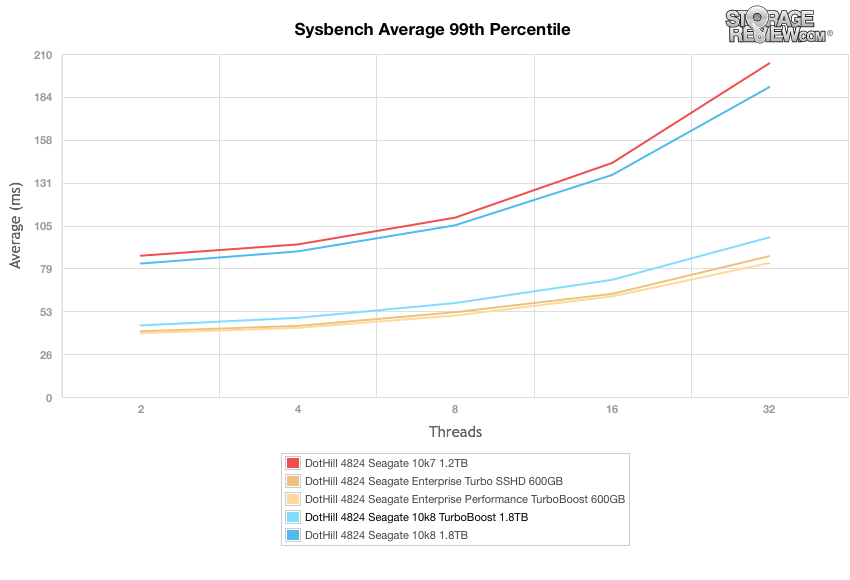 As with the Sysbench test, the results were very similar as far as placement in performance. The 10Kv8 with turbo landed in the middle again falling behind both the 15K with turbo and the hybrid drive. With 30k virtual users the 10Kv8 with turbo had 4,460.6 TPS.

Moving to a smaller database size the results overall are much closer, all within 20TPS of each other. The 10Kv8 with turbo landed in the middle with 3,093.9 TPS.

The latency was also close, within 35ms of each other, and, once again, the 10Kv8 with turbo placed in the middle with 106ms.

Comparing the normalized VMmark 2.5.1 performance, the 10Kv8 with turbo was able to extend up to a load of 8-tiles, falling in second behind the 15K that made it to a load of 10-tiles. 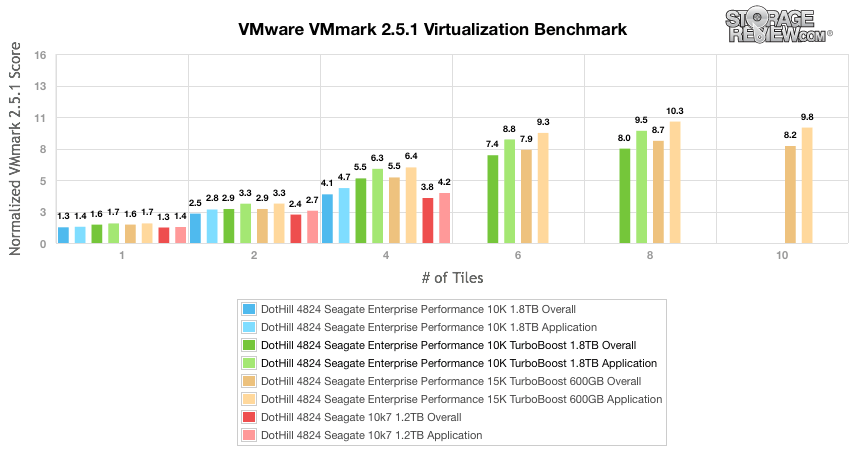 Prior to initiating each of the fio synthetic benchmarks, our lab preconditions the device into steady-state under a heavy load of 16 threads with an outstanding queue of 16 per thread. Then the storage is tested in set intervals with multiple thread/queue depth profiles to show performance under light and heavy usage. Preconditioning and Primary Steady-State Tests:

With max latency wee see similar results to the above. The 10Kv8 with turbo came in last with a read speed of 1,325.8ms and third in write with a speed of 385.6ms.

Interestingly, standard deviation gave us the exact same results as average latency with the same placement.

Compared to the fixed 16 thread, 16 queue max workload we performed in the 100% 4k write test, our mixed workload profiles scale the performance across a wide range of thread/queue combinations. In these tests, we span workload intensity from 2 threads and 2 queue up to 16 threads and 16 queue. In throughput, the 10Kv8 with turbo took the third spot once again peaking in performance at 8,909 IOPS. 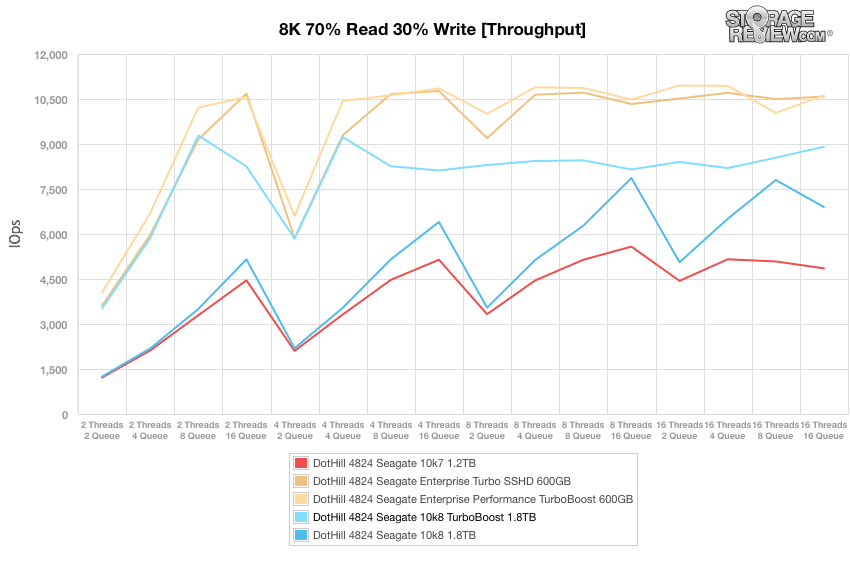 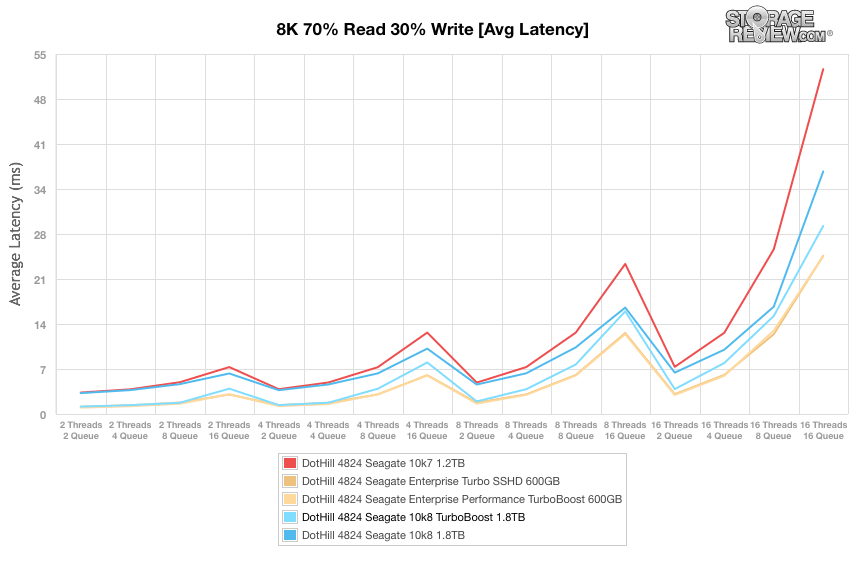 With max latency, the 10Kv8 with turbo falls to the bottom of the pack once more. Its non-turbo counterpart however took the top spot. Most of the drives post inconsistent speeds throughout. 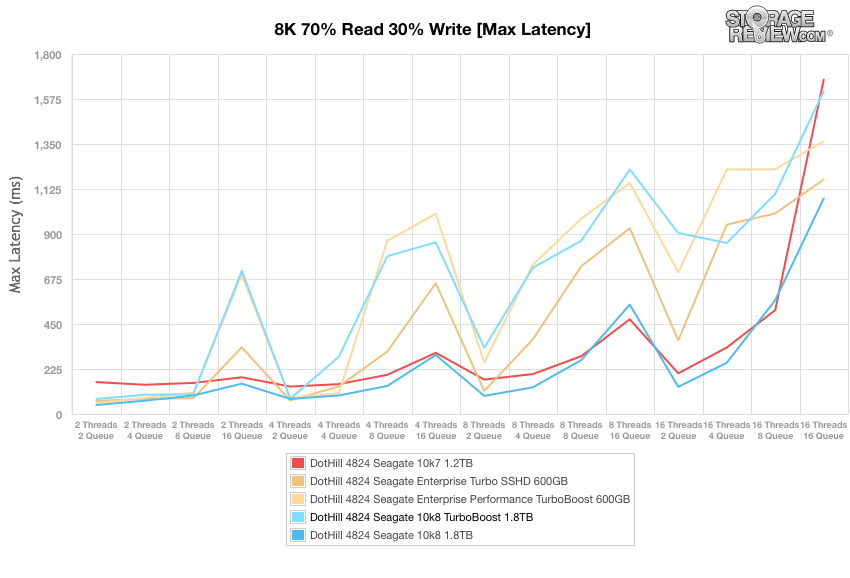 Standard deviation showed the 10Kv8 with turbo stay at the bottom of the pack for the most part with its non-turbo counterpart once again being the top performer. 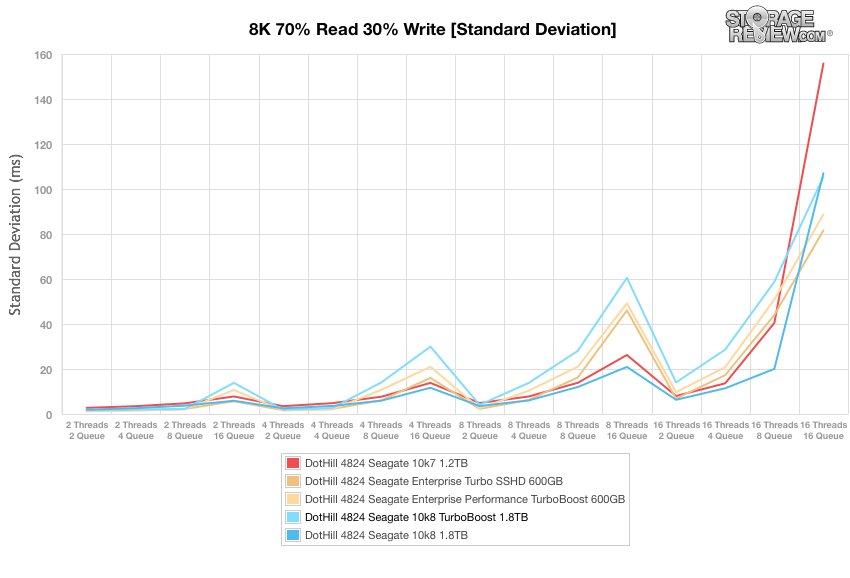 Our Enterprise Synthetic Workload 128K test is a large block sequential test that shows the highest sequential transfer speed for a platter drive. When looking at 128K performance of 100% write and 100% read activity, the 10Kv8 with turbo landed in second place in read speed, 2.48GB/s, and third in write speed, 1.63GB/s. Unsurprisingly, the 15K with turbo boost took the top read spot with 3.15GB/s. And the non-turbo 10Kv8 landing in first place with write speeds of 2.46GB/s.

The Seagate Enterprise Performance 10Kv8 HDD is a 2.5” 10K HDD with a “future-proof” 12Gb/s SAS interface. The drive comes with Seagate’s TurboBoost, which adds 32GB of eMLC NAND as well as a 128MB cache to increase performance. The drives are designed to be used in data centers storing mission critical data. The main focus of the drives is performance, capacity, density, and low energy consumption. The drives come in 300GB, 450GB, 600GB, 900GB, 1.2TB, and 1.8TB capacities and have a five-year warranty.

Looking at performance, The Seagate Enterprise Performance 10Kv8 with TurboBoost ran about in the middle most of the time, and fell to the bottom of the pack a few times. In our application tests it landed in the middle in both the Sysbench and SQL tests. On the smaller database sized SQL Server test the 10Kv8 with TurboBoost was within 8 TPS and 13ms of the top performer. It also loaded up to 8-tiles in our VMmark test where most of the other drives topped out at 4-tiles.

In our synthetic workloads the 10Kv8 with turbo still found itself in the middle of the pack in throughput tests but fell to the bottom of the pack with latency tests. In our 4K tests the 10Kv8 with turbo had throughput of 17,111 IOPS read and 7,565 IOPS write. It’s latency numbers were a bit on the high side with an average read latency of 63.66ms and write latency of 34.52ms. Max latencies showed a similar result with the read being very high, 1,325.8ms, and the write being more in line with the other drives tested 385.6ms. With our 8K the 10Kv8 with turbo’s performance was better coming in second in read, 143,516 IOPS, and third in write with 55,236 IOPS. And in our large block sequential test showed us speeds of 2.48GB/s read and 1.63GB/s write.

It’s not surprising that the 10Kv8 with turbo didn’t compete well against the 15K with turbo. However the 10Kv8 with turbo does have a higher throughput than its non-turbo counterpart and it also has three times the capacity of the 15K drives. While the drives would have a bit lower throughput and lower latency than the 15K drives, they would be able to pack quite a bit more capacity in the same rack space giving a lower cost/GB.

The Seagate Enterprise Performance 10Kv8 with TurboBoost offers a nice mix of performance and capacity in an energy saving 2.5” form factor.