Up until now, if a drive had 1TB or more of capacity it was automatically assumed to be a desktop drive. Not anymore – the Samsung MT2 1TB is a 2.5-inch, 12.5mm height hard drive for use in external enclosures and notebook computers. Check out our review to see the upsides and downsides of this particular drive.

By Charles Jefferies
Up until now, if a drive had 1TB or more of capacity it was automatically assumed to be a desktop drive. Not anymore – the Samsung MT2 1TB is a 2.5-inch, 12.5mm height hard drive for use in external enclosures and notebook computers. Check out our review to see the upsides and downsides of this particular drive..
While the MT2 is a 2.5-inch hard drive, keep in mind that it has a height of 12.5mm; this means it is not going to fit into all notebook computers and external enclosures. The hard drive bay in a typical notebook computer is designed to handle a drive with a 9.5mm height; there may not be enough room for a 12.5mm height drive. The highest capacity available in a 2.5-inch, 9.5mm height drive is 750GB; one example is the Seagate Momentus 750GB. 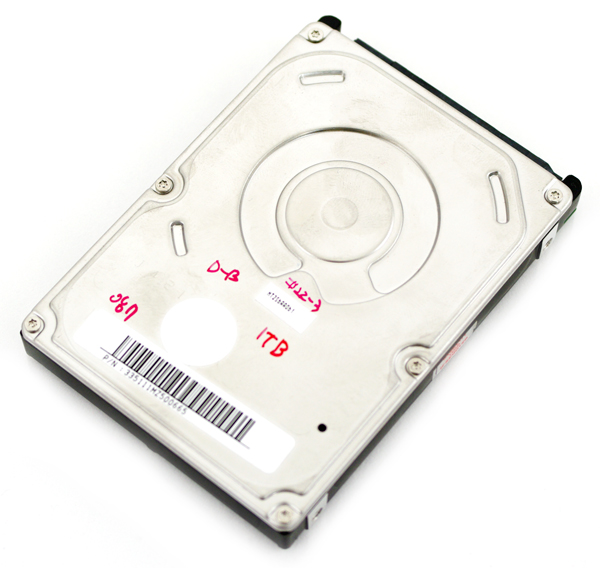 There is a reason for the extra height, of course – the MT2 is a three-platter design as opposed to the standard two- or one-platter setup for 9.5mm drives. It has to have three platters to end up with a capacity of 1TB; each platter holds 333GB of data and change. 333GB per platter is an extremely high platter density, especially considering this is a 2.5” drive. Although the MT2 only has a 5400RPM rotational speed, its high platter density may make up for some of the lost performance. Let’s get down to testing this drive, but first, a look at the specs and the physical attributes.
Samsung Spinpoint MT2 1TB (HM100UI) Specifications
Aesthetics
The first thing you might notice about our Samsung Spinpoint MT2 is the lack of model sticker. What it lacks in adhesive labels though, it more than makes up for in permanent marker writing. Obviously shipping versions of this drive include the proper branding, this was just an early production version. 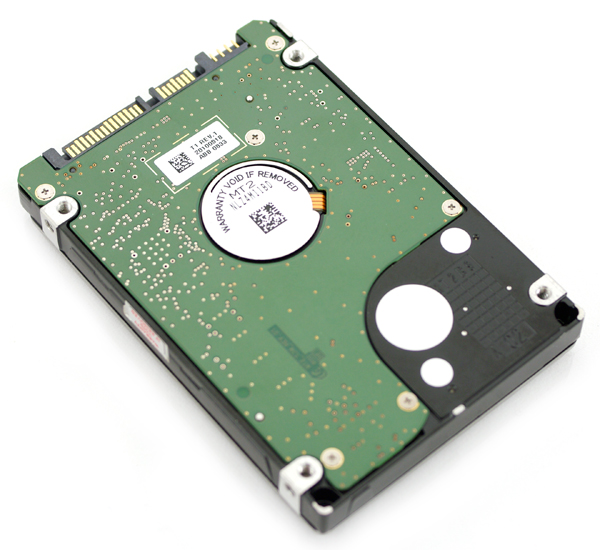 The bottom of the Spinpoint MT2 is very clean and nearly flush across the bottom. There is very little unused space on this drive, with as much vertical space taken up by the drive body and circuit board as possible. This allows for a larger inside cavity for the three platters packed densely inside.

Looking at the side profile of the drive you can kind of tell the drive sits taller than most others. At 12.5mm, its 3mm thicker than the common industry standard 9.5mm 2.5-inch drive.

The front of the MT2 is pretty basic, including the standard SATA power and data connection, as well as 4 pins for changing service modes or activating special modes.
Disassembly
The Samsung Spinpoint MT2 is easy to take apart after removing six Phillips head screws. With the screws removed, the circuit board easily lifts off the body, exposing a thin insulating sheet separating the board from the metal body of the drive. As you might have noticed, Samsung designed the PCB to have all electronic components facing in at the drive itself. 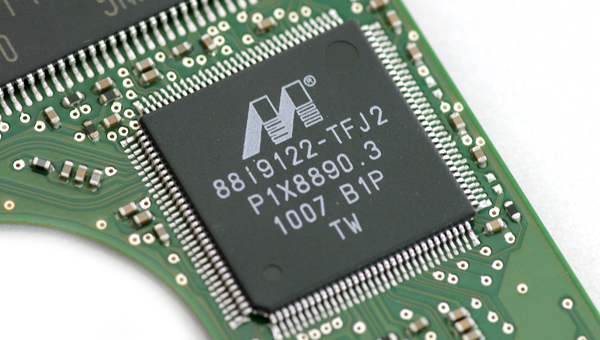 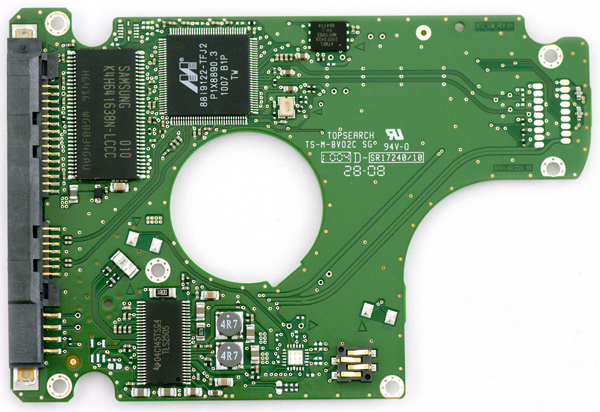 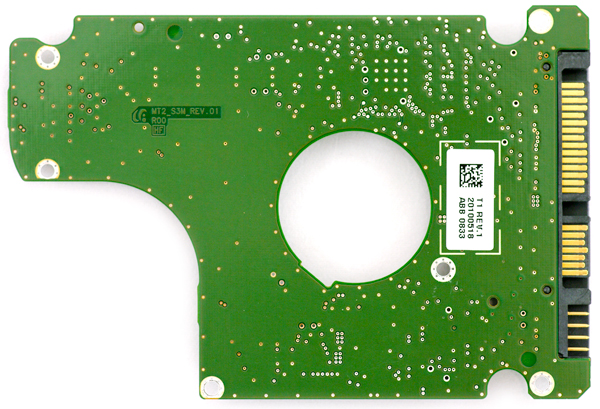 Synthetic Benchmarks
Our synthetic benchmarks consist of CrystalDiskMark and IOMeter. CrystalDiskMark gives an idea of the drive’s absolute performance whereas IOMeter puts the drive through different usage scenarios and is better at predicting how the drive will perform in the real world. For the review of the Samsung Spinpoint MT2 we decided to put it head to head with some of the latest higher capacity 7200RPM offerings to see how performance compares. One of the main reasons we made this choice was for the fact that many high-capacity 2.5" 7200RPM drives are on the market now, with customers cross-shopping between rotation speeds now that there is very little price or power impact between speeds. 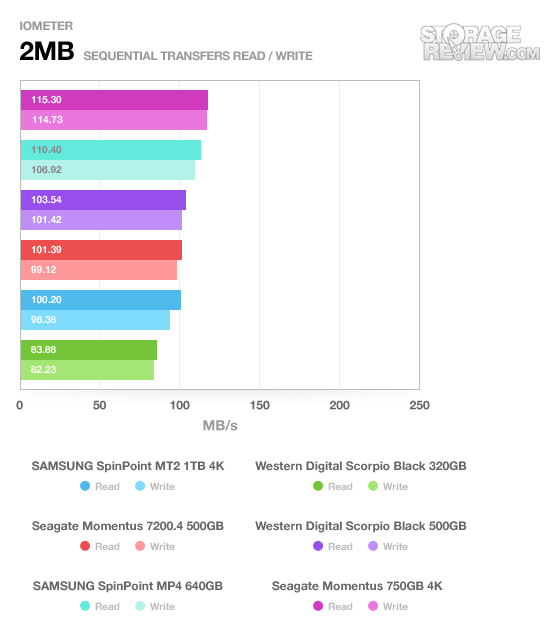 We’ve put the MT2 up against formidable competitors, all of which have a 7200RPM rotational speed that automatically gives them an advantage in any performance situation. Sequential data transfer is where a high platter density typically pays off; the Seagate Momentus 750GB (375GB/platter) and Samsung Spinpoint MP4 (320GB/platter) lead the pack. The MT2 and its 333GB/platter density is not enough to overcome the Seagate Momentus 7200.4 500GB and Western Digital Scorpio Black 500GB and their 250GB/platter densities; all fingers point at the fact that the MT2 is 5400RPM. 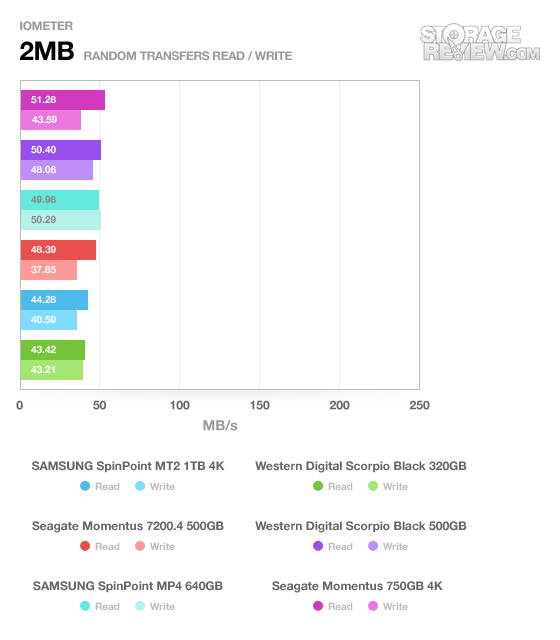 This test sees most drives keep their respective places, which is not a good thing for the MT2 since it is at the bottom of the heap. The MT2 lags behind the performance-leading Seagate Momentus 750GB by about 14% in reads and 7% in writes, so the difference is not huge. 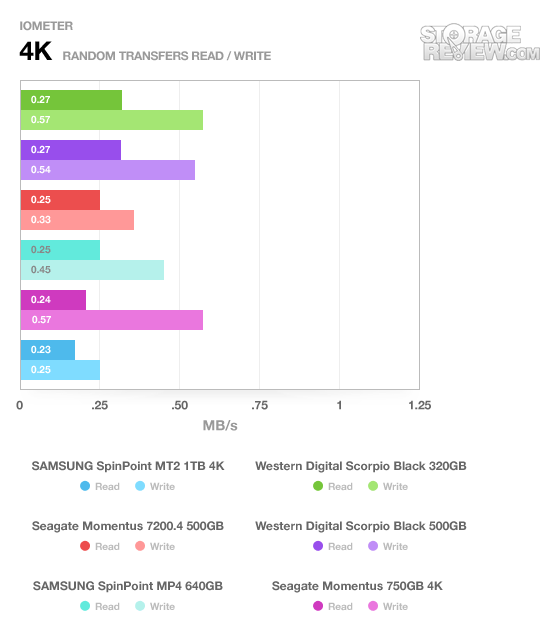 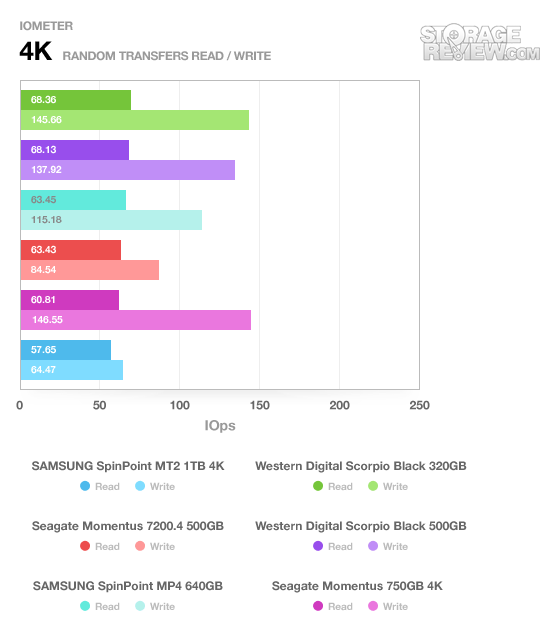 The 4K random transfer test provides a better look at the responsiveness of the drive in everyday usage since it deals with accessing smaller randomly-assorted files. The MT2 finishes last; its 5400RPM rotational speed simply isn’t allowing it to do better. 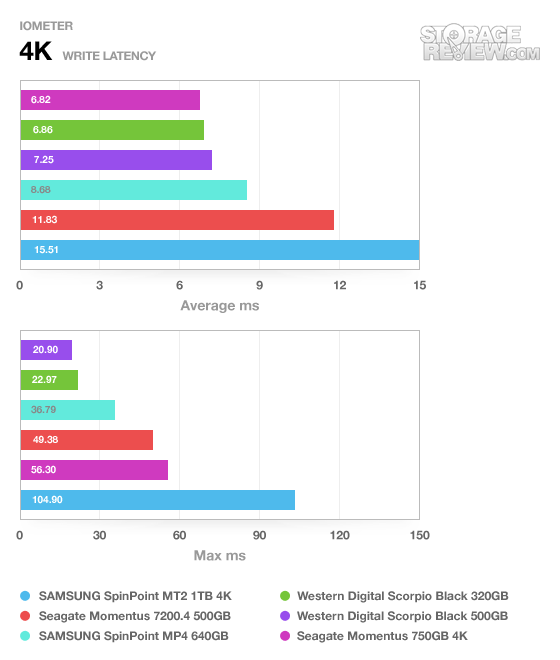 Write latency is another good indicator of everyday responsiveness. This is the MT2’s worst showing yet; its high latency is the reason we had to make the chart so wide. The MT2’s average latency of 15.51ms is a whopping 2.27x higher than the top performing drive, the Seagate Momentus 750GB. Ouch! 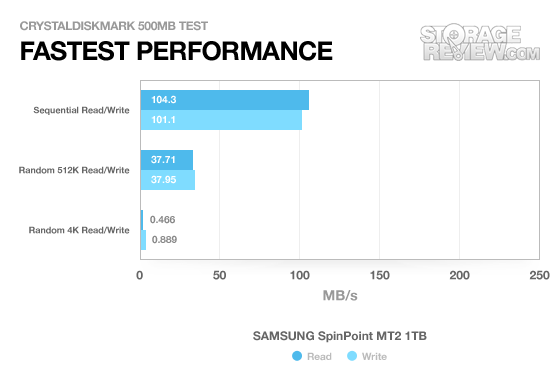 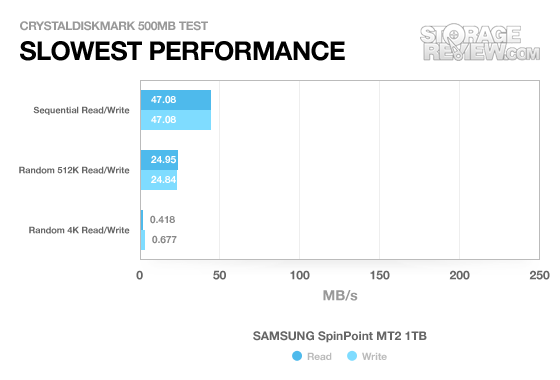 The CrystalDiskMark numbers are in line with what we expected to see for the MT2, provided its previous benchmark numbers. Not terrible, but definitely not remarkable.
This next set of IOMeter benchmarks tests the drive in a server-style workload where there are multiple requests for data at the same time. These tests take full advantage of the drive’s Native Command Queuing (NCQ) capabilities. 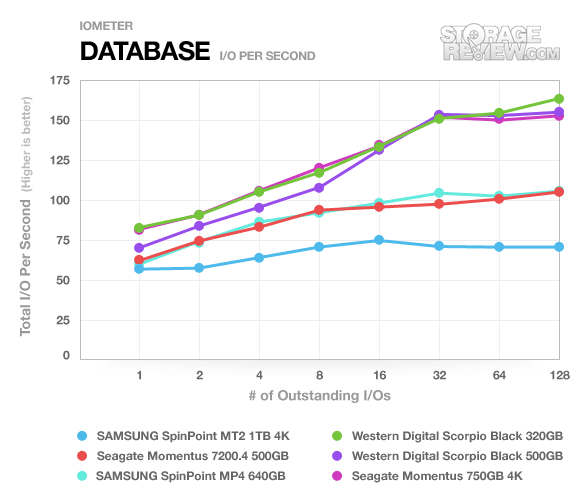 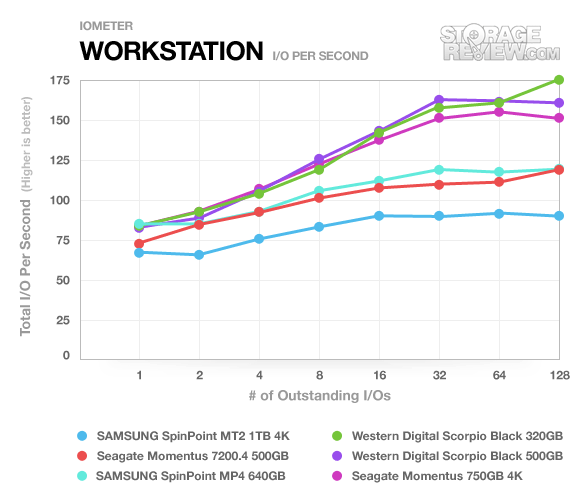 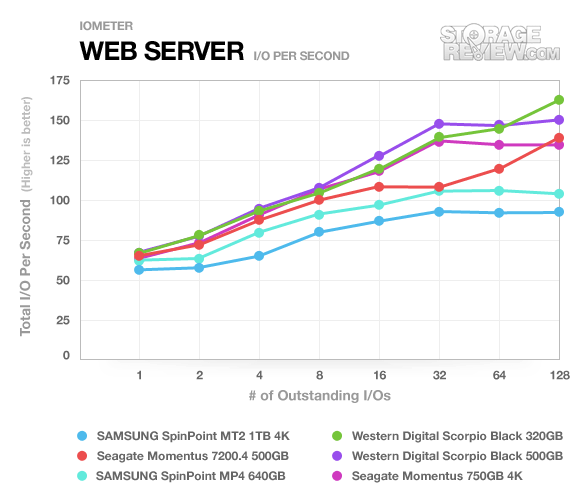 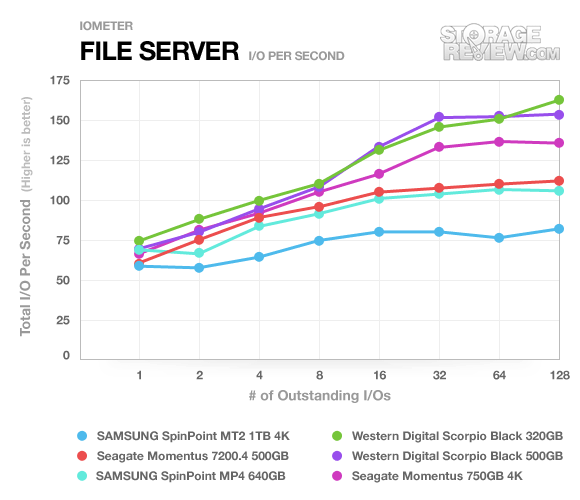 The MT2’s graphs generally follow the curves of the other drives. Needless to say its performance is below all of the other drives with no exceptions; it is unable to beat even the age-old Seagate Momentus 7200.4, which is not one of the better-performing 7200RPM drives.
Real-World Benchmarks
The synthetic benchmarks are just that – synthetic. Our custom StorageMark 2010 benchmarks run actual programs and scripts to most realistically simulate real-world usage scenarios. First on the list is our HTPC disk capture benchmark.
In this test we include: playing one 720P HD movie in Media Player Classic, one 480P SD movie playing in VLC, three movies downloading simultaneously through iTunes, and one 1080i HDTV stream being recorded through Windows Media Center over a 15 minute period. Higher IOps and MB/s rates with lower latency times are preferred. In this trace we recorded 2,986MB being written to the drive and 1,924MB being read. 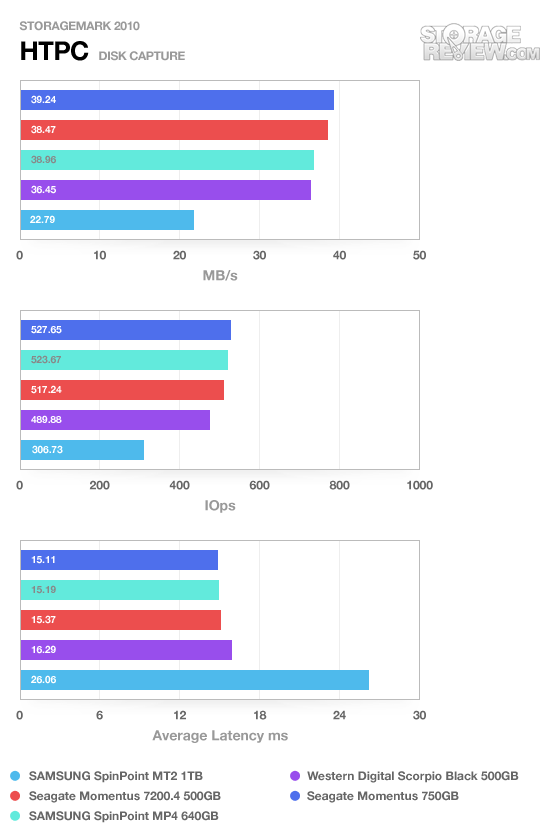 This first real-world benchmark is focused on the write performance of the drive. Clearly it prefers drives with 7200RPM rotational speeds; the 7200RPM drives prevail regardless of all other factors, including platter density. It’s hard to deny at this point that the MT2 is a slow drive compared to the mainstream high-performance 7200RPM notebook drives.
Our next real-life test covers disk activity in a gaming environment. Unlike the HTPC trace, this one relies heavily on the read performance of a drive. To give a simple breakdown of read/write percentages, the HTPC test is 64% write, 36% read, the Productivity test is 59% write and 41% read, while the gaming trace is 6% write and 94% read. The test consists of a Windows 7 Ultimate 64-bit system pre-configured with Steam, with Grand Theft Auto 4, Left 4 Dead 2, and Mass Effect 2 already downloaded and installed. The trace captures the heavy read activity of each game loading from the start, as well as textures as the game progresses. In this trace we recorded 426MB being written to the drive and 7,235MB being read. 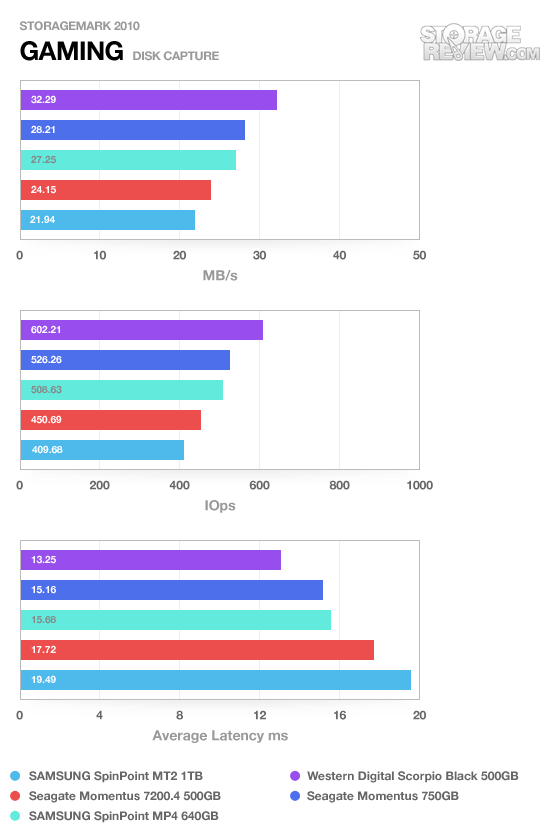 This second test is almost exclusively focused on the read performance of the drive. The MT2 is only two-thirds as fast as the performance leading Western Digital Scorpio Black 500GB in both transfer speed and latency. Translated, this means you will be waiting noticeable longer for the drive to load levels in games and so on.
Power Consumption 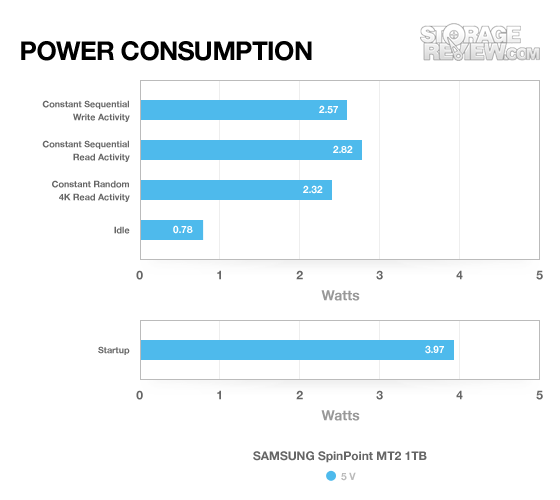 The MT2 does surprisingly well in the power consumption arena, posting numbers under those of typical 2.5-inch 7200RPM drives despite the fact that it has three platters. For once, the MT2’s 5400RPM rotational speed is a benefit. The Seagate Momentus 750GB, which constantly bested the MT2 in the performance benchmarks, consumes about 30% more power in constant sequential write activity and 10% more at idle. These numbers won’t make or break your notebook’s battery life, but the fact remains that your battery life will be better with the MT2.
Warranty
The MT2 has a three-year warranty as do most notebook hard drives from Hitachi, Samsung, and other manufacturers. Only Western Digital offers a longer warranty period to the tune of five years with its Scorpio Black series drives.
Conclusion
The Samsung Spinpoint MT2’s saving grace is its large storage capacity – 1TB is the highest available in a 2.5-inch form factor. Otherwise, this three-platter 5400RPM drive simply can’t post competitive performance numbers compared to the resident 7200RPM notebook drives, which are only modestly more expensive. Something else to consider with the MT2 is its 12.5mm height; it will not fit in all notebook computers and external enclosures. Feel free to ask us in the forums if you’re not sure if this drive will fit in your machine.
Overall the MT2 is something of an anomaly in the 2.5-inch notebook hard drive market; its best use is probably as a secondary storage drive in an external enclosure or second hard drive bay. For that we can recommend it, but as a primary drive it will not make for the most responsive system. Those looking for a primary drive will be better off with one of the speedier 7200RM drives.
Pros:
Cons:
Bottom Line
The MT2 has lots of space but its unremarkable performance best suits it as a secondary storage drive. Its large physical height also means that it has a very narrow range of devices it is compatible with. If you need the most storage possible in your notebook however, it’s hard to beat the 1TB 2.5" capacity/size combo the Spinpoint MT2 offers.
Product Page
Discuss This Review
0 comment
0
FacebookTwitterPinterestEmail