When we completed our review of the Samsung SSD 830 in September, we praised the SSD for being built entirely in-house, which includes key components like the NAND, processor, cache RAM and firmware. Being a home grown creation generally means to better host system compatibility and better/faster support when issues arise. But SSDs need to perform as well, and the SSD 830 definitely had some bright spots, like posting the best deep queue depth 4K reads of any 2.5″ SATA client SSD we’ve tested. The SSD 830 also delivered excellent write latency scores and very low idle power consumption. Even better than to combine two 256GB Samsung SSD 830’s to see what kind of scores the drives can post when configured for performance in RAID0.

When we completed our review of the Samsung SSD 830 in September, we praised the SSD for being built entirely in-house, which includes key components like the NAND, processor, cache RAM and firmware. Being a home grown creation generally means to better host system compatibility and better/faster support when issues arise. But SSDs need to perform as well, and the SSD 830 definitely had some bright spots, like posting the best deep queue depth 4K reads of any 2.5″ SATA client SSD we’ve tested. The SSD 830 also delivered excellent write latency scores and very low idle power consumption. Even better than to combine two 256GB Samsung SSD 830’s to see what kind of scores the drives can post when configured for performance in RAID0.

Nothing has fundamentally changed from the first time we saw the SSD 830, the firmware of both drives in this RAID review is the same as the original (CXM01B1Q). For more background on the drive, please consult the single drive Samsung SSD 830 review. This review will focus only on the benchmark results from two 256GB 830’s in RAID0. 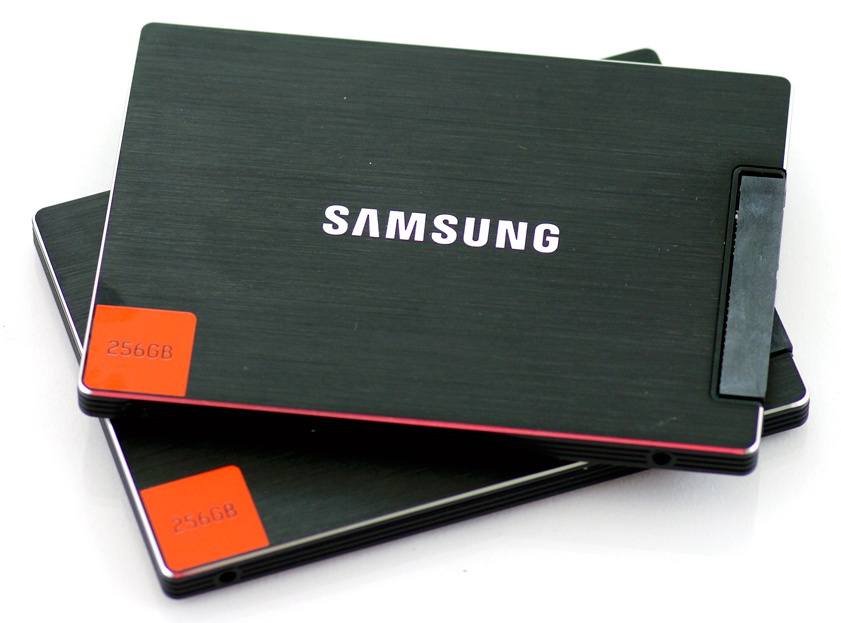 From our first review of the Samsung SSD 830, we knew we had a drive with very strong sequential read and write performance as well as very good 4K read speeds. Moving into a RAID0 setup we were curious how this would change. Our testing environment consisted of a Lenovo ThinkServer RD240 using a LSI MegaRAID 9260-8i for RAID. Our standard RAID settings include a 128K stripe size, write back enabled, read ahead, as well as drive cache enabled. 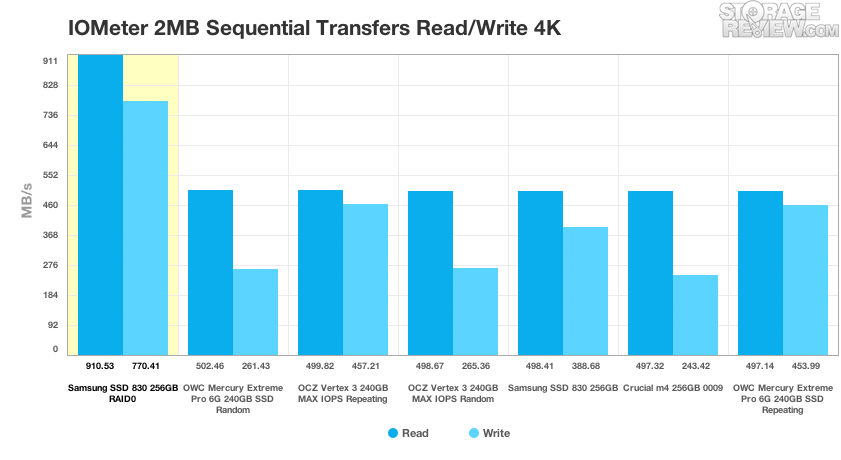 Next we look at random access speed with the same 2MB transfer size in IOMeter. 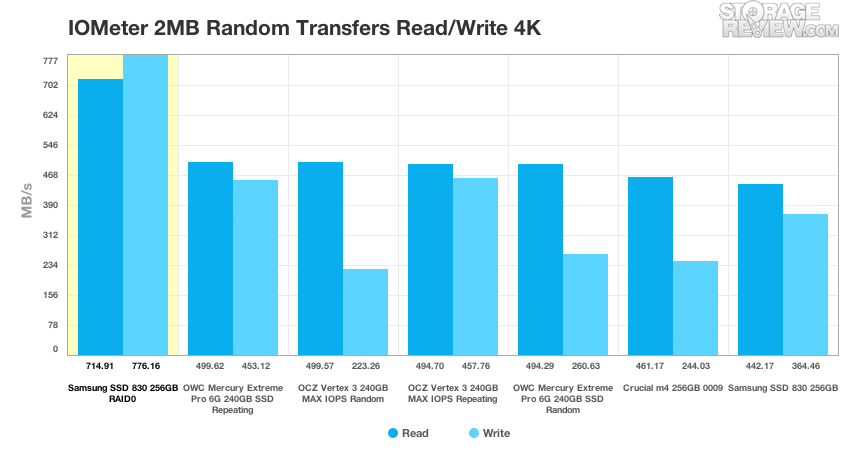 Our next group of tests switches to smaller 4K transfers, which are the bread and butter of flash storage. With no moving parts to slow them down, SSDs are able to blow hard drives out of the water in random access speeds. One should also note that in many RAID configurations, strip size can and will have an impact on performance. 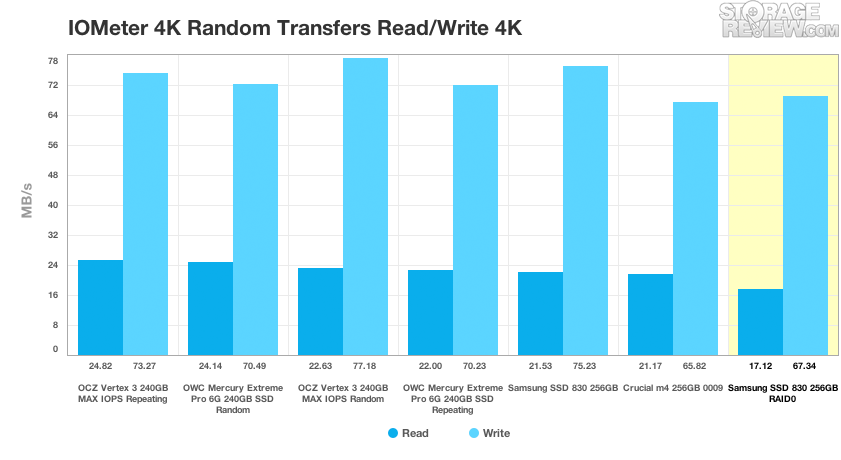 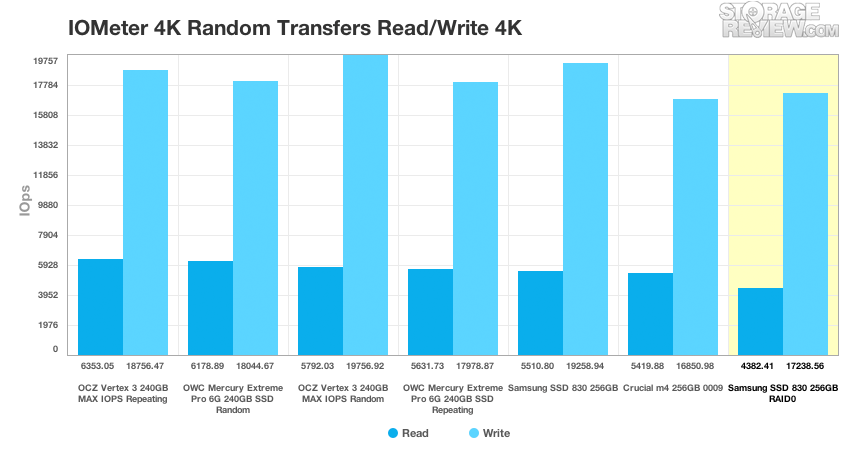 At a queue depth of 1 the Samsung SSD 830 in RAID0 slowed slightly compared to a single drive.

Looking at expanded queue depths, the SSD 830 was really able to stretch its legs in the 4K read test, topping out at nearly 100,000 IOPS read. 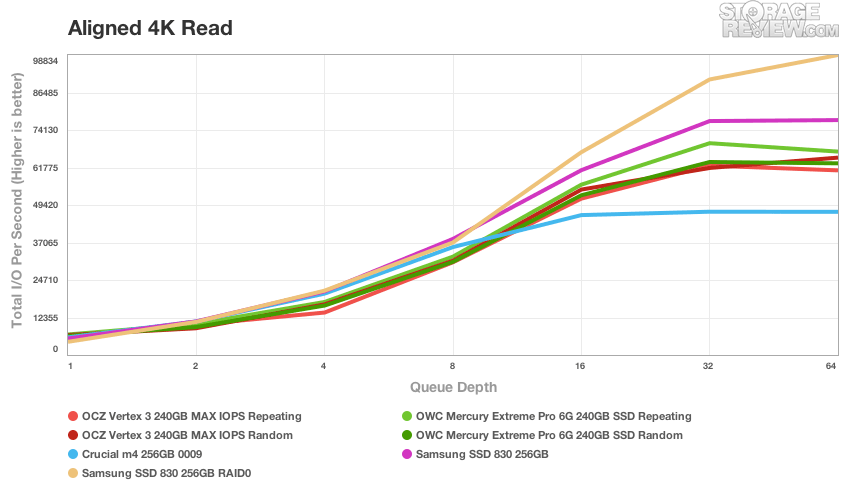 In the write test the performance stayed level, topping at roughly 27,600 IOPS. 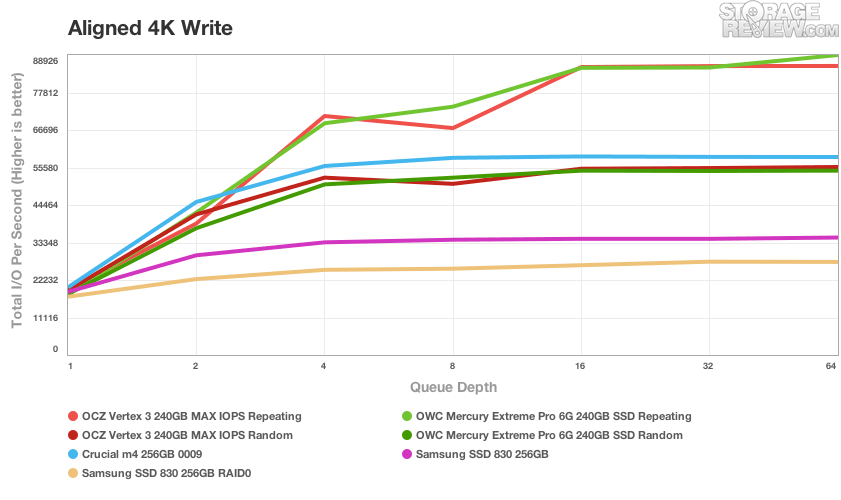 With its weaker 4K write RAID0 speeds, it wasn’t a huge surprise to see the drive rank slower in our latency test. Slow still has to be taken in context though, as it still beat out the single Crucial m4 and managed to stay under 0.06ms average. Peak latency was as great as it was with a single drive, measuring just 1.2ms… double that of the single drive and much, much faster than any other drive we compared it against. 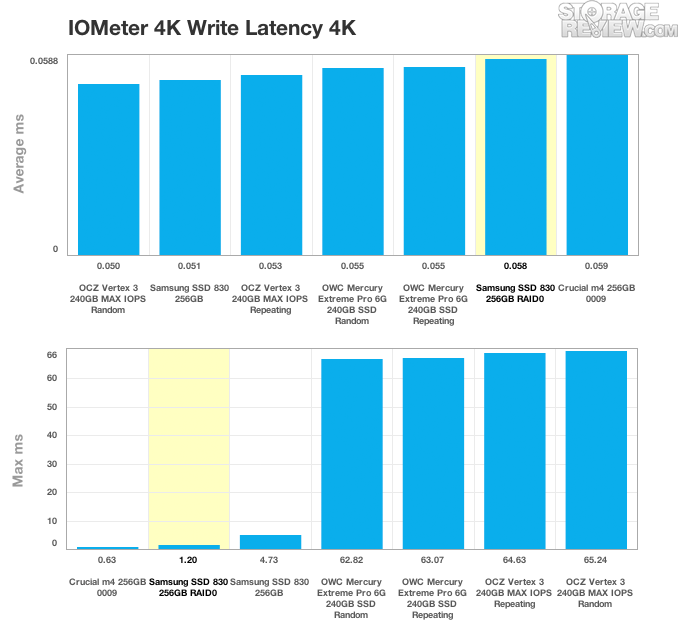 Using CrystalDiskMark we noted very good increases in performance across the board with large block transfers. 4K performance was still showing as weaker than a single drive, although we have noted similar findings in past RAID0 reviews. 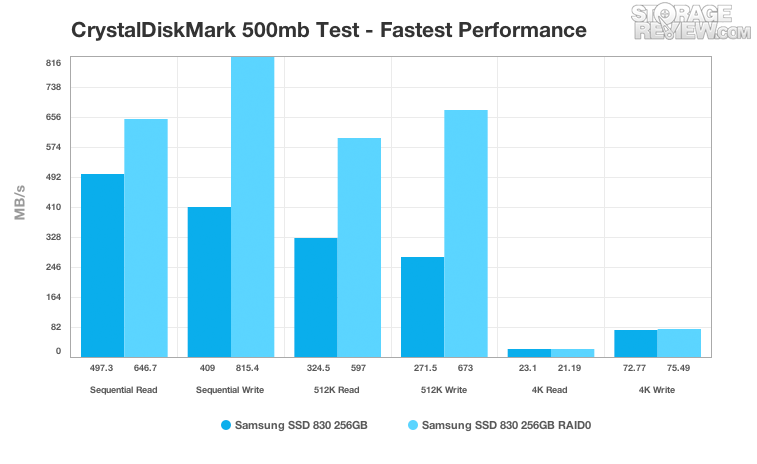 Our last section of synthetic benchmarks looks at the performance of the Samsung SSD 830 in a mixed workload environment. Across the board the RAID0 configuration either topped the charts or came close to it. Flexing its muscles with its great 4K read speeds the SSD 830 in RAID0 had no trouble blasting away from the other drives in our Webserver profile. 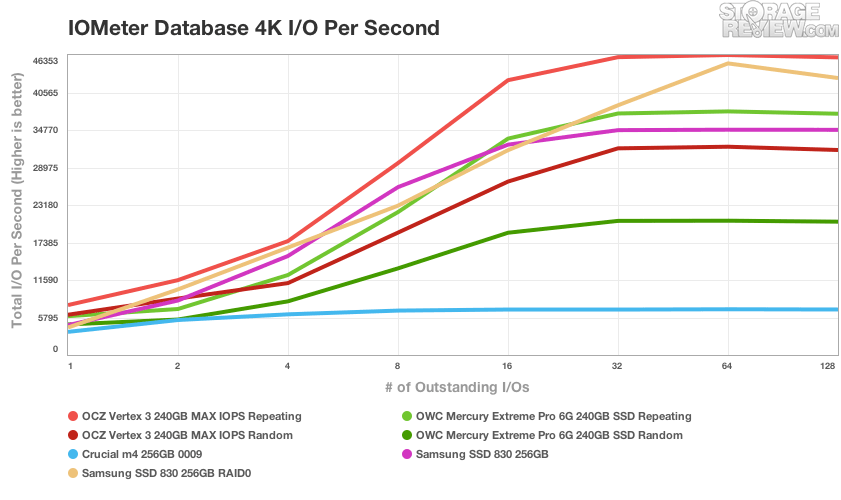 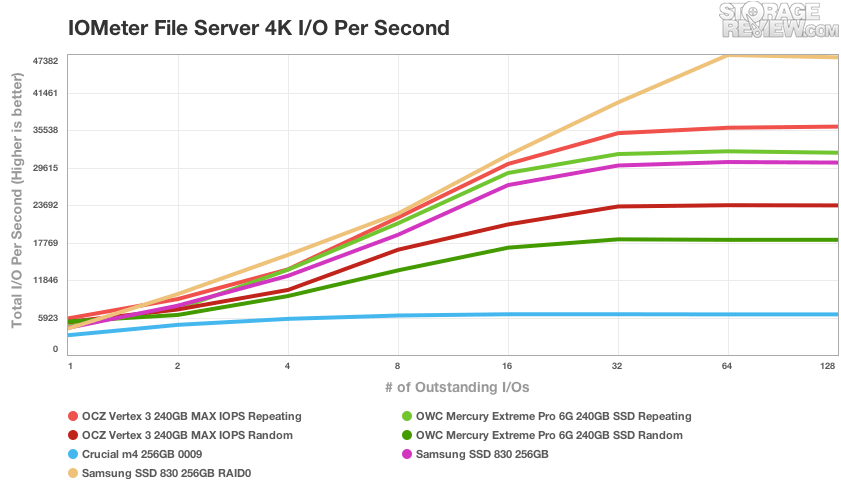 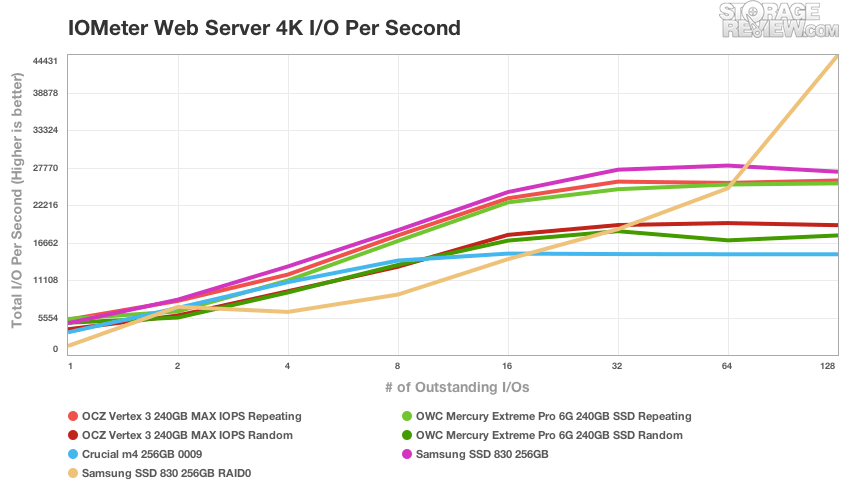 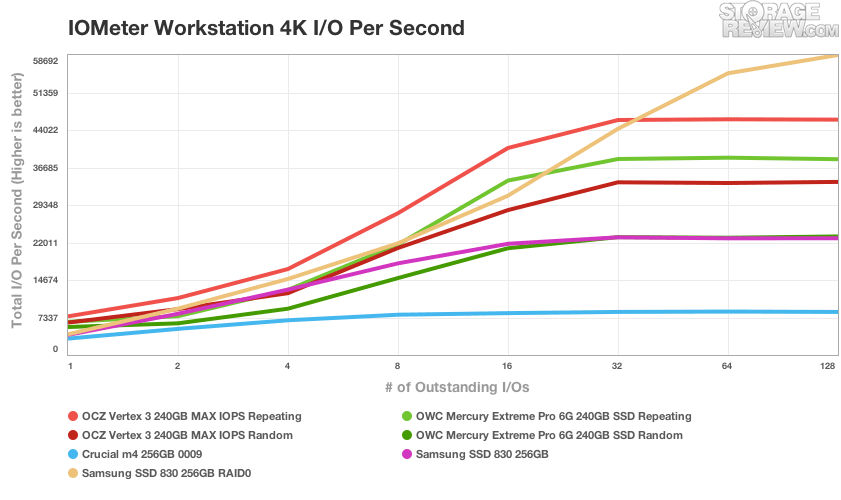 If you are new to StorageReview, one thing we try to focus on is how any given drive might perform under real-world conditions. For the average user, trying to translate high random 4K write speeds into an everyday situation is difficult. It also doesn’t make sense to assume that a drive with very high sequential speeds is going to perform great in the real-world if it can’t cope with mixed random activity. To really see how drives perform under normal work-loads you need to record the exact traffic being passed to and from the device, and then use that to compare drives against one another. For this reason we turned to our StorageMark 2010 traces which include HTPC, Productivity, and Gaming scenarios to help our readers find out how well a drive might perform under their conditions. 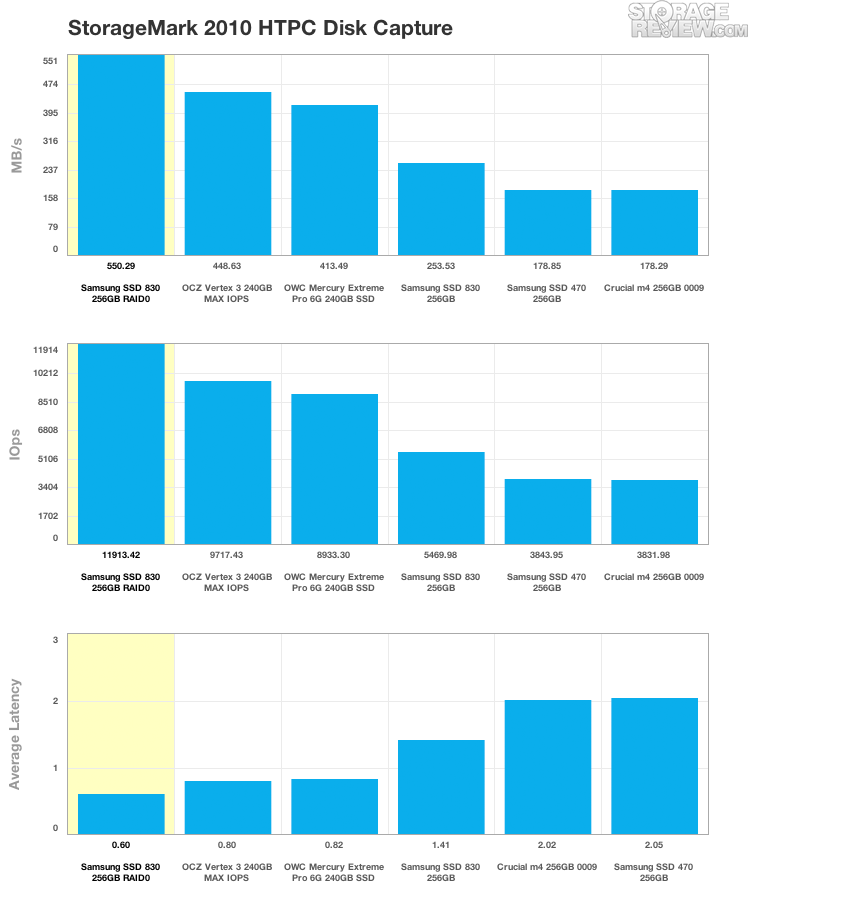 In our first trace covering an HTPC scenario, the Samsung SSD 830 more than doubled in performance. Originally it scored 253MB/s average, improving to 550MB/s average in RAID0. 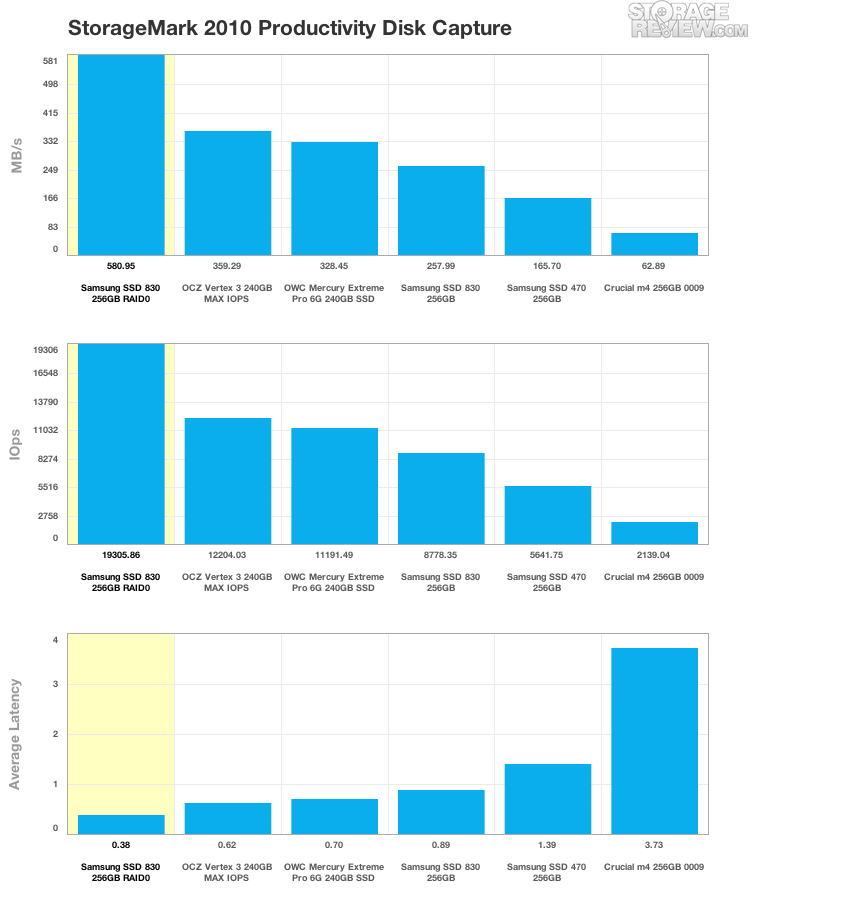 In a productivity scenario the SSD 830 again more than doubled in performance, improving from 258MB/s to 581MB/s in RAID0. 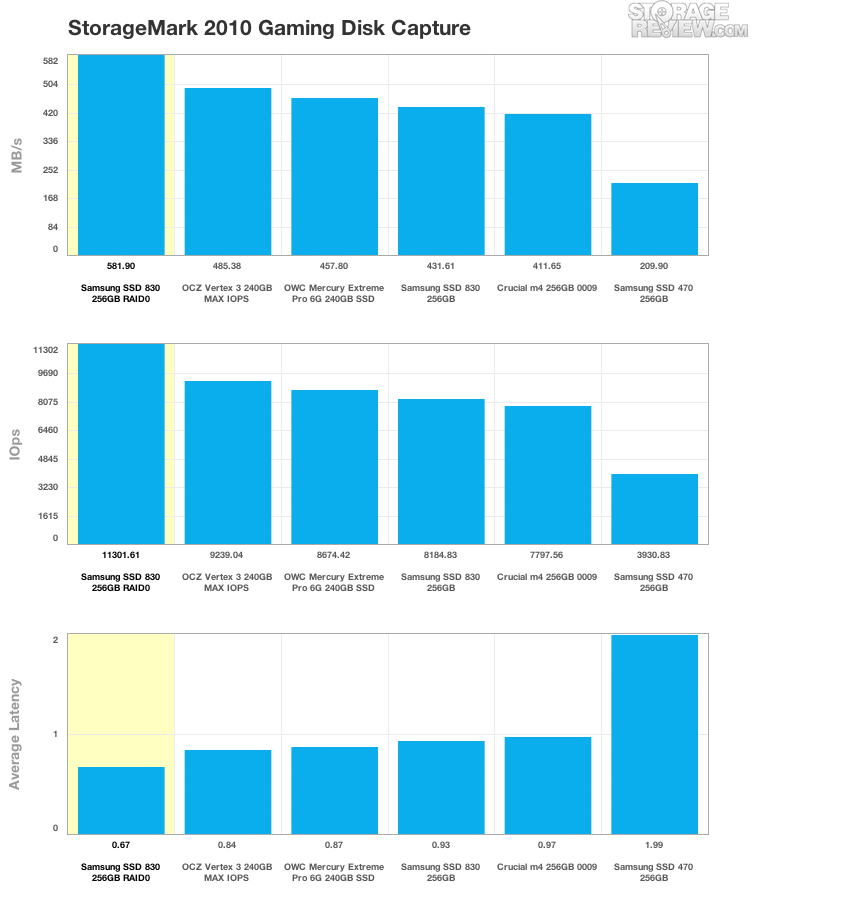 In the last trace covering gaming activity, the SSD 830 again improved very well in RAID0, although not doubling over the single drive. We measured 431MB/s average with a single SSD 830, which sped up to 581MB/s in RAID0.

There are a few places where the SSD 830 really stood out when in RAID0. Sequential read and write speed for example, skyrocketed to 910MB/s read and 770MB/s write in RAID0 with minimal impact from incompressible data. For video editing, that level of performance is hard to beat. We also saw big gains in other areas as well, the StorageReview productivity test saw a huge boost, improving from 258MB/s in single drive mode to 581MB/s in RAID0.

Unfortunately the gains weren’t almost double everywhere, with gaming performance improving but at a much more even pace. 4K write performance also didn’t improve as much as we had hoped, although some of that can be tweaked by RAID settings such as stripe size, depending on the projected workload.

Overall, the Samsung SSD 830 performed well in the RAID0 environment. For users looking to eek more performance out of their computer that already own this particular SSD, pairing it up with a second 830 in RAID0 does post good overall gains. It’s also worth considering RAID0 relative to capacity, as two 256GB SSDs for instance, are at times less expensive than a single 512GB SSD.

Samsung’s in-house design and reputation for reliability and compatibility continue to make it a great option in both single drive and RAID configurations.