The Samsung 845DC PRO is an enterprise-grade SSD designed to deliver high performance, especially in random write, and consistent low latency over the life of the SSD. The 845DC PRO has adopted the world’s first 24-layer 3D V-NAND technology for its storage, giving it up to 10 times higher endurance than conventional NAND. The drive has a cache memory up to 1GB, uses a Samsung3-core MDX controller and in-house firmware, SATA 6Gb/s interface, and boasts impressive performance numbers: sequential write up to 460MB/s and sequential read up to 530MB/s.

The Samsung 845DC PRO is an enterprise-grade SSD designed to deliver high performance, especially in random write, and consistent low latency over the life of the SSD. The 845DC PRO has adopted the world’s first 24-layer 3D V-NAND technology for its storage, giving it up to 10 times higher endurance than conventional NAND. The drive has a cache memory up to 1GB, uses a Samsung3-core MDX controller and in-house firmware, SATA 6Gb/s interface, and boasts impressive performance numbers: sequential write up to 460MB/s and sequential read up to 530MB/s. 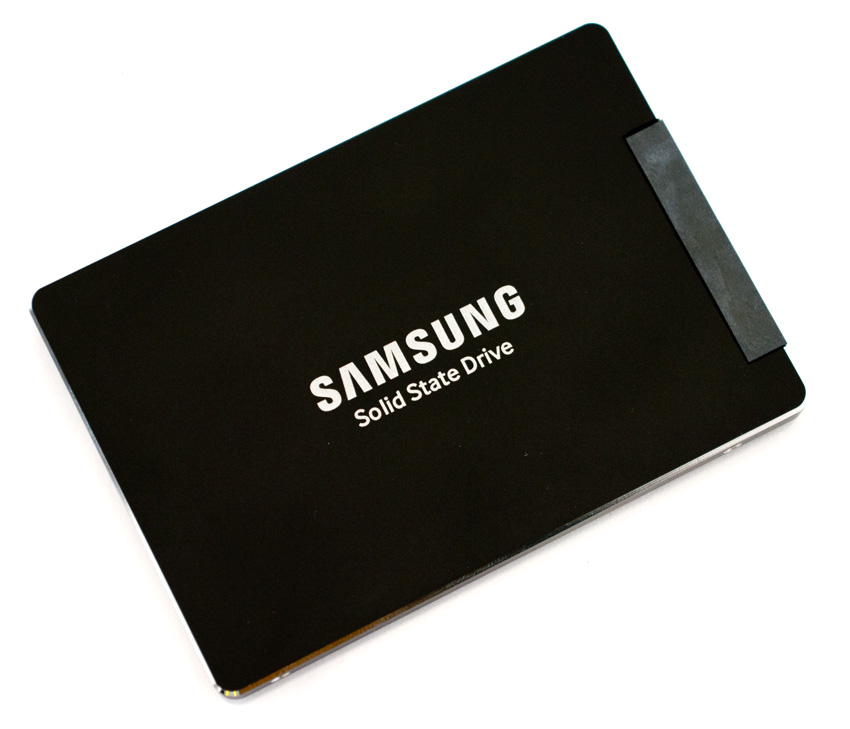 The Samsung 845DC PRO is designed for use primarily in servers. Like the Samsung 845DC EVO (TLC NAND), the PRO is aimed at both businesses and OEMs. The 845DC PRO is the first enterprise SSD to feature 3-D or V-NAND (V is for vertical). To address the loss of efficiency to scale traditional NAND down, Samsung is scaling the NAND vertically, increasing density and lowering costs. The faster and more durable V-NAND will shift focus of the drive to write performance and endurance.

The 845DC PRO not only boasts some high performance numbers it is also highly durable. Offering 10 drive writes per day workloads over 5 years, the SSD would be ideal for workloads such as caching, transactional database, high-performance computing, media editing, and database logs. The 845DC PRO also offers enhanced data reliability by using full end-to-end data protection, enterprise-grade power-loss protection, and Thermal Guard. And with other SSDs, it offers low power consumption to lower the energy footprint and cost of the datacenter with a price point that makes buying high-speed HDDs less viable.

The Samsung 845DC PRO comes in 400GB and 800GB capacities and is backed by a 5-year warranty. Our review includes 4x 400GB capacities.

The Samsung SSD 845DC PRO looks almost exactly like the Samsung SSD 845DC EVO. It has a sleek, minimalistic design like the EVO. The 2.5-inch, 7mm enclosure has a charcoal color and a solid metal construction for a rugged composition. The Samsung logo and “Solid State Drive” text in white font is in the middle of the drive. 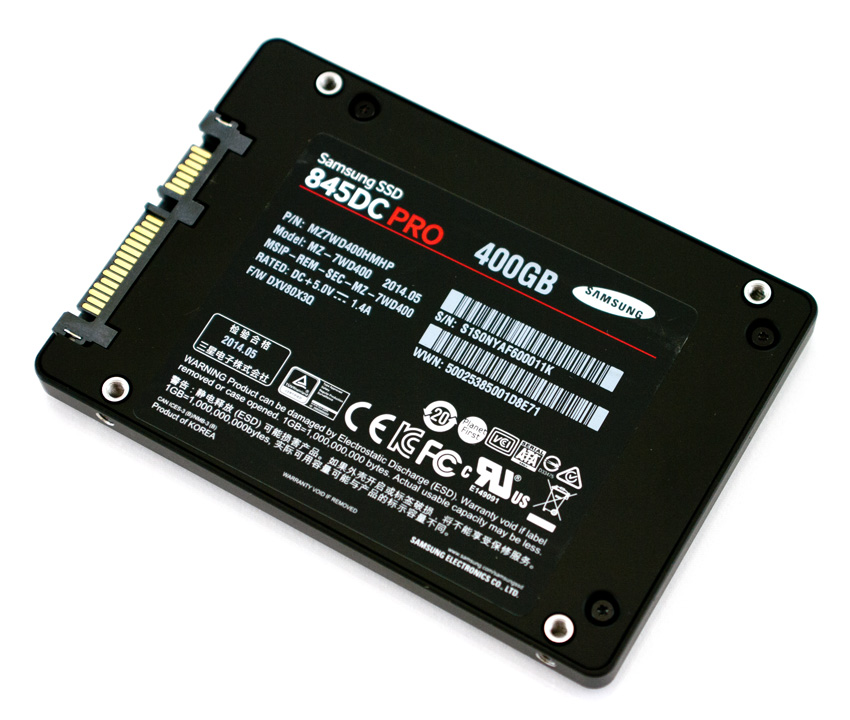 The 845DC PRO's thin design supports a wide range of applications ranging from ultra-high density enterprise applications like the EchoStreams 48-bay 2U SAN chassis to critical enterprise client applications. The reverse side of the Samsung SSD displays the product information label, which provides relevant information such as the capacity and serial number. The side profiles show the four screw holes, allowing the 845DC PRO to be mounted with ease. 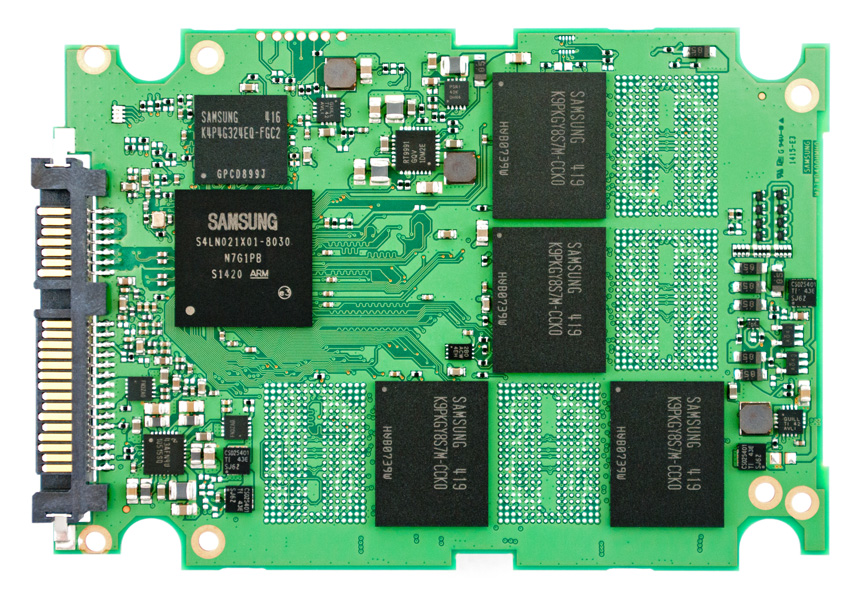 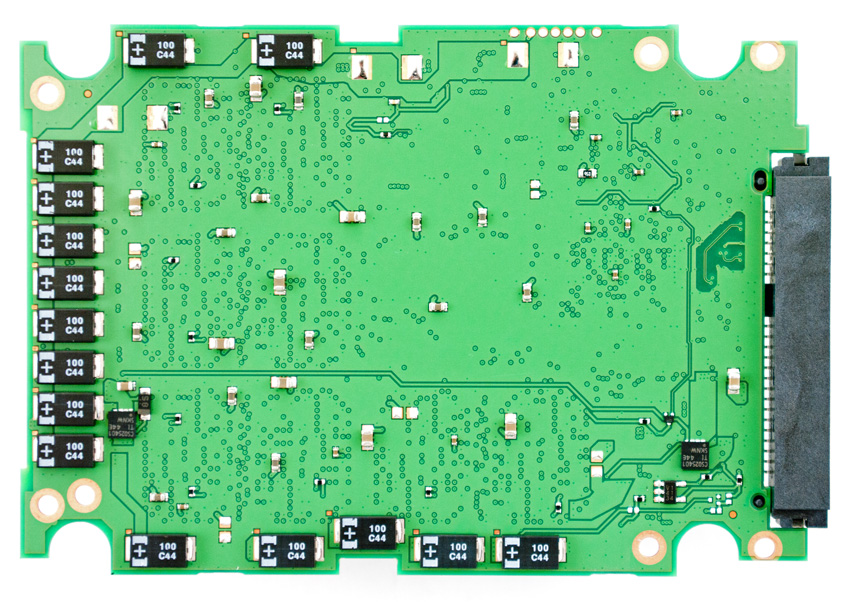 The capacity of the 845DC PRO comes from four 3D V-NAND K9PKGY8S7M-CCK0 chips.

In order to understand the performance characteristics of enterprise storage devices, it is essential to model the infrastructure and the application workloads found in live production environments. Our first three benchmarks of the Samsung 845DC PRO are therefore the MarkLogic NoSQL Database Storage Benchmark, MySQL OLTP performance via SysBench and Microsoft SQL Server OLTP performance with a simulated TCP-C workload.

The latency results for the majority of operations during the NoSQL benchmark below 15ms, though the 845DC pro did experience a couple of latency spikes, which is not abnormal for SSDs. It did performance with lower latency than the other Samsung drives. 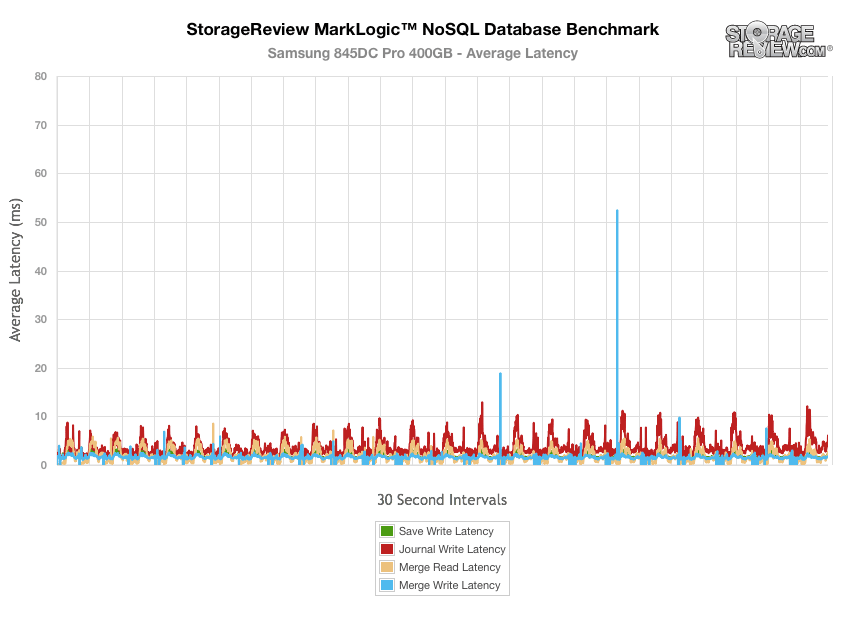 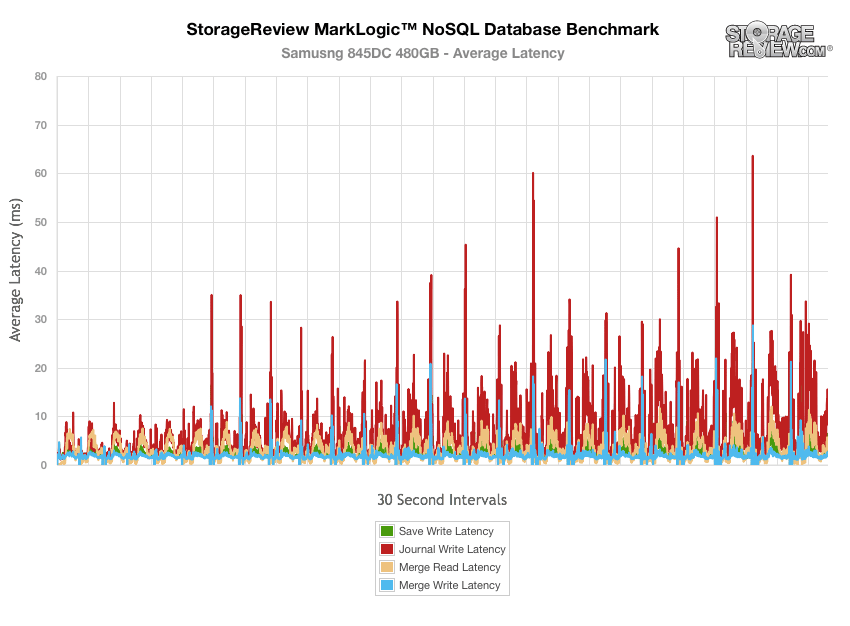 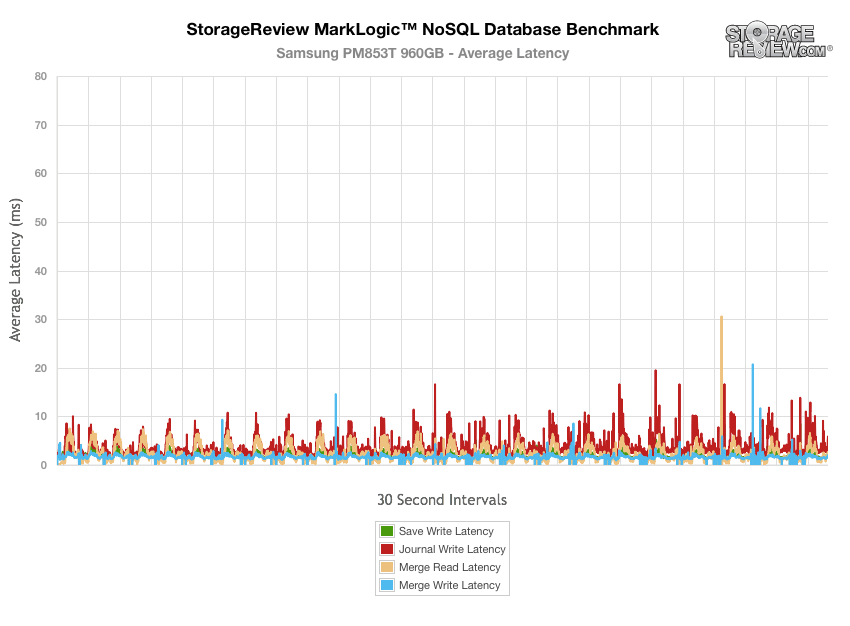 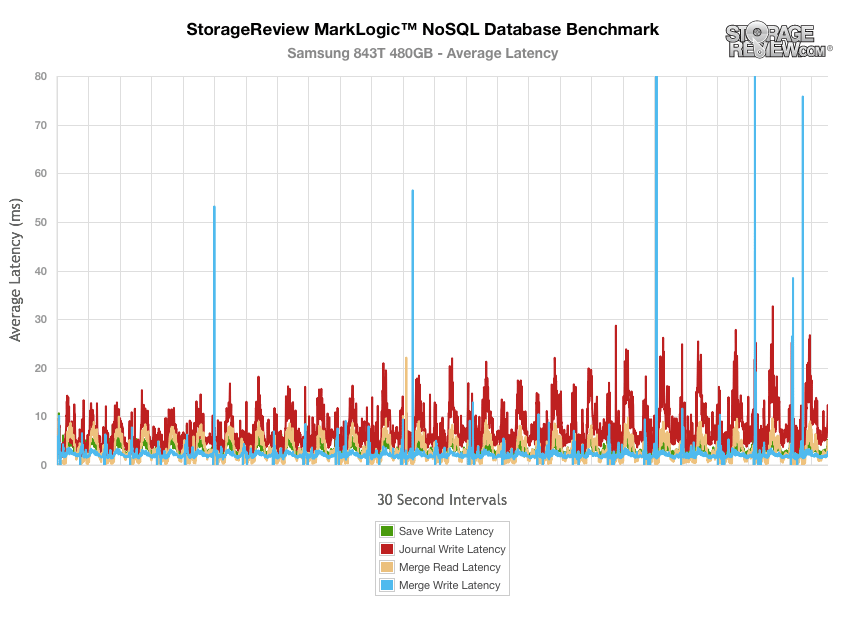 The next application benchmark consists of a Percona MySQL OLTP database measured via SysBench. In this configuration, we use a group of Lenovo ThinkServer RD630s as database clients and the database environment stored on a single drive. This test measures average TPS (Transactions Per Second), average latency, as well as average 99th percentile latency over a range of 2 to 32 threads. Percona and MariaDB are using the Fusion-io flash-aware application APIs in the most recent releases of their databases, although for the purposes of this comparison we test each device in their "legacy" block-storage modes.

At the time of this review, we recently upgraded the Lenovo ThinkServer RD630 used in Sysbench tests from dual Intel E5-2650 CPUs to dual E5-2690 CPUs, which slightly skews performance data from historical comparables. We included the data as reference, and will be re-benchmarking previously reviews SSDs for proper comparison.

The Samsung 845DC PRO remained near the top of the charts throughout the MySQL benchmark with 1,483 transactions per second at 32 threads workload. 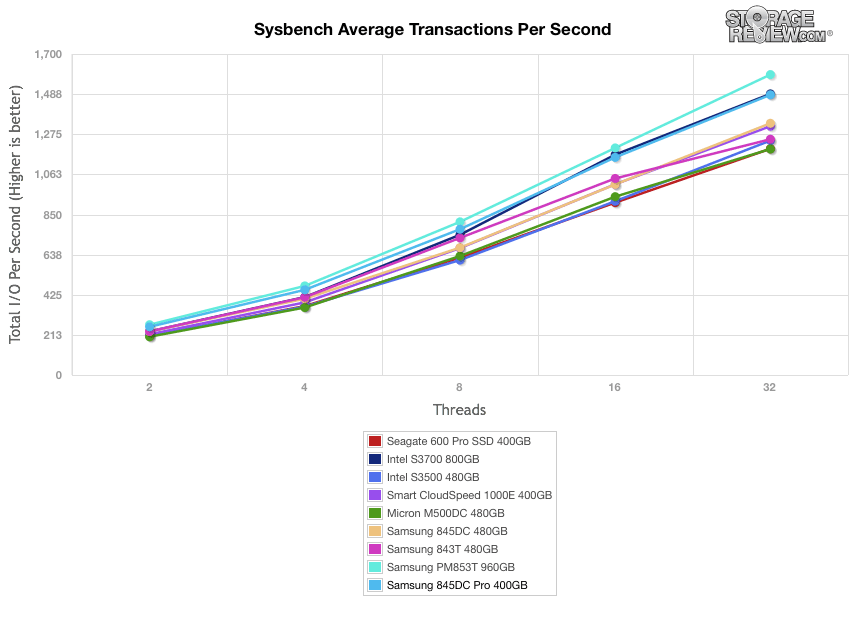 The Samsung 845DC PRO ran near the lowest average latency though it was slightly higher than the SM853T. 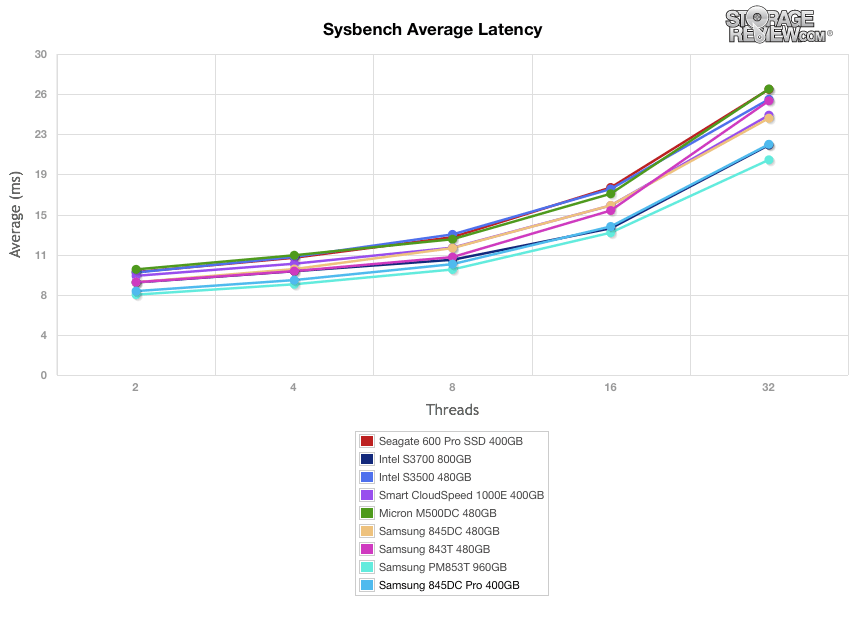 In our worst-case MySQL latency scenario, the Samsung 845DC PRO ran second to best. The only drive with lower latency was the Intel S3700. 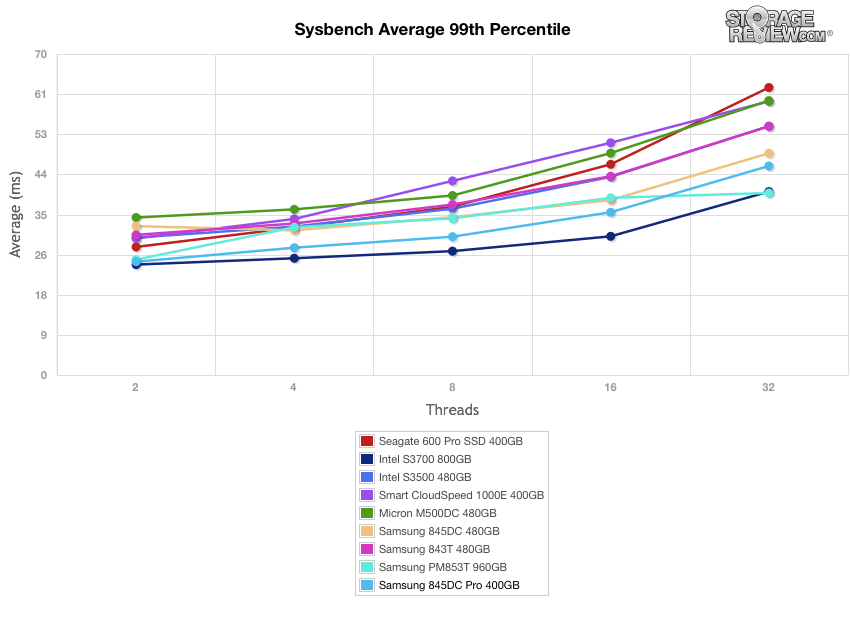 The Samsung 845DC PRO’s SQL Server Output TPS showed the best performance; however, there was very little discrepancy between most of the drives. 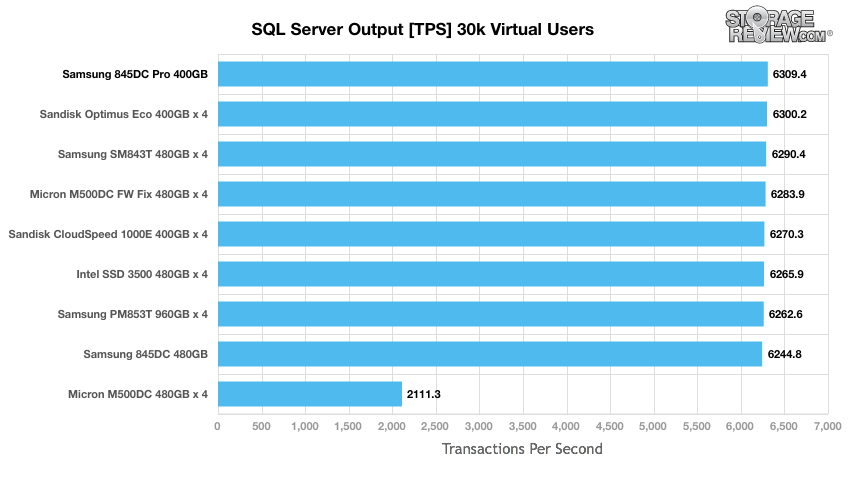 In our average latency benchmark, the 845DC PRO  again beat out all of the rest of the drives tested having an overall average latency of 12ms, a solid 7ms faster than the next closest drive. 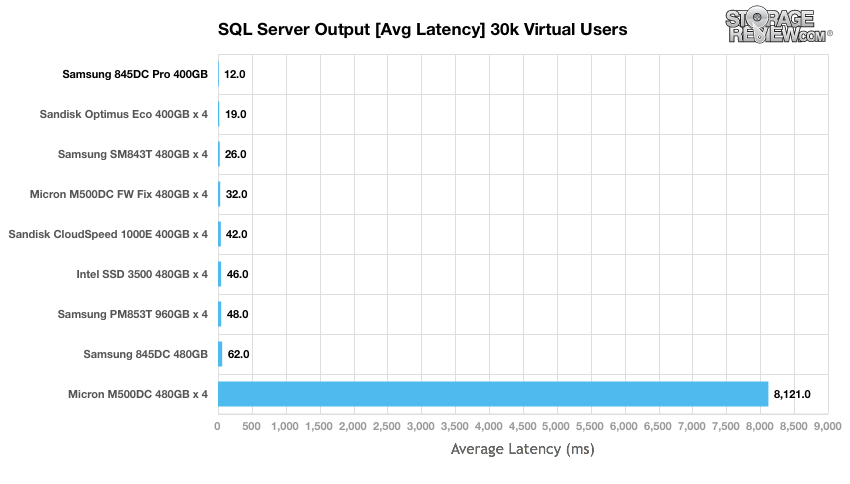 Once preconditioning is complete, each device being compared is then tested across multiple thread/queue depth profiles to show performance under light and heavy usage. Our synthetic workload analysis for the Samsung 845DC uses 4k and 8k profiles which are widely used in manufacturer specifications and benchmarks.

During the  4K preconditioning process, the Samsung 845DC PRO showed great results at the get go starting off at third, and was able to go to the top of the pack and stay there. It approached a steady state near 50,000IOPS. 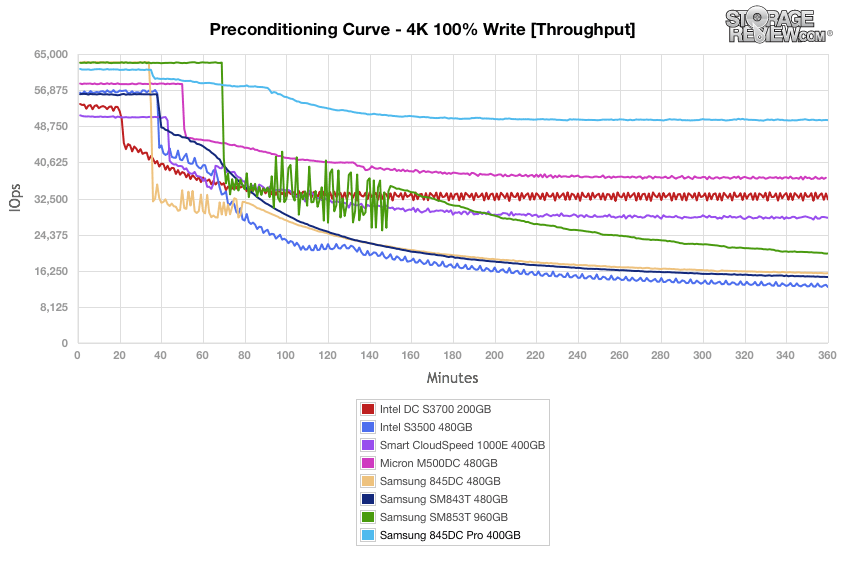 The 845DC PRO showed similar results to the above in preconditioning average latency. It started off strong and was able to take and maintain the lead throughout with the lowest latency. 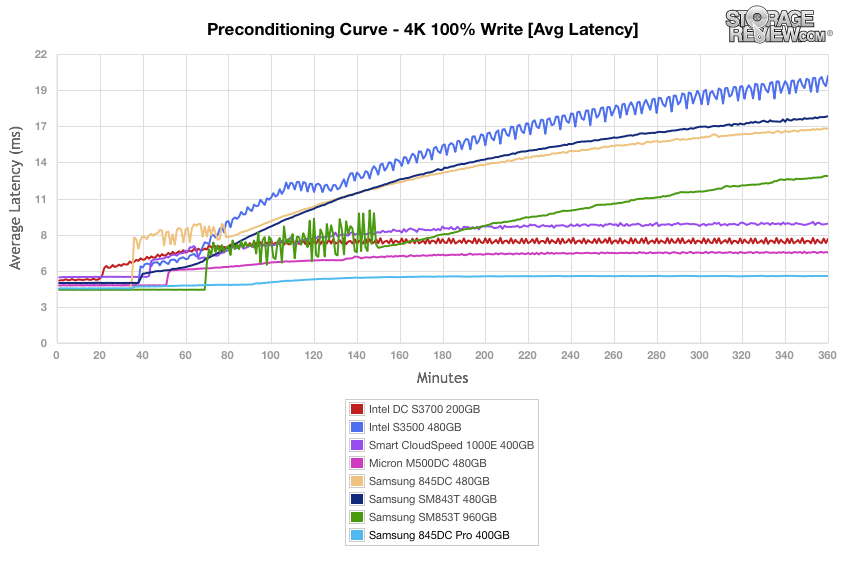 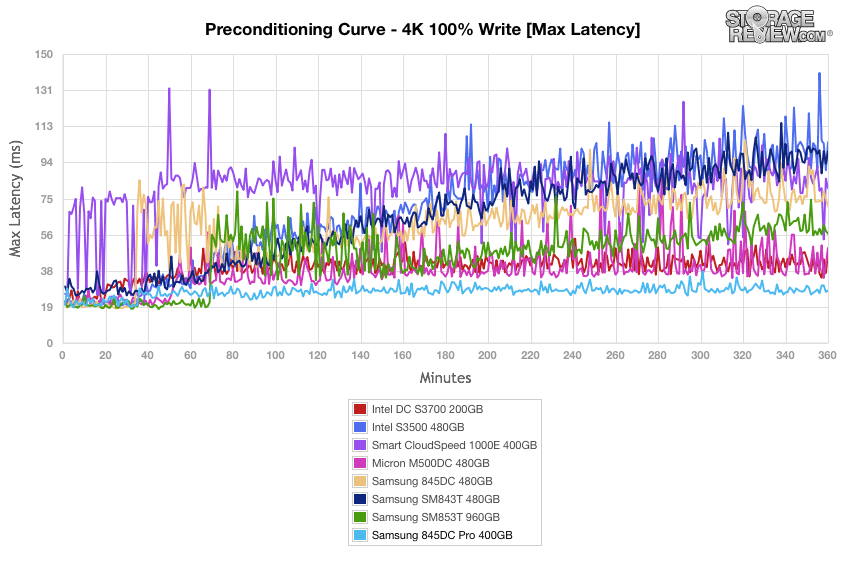 The 845DC PRO continued its good performance in standard deviation staying in the lead with low latency and little variance. 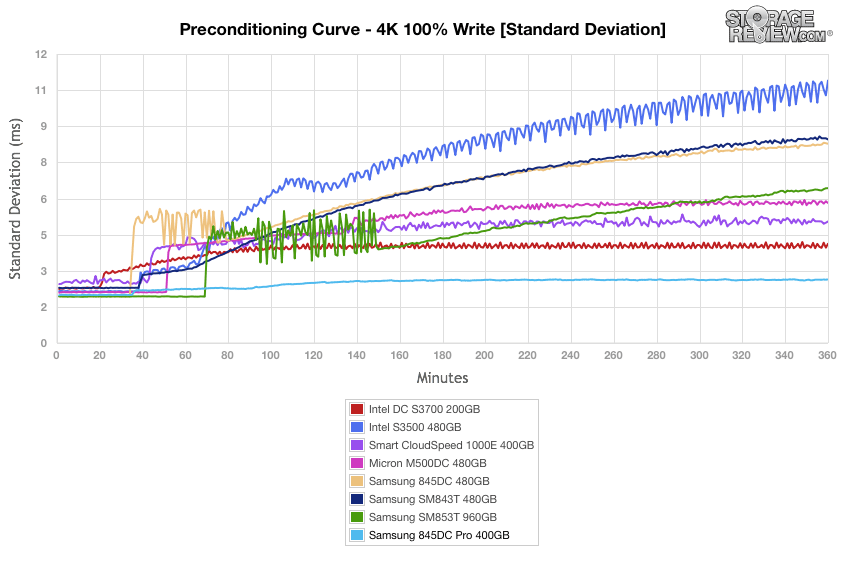 When looking at 4K throughput, the 845DC PRO again was at the top with a read throughput of 74,900IOPS (just beating out the Samsung 853T that had a performance of 74,669IOPS), and blowing the rest of them away with a write performance of 49,888IOPS, the next closest being about 12,000IOPS under the 845DC PRO.

With 4K average latency the 845DC PRO was again at the top of the pack and again barely nudging out the other in read and really surpassing the rest in write speeds.

Looking at standard deviation, the 845DC PRO returned to the top spot though it barely beat out the 853T in read speeds, with the speeds being 1.62ms and 1.63ms respectively.

Our next workload uses 8k transfers with a ratio of 70% read operations and 30% write operations. The 845DC PRO started off in second, dropped down to third around the 40 minute mark, retook second place at about 140 minutes, it maintained second place until near the very end of the test and then bumped up to first. 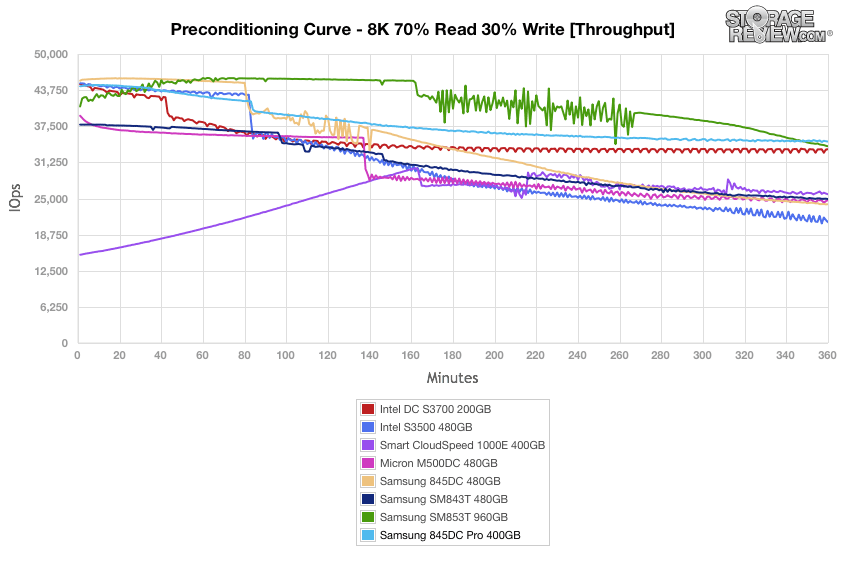 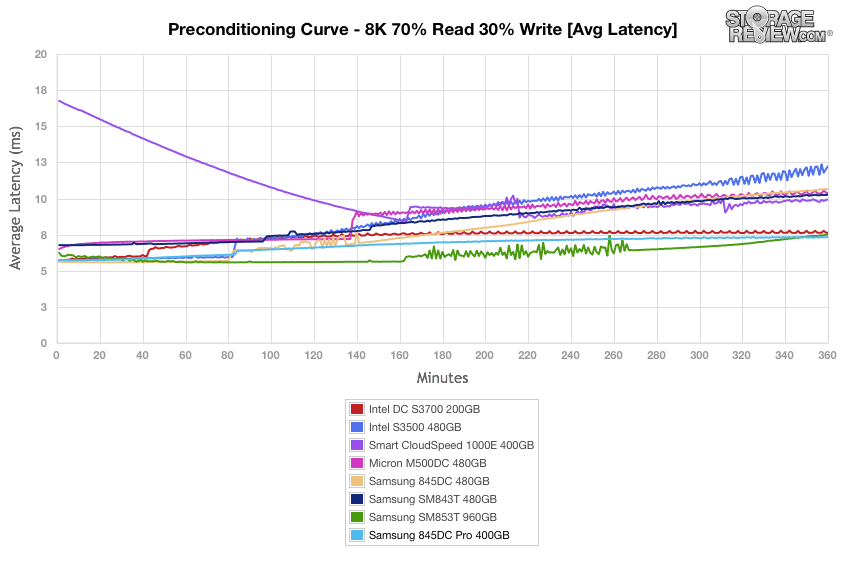 Maximum latency results for the Samsung 845DC PRO during our 8k 70/30 preconditioning oscillated up to near 56ms and ended up having one of the lowest max latencies with no major spikes whatsoever. 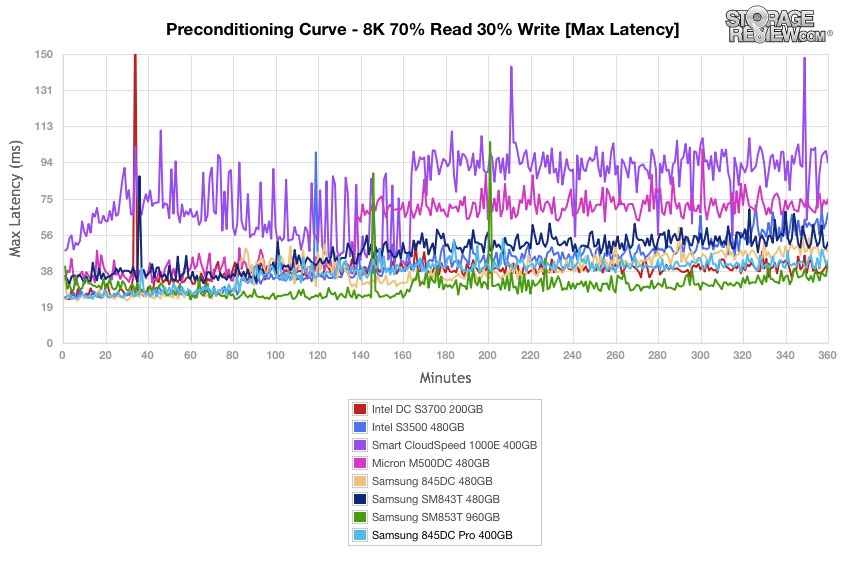 Standard deviation calculations for the 8k 70/30 preconditioning place the Samsung 845DC PRO as one of the top performers again, with a steady rise to only about 4ms by the end. 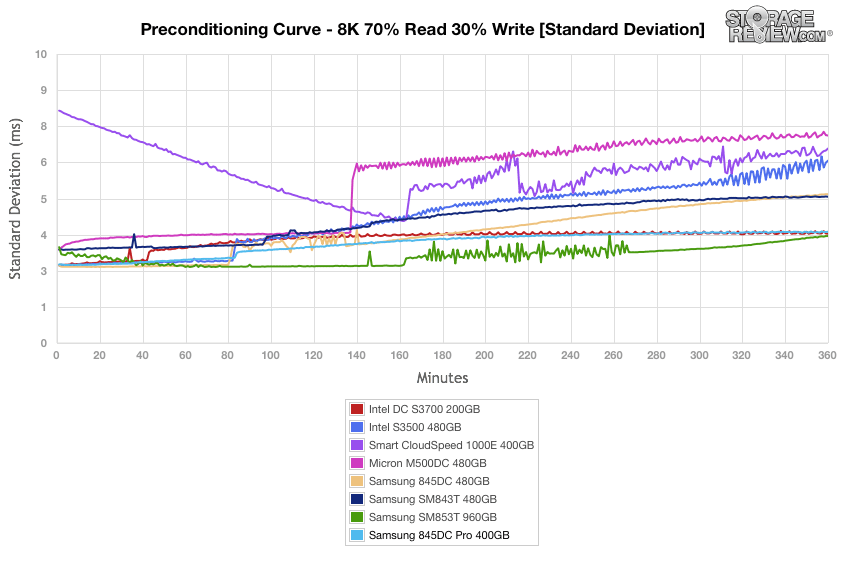 Once the drives are preconditioned, the 8k 70/30 throughput benchmark varies workload intensity from 2 threads and 2 queue up to 16 threads and 16 queue. The 845DC PRO started out with the best performance and maintained the lead throughout peaking at 35,000IOPS. 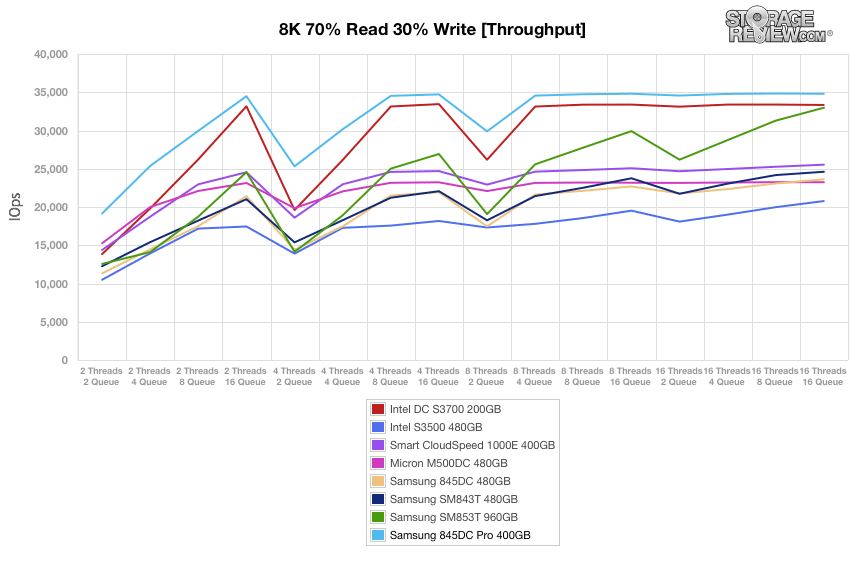 In our average latency test three drives ran near the top with the lowest latency but the 845DC PRO edged out the others to be the top performer once again. 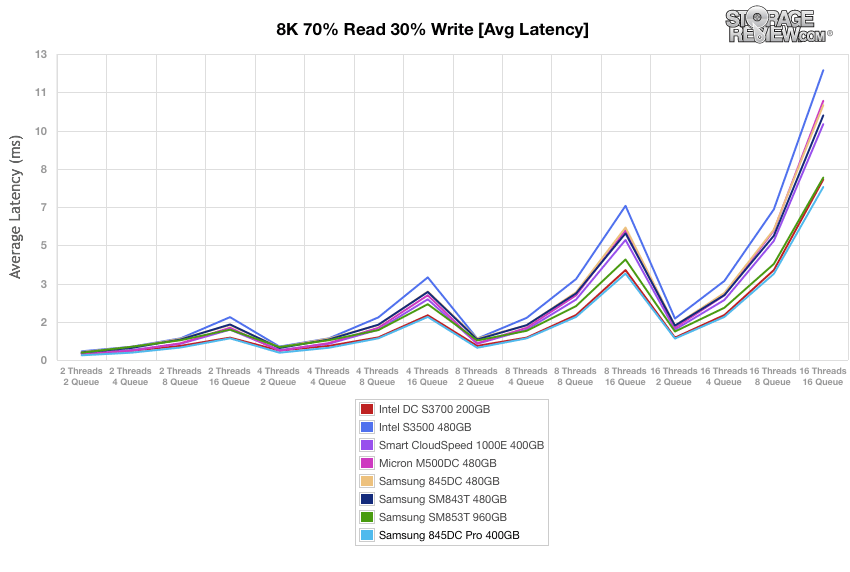 Our 8k 70/30 max latency saw the 845DC PRO running near the best again but it did fall slightly behind both the Samsung 845DC and the Samsung SM853T. 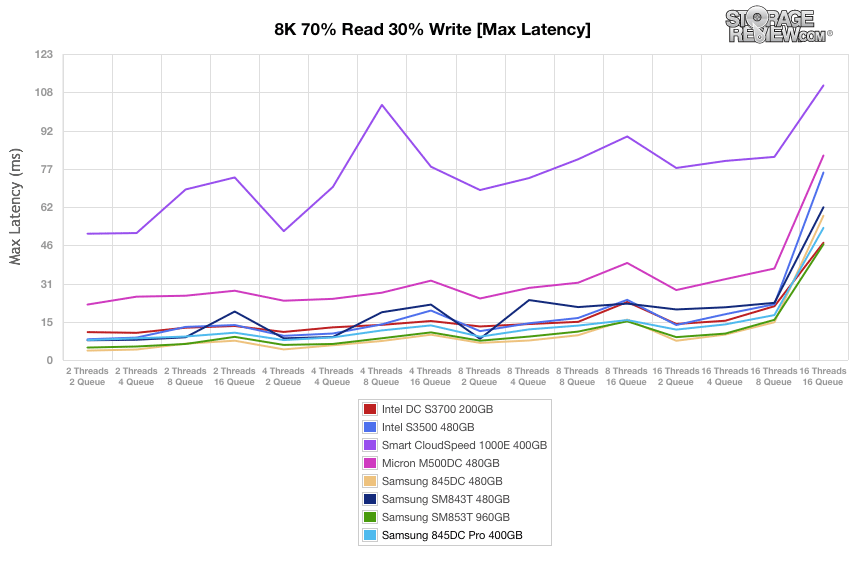 Looking at our standard deviation test, the 845DC PRO again beat out the other drives though in higher queue depths it did fall behind the 853T. 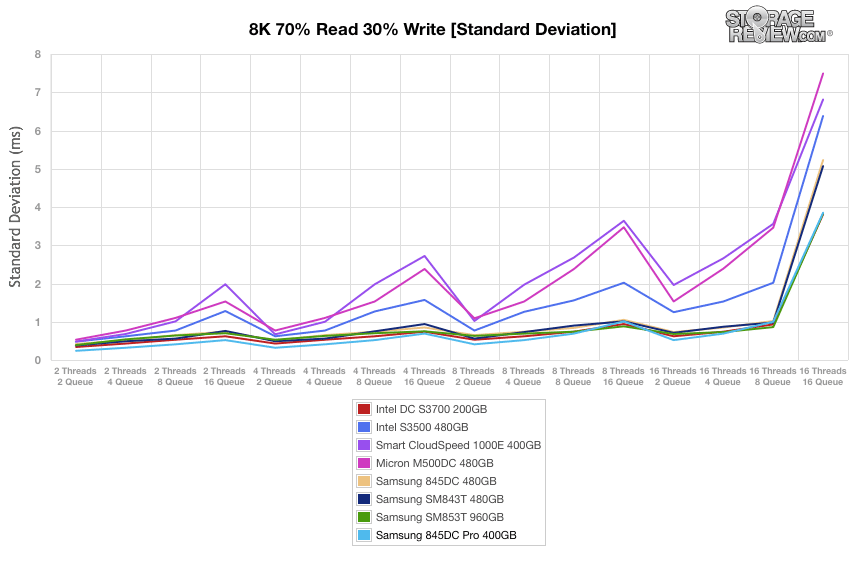 The Samsung 845DC PRO is a 2.5” SATA enterprise SSD aimed at applications that are mixed or write heavy workload specific. It has the world’s first 24-layer 3D V-NAND technology, a Samsung 3-core MDX controller, and up to 1GB of cache memory. It comes with very impressive performance and endurance claims. The 845DC PRO supports up to 10 DWPD over 5 years, low power consumption, and enhanced data reliability thanks to features like power fail protection. Overall the drive is an impressive build of materials that continues to highlight Samsung's prowess as a vertically integrated provider.

Looking at its performance, the Samsung 845DC PRO either came in at the top or near the top across application and synthetic benchmarks. For example, in our application workload analysis the 845DC PRO was one of the top performers in our Sysbench MySQL database test as well as the top performer in our MarkLogic NoSQL Database benchmark and our SQL Server tests. Looking at our synthetic workload analysis, the 845DC PRO dominated the field in the 4k tests and in our 8k 70/30 tests falling behind the 845DC EVO and SM853T on the max latency. It was one of the top performers in the 8k preconditioning tests and though it wasn’t always the best it was the most consistent.

The Samsung 845DC PRO brings new NAND technology to the enterprise SSD space that is getting a little behind in terms of innovation. Samsung's new drive leverages the V-NAND and in-house controller and firmware to post excellent scores in all of our database tests in addition to impressive performance in the synthetics.