Alongside the launch of the larger 6TB capacity Red HDDs with NASware 3.0, WD also launched a new family of NAS drives dubbed Red Pro. The Red Pro HDDs spin at 7,200RPM, come in capacities of up to 4TB, and are designed for larger tower or rackmount NAS environments in the 8 to 16 bay range. Aside from support for larger environments, the Red Pro line of HDDs differentiates from Red in that the drives are faster, 7K spindle speed, extended thermal burn-in testing, hardware-based vibration compensation and a longer warranty.

Alongside the launch of the larger 6TB capacity Red HDDs with NASware 3.0, WD also launched a new family of NAS drives dubbed Red Pro. The Red Pro HDDs spin at 7,200RPM, come in capacities of up to 4TB, and are designed for larger tower or rackmount NAS environments in the 8 to 16 bay range. Aside from support for larger environments, the Red Pro line of HDDs differentiates from Red in that the drives are faster, 7K spindle speed, extended thermal burn-in testing, hardware-based vibration compensation and a longer warranty. 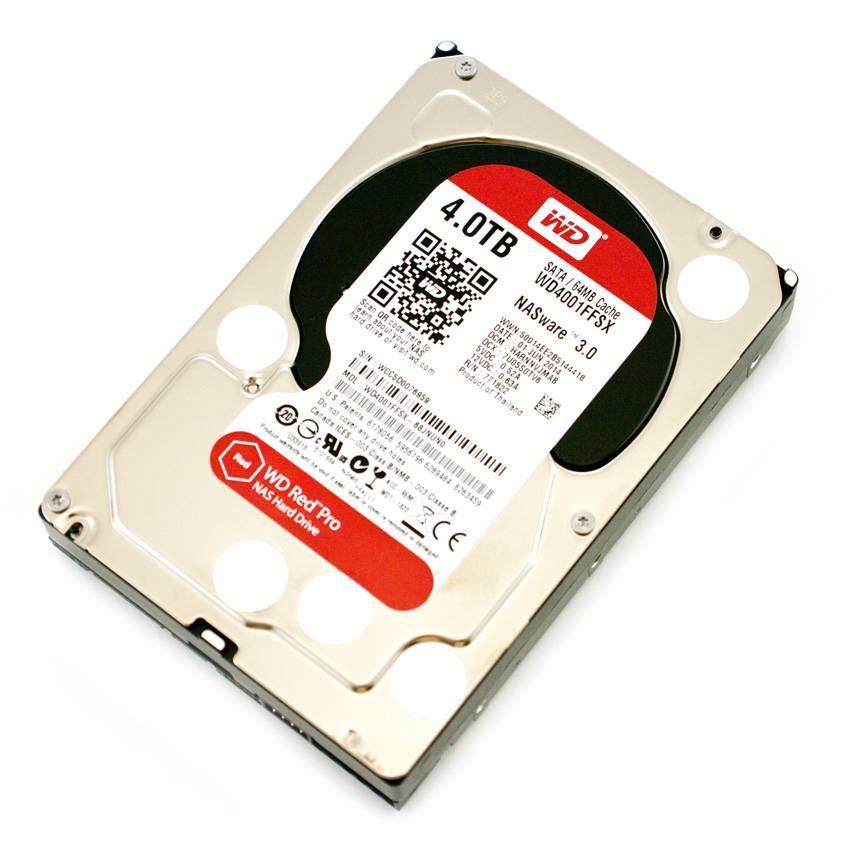 Though desktop hard drives are an affordable alternative to enterprise drives, they are designed for performance and reliability in a desktop personal computer and not inside a device like a NAS. Desktop drives have a greater of risk for possible data loss and even failure in an always-on, RAID configured NAS system. The WD Red Pro line of HDDs are designed specifically to address these issues and are built with NASware 3.0, in addition to additional enterprise-grade NAS features. At its core, NASware 3.0 is designed to improve reliability and system performance, reduce customer downtime, and to simplify the integration process. Additionally, optimized power usage of WD Red Pro drives allow for significant power savings and lower hard drive operating temperatures within small NAS environments. The Red Pro is also based off of WD's Se drive, bringing NAS specific features to a well-known HDD platform.

Our review consists of 8x WD Red Pro NAS HDDs configured in a Synology DS1813+. All drives ship with a limited 5-year warranty.

The WD Red Pro HDDs are of the standard 3.5 Inch form factor. The enclosure of the drive is an all metal, silver color build with red trim at the top and bottom, the latter indicating that it is of the Red Pro line of hard drives. Also on the front of the WD Red Pro is information pertaining to its capacity, model number, and specifications. 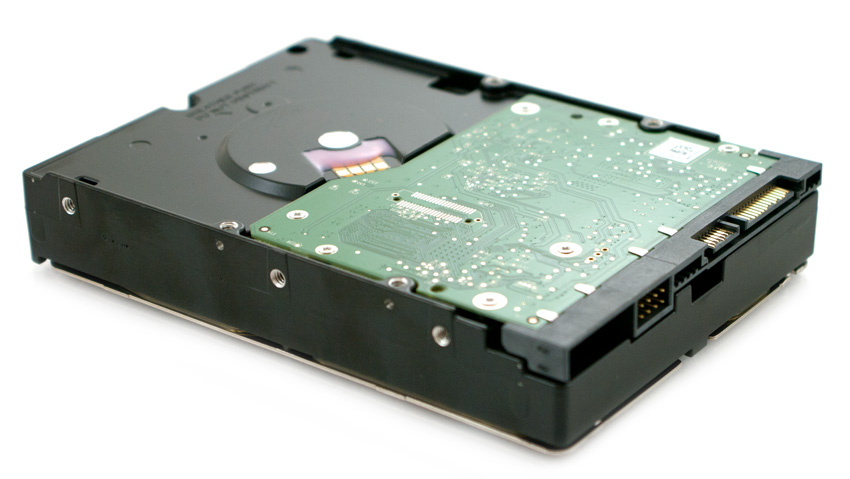 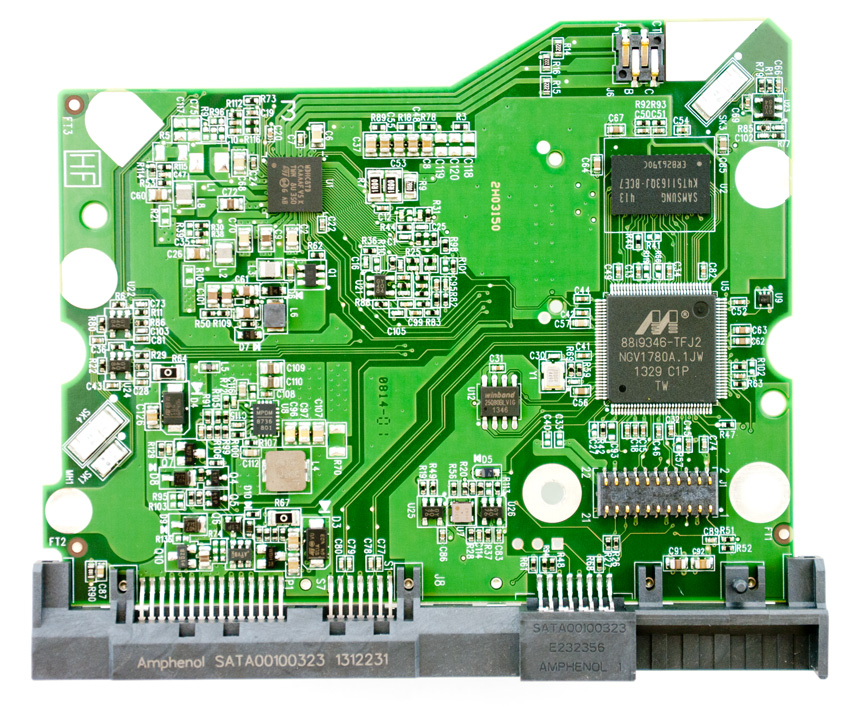 Our synthetic enterprise storage benchmark process begins with an analysis of the way the drive performs during a thorough preconditioning phase. Each of the comparable drives are secure erased using the vendor's tools, preconditioned into steady state with the same workload the device will be tested with under a heavy load of 16 threads with an outstanding queue of 16 per thread, and then tested in set intervals in multiple thread/queue depth profiles to show performance under light and heavy usage.

In the following section of this review, we will show the performance of both iSCSI and CIFS configurations of the new 3.5" WD Red Pro 4TB HDDs. WD supplied StorageReview with 8 samples of their new HDDs, which we configured in RAID10 in our Synology DiskStation DS1813+.

We will be including the following drives as comparables in the same DS1813+ configuration:

In our first test measuring 4K random performance, the WD Red Pro 4TB iSCSI offered performance right at the top of the leaderboard, taking first place in writes and just behind the Seagate ES.3 and HGST NAS in reads.

In the CIFS configuration of the same test, the results were virtually identical, though the WD Red Pro drive dropped one place in the read column.

The average latency from the WD Red Pro ranked at the top of the pack for both read and write, showing significant improvements over the non-Pro WD Red drive.

In our CIFS configuration, the WD Red Pro was again the top performer for average latency in the write column, but posted read latency in the middle of the pack.

When comparing max latency in the iSCSI configuration, the WD Red Pro came first place by a significant margin when it came to peak write latency, although ranked in the middle of the pack with its higher write latency.

Switching to the CIFS configuration of the same test told a similar story, with the WD Red Pro as the top performer in for peak write latency but falling a bit short in the read column.

When looking at latency consistency, the WD Red Pro was at the top of the leaderboard for both read and write standard deviation, just behind the Seagate ES.3.

This was also the case in the write standard deviation for the CIFS configuration, though it moved to the middle of the pack in the read column.

Our next test shifts focus from a pure 4K random read or write scenario to a mixed 8K 70/30 workload where we  will show how performance scales in a setting from 2T/2Q up to 16T/16Q.

When measuring throughput, the WD Red Pro and Seagate ES.3 HDDs in iSCSI configuration boasted the top results, with an IOPS of 1,851 and 1,852 respectively. 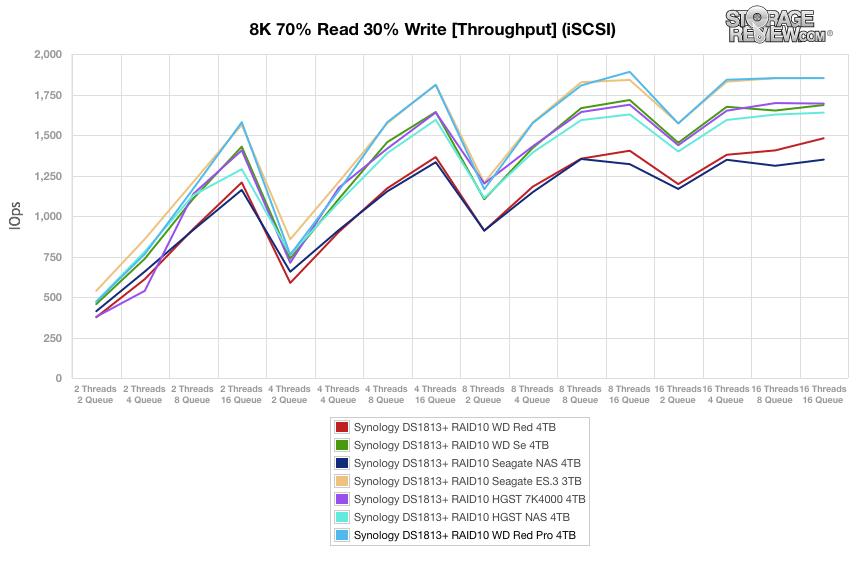 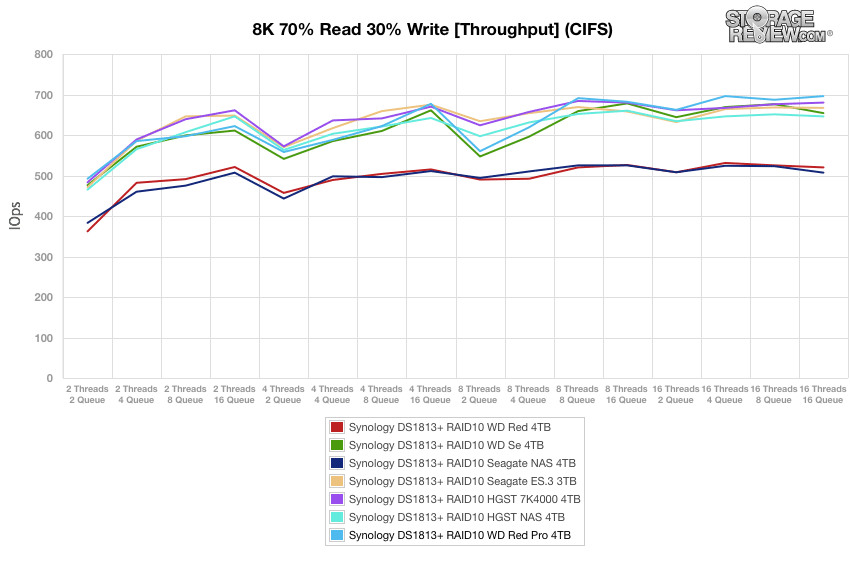 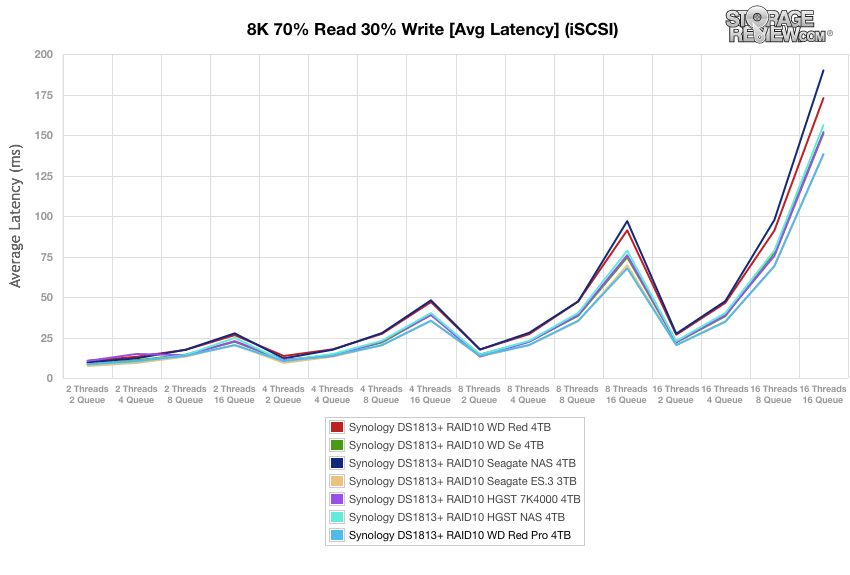 In our CIFS configuration, the WD Red Pro also ranked at the top of the leaderboard, boasting the lowest average latency. 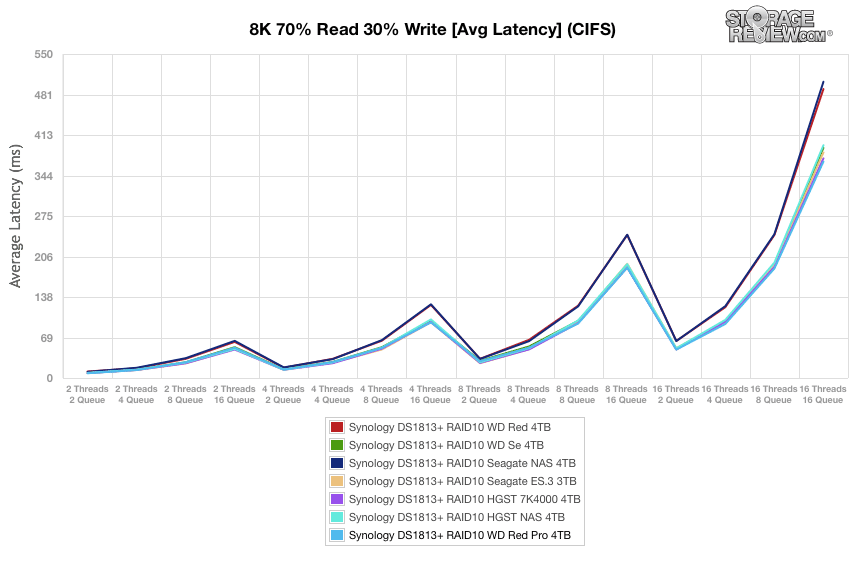 Looking at max latency, we see that the WD Red Pro was leading the way until the very end, where it took spike in latency and ultimately ending up at third spot with 1543.38ms. 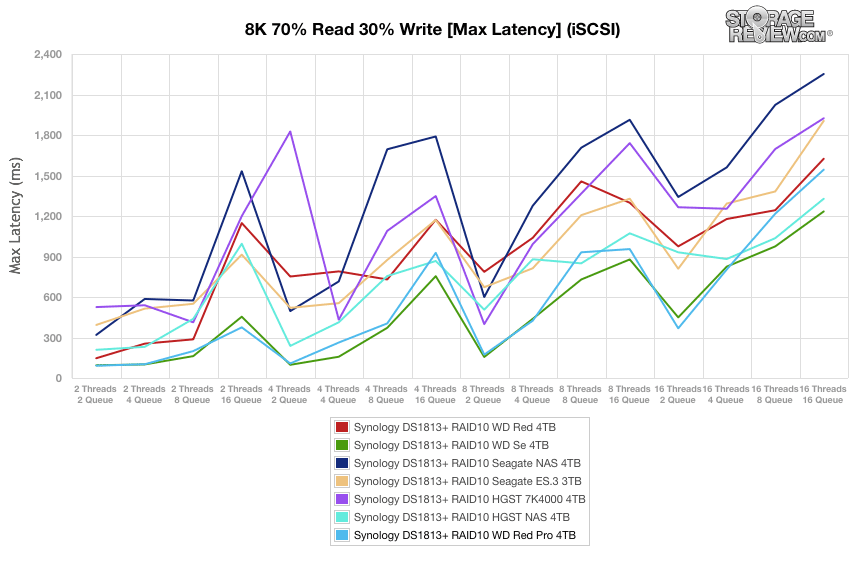 The WD Red Pro CIFS configuration showed max latency results at the bottom of the pack, taking last place by a large margin. 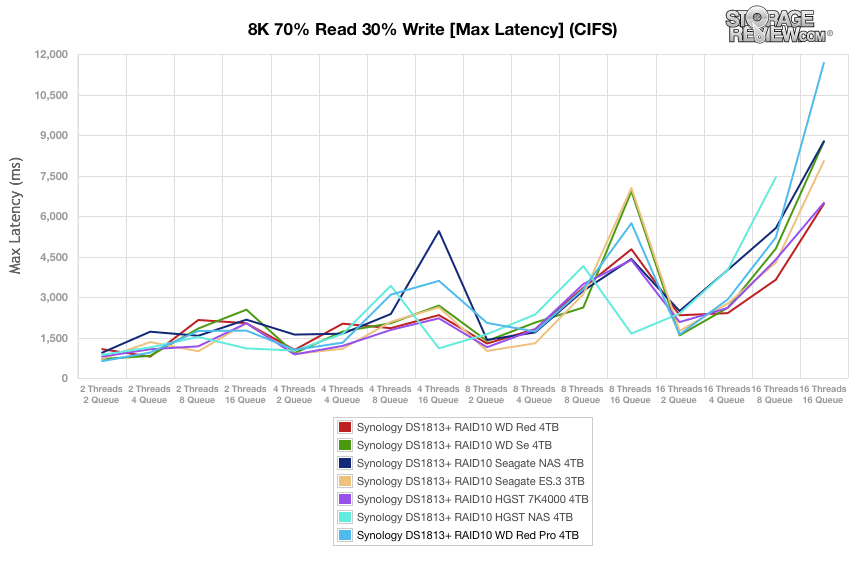 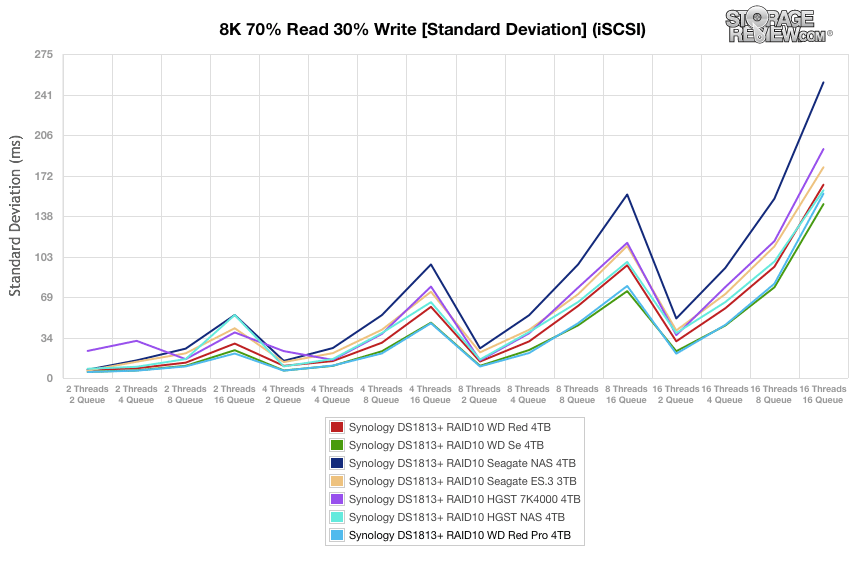 In the CIFS configuration, the WD Red Pro performed in the middle of the pack when measuring consistency in our standard deviation test. 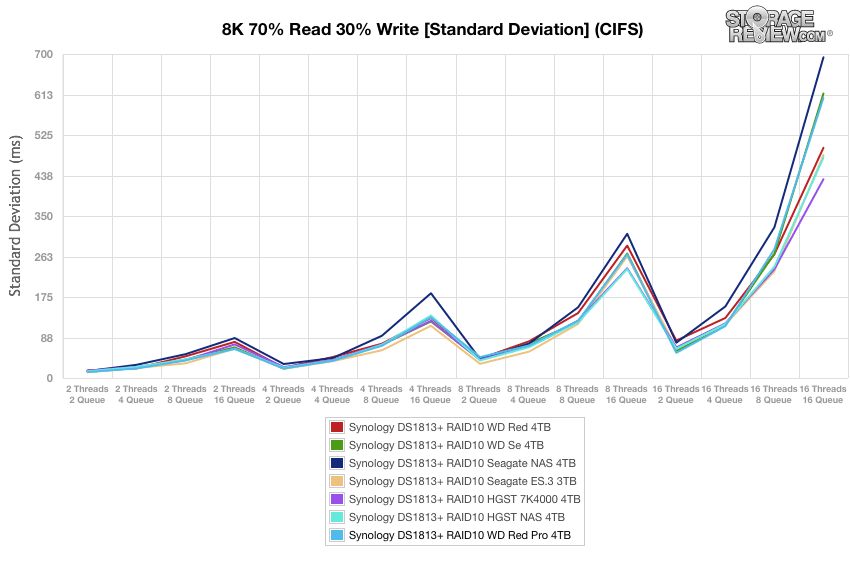 While the first part of the workload comparison focused on random workload performance, our second half measures small and large-block sequential transfer speeds. In our first test, we measure 8K sequential performance, in which the WD Red too third place in both read and write. The WD Se 4TB took the lead in the write column while the Seagate ES.3 showed the best read activity.

Looking at your CIFS configuration, the WD Red Pro boasted results in the middle of the pack for write activity (though just barely behind the leaders), while taking last place in reads.

Our last test looks at large-block sequential performance, which the WD Red Pro took the overall lead in the group; first in writes and second in reads.

In our CIFS configuration, however, it performed at the bottom of the pack in both the read and write column.

In our extensive benchmarking tests, which used a configuration of RAID10 in our Synology DiskStation DS1813+, the WD Red Pro HDDs offer strong performance in many of our workloads.  In our 4K random performance, the WD Red Pro boasted numbers that ranked at the top of the leaderboard across the board when it came to both sequential transfer speeds and latency readings. Our mixed 8K 70/30 workload–where we measure scaled performance in a setting from 2T/2Q up to 16T/16Q–showed similar results; however, in our WD Red Pro HDDs in CIFS configuration showed a very high max latency, taking last spot by a significant margin. Overall though, the 8-drive configuration in our DS1813+ showed that the Red Pro has the ability to boast superior performance over other 3.5" NAS-specific drive offerings with a battle-tested firmware stack designed explicitly for the enterprise NAS space.