The Seagate Backup Plus Slim is the space-saving version of Seagate’s performance-heavy portable drive family and is the thinnest portable 2TB hard drive on the market. We recently reviewed its larger brethren, the Backup Plus Fast, and found it very fast and affordable with easy-to-use management software. We expect more of the same with the Slim version, though at lesser transfer speeds due to the single drive configuration in the Slim vs. the twin drives in RAID0 found in the Plus Fast.

The Seagate Backup Plus Slim is the space-saving version of Seagate’s performance-heavy mobile portable family and is the thinnest portable 2TB hard drive on the market. We recently reviewed its larger brethren, the Backup Plus Fast, and found it very fast and affordable with easy-to-use management software. We expect more of the same with the Slim version, though at lesser transfer speeds due to the single drive configuration in the Slim vs. the twin drives in RAID0 found in the Plus Fast. 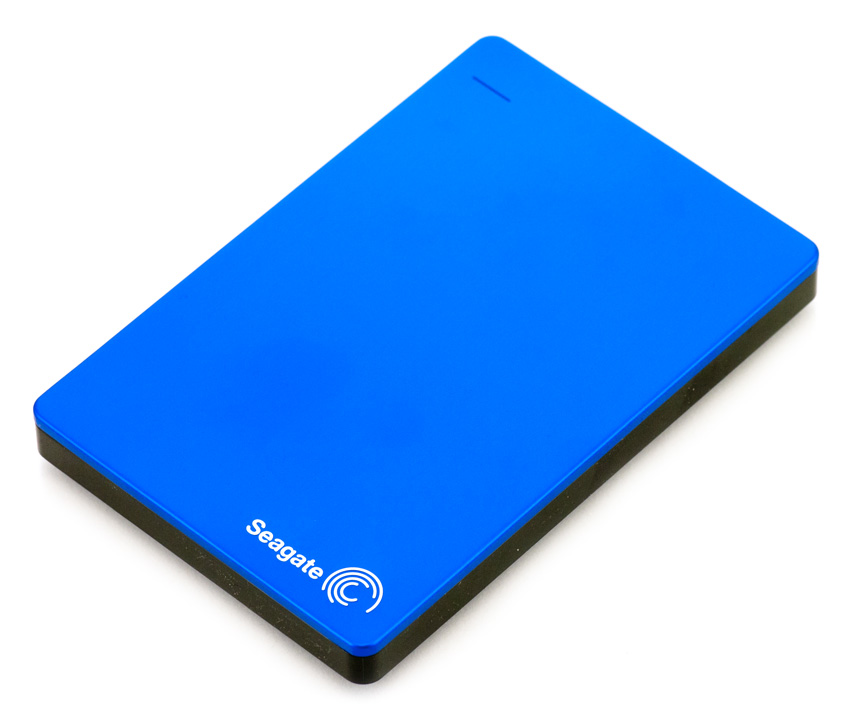 Like most mobile drives, the Backup Plus Fast Slim is fully USB powered, giving users the ability to bring all of their digital content without having to carry an additional external power supply while on the go. This makes Seagate’s new drive even more portable, fitting easily into most pockets. Also included is the Seagate Dashboard, which is preloaded on the drive, allowing users to schedule and automate backups for their computer and mobile devices as well as automatically backing up content on Facebook and Flickr. Another unique feature is the ability to share new videos to a YouTube account. Additionally, a Seagate Mobile Backup app for the iOS and Android mobile devices is available free for download, allowing users to back up all of their data to the drive while on the same network as well as to the cloud when on the go.

The Seagate Backup Plus Slim comes in 500GB, 1TB, and 2TB capacities (currently at street pricing $70, $90, and $119) in a variety of colors and includes a two-year warranty. We will be looking at the 2TB blue model for this review.

Unlike the Seagate Plus Fast’s smooth metallic enclosure, the Plus Slim’s body consists of a plastic build with a bright blue top cover; the company logo is located on the bottom corner and there’s a drive activity light near the back. While we don’t normally get too wrapped up on colors, the blue top on this enclosure really pops and looks great.

Its side trim is glossy black while the back panel is matte black, the back houses the USB 3.0 port. 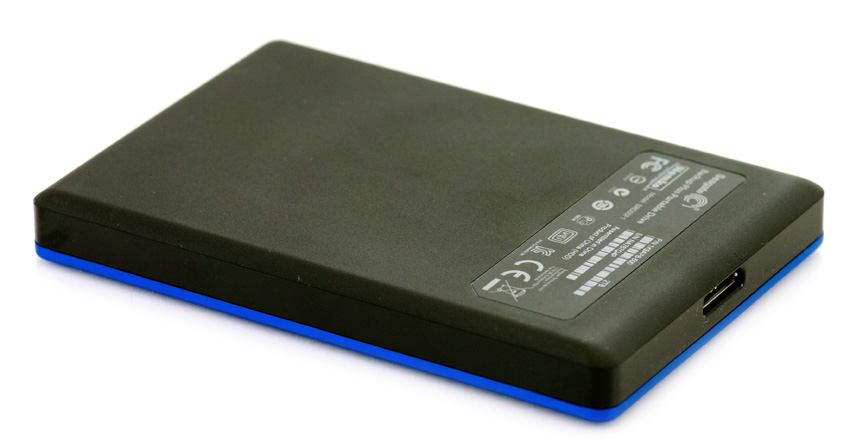 With its thin plastic casing, the covers flex inward until they touch the drive inside if you grip it with your fingers hard enough. That said, it’s not a bad design, but it’s just not quite as sturdy as the Plus Fast model. So long as you don’t plan on storing the unit in a vice, it should hold up find to the typical rigors of being tossed around in a backpack or the like.

Like the Backup Plus Fast, the Dashboard software is included with the Slim version and is conveniently located on the drive itself. To install the Dashboard software, users can simply double-click the file (.dmg for Mac users, .exe for PC) and follow the onscreen instructions after the flashy intro screen has finished, with sound effects and all. 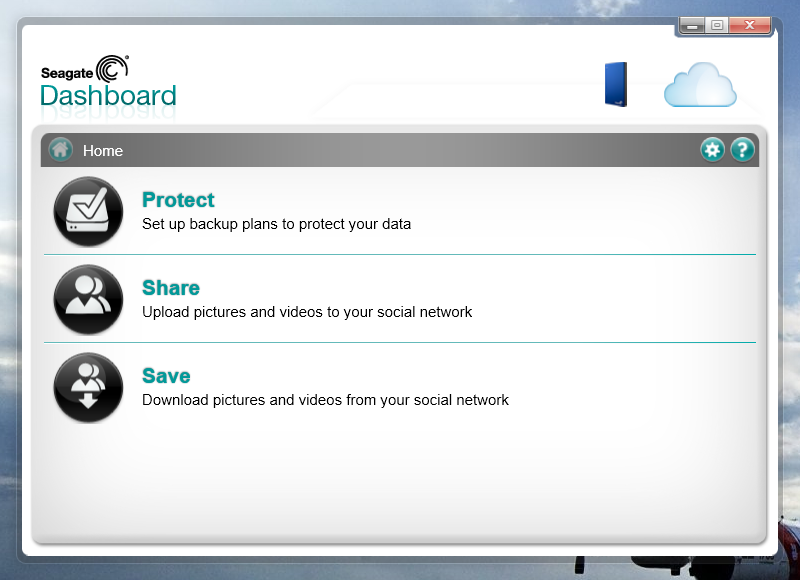 The Home section of the Dashboard displays the main functions of the software including Protect, Share, and Save options. 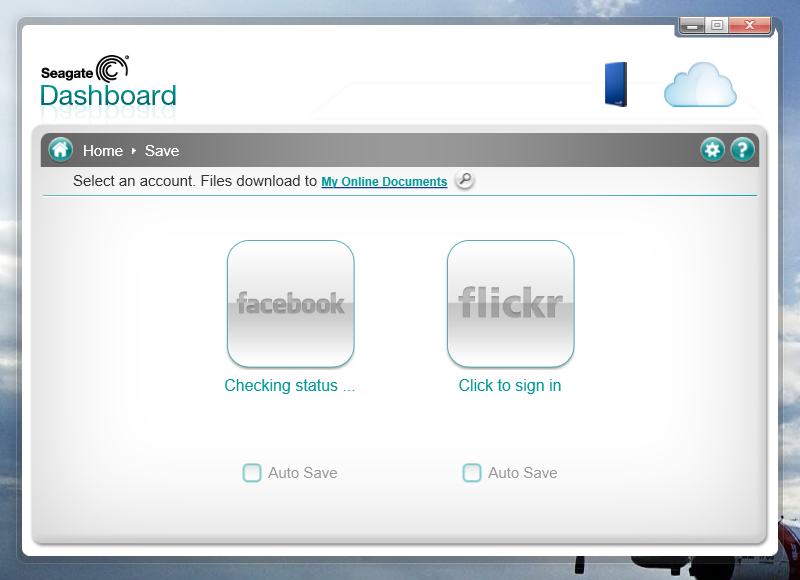 The Save section of the Dashboard allows users to download and back up images from their Flickr and Facebook accounts. All you need to do is simply log in. You can choose to have it done automatically as well. 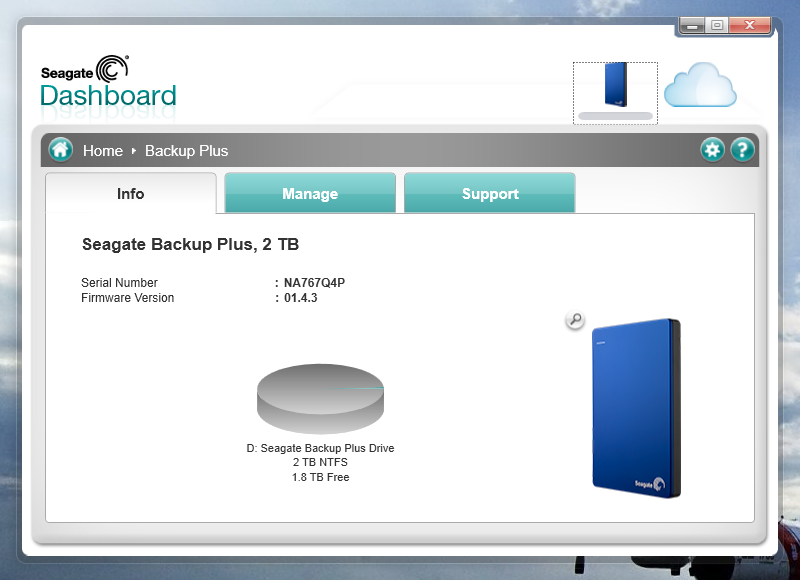 The Info tab shows all relevant information about your Seagate drive, such as the serial number and firmware version. 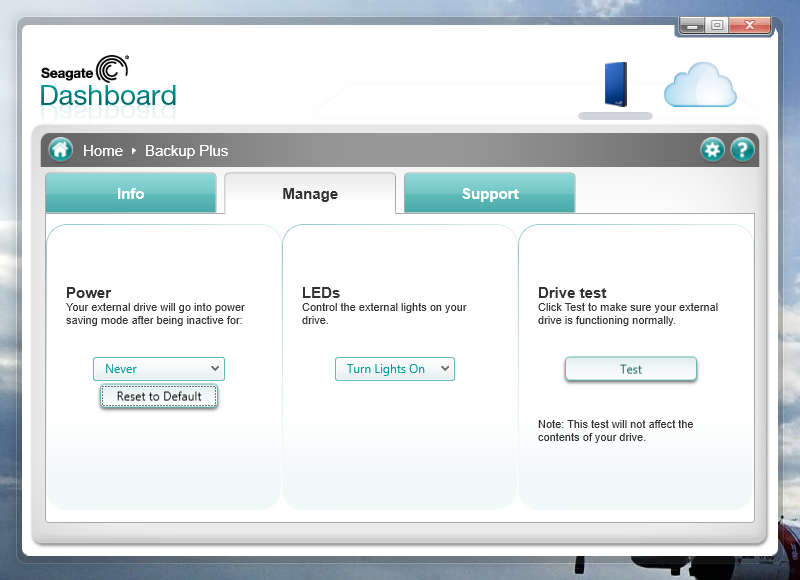 The Manage tab allows users to configure Power (sleep mode) and LED (on/off) options as well as the ability to test your drive and see if it is functioning correctly. 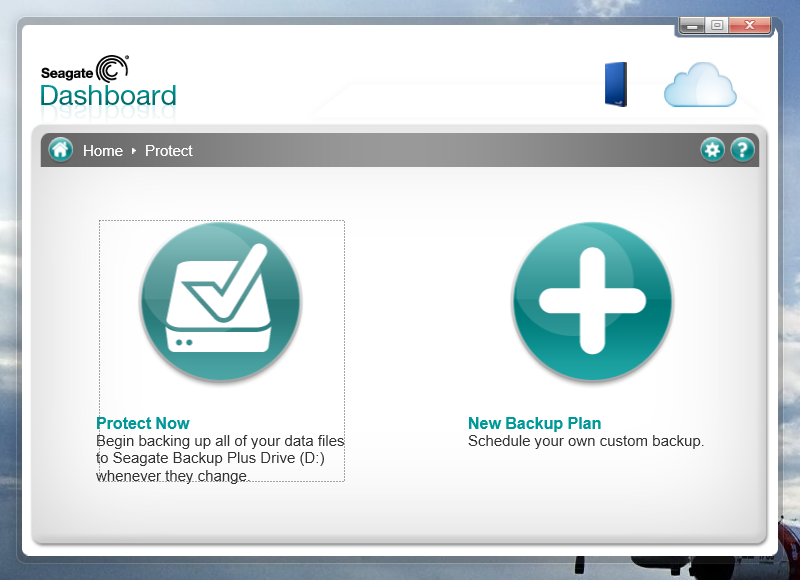 The Protect section is where users will find the simple backup feature. All you have to do is click the Protect Now icon, which backs up all your data whenever your files are modified. Additionally, you can also customize scheduled backups.

Our comparables for this review are the following:

Using our Consumer Testing Platform, we measured 2MB read and write sequential speeds of the Seagate Backup Plus Slim at 88.6MB/s and 119.3MB/s respectively. Its Plus Fast brother boasted 237.2MB/s in the write column and 183.4MB/s for read activity, which was an expected disparity in results based on the Fast’s dual-drive build configured in RAID0. The LaCie Fuel (USB 3.0) measured 98.3MB/s read and 109.1MB/s write while the Rugged USB 3.0 performance hit sequential 2MB speeds of 112.2MB/s read and 114.0MB/s write. We also measured transfer speeds from the Toshiba Canvio Slim II with read and write speeds of 113.86MB/s and 113.63MB/s respectively

The net of it is, the Backup Slim performed pretty much where it should, given the 5400RPM drive inside. The upshot of course is the 2TB capacity in such a skinny form factor. Given the most likely duty of large file transfers to and from the drive, the sequential file transfer performance will get the job done for most mainstream users.

The Seagate Backup Plus Slim is an impressive portable hard drive for its physical size and capacity. Though Seagate did not quote any performance numbers like it did for the Backup Plus Fast, we were not surprised with the results. The Slim delivered great sequential read and write speeds of 88.6MB/s 119.3MB/s respectively while its random activity boasted transfer rates of 58.7MB/s for read and 95.6MB/s for write. As far as its comparables go, the Seagate Backup Plus Slim couldn’t touch its Backup Plus Fast brethren (which was of course expected) though it did hang right in there with the other LaCie and Toshiba drives in the read performance column and took top spot for write activity in both random and sequential tests.

The Seagate Backup Plus Slim not only performs very well but is also one of the more competitively priced portable drives on the market. For the 2TB model, it Backup Plus Slim goes for roughly only $119 compared to the more premium 2TB Lacie Rugged at $299.99. The Toshiba Canvio Slim II is priced at $149.99 for the 1TB. With the Backup Plus Slim, you will get the same performance (and then some) at a significantly lower cost, especially when going by dollar per GB. It is also very easy to carry along with you on the go and while sturdy, its design and build lacks the ruggedness of other portable drives on the market, so users might want to choose carefully if constant bumps and bruises are expected.

The Seagate Backup Plus Slim has a lot to like, including its great performance, unbeatable price and one of the best bundled software suites for managing backups both locally and on the go.