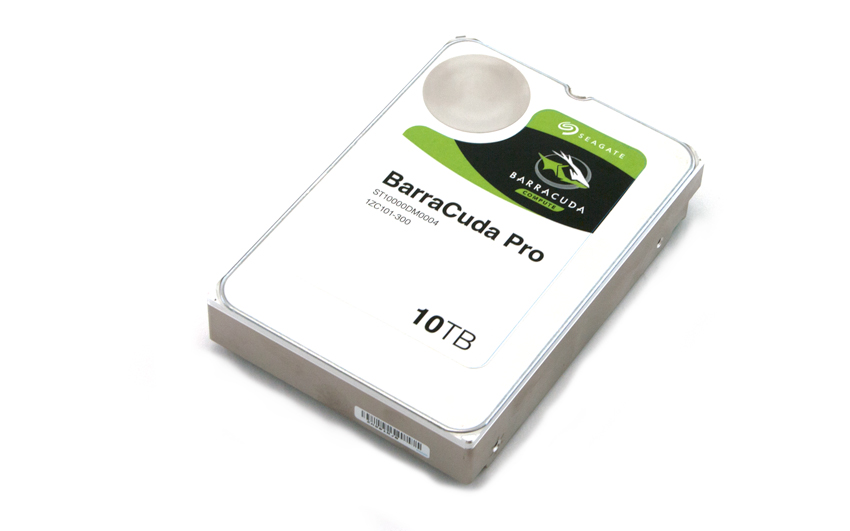 As programs get more complicated and media gets higher and higher resolution, file size will continue to grow. While there are lots of options out there for where to store and use your files as they grow in size there is still a segment of the market that like to keep their files right in the desktop for use and editing. The BarraCuda Pro 10TB is ideal for desktops and all-in-ones, home servers, and for creative professional systems where large files are the norm. Another good use for the drive is for direct attached storage (DAS) either packaged by Seagate or used in a driveless enclosure. 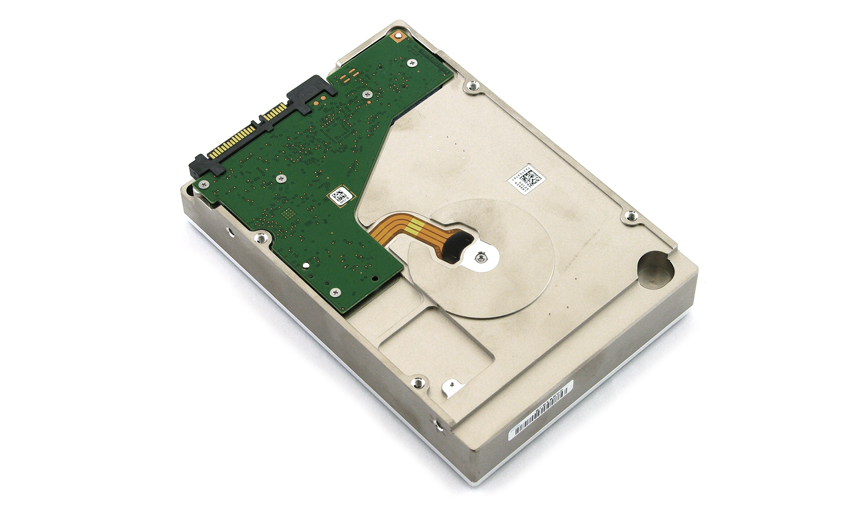 The Seagate BarraCuda Pro 10TB comes with a 5-year limited warranty and a MSRP of $534.99.

All consumer HDD benchmarks are conducted with the StorageReview HP Z620 Workstation. We compared The BarraCuda Pro 10TB with the following drives:

Our first test measures 2MB sequential performance. Here, the BarraCuda come in second behind the WD Black 6TB with 210.70MB/s write and 213.09MB/s read, just slightly behind the WD that had 214.53MB/s read.

Moving to 2MB random transfer performance, the BarraCuda took top spot in write speed with 116MB/s. The BarraCuda read speed came in third overall landing it roughly in the middle of the pack with 68.34MB/s.

Looking at throughput shows the BarraCuda once more taking the top spot in write with 233.53 IOPs and landing in the middle with 61.23 IOPS read.

When looking at 4K write latency (both the average and maximum readings) the BarraCuda took top spot in average latency with only 4.28ms and outperformed all other drives considerably in max latency with 53.34ms. 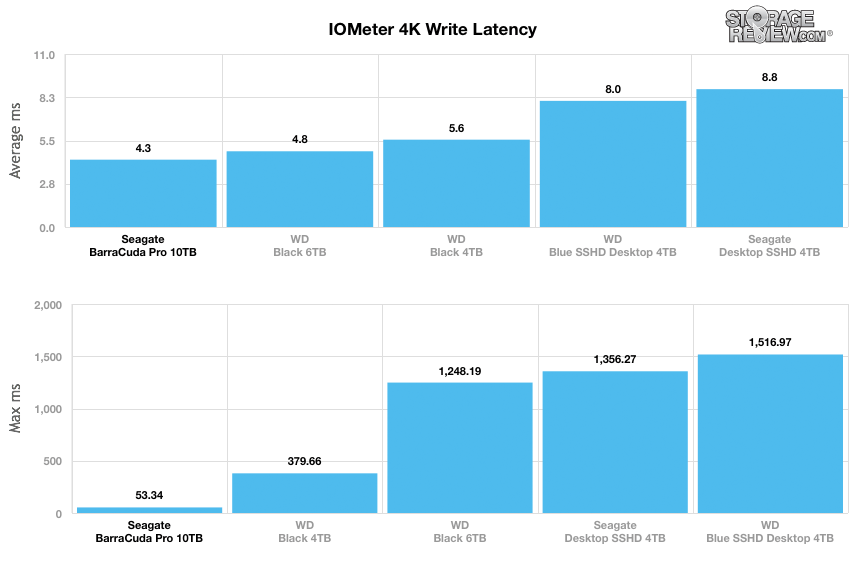 The first is our database profile, which uses a 67% read and 33% write workload mix primarily centered on 8K transfer sizes, shows the BarraCuda starting off strong at 80.35 IOPS and finishing in second with 174.22 IOPS or 11 IOPS under the top performer, the WD Black 6TB. 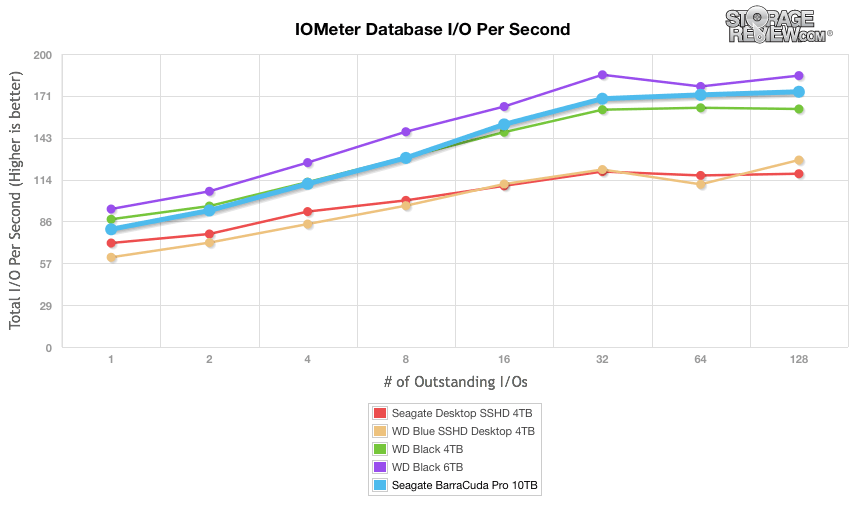 Our web server profile is read-only with a spread of transfer sizes from 512-byte to 512KB. In this scenario, the BarraCuda started out in the middle with 62.15 IOPS and ran in third through most of the test before narrowly eking out a second place finish with 161.73 IOPS. 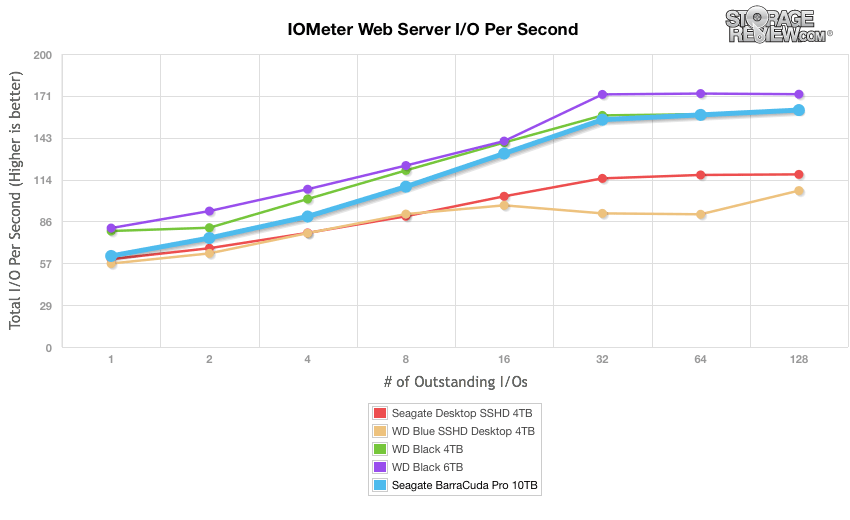 The next profile looks at a file server, with 80% read and 20% write workload spread out over multiple transfer sizes ranging from 512-byte to 64KB. The BarraCuda was able to pull away from the other drives a bit more here and give the WD Black 6TB a run for its money. In the end, the BarraCuda finished second 164.74 IOPS, just under the WD Black 6TB’s 167.05 IOPS. 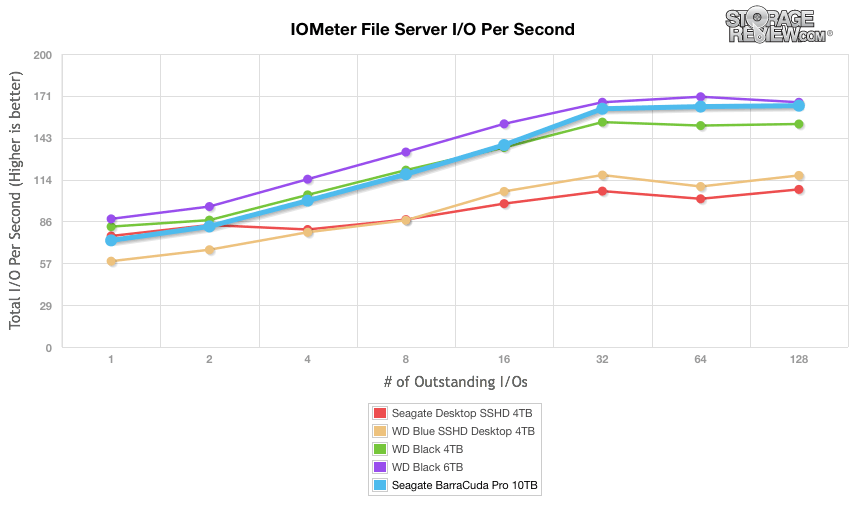 Our last profile looks at workstation activity, which is comprised of a 20% write and 80% read mixture using 8K transfers. Here the BarraCuda held third place from beginning to end in our testing finishing with 162.16 IOPS. 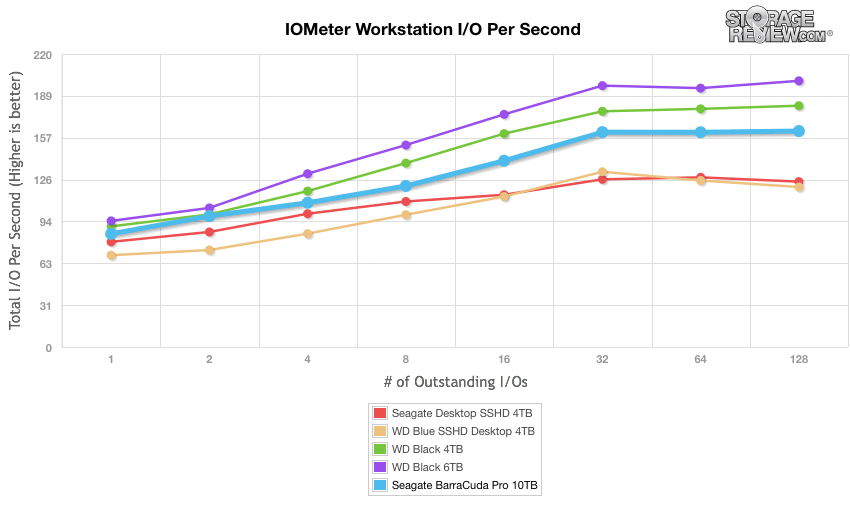 In our HTPC profile, the Seagate BarraCuda really shined. It had the best performance by far in all three metrics tested, not by a small margin either. The BarraCuda gave us a throughput of 1,566.86 IOPS, 116.56MB/s transfer speeds, and 5ms. 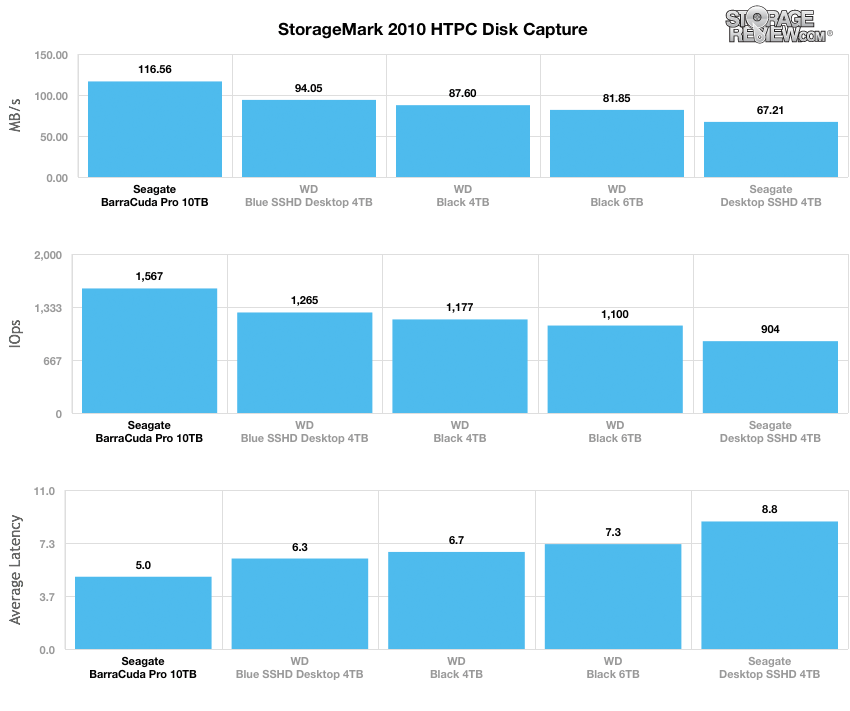 Our second real-life test covers disk activity in a gaming environment. Unlike the HTPC trace, this one relies heavily on the read performance of a drive. To give a simple breakdown of read/write percentages, the HTPC test is 64% write, 36% read, the Productivity test is 59% write and 41% read, while the gaming trace is 6% write and 94% read. The test consists of a Windows 7 Ultimate 64-bit system pre-configured with Steam, with Grand Theft Auto 4, Left 4 Dead 2, and Mass Effect 2 already downloaded and installed. The trace captures the heavy read activity of each game loading from the start, as well as textures as the game progresses. In this trace we recorded 426MB being written to the drive and 7,235MB being read.

In our read-intensive Gaming trace, the BarraCuda gave us moderate to average performance with 1,040.94 IOPS, 55.89MB/s, and average latency of 7.64ms. 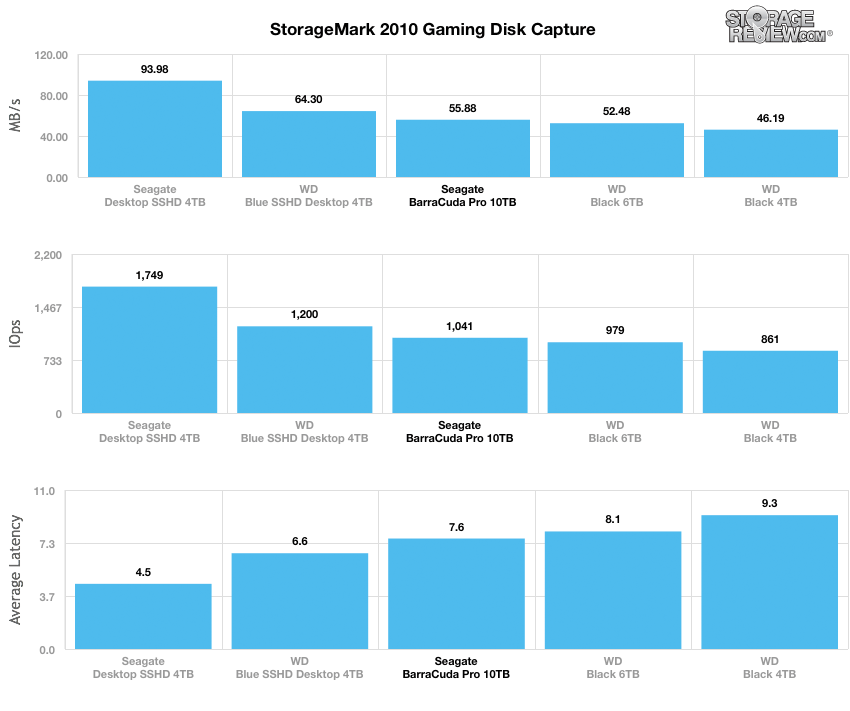 The Seagate BarraCuda Pro is part of the company’s new Guardian series of 10TB drives. The BarraCuda spins at 7200 RPM and a large cache to bring higher performance along with the higher capacity. The drive only uses 6.8W while in use making it one of the more efficient HDDs on the market. Users that need high capacity in their desktop, home server, or DAS can take advantage of the BarraCuda Pro’s 10TB capacity or creative professionals that need more capacity in their system. And the drive is cost-effective considering its capacity at rough $540 for 10TB or $54/TB at launch.

Looking at performance, The Seagate BarraCuda Pro 10TB showed surprisingly strong performance in several of our benchmarks, though it did tend to favor write performance. The BarraCuda was able to hit speeds of 210.70MB/s write and 213.09MB/s read in our sequential 2MB IOmeter benchmark as well as taking the top spot for random 2MB IOmeter writes with 116MB/s. Our 4k Iometer tests continued to show strong write performance with 0.91MB/s random transfer, 233 IOPS throughput, and an average latency of 4.28ms. The drive really impressed in max 4k IOmeter latency with only 53.34ms, significantly less than the other drives tested. The BarraCuda performed well in our mixed workload profiles placing in the top two spots throughout the testing. In our HTPC trace, the BarraCuda lead the pack against hard drives and desktop hybrid models, although slipped behind the hybrids in our Gaming trace.

The Seagate BarraCuda Pro 10TB is the largest desktop hard drive available that comes with strong performance in several categories, but tends to favor writes.