The Seagate Business Storage Windows Server 4-Bay NAS is configurable in capacities up to 16TB and as the name implies features the Windows Storage Server 2012 operating system. The Windows software gives Seagate an alternative offering to their other NAS products that leverage Seagate’s own operating layer on top of Linux, making this particular NAS an easy plug and play option for small offices and branch offices that rely on a Windows IT environment that rely on key features like Active Directory.

The Seagate Business Storage Windows Server 4-Bay NAS is configurable in capacities up to 16TB and as the name implies features the Windows Storage Server 2012 operating system. The Windows software gives Seagate an alternative offering to their other NAS products that leverage Seagate’s own operating layer on top of Linux, making this particular NAS an easy plug and play option for small offices and branch offices that rely on a Windows IT environment that rely on key features like Active Directory. 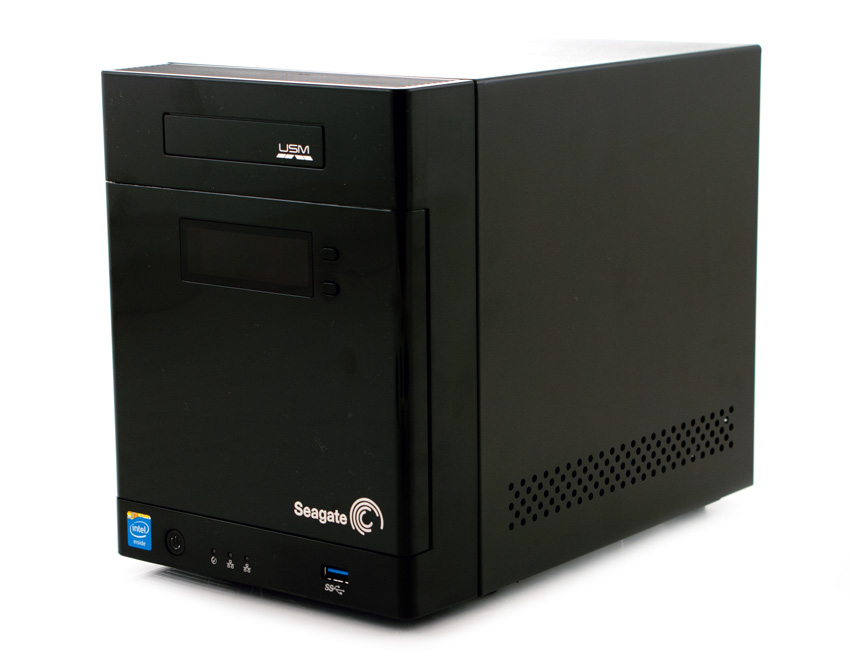 The Windows Server 4-bay NAS is ideal for small businesses that want to expand their current network while utilizing their current Windows IT infrastructure (if a small business was looking to centralize their storage they may look into the regular Seagate 4-Bay NAS instead). The device comes with Bitlocker encryption, Windows Storage Server 2012 Workgroup OS, and several external ports for fast file backups, boot drives, and additional capacity through the USM slot. With file transfer speeds up to 200MB/s, the Seagate Business Storage Windows Server 4-Bay NAS will add high performance and capacity to an already existing Windows Server.

The Seagate Business Storage Windows Server 4-Bay NAS looks identical to the non Windows Server version and like a wider version of the Business 2-Bay NAS. On the front of the device, near the bottom and going from left to right, is the power button, three LED Lights indicating power, and the other two indicate if the network is connected. Near the bottom right hand side is a USB 3.0 port. In the middle of the device is an LED status screen and above that is a USM port. For those unaccustomed, the USM port allows for Seagate branded external drives to be slotted into the port. This gives users another option for backups or movement of large amounts of data when going over the network is less ideal. 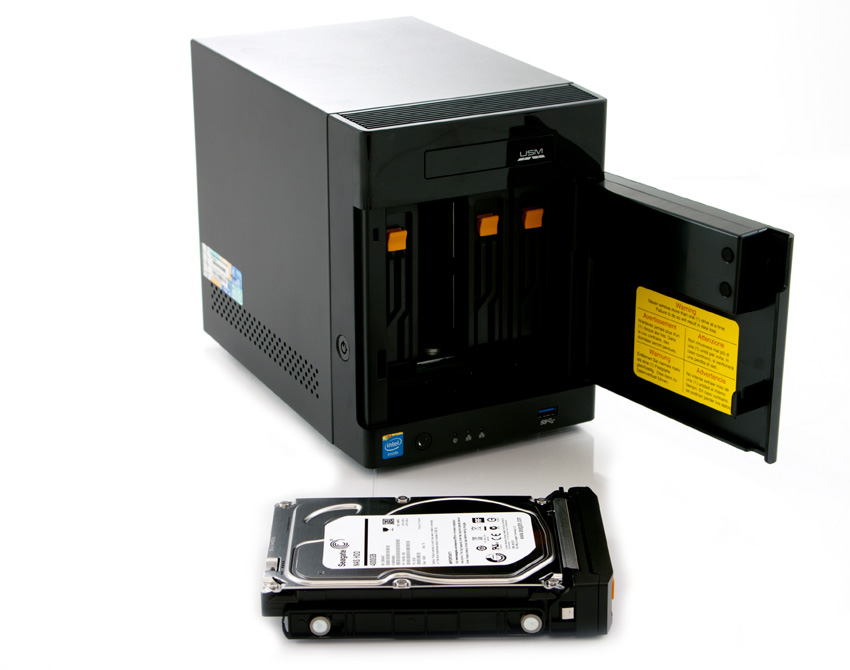 In order to swap out the bays all one has to do is open up the front panel on the left, pull one of the orange latches on top, and slide out the tray containing the HDD. Put a new one in and snap it back in place. 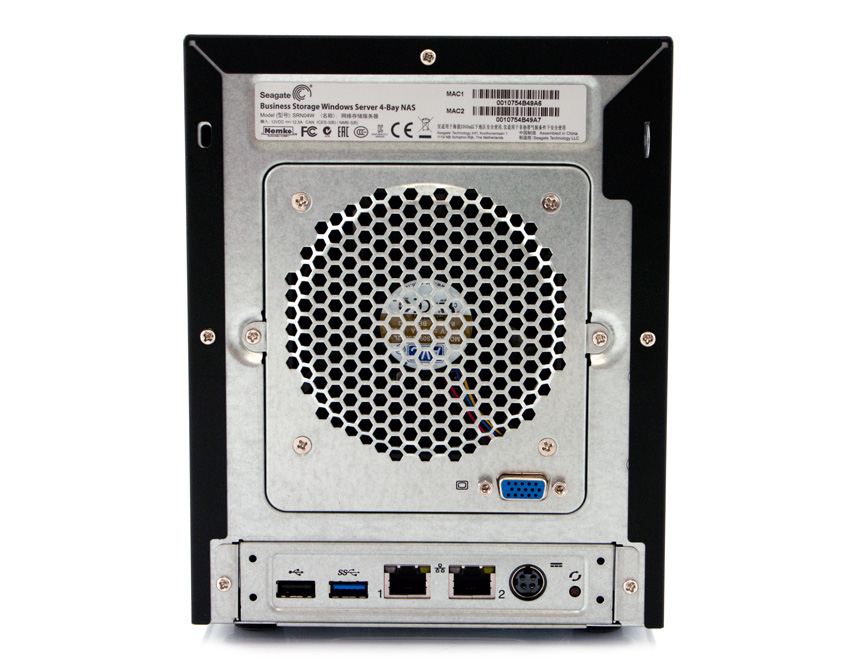 The rear of the device features the cooling fan and going from left to right: a USB 2.0 port, a USB 3.0 port, 2 gigabit ports, and the power connection.

The Seagate Business Storage Windows Server NAS as the name implies leverages Windows Storage Server 2012 Essentials for all its file server duties. From a low level this means that most user interaction takes place through a remote desktop session and storage settings such as RAID is managed through Windows Storage Spaces. This brings with it a very powerful feature set, which can be incredibly useful in a business setting; especially those with little in-house IT staff. 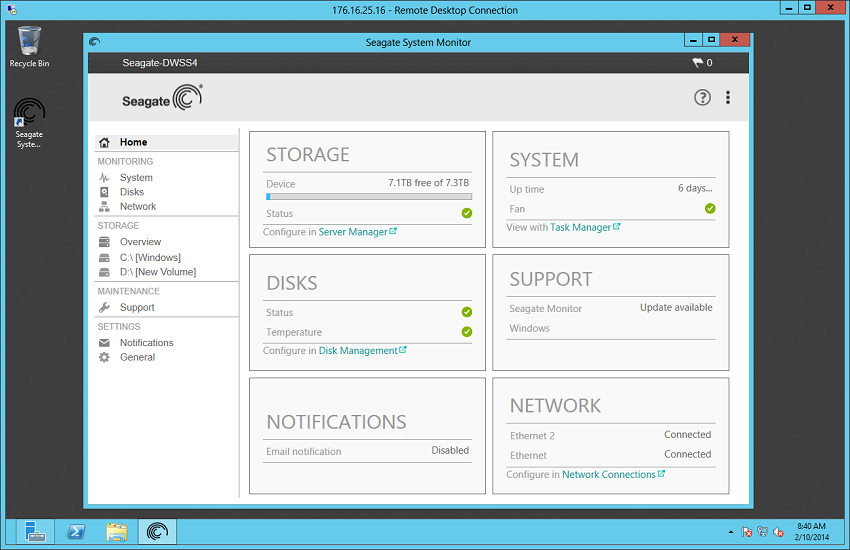 Seagate provides a basic monitoring app that integrates with the Windows-backend to keeping up to date on basic information. Instead of having to open Task Manager for example, you can look at the System tab to check processor and RAM utilization. 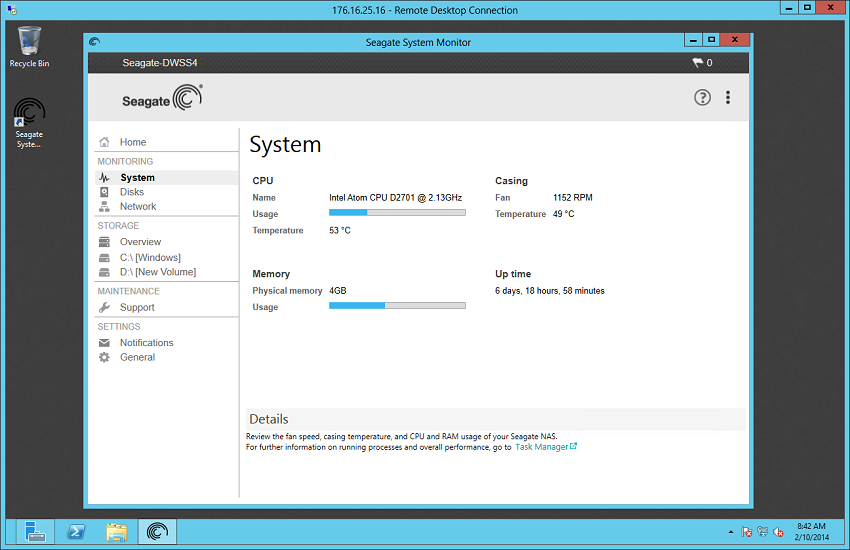 For gathering network information, the Network tab provides a good overview, although all settings are managed through their standard Windows control panels. 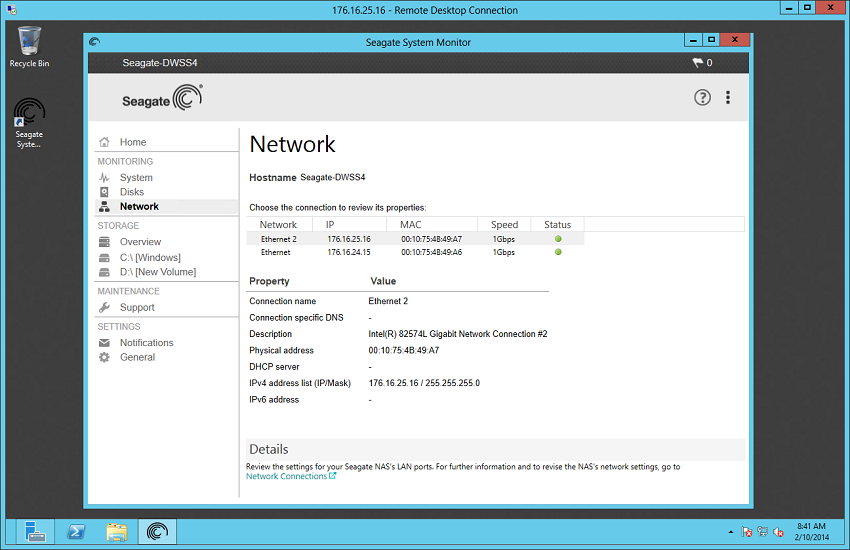 When creating a new SMB3, NFS or iSCSI share, users need to transition into the Server Manager interface that is built into Server 2012. For the Seagate Business Storage Windows Server 4-Bay NAS we tested both SMB AND iSCSI protocols for the four included Seagate NAS HDD drives. We used both Mirroring and Parity redundancy tests to see how the NAS performed under various configurations.

Our analysis of the Seagate Business Storage Windows Server 4-Bay NAS includes four profiles comparable to our past enterprise storage benchmarks and widely-published values such as max 4k read and write speed and 8k 70/30, which are also commonly used in manufacturer specifications and benchmarks.

The first in our series of benchmarks measures 4K performance at 100% read 100% write activity. The SMB performance with the drives in a parity configuration was the top performer with 1,063 IOPS read activity although mirror came in higher for write speeds measuring 116 IOPS. The iSCSI results for both mode wasn’t far behind.

In our main average latency segment with a load of 16T/16Q, again the SMB came out on top only flipped from the previous test with the Mirror having the lowest average write latency at 2,195.94ms and the Parity having the best read speed at 240.6ms.

With max latency, the Mirror iSCSI had no competition pulling out speeds of 5,368ms write and 1,278ms read. While the Parity iSCSI had a close read speed all the rest fell way behind.

Standard deviation showed us more of the same as the above test. The Mirror iSCSI blew the others out of the water with a write speed of 626.56ms and a read speed of 101.11ms. Again the Parity iSCSI had comparable read speeds but all others were much higher.

Our next benchmark measures 100% 8K sequential throughput with a 16T/16Q load in 100% read and 100% write operations. The Parity iSCSI had the greatest throughput over all with 12,903 IOPS read activity and 2,231 IOPS write activity. It was trailed by the Parity SMB.

Compared to the fixed 16 thread, 16 queue max workload we performed in the 100% 4k and 8k write tests, our mixed workload profiles scale the performance across a wide range of thread/queue combinations. In these tests, we span workload intensity from 2 threads and 2 queue up to 16 threads and 16 queue. In the expanded 8k 70/30 test, both the Mirror SMB and the Mirror iSCSI ran with higher activity throughout with the Mirror iSCSI pulling ahead in the lower queue depths with an activity of 290 IOPS. Both of Mirror tests ran with about twice as much activity as the Parity tests. 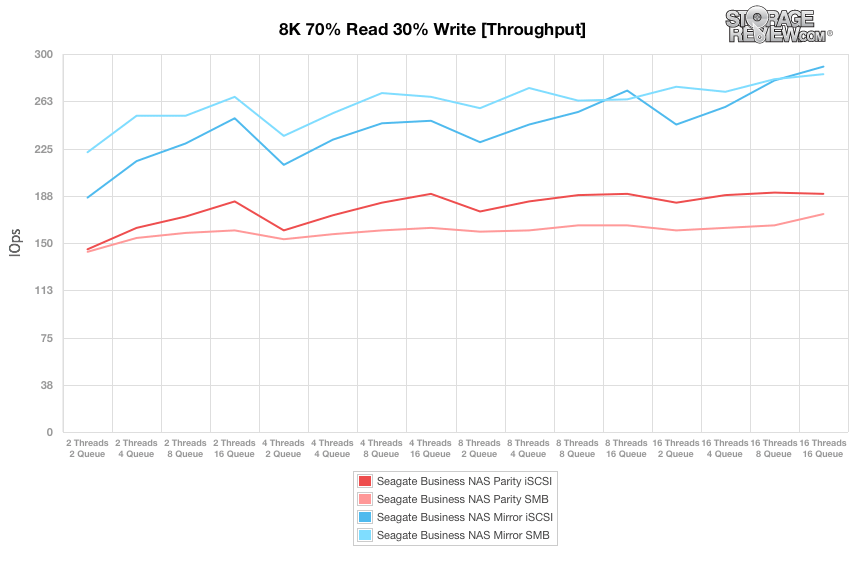 With the 8k 70/30 average response times, again the Mirror tests out performed the parity tests. Both Mirror tests trading low spots back and forth though the SMB overall had a lower average speed it did peak at 892.43ms while the iSCSI peaked at 881.16ms. 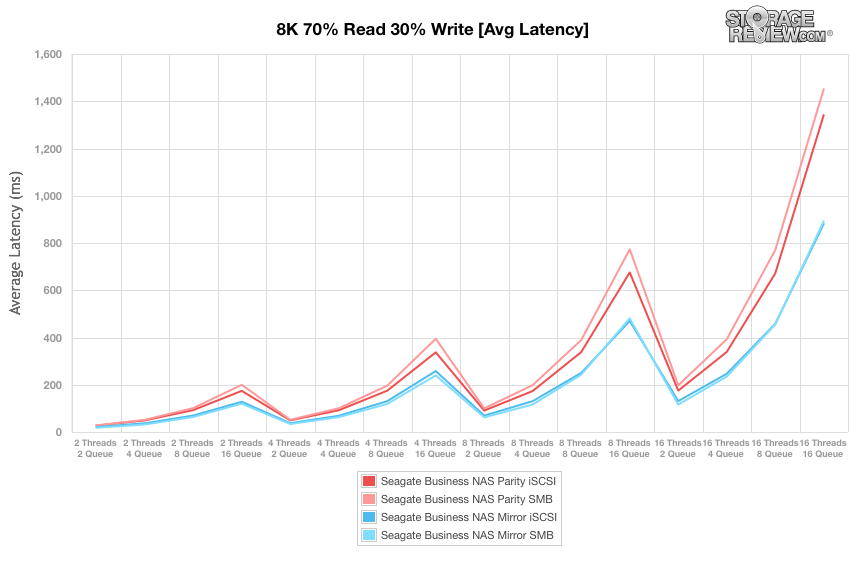 Over the duration of our primary tests at varying thread and queue depth levels, the iSCSI protocols had a lower max latency throughout. The Parity iSCSI peaked higher at lower queue depths, but ran lower throughout. With standard deviation both Parity tests run lower than the Mirror. At lower queue depths the iSCSI remained lower than the rest and the Parity SMB started to climb. 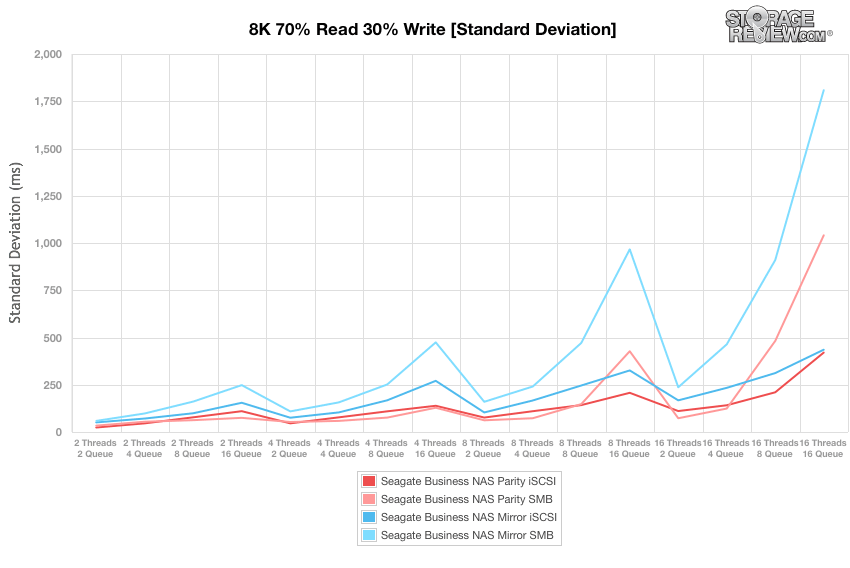 The last test in our Enterprise Synthetic Workload testing is the 128k test which is a large block sequential test that shows the highest sequential transfer speed for a platter drive. Looking at the 128k performance of 100% write and 100% read activity, the Parity iSCSI had the highest activity with 231MB/s read and 39.7MB/s write.

The Seagate Business Storage Windows Server 4-Bay NAS is ideal for expanding currently existing Windows IT infrastructure. The device has a scalable capacity from 4TB to 16TB using 4 hot-swappable drives. Running Windows Storage Server 2012 Essentials, businesses will be able to seamlessly integrate the Windows Server 4-Bay NAS. With USB 3.0, USB 2.0 ports, and a USM slot, users have quite a bit of flexibility when it comes to transferring data to the server or off of the server for local backups.

We measured both SMB and iSCSI protocols using Mirroring and Parity storage pool configurations to show how well the NAS performs with both sequential and random access. The Seagate Business Storage Windows Server 4-Bay NAS offered 4k throughput of 1,063 IOPS read activity (in parity) and 116 IOPS write (in mirror) with a heavy 16T/16Q load. With 8k transfers with a sequential load we saw throughput jump to a peak of just over 12k IOPS read and 2.2k IOPS write in parity over iSCSI. Large-block transfers offered strong read performance measuring over 231MB/s, although write performance lagged at just 39MB/s peak. While the Windows Storage Server 2012 OS offers a lot of features and capabilities compared to a Linux-based NAS, that comes at a cost of being more resource intensive.

Overall though, for Windows IT shops there aren’t many small NAS options that offer the easy deployment and management model Windows Storage Server offers. To Seagate’s credit, they’ve leveraged an attractive hardware design that has plenty of expansion and accessibility options to address the needs of small professional offices, branch/remote offices and retail outlets that require reliable local storage. While the system may be underpowered compared to Linux-based offerings, the focus here is more about integration with Windows environments and the Business Storage Windows Server does so with ease.

The Seagate Business Storage Windows Server 4-Bay NAS will bring ease of use and high capacity to an already existing Windows IT infrastructure for an affordable price.