The Seagate Desktop HDD.15 is a 3.5" form factor, 6Gb/s SATA interface drive with a unique spindle speed of 5,900RPM that hits the 4TB capacity mark and is explicitly designed for desktop implementation. Building on their 3TB Barracuda drive (now rebranded HDD.14), the Desktop HDD.15 uses Seagate’s 1TB platters inside. Thanks to the slower spindle speed, Seagate has been able to drive down power consumption on the Desktop HDD.15 to an average of 7.5W, an idle rating of 5W, and standup and sleep mode ratings of just 0.75W.

The Seagate Desktop HDD.15 is a 3.5" form factor, 6Gb/s SATA interface drive with a unique spindle speed of 5,900RPM that hits the 4TB capacity mark and is explicitly designed for desktop implementation. Building on their 3TB Barracuda drive (now rebranded HDD.14), the Desktop HDD.15 uses Seagate’s 1TB platters inside. Thanks to the slower spindle speed, Seagate has been able to drive down power consumption on the Desktop HDD.15 to an average of 7.5W, an idle rating of 5W, and standup and sleep mode ratings of just 0.75W. 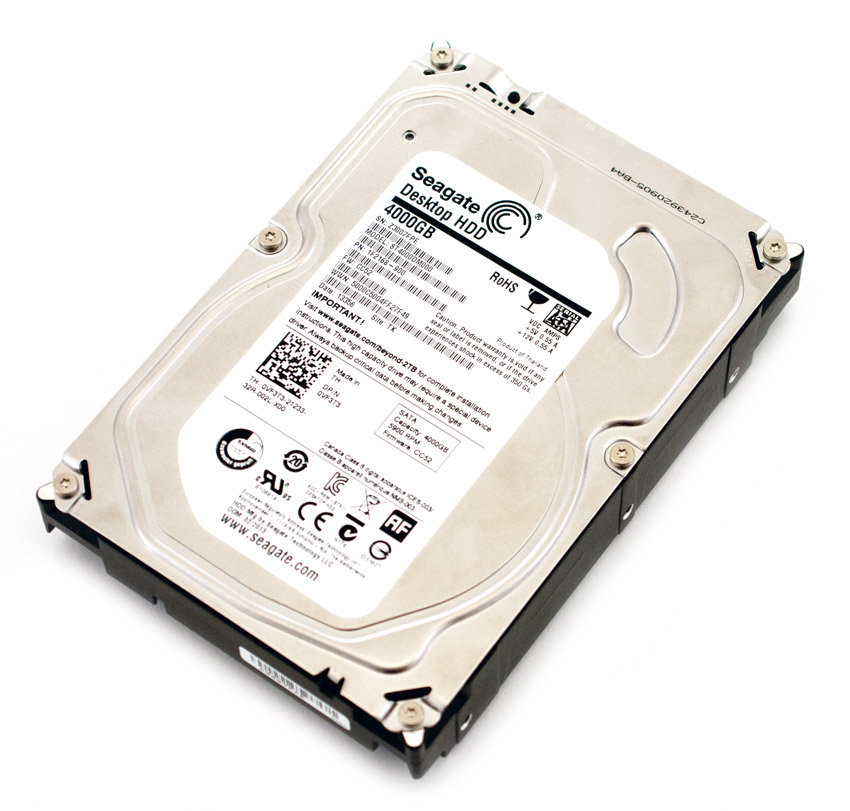 With a market inundated by a range of HDD offerings, Seagate’s aim here is to provide users with a reliable, low power-consumption drive that still provides satisfactory performance levels. The drive isn’t geared to enthusiast users looking for maximum performance; its target is those users who require the most robust capacity available from a reliable maker that still features enough potency to handle a wide range of workloads. On that note, the Desktop HDD provides up to 180MB/s of sustained throughput, with 146MB/s average data rate and an average latency of 5.16ms. Those quoted figures are pretty impressive given the drive’s 5,900 RPM spindle speed and thanks in large part to Seagate’s improvements in cache management that the company claims are better by a 45% margin. Of course for those who want faster performance in a desktop drive, Seagate offers a 2TB solid state hybrid drive (SSHD), which couples onboard NAND to drive faster throughput, up to 190MB/s second when hitting the caching NAND.

Seagate added some other features to the Desktop HDD.15 to smooth out users’ transition experience. For instance, users with legacy BIOS or Windows XP users are typically limited to 2TB drives without updating from the native BIOS to UEFI. Seagate’s free DiscWizard software enables those users to still utilize their 4TB Desktop HDD. Adding on to the power quotes for a "greener" drive, Seagate says the Desktop HDDs utilize at least 70% or more of recyclable materials. As to how the company achieved the 1TB platter mark, Seagate used their AcuTrac technology to enable accurate reads and writes to tracks that are just 75nm wide.

The Seagate Desktop HDD (current generation) ships in a single 4TB capacity with a two year warranty. Street pricing is around $180 at the time of this review.

The Seagate Desktop HDD features the simple standard hard drive design that Seagate implemented on the Seagate Barracuda (Desktop HDD.14). The top cover is silver while the body of the drive is black metal. The top cover features relevant product information on a label that includes capacity, model number, spindle speed, etc.

The side profile of the Seagate Desktop HDD shows the six screw holes (three per side) that enable users to mount the drive easily. On the rear of the drive are power and SATA connectors. 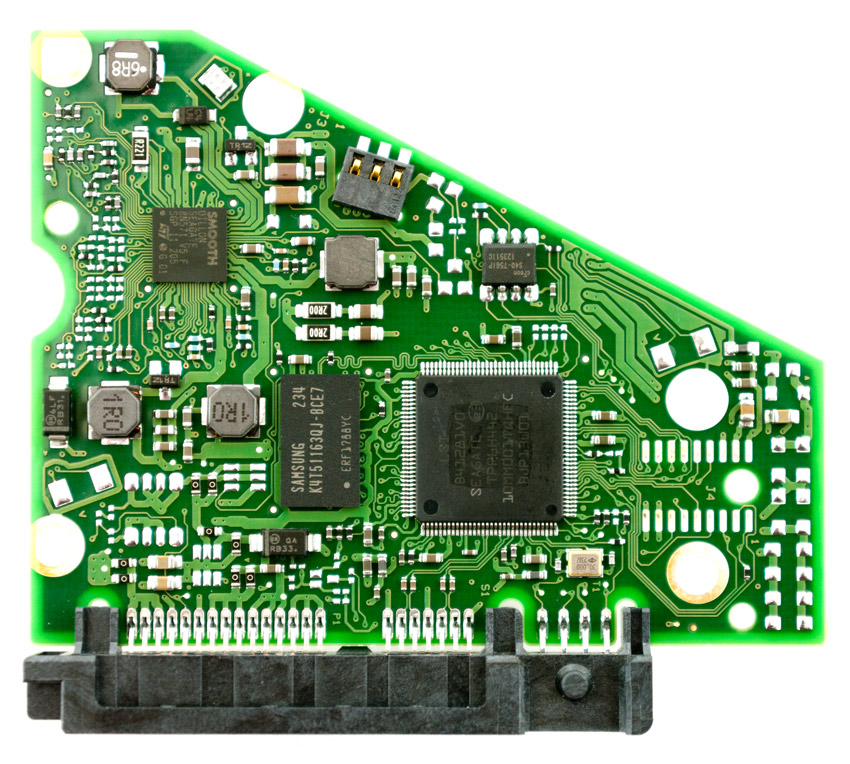 To disassemble the Desktop HDD, we removed five small screws to take the circuit board off the drive’s body. The circuit board features an LSI 841281V0 controller and 64MB of cache from the Samsung K4T51163QJ-BCE7 DRAM. Internally, there are four platters at 1TB each.

In our first workload we look at the performance of each 4TB hard drive with a 100% random 4K write or 100% 4K read workload. In this test the Seagate HDD.15 trailed the Hitachi 7K4000 and WD Black with transfer speeds measuring 81 IOPS read and 117 IOPS write.

Comparing max latency, the Seagate HDD.15 came in bottom-middle of the pack, with a peak write latency of 5,907ms and a peak read latency of 5,514ms.

Comparing 4K read and write latency standard deviation, the Seagate HDD.15 had trailed with less latency consistency than the 7,200RPM comparables in this group.

Switching to our 8K 70/30 mixed workload, we measure performance from a low load of 2T/2Q (QD4 effective) up to 16T/16Q (QD256 effective). In this setting the Seagate HDD.15 came in towards the middle of the pack, but trailed behind the Hitachi Deskstar 7K4000 by a large amount. One of the bigger differences is the Deskstar saw a larger boost as queue depth increased per thread-count, where the 4TB HDD.15, 4TB Black and 4TB Barracuda plateaued. 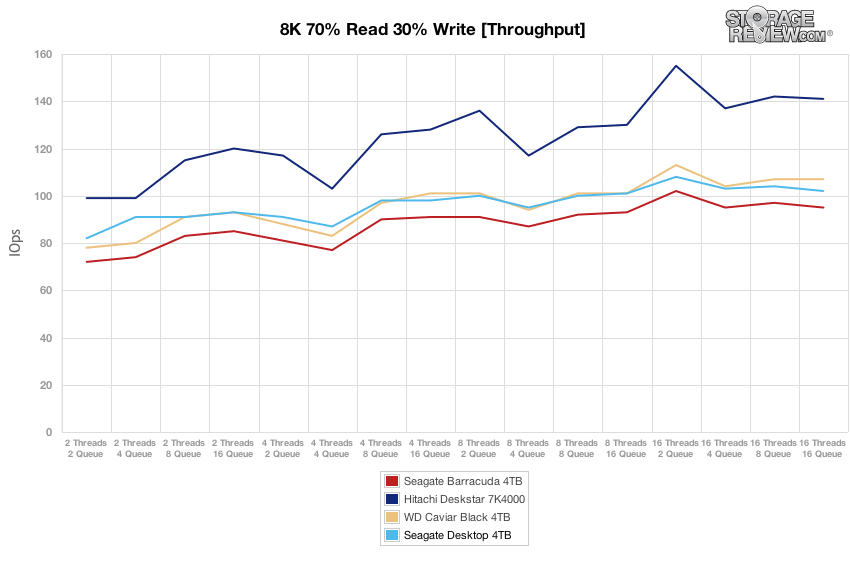 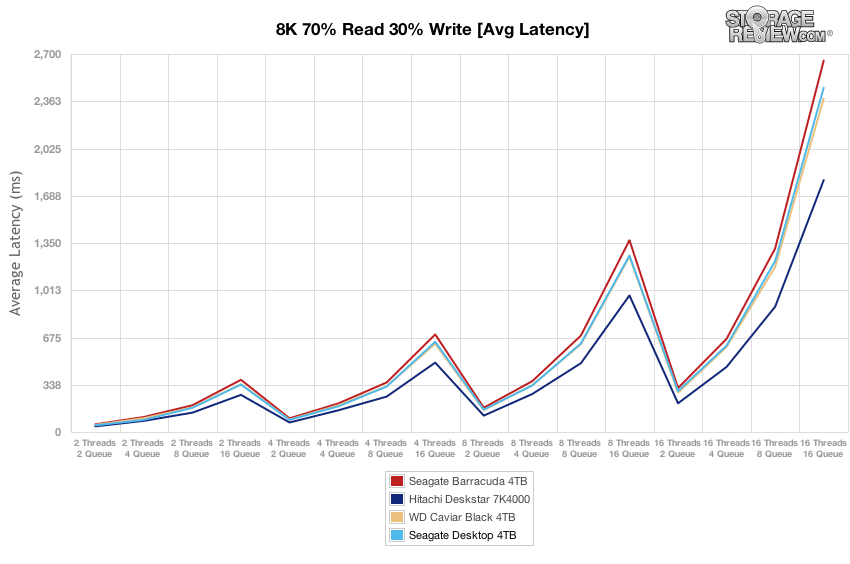 Comparing max latency between each 4TB hard drive, the Seagate HDD.15 had lower peak response times than most over the duration of the test which got magnified as the queue depth increased. 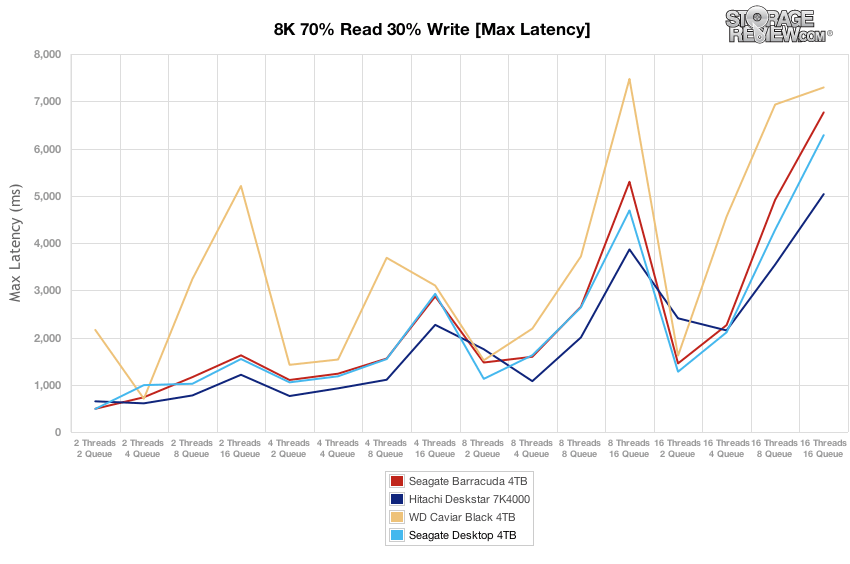 With lower peak response times than most in our 8K 70/30 workload, it also had slightly better latency consistency, but still ranked below the Hitachi Deskstar 7K4000. 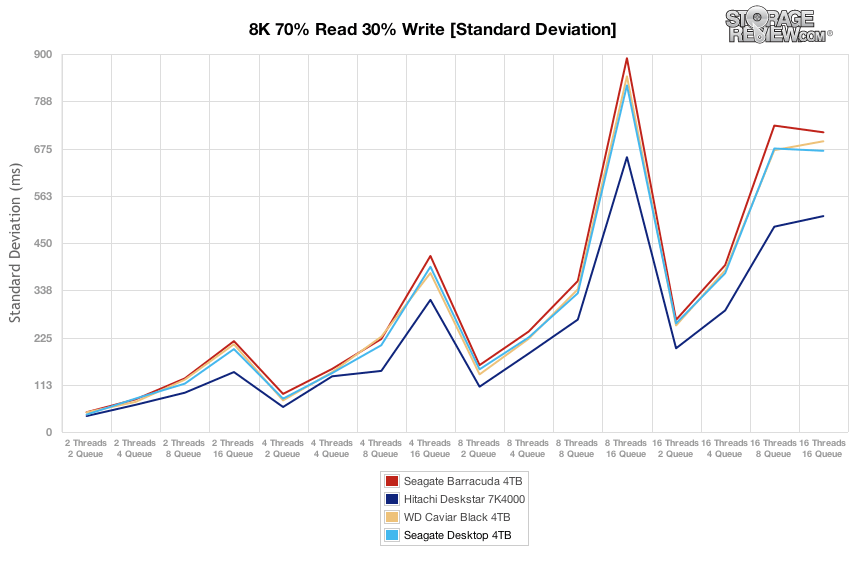 Our next mixed workload measures the performance of each hard drive in our traditional File Server profile with a transfer size ranging from 512b to 64K. Over the most of the range in thread/queue loads the 4TB Seagate HDD.15 lagged towards the bottom of the group. Performance from the Seagate HDD.15 scaled from 68 IOPS at 2T/2Q to 81 IOPS at 16T/16Q, versus the 7K4000 which scaled from 82 IOPS to 102 IOPS. 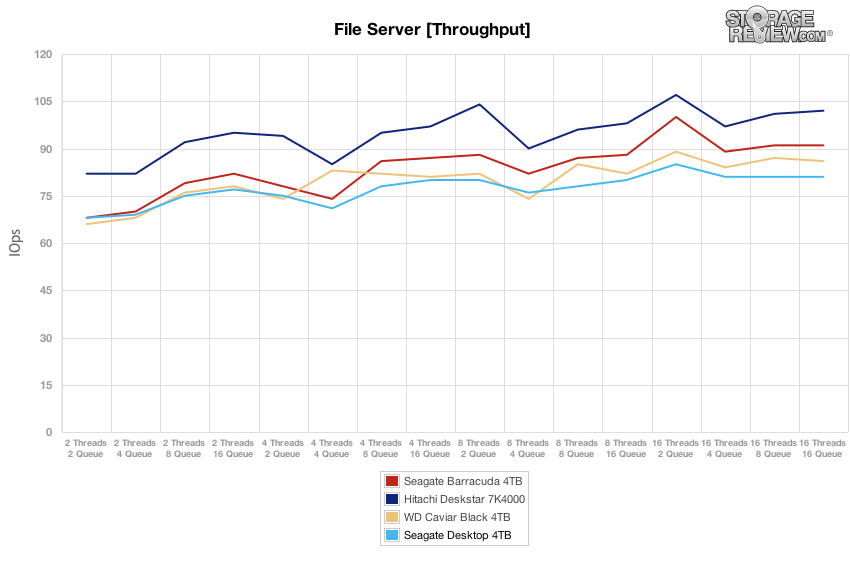 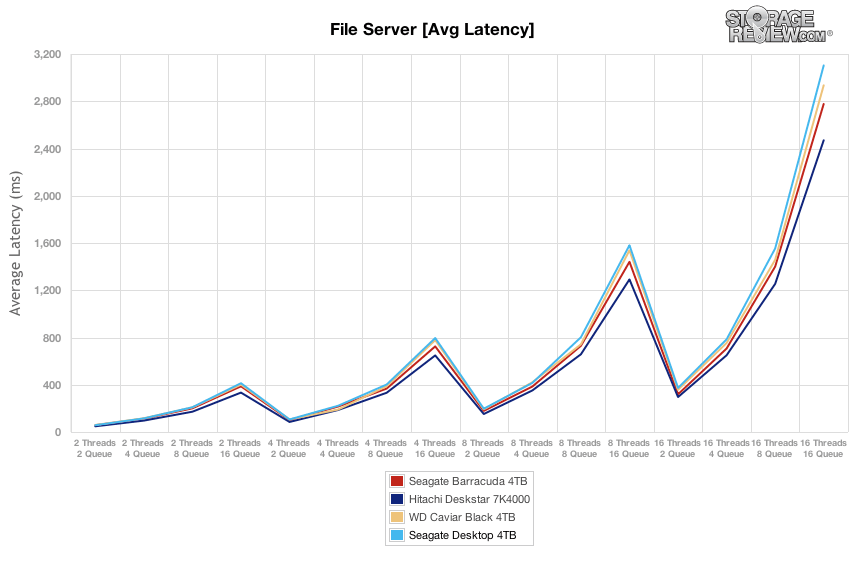 Across the spectrum of applied loads, the Seagate HDD.15 was able to suppress its peak response times better than the WD Black, which had the highest peak latency in the group. This compared to the Hitachi 7K4000 that kept it better managed in this particular workload. 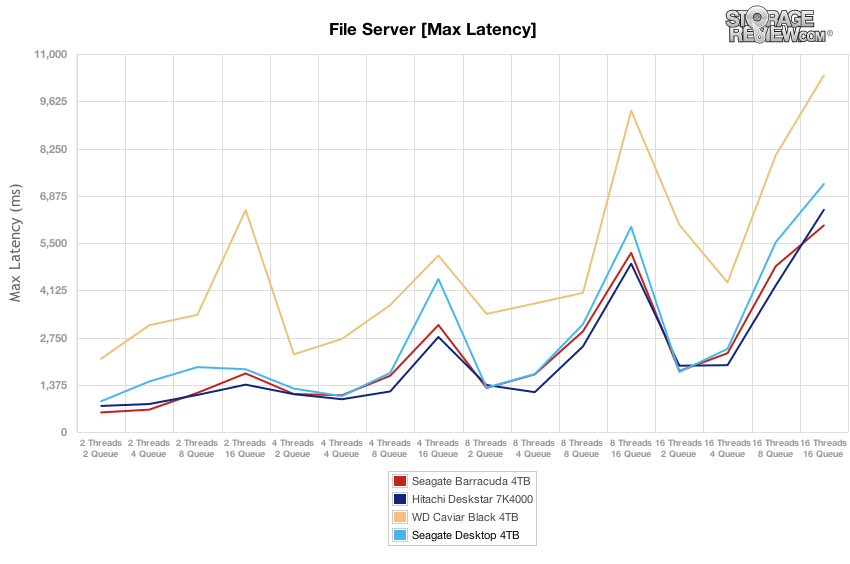 Switching our view to latency consistency in our File Server workload, the Seagate HDD.15 came in at the lower middle of consumer 4TB hard drive pack. 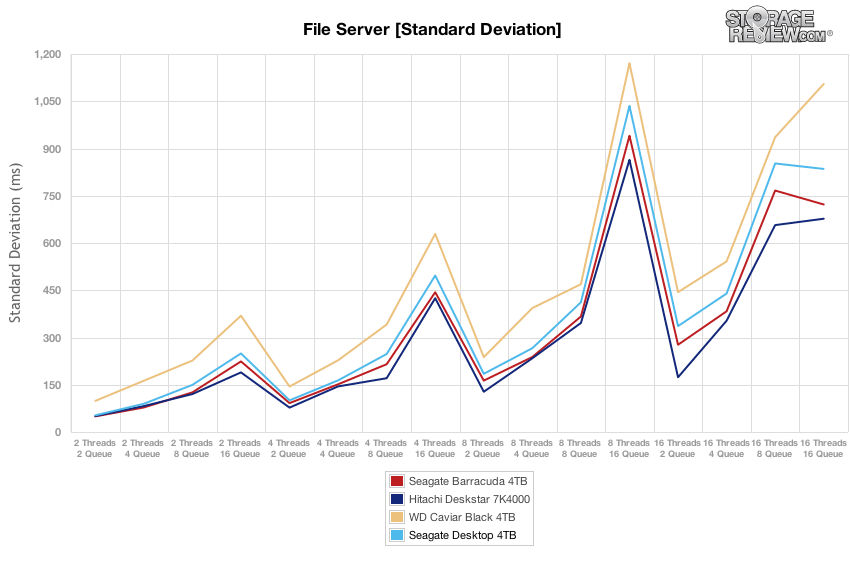 Our last mixed workload measures performance in our Web Server profile, which includes transfer sizes of 512b to 512K in a completely read-only pattern. With this 100% read activity, the 4TB Seagate HDD.15 came in above the middle of the pack, with transfer speeds ranging from 74 IOPS at 2T/2Q to 88 IOPS at 16T/16Q, whereas the Hitachi Deskstar 7K4000 which led the pack scaled from 88 IOPS to 112 IOPS. 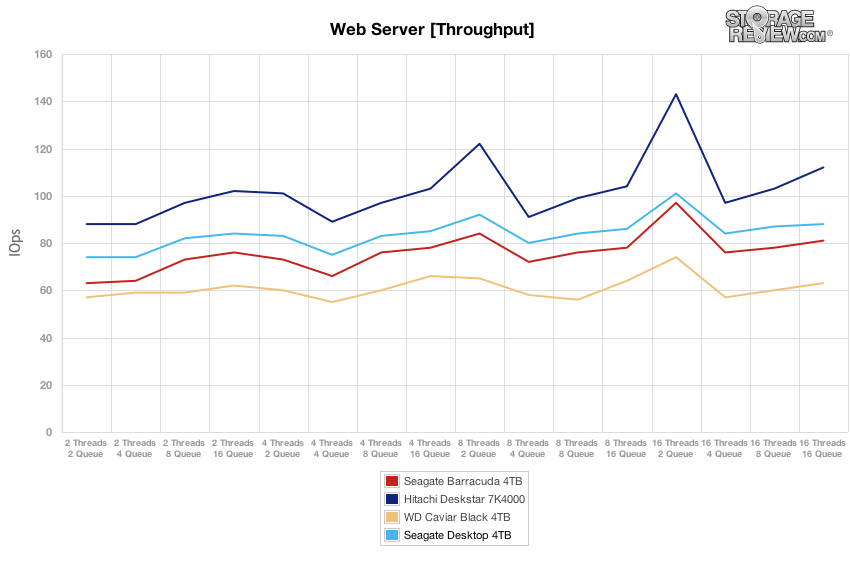 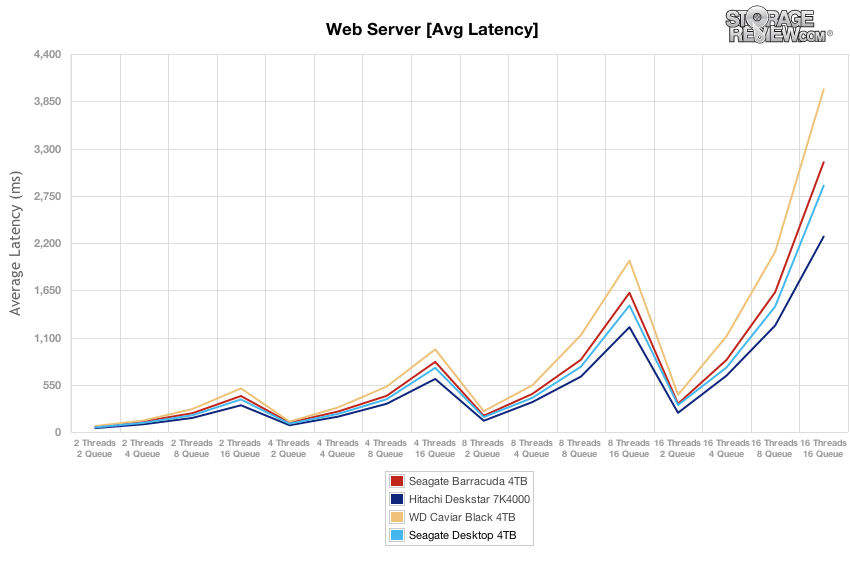 Looking at max latency in our Web Server profile, we saw a similar trend from the Seagate HDD.15 that we saw in our previous two mixed workloads, coming in grouped between the Barracuda 4TB and Hitachi 7K4000. 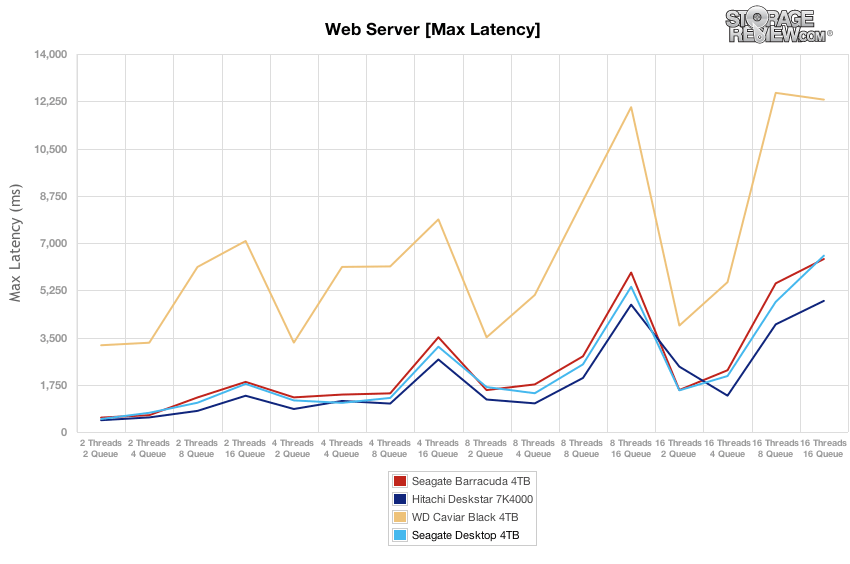 The Seagate HDD.15 maintained its good performance in terms of latency in our standard deviation test, with latency consistency ranked towards the upper middle of the pack in our Web Server profile. 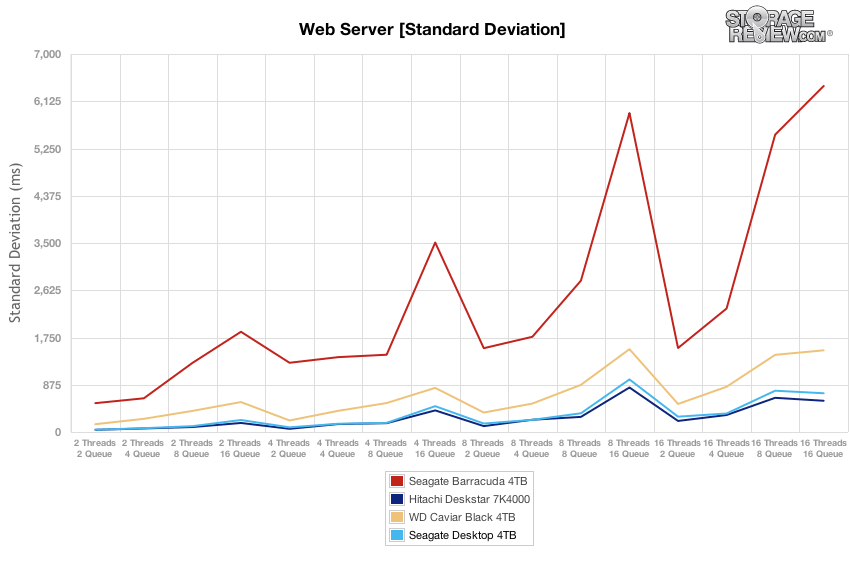 The Seagate Desktop HDD ships in a 4TB capacity and is the company’s updated offering in what has been known as their Barracuda line. Dubbed with generation-specific branding, the Desktop HDD.15 provides users with a low power consumption option, as quoted power figures hit just 5W in typical idle operation and 7.5W for an overall average. Beyond that, the drive features 180MB/s of sustained throughput and 5.16ms for an average latency response time. The power and performance figures are achieved by Seagate’s implementation of a 5,900 RPM spindle speed, versus the more commonly appropriated 7,200 RPM speed.

The 5,900 RPM speed selection means that the Seagate Desktop HDD will be a reliable performer that doesn’t rack up energy costs. While its target users aren’t those looking for the most explosive performance, that criterion is still significant to some consumers. In our tests we found the 4TB Seagate HDD.15 perform surprisingly well in the group of other 7,200RPM hard drives, with the exception of the Hitachi 7K4000 that dominated the group. In mixed workloads the HDD.15 frequently fell into the middle of the pack and sequential read transfer performance came in about 15MB/s below the class leader. With more desktops switching toward flash for boot drives and hosting applications, the demand for faster bulk storage is starting to lean towards lower cost or greater power savings being the big driving factors. In that category, a slightly slower 5,900RPM drive that meets most of the performance requirements can start to compete with 7,200RPM models when it comes to total cost of ownership.