Seagate continues to expand the capacity of their HDDs with the launch of the Exos X16 family earlier this year. As the second name implies, the capacity of these drives runs up to 16TB. The massive capacity in a 3.5” form factor can supply up to 33% more petabytes per rack, compared to 12TB drives. This would make the Exos X16 an ideal choice for hyperscale applications/cloud data centers, scale-out data centers, Big Data applications, and distributed files systems such as Hadoop and Ceph. The drives also have a 14TB version available.

Seagate continues to expand the capacity of their HDDs with the launch of the Exos X16 family earlier this year. As the second name implies, the capacity of these drives runs up to 16TB. The massive capacity in a 3.5” form factor can supply up to 33% more petabytes per rack, compared to 12TB drives. This would make the Exos X16 an ideal choice for hyperscale applications/cloud data centers, scale-out data centers, Big Data applications, and distributed files systems such as Hadoop and Ceph. The drives also have a 14TB version available. 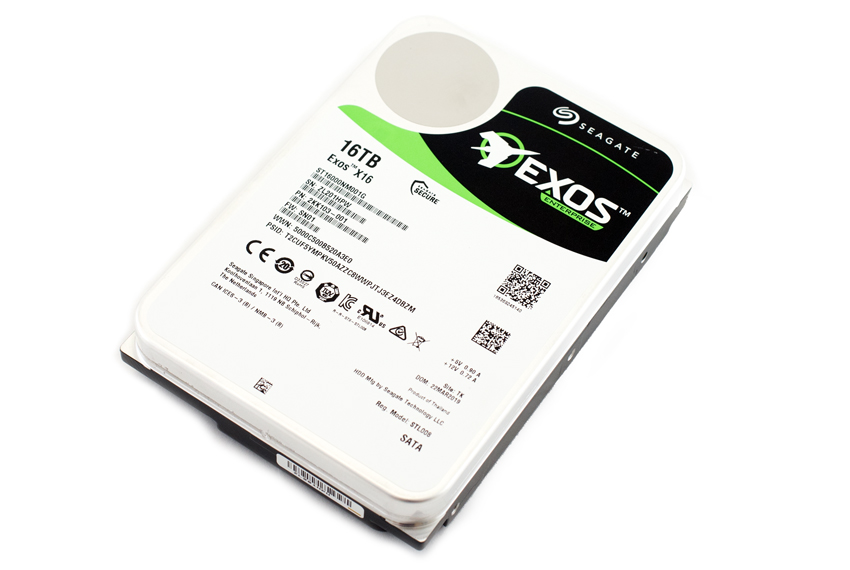 The Exos are helium sealed that can lower TCO by reducing power needs and weight. The drive comes in both SATA and SAS interfaces and in Standard and SED models. Seagate claims the highest 16TB HDD performance as well, but being as there are so few, that very well may be true. The drives have digital environmental sensors to monitor internal conditions and come with Seagate Secure for added data security. 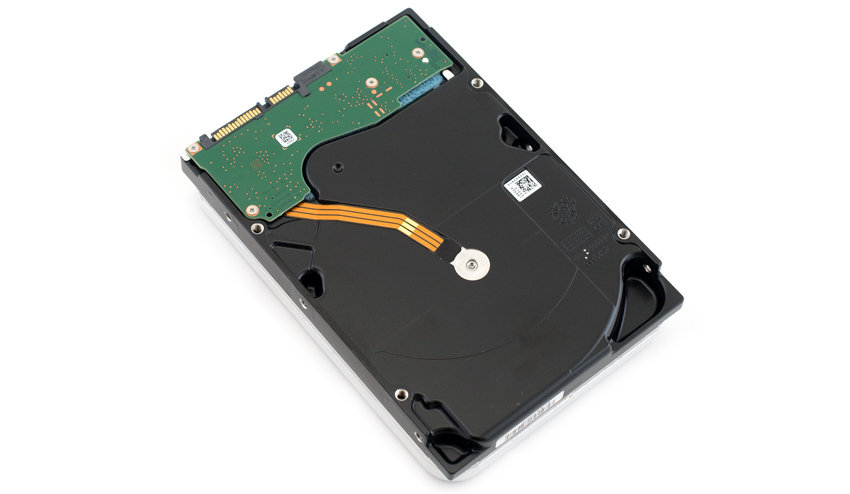 The Drives come with a 5-year limited warranty and an MTBF of 2.5 million hours.

In the following section of this review, we will show the 16TB Seagate Exos’s performance in both iSCSI and CIFS configurations compared to the 14TB and 14TB Ironwolf models as well as the 14TB Pro model. Seagate supplied StorageReview with 8 samples of their new NAS HDDs, which we configured in RAID6. All the drives were tested in our NETGEAR ReadyNas 628X.

4K Standard deviation saw the Exos hit 53.6ms read in CIFS and the best score overall, along with a read score in iSCSI with 656.1ms near the highest. With write the Exos was in last with 1,910.2ms for CIFS and 2,180.7ms for iSCSI.

The next benchmark tests the drives under 100% read/write activity, but this time at 8k sequential throughput. Here the Exos was able to hit 63,643 IOPS (CIFS) and 128,207 IOPS (iSCSI) for read, placing it last in CIFS and in the middle for iSCSI. For write throughput the Exos hit 39,267 IOPS in CIFS and 47,002 IOPS in iSCSI, placing last in both.

Our next test shifts focus from a pure 8K sequential 100% read/write scenario to a mixed 8K 70/30 workload, where we will show how performance scales in a setting from 2T/2Q up to 16T/16Q. With CIFS, the Exos X16 was on top from beginning to end, finishing at 1,302 IOPS. iSCSI saw the other end where the drive was at the bottom throughout. 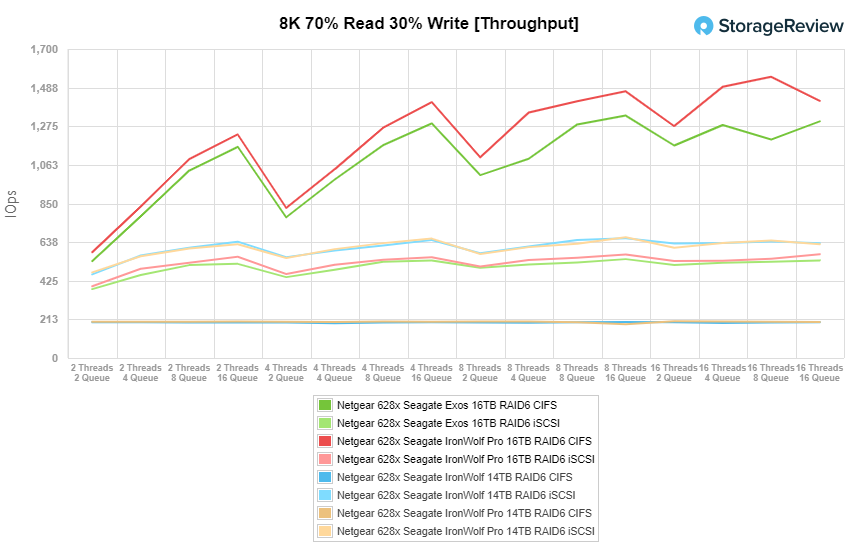 For 8K 70/30 average latency, again the CIFS configuration of the Exos drive came in second with a maximum of only 196ms about 1,000ms less than most of the other drives tested. The iSCSI configuration was again in last but only by a bit. 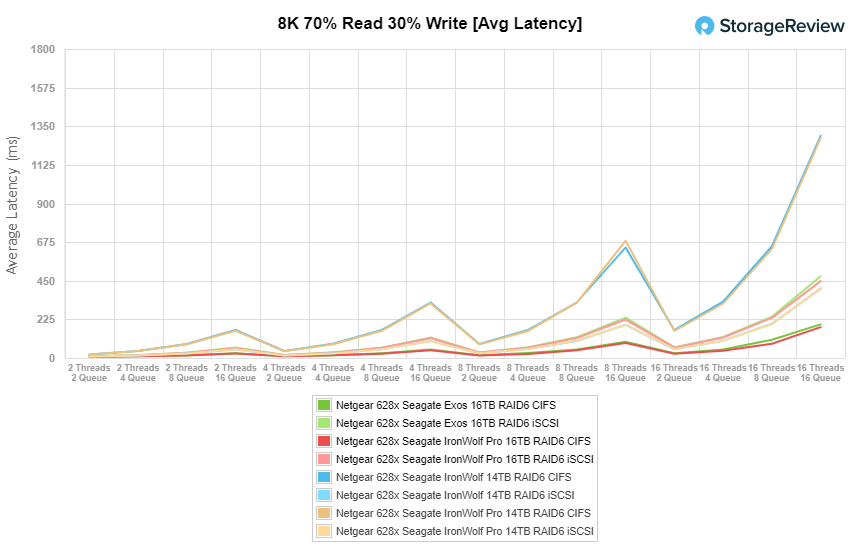 Next up is 8K 70/30 maximum latency where the Exos performed at the bottom of the pack in both CIFS and iSCSI. 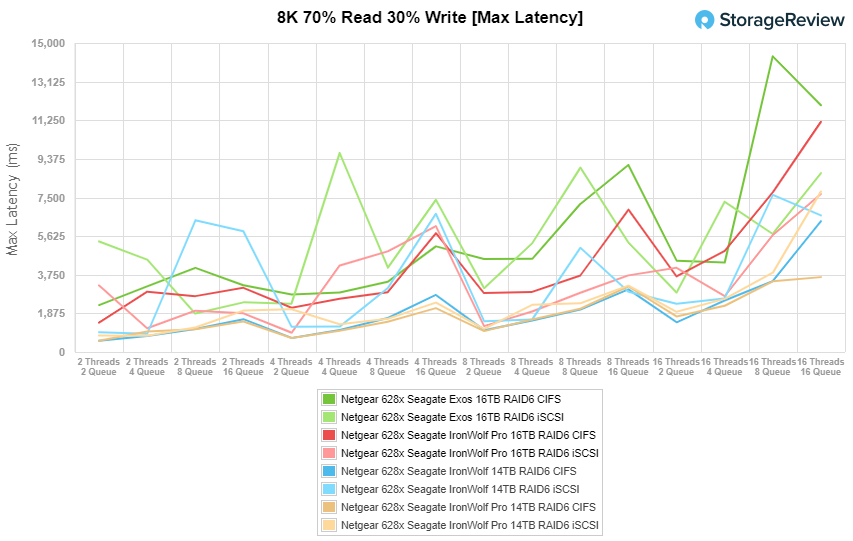 The same performance placement can be seen in 8K 70/30 Standard Deviation where the Exos was last in both CIFS and iSCSI. 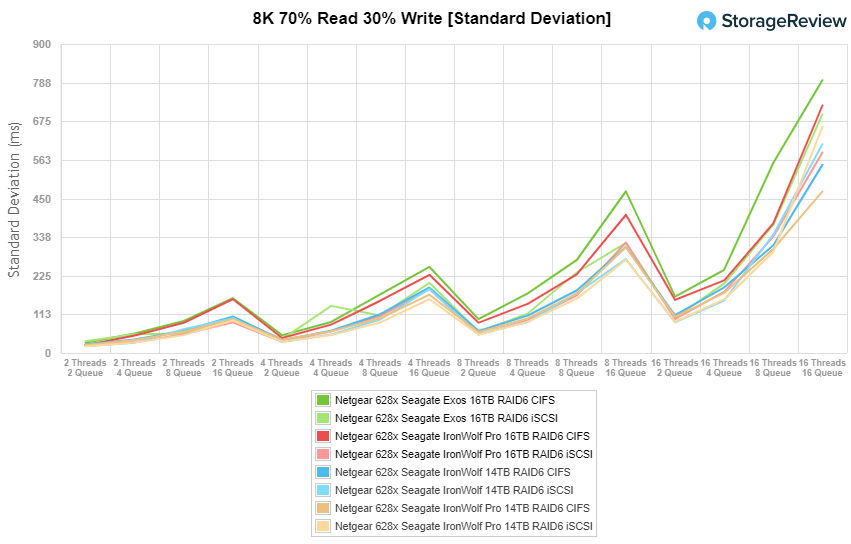 Our last test for the Exos X16 is the 128k benchmark, which is a large-block sequential test that shows the highest sequential transfer speed. For read the Exos hit 2.31GB/s in CIFS and 1.76GB/s in iSCSI, placing in the middle of the iSCSI and tied for the top of the CIFS, IronWolf Pro 16TB having the same score. For write we saw 900MB/s in CIFS, second to last place, and 1.12GB/s iSCSI, placing in the middle.

Seagate has released its largest HDD, 16TB, with the Seagate Exos X16. A 3.5” form factor, the Exos X16 is stated to supply up to a third more petabytes per rack compared to 12TB drives, making it ideal for hyperscale applications/cloud data centers, scale-out data centers, Big Data applications, and distributed files systems such as Hadoop and Ceph. Seagate leverages a helium sealed construction to not only help hit the higher capacity, but to lower power costs as well as lower weight being sealed versus screwed shut (a small amount adds up in a rack). The drive comes with a 5-year limited warranty.

As far as performance goes, the Exos X16 performed well for its given use cases. We tested the Exos X16 drives in both iSCSI and CIFS configurations in RAID6. In our 4K CIFS is really shined with 4,741 IOPS read and again in averages latency with only 54ms (CIFS). 4K Standard Deviation saw the Exos with the best read score at 53.6ms, again in CIFS. The Exos was a very strong performer in our 8K 70/30 throughput and average latency, taking the top spot in both in CIFS configuration. In our large-block sequential, 128k benchmark the Exos in RAID6 had a measured bandwidth of 2.31GB/s read in CIFS and 1.12GB/s write in iSCSI, landing about in the middle of the pack.

Seagate is shipping the largest enterprise drives at the moment with the 16TB Exos X16 (as well as a 16TB IronWolf). While it does have some highlights in certain configurations it has average performance in others. Still, one doesn’t buy a 16TB drive for performance alone. If density and capacity are the main concerns, look no farther at the moment.