As AMD rolled out their new EPYC Rome 7002 CPU series today several vendors have announced servers that support the new technology, including GIGABYTE. In fact, GIGABYTE has released an entire series of rack servers that support the EPYC Rome, the R-Series. The R-series is a general-purpose server family with a balance of resources. The series offers both 1U and 2U servers with a variety for storage media combinations. For this particular review we will be looking at the GIGABYTE R272-Z32 Server sporting 24 U.2 NVMe bays.

As AMD rolled out their new EPYC Rome 7002 CPU series today several vendors have announced servers that support the new technology, including GIGABYTE. In fact, GIGABYTE has released an entire series of rack servers that support the EPYC Rome, the R-Series. The R-series is a general-purpose server family with a balance of resources. The series offers both 1U and 2U servers with a variety for storage media combinations. For this particular review we will be looking at the GIGABYTE R272-Z32 Server sporting 24 U.2 NVMe bays.

From the hardware side of things, the server leverages GIGABYTE’s EPYC Rome MZ32-AR0 server motherboard. The motherboard fits a single AMD EPYC 7002 SoC as well as 16 DIMM slots for DDR4 memory. The server has 24 slots for NVMe storage, hot-swappable, as well as two slots in the rear for SATA SSDs or HDDs. For expansion the motherboard comes with seven PCIe expansion slots and one Mezzanine connector, giving customers room to grow or add the accessories they need. In the server as configured the NVMe bays consume most of the available PCIe slots as well as the Mezzanine slot for PCIe lanes to the front backplane. In the end customers are left with three PCIe slots for true expansion. 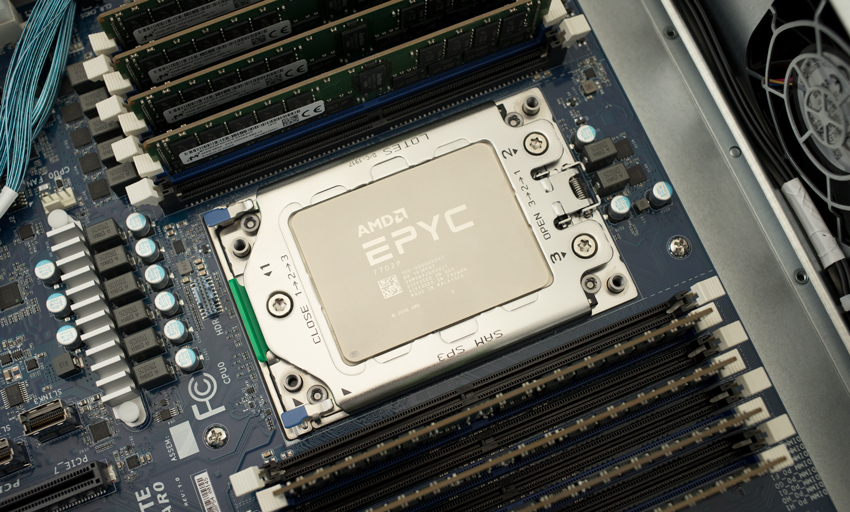 For our particular build we are leveraging the AMD EPYC 7702P CPU. For RAM we leveraged 8 32GB 3200MHz Micron branded DDR4 modules. For storage we used 12 Micron Pro 9300 SSDs, the 3.84TB capacity version.

Starting with the front we will work our way through the inside to the back of the server and detail all the features. The front of the server features 24 2.5-inch U.2 NVMe bays, two USB 3.0 ports, a power button, a recessed reset button, and an ID button. The ID button is useful in a datacenter as there is an LED visible from both the front and back of the server. In a room of a few dozen servers the ID indicator will light up to help you identify the machine you are working on.

On the inside we have 16 DDR4 slots and 7 PCIe slots on a single processor motherboard. All the slots on the motherboard are Gen 4, which double the speeds of the previous generation. As each NVMe bay needs its own PCIe connection to the motherboard our configuration includes five daughter boards to supply the NVMe bays with connectivity. For user customization there are three open PCIe slots, all half height. Of the three open slots, one is mechanically and electrically x8. The other two slots are mechanically x16, one is x8 electrically and the other is x16 electrically. With the PCIe cabling the airflow to the cards could be limited, so these are more for networking connectivity, with a lower LFM airflow requirement versus a GPU that would require additional cooling. Closer to the front of the server there is a row of 4 chassis fans that are field hot swappable. 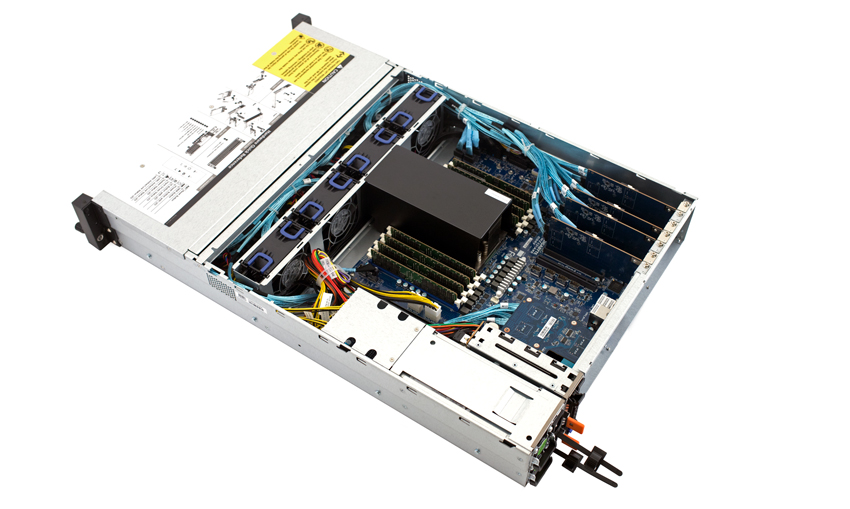 Finally, the back of the server. It’s pretty standard stuff as far as servers go. There are three USB 3.0 ports, two 1GbE ports, one management port, an ID switch, a serial port, a VGA port, two SATA bays, and two 1200 watt power supplies. While on the front there are NVMe bays with expensive high-performance storage the SATA bays on the back provide high capacity low cost storage for boot drives. Matching what was seen on the front is a corresponding ID button on the back. Its nice to see the serial port still holding on with a next-generation platform for the legacy products that still leverage it.

As stated the GIGABYTE R272-Z32 has its own GSM remote management software but can also leverage AMI MegaRAC SP-X platform for BMC server management. We will be using the MegaRAC for this review looking at two components of the KVM: The management screen and its associated landing pages as well as the remote console popup window for Server OS management and loading software.

From the main management screen one can view quick stats on landing page and see several main tabs running down the left side including: Dashboard, Sensor, System Inventory, FRU Information, Logs & Reports, Settings, Remote Control, Image Redirection, Power Control, and Maintenance. The first page is the dashboard. Here one can easily see the uptime of the BMC, pending assertions, access logs and how many issues are up, sensor monitoring, and the drive slots and how many events they’ve had over the last 24 hours as well as 30 days. 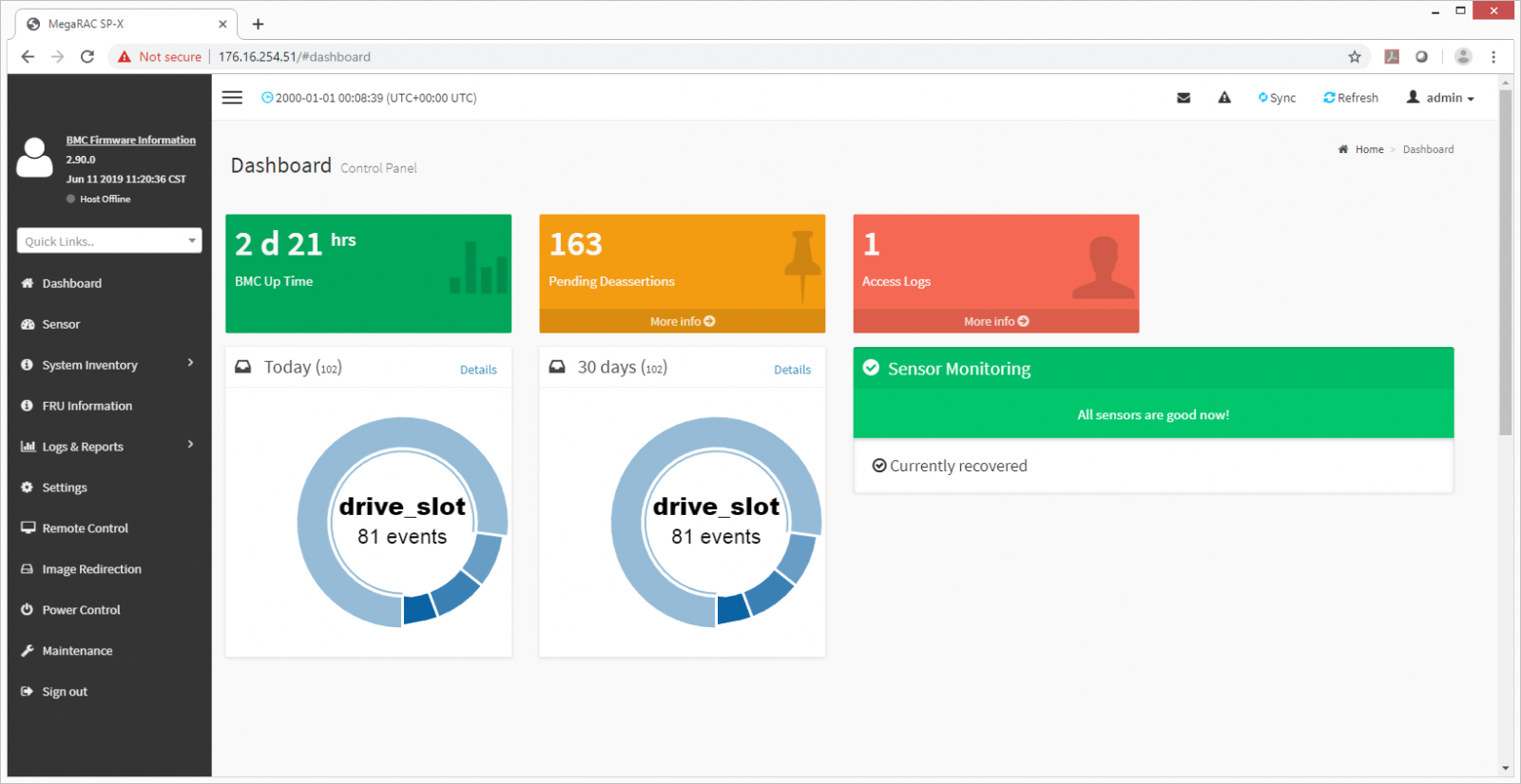 Clicking on the sensors, users can quickly see the discrete sensors and their current state. Users can also see normal sensors and how they are currently reading and behaving (e.g. a fan RPM and when it came on). 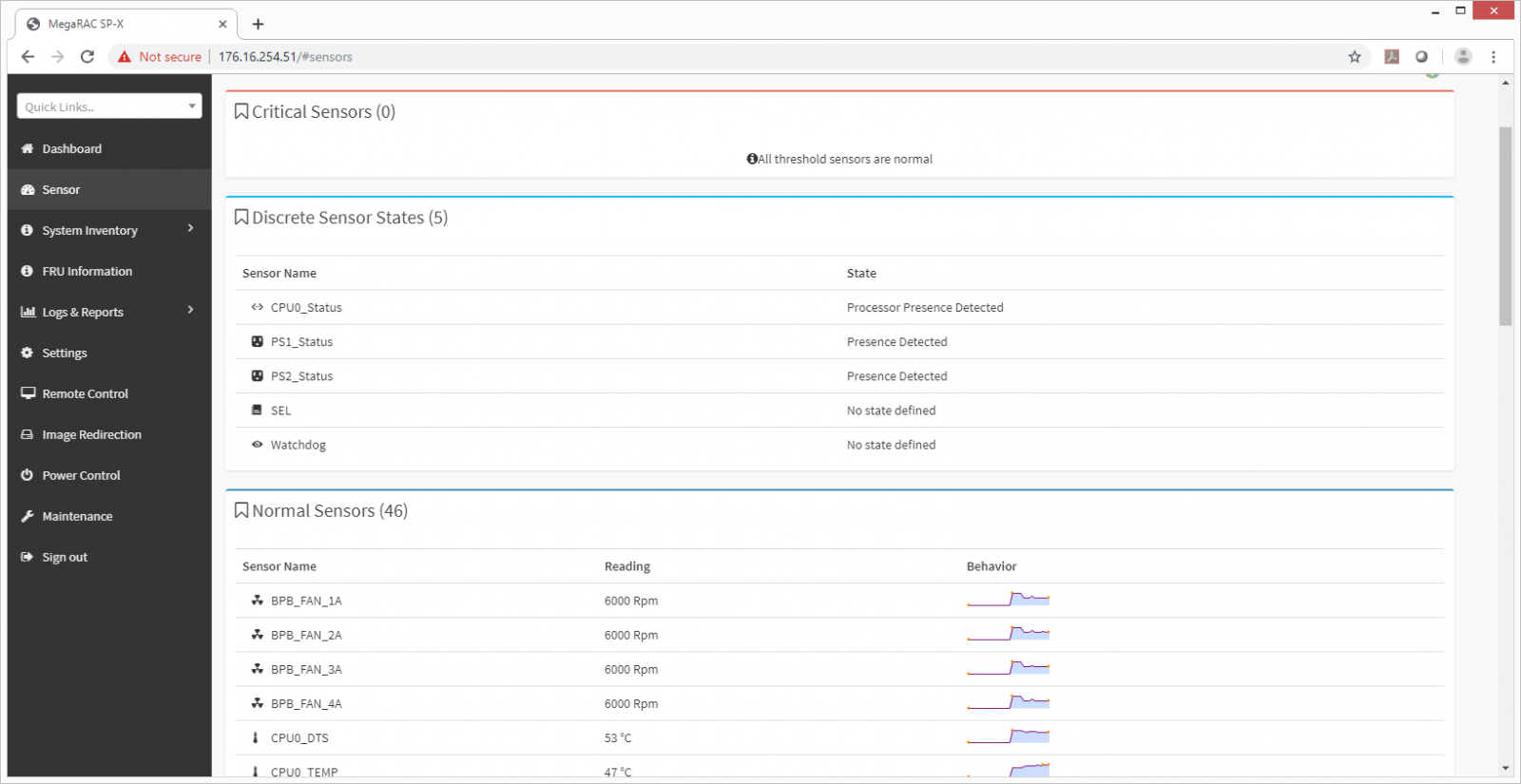 The System Inventory tab lets admins see various hardware in the server. Clicking on the CPU gives detailed information about which one it is, AMD EPYC 7702P in this case. Users can also see cache information for the CPU. 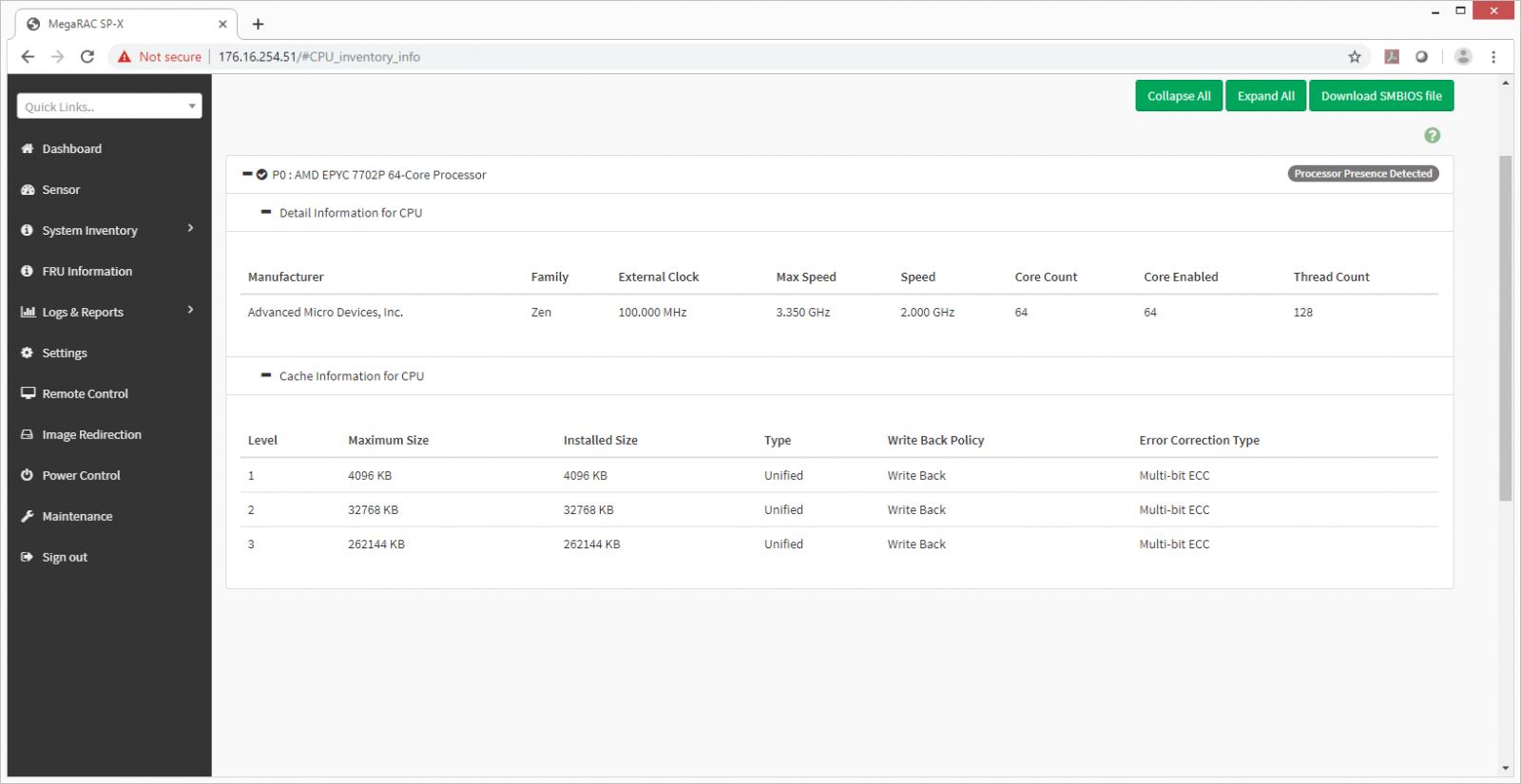 Much like the CPU, the DIMM inventory subtab gives detailed information on the RAM including the maximum possible, how much is installed on which slots, whether or not it is ECC, as well as details into individual DIMMs. 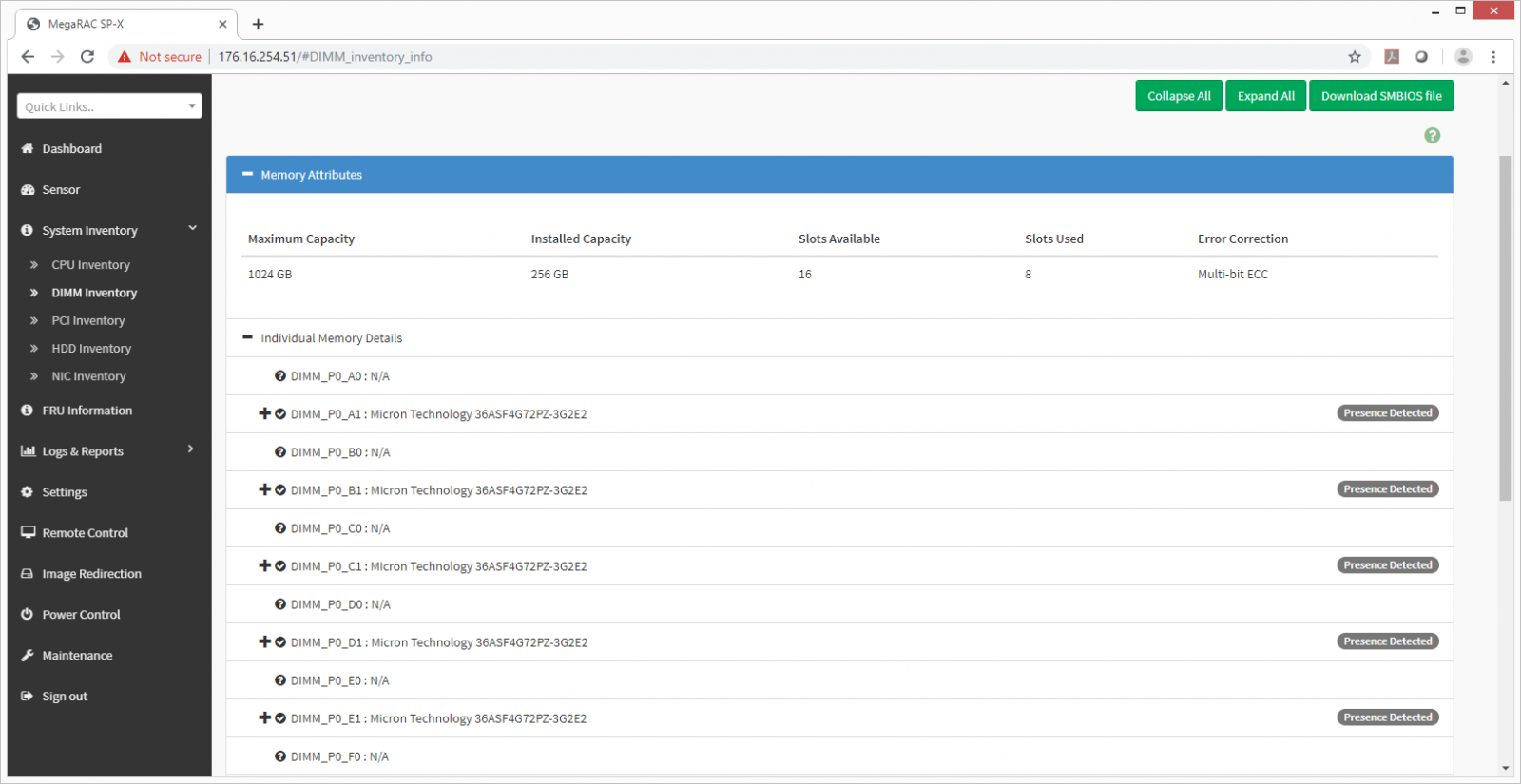 The HDD Inventory subtab is similar to the above giving information about the drives installed and the ability to drill down for more information. 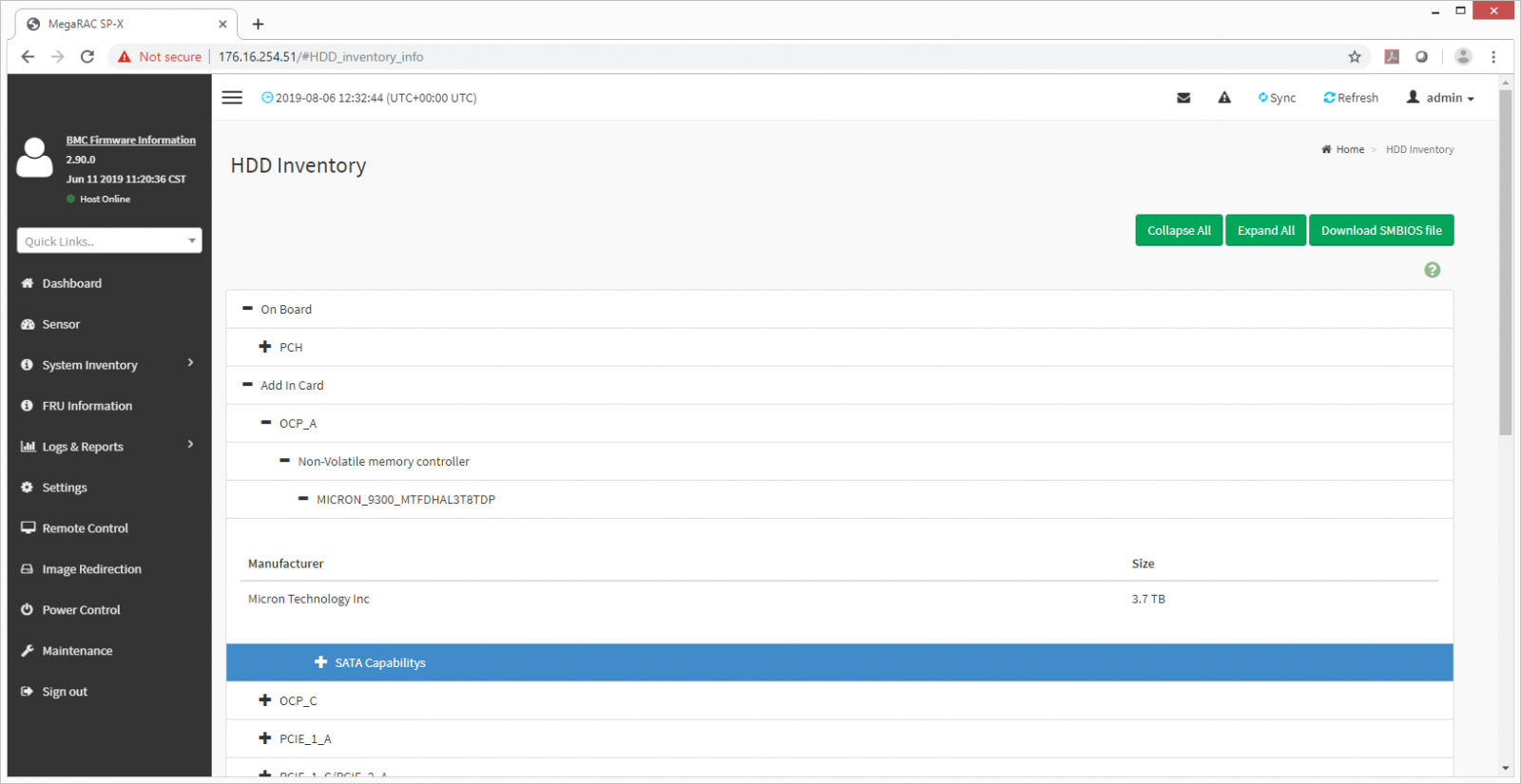 The next main tab is the FRU (Field Replaceable Units) information. As the name implies, this tab gives information on FRU unites, here we can see info on the chassis and the motherboard. 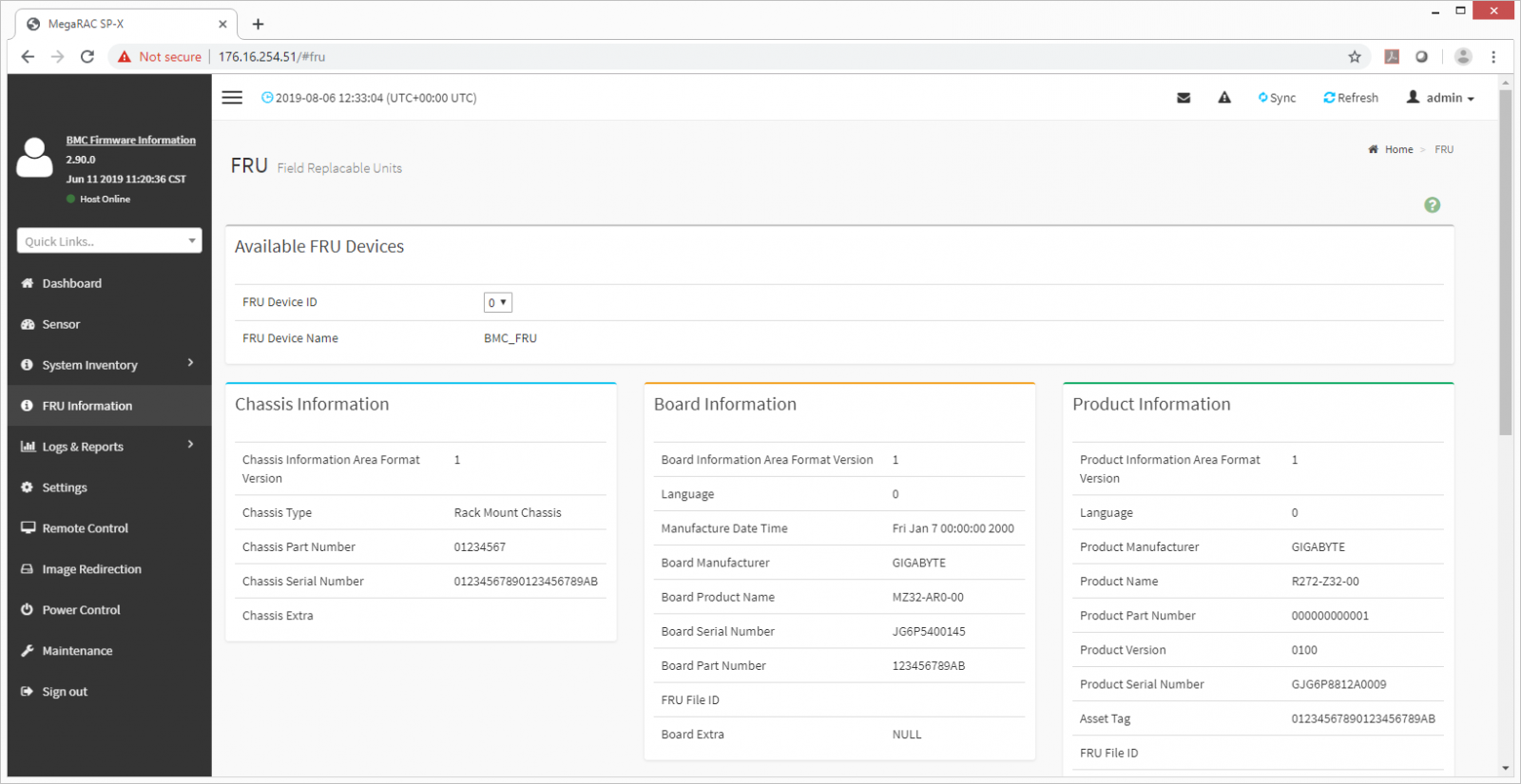 The Settings tab in fairly comprehensive. It gives admins access to all the setting options they need and the ability to change them to cater to their chosen workloads. 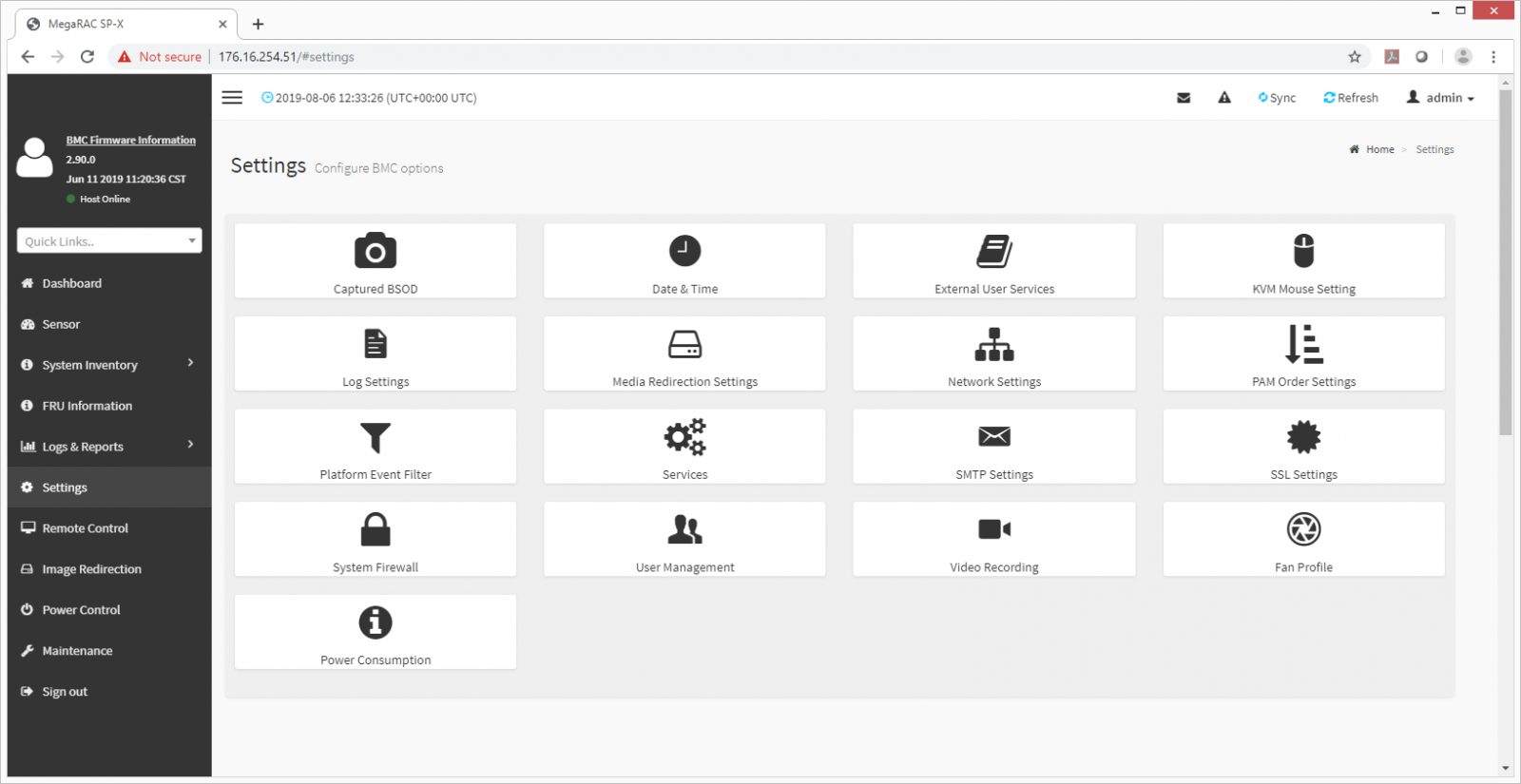 The Next tab is Remote Control. Here users have the option of either launching a KVM or launching JAVA SOL. We launched the KVM. 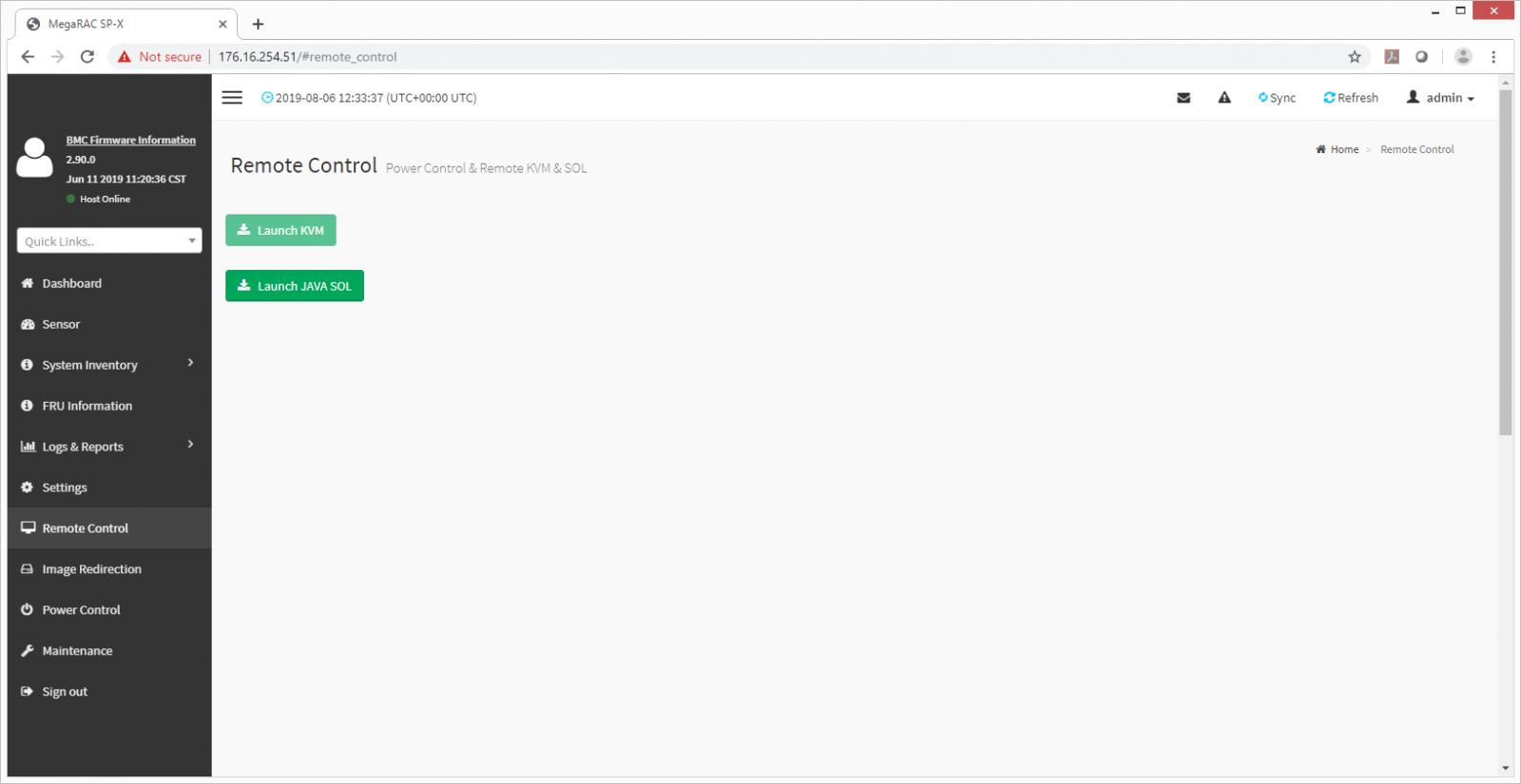 Once launched it gives users remote access to the server OS, which in our example is a Linux loading screen. Remote console windows are an invaluable tool in a datacenter where you want local control without having to haul over a monitor, keyboard and mouse crash cart to do so. Visible in the top right of the window is the CD image feature which lets you mount ISOs from your local system to be remotely accessible on the server for loading software. 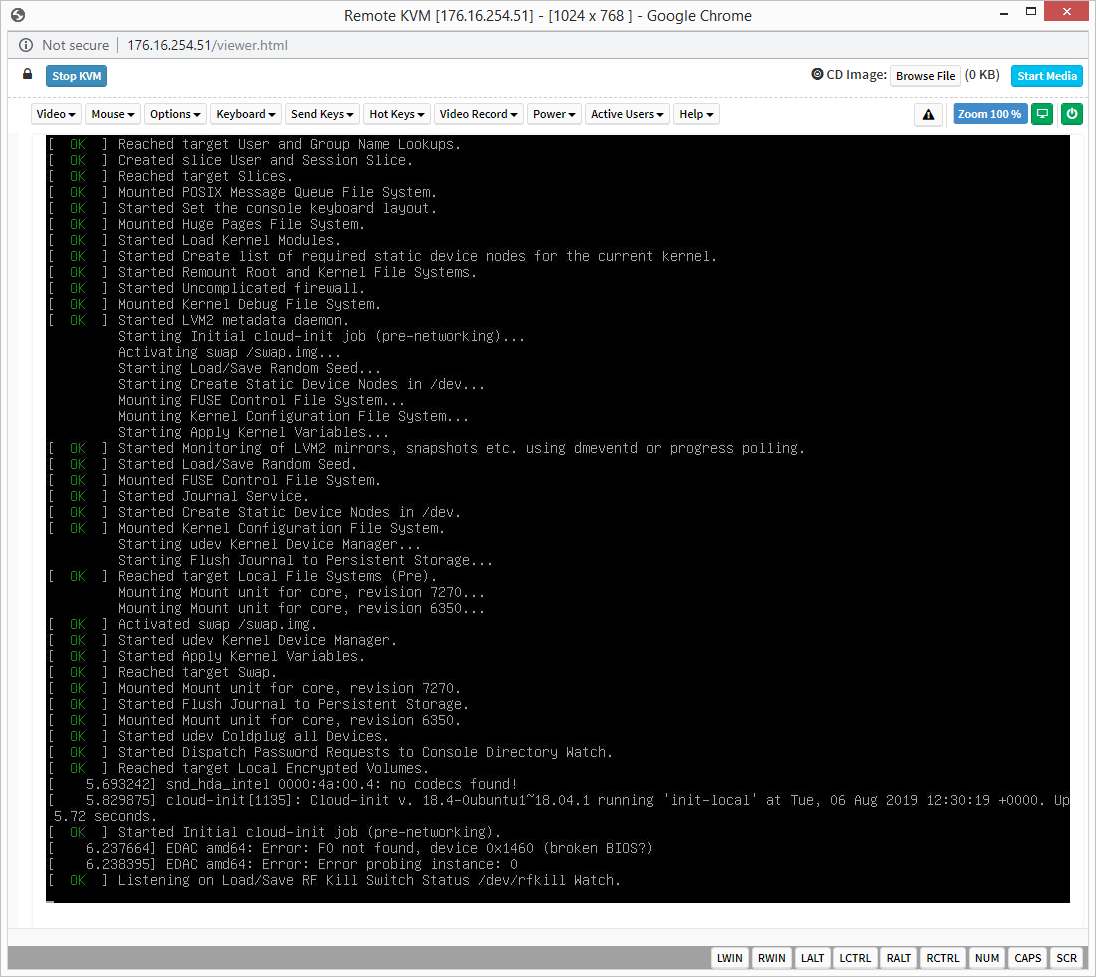 The Power Control tab gives a small list of power actions including Power Off, Power On, Power Cycle, Hard Reset, and ACPI Shutdown. 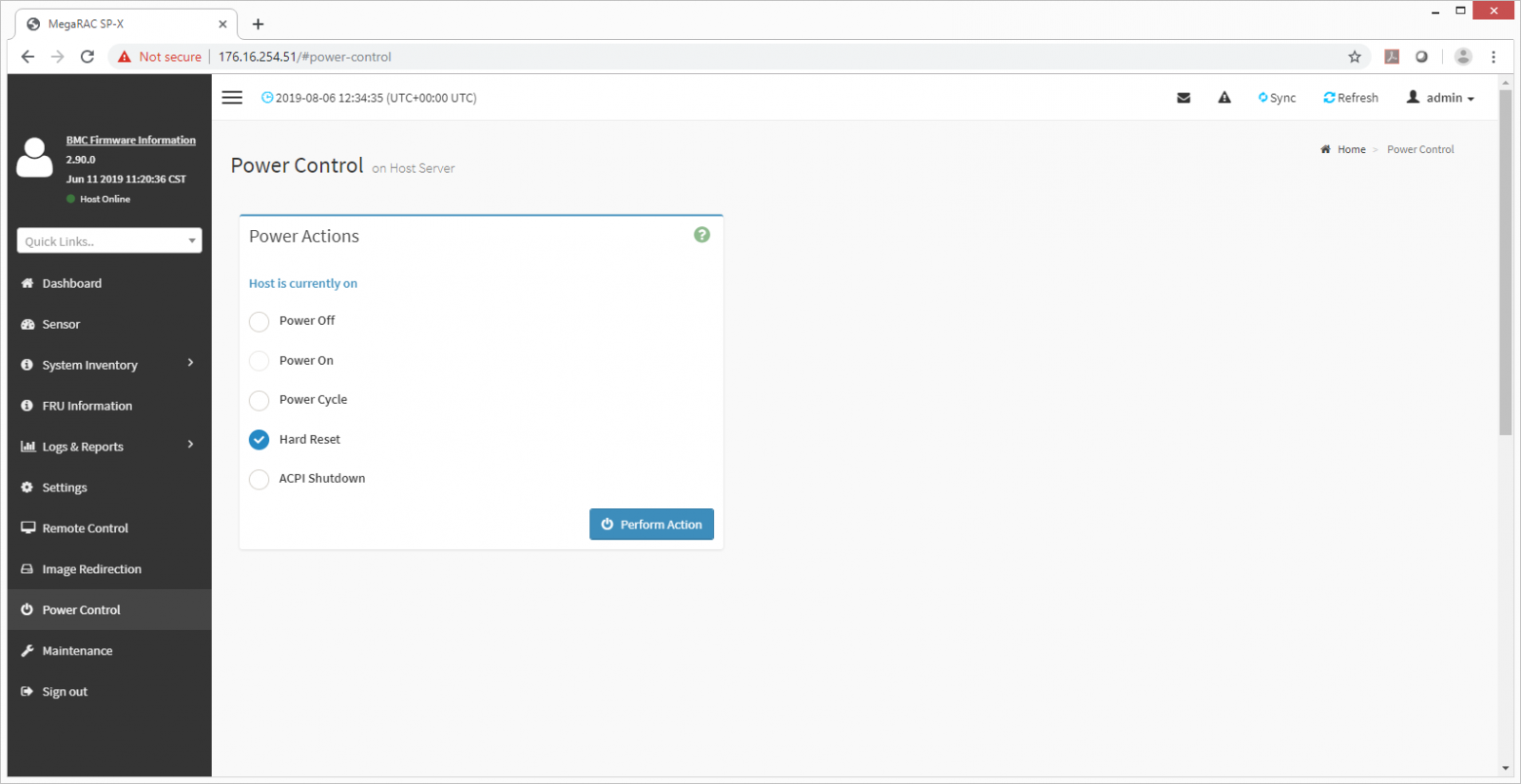 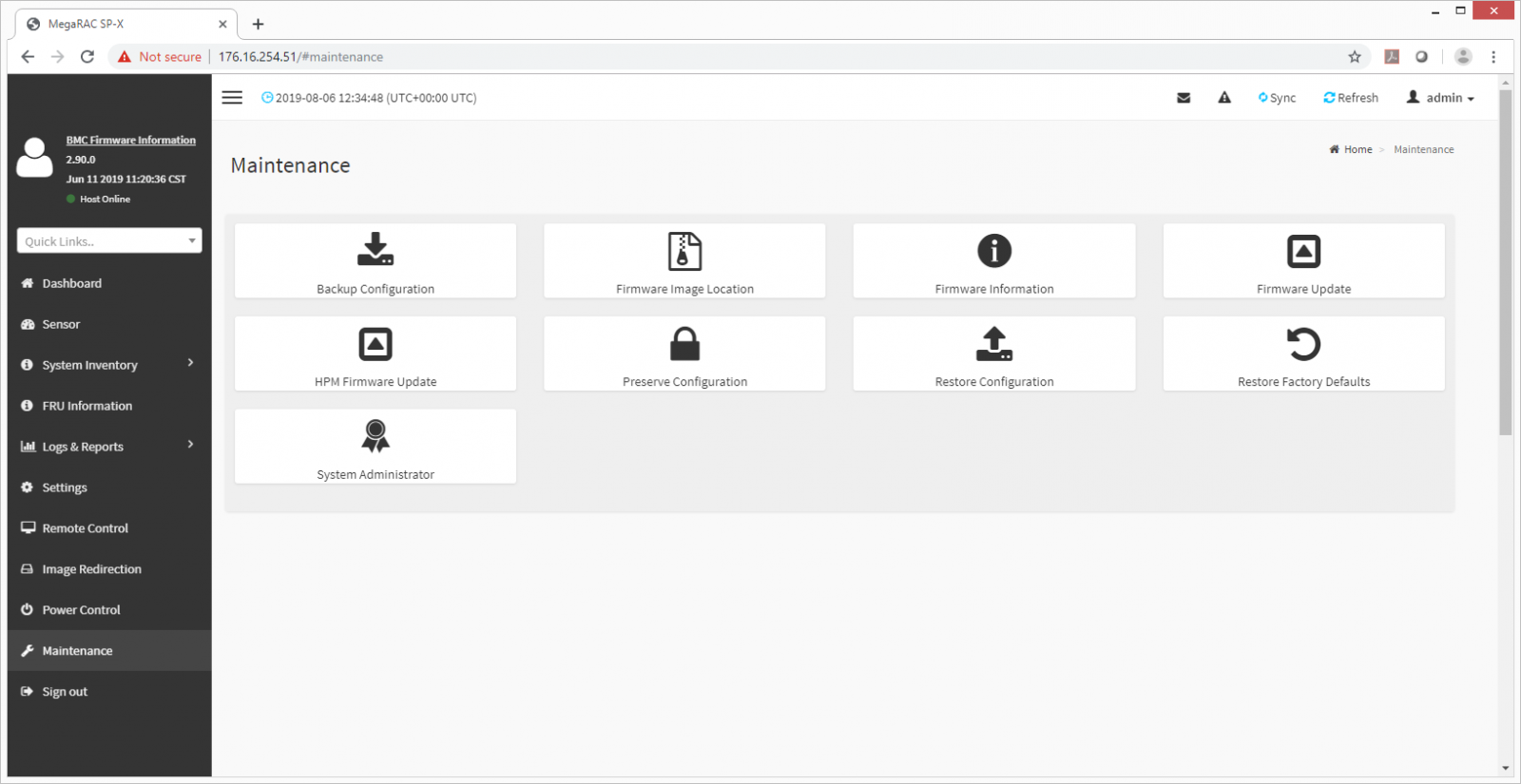 The BIOS information can also be accessed through the Firmware information under the Maintenance tab. 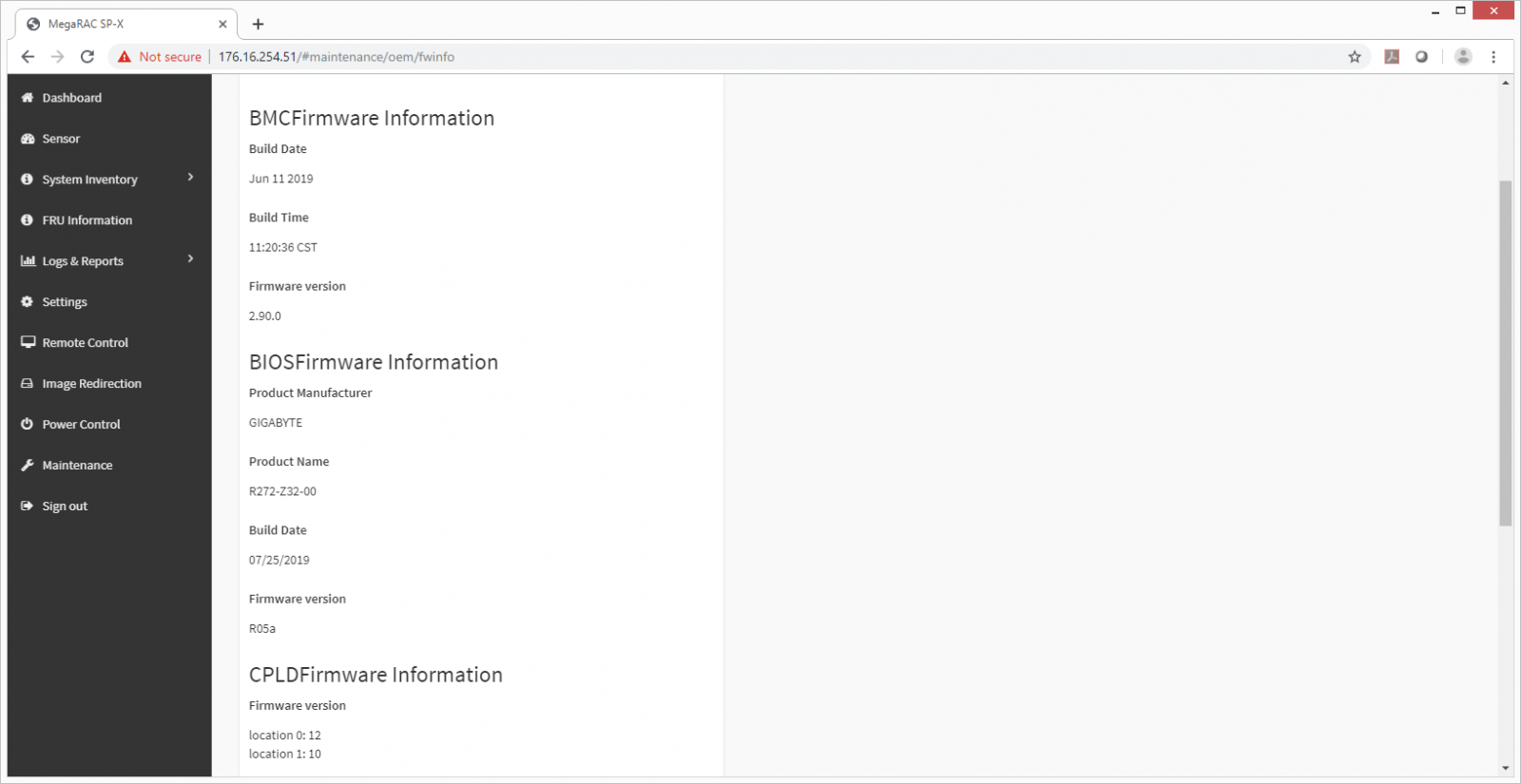 For our initial testing lineup we focus on synthetic benchmarks inside a bare metal Linux environment. We installed Ubuntu 18.04.02 and leveraged vdbench to apply our storage-driven benchmarks. With 12 Micron 9300 Pro 3.84TB SSDs loaded into the server, our focus was saturating the CPU with storage I/O. As additional OS support comes out fully supporting AMD EYPC Rome, primarily VMware vSphere (waiting on 6.7 U3 to be GA), we will add to the testing on this server platform.

In 64K write, the server peaked at about 110K IOPS or about 6.8GB/s at a latency of 246.1µs before dropping off significantly.

Next, we switched over to our VDI clone test, Full and Linked. For VDI Full Clone (FC) Boot, the EPYC Rome powered server had a peak performance of 1,680,812 IOPS at a latency of 220.4µs.

And finally with VDI LC Monday Login the EPYC Rome server had a peak performance of 216,084 IOPS with a latency of 521.9µs.

The new AMD EPYC 7002 CPUs are out, and the first server with the new processors (in our Lab, anyway) is the GIGABYTE R272-Z32. This 2U general purpose server uses the MZ32-AR0 motherboard, making it compatible with a single new EPYC Rome processor. The server has 16 DIMM slots, with a potential total of 1TB of DDR4 3200MHz RAM. The R272-Z32 has 24 hot-swap bays in the front for all NVMe storage, with two bays in the rear for SATA SSDs or HDDs. If customers need to added PCIe devices (including Gen4 devices now), there are seven slots in the rear, although only three are open. The server also supports AMI MegaRAC SP-X for BMC server management.

For a general-purpose server, the AMD EPYC Rome turned the GIGABYTE R272-Z32 into a beast. While we have good equipment in the server, we weren’t even close to maxing out its potential. As the list of OS’s that support Rome continue to grow, we will be able to see just how well the new CPUs stacks up across a plethora of workloads. These new processors with the servers that support them may be entering us into a new level of performance in the data center we’ve yet to see, especially when you start to factor into the untapped potential of PCIe Gen4