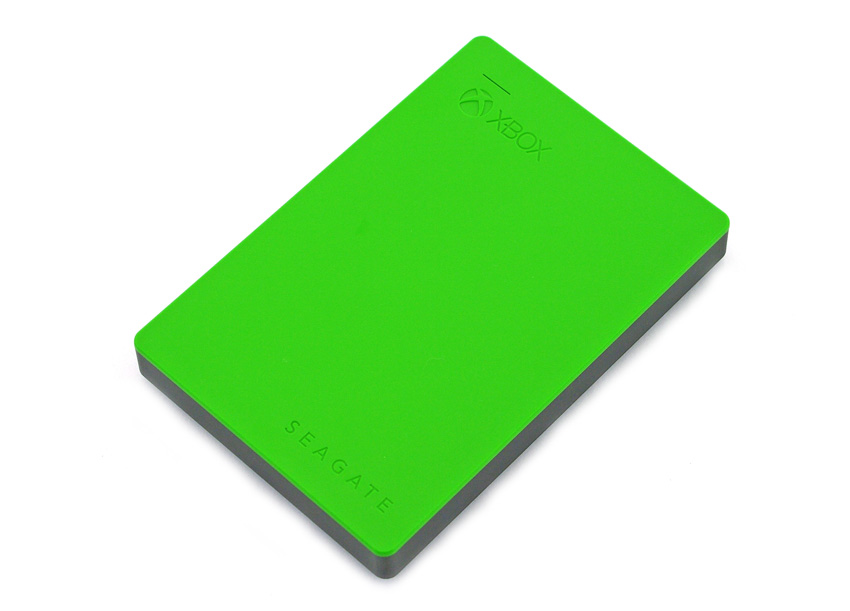 The eighth generation console from Microsoft, Xbox One, has just about everything a gamer wants: amazing graphics, a list of games that have better plots than most movies, enough entertainment apps to keep the most devoted couch potato happy, a more responsive Kinect, and plenty of methods for sharing game play and socializing with other gamers. One thing that is sorely lacking from both the Xbox One, and its rival the PlayStation 4, is storage. Initially the internal storage of the Xbox One was 500GB (Microsoft currently offers a 1TB SSD internal drive included with a $500 price). With modern games it doesn’t take long to fill up 500GB, and if gamers are buying digital copies or the tons of downloadable content (DLC) that comes with games now, they’ll fill up their drives even faster. Unless they have an external drive, such as Seagate’s.

Seagate’s drive offers a few benefits for gamers aside from just allowing them to store more games and DLC. The drive itself is portable. One can migrate their games to the drive and take it with them. If they are at a new location they can plug the drive into another console, sign in to their Xbox gold account, and start playing their games. The upcoming DVR function for Xbox One only works with external storage. Another upcoming function that will be extremely beneficial to have extra storage is the backward compatibility function. This function extends to all the “Games with gold” free digital downloads given to Xbox Gold members for both the Xbox One and the Xbox 360 consoles.

The Seagate Game Drive for Xbox comes with a 1-year limited warranty and has a street price of $99.

The drive is small enough to fit in one’s hand. The top is the shade of green that is associated with Xbox. In the upper right corner is Xbox branding with an LED light to indicate when it is plugged in. The bottom right side has Seagate branding. 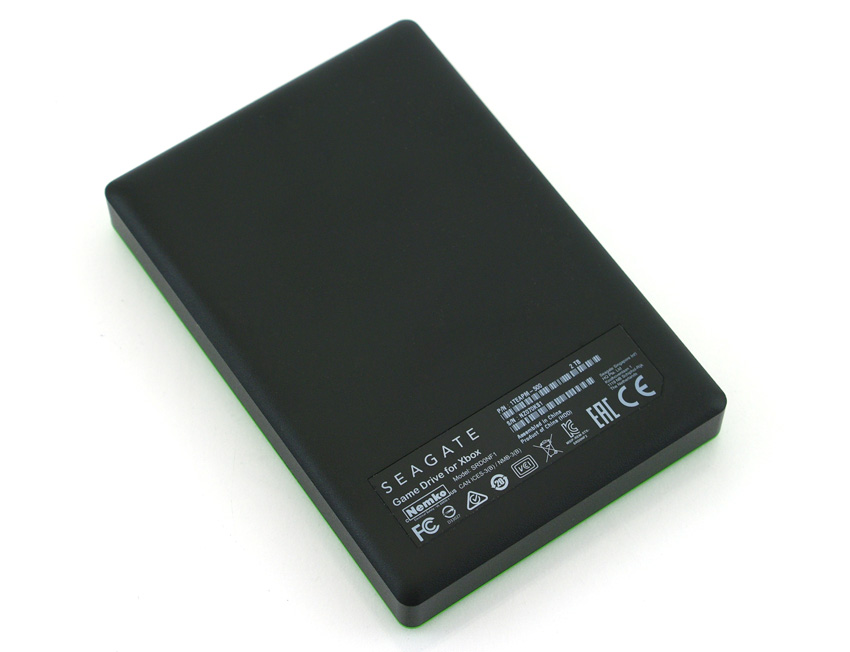 The bottom of the drive is matt black with information such as the drive type and its model/serial number. 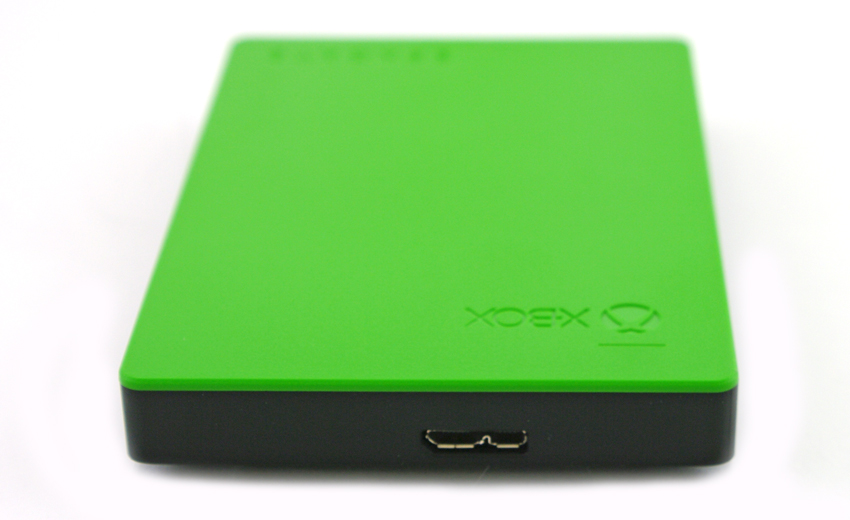 On the side closest to the Xbox branding is the interface port for the USB.

The design may seem as a bit of an odd choice as, while the green matches the green associated with the Xbox dashboard, it does clash with the outward design of both the Xbox One and the currently produced Xbox 360 (with the exception of special edition skins, both are high gloss black). One might conclude a matching drive, the Black WD My Passport Ultra for example or My Passport X, another game drive with a design to match the exterior of the Xbox, might be a better choice of design. However this particular design will appeal to the hardcore gamer/Xbox enthusiast that may be less interested in the drive matching the design of the console. And if aesthetics is a large issue the drive can be plugged into the rear port away from view.

Management for the drive is simple, as stated plug it into the console and it will automatically set itself up. If for some reason the drive gets wiped before hand (as we did testing it) the Xbox will notify users that it will reformat the drive for usage with the console. The formatting only takes a moment on the Xbox One, a bit longer on the 360 though I was using an older model for the test. 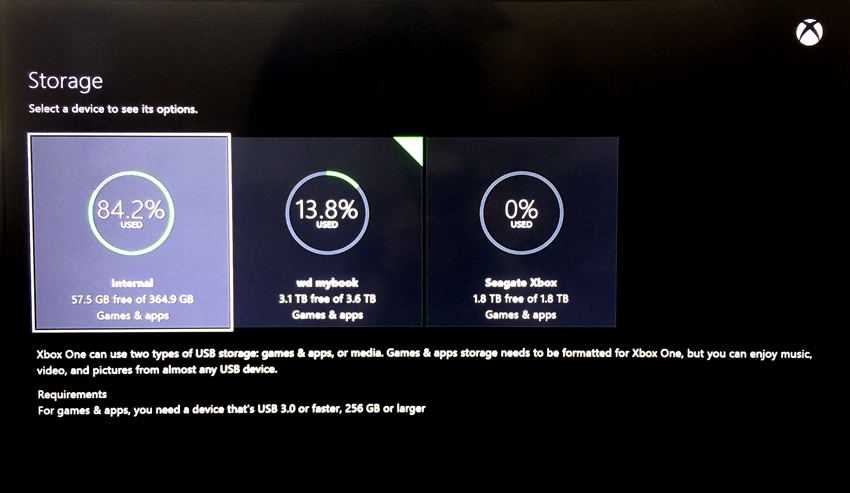 Once the drive is setup gamers can see the drive by going through setting in the dashboard and managing storage. They can also go to the My Games/Apps tab, highlight the game they want to migrate, press the menu button, and then go to manage game to migrate it to the new drive. User can also copy a game keeping a copy on two storage devices.

To determine its performance, we measured transfer speeds from the Seagate Game Drive For Xbox we connected to our HP Z620 workstation and compared it to the Seagate Plus Slim and Seagate Seven USB 3.0 portable drives.

For slightly more subjective testing, three full games (without any accompanying DLC) were migrated to the Seagate drive in less than 15 minutes. One game, Titanfall, with its season pass DLC took just under 6 minutes to migrate to the new drive. Loading the game from the drive seemed to take the same time or just a hair faster.

The Seagate Game Drive For Xbox adds 4 times the capacity to an original Xbox One console and 8 times the capacity to an Xbox 360 console (though both consoles have variations that come with higher capacities). The drive enables gamers to store up to 50 more games. The drive is portable, so users can take their games and play them on other consoles without downloading them again. The drive is bus powered and comes with a 1-year warranty. With upcoming features such as DVR and backward compatibility coming to the Xbox One, the Game Drive is an attractive addition to any serious or recreational gamer.

The Seagate Game Drive for Xbox is a cost-effective way for gamers to add capacity to their consoles and take full advantage of future functionality.