It’s always exciting when Samsung releases a new solid-state product, as they have been the clear market leader over the past few years in price-per-performance; each new addition to their portfolio has been an impressive and worthwhile upgrade. That being said, the Samsung 950 Pro M.2 line has finally hit the market, which is a tiny SSD designed to meet the demands of high-performance consumer and professionals. Because of its small M.2 form factor, the Samsung 950 Pro satisfies a plethora of uses cases where space is an issue, such as with ultra-slim notebooks and M.2 compatible workstation PC users that want to leverage Samsung’s pedigree in storage endurance, reliability and energy efficiency, not to mention performance. However, perhaps the most significant draw to this new drive is the company’s focus on giving their customers enterprise durability in the price range of a consumer-grade SSD.

It’s always exciting when Samsung releases a new solid-state product, as they have been the clear market leader over the past few years in price-per-performance; each new addition to their portfolio has been an impressive and worthwhile upgrade. That being said, the Samsung 950 Pro M.2 line has finally hit the market, which is a tiny SSD designed to meet the demands of high-performance consumer and professionals. Because of its small M.2 form factor, the Samsung 950 Pro satisfies a plethora of uses cases where space is an issue, such as with ultra-slim notebooks and M.2 compatible workstation PC users that want to leverage Samsung’s pedigree in storage endurance, reliability and energy efficiency, not to mention performance. However, perhaps the most significant draw to this new drive is the company’s focus on giving their customers enterprise durability in the price range of a consumer-grade SSD.

The biggest difference between Samsung’s 950 Pro and the company’s previous SM951-NVMe and AHCI-based PCIe 3.0 M.2 SSDs is that it uses the company’s new MLC V-NAND (128Gb die with UBX controller), which is their first consumer-grade NVMe M.2 drive to leverage this technology. It also supports the PCIe 3.0 x4 interface. As such, the Samsung 950 Pro is quoted to reach blistering sequential read and write speeds up to 2,500MB/s and 1,500MB/s, respectively, while its random read and write performance has the ability to hit 300,000 IOPS and 110,000 IOPS. This makes it ideal for intensive workloads such as with computer-aided design, data analysis and engineering  simulation. Users will also benefit from its NVMe compatibility with improved power efficiency, which will increase battery life and most likely reduce overall operating costs.

High temperatures and heat due to heavy workloads can certainly be an issue, as memory performance might malfunction as a result. Samsung, however, has equipped the 950 Pro with Dynamic Thermal Throttling Protection technology, which automatically monitors and maintains optimal operating temperature to help eliminate the risks of potential overheating.

The Samsung has certainly taken a different route with the design of the 950 Pro with its use of a black color scheme including the PCB. The M.2 form factor is much smaller than a traditional 2.5 inch SSD and is closer to the size of a RAM memory stick, measuring in at just 80.15mm x 22.15mm. Because of the exposed parts, however, users should take care when handling, transporting, or installing Samsung 950 Pro M.2.

Looking at the front side of the Samsung 950 Pro shows sticker, which partially covers the NAND chips. It also displays information about the drive including the model number and capacity size. Both 256GB and 512GB capacities use the Samsung UBX controller and Samsung V-NAND.

The other side of the M.2 drive is home to a branding sticker that denotes the product name, form factor, and use of V-NAND technology.

All consumer SSD benchmarks are conducted with the StorageReview HP Z620 Workstation. We compared 950 PRO with the following drives:

When switching to smaller 4K random transfers, the Samsung 950 Pro took top spot in both read and write activity. Here, it recorded 52.80MB/s read and 175.41MB/s write, respectively. Hot on its heels was the SM951 NVMe, which boasted very similar numbers.

When looking at 4K write latency (both the average and maximum readings) the Samsung 950 Pro showed top average latency readings with 0.0219; however, the SM951 NVMe showed the best results in max latency with just 0.58ms (the 950 Pro recorded 1.08ms). 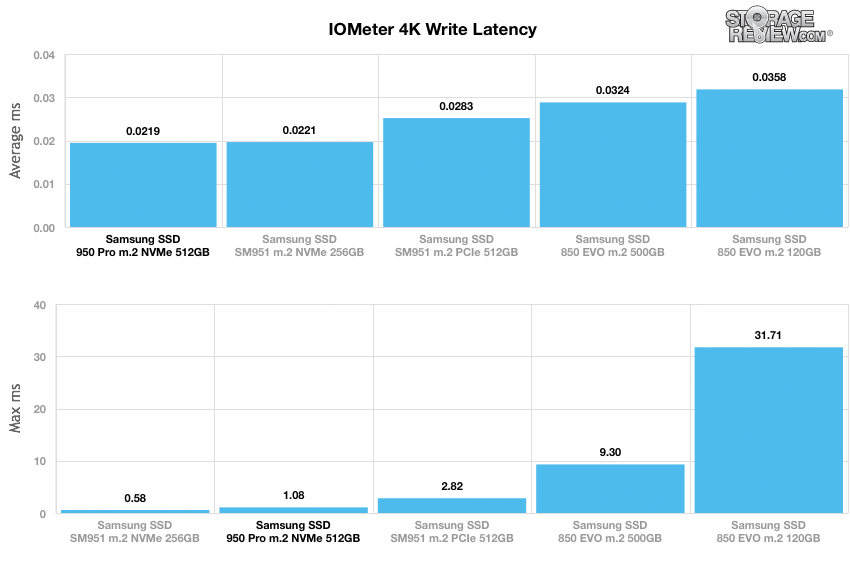 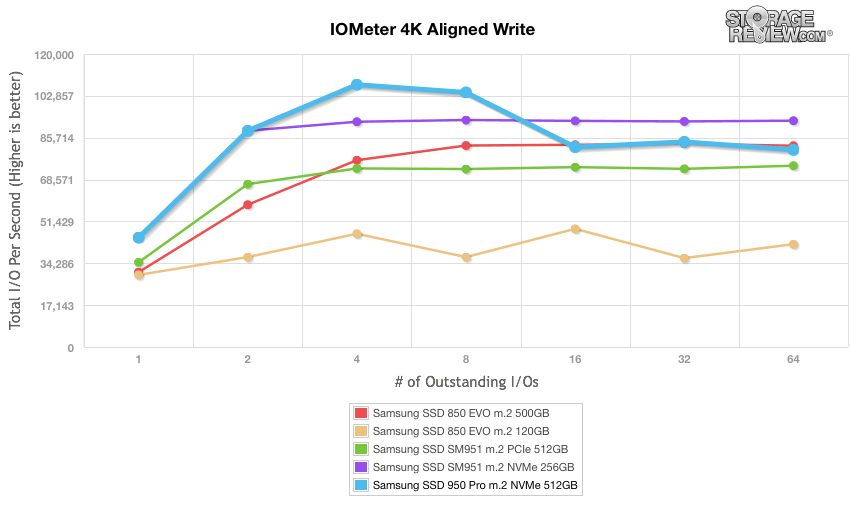 Moving on to our aligned read benchmark showed much closer results, with the Samsung 950 Pro trailing just behind the Samsung SM951 256GB at 18,3105.82 IOPS in the terminal. The difference between the two M.2 SSDs was less than 1,000 IOPS this time around. 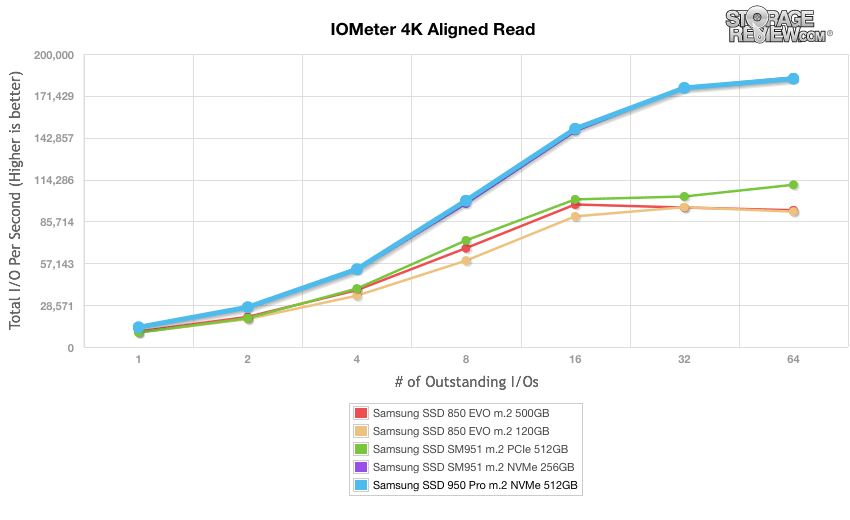 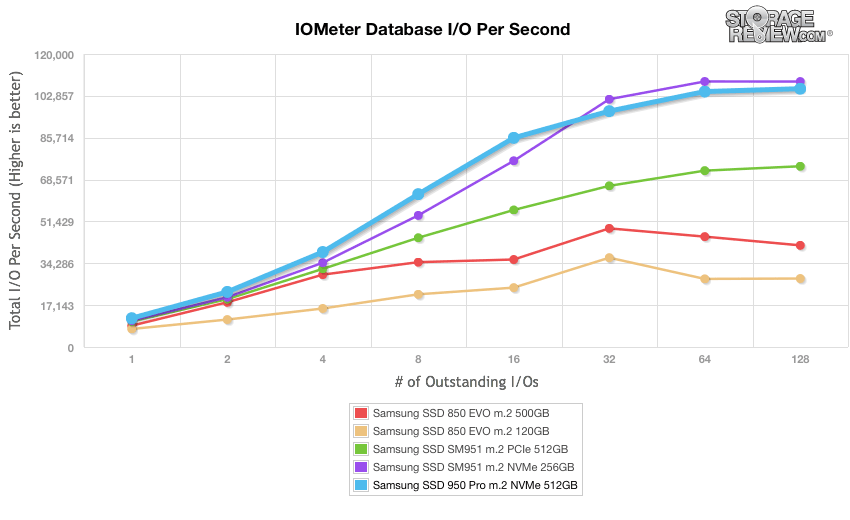 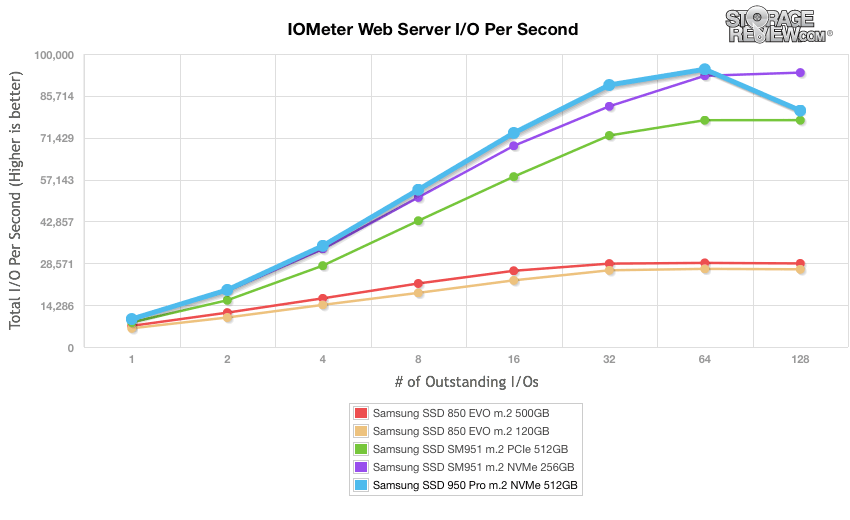 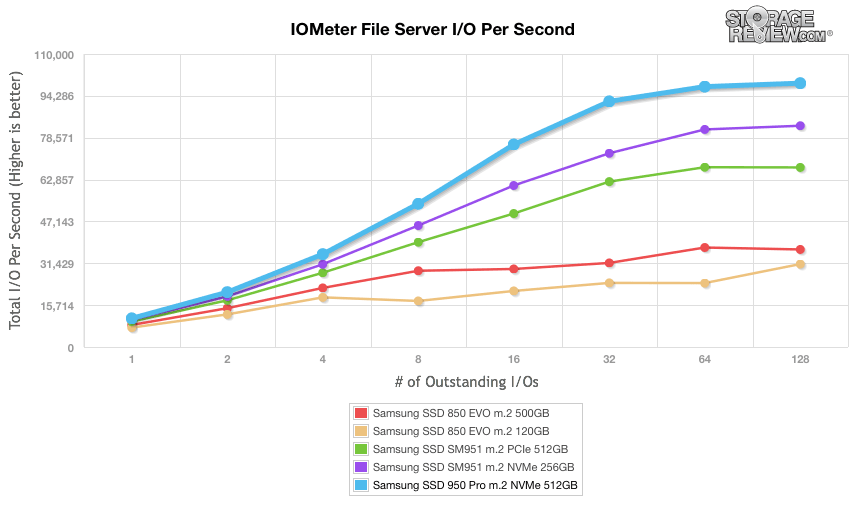 Our last profile looks at workstation activity, which is comprised of a 20% write and 80% read mixture using 8K transfers. Continuing top performance, the Samsung 950 Pro posted a range of 10,999.2346 IOPS to 125,319.78 IOPS in the terminal, which gave it the top honors. 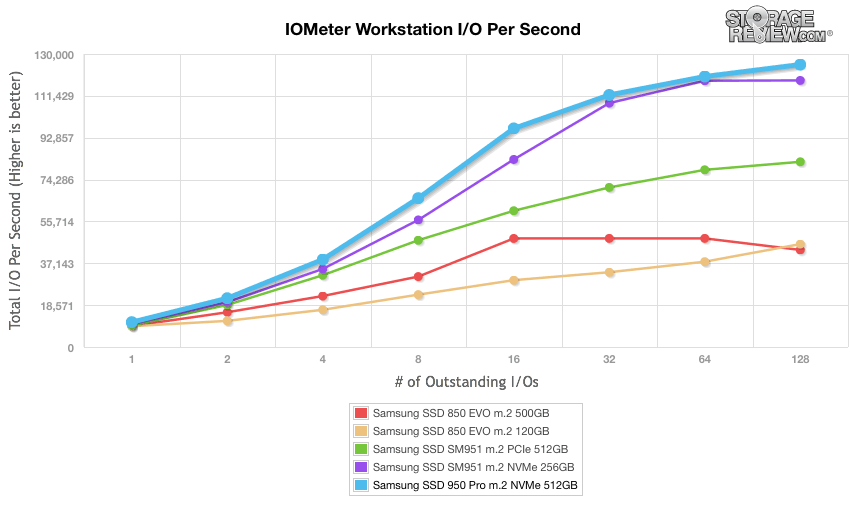 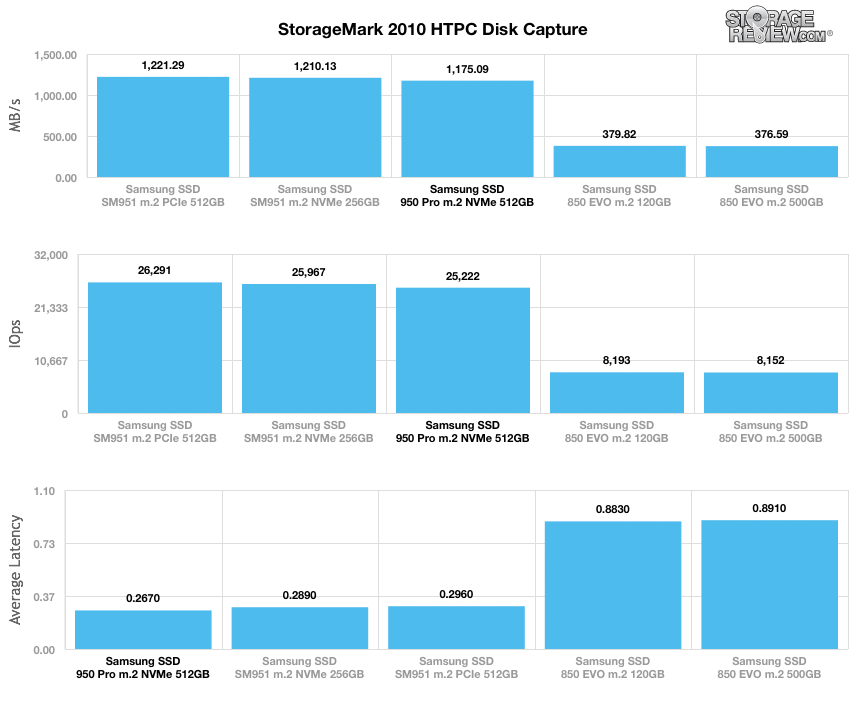 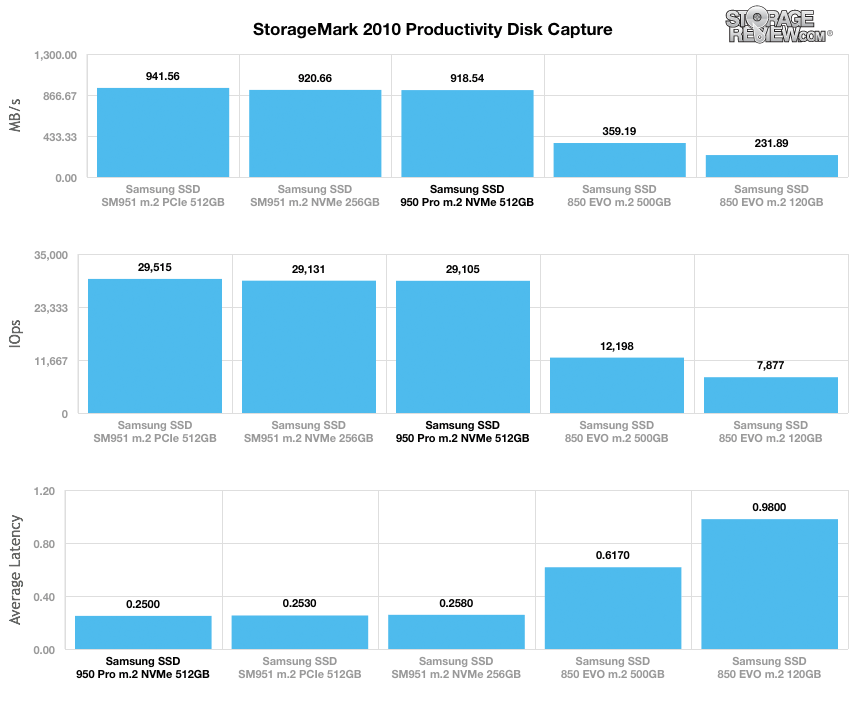 In our Productivity trace, results told a similar story as the Samsung 950 Pro posted middle of the pack results with 29,105 IOPS and 918.54MB/s, though the disparity between the numbers were marginal. Its average latency took top spot with 0.25ms.

Our last real-life test covers disk activity in a gaming environment. Unlike the HTPC or Productivity trace, this one relies heavily on the read performance of a drive. To give a simple breakdown of read/write percentages, the HTPC test is 64% write, 36% read, the Productivity test is 59% write and 41% read, while the gaming trace is 6% write and 94% read. The test consists of a Windows 7 Ultimate 64-bit system pre-configured with Steam, with Grand Theft Auto 4, Left 4 Dead 2, and Mass Effect 2 already downloaded and installed. The trace captures the heavy read activity of each game loading from the start, as well as textures as the game progresses. In this trace we recorded 426MB being written to the drive and 7,235MB being read. 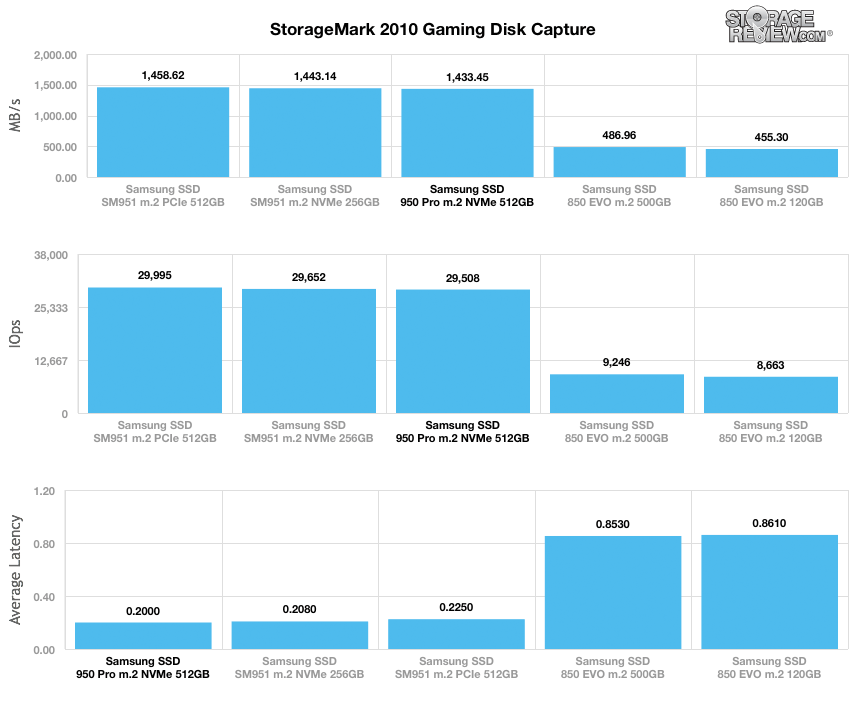 The Samsung 950 Pro M.2 SSD is certainly one of the more highly anticipated consumer releases this year and generally lives up to the hype. It impressed us with some fantastic throughput and latency during our benchmarking tests, though it did fall behind its M.2 brethren in various categories (but not by much). The drive itself comes in capacities of 256GB and 512GB. Under the hood, the 950 Pro is equipped Samsung’s V-NAND (128Gb die with UBX controller), which is the company’s first consumer-grade NVMe M.2 drive to leverage this technology. Samsung’s new drive is also designed for power users and professionals looking to upgrade their M.2-compatible ultra-slim notebooks and desktop workstations to boast roughly four times the performance of traditional SATA SSDs. Samsung also designed the 950 Pro with low-power and power efficiency in mind.

As for the specifics of its performance, the Samsung 950 Pro posted impressive overall results, particularly during our consumer synthetic benchmarks. To summarize, our 2MB sequential transfer test showed 1,777.13MB/s read and 1,473.52MB/s write; though reads couldn’t quite outperform the SM951 NVMe 256GB, it did recorded the top write performance. Additionally, our random workload recorded read and write activity at 1,308.38MB/s and 941.09MB/s, respectively, which moved down the rankings ever so slightly.

Moving to our smaller 4k random transfer benchmarks at QD1, the Samsung 950 Pro posted an incredible 52.80MB/s read and 175.41MB/s write, which just beat out the SM951 NVMe 256GB model. Results were mirrored when looking at IOPS throughput. In our server mixed-workloads (with a queue depth of ranging from 1 to 128), the Samsung 950 Pro recorded speeds that were either the fastest of all tested SSDs or just behind the SM951-NVMe for second place. Though the Samsung SM951 did place in the middle of the pack when we put it through our real-world benchmarks, the disparity between the drives were negligible at the most and it did record the top average latency in our HTPC, productivity, and gaming traces. Overall, Samsung’s new M.2 SSD packs a serious punch.

This drive has added a ton of flexibility and power to Samsung’s storage portfolio and is arguably one of the best M.2 drives that we’ve tested. Though this performance comes at a higher price tag than SATA SSDs, the drives are less expensive than the company’s other M.2 offerings, making their price-per-performance very desirable. We are certainly looking forward to seeing other Samsung products that leverage V-NAND technology in the near future.

The Samsung 950 Pro SSD is a terrific drive and a worthy addition to the company’s growing M.2 form factor portfolio. In addition, this SSD provides professionals and power users with a way to vastly improve their notebooks and workstations coupled with enterprise-grade reliability features.