The Seagate IronWolf SSD family was launched a few months ago near the end of April with the promise of improved reads and writes (and thus a longer life span) via the company’s Durawrite technology. We previously looked at the new IronWolf drive in a NAS environment with 8 samples of the 240GB SSDs in RAID 6. For this review, we are looking at a single 3.84TB capacity IronWolf 110 SSD within a server. As we mentioned in the previous review, the benefits of using SSDs in a NAS environment are significant if the cost, durability and capacity all match customer needs.

The Seagate IronWolf SSD family was launched a few months ago near the end of April with the promise of improved reads and writes (and thus a longer life span) via the company’s Durawrite technology. We previously looked at the new IronWolf drive in a NAS environment with 8 samples of the 240GB SSDs in RAID 6. For this review, we are looking at a single 3.84TB capacity IronWolf 110 SSD within a server. As we mentioned in the previous review, the benefits of using SSDs in a NAS environment are significant if the cost, durability and capacity all match customer needs. 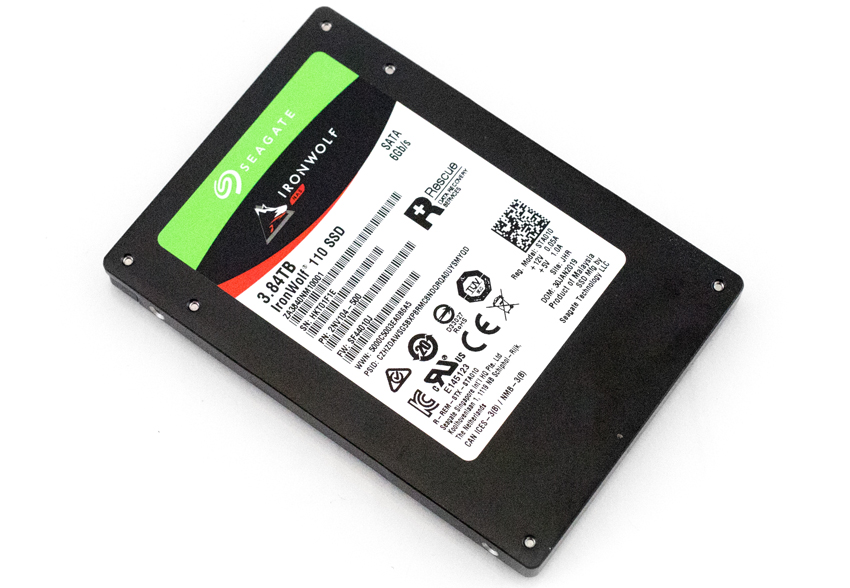 Seagate claims a maximum performance of up to 560MB/s read and 535MB/s write, and throughput up to 85,000 IOPS read and 60,000 IOPS write for the 3.48TB model. Available in 3.84TB, 1.92TB, 960GB, 480GB, and 240GB capacities, the IronWolf features an endurance rating of 7000TBW for the top capacity (it scales down to 438TBW for the 240GB drive). All of the IronWolf 110 SSDs are backed by a 5-year limited warranty, support IronWolf Health Management and come with two years of rescue data recovery services.

Our 3.84GB capacity IronWolf 110 SSD uses our  Lenovo ThinkSystem SR850 for application tests and a Dell PowerEdge R740xd for synthetic benchmarks. The ThinkSystem SR850 is a well-equipped quad-CPU platform, offering CPU power well in excess of what’s needed to stress high-performance local storage. Synthetic tests that don’t require a lot of CPU resources use the more traditional dual-processor server. In both cases, the intent is to showcase local storage in the best light possible that aligns with storage vendor maximum drive specs.

In order to understand the performance characteristics of enterprise storage devices, it is essential to model the infrastructure and the application workloads found in live-production environments. Our benchmarks are therefore the MySQL OLTP performance via SysBench and Microsoft SQL Server OLTP performance with a simulated TCP-C workload. For our application workloads, each drive will be running 2-4 identically configured VMs.

For our SQL Server transactional benchmark, the IronWolf 110 fell behind the rest of the drives, posting a total of 6,149.9 TPS for last place.

A better indication of SQL Server performance is latency compared to TPS. In this scenario, the IronWolf 110 found itself at the bottom of the pack by a large margin with 136.0ms in latency.

With the Sysbench transactional benchmark, the IronWolf had a showing of 1,803 TPS, which was just behind the Toshiba drive for second last place. 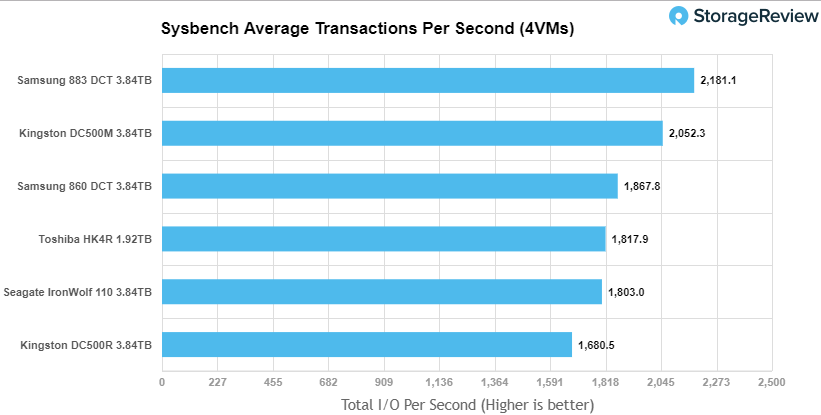 In sysbench average latency, the IronWolf trailed the Toshiba drive once again with 71.0ms. 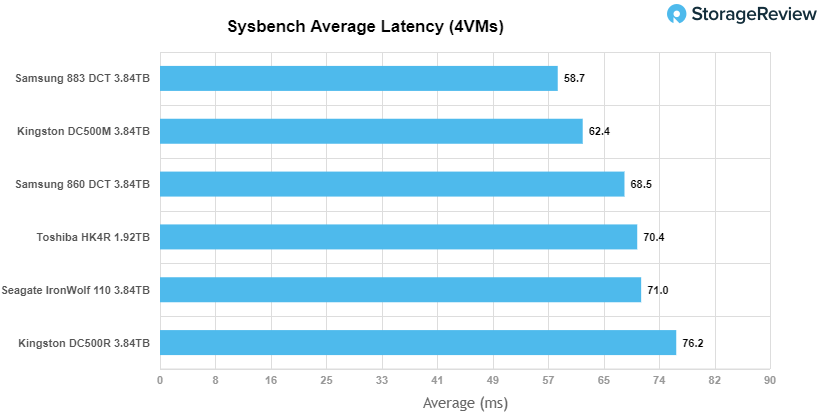 For our worst-case scenario latency (99thpercentile), IronWolf fell back into last place with 148.2ms in average latency. 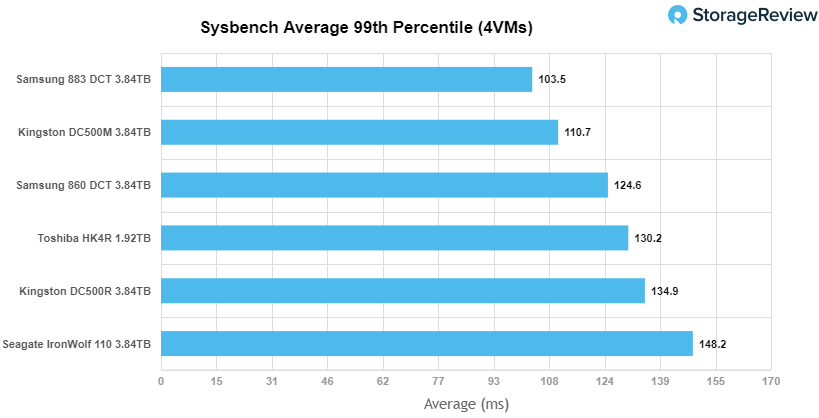 In our first VDBench Workload Analysis, Random 4K Read, the 110 SSD had virtually identical results when compared to the Seagate Nytro 1351. Here, the drive remained under 1ms latency until around 64,000 IOPS, then went out to peak at 68,411 IOPS.

With Random 4K writes, all of the drives had nearly identical results, posting a bit over 60,000 IOPS with a latency of 2ms.

With sequential writes, the IronWolf 110 maintained sub-millisecond latency until right at 12,000 IOPS or 365MB/s. The trend continues with the Ntyro, showing identical results.

Next, we move on to our SQL workloads, where the IronWolf 110 tied with the Nytro 1351 for second place in all three tests. Here, the 110 SSD had a peak performance of 43,120 IOPS while maintaining a sub-millisecond latency.

For SQL 90-10, the IronWolf 110 drive had a peak performance of 41,650 IOPS while, again, maintaining a sub-millisecond latency.

Moving on to Oracle workloads, the 110 held or fell insignificantly behind second place. Even still, it was able to maintain sub-millisecond latency in all three tests. For the first test, it had a peak performance of 37,946 IOPS with a latency of 915μs.

Next, we switched over to our VDI clone test, Full and Linked. For VDI Full Clone Boot, the 110 continued holding second, breaking sub-millisecond latency at around 25,000 IOPS, and going on to peak at 26,640 IOPS with a latency of 1.3ms.

VDI FC Initial Login saw the 110 fall back to third place. The drive maintained sub-millisecond latency at roughly 6,200 IOPS and went on to peak at 14,073 IOPS with a latency of 2.12ms.

Switching over to Linked Clone, the 110 fell back to fourth place in the boot test, breaking sub-millisecond latency at 12,000 IOPS and peaking at 13,330 IOPS with a latency of 1.19ms.

The fourth-place trend continued with VDI LC Initial Login, with the 110 holding breaking sub-millisecond latency at 6,100 IOPS and peaking at 7,648 IOPS with a latency of 1.04ms.

For our final test, we look at VDI LC Monday Login. Here, the 110 continued holding fourth place with a peak performance of 8,354 IOPS with a latency of 1.91ms. The drive had sub-millisecond latency until about 4,800 IOPS.

The Seagate IronWolf 110 SSD features DuraWrite technology, which helps to improve both performance and the lifespan of the SSD. The new Seagate drive also comes equipped with a power-loss data protection circuit, enterprise-class in-house SSD controller, and a SATA 6Gb/s interface for easy deployment. Ranging in capacities of 240GB to 3.84TB, the IronWolf 110 is backed by a 5-year warranty and 2 years of data recovery services.

Though the Seagate IronWolf 110 SSD is specifically designed for all-flash and tiering/caching enabled NAS use cases, it’s worthwhile to see how it performs as a single drive. As such, to test the 3.84TB SSD, we used our aforementioned enterprise SSD test environment for benchmarking. During our SQL and sysbench tests, it performed well below average. However, during our VDBench Workload Analysis, it performed extremely well, managing to hold second place throughout most of the tests. You may also have noticed a trend where the IronWolf 110 SSD results were virtually identical to the Seagate Nytro 1351 SSD in almost every test. That’s because the IronWolf 110 is based on that Nytro platform, with modest tweaks for the expected NAS environment.

Like the smaller capacity IronWolf SSDs, the larger units will be at home in NAS environments – this time where density is a critical decision factor. Either as part of a large flash pool, or perhaps in an all-flash NAS, the IronWolf drives offer a complete feature set with additional tools like IronWolf Health Management.