The new Seagate IronWolf HDD is designed for all types of NAS use cases, including those that leverage multi-RAID environments, with capacities spanning up to 10TB. Seagate has had a lot of success with their purpose-built drives in the past, such as the Seagate Enterprise, Seagate NAS, and Seagate SkyHawk Surveillance HDDs. And their new line is certainly specced to follow in their footsteps. Featuring multi-tier caching technology, this uniquely named drive is built to handle the constant vibration that is inherent in 24/7 NAS spindle drives and thrives under heavy user-workload rates in a high data-traffic network.

The new Seagate IronWolf HDD is designed for all types of NAS use cases, including those that leverage multi-RAID environments, with capacities spanning up to 10TB. Seagate has had a lot of success with their purpose-built drives in the past, such as the Seagate Enterprise, Seagate NAS, and Seagate SkyHawk Surveillance HDDs. And their new line is certainly specced to follow in their footsteps. Featuring multi-tier caching technology, this uniquely named drive is built to handle the constant vibration that is inherent in 24/7 NAS spindle drives and thrives under heavy user-workload rates in a high data-traffic network. 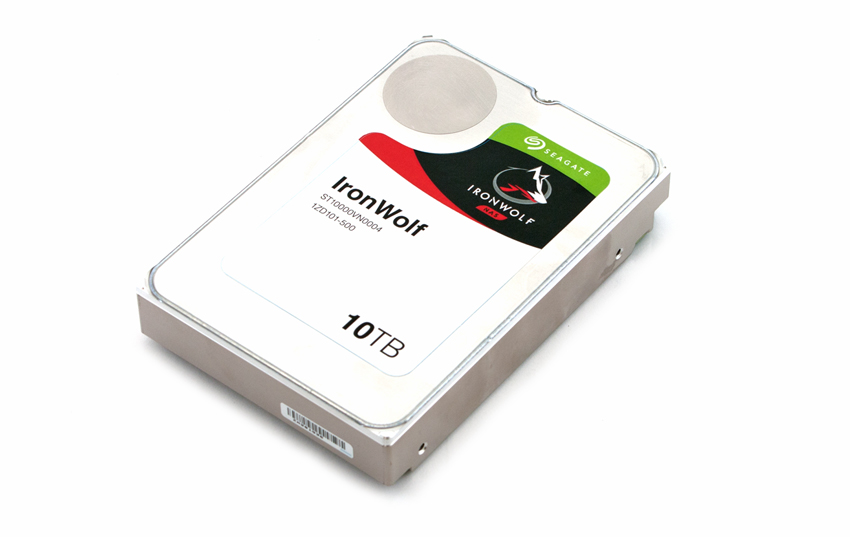 The IronWolf NAS HDD is based off of AgileArray, a technology that helps optimize the drive’s reliability and system agility. Seagate claims that it promotes drive balance due to its rotational vibration sensors, RAID optimization using error recovery control, and advanced power management to save on energy costs. In addition, the drives are rated for 180TB of data written per year on the IronWolf HDD. 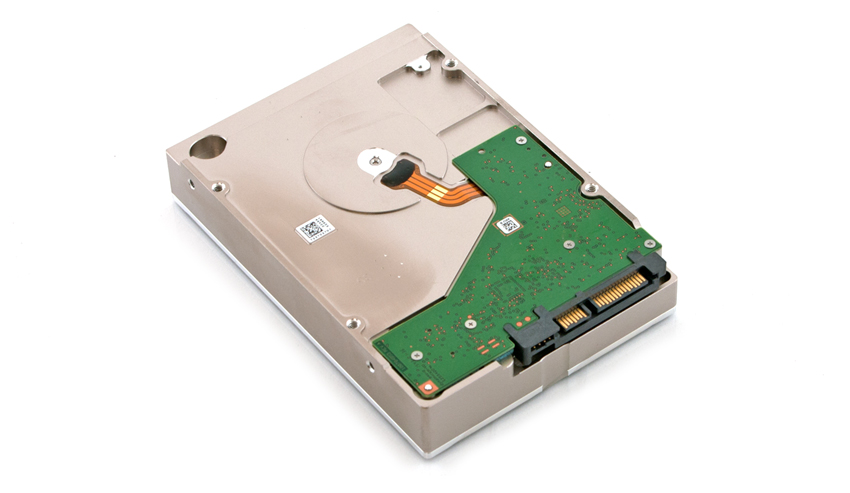 In the following section of this review, we will show the 10TB Seagate IronWolf’s performance in both iSCSI and CIFS configurations. Seagate supplied StorageReview with eight samples of their new NAS HDDs, which we configured in RAID10 in a Synology DiskStation DS1815+.

In our throughput test measuring 4K random performance (CIFS), the Seagate IronWolf NAS 10TB drive had the top best write activity with 2,427 IOPS. In reads, the IronWolf was just behind the Seagate Enterprise (8TB) for second place with 647 IOPS.

Results told a similar story with our iSCSI block-level test, as the IronWolf drive outperformed the other drives in both read (3,484 IOPS) and write (2,119 IOPS) activity.

When looking at a 16 Thread, 16 Queue, 100% read and write average latency benchmark configured in CIFS, the Seagate IronWolf showed a top-performing average write performance once again, with a latency of just 105.43ms. In average read latency, the new Seagate drive trailed its Enterprise NAS drive brethren (392.164ms), with a solid 395.56ms.

The IronWolf continued its impressive iSCSI block-level performance, as the Seagate 10TB drive recorded 120.79ms write and 73.457ms read, placing it at the very top of the leaderboard in both latency categories.

The IronWolf fared relatively well during our max latency tests (CIFS), with a read activity of 2,711.9ms and a write activity of 1,242.8ms. In writes, the drive trailed the Seagate Enterprise 6TB and WD Red Pro, while reads placed it a bit lower than the average.

During the same test, but using iSCSI, the Seagate IronWolf posted an impressive maximum write latency with 1,018.4ms. However, it was at the bottom of the leaderboard (by a significant margin) when it came to maximum read activity, posting 2,919.5ms.

In our standard deviation test, which shows us how consistent the latency results were within each of the 4K categories, the Seagate IronWolf recorded excellent write performance once again with 105.53ms in latency. In read activity, the new Seagate NAS HDD trailed both Enterprise drive capacities, though it posted a latency of 540.99ms.

Switching to the iSCSI block-level test, the 10TB Seagate IronWolf boasted the top write latency in standard deviation with 113.82ms; however, it fell to the lower part of the leaderboard in read activity with 116.56ms.

Our next test shifts focus from a pure 4K random read/write scenario to a mixed 8K 70/30 workload, where we will show how performance scales in a setting from 2T/2Q up to 16T/16Q. Here (CIFS), the Seagate IronWolf was one of the lowest performers with a maximum IOPS of just 453. It ended with 445 IOPS. 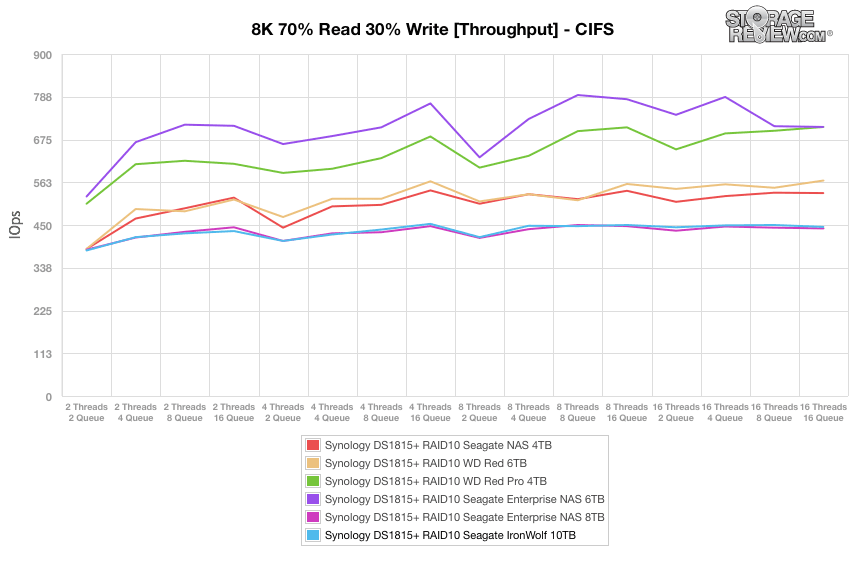 When configured in iSCSI, the IronWolf NAS HDD performed much better, as it recorded a decent finish of 1,921 IOPS. The top-performing drive here was the Seagate Enterprise 8TB with 2,256 IOPS. 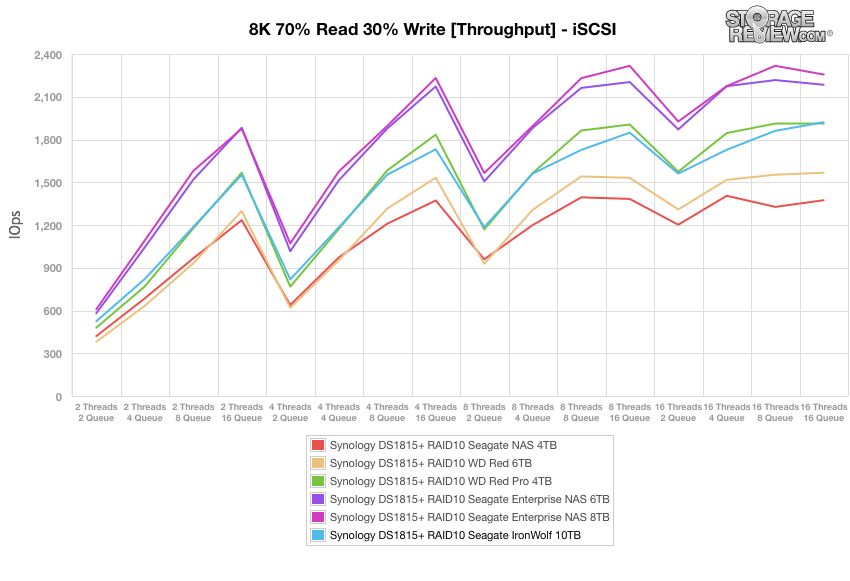 In our average latency test for mixed 8K 70/30 workload, the Seagate IronWolf showed to be one of the lower-performing drives during CIFS, with a significant spike in latency (573.02ms). 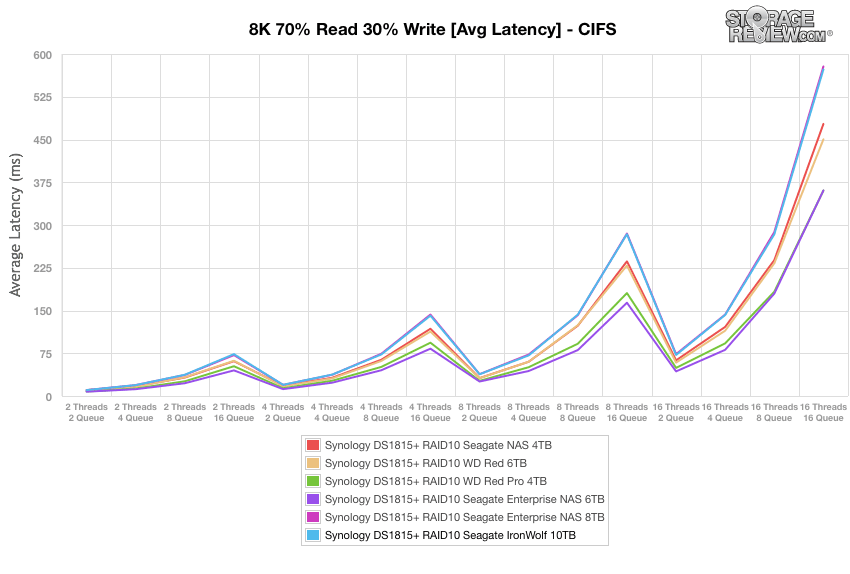 Unsurprisingly, the IronWolf drive performed much better during our iSCSI block-level test. Here, the Seagate drive posted an average latency of roughly 133.12ms by 16Q/16T, placing it in the middle of the pack. 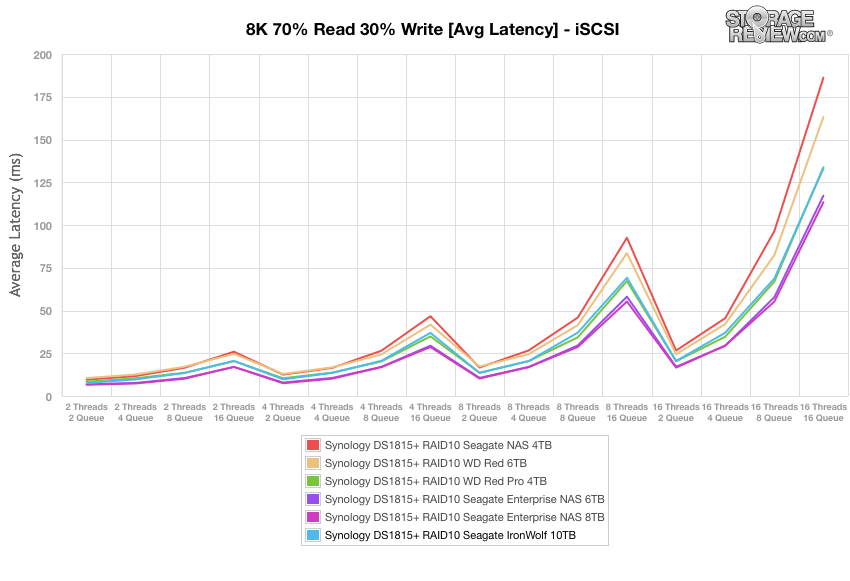 Looking at maximum latency in our CIFS test showed unstable results across the board, though the Seagate IronWolf held strong as one of the better-performing drives, finishing with 3,041.15ms. This was good enough for second place, just behind the 8TB Seagate Enterprise NAS HDD. As you can see below, both drives were the clear winners. 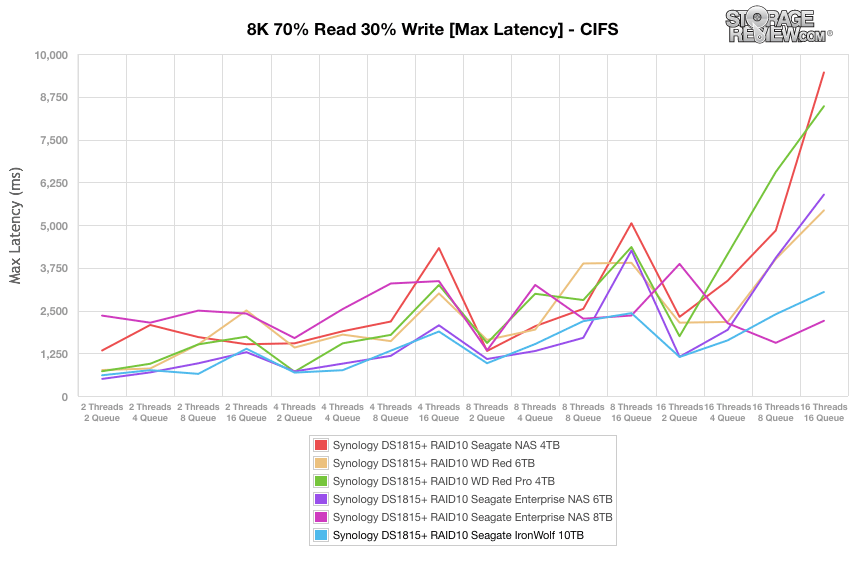 Results were much more unstable when looking at our iSCSI block-level test. However, the IronWolf HDD still finished off strong with a leading maximum latency of just 1,181.49ms. 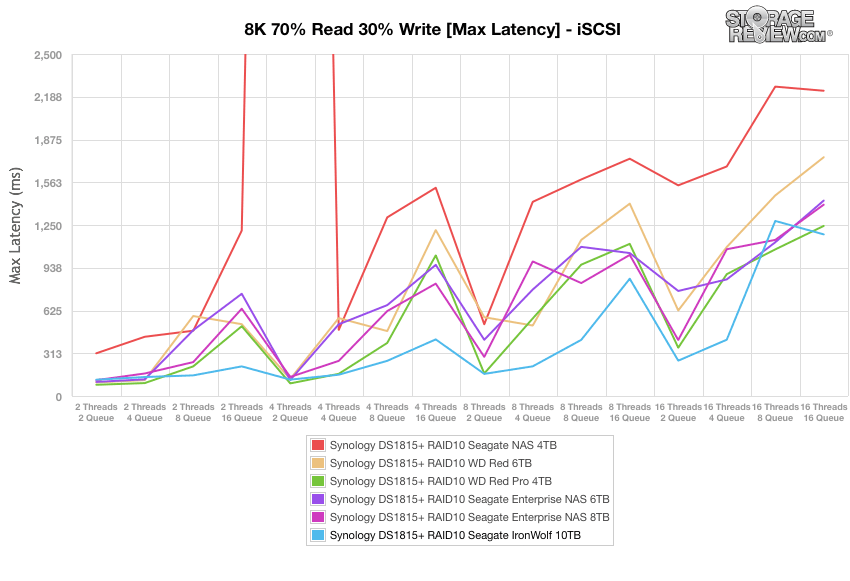 The standard deviation latency results for our 8K 70/30 benchmark shows the IronWolf as one of the better drives when configured in CIFS, with just 377.09ms. 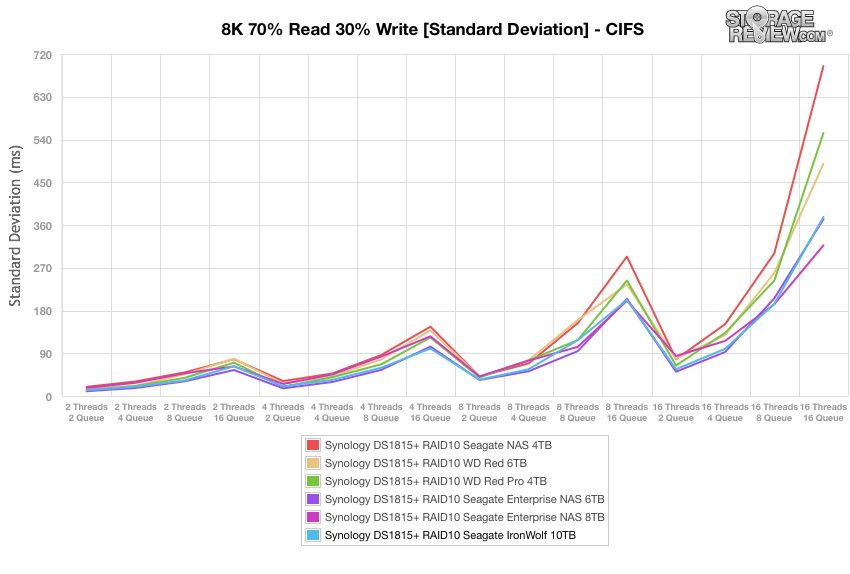 Results told a similar story when configured in iSCSI. Here, the Seagate IronWolf 10TB drive recorded just 377.09ms by the end, placing in second behind the Enterprise 8TB drive. 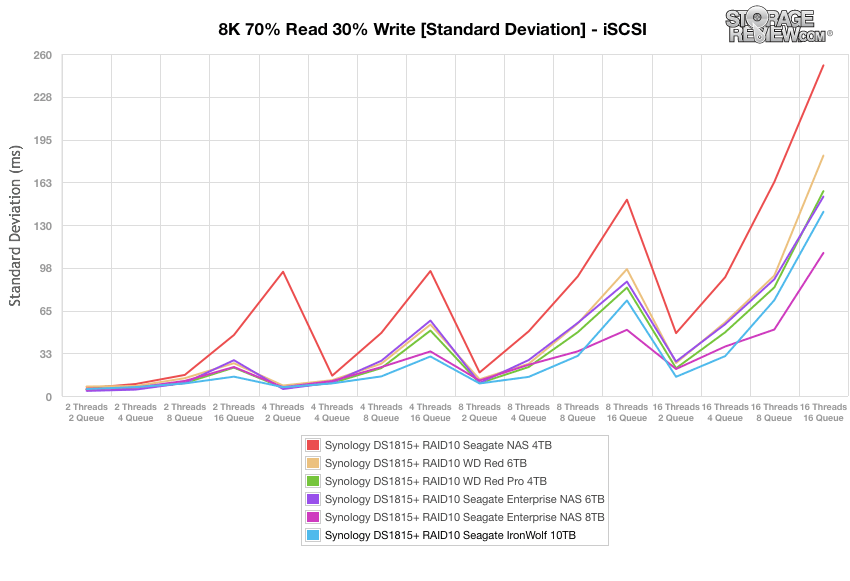 While the first part of the workload comparison focused on random-workload performance, our second half measures small- and large-block sequential transfer speeds. In our CIFS file-level test of the 8K 100% read/write benchmark, most of the drives posted similar results. Here, the IronWolf recorded a solid 57,132 IOPS read and 41,744 IOPS write, narrowly trailing just the Enterprise 8TB drive.

Switching gears to our iSCSI block-level test, the Seagate IronWolf posted write results with 17,529 IOPS, putting it in fourth. Read activity was much better, however, at 12,853 IOPS, placing it second among the pack. The Seagate Enterprise 8TB had the best performance by an incredibly large margin, more than doubling the IronWolf’s IOPS with 30,677.

Our last test is the 128K benchmark, which is a large-block sequential test that shows the highest sequential transfer speed. In CIFS, all tested drives posted nearly identical results across the board. Although the charts show the IronWolf HDD at the bottom with 462.53MB/s read and 437.97MB/s write, the discrepancy between the drives was fairly negligible.

In our iSCSI block-level test, results were a little more scattered. Here, the Seagate IronWolf posted 417.26MB/s read and 361.74MB/s write, placing it just behind the Enterprise as one of the clear leaders in this benchmark

The Seagate IronWolf 10TB is another solid addition to the company’s extensive portfolio of NAS HDDs. Sporting a 7.2K spindle speed, these reliable drives offer impressive longevity and are suitable for smaller NAS form factors up to 8-bays, such as the Synology DiskStation DS1815+. Seagate’s new NAS drive also comes equipped with AgileArray, an NAS-specific software. This technology helps optimize the drive’s reliability and system agility with its dual-plane balancing and RAID optimization in multi-bay environments, coupled with advanced power management features. All of these elements allow it to excel in 24-hour, 7-days-a-week operation. Though the company’s Rescue Data Recovery Service only comes standard in the Pro version of this line, it can be added on at an additional cost. This service allows users to recover from unplanned disasters such as RAID controller failure, power surges and natural elements. Seagate boldly claims that that most user data can be recovered at a 90% success rate.

To demonstrate how the Seagate IronWolf 10TB performs in a range of scenarios, we equipped the 8-bay Synology DS1815+ with 8 IronWolf drives. We also compared them to several other similar HDDs, such as the Seagate Enterprise NAS and the WD Red NAS drives. Though sometimes inconsistent, the Seagate IronWolf 10TB was easily one of the best overall drives. For example, during our 4K random performance benchmark in CIFS, the IronWolf drive had the top write activity with 2,427 IOPS, while reads hit with 647 IOPS, which was just behind the Seagate Enterprise (8TB) for second place. Results were similar when looking at our iSCSI block-level test, as the IronWolf drive outperformed the other drives in both read (3,484 IOPS) and write (2,119 IOPS) activity.

During our mixed 8K 70/30 workload benchmarks, the 10TB Seagate drive showed good performance during iSCSI, highlighted by 2,256 IOPS and 133.12ms in throughput and average latency, respectively. However, CIFS performance was at the bottom of the leaderboard in those categories.

During our 128K benchmark (a large block sequential test that shows the highest sequential transfer speed), all tested drives posted very similar results across the board in CIFS. Here, the IronWolf HDD recorded 462.53MB/s read and 437.97MB/s write. In our iSCSI block-level test, however, results were much more spread out. The Seagate IronWolf posted 417.26MB/s read and 361.74MB/s write, which placed it near the middle of the pack.

The IronWolf NAS HDD is a solid NAS drive that offers a ton of flexibility and reliability due to its maximum of 10TB in capacity and AgileArray technology.