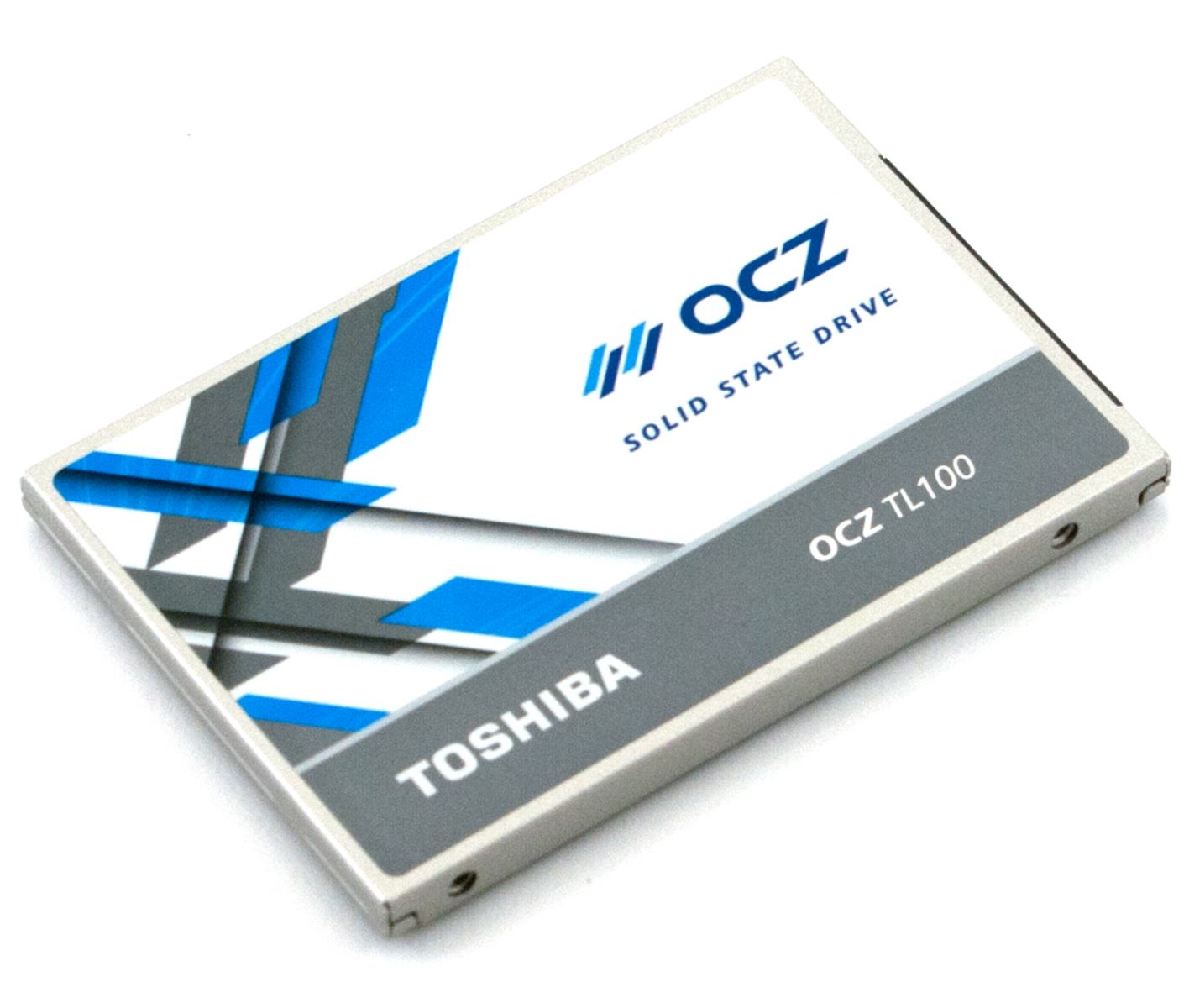 The Toshiba OCZ TL100 is an entry-level, budget-friendly SSD first announced in September. Toshiba is positioning the SSD as an HDD replacement and touting benefits one would expect from an SSD over HDD. This includes dramatic improvement in boot times and overall performance, with lower power consumption resulting in longer battery life. The TL100 uses Toshiba’s TLC NAND flash memory technology, and has one of the lowest suggested retail prices on the market for an SSD.

The Toshiba OCZ TL100 is an entry-level, budget-friendly SSD first announced in September. Toshiba is positioning the SSD as an HDD replacement and touting benefits one would expect from an SSD over HDD. This includes dramatic improvement in boot times and overall performance, with lower power consumption resulting in longer battery life. The TL100 uses Toshiba’s TLC NAND flash memory technology, and has one of the lowest suggested retail prices on the market for an SSD. 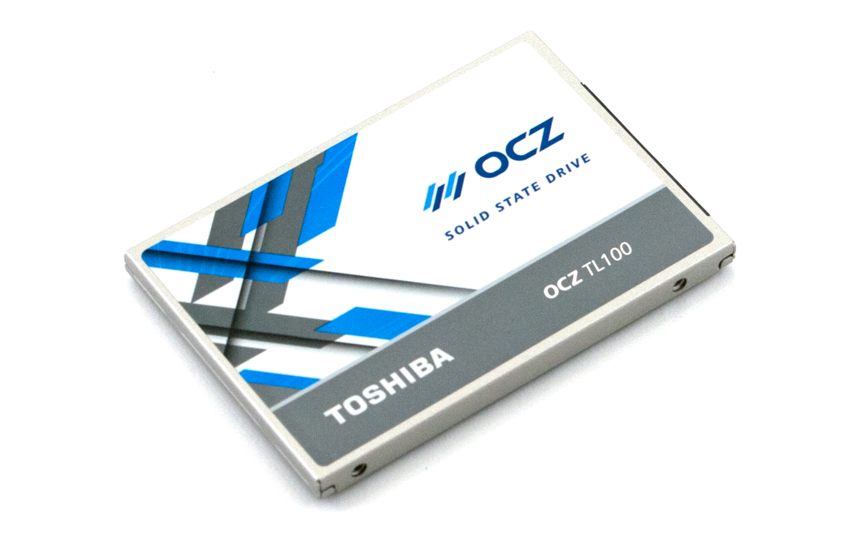 Toshiba is promoting the benefits of replacing an HDD with its new TL100 SSD instead of making claims against other value SSDs on the market. From a performance perspective, the company claims the TL100 can hit sequential reads up to 550MB/s and sequential writes up to 530MB/s. With random performance, the company is claiming the TL100 can hit 85K read and up to 80K IOPS write. The SSD comes in two capacities (120GB and 240GB) with total bytes written (TBW) of 30TB and 60TB, respectively.

The Toshiba OCZ TL100 SDD comes with a three-year warranty and starts for under $50 for the 120GB. Those who are interested can pick up the 240GB for about $68.

The Toshiba OCZ TL100 is a 2.5” SSD with a 7mm z-height and an aluminum case. The front of the drive has a sticker with the Toshiba OCZ branding. The rear of the case has another sticker with more information about the drive, such as capacity and model number. To open the drive up, one simply needs to pop the two parts of the case apart. The case is held together with tabs. On the top of the PCB, there are two NAND packs and a Toshiba controller. 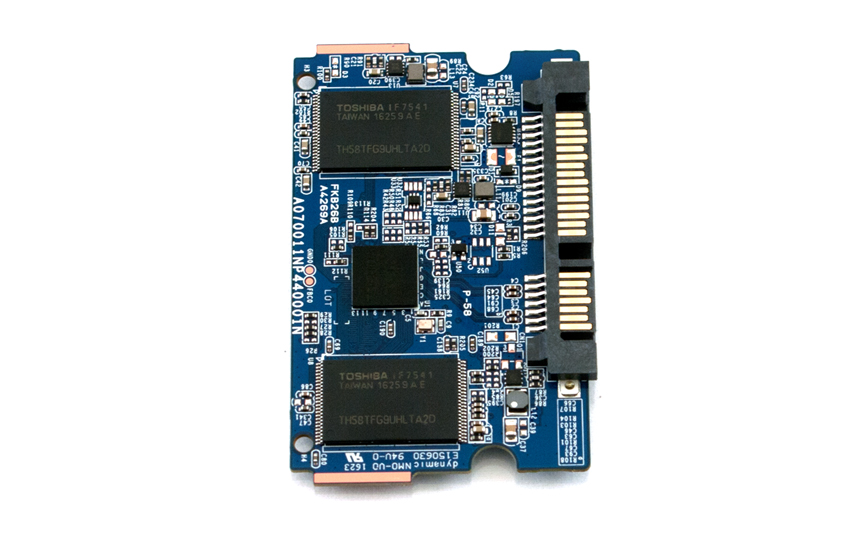 On the bottom of the PCB board, one can see two more NAND packs. 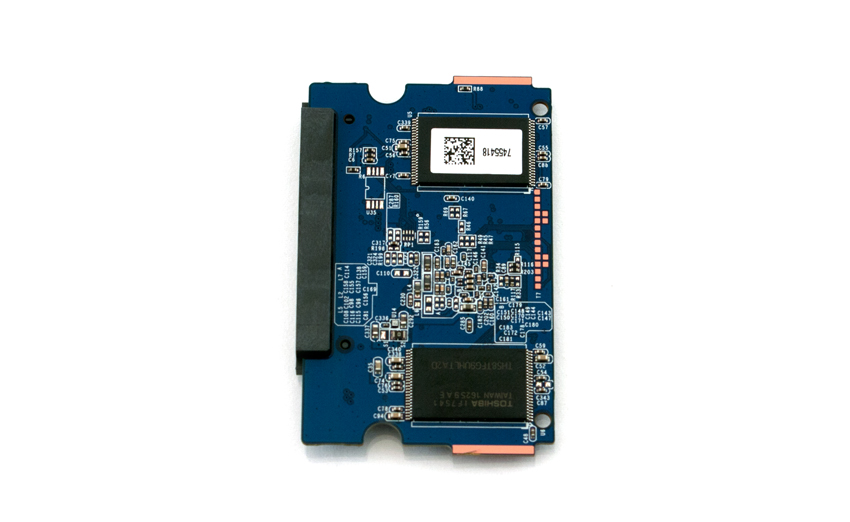 All consumer SSD benchmarks are conducted with the StorageReview HP Z640 Workstation. We compared the OCZ TL100 to the following drives:

Our first test measures 2MB sequential performance. The TL100 performed a little less than average with read speeds of 473.67MB/s, and though not terribly far behind the leaders, it did score near the bottom of the pack we tested. The drive did a bit better with a write speed of 440.38MB/s. With write, the drive performed slightly above median.

Moving to our 2MB random transfer performance, the TL100 showed similar placing, doing a bit better in placement with reads (414.12MB/s or sixth overall) and a bit lower with writes (304.77MB/s or fifth overall).

Switching to smaller 4K random transfers, the TL100 began to lag behind the other drives a bit farther. The TL100 gave us a read speed of 29.47MB/s and a write speed of 80.81MB/s. It wasn’t at the bottom of the pack in either score, but it was close.

When looking at 4K random throughput, the TL100 once again finds itself on the lower end of the scale with a write throughput of 20,687 IOPS and a read throughput of 7,545 IOPS. 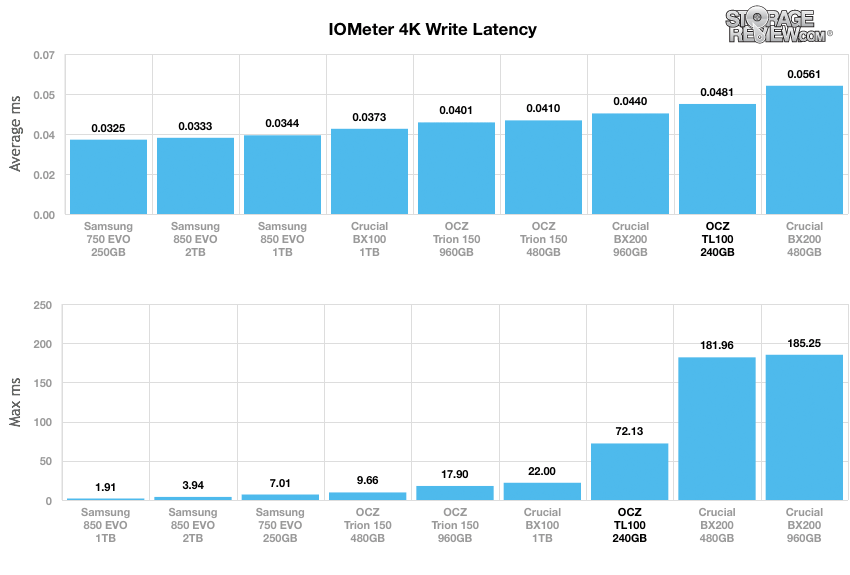 Our next test shifts to a workload with 100% write activity that scales from 1QD to 64QD. In this scenario, the TL100 finished about in the middle of the pack, peaking at about 72K IOPS before settling around 63K IOPS. Shifting focus to a 100% read activity, the TL100 gave a slightly better performance coming in fourth overall with around 84K IOPS. The database profile features a 67% read and 33% write workload, focusing on transfers around 8K in size. Here, the TL100 settled in near the bottom of the pack, finishing off around 27K IOPS. Our next benchmark is the read-only web-server profile, which uses transfer sizes ranging from 512 bytes to 512KB. In this scenario, the TL100 placed about the same as above, finishing around 18K IOPS. 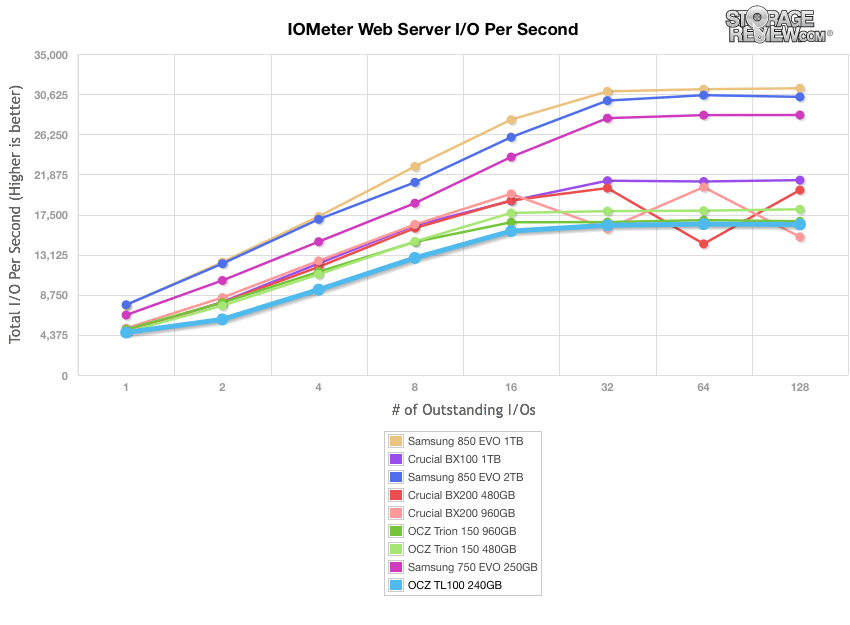 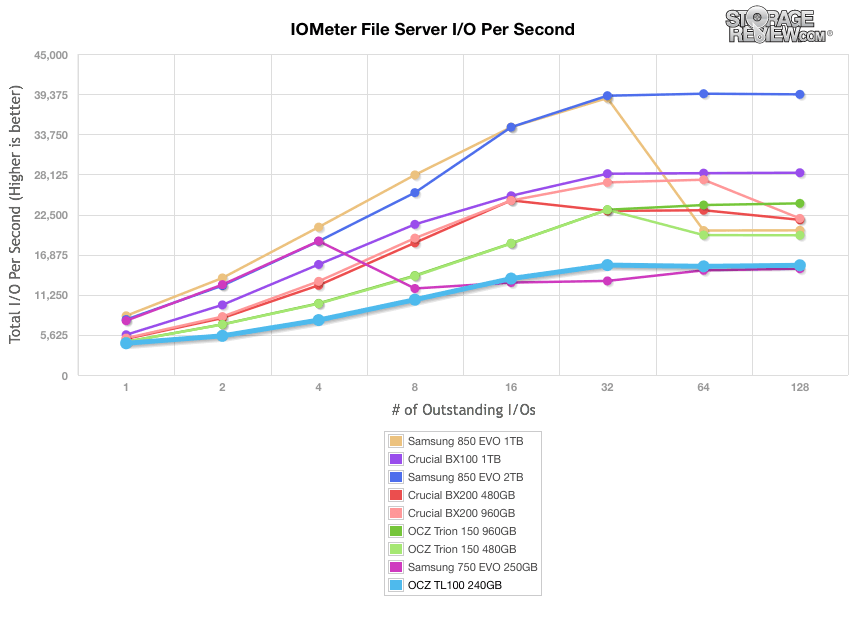 The last profile looks at workstation activity, with a 20% write and 80% read mixture using 8K transfers. Here the TL100 placed last by some margin. The drive started out and stayed last throughout the benchmark, finishing just under 19K. While the results of synthetic benchmarks are important in identifying the key strengths and weaknesses of a drive, performance in these tests does not always translate directly into real-world situations. To get a better idea how the Toshiba OCZ TL100 drive will handle itself in the field, we will chart StorageMark 2010 HTPC, Productivity, and Gaming traces against comparable drives. Higher IOPS and MB/s rates with lower latency times are preferred. With our productivity trace the TL100 results were not good. The drive scored 2,081 IOPS, 61.21MB/s, and a latency of 3.82ms. The next closest scores were twice as good in all three aspects. 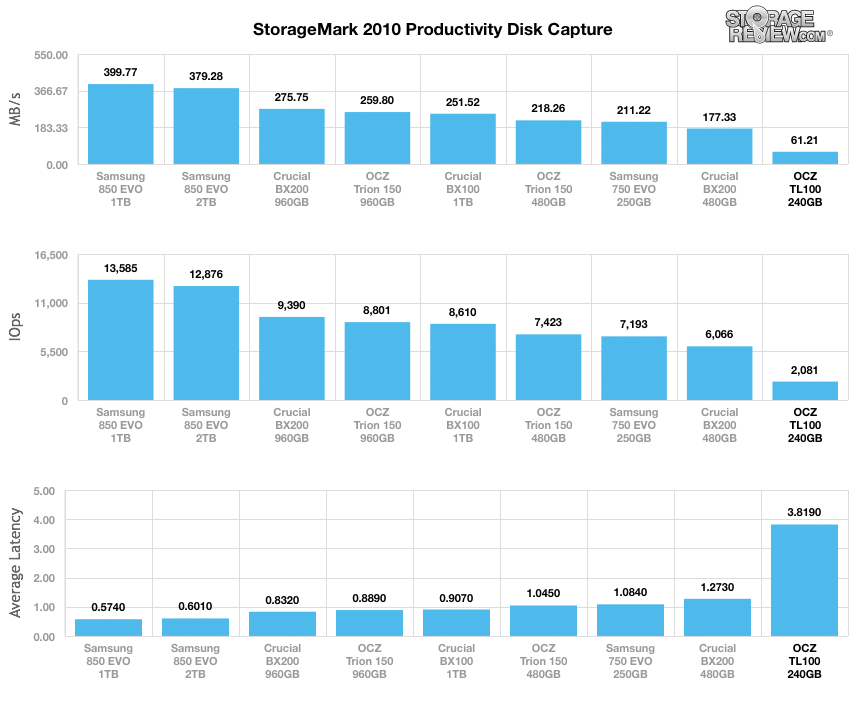 In our gaming benchmark, the TL100 again came in last place across the board, though there wasn’t such a vast difference in placement as there was with the productivity trace. Here the TL100 scored 5,432 IOPS, 289.37MB/s, and a latency of 1.415ms. The Toshiba OCZ TL100 is a value 2.5” SSD aimed pretty specifically at replacing HDDs. The drive comes in two capacities: 120GB and 240GB. Instead of marketing the drive against other value SSDs, Toshiba is highlighting the benefits of replacing an HDD with the TL100. The benefits are the usual suspects of faster boot times and overall performance, as well as lower power consumption and longer battery life for notebooks. An attractive feature of the drive is its MSRP of under $50 for the 120GB. This price makes the TL100 one of the cheaper SSDs on the market based on retail price.

While the above performance wasn’t terrific, the TL100 really fell on its face in our consumer real-world benchmarks. In all three tests the drive was at the bottom of the pack, and in our productivity trace, it was last by a wide margin. Scores were uncomfortably low to the point where we had to cross reference them against our past HDD and SSHD results to verify it was still faster. Again, we want to note that the drive is a cost-effective, HDD replacement that makes no real performance claims against other SSDs. With that said, outside of an incredible doorbuster sale, it doesn’t take much (about $5-15) to upgrade to a competing drive that offers substantially stronger real-world performance.

The Toshiba OCZ TL100 is a low-cost HDD replacement, though may not be the best choice for those looking for a big performance boost.