Seagate has expanded its Guardian Series of HDDs with even higher capacity version. On the NAS front, Seagate has taken both its IronWolf and IronWolf Pro and expanded the capacity up to 12TB per drive. The IronWolf Pro is designed specifically for use in NAS devices and is aimed toward creative professionals, SOHO, and SME markets. While both drives share many of the same features, the Pro version supports up to 16 drive bays, has a higher mean time between failures (1.2 million hours), has rotational vibration sensors on all capacities, and is better optimized for multi-users (300TB/year).

Seagate has expanded its Guardian Series of HDDs with even higher capacity version. On the NAS front, Seagate has taken both its IronWolf and IronWolf Pro and expanded the capacity up to 12TB per drive. The IronWolf Pro is designed specifically for use in NAS devices and is aimed toward creative professionals, SOHO, and SME markets. While both drives share many of the same features, the Pro version supports up to 16 drive bays, has a higher mean time between failures (1.2 million hours), has rotational vibration sensors on all capacities, and is better optimized for multi-users (300TB/year). 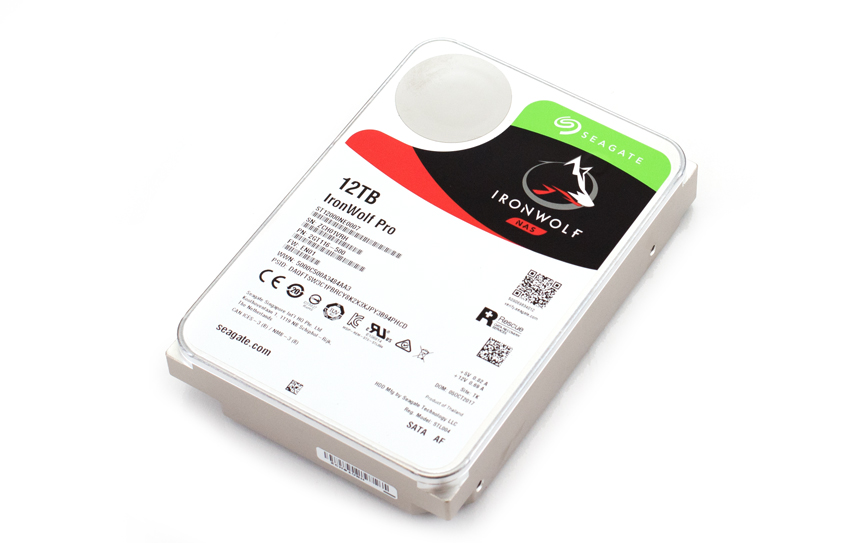 Aside from the upper capacity of 12TB (though the drive is still offered in smaller capacities), the new IronWolf Pro comes with several other features customers have come to expect with Seagate NAS drives. Based off of the proven AgileArray technology, the IronWolf Pro can run reliably in an always on, always working manner. The drive leverages rotational vibration sensors to aide in long-term consistent performance and reliability. The IronWolf Pro is optimized for RAID performance and power management. Like all Seagate drives, Rescue data recovery service can be used and comes 2-years free with the purchase of the IronWolf Pro. 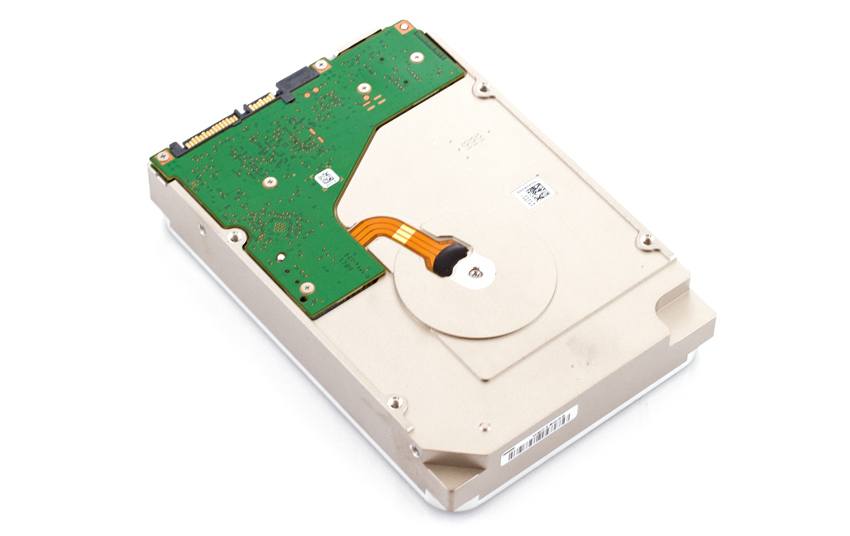 The Seagate IronWolf Pro HDD comes with a 5-year warranty and is available now for $475.

In the following section of this review, we will show the 12TB Seagate IronWol Pro’s performance in both iSCSI and CIFS configurations. Seagate supplied StorageReview with eight samples of their new NAS HDDs, which we configured in RAID6.

We will be including the following drives as comparables in the same NETGEAR 628x configuration:

In our throughput test measuring 4K random performance the Seagate IronWolf Pro landed second overall in iSCSI performance with 651 IOPS read (more or less tied with the non-Pro version’s 652 IOPS) and 631 IOPS write. For CIFS the Pro drive score first in reads with 317 IOPS and second in writes with 611 IOPS.

The next benchmark tests the drives under 100% read/write activity, but this time at 8k sequential throughput. The Seagate IronWolf Pro 12TB found itself in third place in iSCSI with 166,066 IOPS read and 55,250 IOPS write. In CIFS the drive hit 130,278 IOPS read and 42,668 IOPS write taking second.

Our next test shifts focus from a pure 8k sequential 100% read/write scenario to a mixed 8k 70/30 workload, where we will show how performance scales in a setting from 2T/2Q up to 16T/16Q. The two IronWolf drives did well competing for the top spot in iSCSI with the non-Pro pushing past the Pro by the end, 634 IOPS to 648 IOPS. CIFS was similar only the two drives were fighting for last place with the non-Pro barely taking it, 150 IOPS to 153 IOPS. 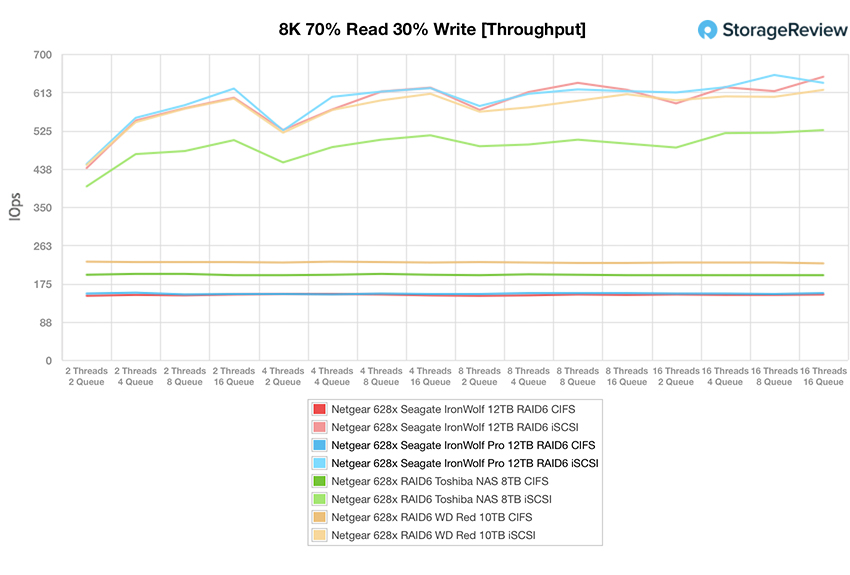 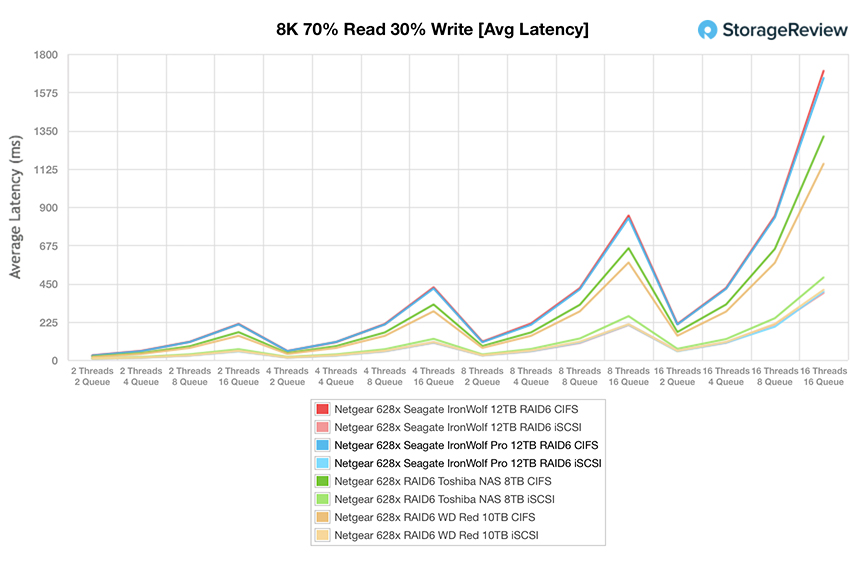 Max latency saw the Pro take third in iSCSI and second in CIFS. 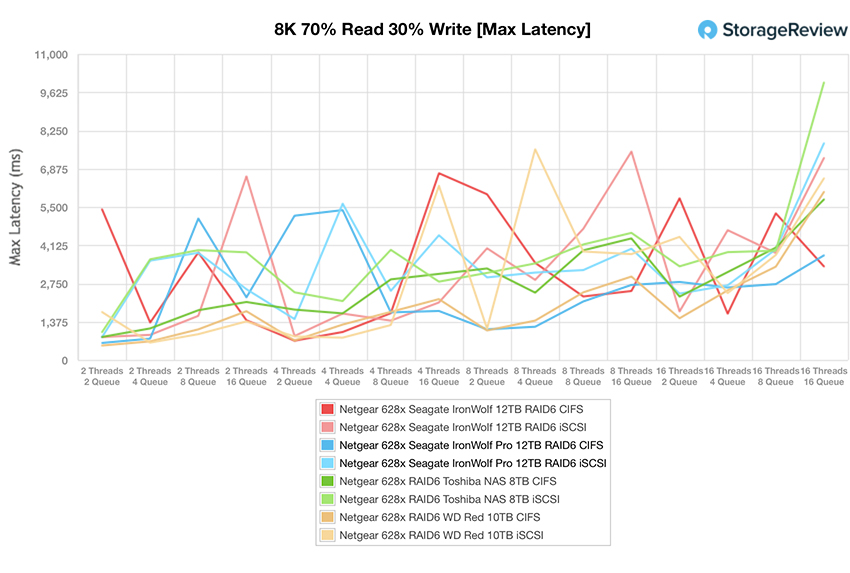 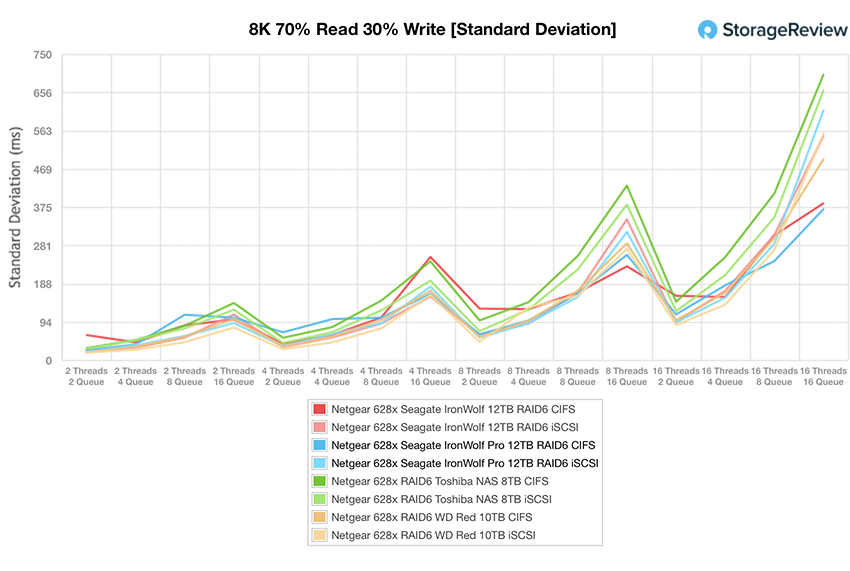 The Seagate IronWolf Pro is ideal for small businesses leveraging NAS devices. The drive comes with an impressive 12TB of capacity. Aside from being able to store more data, the drive also comes with AgileArray technology ensuring its availability, reliability, and RAID and power usage optimization. The Pro version offers several benefits over the non-Pro version such as the support for more drive bays, a longer mean time between failures, and better optimization for multi-users.

Looking at performance, we tested 8 IronWolf Pro 12TB drives in a NETGEAR 628x NAS. The drives performed well in most of our tests though the non-Pro version was able to beat it out a few times. In our 4k benchmarks the Pro was able to hit throughputs of 651 IOPS read and 631 IOPS write, in iSSCI, and an average latency of 392.41ms read and 416.22ms write (iSCSI). In our 8k 100% Read/Write the drive again had a strong iSCSI performance with 166K IOPS read and 55K IOPS write. And our 128k large block sequential benchmark showed the drive to have bandwidths of 2.3GB/s read and 1.18GB/s write CIFS and 1.85GB/s read and 1.13GB/s write iSCSI.

The Seagate IronWolf Pro 12TB is perfect for small to medium sized companies that want to increase their capacity while maintaining performance and not expanding their footprint.

Just posted a video of our latest Synology NAS in